My solo trip this year takes me to India where I will do a 22 day tour with a group called Intrepid. The name of the tour is North India Revealed.

The cheapest and most convenient flights left from Dulles Airport west of Washington DC and to get there I took the MARC train to Union Station and then Metro and bus to the airport. Apparently the Metro will finally reach the airport in 2019. 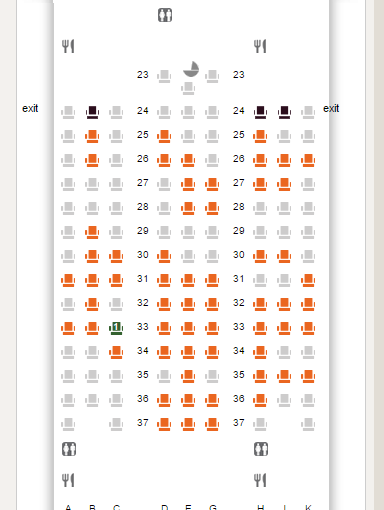 The modern sailing ship is a Boing 787 Dreamliner operated by Etihad. Since I usually do a few intercontinental trips each year, I have developed strategies for making the flight more comfortable. The main objective on 4 hour or more trips is to be able to get up and walk about when you want to without having to disturb anybody else. You need an aisle seat because of DVT and you may just want to go to the bathroom.

The next objective is to get the seat next to you free so that you have more room. Obviously if you can afford Business or First Class, skip all this drivel. However, if you are in the riff-raff section, the plane is usually less full towards the back of the plane. Since the center section of the plane is less desirable, I initially picked seat 33D, hoping that seat 33E would be free. When Marianne and I travel together, I pick seats on either side of the center section towards the back. In this case, seats 33 D and 33 F with 33 E hopefully unoccupied between us. It works about 50% of the time but it is wonderful if it does.

A couple of days before takeoff, I check to see what the seat situation is. This particular flight was not full and I saw I could move to seat 33 C. Seats 33 A and 33 B were unoccupied so there was a chance that my sheer presence in 33C would dissuade somebody from picking either of those seats.

So which side of the plane do I pick? If I have a chance at a window seat, I pick the side further from the equator since it is easier to see out of the window without the sun's glare. When I travel between hemispheres such as going to Australia, I pick the side where I get the best view when the sun is up. If you ever travel in the USA, pick the northern side. Trust me. 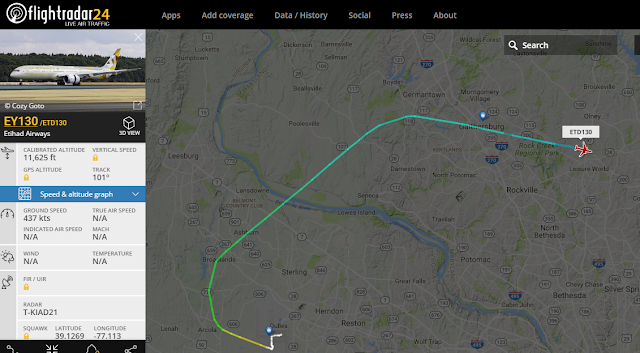 This is the plane from the previous night. It amazes me how you can check out any commercial plane in the world these days.

And below is the route the plane will be taking to Abu Dhabi where I will change planes to continue on to Delhi.

I was hoping to see something of the Mediterranean if I got a window seat. 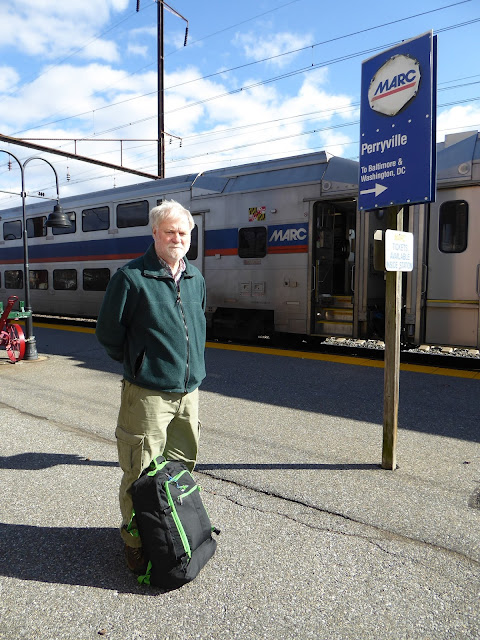 So here I am at Perryville Station about to take the train to Union Station in Washington. Notice my carry-on back-pack. The tour company, Intrepid asks you to use one rather than the normal roll-around.  I noticed in one of the reviews that one person thoroughly agreed with the recommendation, so I got one. 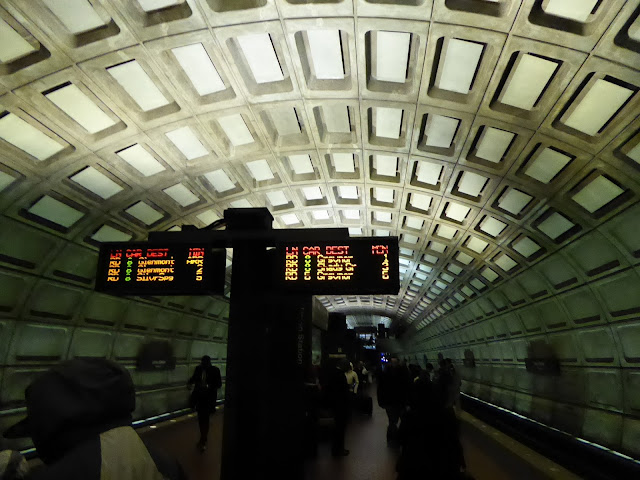 I got to Washington and took the Metro to Rosslyn and then bus 5 to the Airport. It was ok. The bus did a detour to a Park & Ride near Dulles and so the bus was loaded with commuters. Only three of us continued on to Dulles.

The plane was not full and I managed to get my three seats together. I took a melantonin pill and it worked for me since I got 5 hours of sleep. This article was interesting so I tried the melantonin for a couple of nights before the flight and it seemed to work with no side effects. 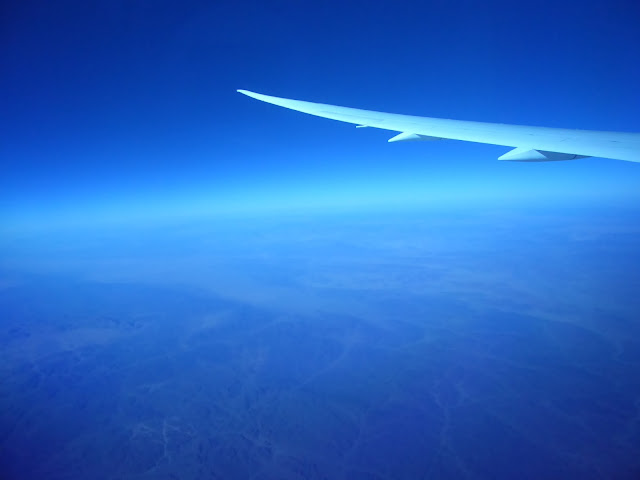 The wing of the 787 Dreamliner seems very long and thin. 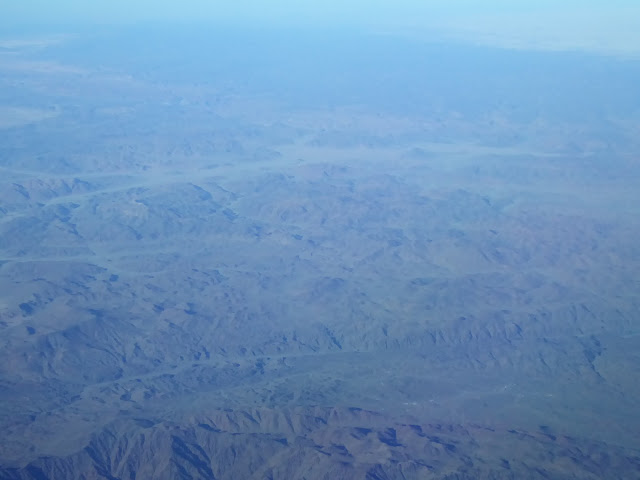 Saudi Arabia. Not the most photogenic. 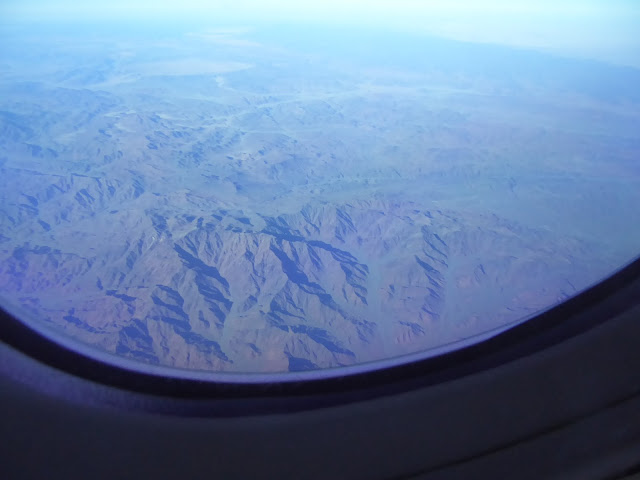 The windows on this plane are larger than normal and they have a tinting mechanism rather than a shade. I tried to adjust mine and it didn't really work. 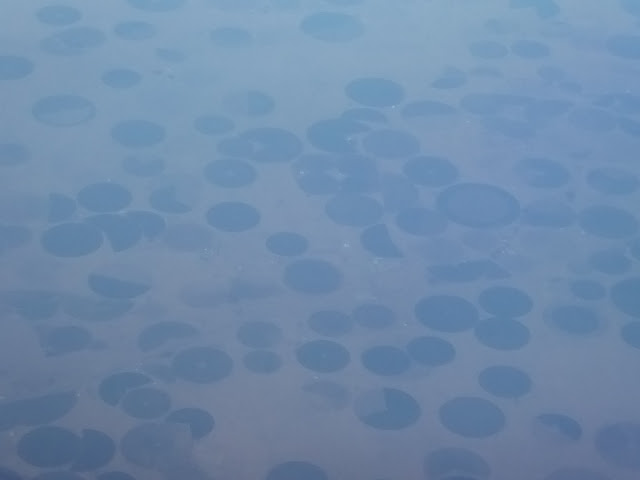 It was dark again as we landed in Abu Dhabi after the 12 hour flight which was pretty good for a long haul. The Etihad food was tasty and the attendants were friendly and helpful. I had to change terminals which involved a long walk that all seemed to be within duty-free shops. It's a huge airport and I have never seen so many of these shops.

The next three hour flight on an old 737 was less than memorable. I fell asleep right after the plane took off and was woken when the food appeared.

I had done my E-visa application a few weeks before and so at Delhi Airport I headed to the area where I lined up with the other foreigners. There were several booths open but it took a while to photograph and finger print each person. Eventually I got to the front of the line only to be told that I needed to fill in a form. The woman behind had not filled in one either.

Eventually I got through immigration and customs. I had decided to pamper myself and take the arranged driver into the hotel for $35. I got to the Arrivals Hall and some nicely dressed young man with an Intrepid sign called out to me. The back-pack was how he recognized me since I was looking for a sign with my name on it. He checked my name off a list and took me to a parking lot area where a car and driver appeared. This is not a drive I would want to do. Even at 5 am, it was bedlam with much horn honking. I noticed that the petrol gauge was virtually empty but we made it to the hotel. The driver made sure I got inside the hotel and that all was fine before he left.

I tried to use the ATM at the airport and it did not work.