Is it Wednesday or Thursday?

Is it Wednesday or Thursday? The question popped up into my mind yesterday as I took my constitutional walk down by the Elk River and to be honest, it didn’t matter to me that I didn’t know. The last time this happened to me was way back in ’74 when I was wandering around Europe for most of the year and I remembered that not knowing the day of the week disturbed me at the time. Not now.

A real sense of pleasure developed in my mind and the big beam reappeared on my face as I realized that I was starting to defeat ‘the cycle’. There were a number of things that were good about leaving Cecil and one was not having to remember the never ending cycle of events and due dates whether they be staff meetings, board meetings, reports due to the state, the budget and so on. Our lives are driven by these repetitive events and to be able to forget the timetable for a few hours was exhilarating.

Later that day as I looked out the window at the squirrels playfully chasing each other, I realized that it probably was mating season and nature loves cycles. Perhaps I still need the calendar.
Posted by Ray Perry at 8:08 AM No comments: 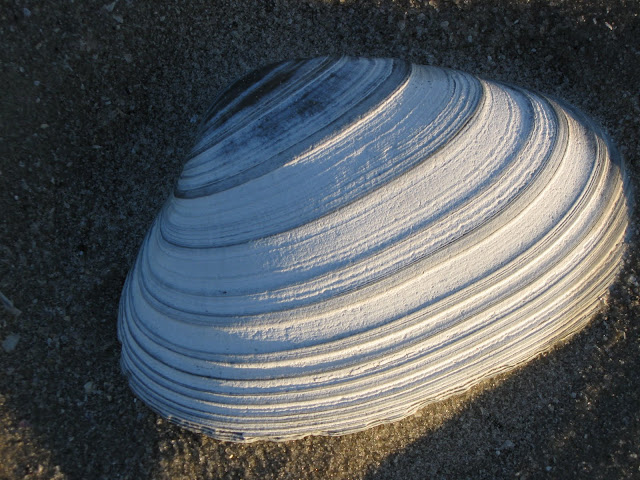 We needed to go to South Dennis in New Jersey for a few days so I managed to get Marianne out for a couple of walks. She needs to get in training for the dales of Yorkshire and the highlands of Scotland. First we went to the beach at Sea Isle City where Marianne grew up. 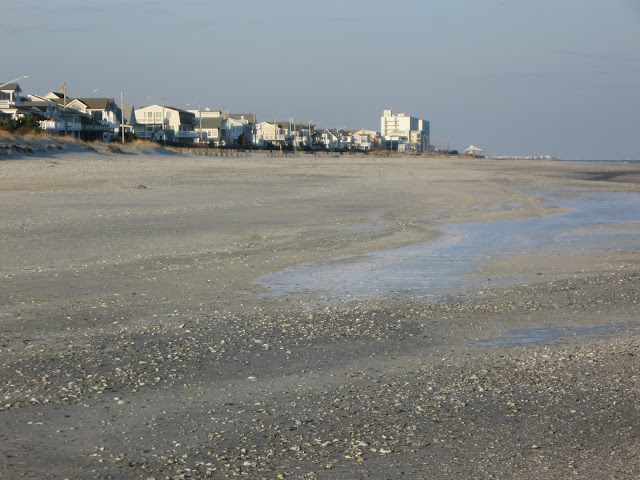 It was a cold windy day and the beach was pretty well deserted. Marianne says the locals hate the summer and really only enjoy the winter when all the shoobies are gone. 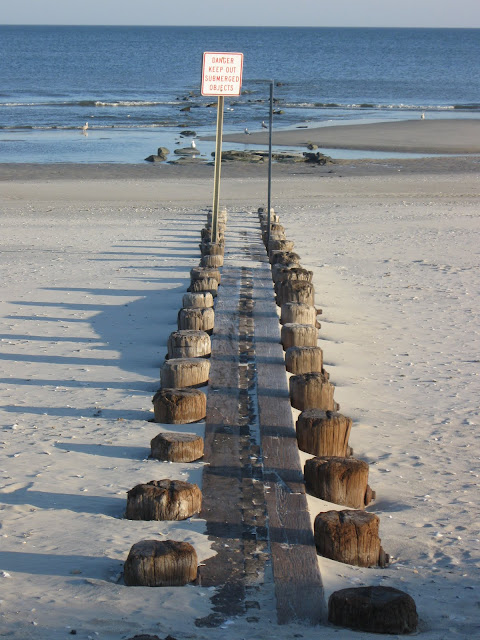 Fortunately the tide was out so after walking the length of the boardwalk we were able to come back on the sand without worrying about the waves. Waves is a bit of an optimistic word on the Jersey shore. Ripple riding is what I call it. 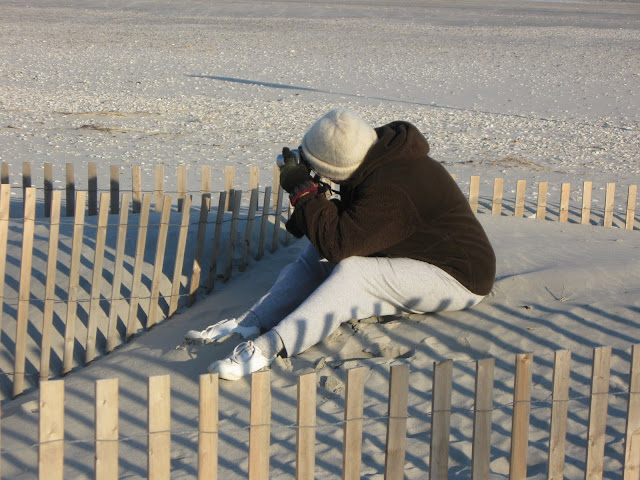 As you can see, Marianne really likes to get down to her work. 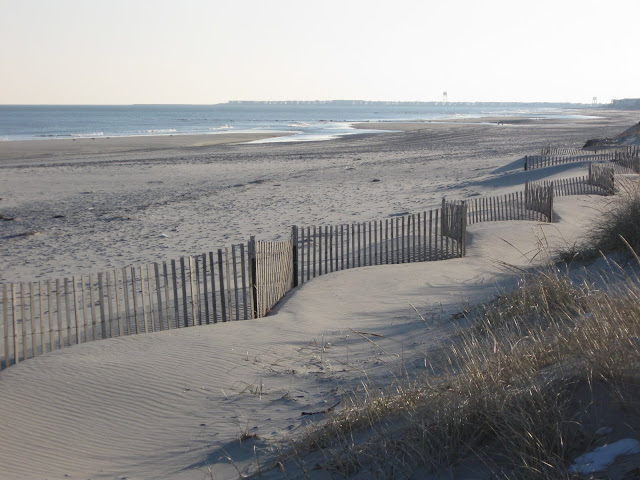 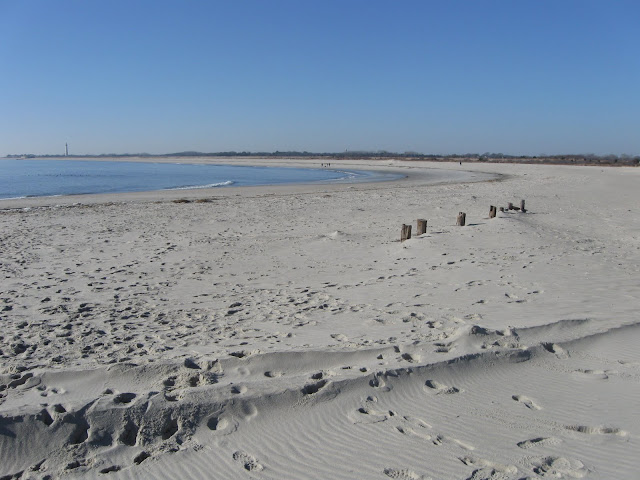 The following day we headed off for a longer walk at Cape May where we went from the western end of Beach Drive to the Cape May lighthouse. At three miles return, this was much further than the Sea Isle walk and guess what, somebody complained that this walk was too long and that she was feeling tired. 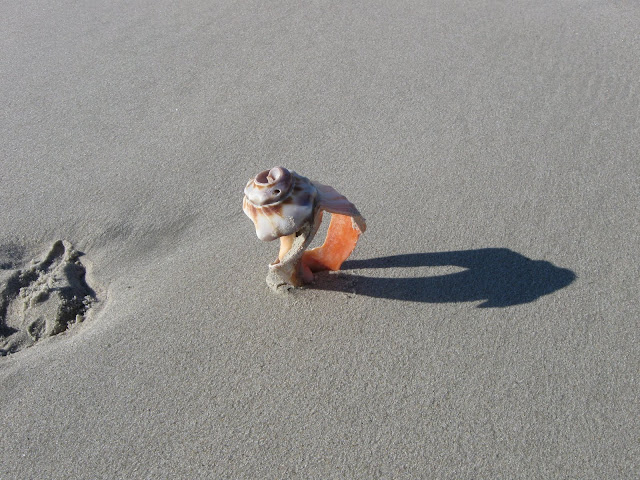 Still, it was warmer with less wind and some kind person had plonked this shell in an odd position which made for some interest. 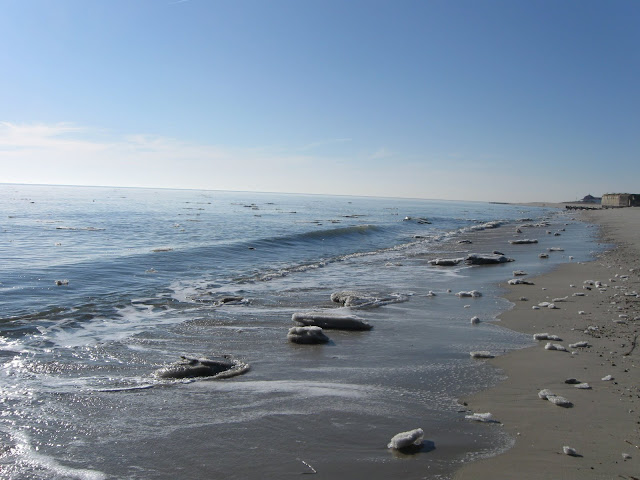 It was still pretty cold however and there were icebergs out there. Small icebergs to be sure, but remember most of the bulk is under water. Fortunately, there was no Titanic steaming by.

As I plodded along, I kept noticing a strange building off in the distance and finally I realized it was some sort of fort. And I was right! It was a fort left over from WW2 and to give you some idea of the gradual sea encroachment, it used to be 900 feet inland. 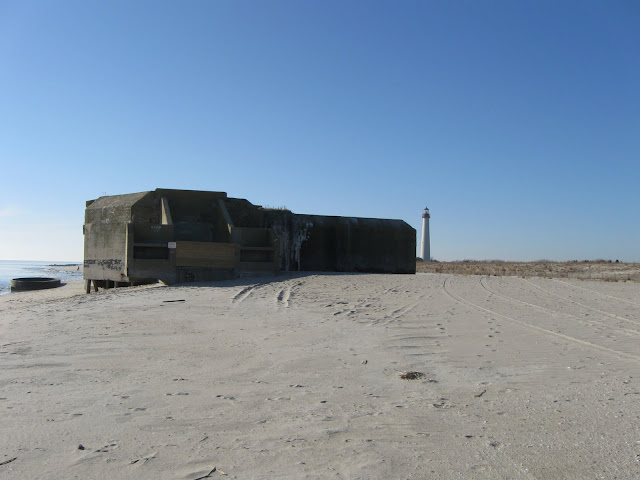 If you read the link above, you will see that it was part of a series of towers and bunkers known as Fort Miles. It had two 6 inch guns and the remains of one of the turrets is to the left. 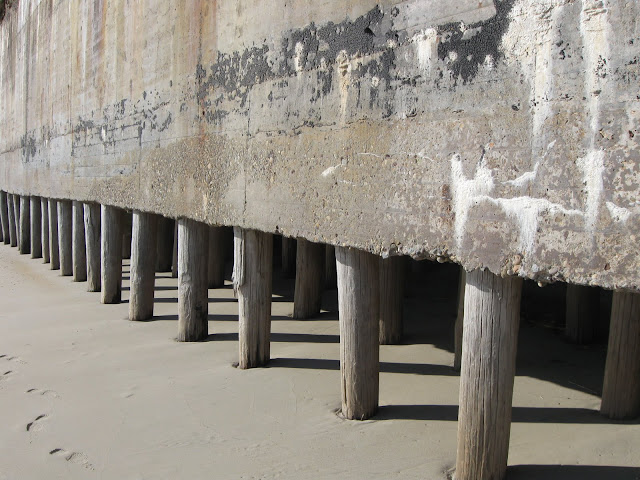 Currently, the pilings are still holding it up, but nature will win in the end. Eventually it must disappear. 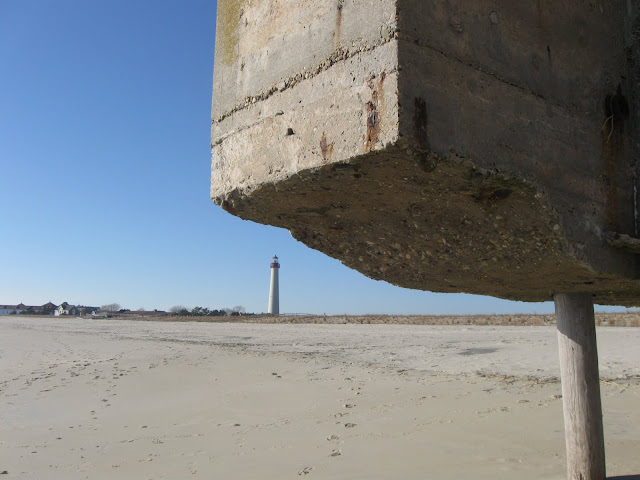 No doubt there were a bunch of blokes stationed there during the war who would have been on constant lookout for the German submarines just off the coast. The fort overlooks the entrance to the Delaware bay so it would have been good hunting if you were in a sub. 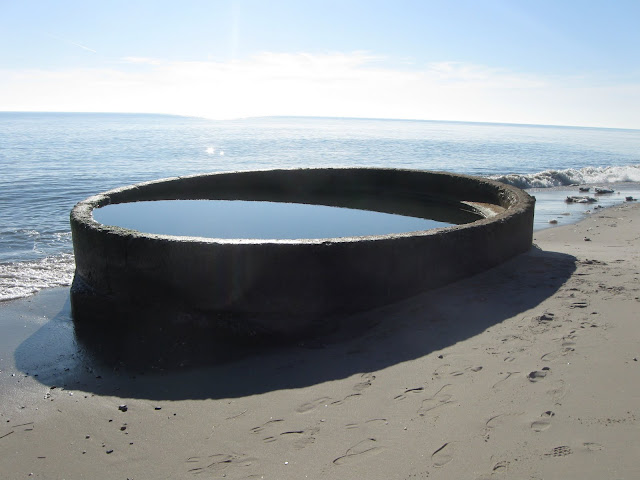 I wouldn't be too surprised if the old turret acts as a swimming pool in summer. 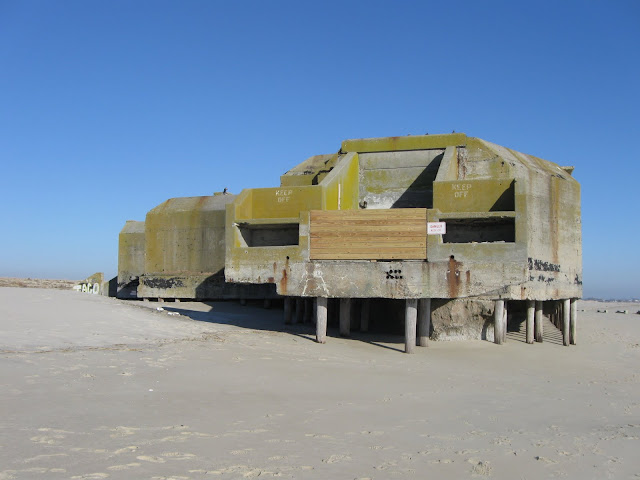 I was reading on some other web sites that the whole structure is now often in the water at high tide. 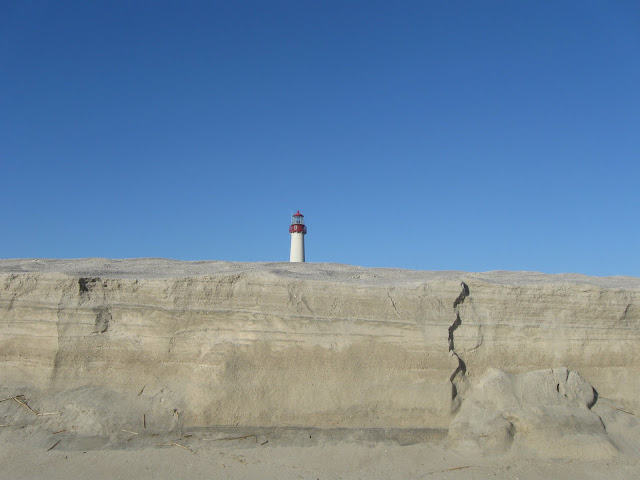 It's just an optical illusion. The 'cliff' is only two feet high. If it were real, it would be the highest point in New Jersey. 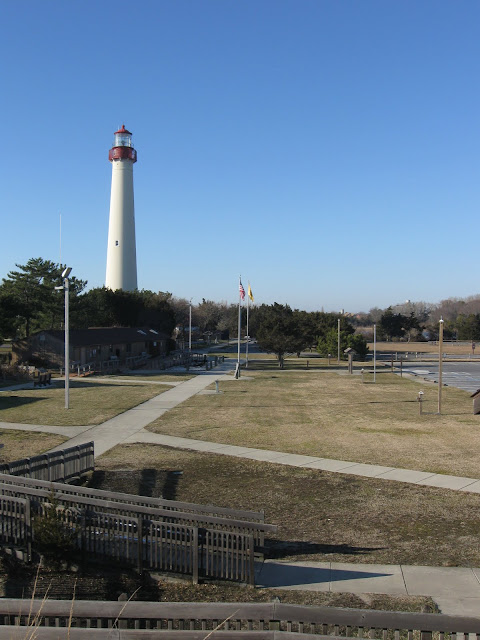 And so finally to the lighthouse where there is also supposed to be a bird sanctuary. The birds were sensible and had gone south for the winter.
Posted by Ray Perry at 5:36 AM No comments:

The first morning of retirement

The initial plan was to sleep in till about 9am but I was awake at 7am and ready to get up and go so off we went for a walk. There had been about a quarter inch of snow overnight and all was quiet with just a slight breeze. It was cold of course, about 24 degrees, but not too bad. 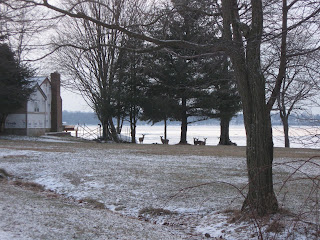 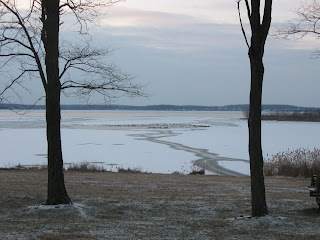 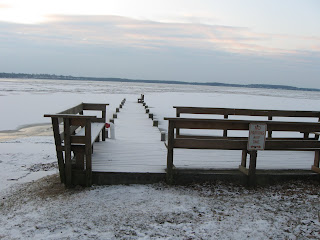 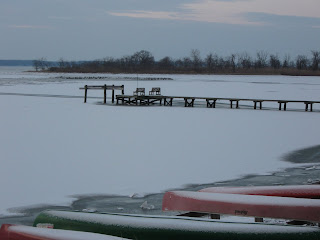 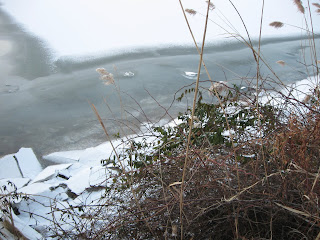 The bay has been frozen over for a few weeks now with all the sub freezing weather. The layer of snow on top of the ice made for some interesting patterns. 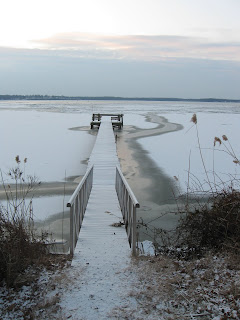 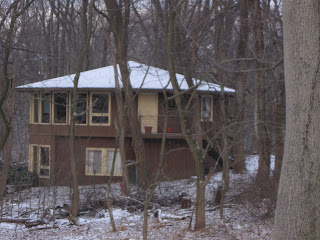 And so back to our house for breakky and a cup of coffee. Retirement is looking good at the top of the bay.
I can be reached at my gmail account rperry13