Fortunately I brought my daughter up the right way and taught her to like Vegemite. Here is a recent attempt to make Vegemite Scrolls or Cheesymite Scrolls as they are called in Oz.

First, obtain some Vegemite. Planes leave for Australia every day, but there are places in the US that stock the stuff.

Second, defrost a sheet of puff pastry and while you are doing that, get the oven heating to about 400 degrees. 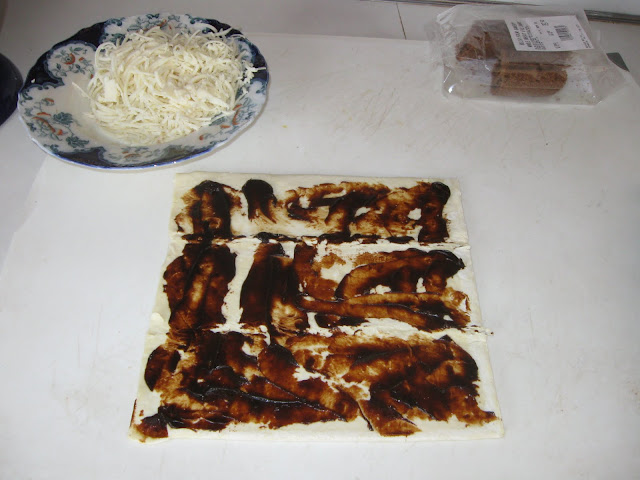 Slather some Vegemite onto the puff pastry. If you are economical with the spread, the taste of Vegemite will be less. Some would say this is a good thing. I prefer lashings of the stuff. 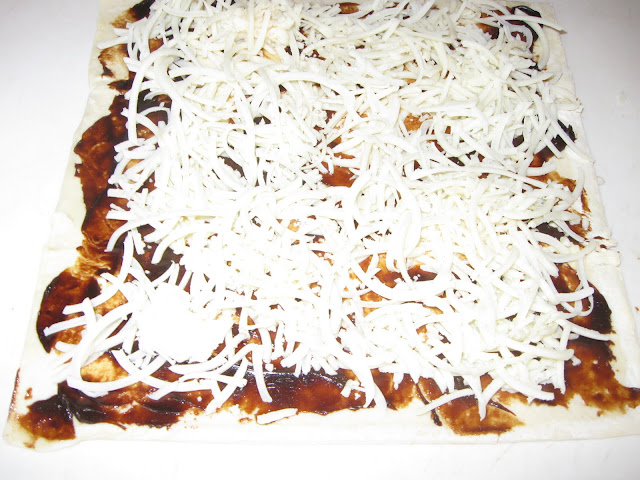 Now add grated cheese. I used Monterey Jack because it was available. Cheddar would be good. 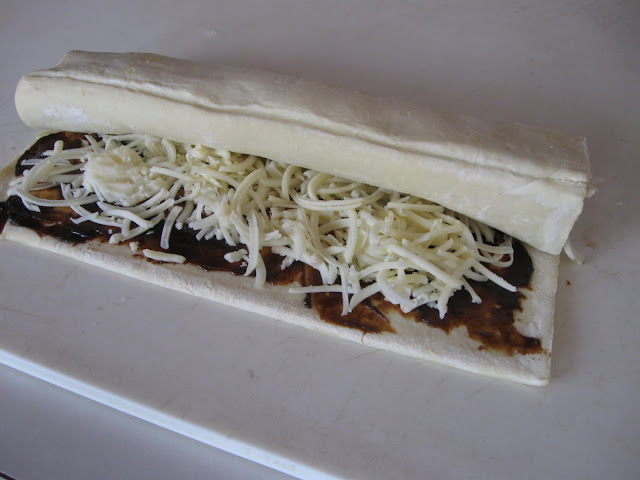 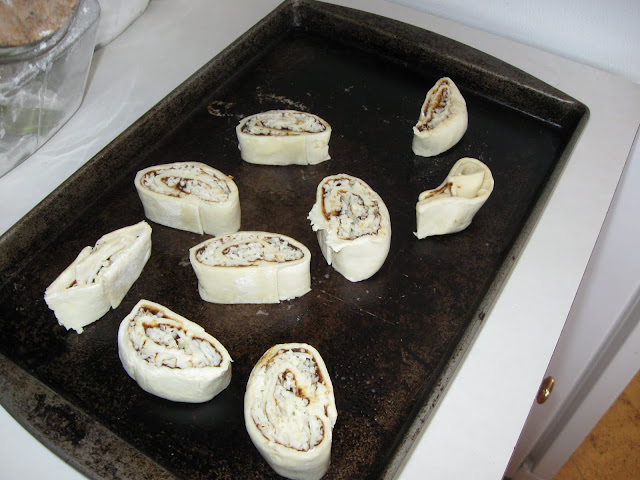 Cut into slices and place on a greased tray. Bung in pre-heated oven. 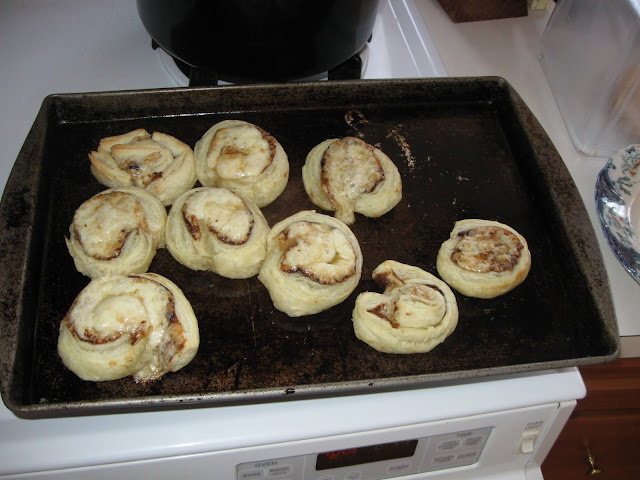 When they look done enough, bring them out and start enjoying if you like the taste of Vegemite, or throwing up if you find the taste revolting.
Then go out and shovel the snow to clear the way to your mail box. 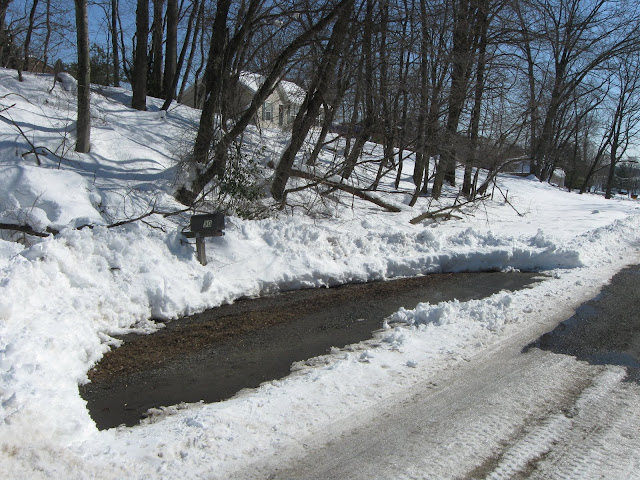 Actually there are a lot of similar recipes that use puff pastry and cheese and are rolled up. I'm sure you could think of something to add to the mix. Minced cane toad would probably be a oncer. 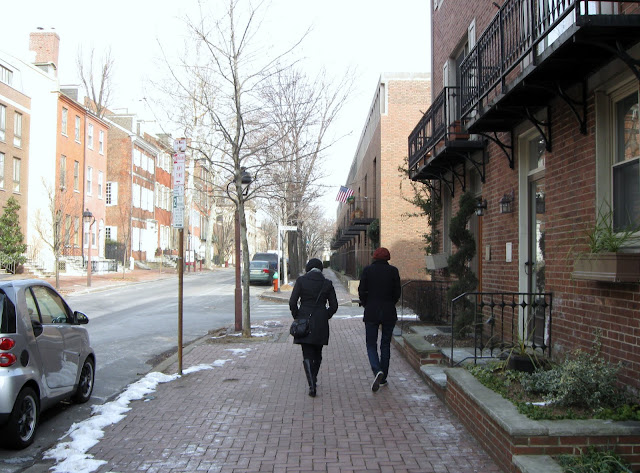 For years we have been staying at the Moore's place when we have been in Brisbane. Geoff came for a visit last Thanksgiving and now the older daughter, Rebecca has turned up. We had already planned to go to Philly for Marianne's birthday so we took Rebecca along. So on a cold Tuesday, we drove up. Above you can see Rebecca and Robin striding on ahead. 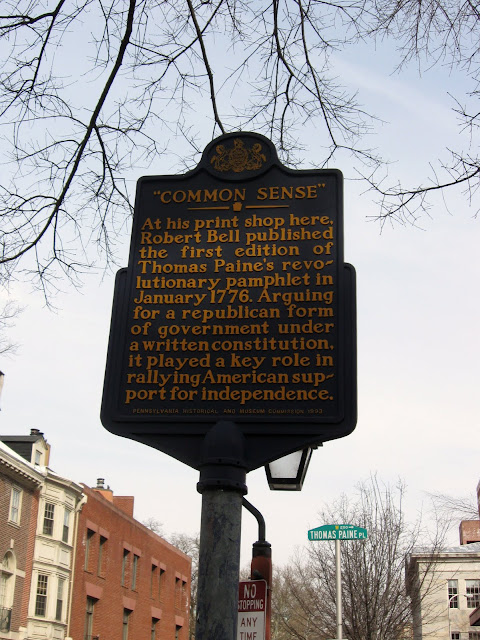 There's lots of interesting stuff to see in the back blocks of Philly. Signs like this abound, but the reality of what is left is sometimes just a parking lot. 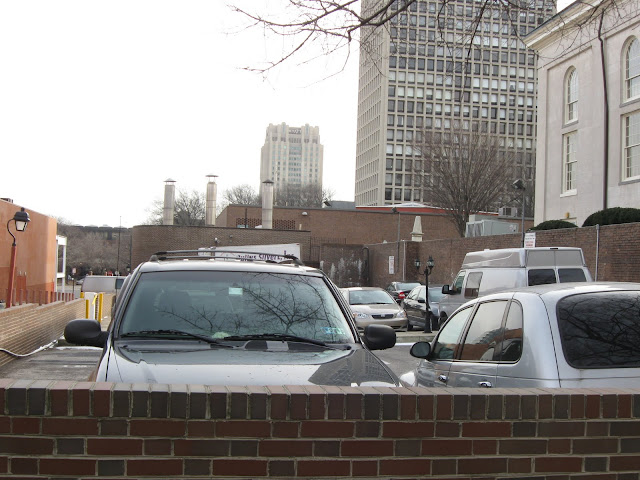 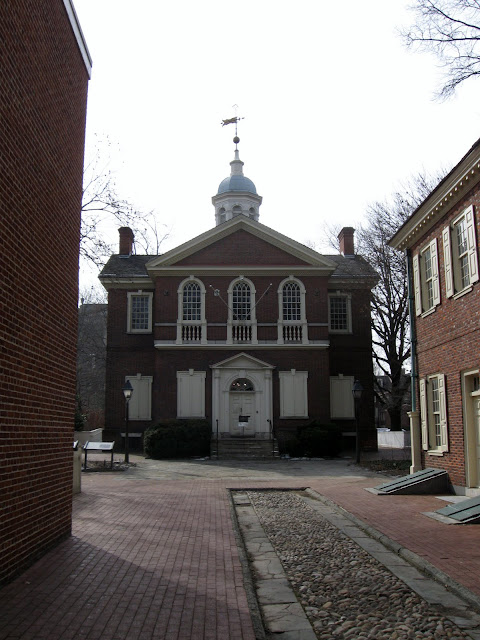 Carpenter's Hall was closed on the Tuesday, so we toddled along to Independence Hall. Life has changed, it used to be you could just walk up to it, but now it is all surrounded by chains and guards and you have to go through security to get in. 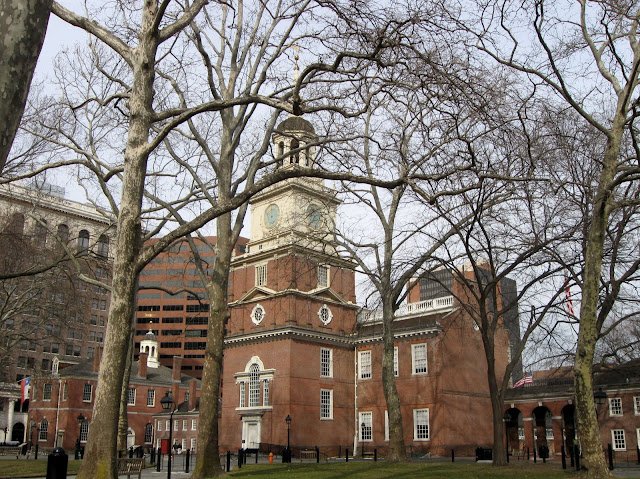 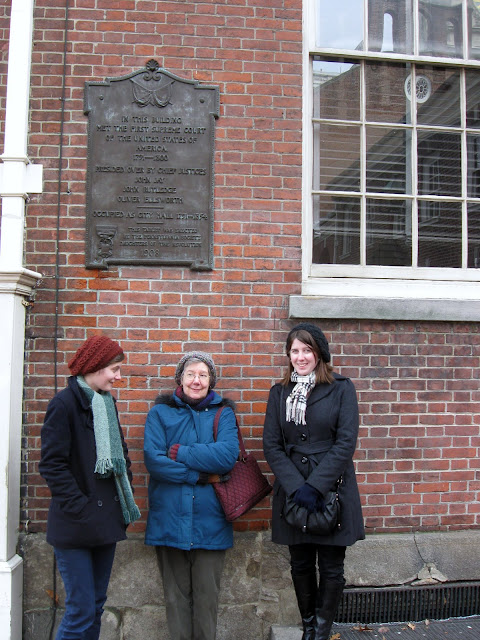 A fire alarm had gone off so we had to hang around waiting to get inside which definitely was not a pleasant thing to do when it is so cold. I pitied the poor Park Ranger who was standing around with his backpack waiting to answer questions. 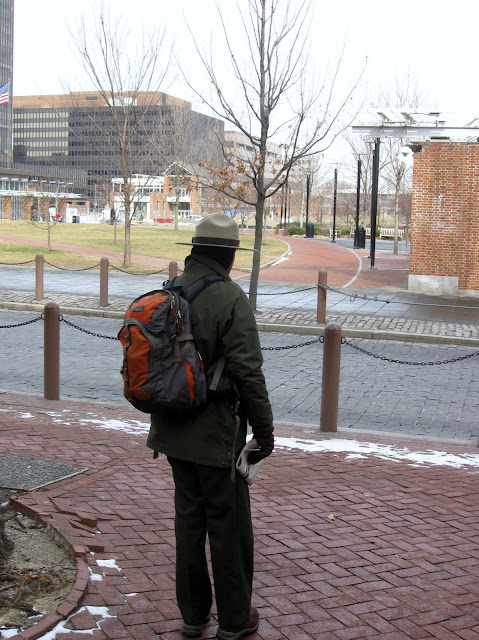 But of course, lots of people have hung around the front of Independence Hall, including Abraham Lincoln. 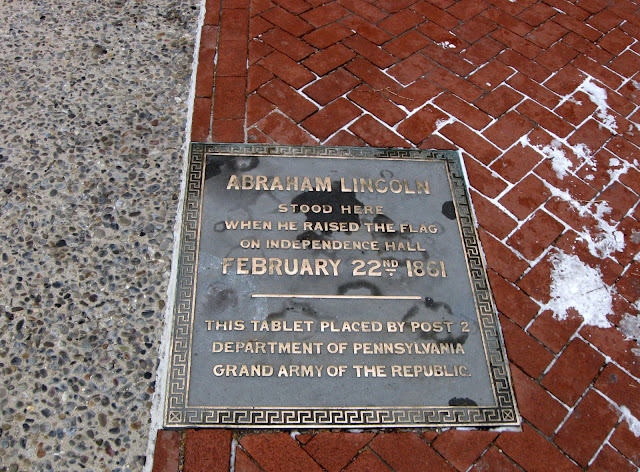 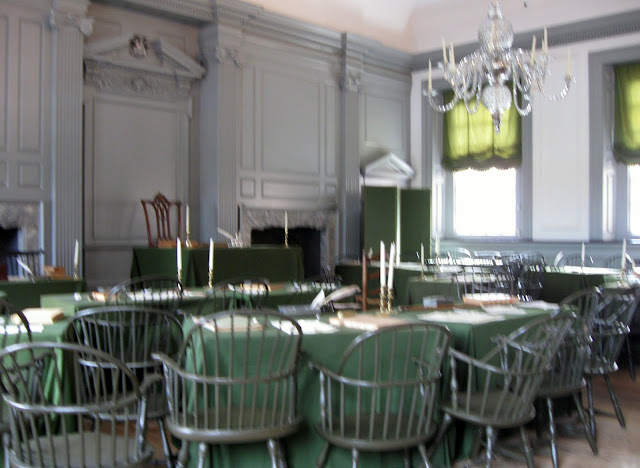 The insides are still the same as they were back in 1974 when I first visited. The spiel is much the same as well, but you would have to expect that. The difference is that the Liberty Bell used to be housed inside the building but has since been moved to a new building across the road. 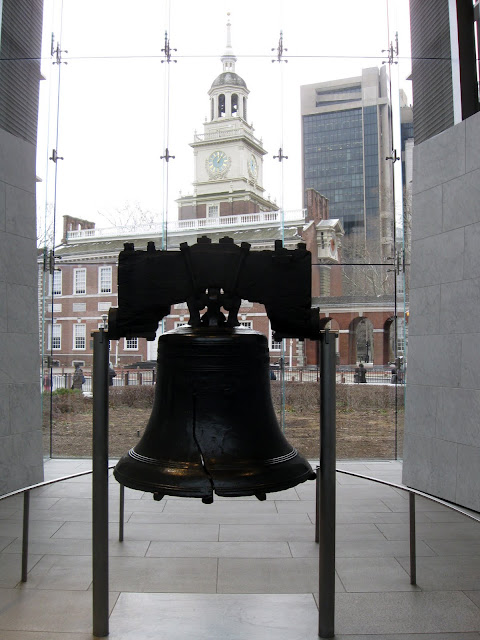 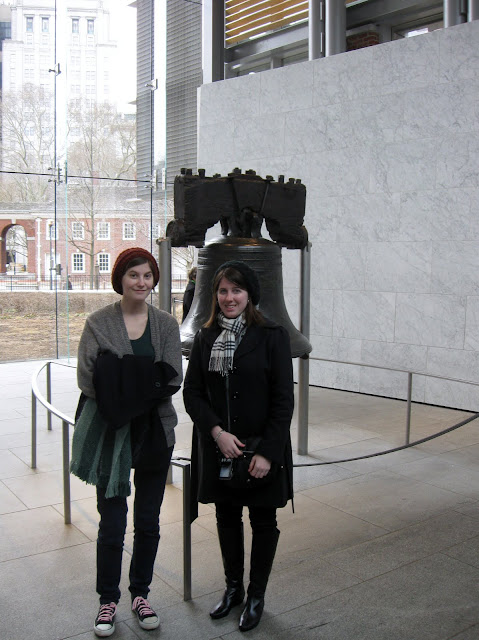 Robin and Rebecca hiding the crack in the bell. 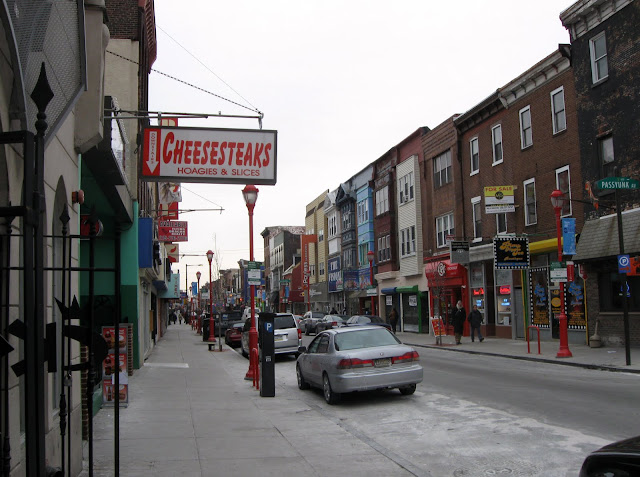 So enough history and it's time for lunch, so down to South Street where we did not have a cheesesteak. 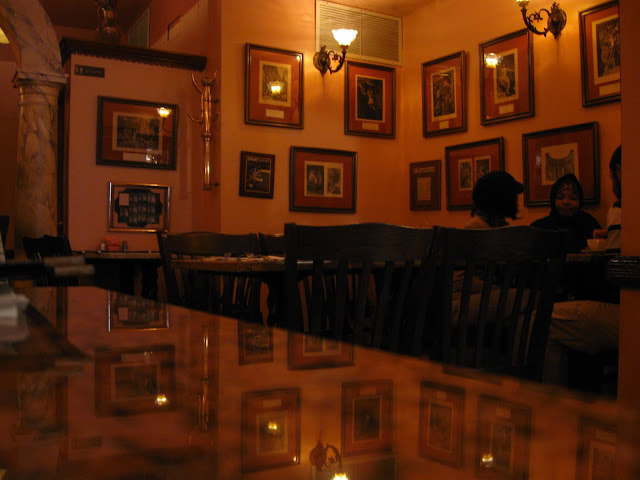 Instead we went to South Street Souvlaki which was having a quiet day. At night, it is difficult to get a table. The Greek food is really good and we tried the sausage and fig starter which came in a balsamic vinegar reduction. I really liked it but then I like all three ingredients. 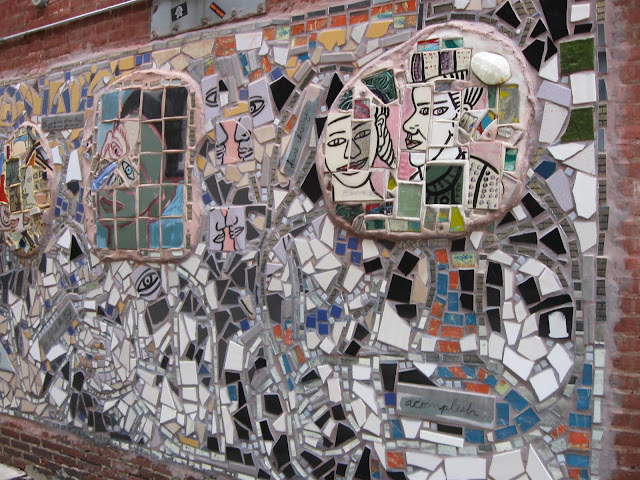 South Street is still the happening place in Philly with all the restaurants, bars, sleaze joints and bling shops. On the side streets you can see a number of ceramic murals like this one.
Posted by Ray Perry at 3:23 AM No comments: