Over the years we have accumulated a lot of frequent flier miles since we purchase virtually everything with our United credit card. The miles mount up over time and we used some miles to fly Robin home for Xmas. It's actually a good time of year to use these miles since airfares at Xmas are expensive but the miles required for the flight from Sydney to BWI and back remains the same year round.

It's five years since Robin was home for Xmas and while the hot version in Sydney can be very pleasant, the cold version she grew up with has its attractions so she was pleased to come home.

Because the trip was organized at the last minute, Robin did not tell her best friend in America, Amanda, that she was coming home and just turned up at her house for dinner as a surprise. She let Amanda's husband James in on the deal so that he could cook some extra food and the surprise worked. 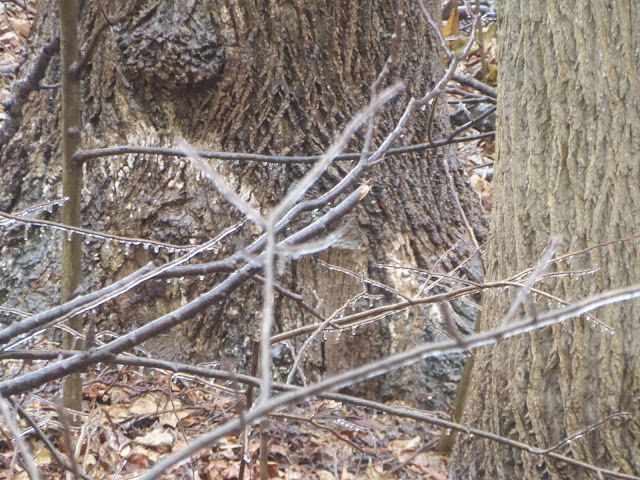 It was well below freezing when Robin arrived and two days later we had an ice storm which left every tree limb and twig covered with a coating of ice. 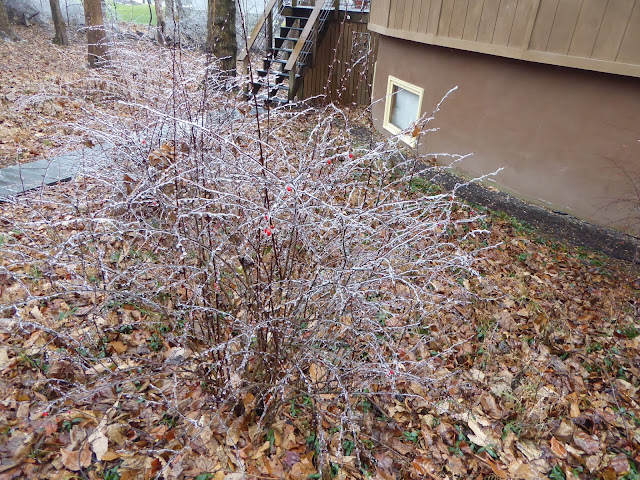 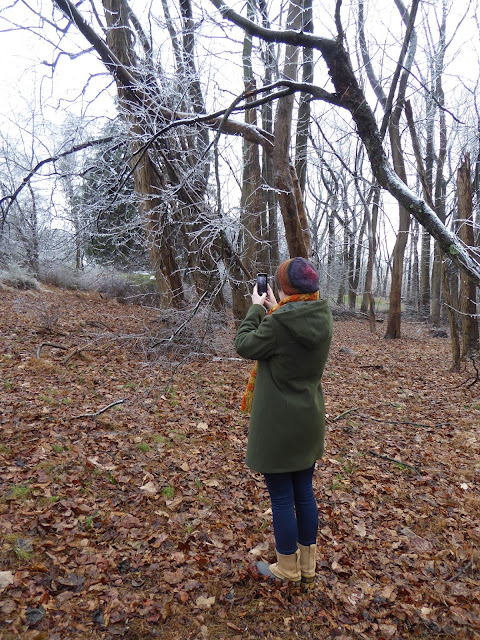 Robin and I went for a walk so that she could check out the community. Notice the elegant booties. 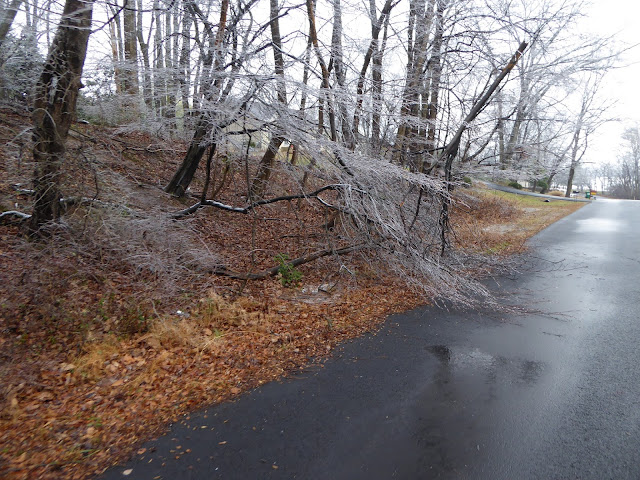 The temperature was just on freezing and notice how the weight of the ice affects the branch. 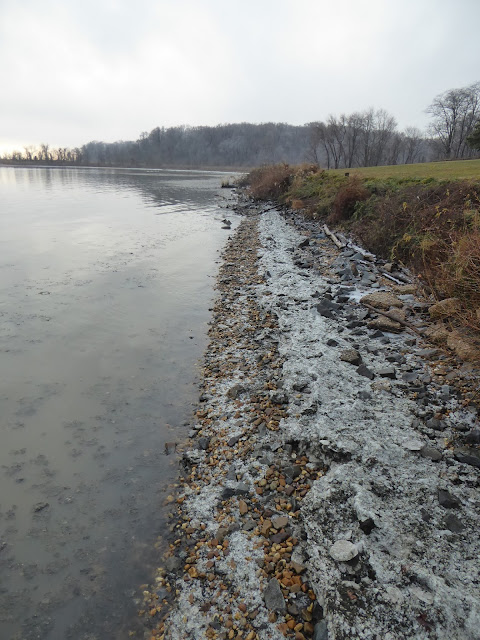 Even the water was covered with little bits of ice. 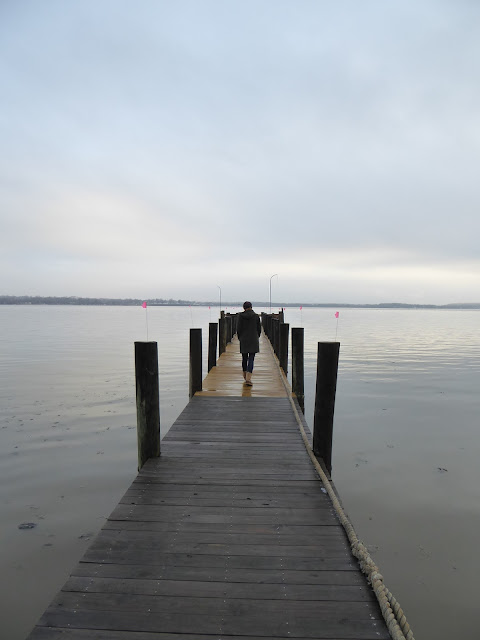 One of the community jetties. 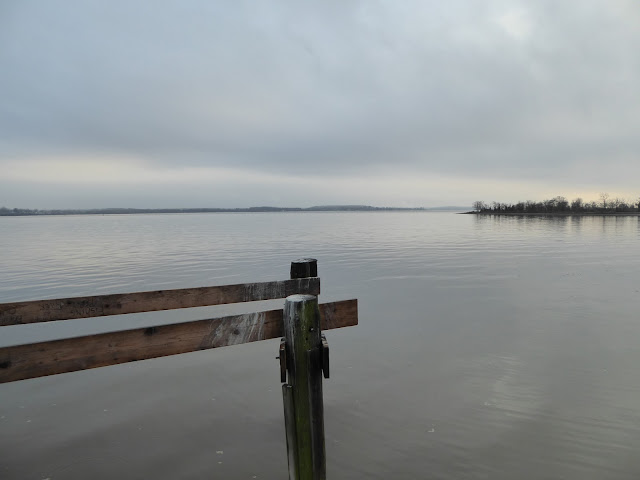 The Bay is really beautiful in the grey light. It's all very peaceful. 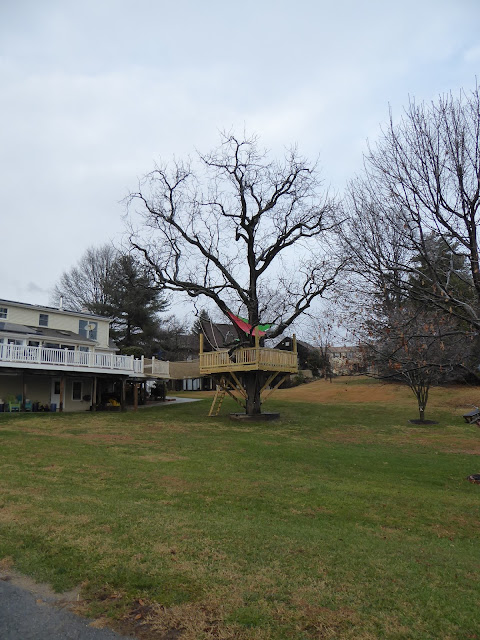 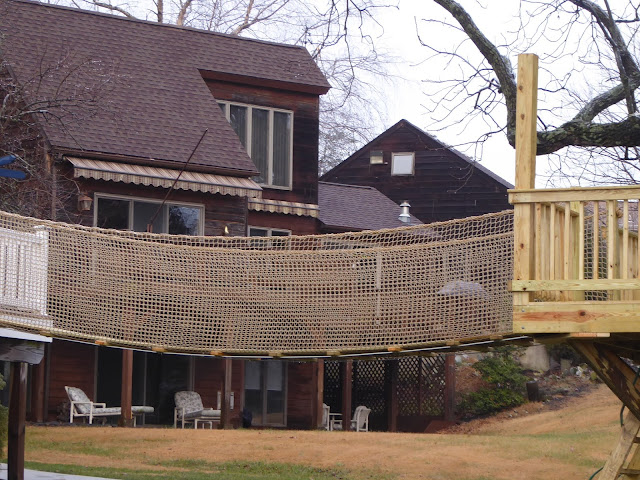 I don't go down to the water during my regular walk so this was the first time I had noticed a new tree deck with suspension bridge. 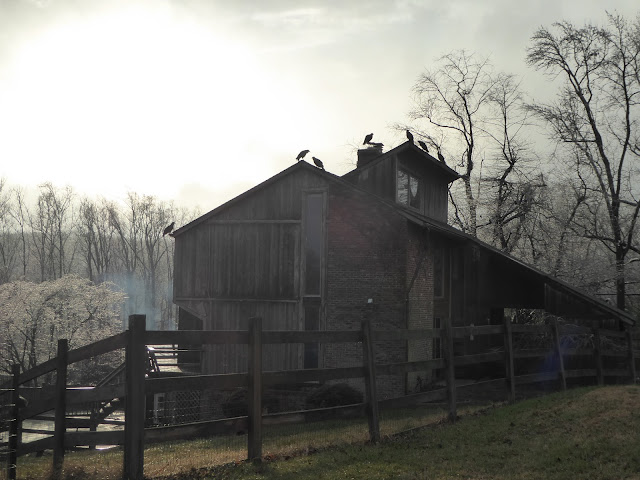 This house was a popular roosting point for the Turkey Buzzards which are common in the area. 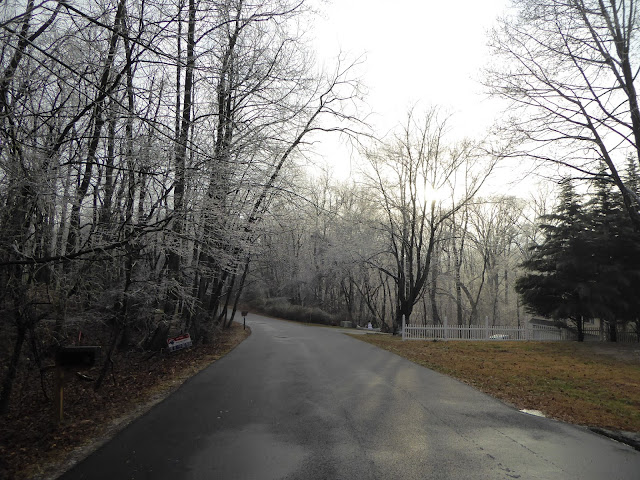 The sun started to come out and immediately the temperature rose a degree or so. The ice started melting off the trees and falling on the pavement. 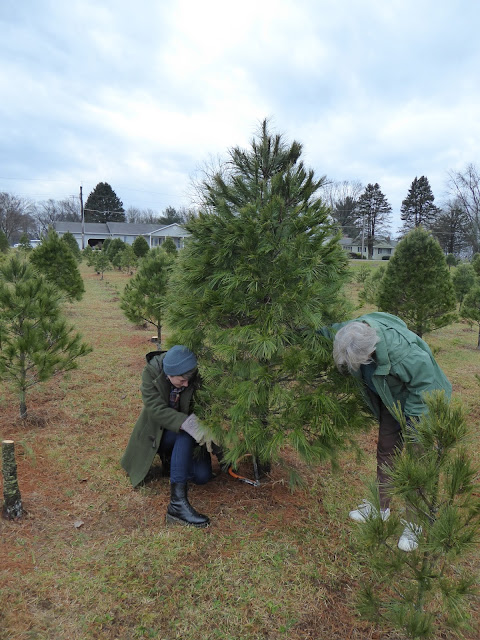 Robin wants to experience the 'full' Christmas so of course we had to get a Christmas tree which we haven't done for years. The places we used to go to were no longer in business so we tried a different tree farm which was in the same area we used to go to. Marianne and Robin found a tree they liked and Robin attempted to cut it down with the saw the tree farm provided. 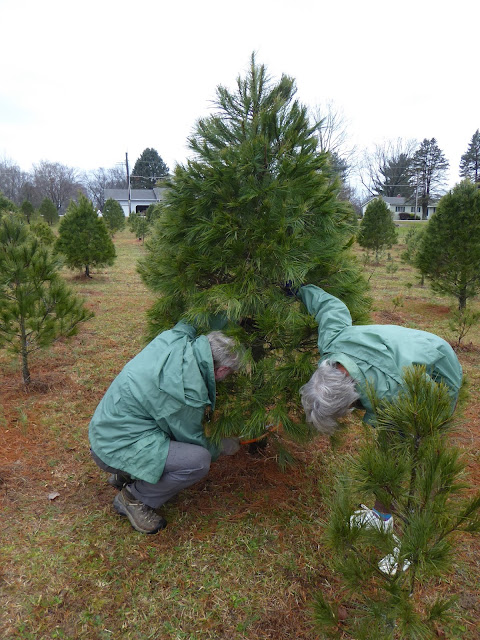 She failed dismally and so I took over since I have cut down quite a few in my time. We had our rain jackets on since it was supposed to rain. At least it wasn't freezing cold like some other years and we did not have to trudge through snow. 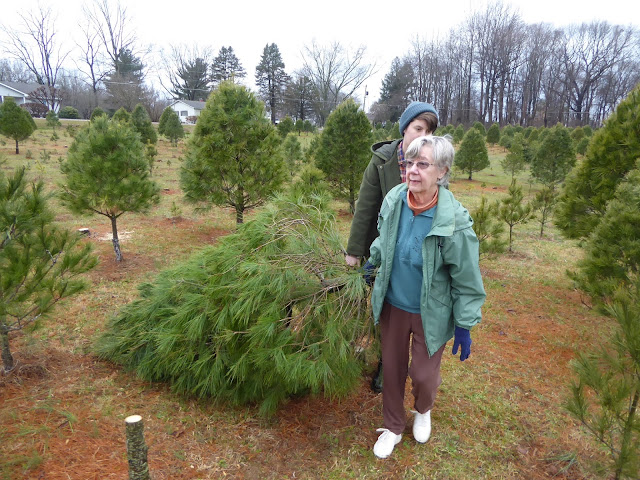 The full experience includes dragging the tree back to the car. I carried the saw and took photos. 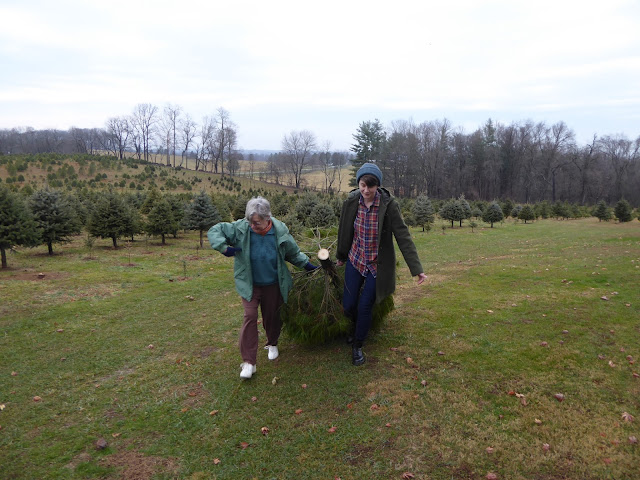 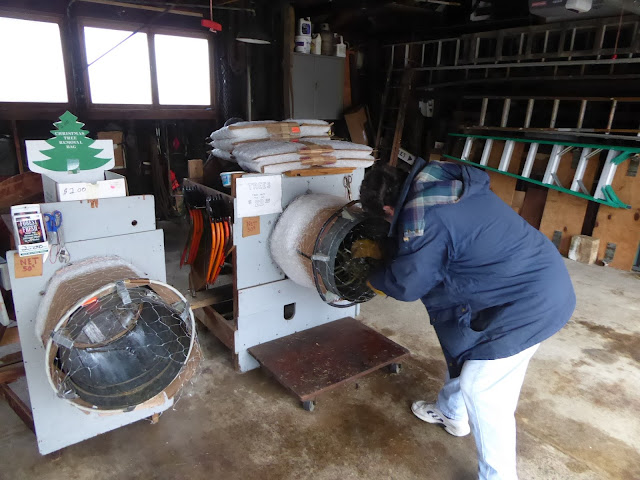 The homemade netting machine for the tree which cost just $23 which is very inexpensive in this area. We talked for some time with the two guys who were handing out the saws and operating the baling machine. The older man had been to Australia years ago and thoroughly enjoyed it. He went all over the place and still remembered the names of towns he had passed through such as Coonabarabran. We were the only customers as the time. 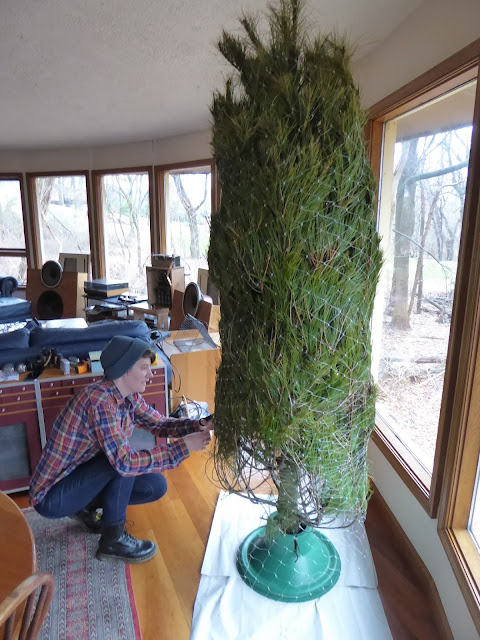 The tree just fits into our Mini and we got it home and managed to get it into a vertical position. 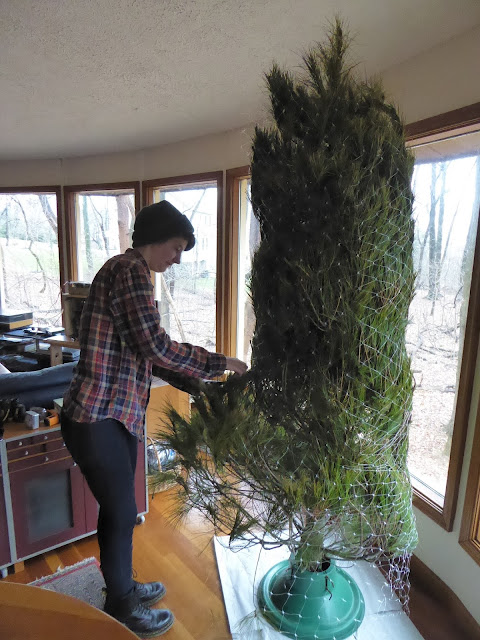 Robin cut off the netting. 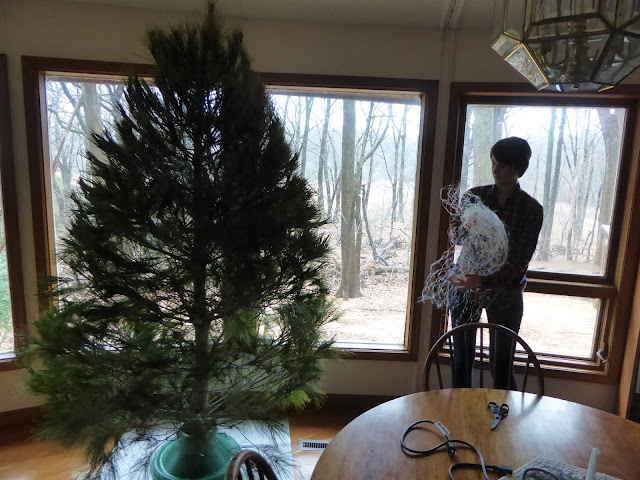 A naked tree ready for decorating. 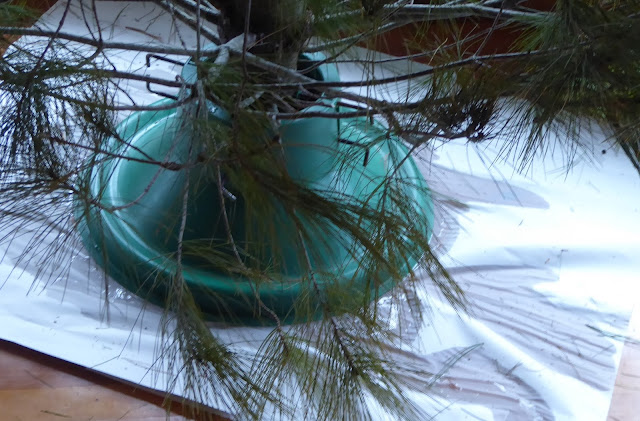 We discovered that after years of disuse the stand had developed a leak. Since the tree needs water to survive more than a couple of days, we turned the tree over and fixed the leak with Goop which is a glue I use when I build my amplifiers. It develops a strong bond that can be broken if you need to. 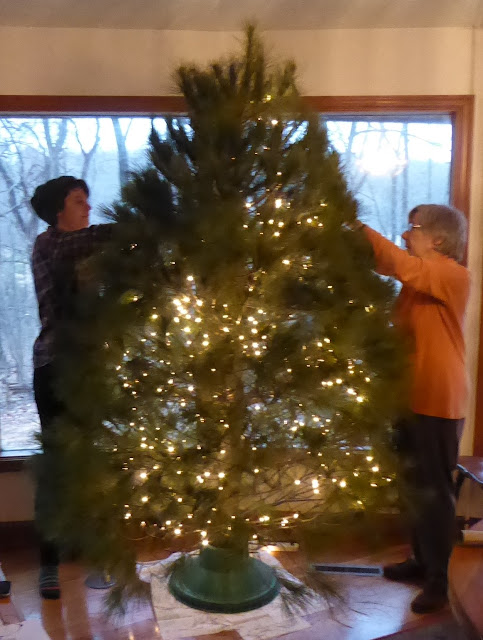 I turned on the Christmas music and Marianne and Robin put on the Xmas lights and started to decorate. I keep out of that operation and mother and daughter have a wonderful time. 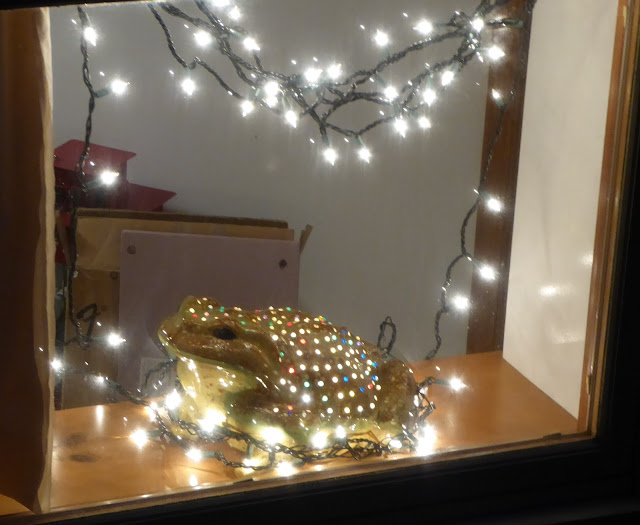 There was a strand of lights left over so Robin decorated the window of her bedroom. The ceramic frog has an interesting history. Marianne's great aunt died just as we were building our house. I was asked if I wanted anything out of her house and requested just two items. The first was an old set of scales which stands in our bathroom and which we can weigh ourselves with.

The other item was this ceramic frog which was the ugliest item in the aunt's house. It has a light bulb inside that illuminates the plastic beads on the back of the frog. At the time, I was running the football competition at the college where you had to pick the winner of each NFL game during the regular football season. The entry fee was a dollar and if you picked the most winners, you got the money in the pool. However, if you had the lowest score, you got the frog for a week and it had to sit on your desk lit up to show all and sundry how little you knew about the game of NFL football. 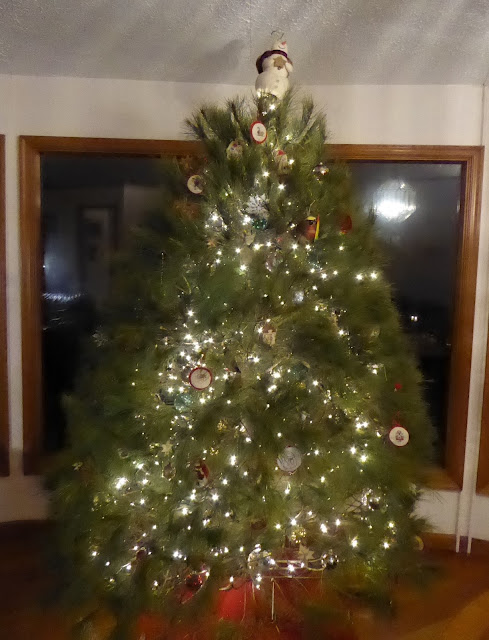 The finished tree. The lighting makes it look a bit lop-sided but it is one of the most symmetrical we have ever had.

Marianne belongs to a group that transports rescue dogs, mostly east of the Mississippi. It is organized by a woman called Martha and it's called Martha's Mutt Movers.

The dogs are transported by volunteers in relay fashion. It's been a few years since we drove one of the legs with a black Labrador but we took part again and our task was to pick up two dogs at a Cracker Barrel just off I-95 / route 543 and drop them off at a Dunkin Donuts just south of Philadelphia, a distance of about 60 miles. The relay starts in Georgia and ends in northern New Jersey. 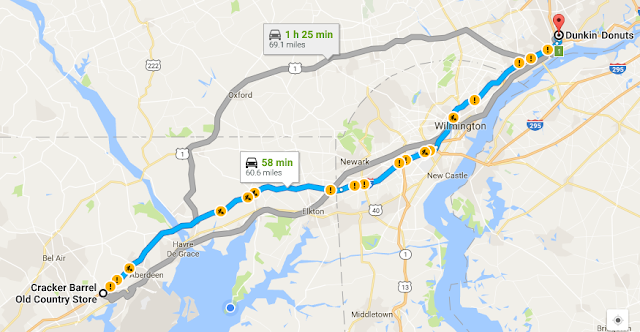 Our route. We did not do all of the route in blue because we can avoid the $12 in tolls on I-95 by travelling on route 40, the grey route on the southern side. 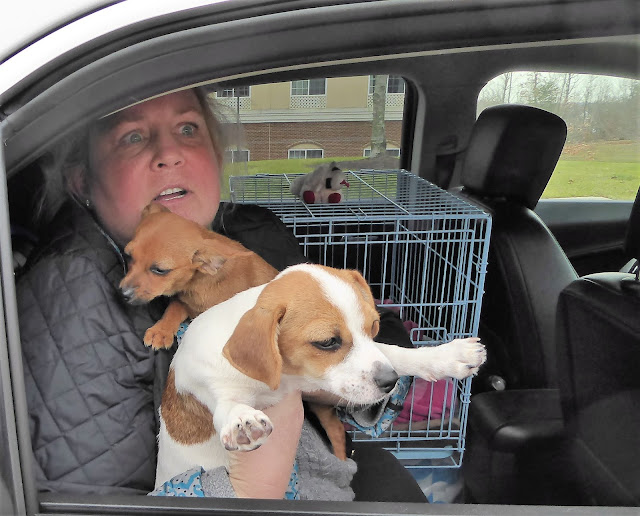 We arrived at the Cracker Barrel parking lot and quickly found the vehicle that was described in the directions that were sent to us. No, the lady was not as terrified as she looked. The dogs were kissers, apparently,  and very well behaved.

By the way, I did ask permission to use their photos. 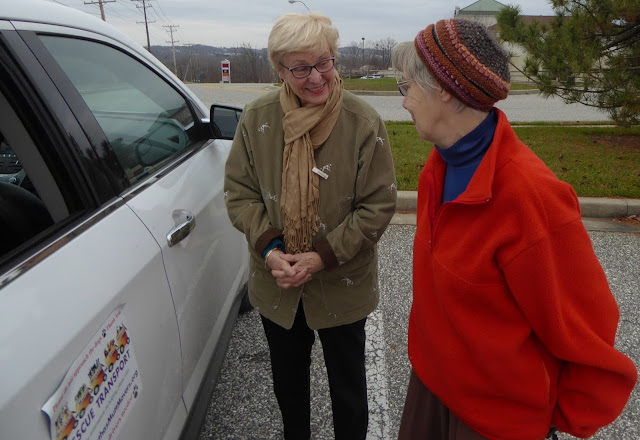 They even had a sticker on the side of their car identifying them as Mutt Movers. 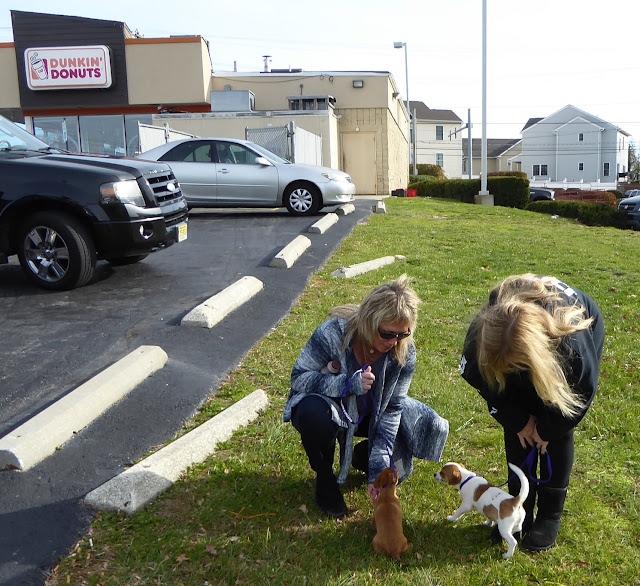 Our drive up to the Dunkin Donuts was quite uneventful and the next vehicle was already there waiting for us. We had placed the two dogs in out cat carrier and we think the dogs slept most of the way since we did not hear a peep out of them. They were definitely not Airedales. 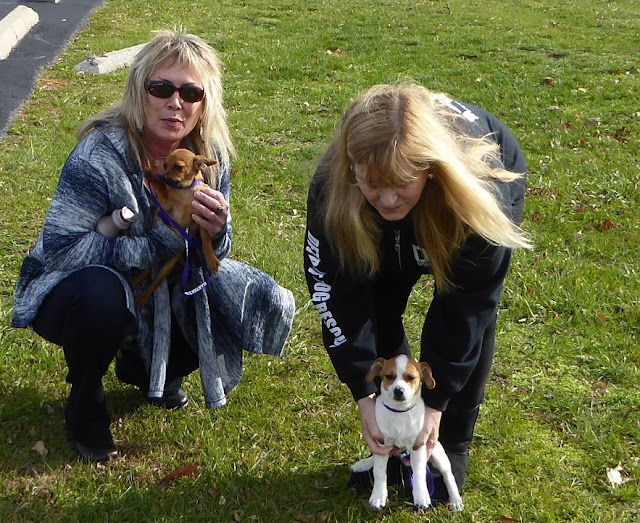 Chicca and Chicco who were just four months old. Hopefully they will enjoy life with their new owners, whoever they are. These ladies were another couple of dog loving volunteers, not the future owners.

So if you think you might want to help out, go to Martha's Mutt Movers and give it a try.