A summer where I am not a complete bludger

Marianne has been receiving comments about the dearth of blogs since we arrived back in the USA. You will be pleased to know that I have not been completely idle. Of course, Marianne has been quite industrious downstairs working on her scrap-booking. Packages have been arriving virtually every day and the postman actually asked me to thank her for keeping him in business.

I too have a hobby which is to build tube (valve) amplifiers. I have been doing this for about fifteen years and it gives me something to plan and think about when I am not planning trips. My hand motor skills are not as good as Marianne's, but I enjoy the physical aspect of soldering and bolting components together.

For most of the fifteen years I have been running a small group of DIY amp builders in the Mid Atlantic area called the Bottlenecks. We held a meet earlier this year and decided to hold another competition. We specify what kind of amplifier is to be built and also the type of container. For our first competition, the container had to come from Ikea. The next competition required a container from Target.

This year, the amp has to have a push-pull architecture and the container has to be some piece of electrical gear that is no longer being used. The other theme is that the bulk of the parts have to be recycled. Many of us have projects that either failed, did not turn out too well, or we are just not interested in anymore.

Since I am retired and have plenty of time on my hands, I am building two entries with the hope that one actually works. 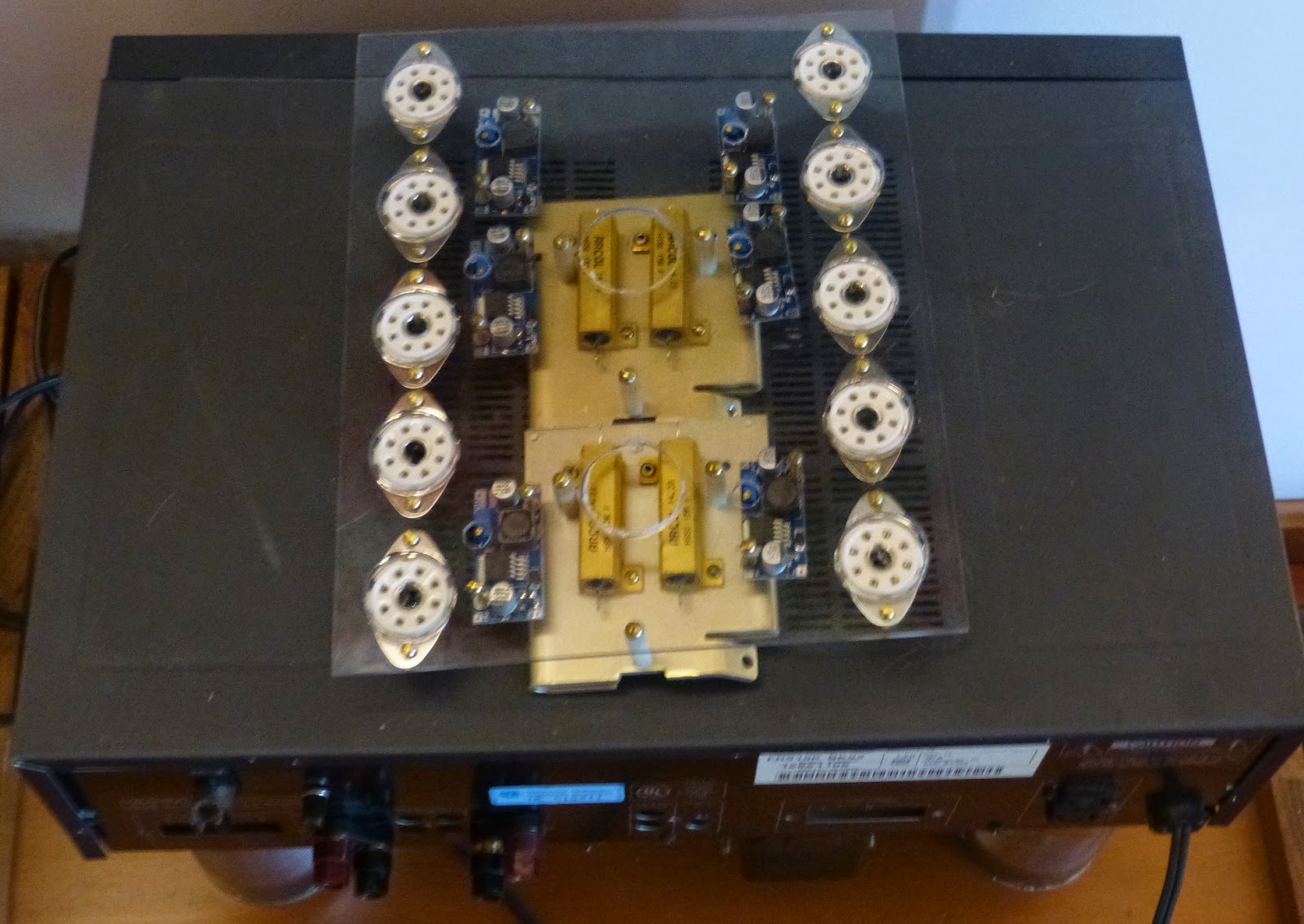 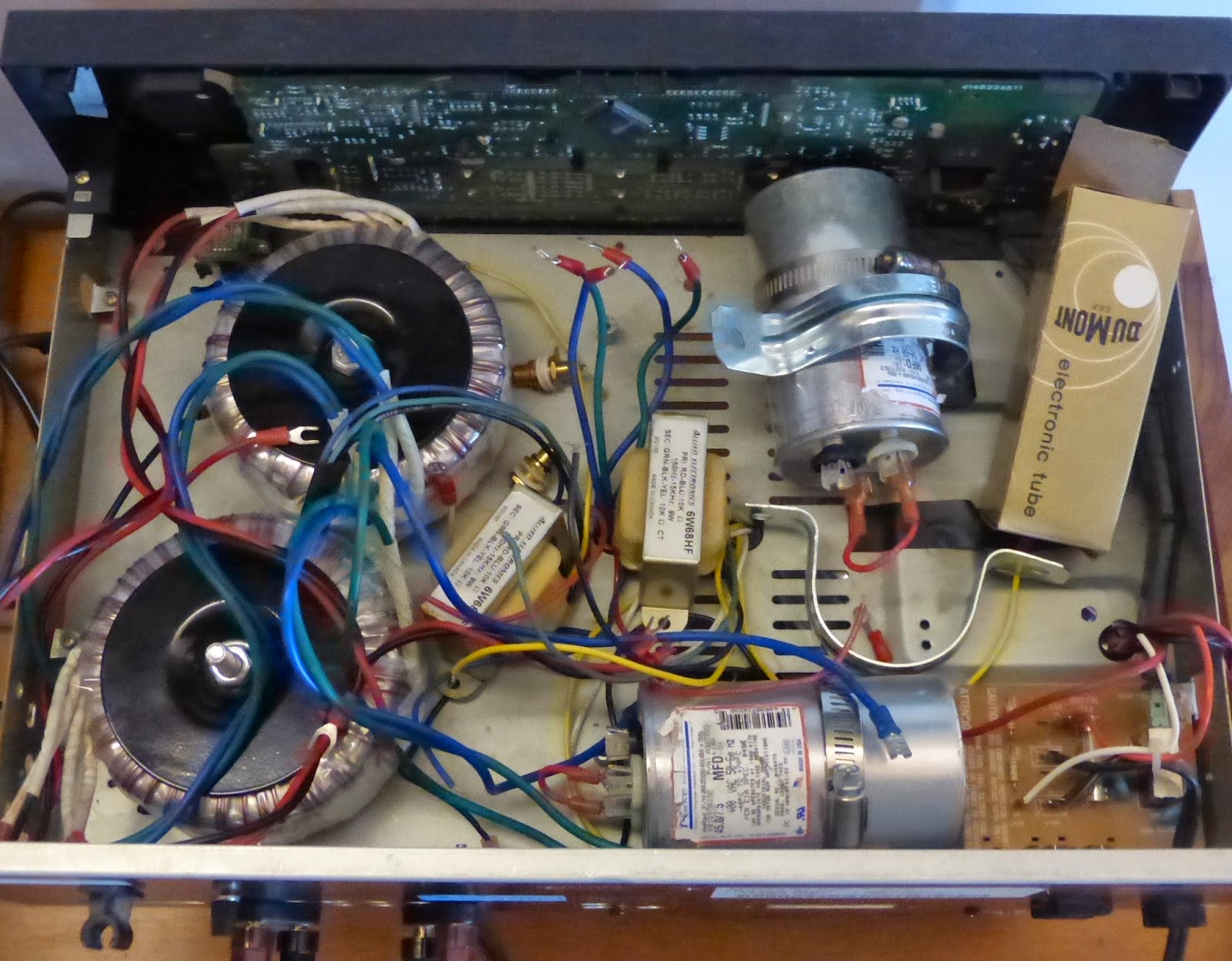 Just a jumble of parts to be positioned and hooked up. 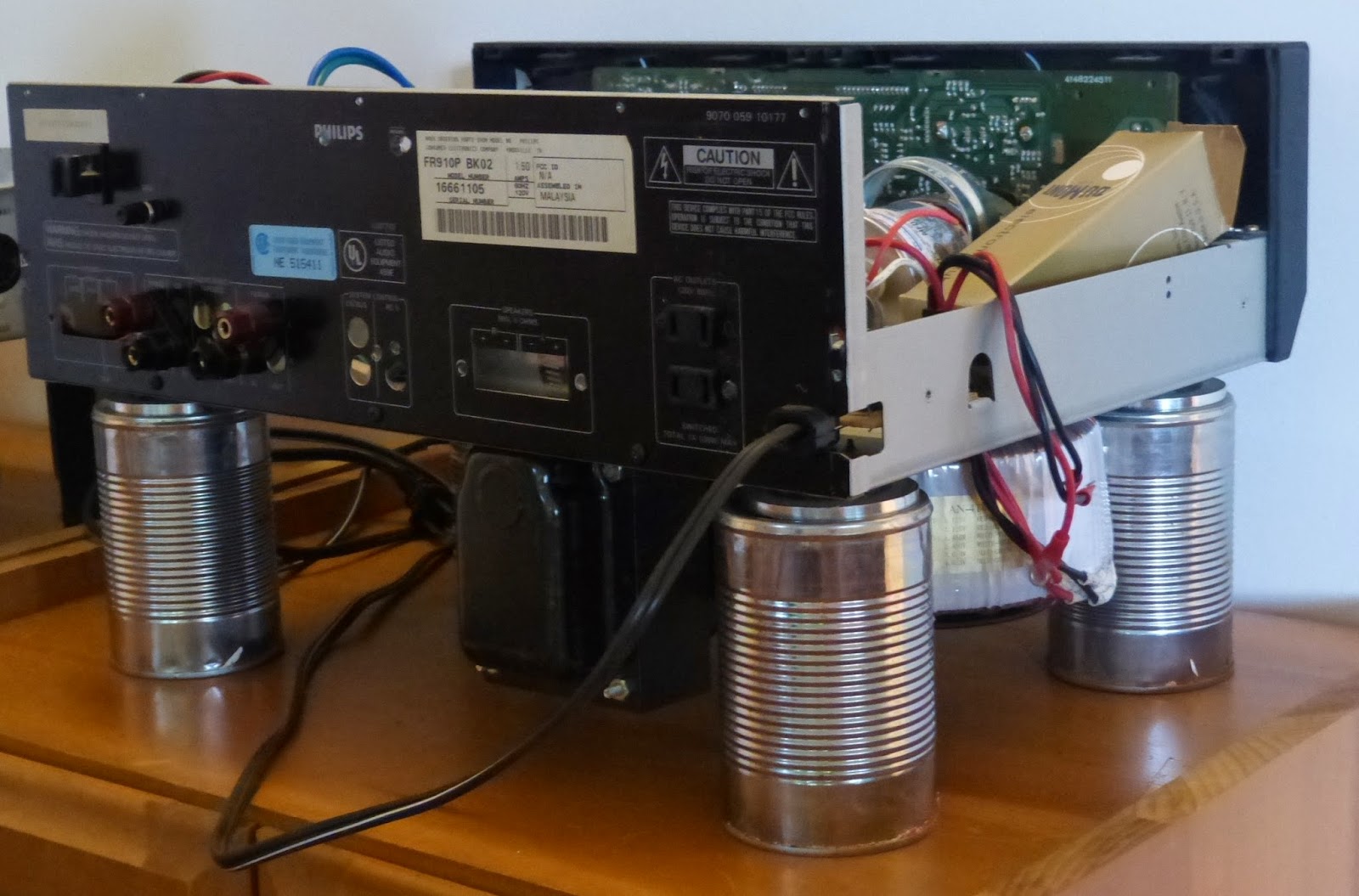 The first uses an old receiver that originally belonged to my brother in law. It stopped working when we were visiting and he bought a new one. I took the old one back home and got it working by replacing a relay. I was using it for a while about a year ago but the cat was sitting on top of it, vomited, and managed to short out the power supply.

The cat was not electrocuted but it has made me wary of using tube amps because of the high voltages involved. We had an interesting discussion on one of the forums I subscribe to about animal / child proofing our stuff.

The power supply was too far gone to fix so I've stripped out the innards and am installing some of my old components. Yes, those are tin cans (from Aldi) holding it up. There was not enough room inside for the large power transformer and choke. When the amp is finished it should have 10 4P1L tubes and four Australian 50 watt light bulbs poking out the top.

By the way, I use a glue called Goop that I get from Lowes that does an amazing job of holding metal objects together. The bond is quite strong but not strong enough that you cannot separate the objects if you need to. 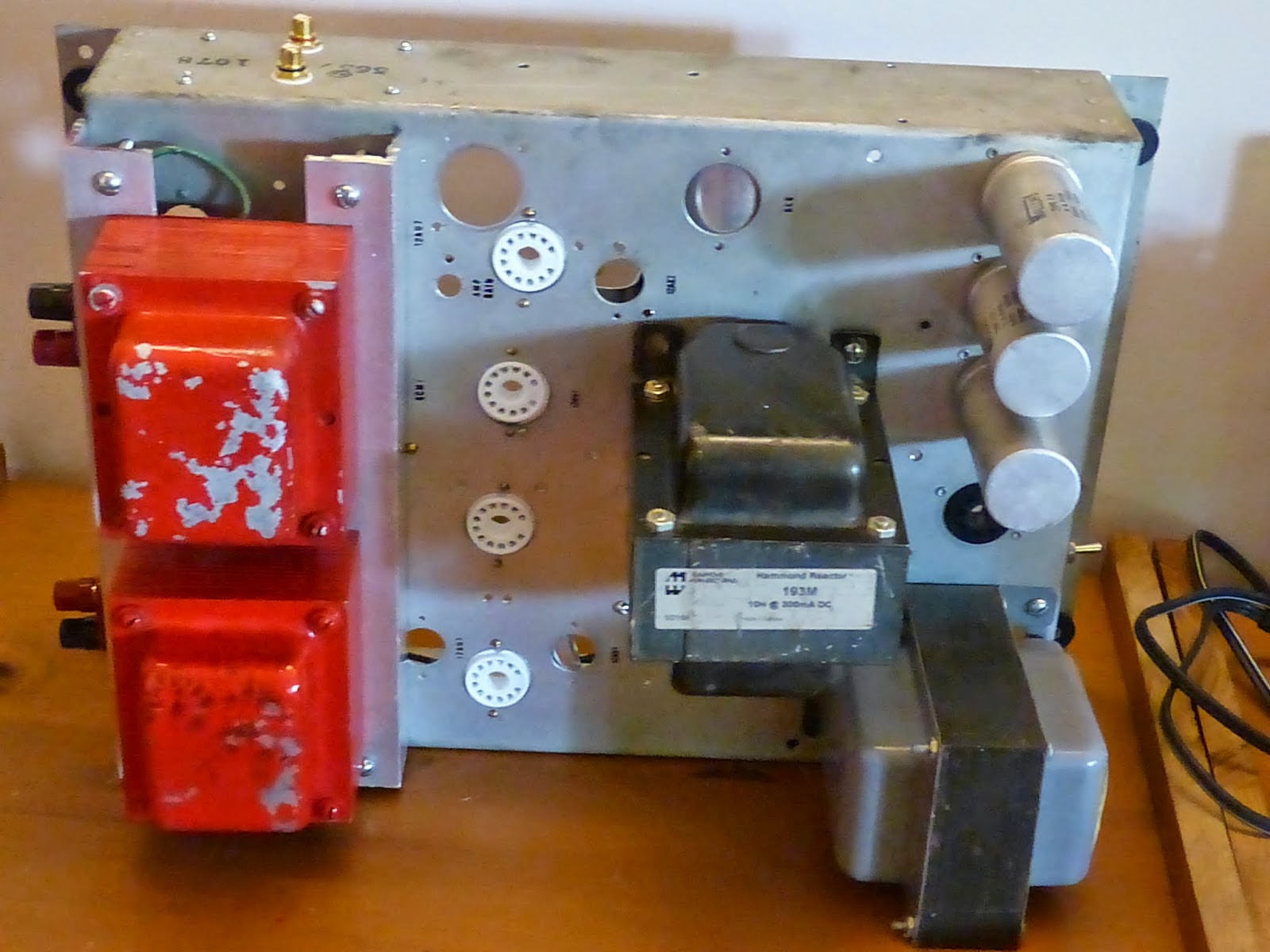 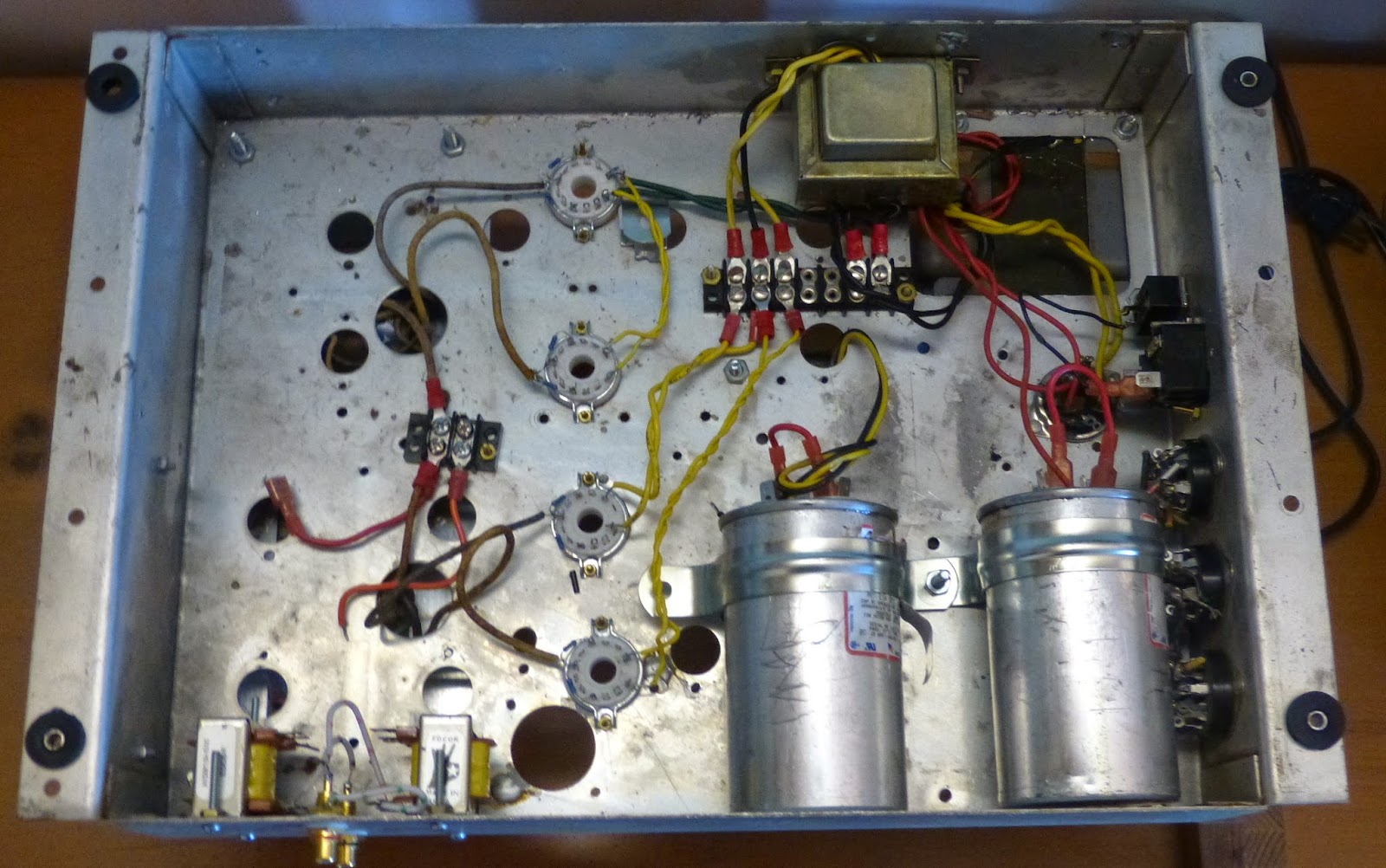 The other amplifier mostly uses items that were given to me over ten years ago such as the case, the grey transformer and the red transformers. The bloke who gave me the red transformers was famous for using old organ amps and converting them into very good sounding amps. He used duct tape to cover up the holes and that is what I will do with this amp. Unfortunately he died soon after giving me the transformers. I hope this amp turns out well so that I can keep it in his memory.

You can see a photo of one of his amps here.

Perhaps in late October after the competition, I will do another blog to let you know how they turned out.