Marianne was hot to trot to the huge fabric store called Hancocks in the morning after we arrived in Paducah. I wisely stayed in the motel. Do not get in the way of a quilter and fabric. After about 90 minutes she returned with a well stocked bag.

You might notice a detour to a place called Bardstown. More about it later. 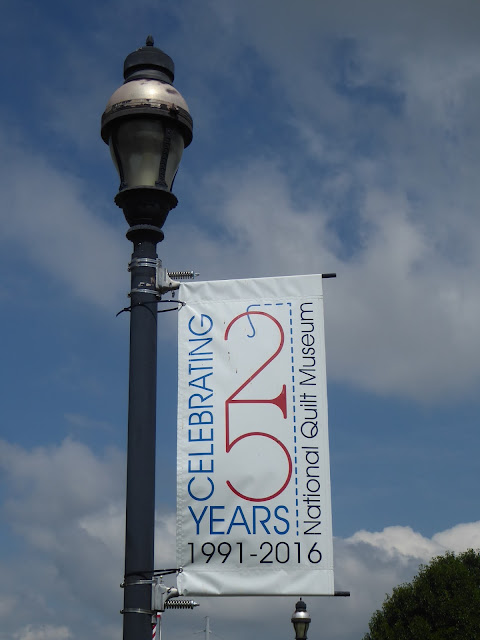 Before we left Paducah, we visited the National Quilt Museum.

Unfortunately we could not take photos inside, but there were lots of quilts, all fabulous in their own way. There were five or six that I really liked. And their seams were straight. 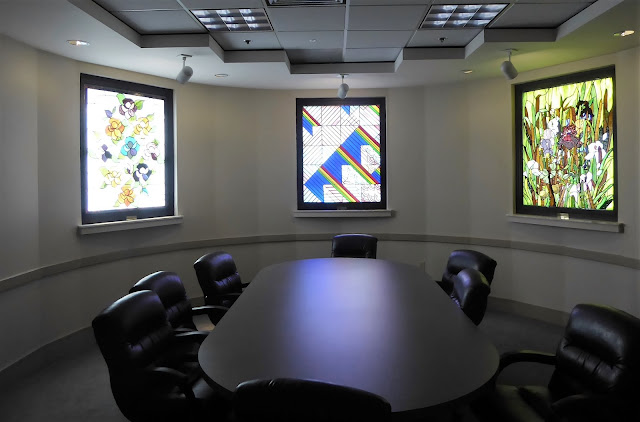 What appeared to be a board room with stained glass. 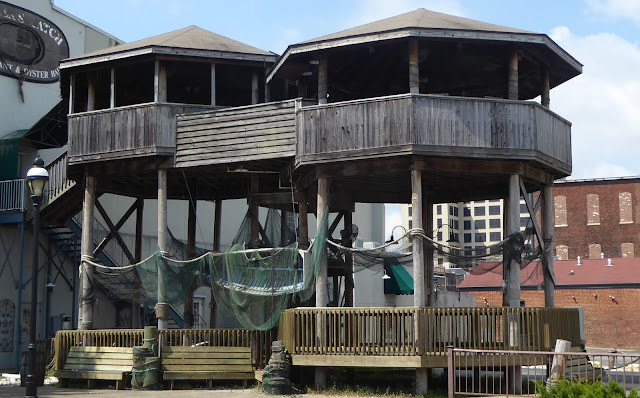 As we walked back to the car, we noticed this strcture which appeared to be part of a restaurant. 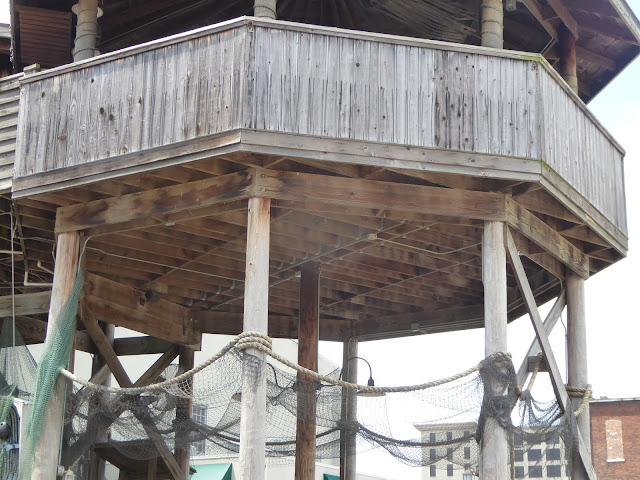 It would have had a view over the nearby Ohio River.

There is a levee that protects the town from floods. 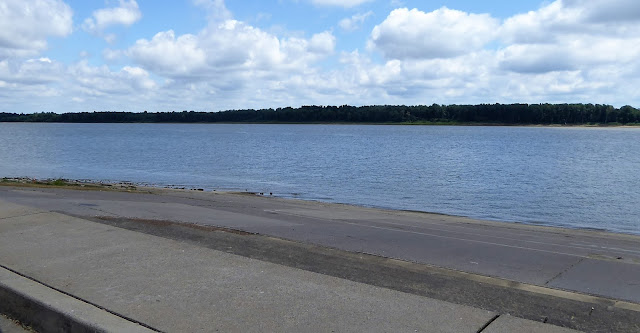 Paducah appears to be a nice town and we wished we had more time to look around. However when you are on a coast to coast mission, there are always miles to be driven each day and a limited amount of time and energy. 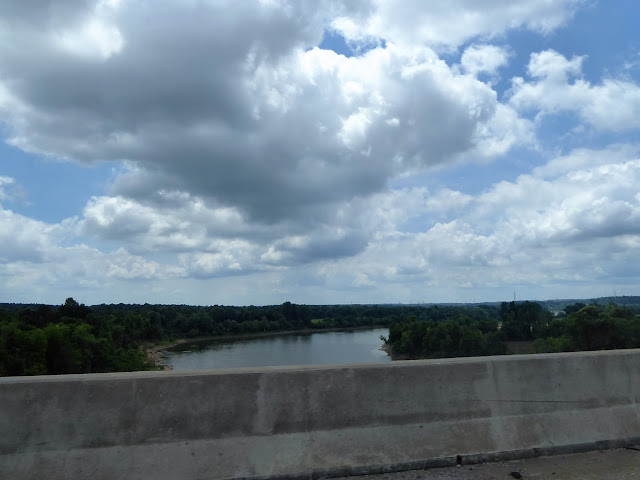 We crossed several rivers on our way to Louisville. 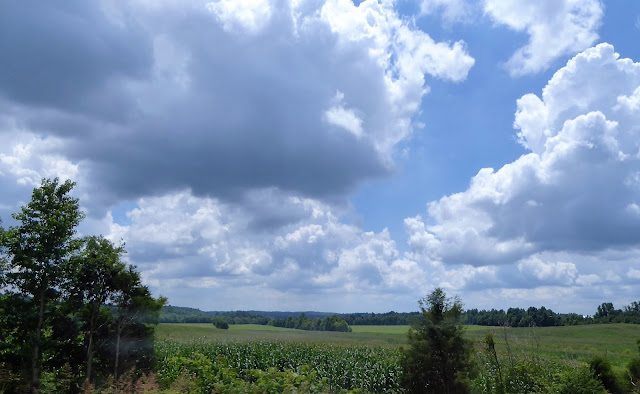 Kentucky is a very pleasant and pretty state, much like Missouri. There is plenty of rain so everything looks looks green. 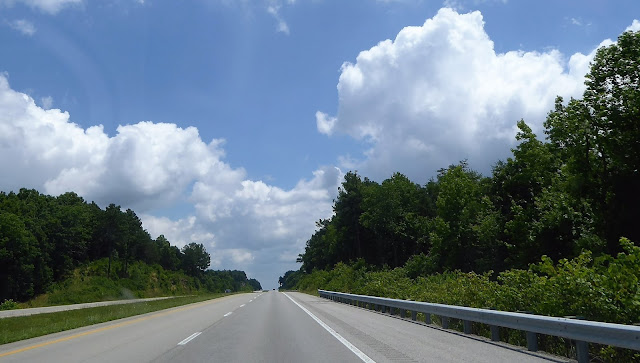 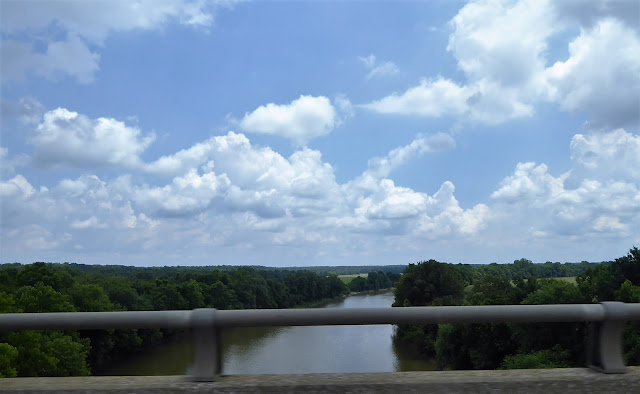 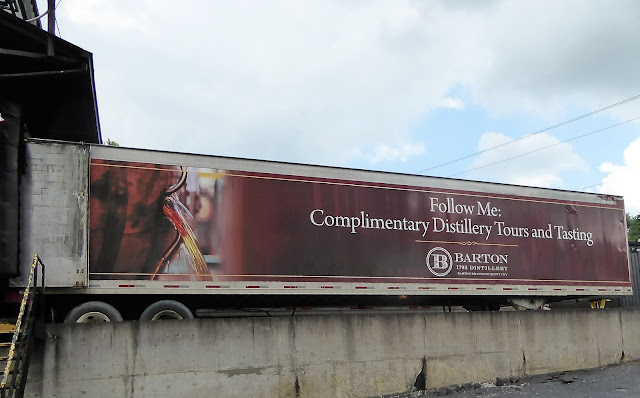 We detoured to Bardstown to visit a Bourbon distillery. There are several famous name bourbons produced in the area but we choose to go to a lesser known but expensive version called  Barton1792. 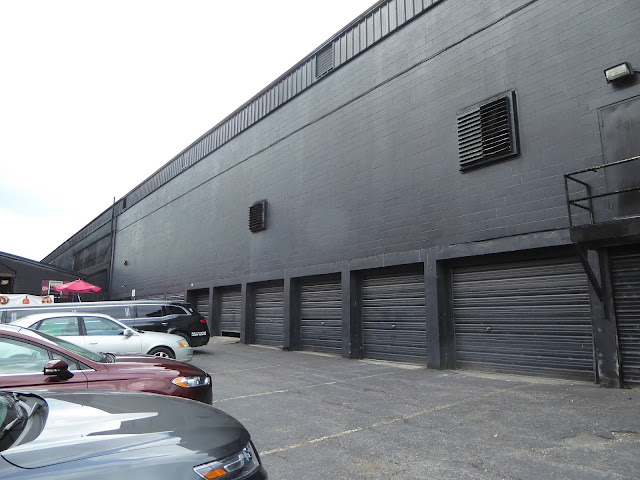 Most of its warehouses are painted black. Except for this one. 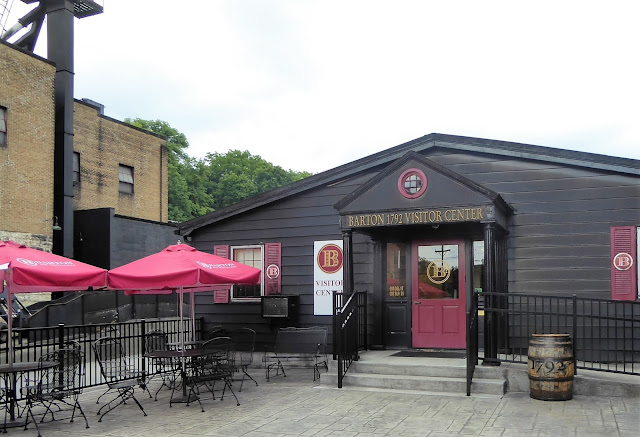 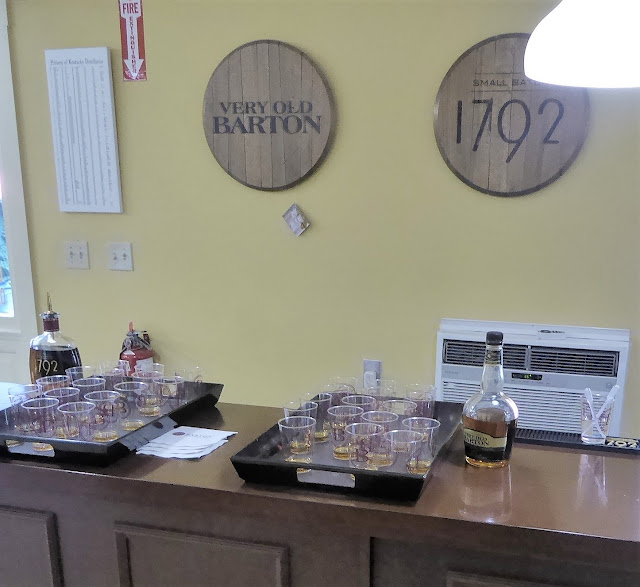 We arrived too late for the tour but just in time for the tasting. We were given samples of three whiskeys. Naturally we liked the most expensive version.

Most distilleries charge about $10 but this one was free. 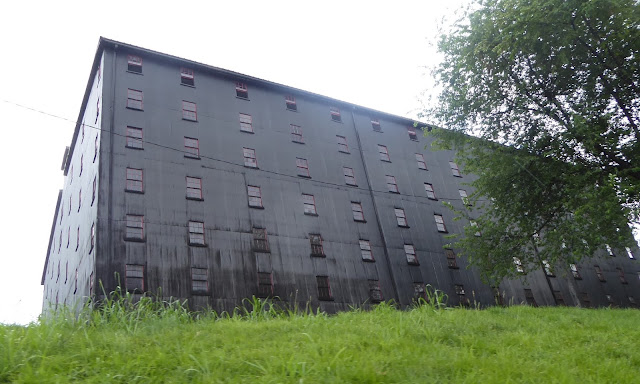 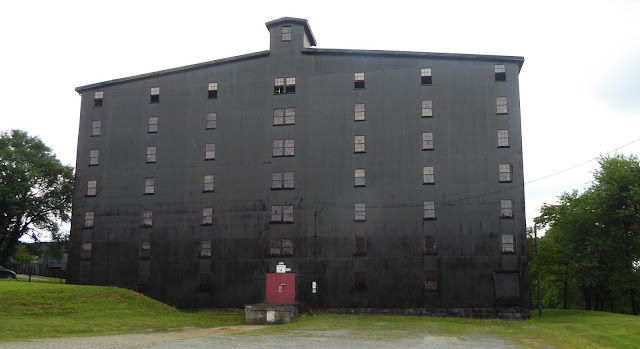 About 30 years ago when I first started working at the college, the IT department would go to a conference in Louisville each year that was sponsored by a software company we had dealings with. The company was based in Shelbyville, about 30 minutes drive east of Louisville. 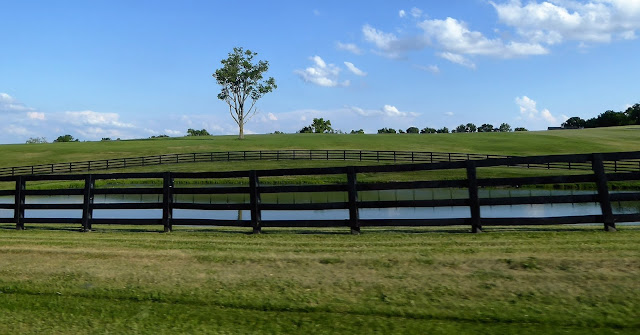 The drrive on route 60 is wonderful once you get out of the Louisville suburbs. This is the land of magnificent horse farms and Kentucky Bluegrass. 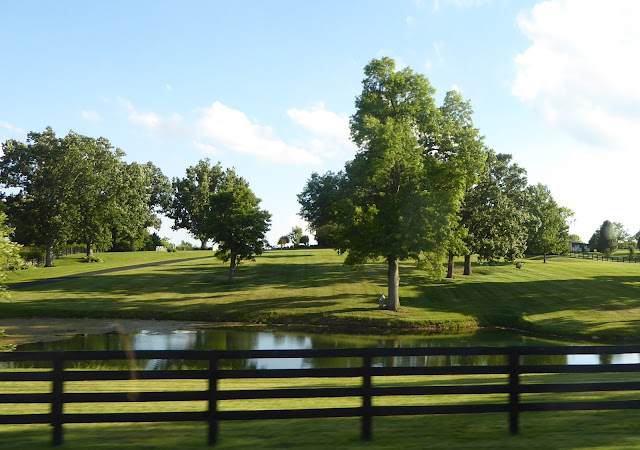 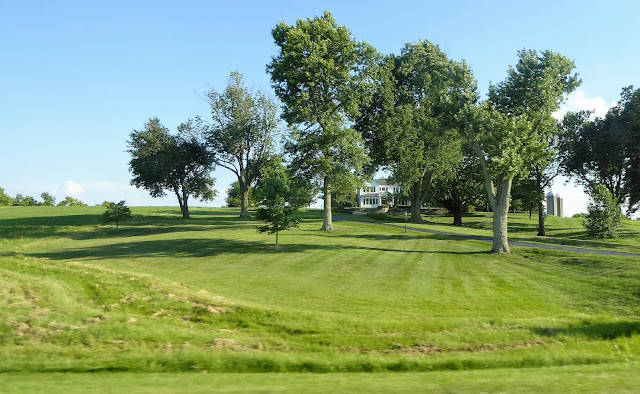 However we drove out here for dinner to go to this restaurant called Claudia Sanders. Claudia was the wife of Colonel Sanders of KFC fame. After retiring, hey move to Shelbyville and Claudia opened a restaurant.

I was taken there for lunch a couple of times and I really enjoyed the experience each time so Marianne and I decided that this might be a good haunt.

The building looked much more grand than I remembered and we subsequently discovered that the original building burned down on Mothers Day 2000. A larger replacement building open on Mothers Day the following year. 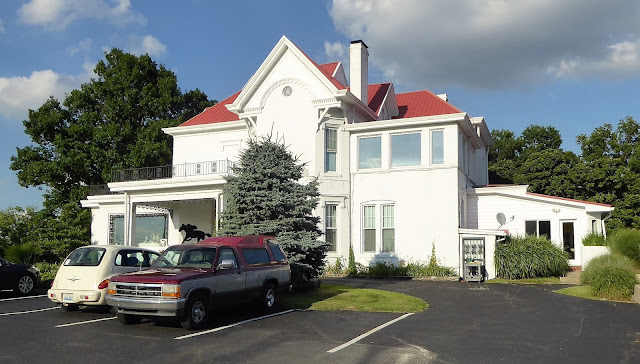 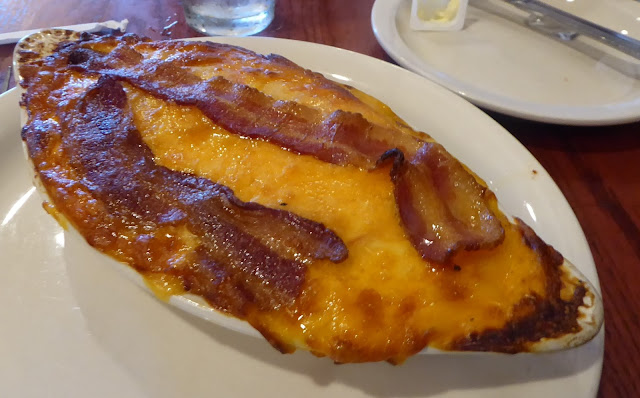 Each time I went to Claudia's, I had the Kentucky Hot Brown which I thought was delicious. The dish itself was invented at the Brown Hotel in Louisville. The Brown's recipe is here.

Claudia's version was a bit simpler but basically consisted on a layer of toast at the bottom with alternating layers of thick smoked ham and turkey piled on top. A creamy cheesy sauce is then poured over the meat to fill the dish and the whole thing baked until it comes out really hot and bubbly.  The ham was smoked in a separate building on the property. The dish is easy to make so I cook the dish about once a year and it is delicious, unctuous, and totally bad for you. Once a year is about right.

The current version served at  Claudia's is now just a pale imitation. Wafer thin slices of ham and turkey just do not cut it and the cheese sauce was not as good as mine by a long way. Sometimes, you shouldn't go back. 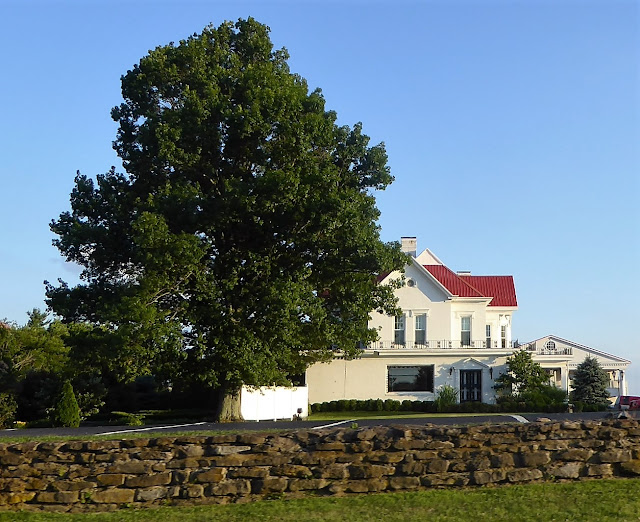 Still it was a lovely drive out there.