For the past year and a half, I have experienced increasing difficulty in walking. I described the feeling as 'walking in molasses'. By last Christmas, I could no longer do my regular three-mile walk and cut it back to two miles. When I went to Argentina, it was difficult to walk short distances and hills were a real problem. I started physical therapy and have also been doing aqua therapy.

Naturally, I had consulted doctors, specialists and anybody else who would listen. I have had MRIs and various scans and the results indicated that there was inflammation of the muscles in the pelvic area. I was eventually scheduled to visit a neurologist at Johns Hopkins Hospital in mid-November and to have an EMG test performed. As a way to keep things straight in my mind, I created a document that described the history of what was going wrong with me. Fortunately, Marianne gave it to a friend who is a nurse and she advised me strongly not to wait any longer and go to the Johns Hopkins Emergency Room the following day. We got there at about 11 am.

Let's just say the Emergency room needs help. The seats are plastic and look uncomfortable for sitting in for long periods. I was in a wheelchair. I was triaged fairly quickly and saw somebody to whom I described my problems. Curiously, when it is your turn to have something done, somebody from the ER staff comes out and calls your name out loud. Often they have no idea of how to pronounce the names. There are TVs going as well as hard surfaces everywhere so it is definitely not a quiet, peaceful environment. It was a busy day and we waited and waited. About five pm somebody came and announced that the delay was due to a shortage of beds.

At 9 pm, after 10 hours waiting in the wheelchair, my name was finally called and we were taken back to a cubicle where we were seen by a doctor. Then, everything changed. I was admitted and wheeled off to a lovely hospital room in a separate building. I felt I had gone to heaven. 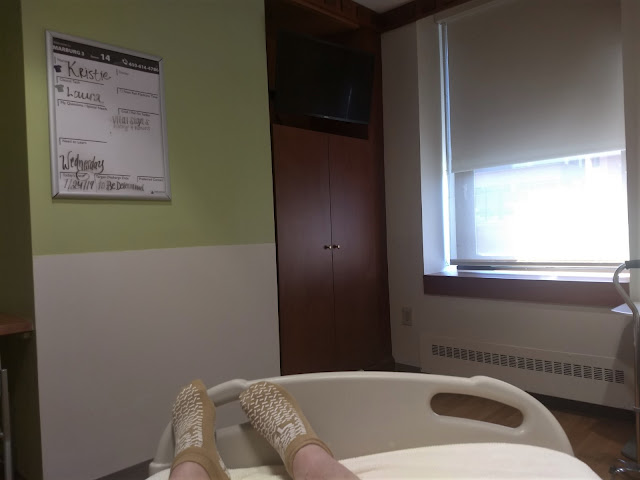 It was a lovely room, quite large and very quiet. I apologize for the poor quality photos which were taken using my cell phone. 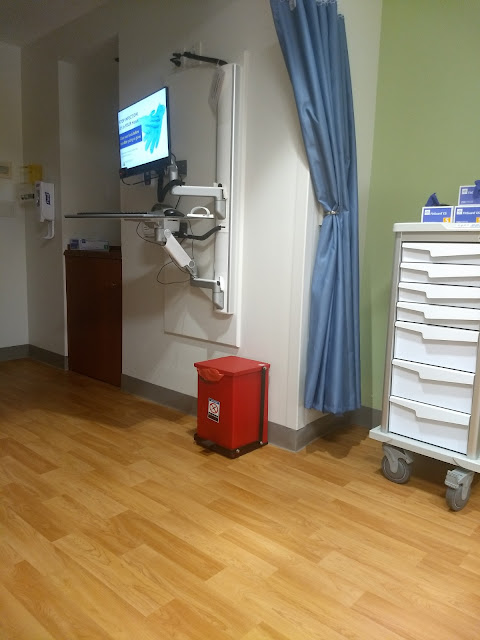 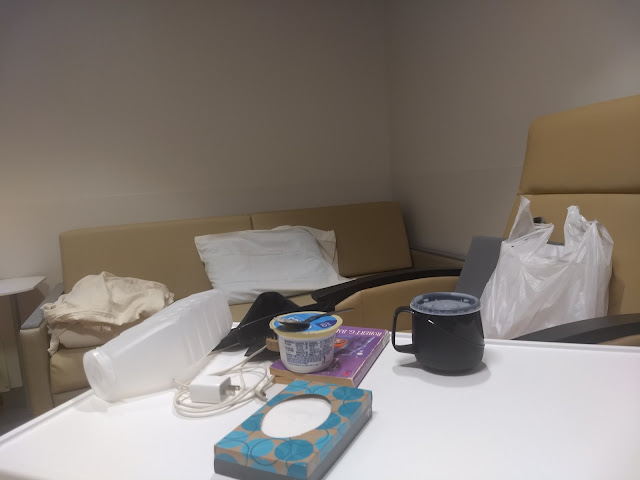 By the window was a couch for visitors and a comfortable armchair which I used most of the time once I got out of bed. In the foreground is the movable table where I could put my things and meal tray. It was probably well after midnight when I could finally go to sleep and Marianne was able to sleep on the couch before going home the next morning. 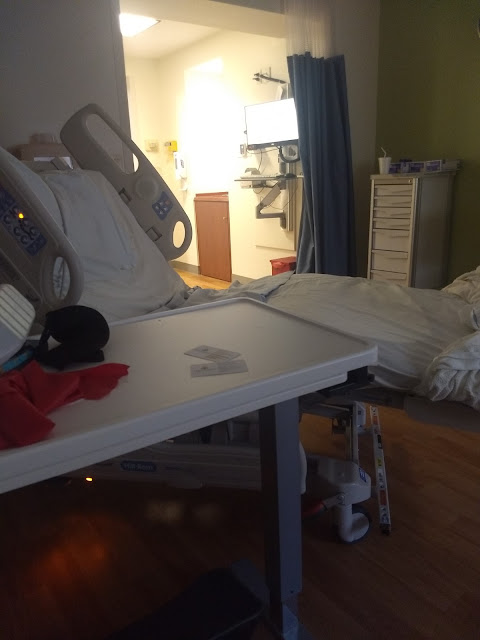 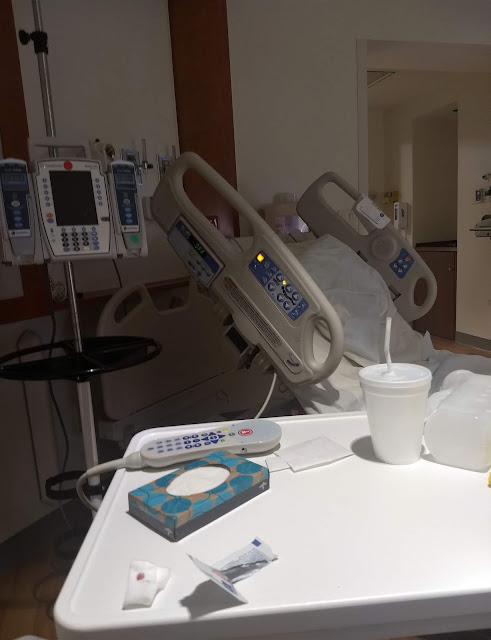 The bed could fold in all sorts of mysterious ways as well as raise and lower. One of the indicators that I was making a rapid improvement was my being able to get out of the bed without help. 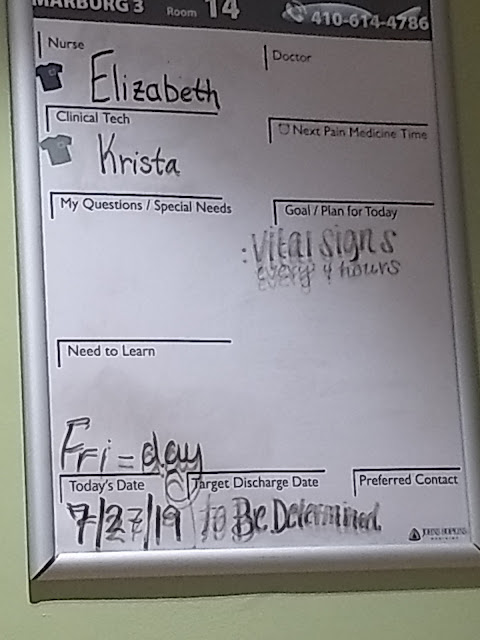 The sign was very helpful for me to remember the names of the nursing staff who were looking after me. Elizabeth told me I could call her Elizabeth or Beth or both. I replied that from then on, she would be known as Both. 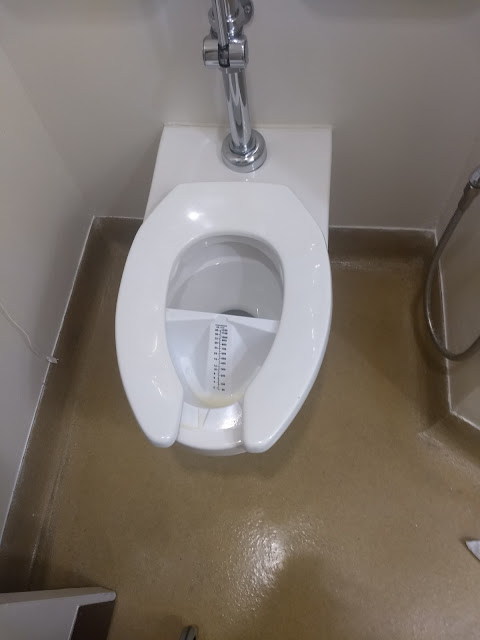 Notice the measuring cup. Part of the monitoring service and one of the great joys of being a nurse. I am sure that is the prime reason why they get into the profession. I would have to say that for all three hospitals I have been in during the past few years, the nursing staff have been fabulous. 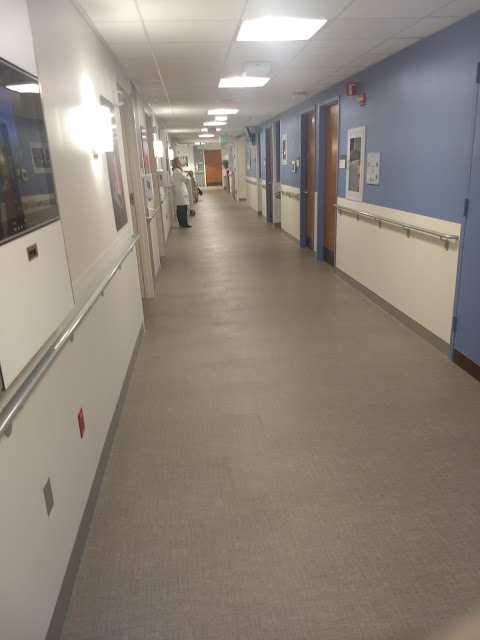 I was admitted on a Tuesday evening and on early Friday morning I managed to get out of bed by myself and walk down this corridor to the nursing station with my walker. This was the indicator that I had made a sudden and unexpected improvement and therefore became an object of real interest. I was re-measured and asked to do the same tests that I had performed on Wednesday.

There was an improvement in most of them which became a puzzle for the doctors. Only one thing had changed and that was stopping the statin (Lipitor) I had been taking since my triple bypass at the end of 2015. My understanding is that JH takes an approach of changing just one variable at a time and seeing what happens and of course that approach is common in many fields.

So I am an outlier and my nursing friend reckons that somebody will make a career out of me if the removal of the statin solves the problem. Even the Grand Poobah of Neurology came over to take a look at me. Or gaze with rapt admiration, take your pick. He was a kind gentleman who took the time to answer a list of questions that Marianne had compiled. Over the years I have realized that the people who really know their stuff can condense complex issues to understandable answers for the lay person. He had that knack. 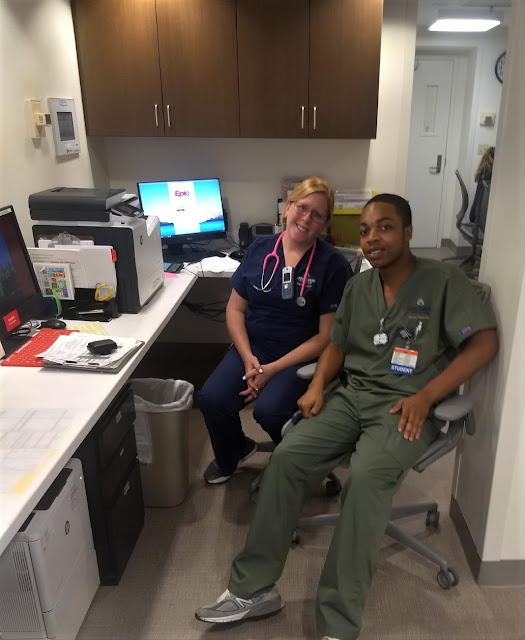 One of my nurses and one of my clinical technicians. The young bloke has an amazing ability to toss waste objects into the bin. Never misses. People always surprise you with their talents. He can also play the French horn and the clarinet. 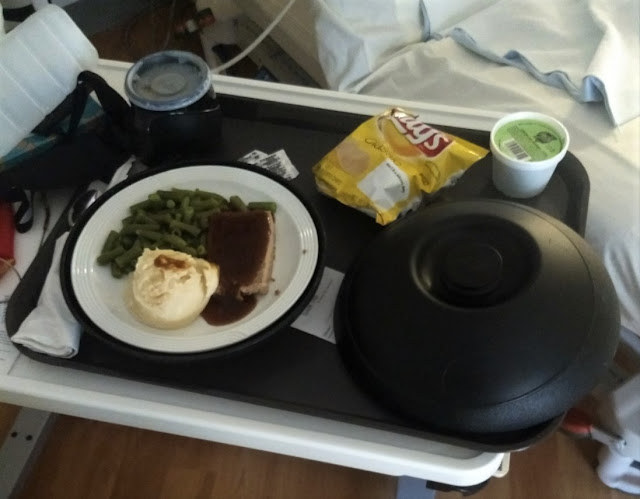 Dinner which in this case was meatloaf. It was not the best I have ever had but it was ok for hospital food. Only a couple of items I tried were awful. The biggest problem is that food loses heat while being transported from the kitchen to the room. And of course, I never got to eat my breakfast on the morning after my arrival because of constant inspections by yet another team of doctors as well as other tests performed on me. Johns Hopkins is one of the top three ranked hospitals in the USA and is a teaching hospital. I was a good subject for interns to see, poke and prod and they seemed to enjoy the poking and particularly the prodding. I was whacked so many times with small hammers that I am surprised my legs are not covered with bruises. Even tuning forks were used. I suspect over 40 people checked me out at various stages. 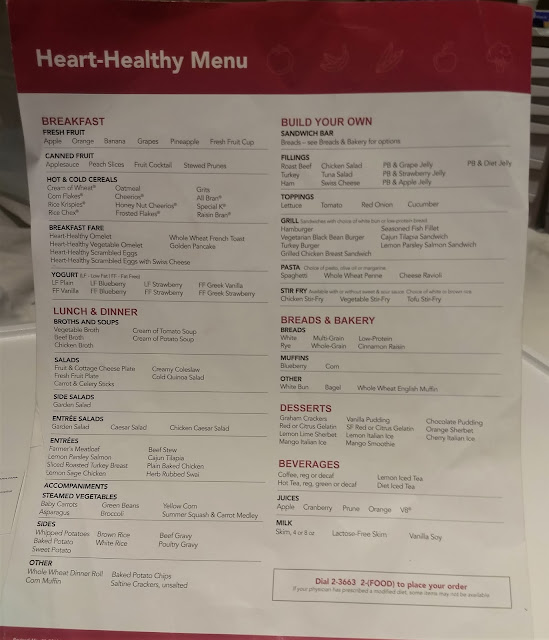 The menu. The salmon and ravioli were the best things I had. The lemon lime sherbet became my favourite. I was disappointed that champagne and caviar was not available. 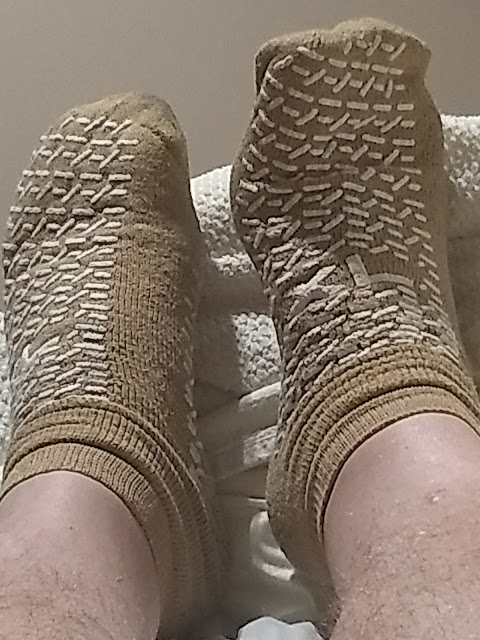 The photo you have all been waiting for. My feet in the hospital socks. The XL rating is a bit optimistic for my size 10.5 feet. 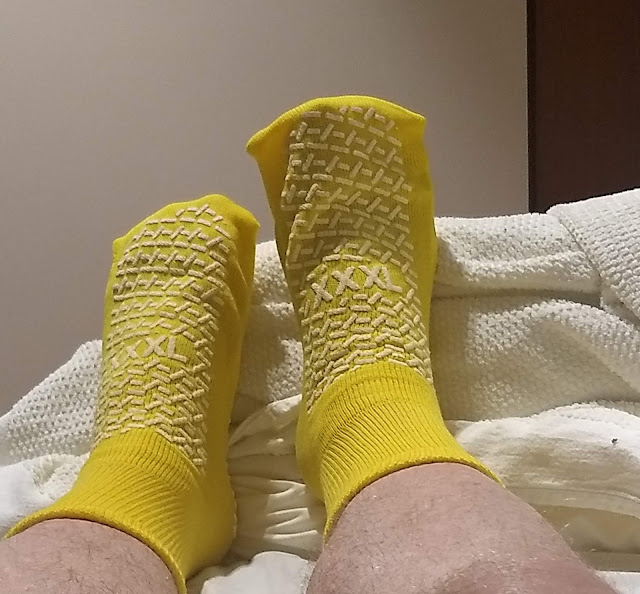 One of the nurses finally went off and found me some XXXl socks. That yellow indicates that I am special, I'm sure. 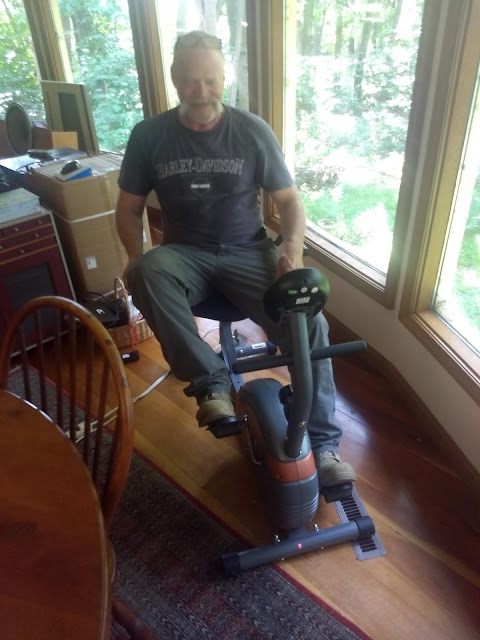 A week ago I ordered an exercise bike from Amazon. It's too heavy for me to deal with so the husband of the nurse who sent me off to Hopkins volunteered to put it together for me when we went to another friends place for dinner last night. It is wonderful to have friends like these and here he is testing the bike.

So it has been a very interesting experience and I am so relieved that a possible solution is so simple. Of course, there is a long way to go in terms of restoring my strength, but it is a start.

By the way, I talked to one of the doctors about the ER situation and she told me that JH is well aware of the problem and is looking to make improvements. It's a great hospital. One of the things that impressed me most was the friendliness and respect that all of the employees showed to their fellow workers, no matter their position. That's very difficult to achieve in any organization.

I thought I would let you know what happened since. My blood tests showed extremely high levels of Creatine Kinase (CK). Recommended level is between 39 and 108 I U/L and mine were approximately 8800. The level has gone down in subsequent tests but I am still above 7000. The doctors at JH are arranging for me to get a treatment called IV/IG. You can read about it here.

I will be given the antibody fluid in small doses over a period of four to five days since there is a possibility of blood clots if they do it all in two days. If you have had heart surgery they are more cautious. The procedure starts with a saline solution and then when my body is hydrated, they introduce the fluid. Each day takes three hours and the treatment will be done at the local hospital.

I should start to feel improvement after three or four days. I may need another course of treatment after three to four weeks if necessary.  As well as seeing the resident doctor, I was also seen by the doctor who invented the technique about 10 years ago. He was very friendly.

My case is apparently quite rare but if you hear of somebody who takes a large statin dose and complains of heavy legs and difficulty walking, get the CK level checked.

I have now completed two week-long treatments and my improvement seems miraculous. Today I walked 2.5 miles around my community including quite a few hills. Getting up from seats (and toilet seats) is much easier. I can stand for much longer periods and my upper body strength is much improved. I can now reach up into our highest kitchen cabinets with my left arm which was not possible before with arthritis in my shoulder. I submit a daily journal to Johns Hopkins and it seems like every second day there is some noticable improvement to report.

Two weeks ago I went to aqua therapy and as part of the hour-long session I did the jogging on the spot exercise. When I first started aqua therapy a few months ago I could do twenty steps. That day I did 500 without any trouble. Incredible!

There is still a way to go, particularly with my agility, but I appear to be returning to normal.