I have joined the local Men's Shed which will be subject of a future blog entry. It's an organization devoted to retired men that gets them out of the house and / or gives them some company when they have become widowers. The HVB Men's Shed has several large sheds filled with all sorts of tools that were donated. Often they get a call from a woman who says 'my husband died and there are all sorts of tools that he used that I need to get rid of'.

I think it is a wonderful idea and I figured that being a member will be handy when I want to build something or other and also just as a way to meet people. I have attended twice and at the last meeting at the 'smoko' where the group sits around drinking instant coffee (Moccona), it was announced that the group would be running a sausage sizzle at the local recycling centre next to the dump. The bloke across the table from me was in charge and I asked him he would mind if I came along to take a look. He was fine with it.

I turned up at about 9 am and was shown where to get a seat and made very welcome. They do this every two weeks and make some money for the club. They start before 8 am and finish at about 1 pm.
Sausage sizzles have been in existence for over twenty years and are very common at the Bunnings hardware stores (Home Depot / Lowes). The group used to do their sizzles at Bunnings but the current rules that Bunnings enforces have stopped the Mens Shed blokes from applying. For example, one of the rules is that workers have to stand for the entire time, which is impossible for some of them, particularly as the sizzle has to operate from 9 am to 4 pm. 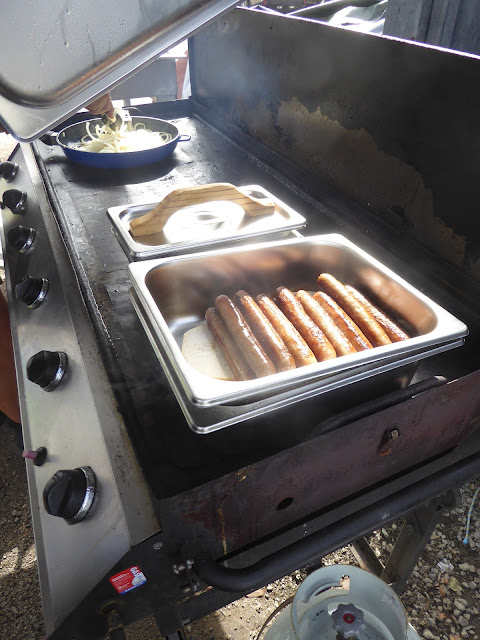 Hotdogs are used in the USA but in Australia, the feature is a long skinny sausage. These in the photo have already been cooked and are kept hot in a bain-marie. At the back of the photo, you can see the onions being prepared. The 'boss' prefers that the sausages and onion are not charred so the cooking process is slow and gentle. No flinging the sausages on to a red hot grill here. 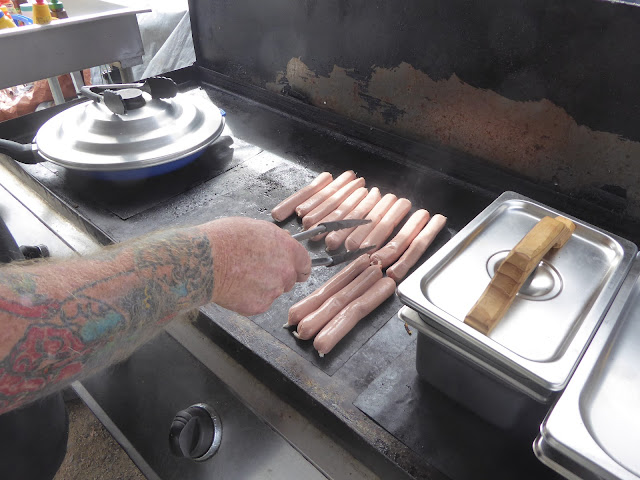 There was a team of four. One cooked, another made sure there were ingredients ready and loaded up the sandwich. 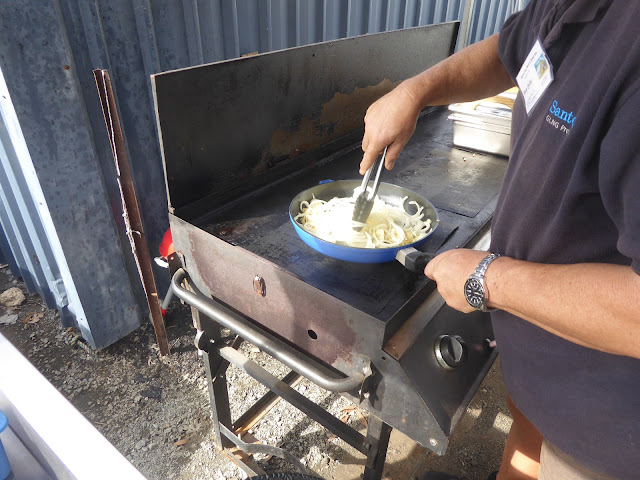 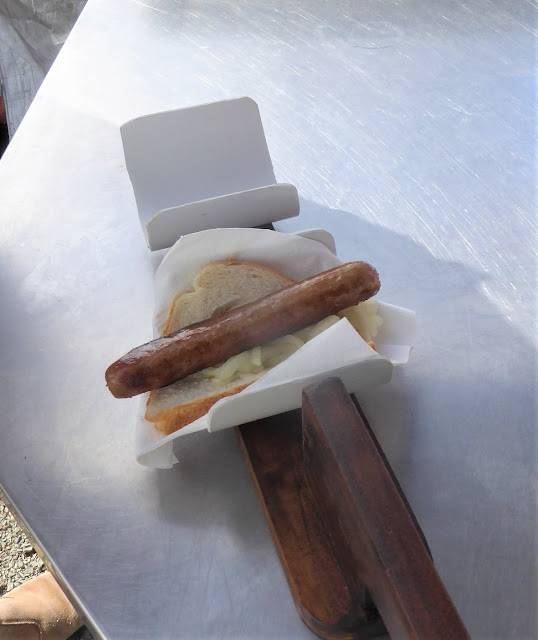 Instead of a bun, the sausage comes to rest in a slice of white bread. The onions have to go below the sausage. The boss prefers to get the Aldi sausages and also their thicker bread. His job was to get the bread ready in a special holder that could hand up to four sandwiches at once.
I was told that a few years ago somebody slipped on some onion at Bunnings and broke her hip. Since then, Bunnings insists that the onions go on first. There was a huge outcry at the time, but the hubbub has died down. The Bunning's rules are needed to satisfy health regulations and a Bunnings employee will inspect the sizzle every hour. Nobody inspected our Recycling Centre tent while I was there.
There was some discussion in the group about advertizing that their onions were 'non slip'. 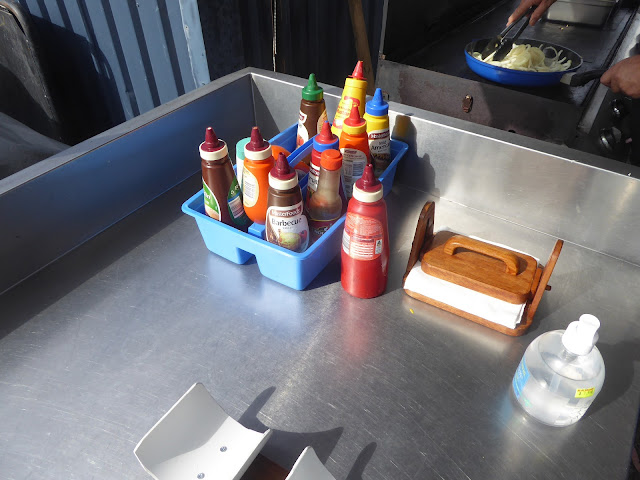 A supply of condiments. Each sausage combo costs $2.50 and the fourth bloke handles the money. Some days they get a lot of customers but not on other days. They also sell cold bottles of water and soda / soft drink. 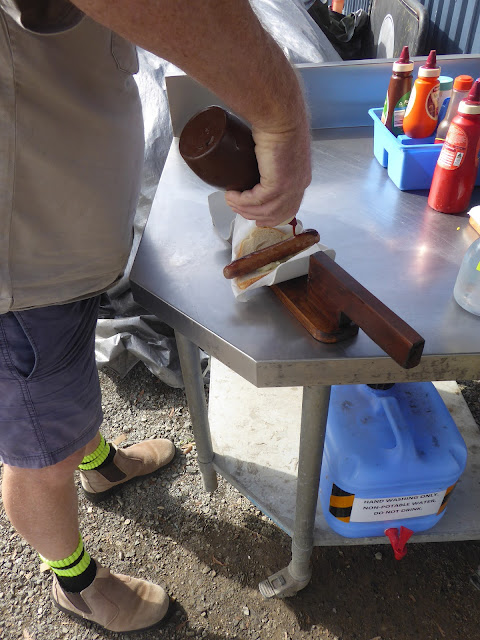 The buyer applies whatever they want. However, if you are a politician, you need to be able to handle your sausage. There was nationwide outrage when they fail as can be seen in this article. 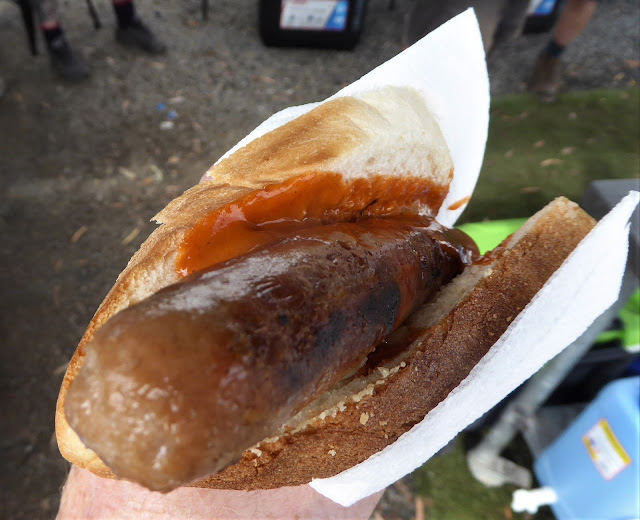 Naturally, I tried one with a medium chili sauce and it was pretty good. I prefer a roll to the bread, but a sausage is superior to the hotdog.
The sizzles were all closed down in the initial stages of the Covid-19 outbreak. In states that have low or zero case numbers, the sizzles have been allowed to function again. 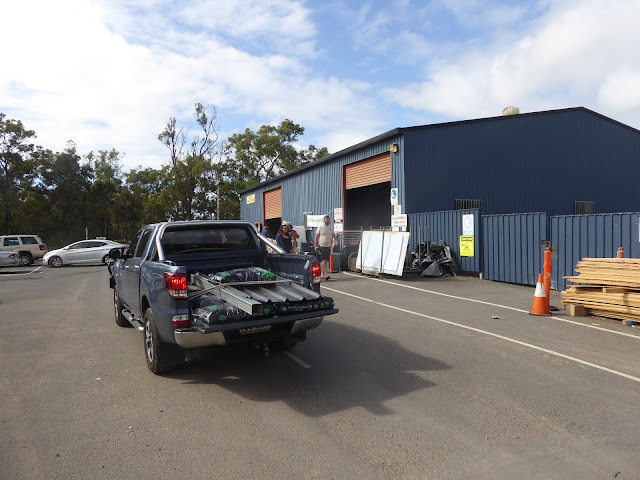 The recycling center where you wander through a gigantic op shop / Goodwill filled with stuff that was not quite bad enough for the dump. I visited it a couple of weeks ago and don't plan to return. 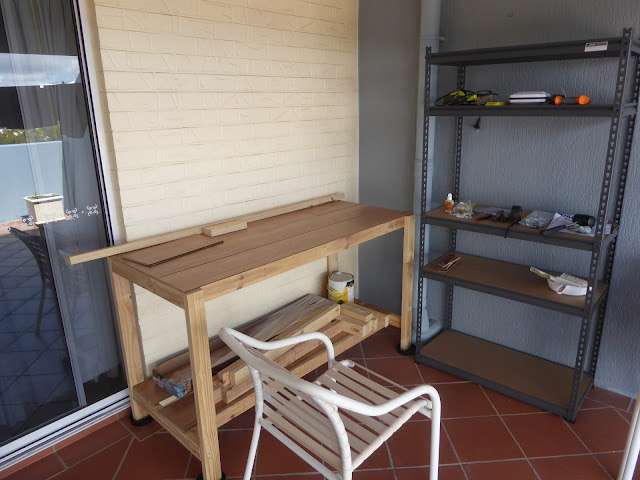 The urge to build something has resulted in this workbench and also the erection of a shelf kit on what we call our back verandah. Since I have to carry everything up 35 steps, I have to be careful in choosing what I buy.