When you are young you know that the day will finally arrive when you turn 65 and you officially become an old codger. Well it has happened to me and for my 300th blog of my retirement I thought I would tell you about it. Most people really like to give presents but there are a few people who much prefer receiving presents and I am one of them. As well as the usual bottle of Pierre Ferrand cognac Marianne gave me a bottle of local honey and a big bag of Granny Smith apples. Robin gave me the complete Black Adder DVDs and last and not least, the complete Rumpole. Fourteen DVDs at three episodes per DVD.

By the way, for Blackadder and House fans, you might like to watch this interview with Hugh Laurie.

or some of the famous 'cunning plan' lines

It was a rainy day so I didn't feel like going outside and cutting up more wood so I relaxed for most of the day listening to music. As usual, Marianne made a special dinner for me and here it is. 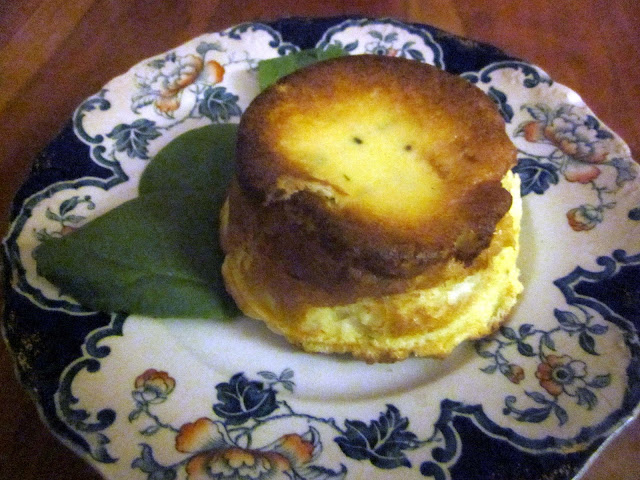 First up, the goat cheese souffle. 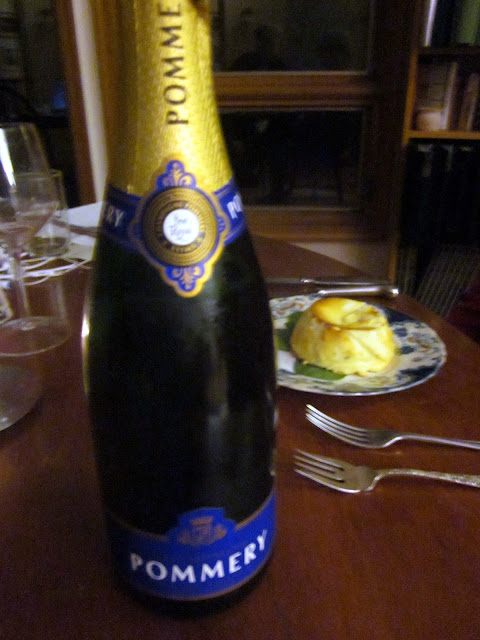 Washed down with some bubbly. I can't remember having Pommery before and we both really liked it. It is quite a full bodied champers. 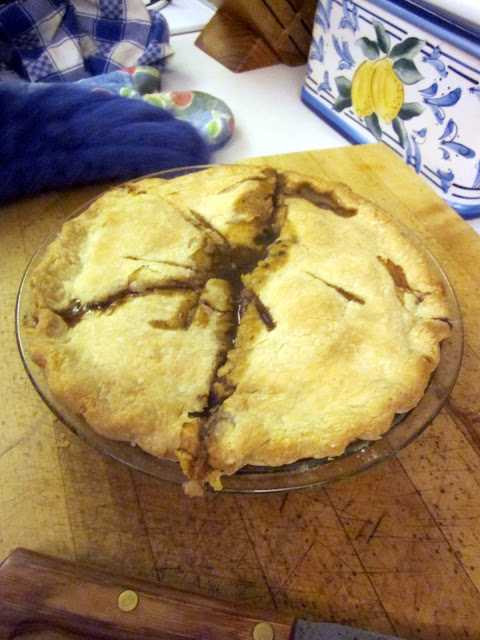 When Robin was a child she had one of the American Dolls. Somehow there was a cookbook involved that had a colonial  times recipe for a beef pie. Robin made it and it was so good that we have it every now and then and I selected it for my birthday dinner. 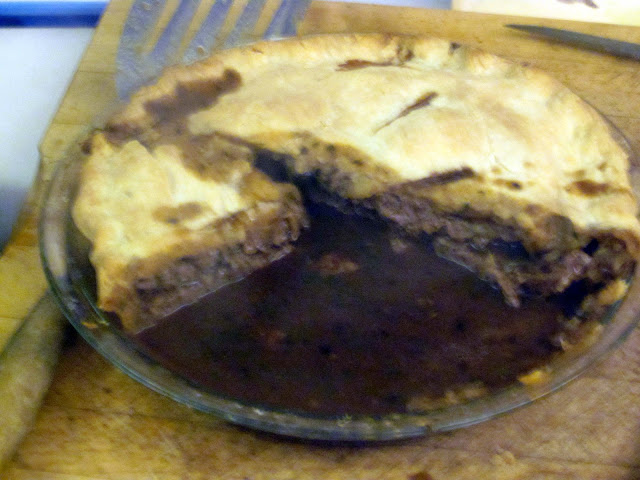 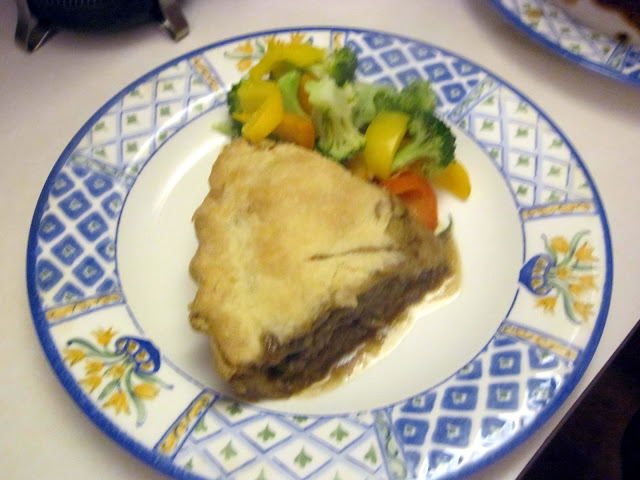 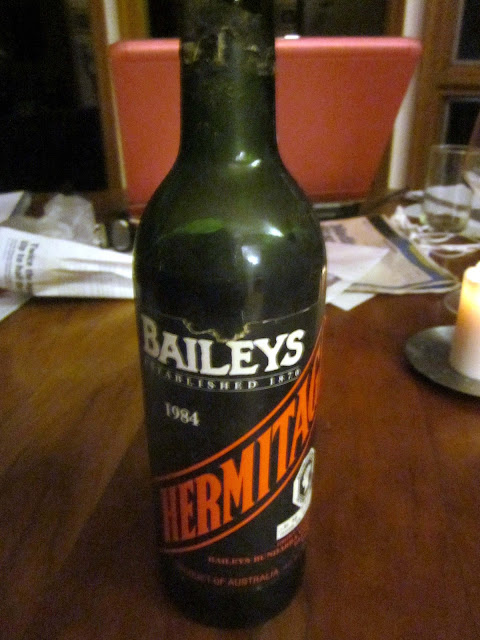 Back in about 1988 we went on a trip to Australia and I brought back two half bottles of Baileys Hermitage. Baileys is a winery just outside Glenrowan in northern Victoria and they are famous for their Liqueur Muscats and Tokays. They also make red wines that are renowned for their longevity. This bottle is a shiraz from 1984 so it is 28 years old. The wine had definitely reached its peak but I didn't get the sense that it was over the hill. Perhaps I am not over the hill yet either. 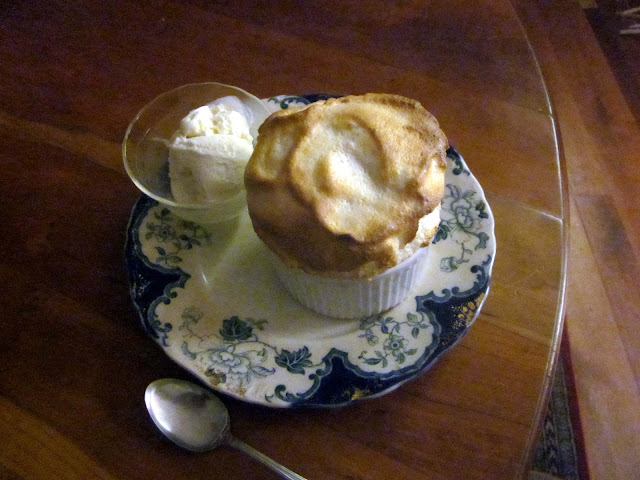 Finally the cumquart souffle for desert. Back when I turned 57 I had a small role (Karpathy) in a production of My Fair Lady at the theatre at the College. I was telling one of the cast about having a souffle for desert and I sent her the recipe.

It’s time to start preparing the magnificent feast for tonight’s international party. Wouldn't It Be Loverly to have a soufflé for desert? It will fascinate everyone. Not since the Queen of Transylvania came to Elkton have we eaten such a …….

Step 1: Earlier in the day, butter and sugar the soufflé dishes, one for each person, and put them in the fridge. Traditional soufflé recipes call for paper collars to keep the soufflé together when it rises. With this fridge technique, the soufflés rise straight up with no mess.

Step 2: Melt the 3/4 cup of marmalade or preserve and add 1 Tablespoon lemon juice.

Step 5: Separate the egg yolks from the whites. Save the yolks for eggnog.

Step 6: Beat the egg whites and 1/8th teaspoon salt until soft peaks form. Sprinkle in
3 Tablespoons Sugar. Beat  until whites stand in stiff peaks. Sing I Could Have Beat All Night

Step 7: Gently fold into marmalade mixture with a rubber spatula. You don't need to mix in every bit of egg white evenly or they may deflate.

Step 8: Spoon into the soufflé dishes.

Step 9: Put dishes on cookie tray and bung in oven. Sing Get Me To The Oven On Time
Bake about 15-20 minutes or until golden.

Step 11: Serve with Peter Lehman late picked Semillon wine. Open 24 hours before and recork before refrigerating. It tastes and smells much better this way.

Listen to ecstatic comments and moans from assembled guests. Have them sing You Did It