We arrived in Pitlochry late on a rainy day. The hotel (glorified B&B) was fine but after a brief walk around town we stopped off at the local supermarket and bought a half bottle of Glenfiddich. Scotch whisky has never tasted so good as on a cold rainy evening in Scotland. 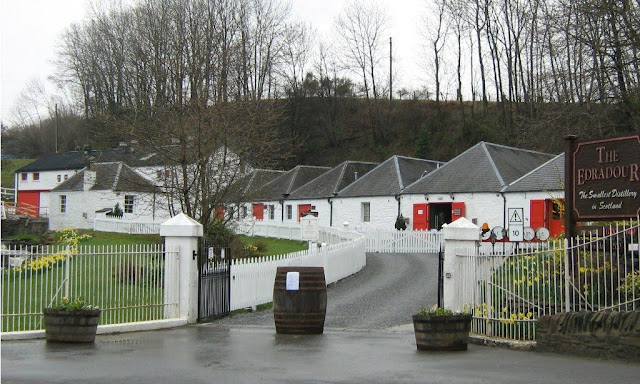 We only stayed one night at the B&B before heading north to Inverness, but we did take the opportunity the next morning to visit the smallest distillery in Scotland, Edradour. 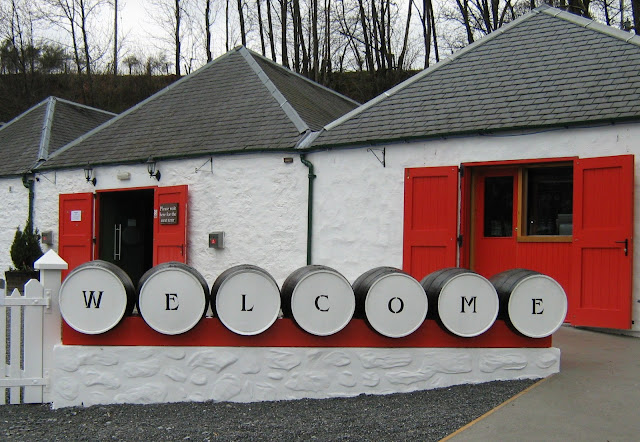 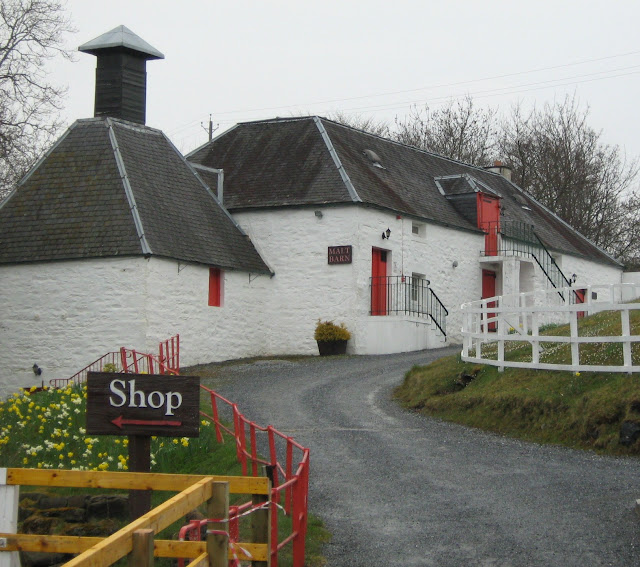 The pagoda marks the building where they used to do the malting of the barley using peat smoke. 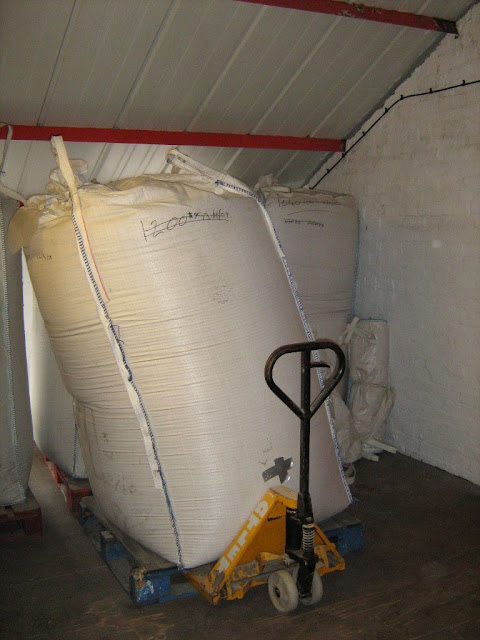 Nowadays, Edradour does not do its own malting but simply buys the pre-peated malt from one of the large malting factories. Most distilleries no longer make their own malt, and even if they do, you can't tour the malting building because of safety issues. This bag weighs about 500 pounds. 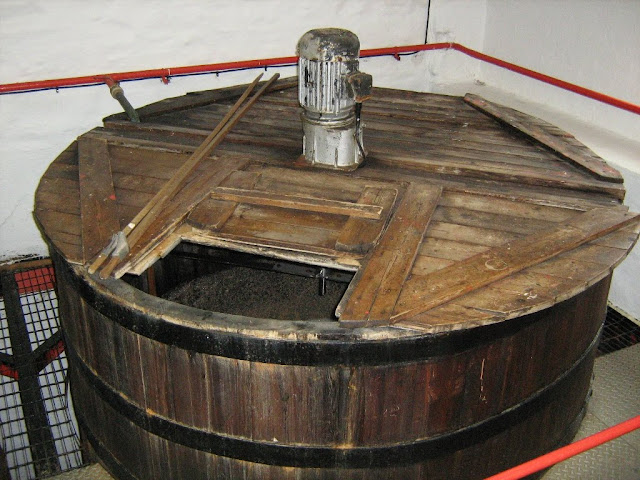 The large mash tun where the malt soaks in their special water that comes down from a spring in the hills above the factory. They add a brewers yeast and eventually they have a mixture similar to beer called wort that is about 8% alcohol. 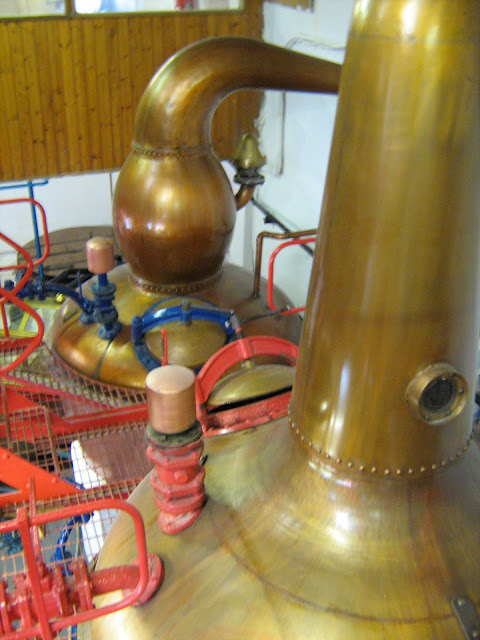 The wort then goes into the larger of the two stills where the still is heated by coils with steam in them. The alcohol comes off and when cooled, forms a liquid of about 40% alcohol. This is then passed on to the smaller still and out of this they get 60% - 70% alcohol. You can read about the whole proccess here. All the distilleries use much the same process.

I liked the whisky and to me it is a light one with a somewhat sweet aftertaste. What was unusual about the visit was that they gave you your dram as you set off on the tour, not at the end. I liked that. 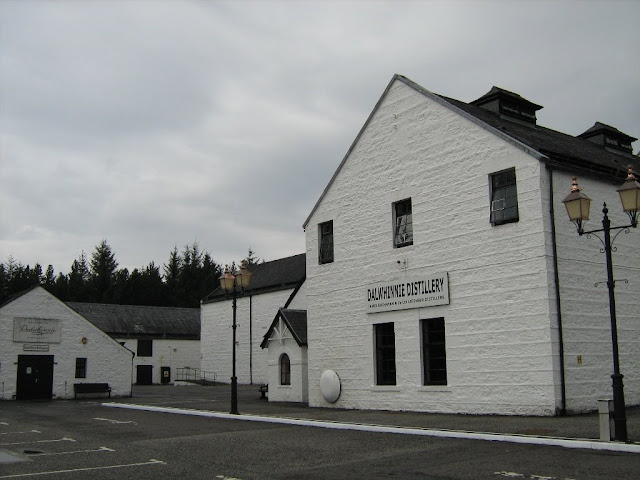 We headed north and stopped off at Dalwhinnie, but since it was a Saturday, it was closed. I've had this whiskey many times, and it is absolutely scrumptious. 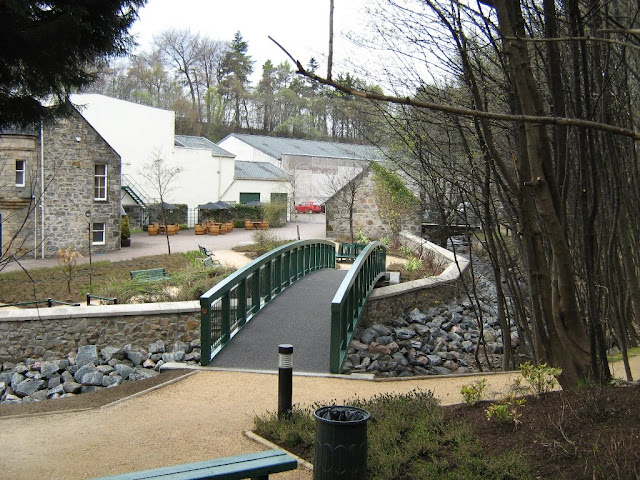 A few days later, we headed over to Speyside and started off at Glen Grant. 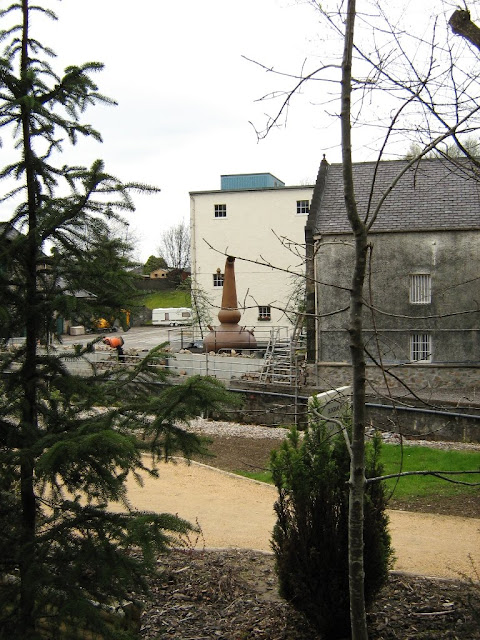 Just like wineries, whiskey distilleries have tried to make their places attractive to visitors. This one has gardens to walk around in. At this time of year, you just want to get to the distillery from the car park and back. Forget the gardens. 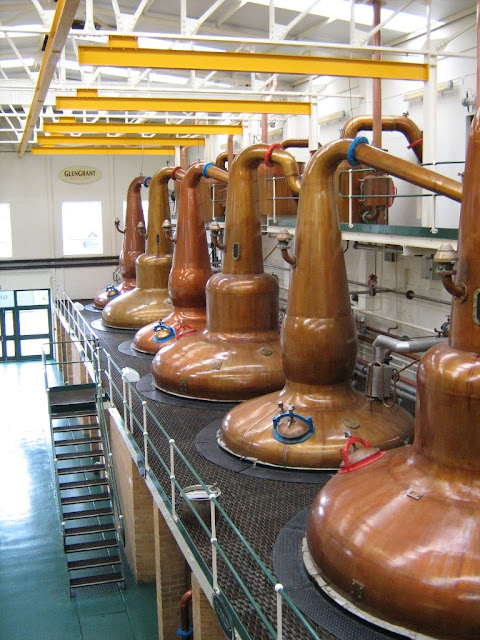 This is a much bigger distillery than Edradour. The company is now owned by Campari and the whisky is very popular in Italy. 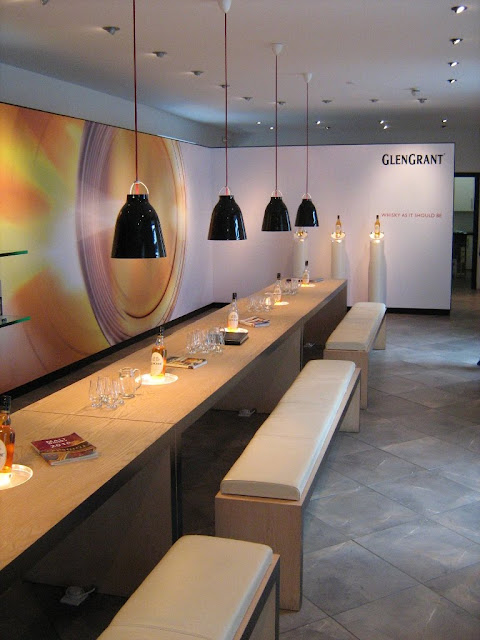 Glen Grant has a very modern spiffy tasting area where they served us samples of their very young (5 years old) from the bottles that sat on the table. Unfortunately, each bottle was lit from the bottom by a light to make it look attractive, but the heat from the light warmed up the whiskey too much. It was barely drinkable. Fortunately, they also served their 10 year old version and that was much better. The lady who showed us around actually did not drink whisky, but she could rattle off the standard spiel of overtones of honey, ginger, spices, boot polish etc as if she were a seasoned drinker. 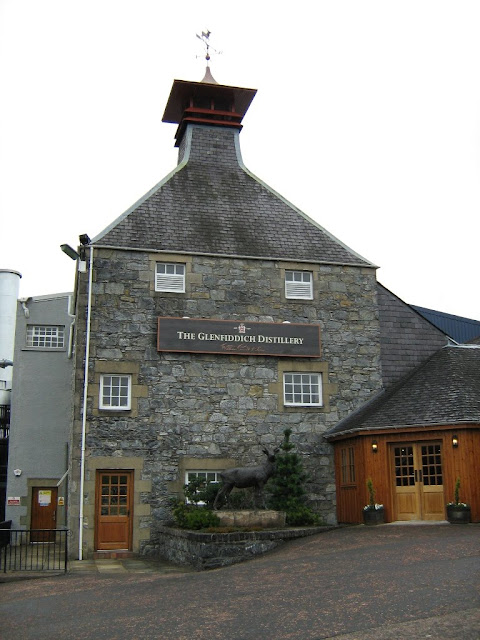 A little further down the Spey and we came to Glenfiddich. 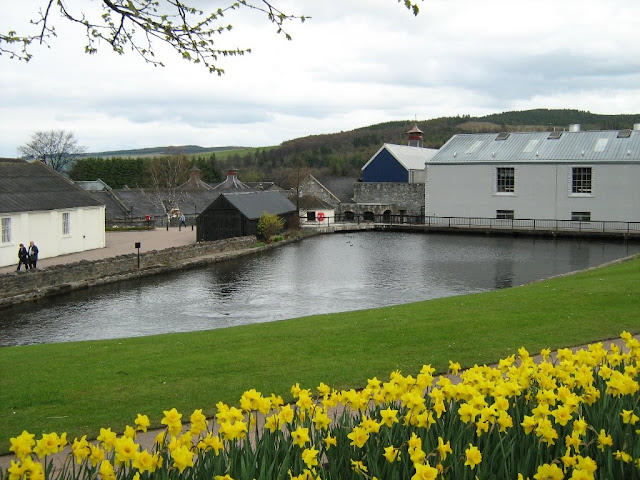 This is obviously a very popular and well known brand. The parking lot was large and there were 22 people on our tour. This was the only one of the four distilleries we visited that did not charge a fee, which typically was about five pounds that could be applied to the cost of buying a full bottle. 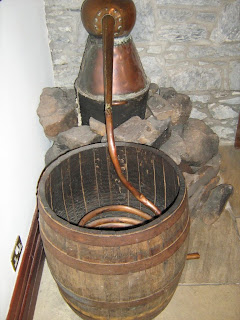 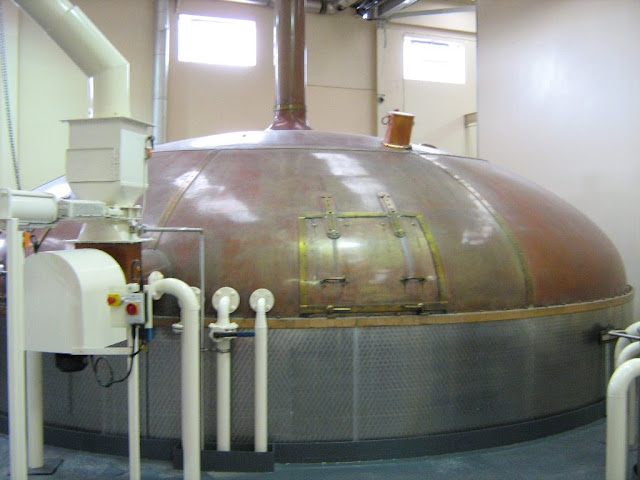 The size and quantity of tuns far exceeded the other distilleries. 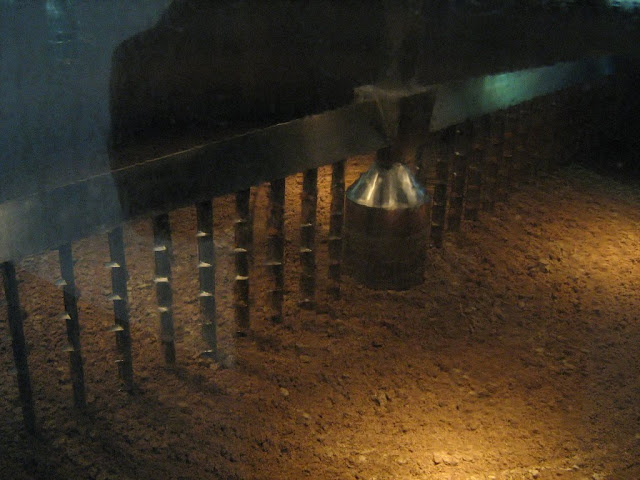 Inside a tun with a big paddle stirring the malt and water. 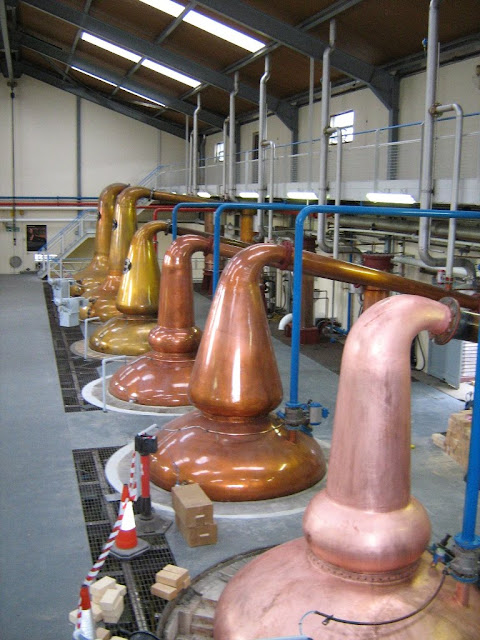 These stills are heated by flame and not steam heated. The still in the foreground is brand new.

After the tour, we were offered three whiskies in ascending age, 12, 15 and 18 years. We all preferred the 15 year old. This was a very interesting tour and it is obvious that Glenfiddich is very concious of quality and doing things the same as they have always been. They make their own malt and even have their own coopers to construct the barrels. At one stage, they took the bungs out of three barrels and let us sniff the contents. Most distilleries use a combination of expensive sherry casks and much cheaper bourbon casks. We were asked to try to guess which of the three barrels was the sherry cask, but we failed. 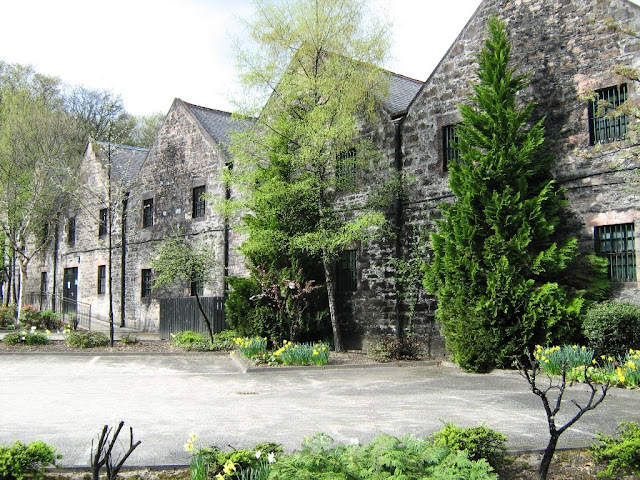 Glen Ord was just a few miles from where we were staying at Kiltarlity. 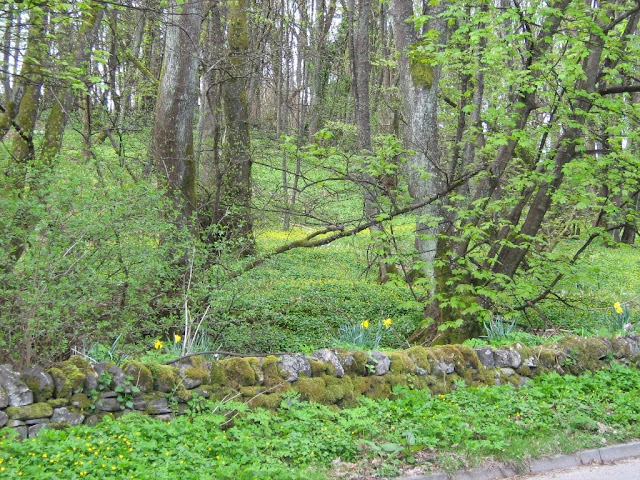 Part of their gardens. 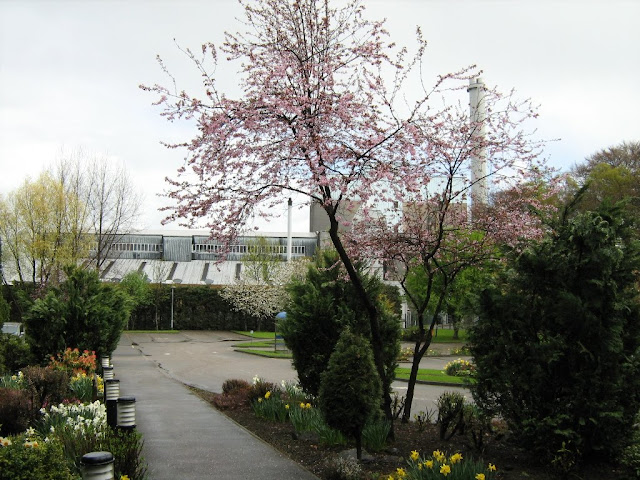 This distillery is now owned by the Diageo group, just one of about a dozen. The photo shows their new malting facility and this supplies malt to many of the other distilleries in the group. 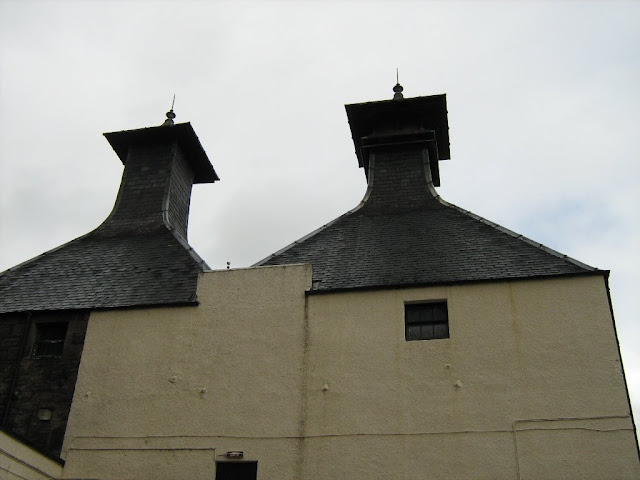 These old malting buildings with the pagoda tops are just used for storage now. 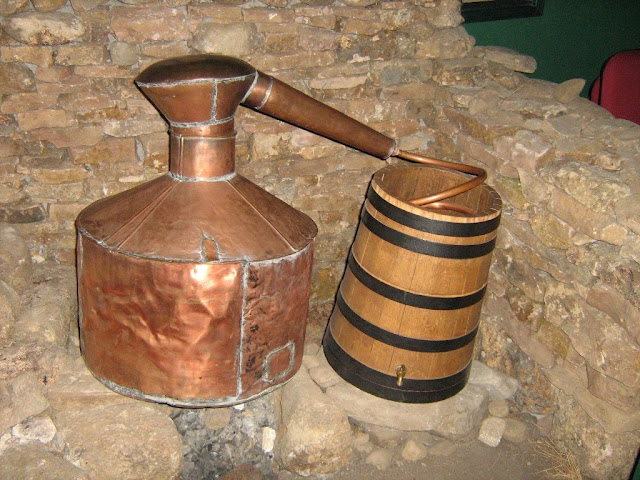 Their version of an old illicit still. 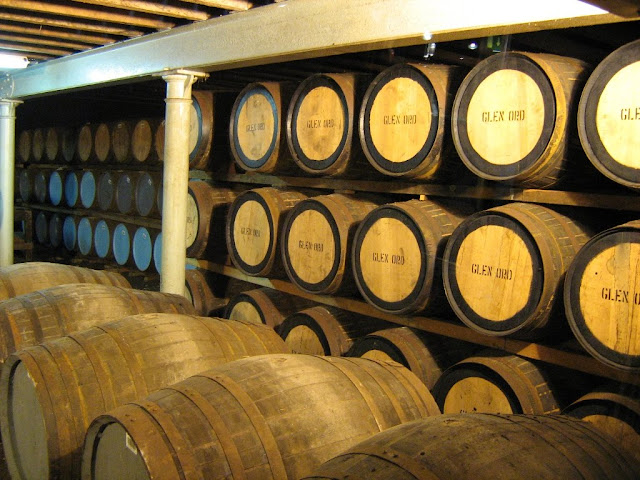 Barrels resting quietly, losing 2% of their volume every year. A ten year old barrel will only be three quarters full at the end of the ten years. The missing part is referred to as the Angel's Share. 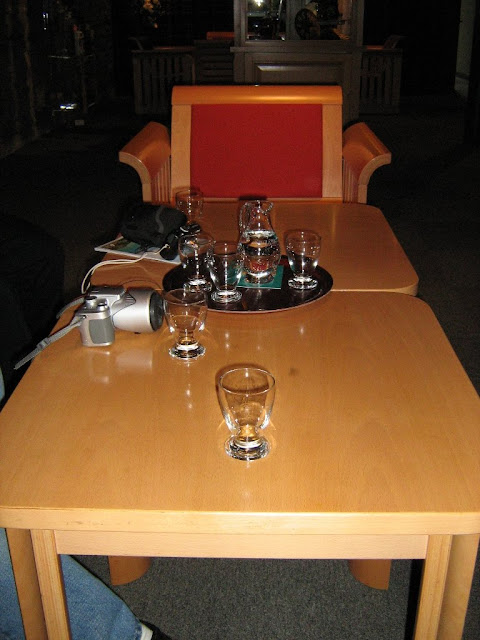 Our table after our tasting of the Glen Ord which is not for sale in the UK except at the distillery. All of it goes to Asia. We really liked this whisky, but the guide then brought us a sample of Talisker which is slightly more peaty and we all preferred the Talisker which comes from the Isle of Skye.

All of the tours were well done and interesting and the guides were informative. Each tour takes about an hour and they usually start on the hour. Not all distilleries are open on the weekend.

Overall, I liked the Talisker the best with the 15 year old Glenfiddich second. However, I still feel that a lot depends on the weather. When it is dry, I want a lighter style and the wetter it gets, the more peaty I like it.
Posted by Ray Perry at 12:01 AM