I suppose I was put off Kars by one of the scariest taxi rides I have ever experienced. It was quite busy and the young driver was determined to get to the hotel as quickly as possible. How we avoided having an accident I can't say, but we had a few close calls. My other rides have mostly been relatively peaceful, but not this one. I was glad I made it one piece.

Let me continue by saying that compared to the cities in the western part of Turkey, Kars is a pit. It seemed grimy, gritty and dirty. It becomes obvious that the government based in Ankara is not interested in putting too much public finding into this area of the country. 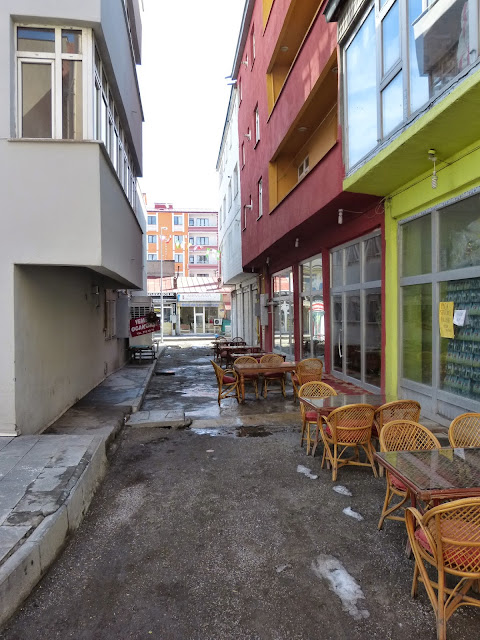 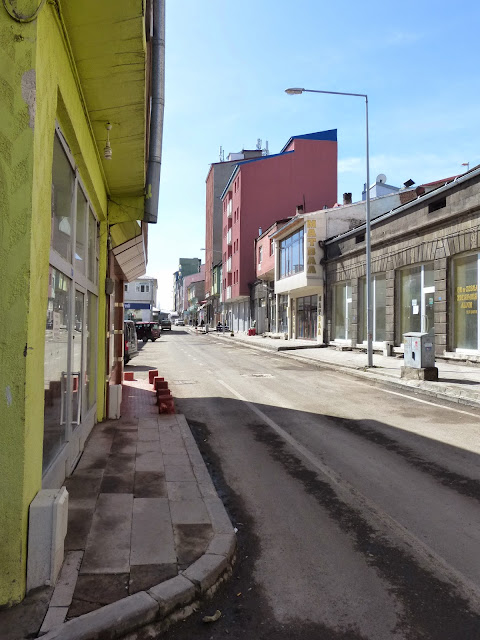 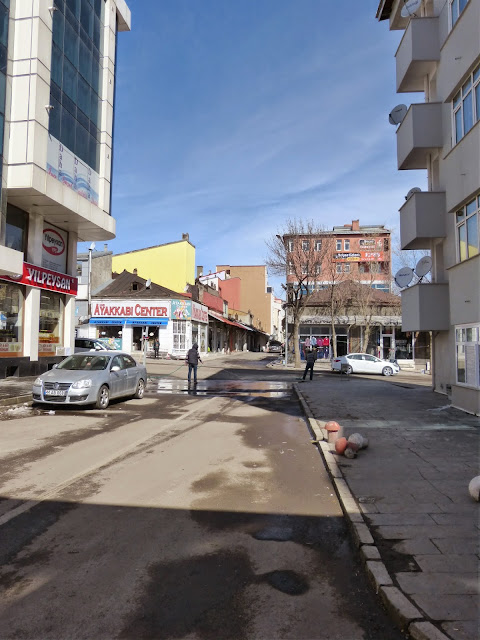 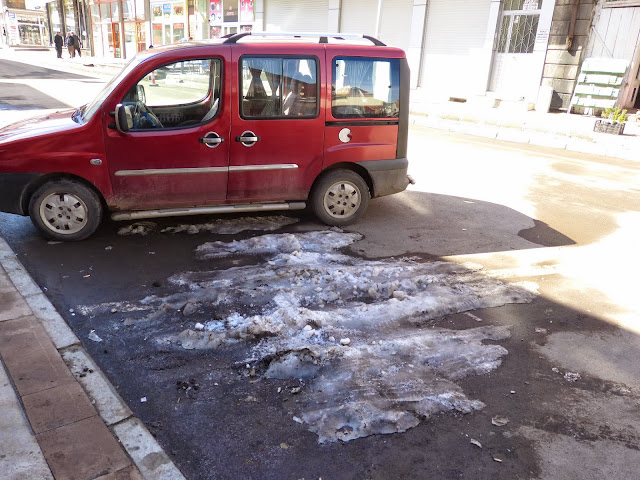 It had snowed the day before I arrived which did not help. 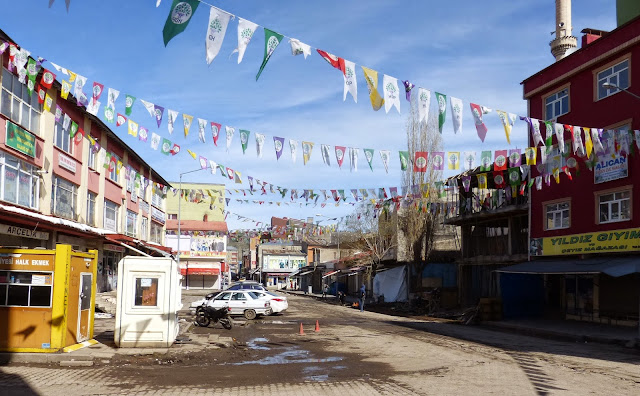 However, they were going to have a celebration of some kind because all sorts of bunting was being raised. 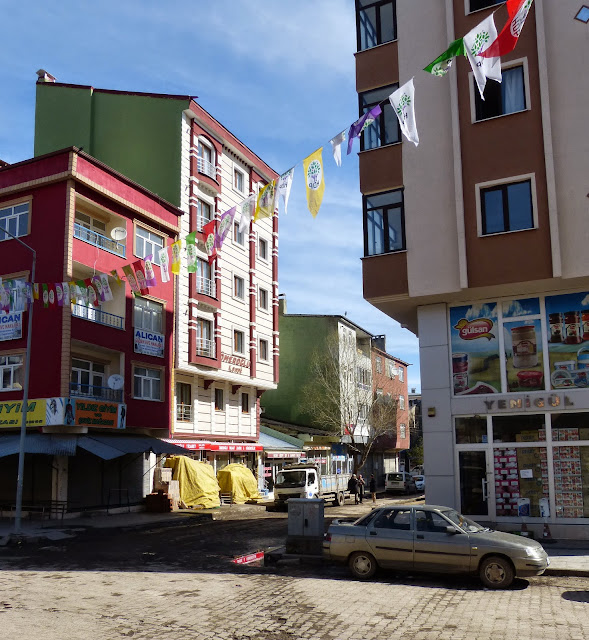 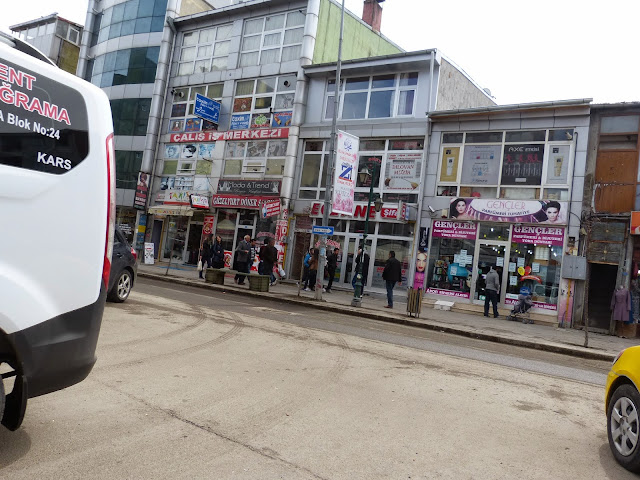 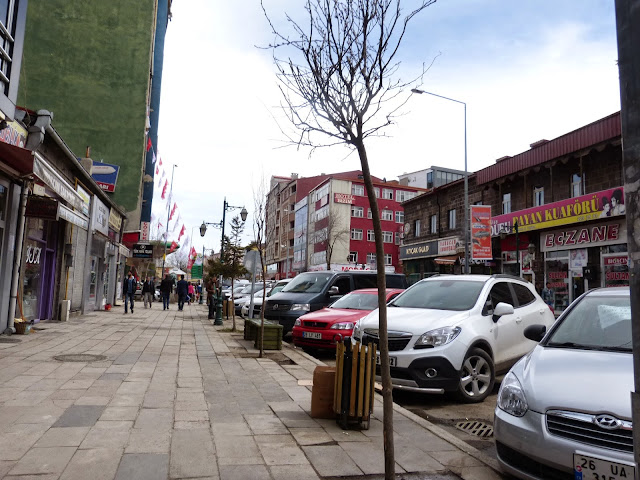 After I returned from my trip to Ani (separate blog), I went for a stroll around the city streets. 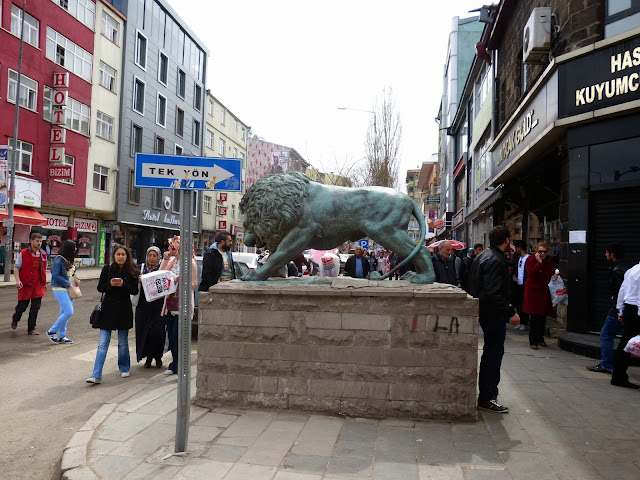 It was a Sunday afternoon and there were a lot of people out shopping. I picked some food supplies at one of the supermarkets. I went out again at 7 pm and while there were plenty of men wandering about, the women had disappeared. 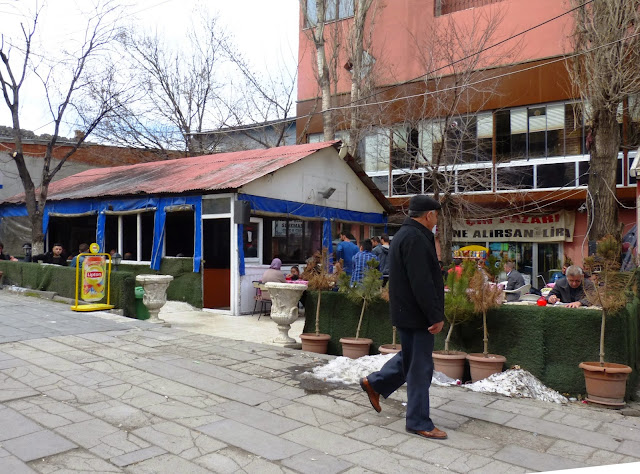 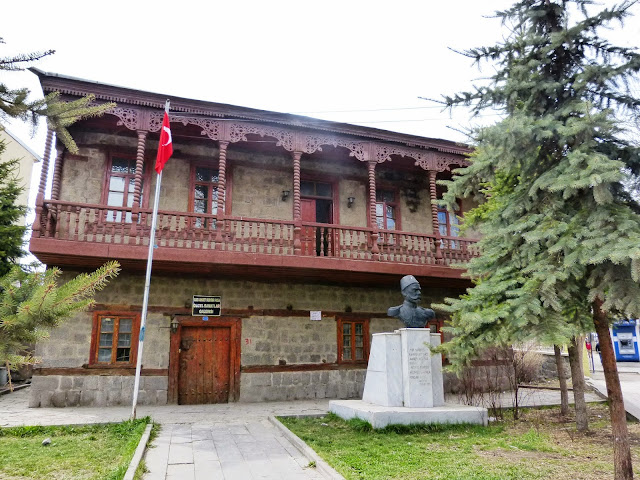 One of the Russian buildings mentioned in the Wiki article. Kars is at the junction of Turkish, Armenian, Kurdish, Georgian and Russian cultures. 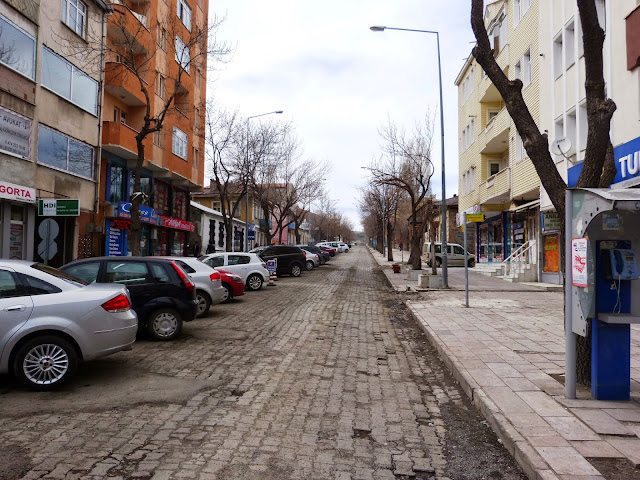 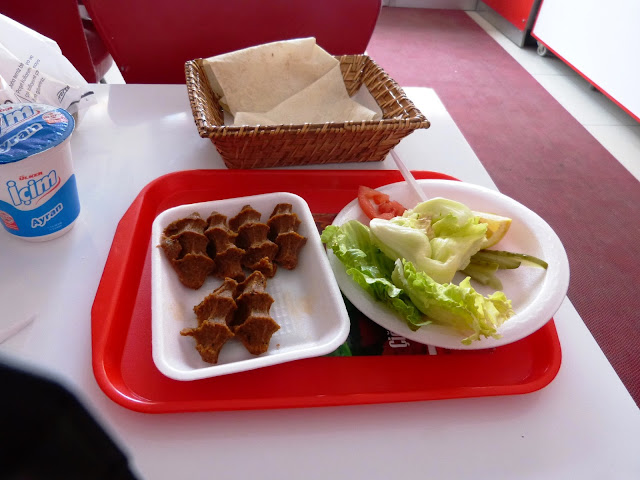 I was feeling hungry and went into a shop selling a wrap called a Durum. 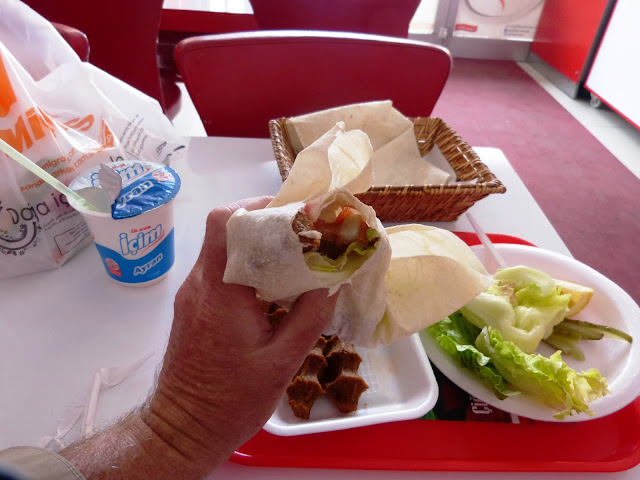 The meat inside reminded me of the insides of the cheap chorizo they sell at our supermarket. 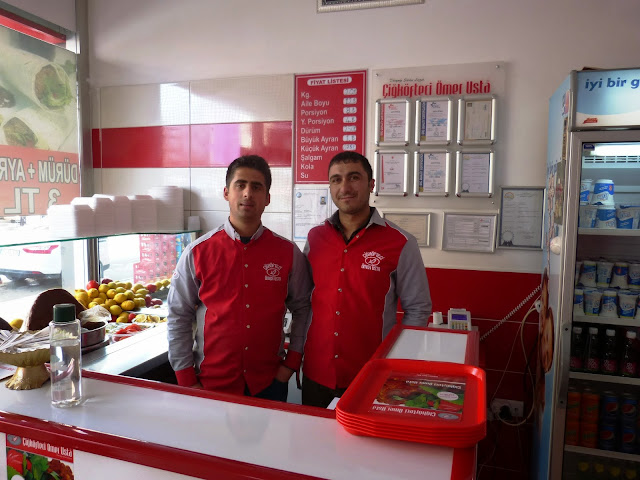 Tourists are not that common and the two guys were surprised to see me walk in. One of them asked if they could take a photo of me with each of them and then I took their photo as well. 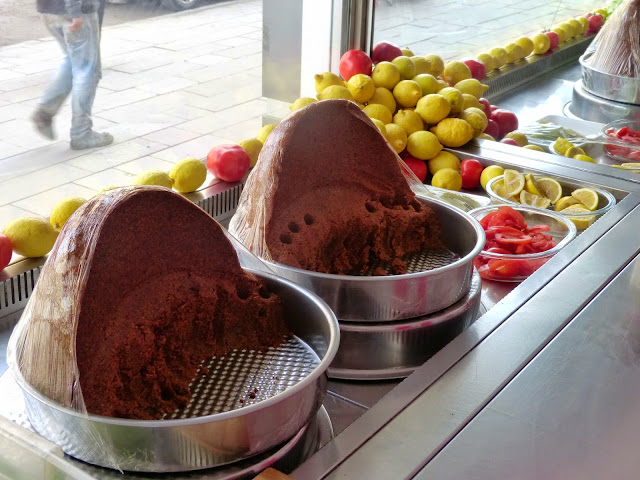 The meat mix, one more spicy that the other. It all cost about $5 including the ayran drink. There was so much, I did not need dinner. 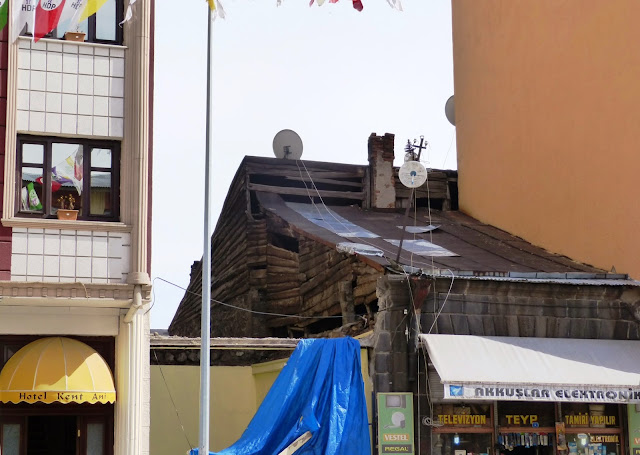 My hotel is on the left, but look at the roof on the Electronics shop. 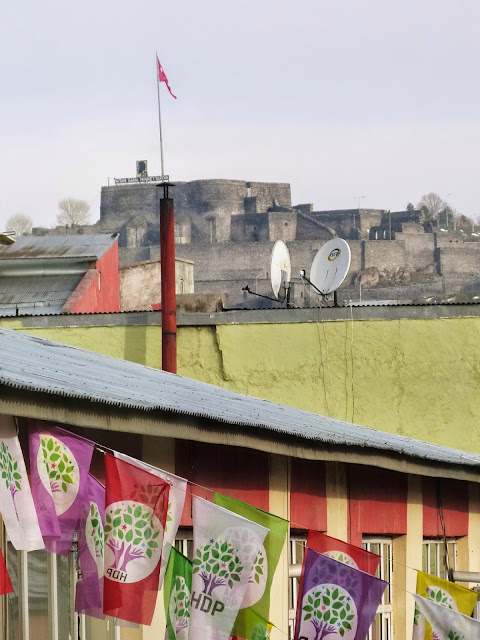 The Citadel overlooking the town. After walking around Ani, I decided to forego walking up to there. 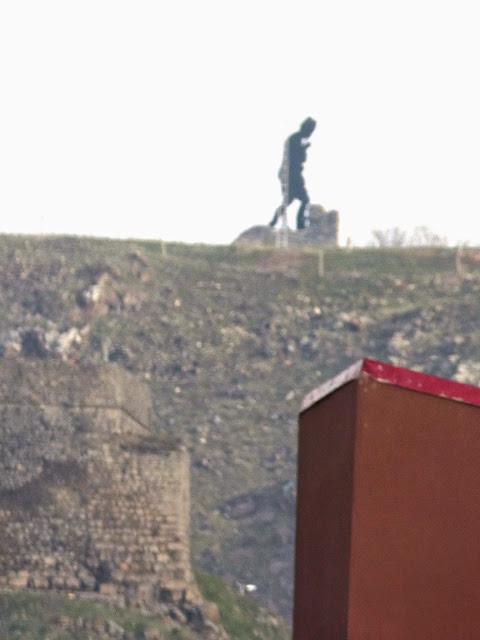 Huge statue on the hill.

I met a couple of Kiwis at breakfast who were going to continue on to nearby Georgia and then down to Armenia. Turkey and Armenia have poor relations and direct passage between the two countries is impossible.

The Kiwis had taken a train from Ankara to Tatvan, crossed the lake to Van and then used local buses to get to Kars via Igdir which lies just below Mount Ararat. If I were going to do this trip again, I would take a short bus ride from Goreme in Cappadocia to Kayseri and catch the Van Golu train to Tatvan at 18:37. I would then do what the Kiwis did to reach Kars and then travel back to Ankara on the Dogu Express.

By the way, the Kiwis reckoned that Turkey was just as spectacular as New Zealand. That is saying something.