Turkey food, a dinner and some reflections

This will be my final blog about my Turkey trip and I hope you have enjoyed them. Here are some more food photos that I took with my cell phone camera. 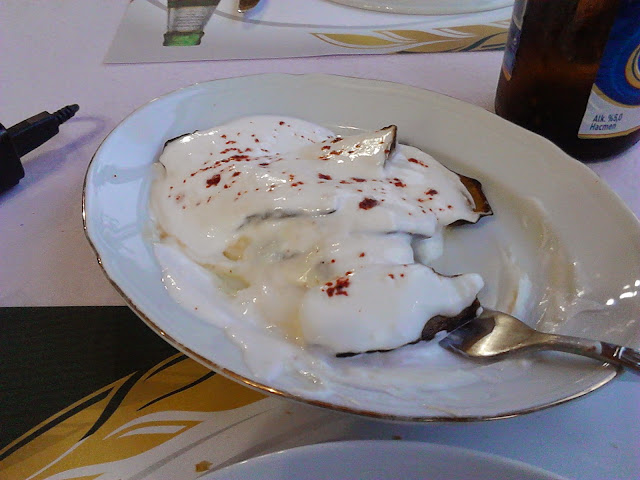 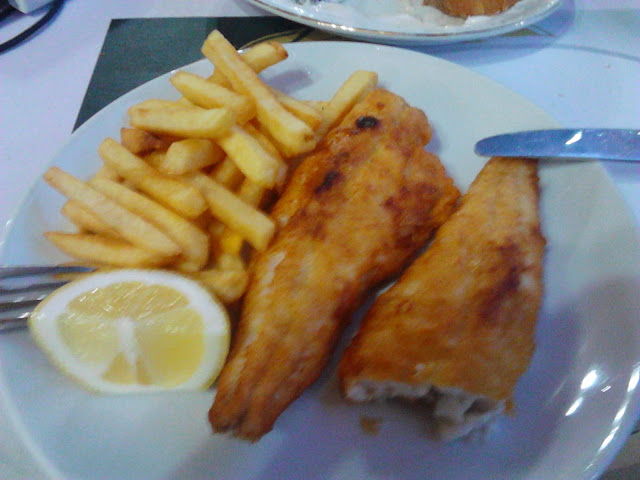 I ordered fish expecting it to be grilled but this appeared. You don't win them all. However, the fish was good. 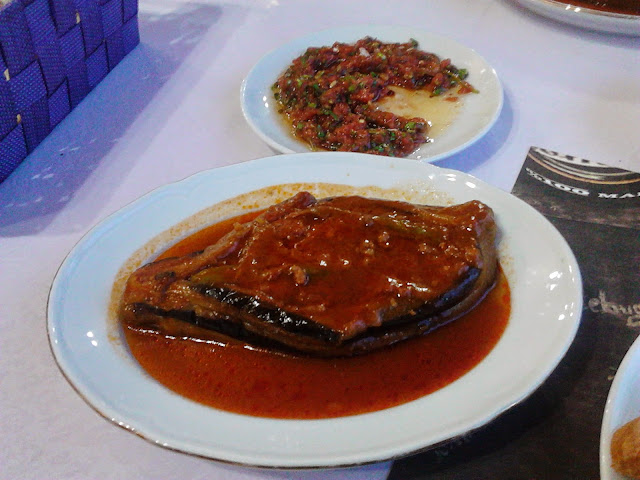 The Imam Fainted, presumably from the amount of olive oil used in making the dish. The recipe is here and I will make it when decent looking eggplant appears again at the supermarket.

It was on the menu at the restaurant at Egridir so I asked for it. The chef came over and told me that he could cook it but his wife's version was much better and she would cook it the following night for me. The Germans joined me in ordering the dish and it was really good.

In the background is a bowl of ezme which is often served as a part of a meze. It became my favourite and here is a recipe. 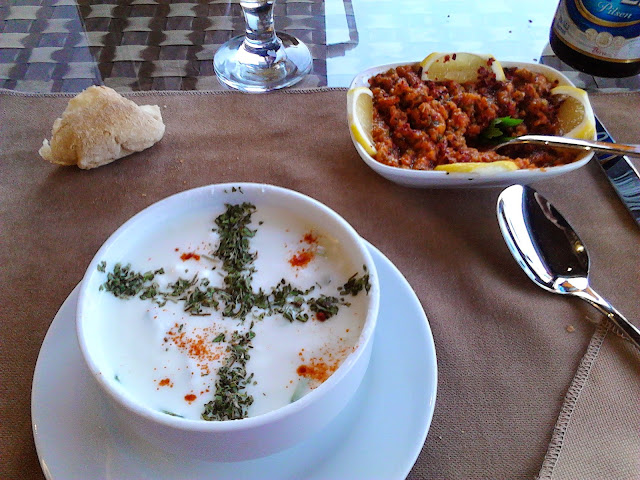 Yoghurt and cucumber with some ezme in the background. 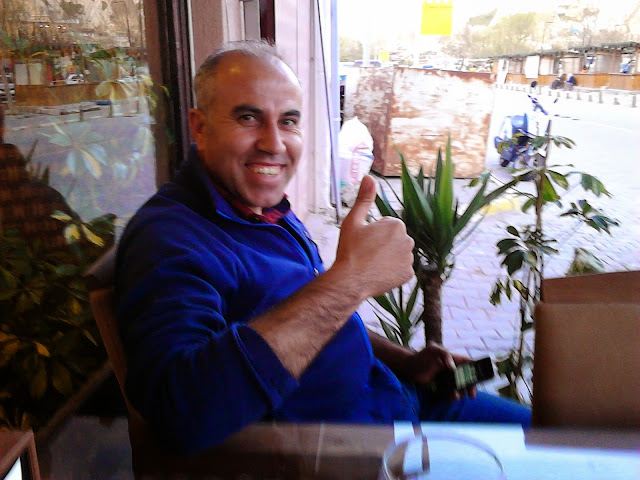 In Cappadocia I sat down at the restaurant at lunch to have a beer after returning from the Open Air Museum. I think he was the owner or he knew the owner well and he sat down to talk to me. people are just so friendly in Turkey. 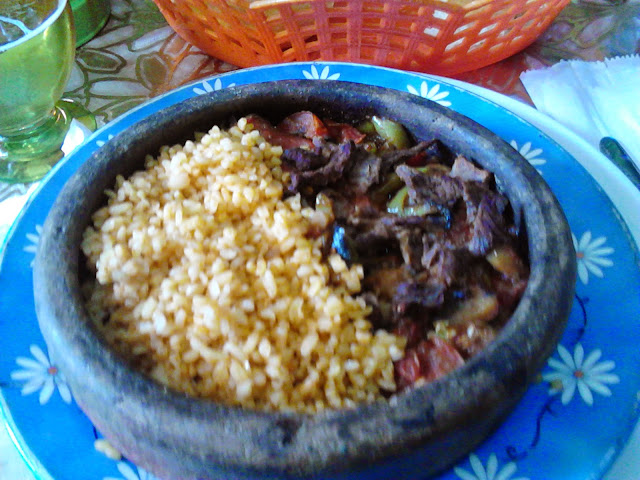 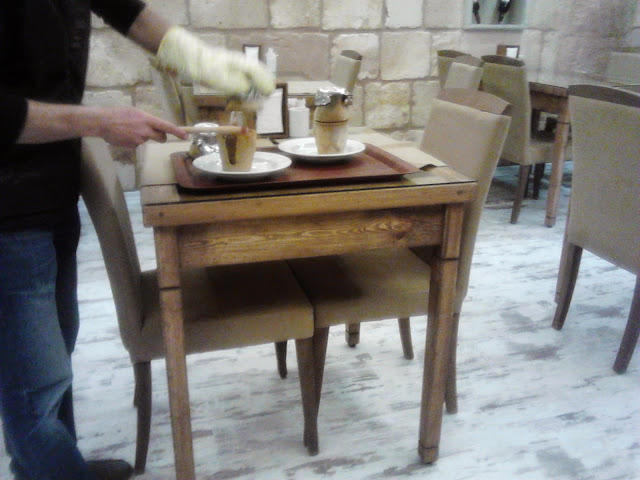 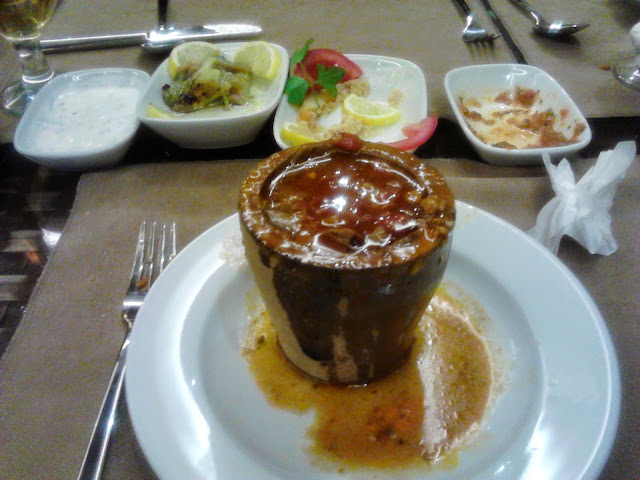 Opening the clay pot with the lamb stew at Cappadocia. 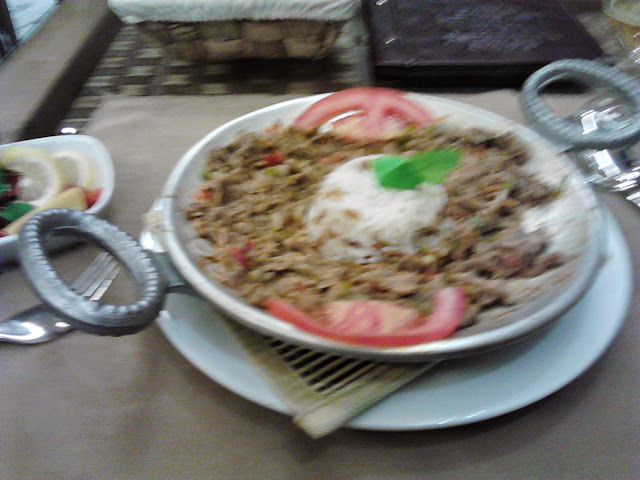 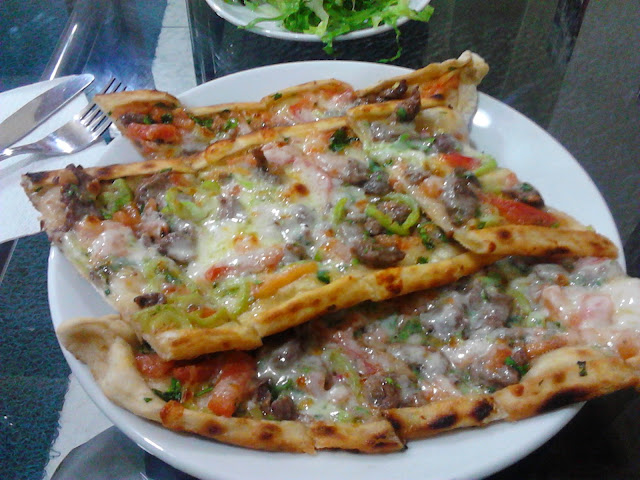 The default meal when you can't find anything else available is pide, basically a Turkish pizza. 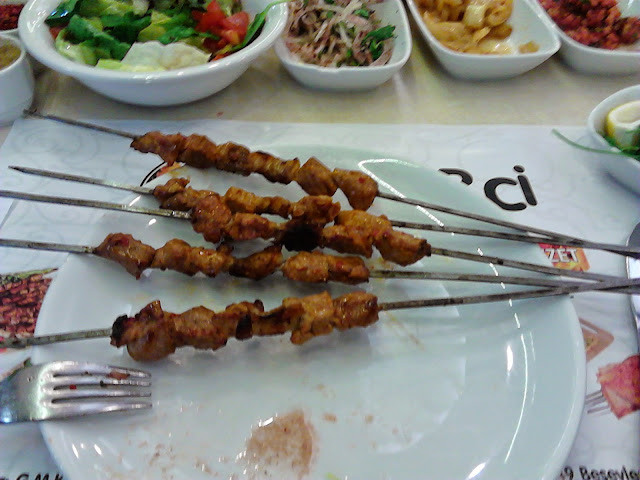 Skewers of lamb at the restaurant across the road from my hotel in Ankara. A short while after I took the photo the waiter presented me with another bunch of skewers. 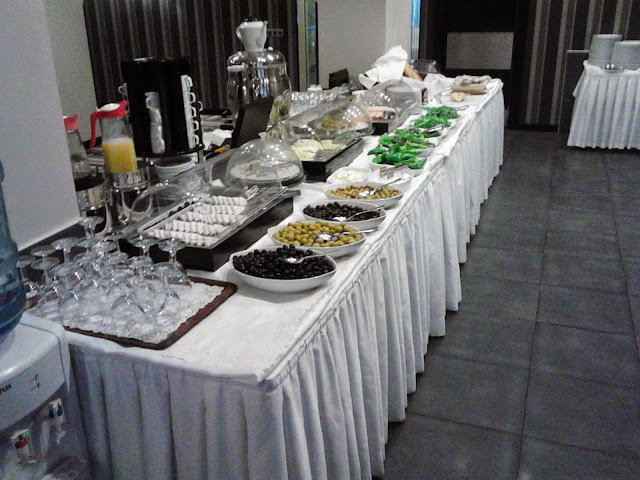 Just one of the three tables of breakfast items at the Ankara hotel. 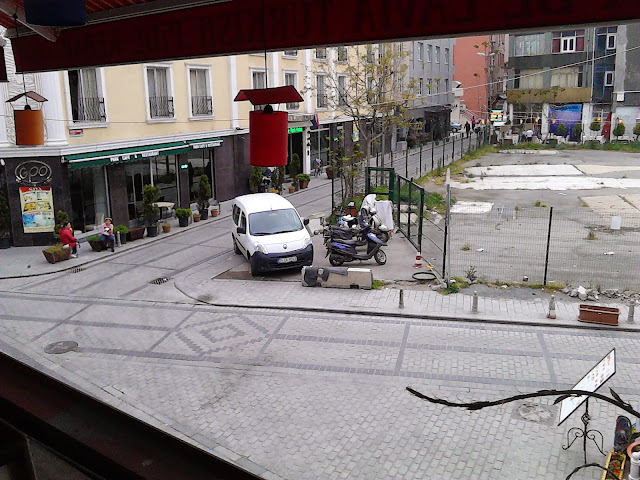 View from a quiet restaurant near my hotel in Istanbul. It was very peaceful up there watching other tourists wander by looking at the restaurant menus. 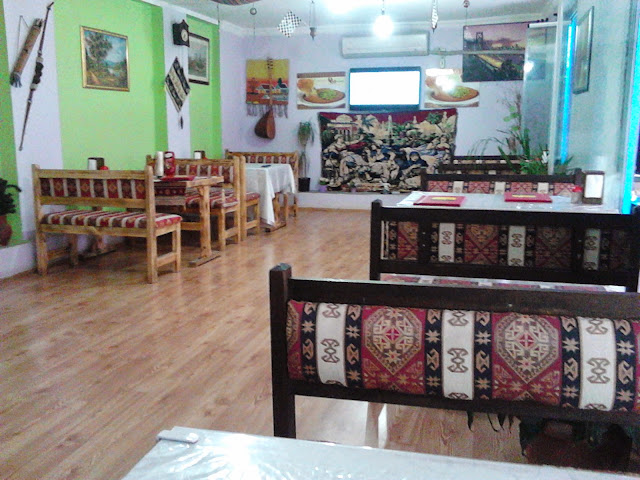 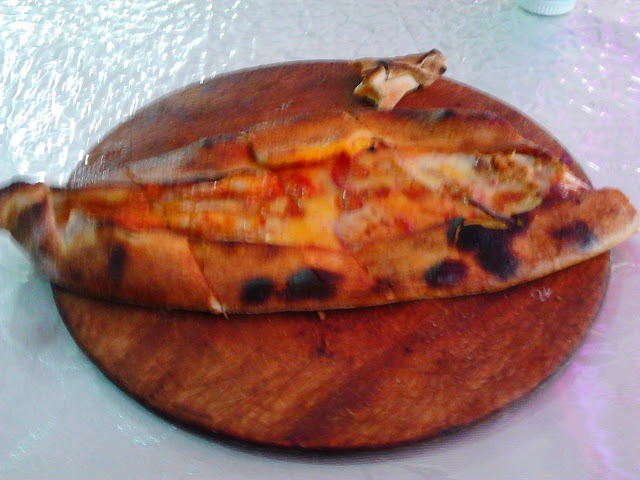 The pide at this restaurant. Sometimes I was just not feeling all that hungry but I knew I had to eat so this was easy on the stomach and inexpensive. The following night I ate in a more expensive restaurant closer to the hotel and talked for a while to four blokes from Birmingham in England. They lived in Sutton Coldfield where we did a house exchange two years ago. I suspect they had been enjoying more than a few beers for several hours.

It has been good to come home and have the usual wide variety of foods that most of us enjoy. However I was not as tired of Turkish food as I was of Asian food when I got to Sydney last year. I suppose Turkish food is so Mediterranean in style that it is not a big change from my regular diet.

I was waiting patiently in my tour bus seat at Gallipoli waiting for the bus to leave to return to Istanbul. Suddenly a late 20's lady sat down next to me and as the bus set off, we introduced ourselves. She was a Kiwi travelling by herself and I suspect she needed a bit of conversation which tends to happen when you travel by yourself most of the time. We talked about what we had seen in Turkey until the greasy spoon interlude and she fell asleep for most of the rest of the journey back to Instanbul. Since we were both by ourselves, we arranged to meet for dinner the following evening near Sirkeci Station. There was a possibility that she might have a friend with her who she thought might have arrived in Istanbul that day. I turned up at 6 pm and the friend turned out to be a male back packer from Melbourne who was in his early twenties who she had met at a hostel in Antalya. We ate at a little outdoor restaurant in a lane by the station. The point of all of this story is that I ordered a beer.

Several minutes later, the waiter appeared with a copper mug and said 'your cappuccino, Sir'. We all protested that I had not ordered coffee. He pointed to the liquid and said 'taste'. The froth was hiding the cold beer underneath. His restaurant was not allowed to serve alcohol, but there were ways around that restriction. I enjoyed several more cappuccinos before heading off to my hotel at 8 pm since I had to be catch a shuttle to the airport the next morning at 3:30.

Her best story was about going to a Hamam by herself. She ordered the full treatment and duly did the sauna and got the washing, foaming and rubbing with the coarse mitt. If you remember my description of my Turkish Bath, after the mitt, you wrap a towel around yourself and sit around for quite a while to cool down and relax until it is time for your massage. Her attendants up until then had been female and she was horrified to see that the room she was to wait in was full of old Turkish men, all in their towels. She was a good looking young lady and I expect the men have been turning up every day since hoping that she might reappear. Poems and songs have probably been composed in her honour. A female eventually rescued her and gave her the massage.

It was fun to remember what it was like 40 years ago to be a back packer wandering about seeing new sights and meeting new people from all over the world. There may be better communications and more gadgets these days but young back packers are still the same. I wonder if in 40 years those two will remember a dinner with an old codger in Istanbul that was a lot of fun. Probably not, but I hope they will still be travelling in 2055.

Turkey was wonderful. I enjoyed it so much more than I expected and I hope to get back there sometime. However there are always new places to explore while I can. Now to decide where to go next year.