After haunting in Toowoomba we headed off south to Lismore. 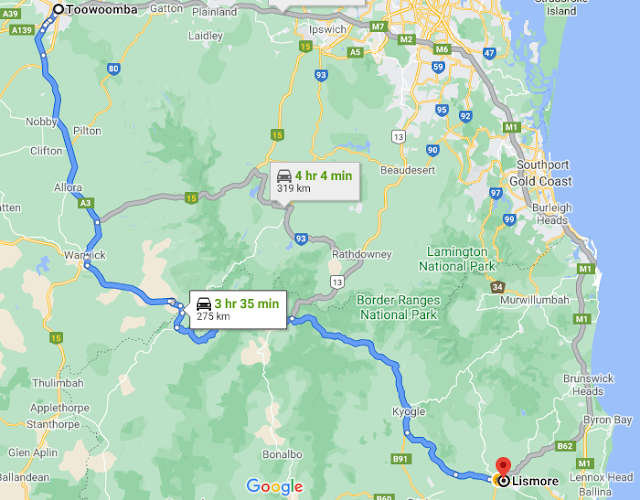 It sounds like an easy four-hour drive. Believe me, it's a tough few hours. 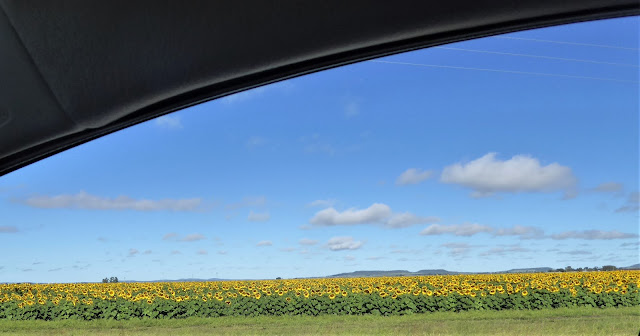 The Darling Downs has very rich black soil and farmers grow all sorts of crops. Here are some sunflowers. 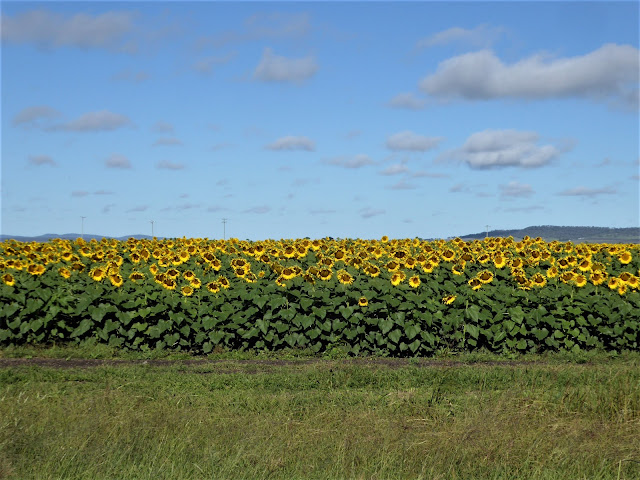 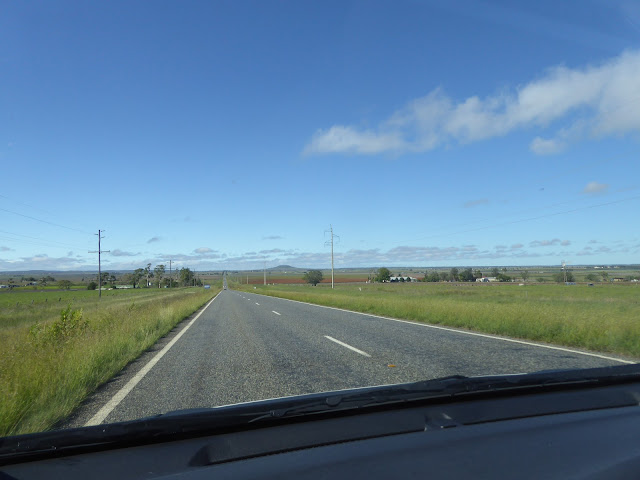 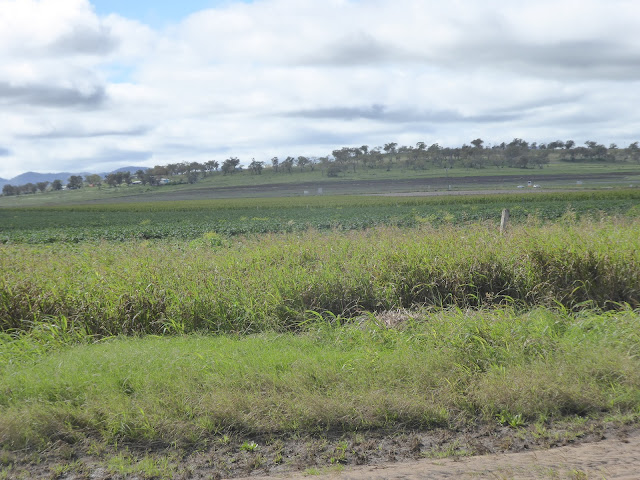 Many of the mountains have flat tops. 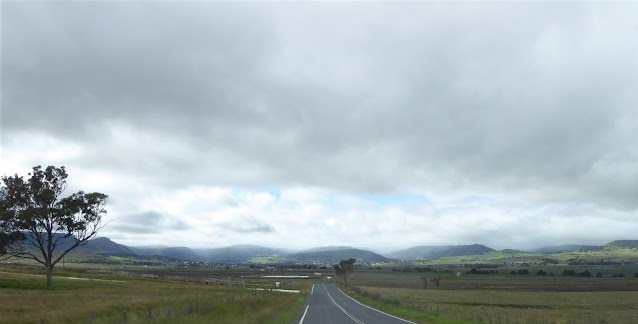 Clouds and rain appeared. This area suffered badly from drought over the past few years so the rain is needed badly. 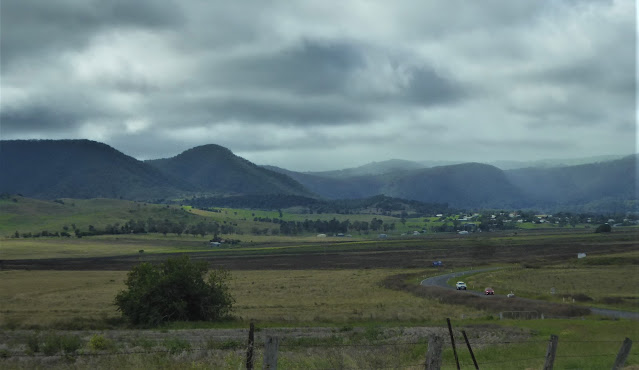 Like the Appalachian mountains in North America, those of Australia's Great Diving Range are very old and worn. 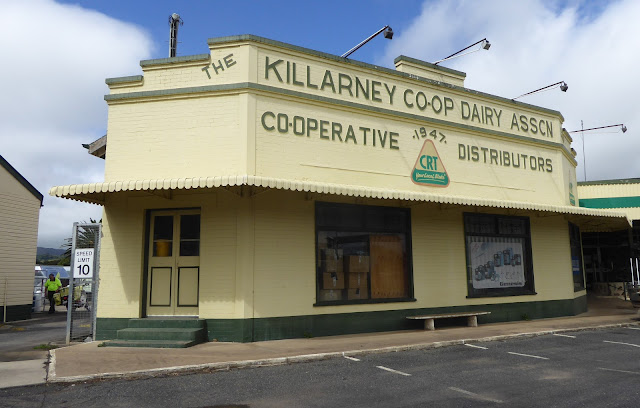 Killarney was hit by a tornado in 1968 and this was one of the few buildings in the town centre to survive. 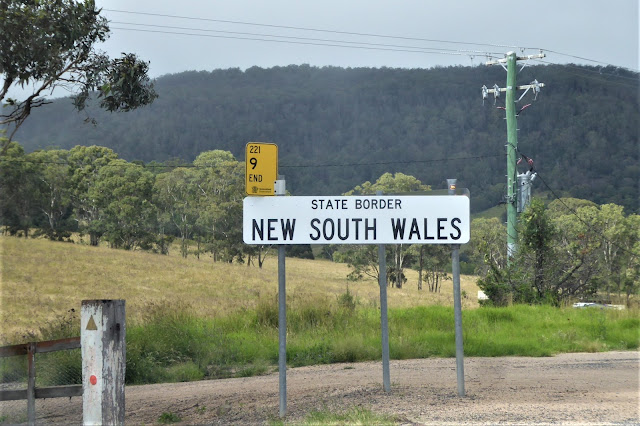 We entered New South Wales. This meant we could stop wearing masks. A few days before, the virus had escaped hotel quarantine and though the tracing system established very quickly that transmission into the general population had not occurred, the authorities decided that everybody should wear masks for the following two weeks. Virtually everyone complied. Since the virus started, Queensland has experienced 1502 cases with 6 deaths. 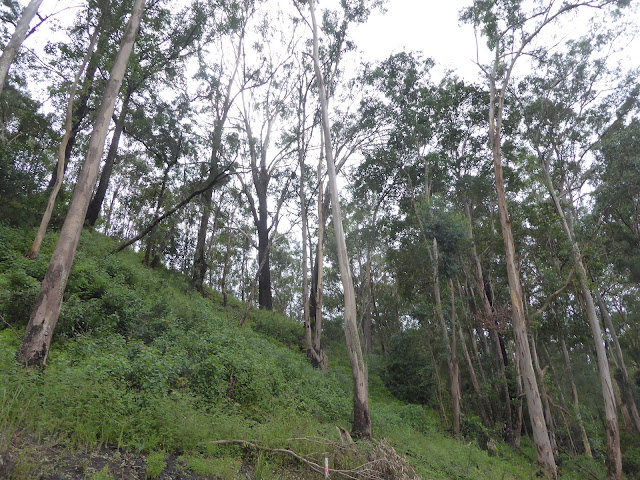 Immediately, we were driving through mountains covered with trees. The narrow roads were very poor. If the road was bitumen, there were numerous ferocious potholes. Otherwise, the road was gravel. It was great fun, but exhausting. 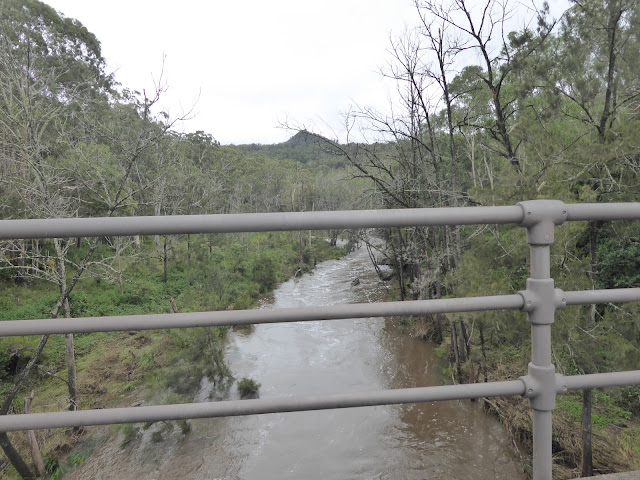 The creeks were full of water. A few days before, some of the roads would have been closed due to flooding. There are messages on TV warning people not to attempt to drive through water covering roads. 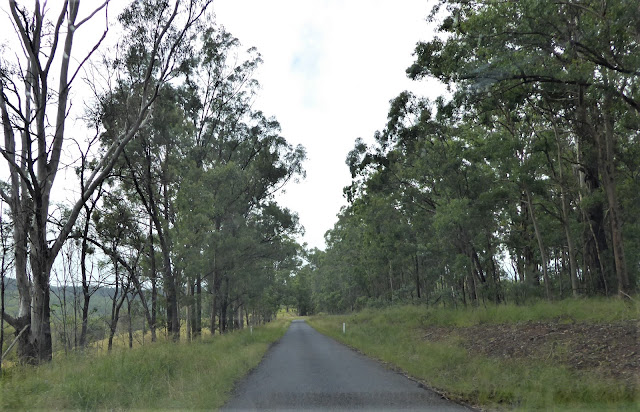 The road. It reminded me of narrow roads in the highlands of Scotland. 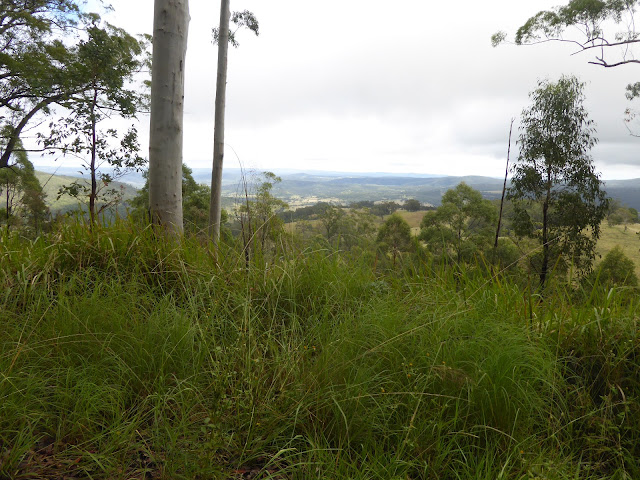 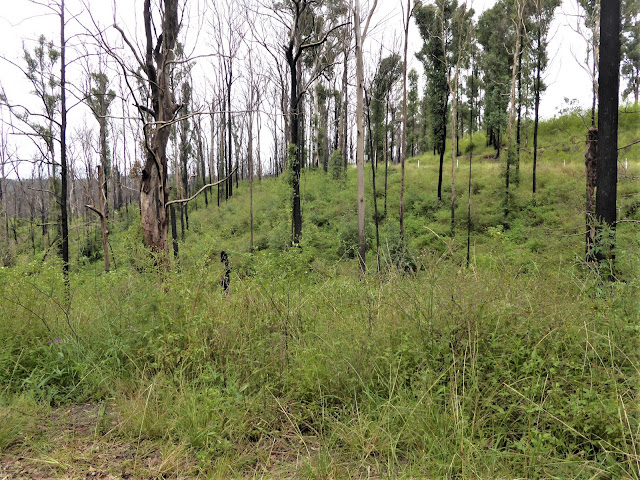 This area probably experienced a bushfire during the summer of 2019-2020. You can see the trees trying to regenerate by spouting leaves on their trunks. 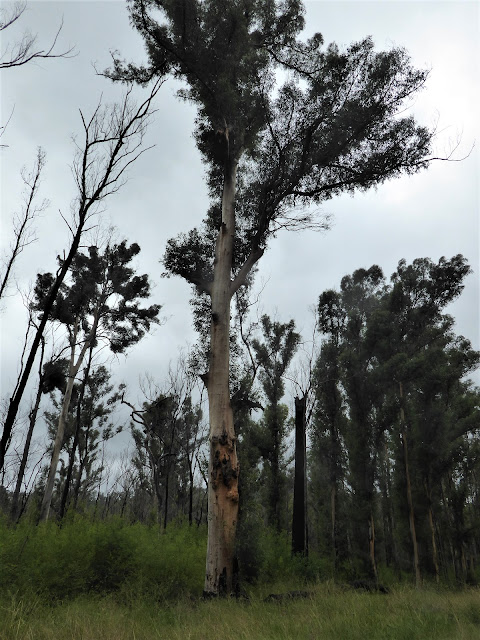 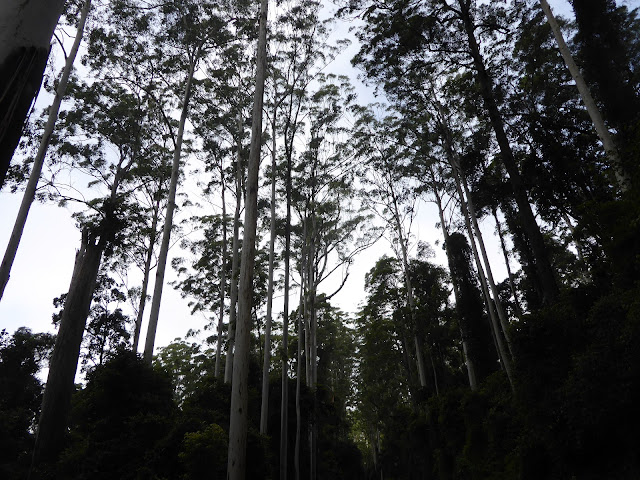 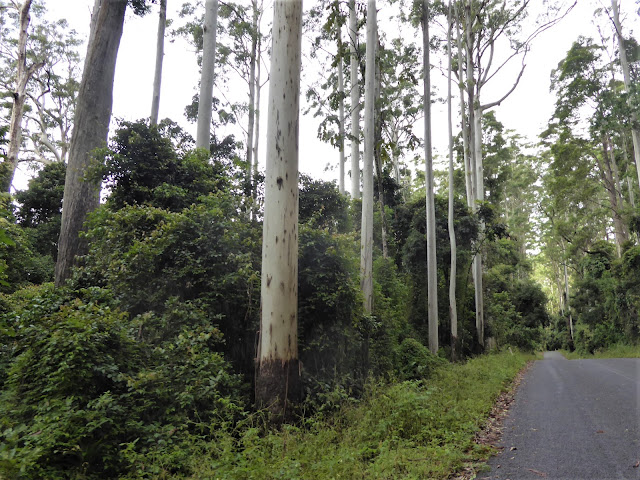 Such beautiful trunks. It's mostly rain forest in this area, and yes, it rained. 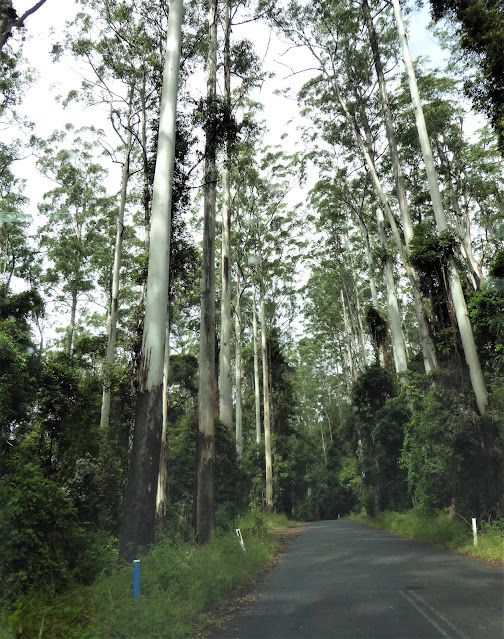 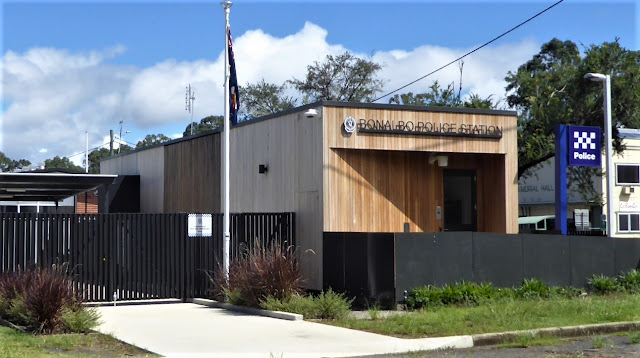 We stopped for lunch in Bonalbo and were intrigued by the Police Station. 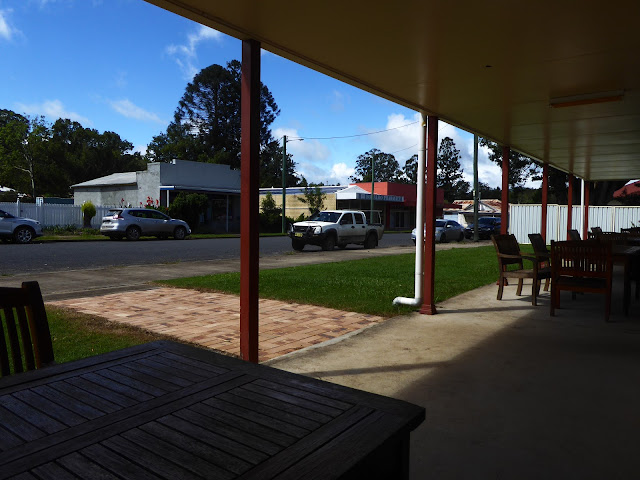 It's a small place of fewer than 400 people, but it does have a pub where we had lunch. We ate outside under the veranda roof.
The rest of the day's drive was comparatively easy, but I was quite tired when we reached Lismore. The multitude of sharp bends and dodging potholes made for a very tiring drive.