After the recent heavy rain, we decided to do a trip up to New Jersey to check out the house and see if the basement had flooded. Yes, there was water pouring in but the sump pump was working so there was no damage. However, as I drove around I could see flooding everywhere with a number of houses sitting in the middle of ponds. 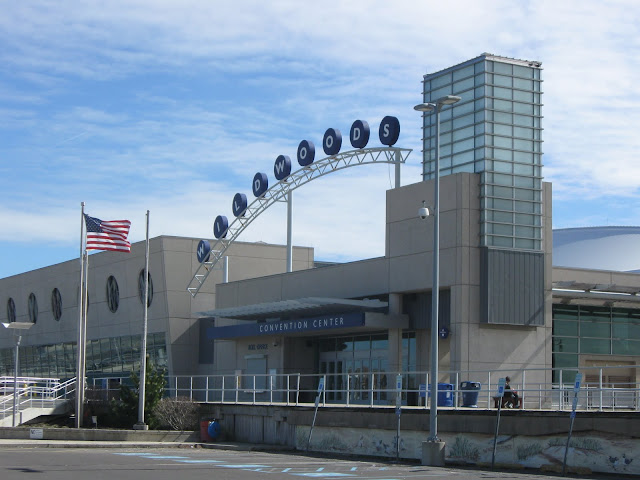 So I decided to continue my exploration of the New Jersey beaches and this time I went to the Boardwalk at Wildwood. At this time of year, there was plenty of spaces in the parking area outside the convention center. 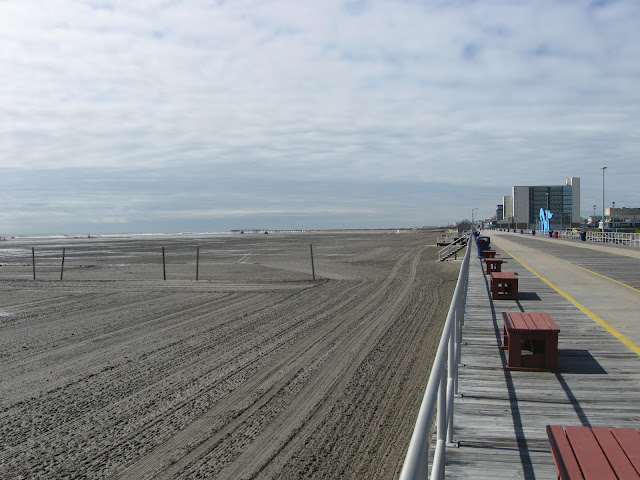 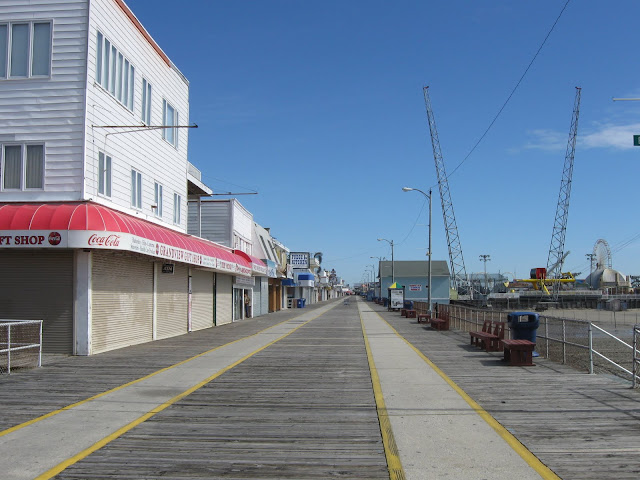 The view north towards where all the action would be in summer. As you can see, everything is boarded up for the winter, but there were the signs and sounds of the area coming to life and preparing for the crowds of summer. 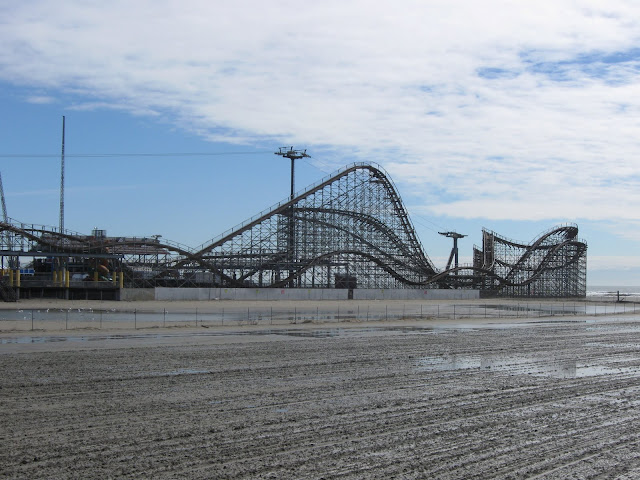 I had never been here before and was surprised to find three large pier areas. Unfortunately, the sand had a muddy appearance and looked revolting. It reminded me of a plowed field. 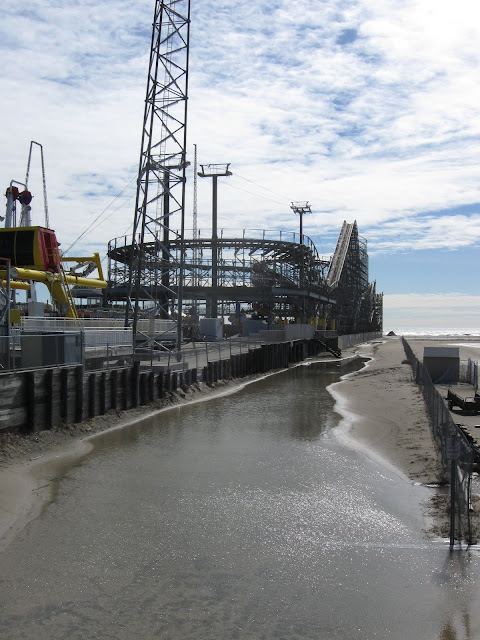 This was probably rain water. 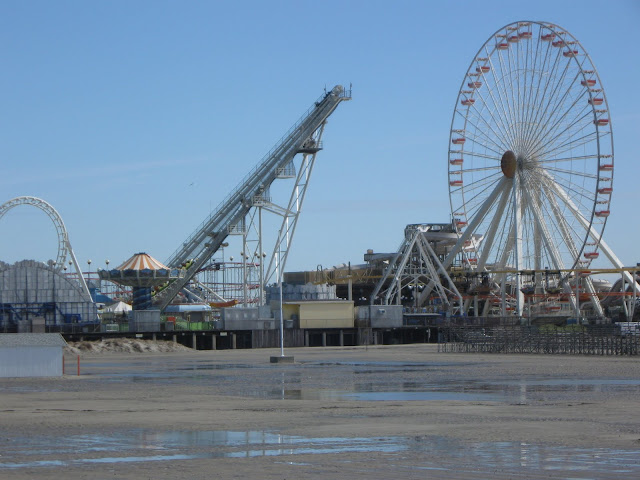 They were starting to test the rides and the roller coaster was whizzing around fast enough to remind me of why I never want to go on one of those things again. Ever. 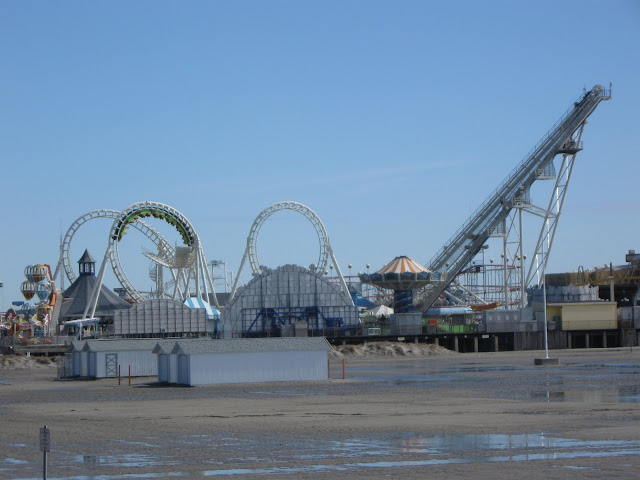 Here on the left, you can see the roller coaster cars upside down. 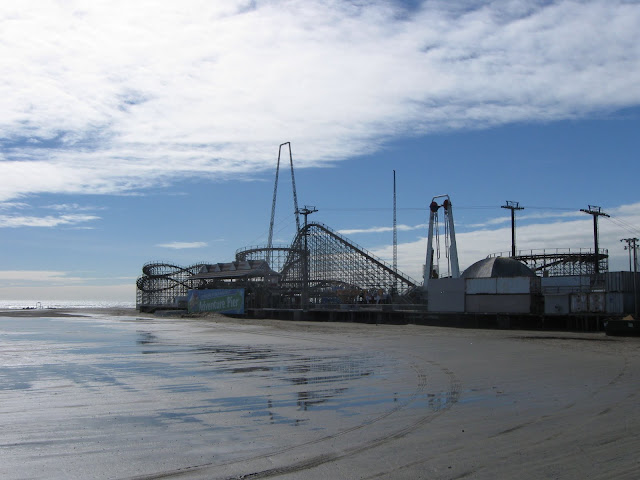 Another pier had the old fashioned kind of roller coaster. It looked scary enough. 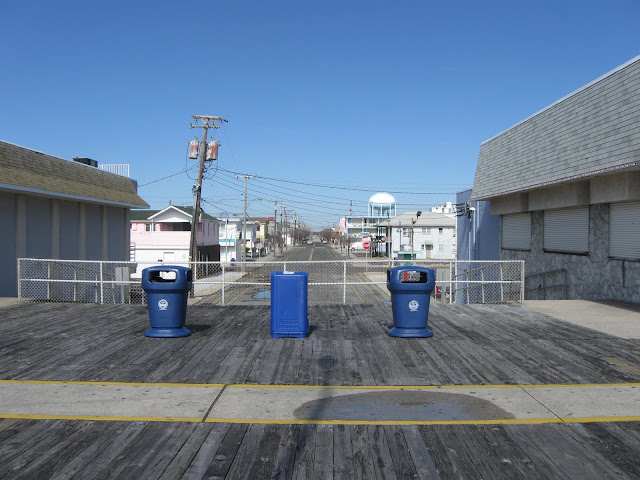 One of the back streets leading up to boardwalk. There were always three of these blue bins at each street. 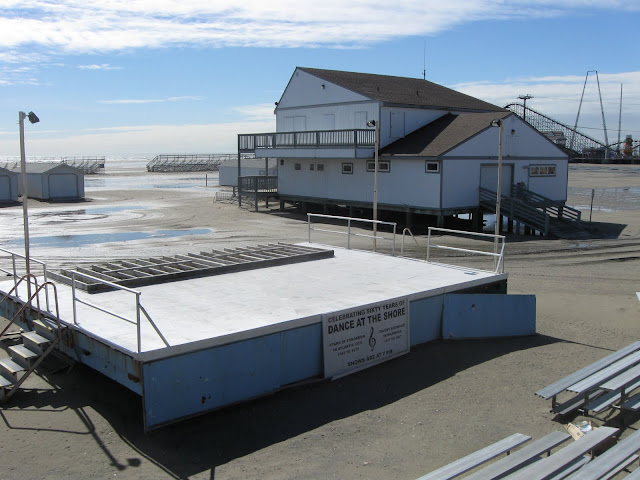 It must be a whole different world in summer. Here we have the dance platform and I must admit I have never heard of having a dance platform on the beach. 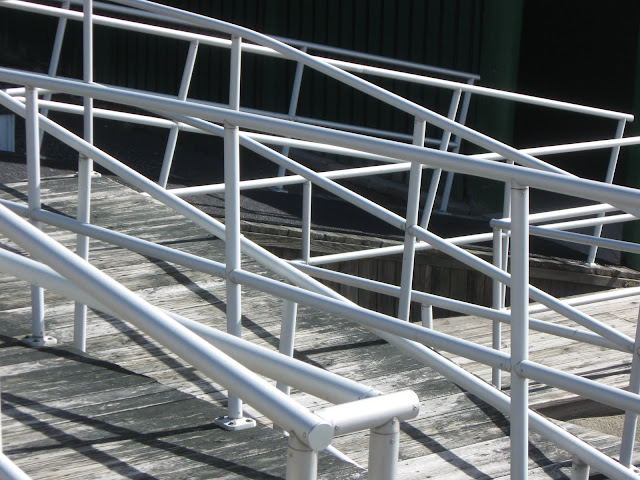 This mess of ramps led down to the bathrooms. 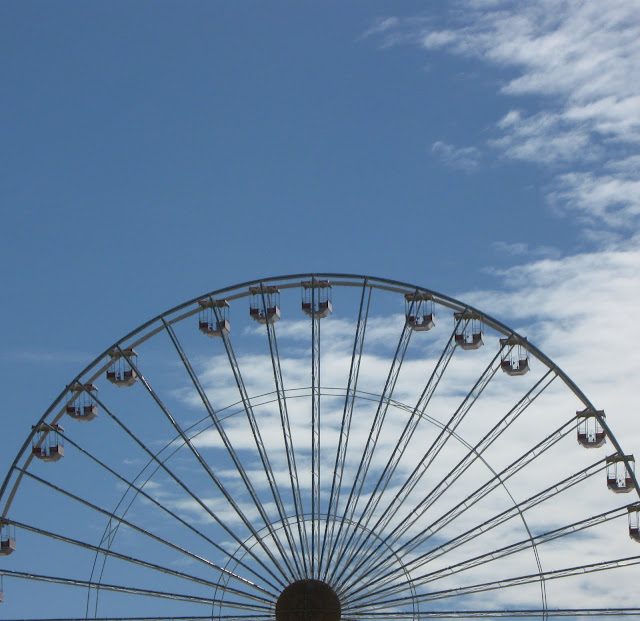 The Ferris Wheel. Yet another ride that scares the living daylights out of me. I am pretty well limited to the Merry Go Round and the Dodgems. 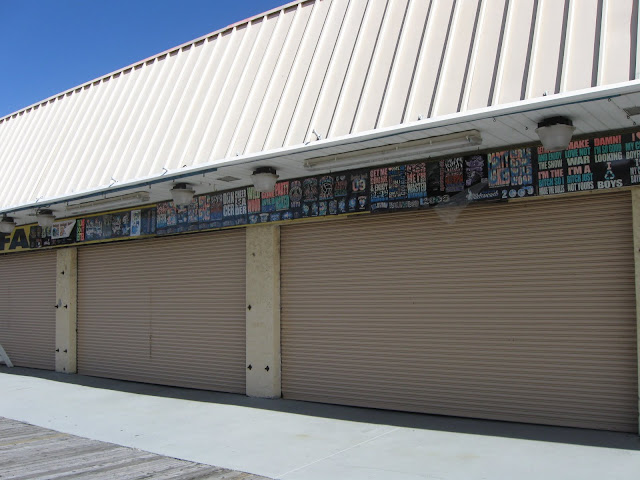 A boarded up set of shops. They look so inviting. 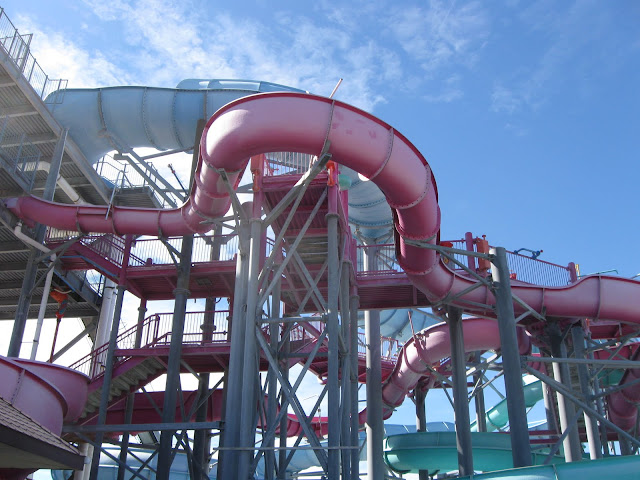 I wondered if I would enjoy a water slide. Probably not now, since I would have to walk around all day in a bathing suit which I suppose is a great idea when you are a kid. But then I am an old fuddy duddy now. 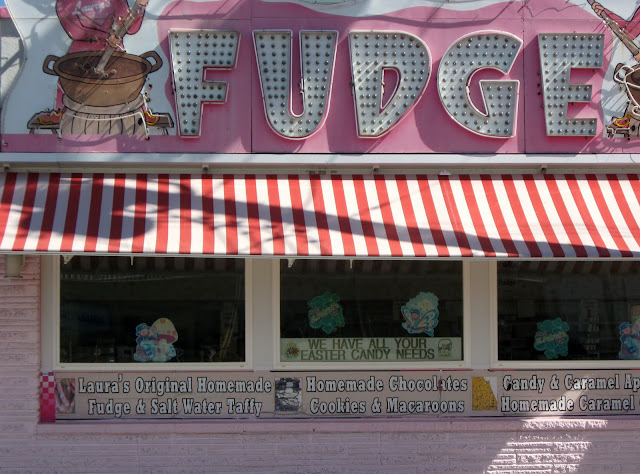 There were lots of places selling fudge and it seemed like there was one of these every few blocks. How much fudge do you need or can eat? Don't answer that. 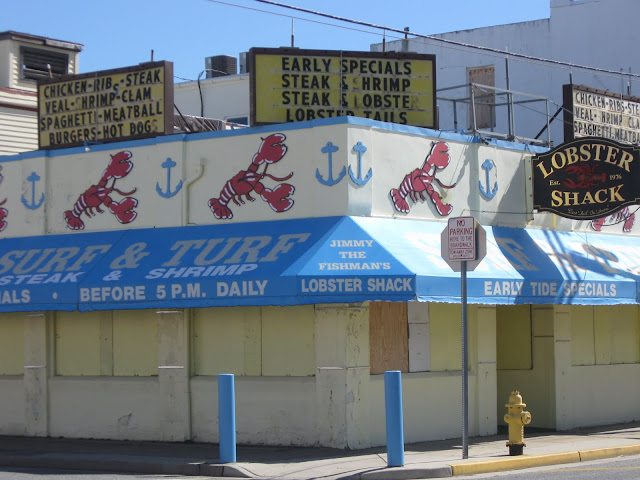 You could put this place down in Ocean City, MD and nobody would notice. Or care. 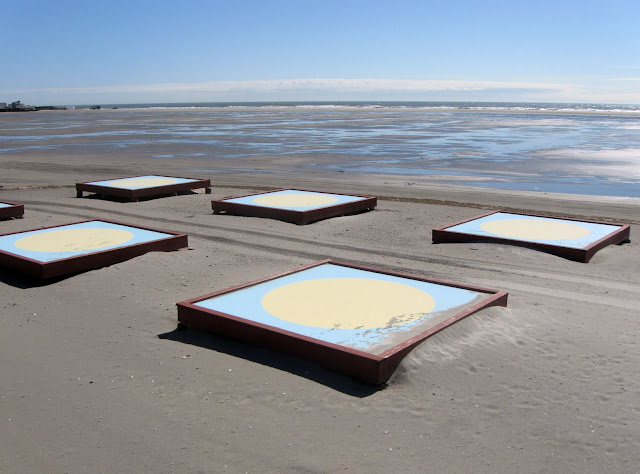 When I came across these, I wondered what on earth they were. Basically a square of some smooth surface with a circular ring painted on them. 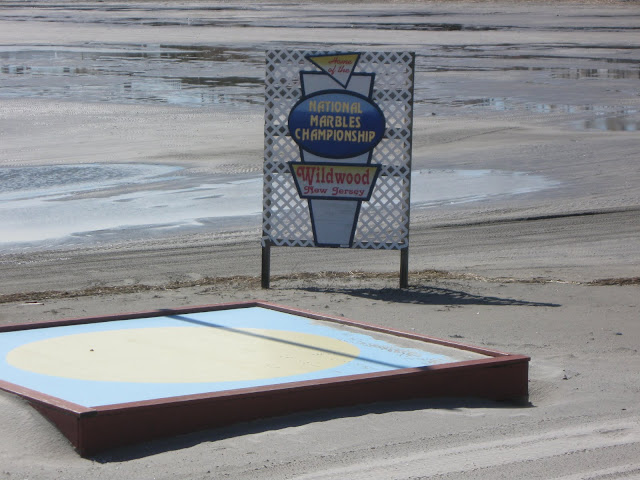 They turned out to be for playing marbles. It's a long time since I played marbles in primary school. The school yard was dirt and for one kind of game, we would make circles about twenty yards in diameter and it was a war of attrition to get your opponent's marble out of the ring. 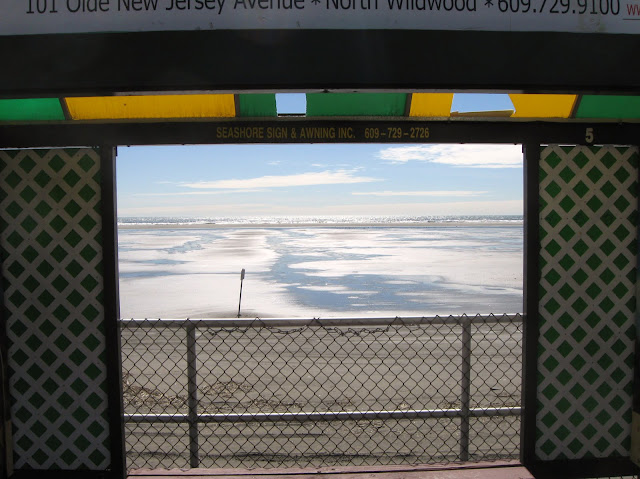 These little shelters were scattered along the way and all were damaged. 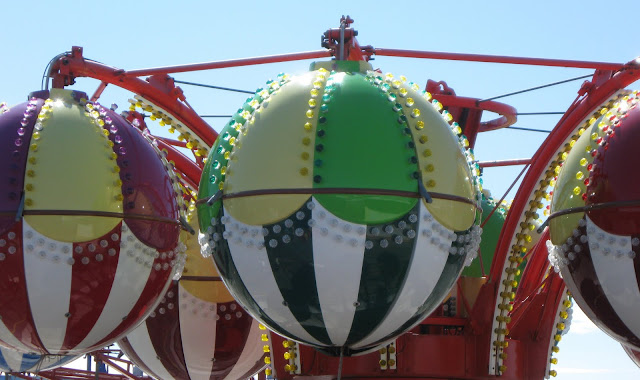 I presume these balls open up somehow and you ride inside them. 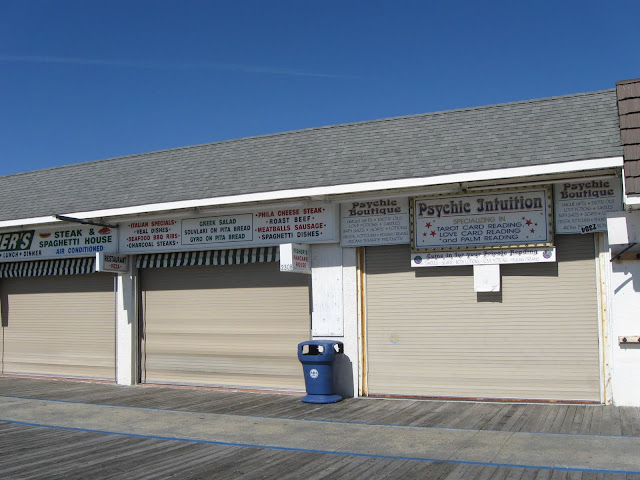 Another sample of the potential delights of summer to be found here. Get your fortune told to see if you will survive the food you buy next door. 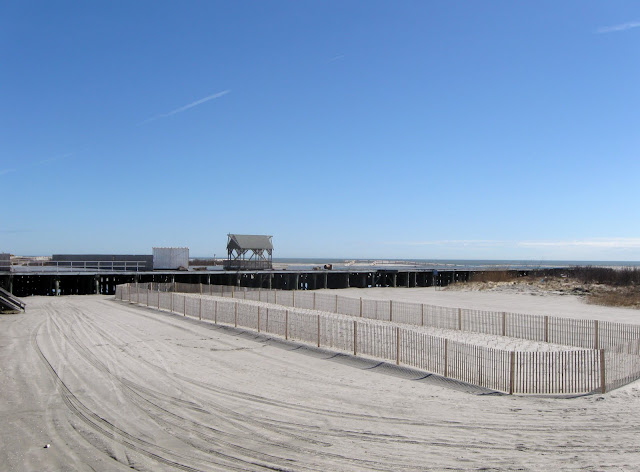 The amusements and shops ended and then it was back to the beach just being a beach.

Where upon you could go back to your abode for a good lie down. The amusement section was approximately 1.5 miles long so if you walked down and back the whole way, you got a reasonable amount of exercise.

To quote W. C. Fields, "On the whole, I'd rather be in Philadelphia". Or even Ocean City, MD.