So we are off on the first of the major trips of my retirement. Marianne is attending a scrap booking event near Durham, NC and to get there we decided to go via Kitty Hawk to see the site of the Wright brothers first flight. 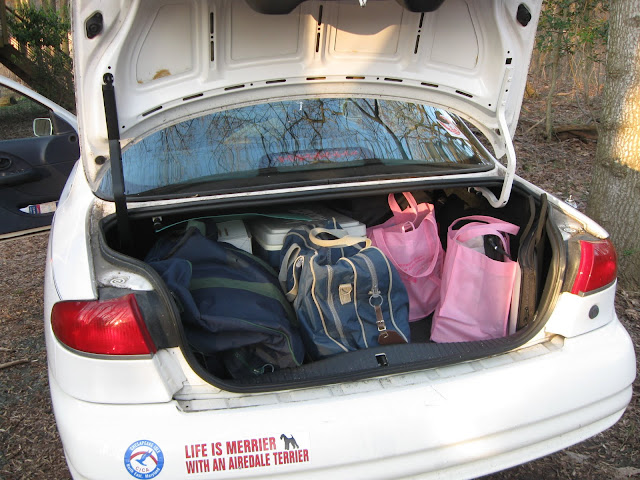 Of course, scrapping requires a boot / trunk load of stuff to be drug along. 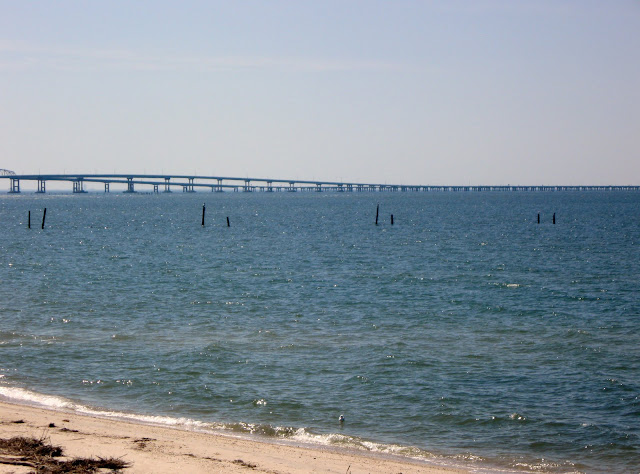 We went down the eastern shore and over the bridge tunnel structure at the entrance to the Chesapeake Bay. To be honest, the prettiest part of the journey was going down Rte 213 in Cecil County which incidently is mentioned in a book I recently borrowed from the libary about the top 100 scenic drives in the USA. The drive along Rte 13 in the part of Virginia north of the bridge / tunnel is not quite as depressing as it was years ago, but the signs of poverty were still abundant. 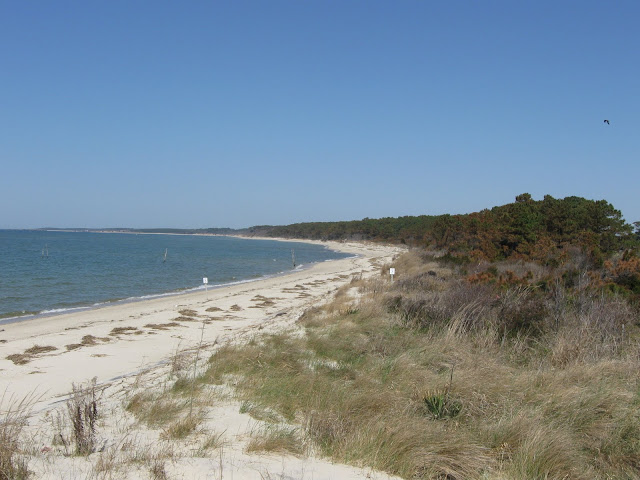 A beach on the bay side at the northern end of the bridge / tunnel. If you continue 200 miles further north along the bay, you come to our house. The bay is tidal and when it is high tide at the mouth it is also high tide up at the other end where we live. 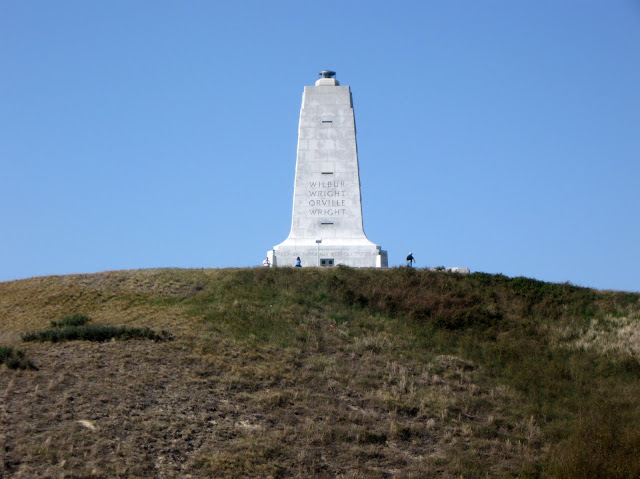 The monument to the Wright Brothers at Kill Devil Hills. 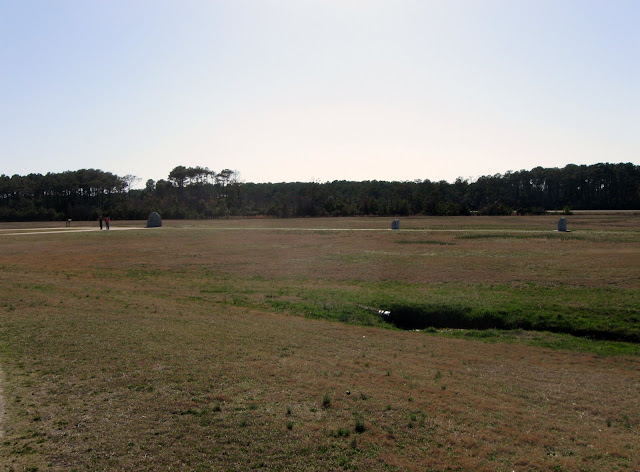 This is the actual site of the first flight with the large boulder on the left marking the point of takeoff and the rock to it's right the point of landing. The rock furthest to the right marks the point of landing for the second flight. At the time, the area was just sand. Now there is a covering of grass which apparently is infested with prickly pear. 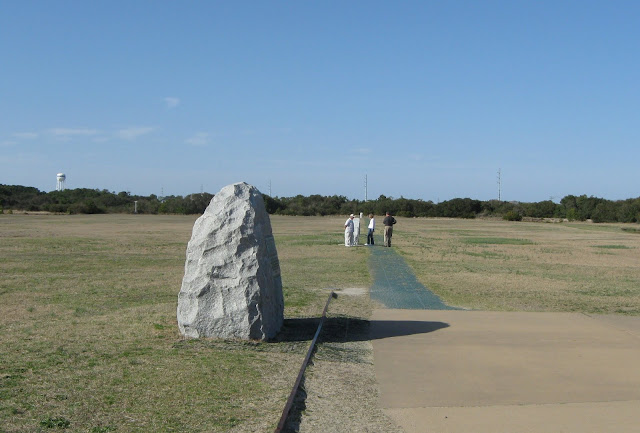 The plane ran along a rail on a dolly to build up speed. Here is the point of takeoff, heading north. 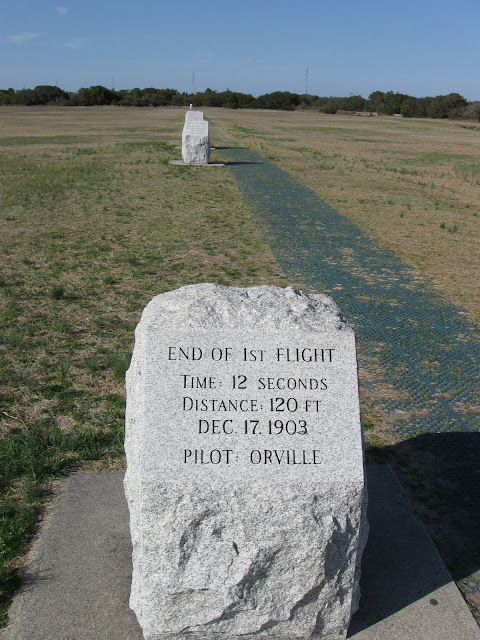 The point of landing. There was a headwind of approximately 25 mph which was needed to develop the lift for the plane. The ground speed was effectively only 6 to 7 miles per hour. 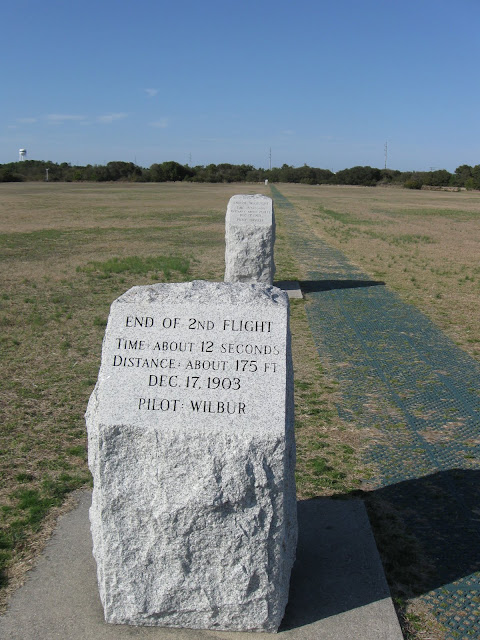 The marker for the end of the second flight. 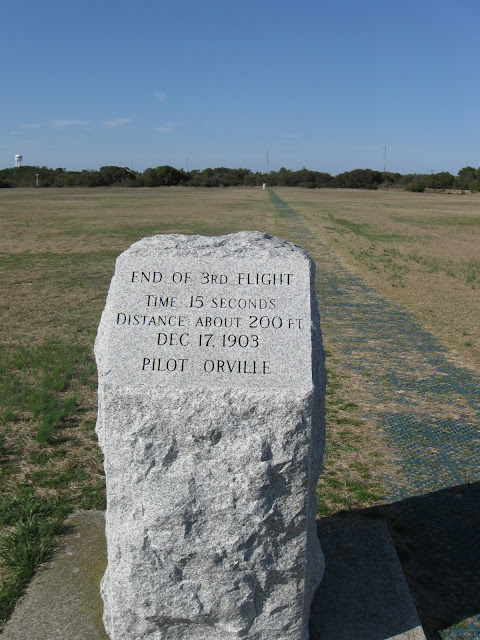 Off in the distance, you can see the marker for the 4th flight. 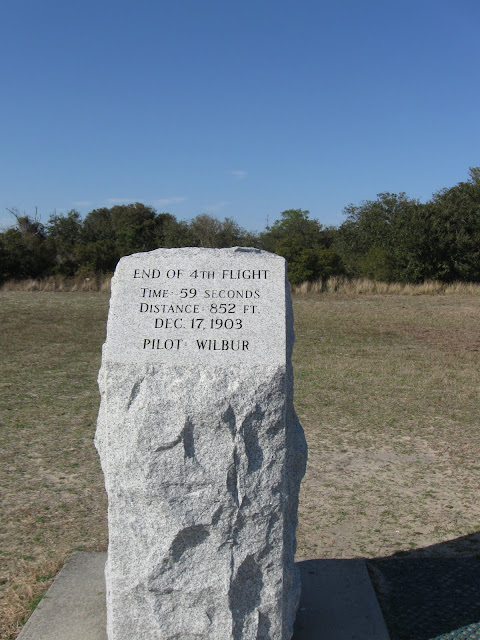 Finally, the marker for the end of the fourth flight. It shows that practice does make perfect. 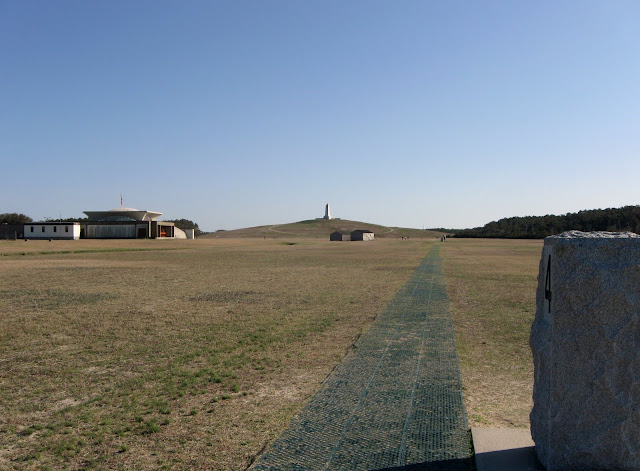 Looking back from the fourth marker towards the hill which the brothers used for their glider experiments. A key element that needed to be satisfied for powered flight was that the elevation above sea level for both take off and landing needed to be the same. That is why the powered flights took place on the flat. I had always presumed from the photos of the event that it took place on the beach at Kitty Hawk and this is not so. Kill Devil Hills lie a few miles south of Kitty Hawk and the actual flight path is close to half a mile inland. 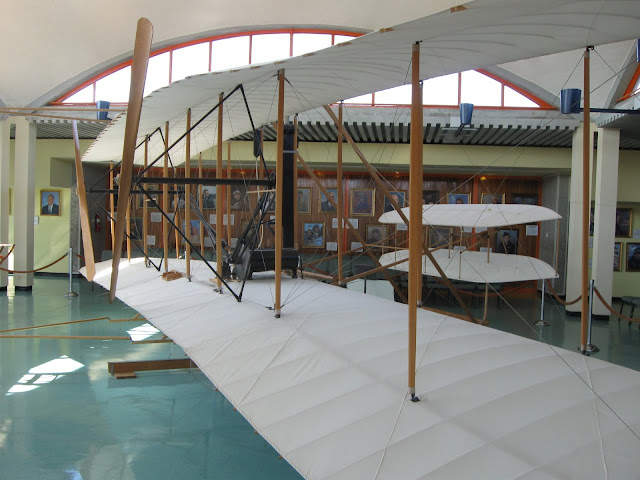 There is a museum with a replica of the plane inside. We arrived in time for a twenty minute lecture on the flights by a park ranger that was quite informative. He demonstrated the method of wing warping for roll by yanking heavily on one of the stuts at the wind tip. We thought on arrival that we would be the only audience and then about two hundred school kids walked in. 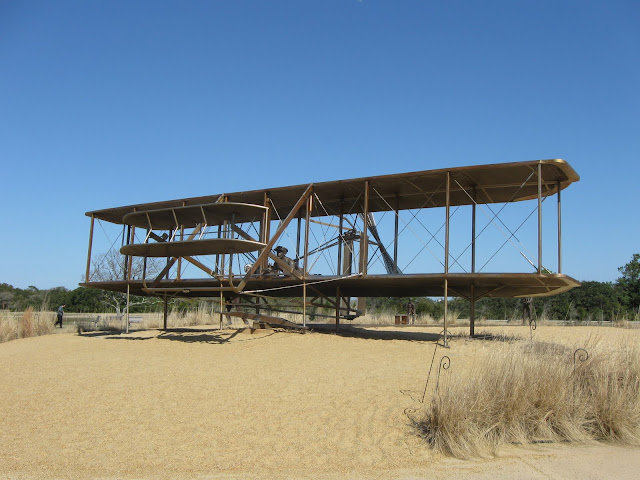 On the far side of the hill from the actual flight is another replica which appears to be made of brass. It is supposed to recreate the moment when the plane took off with statues of the men who were there, including the photographer (John Daniels) who took the photo just after the plane took off. 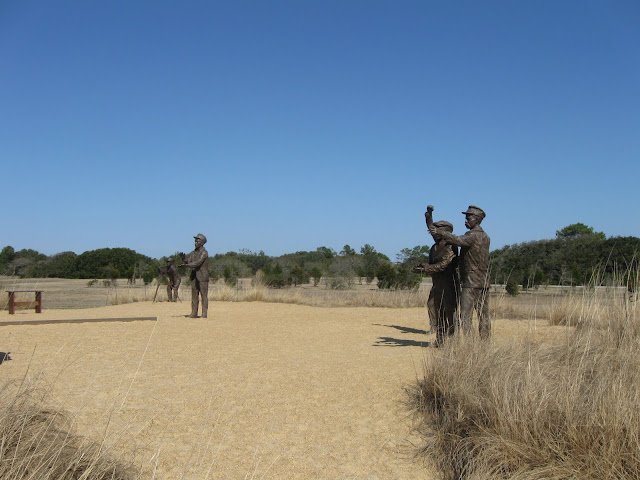 At least this area shows sand rather than grass. 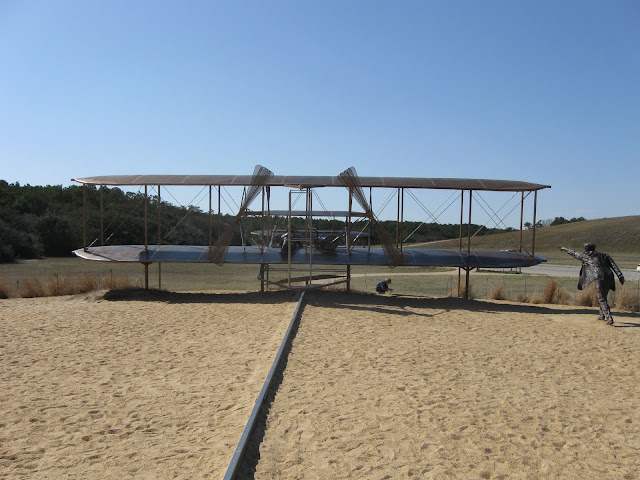 The rail and Wilber on the right just after letting go of the wing. 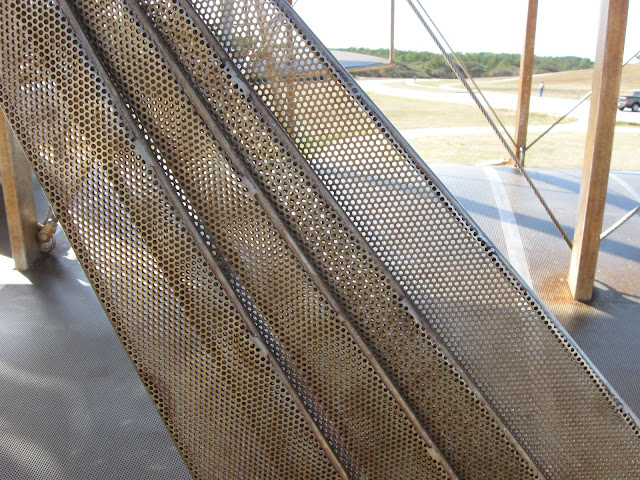 The detail of the propeller. The whole surface of the plane is made of perforated metal. 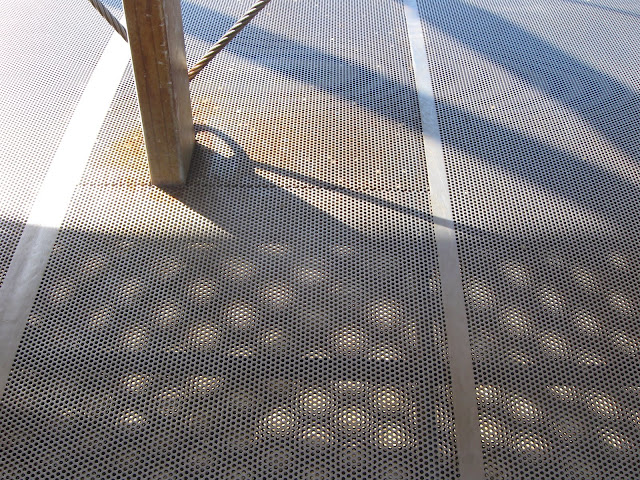 The wing, again in perforated metal. It is absolutely beautiful. 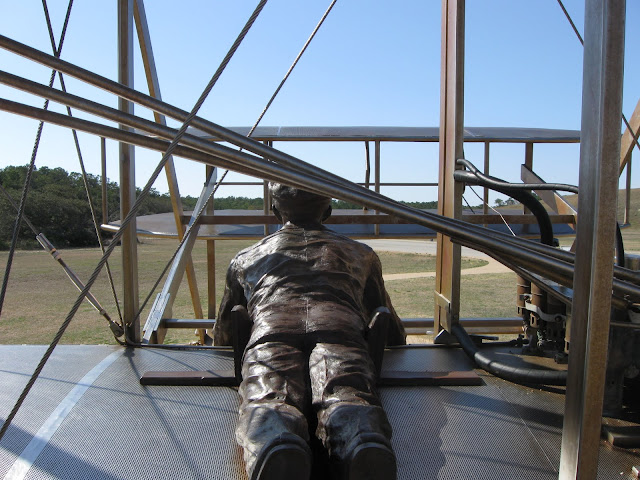 The view from the flying position. If you ever come to see this area, make sure you take a look at this replica made of metal. 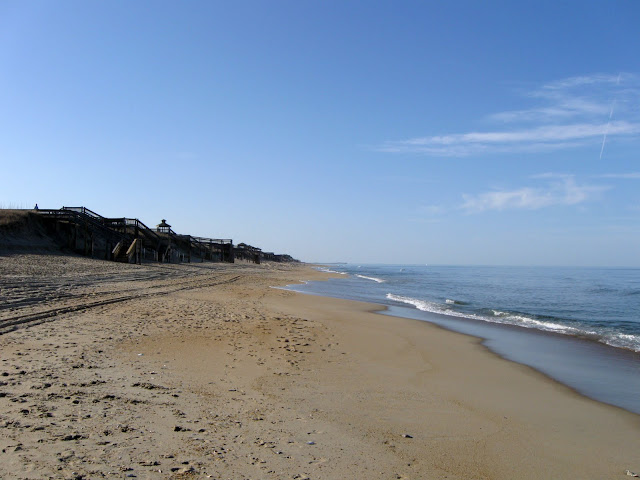 So down to the actual beach itself and it easy to see that that the only thing you could fly here would be a kite. For some reason or other, wheeled vehicles are allowed on the sand and the tyre tracks make the beach look very ugy. 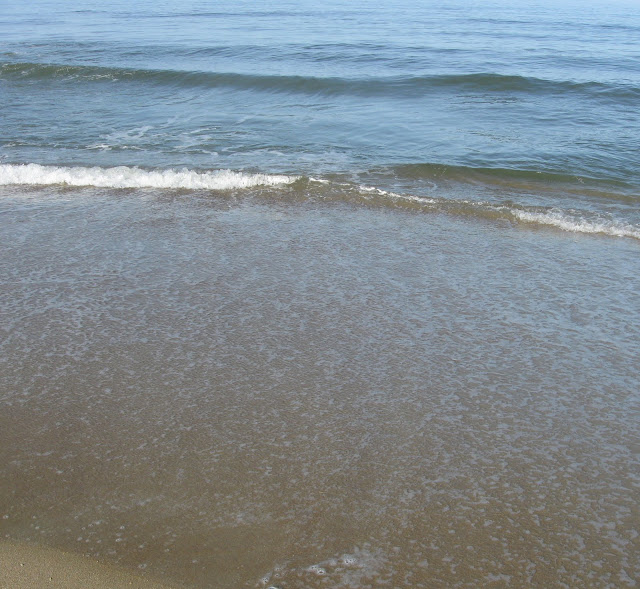 The water itself is a vast improvement on the sea further north in Maryland or New Jersey. It is reasonably clear but still not as clear as the water at Aussie beaches. You could consider immersing yourself in this water without a shudder at the thought of its cleanliness. 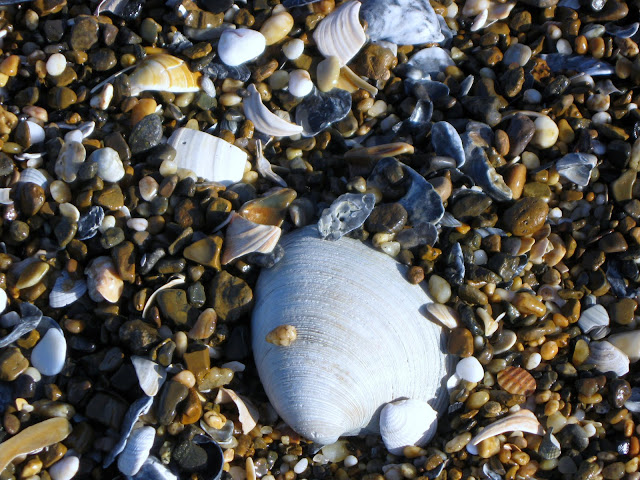 The sand is more gritty than further north and there are areas densely covered by shells. 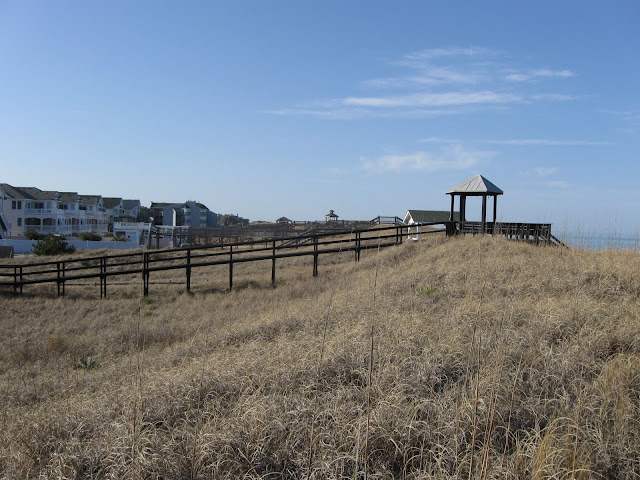 Large sand barriers have been built to protect the nearby houses from the sea. Oddly enough, they have allowed the owners of those houses to build private platforms on the top of the dunes with a private jetty going back to the house. 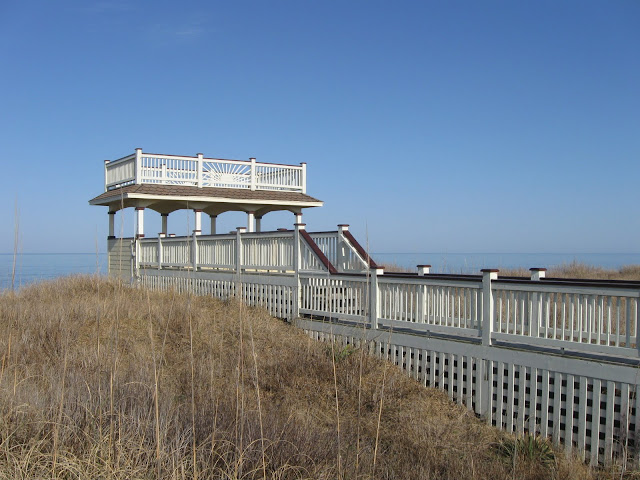 Some are more elaborate than others. 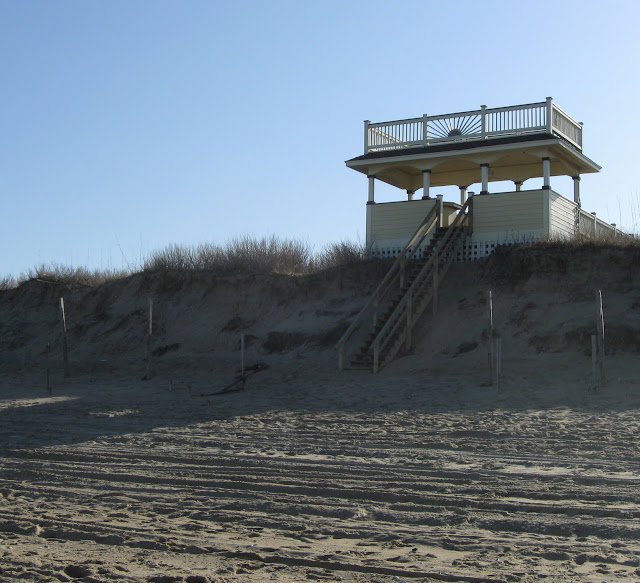 As an Aussie, I find these private intrusions onto a public beach quite offensive. 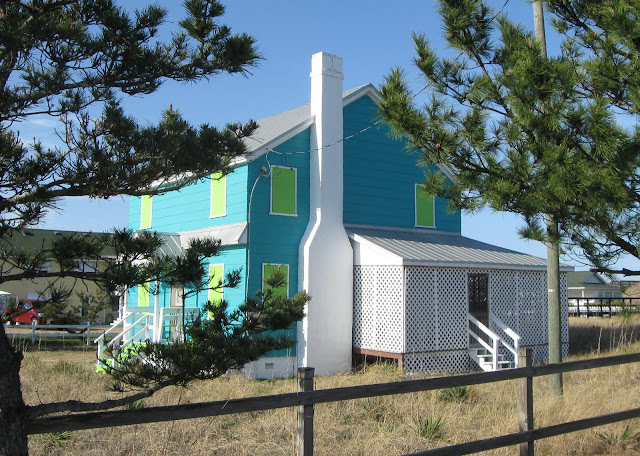 One of the local beach houses. After doing the boardwalks at Sea Isle City and Ocean City, we were surprised by the large number of older buildings and holiday houses that had not been torn down and replaced by larger versions. It really is a pleasant area to visit. 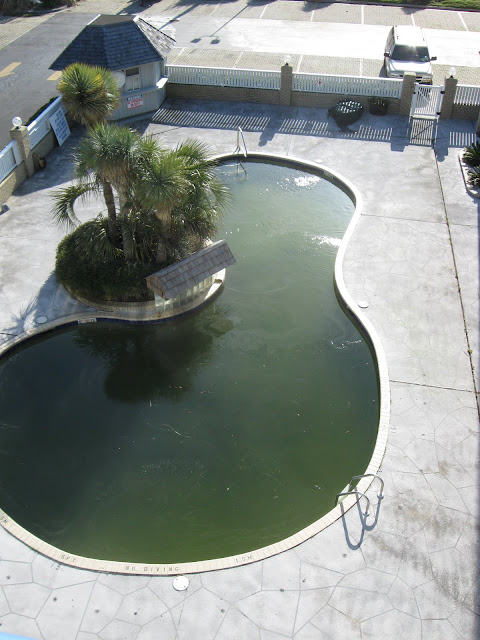 Finally, the pool at the motel which we stayed at. The motel itself was fine with a very friendly welcome, but the pool had a layer of oily scum floating on top which made me glad it was still only early spring.
Posted by Ray Perry at 6:00 AM