It was a beautiful sunny afternoon so we decided to do a walk along the Boardwalk in Ocean City, NJ. This sea side town is unusual in that it is dry with no booze and it has a quite different feel to it from Wildwood or even Sea Isle City. 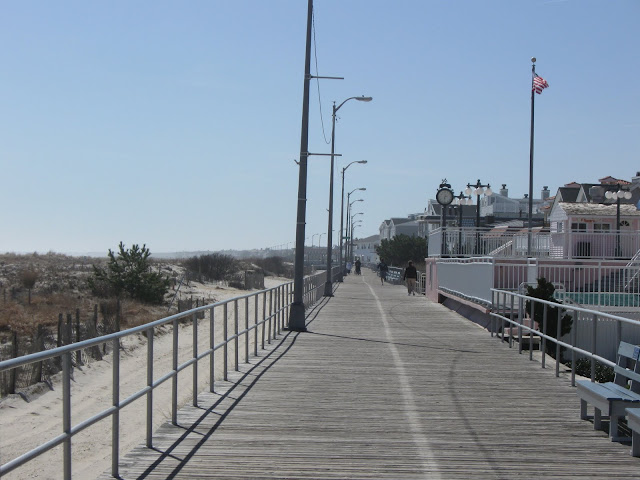 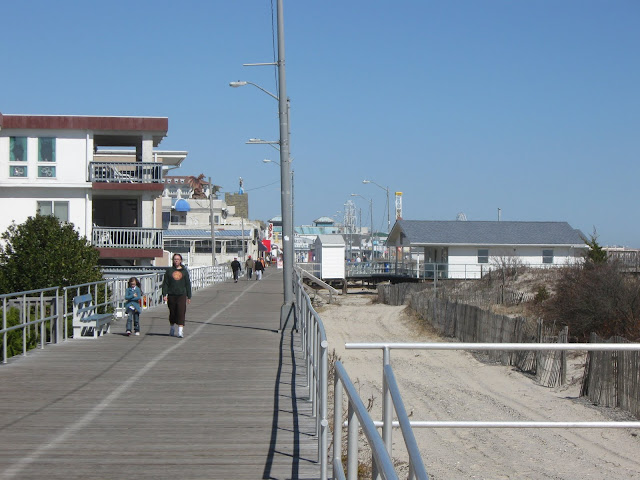 The view north. The boardwalk is narrow at this stage (15th street) but soon widens. It was such a nice afternoon there were lots of people out walking, running or bike riding. Quite a change from the previous day in Wildwood where most of the people were working on fixing things or getting their place in readiness for the summer. 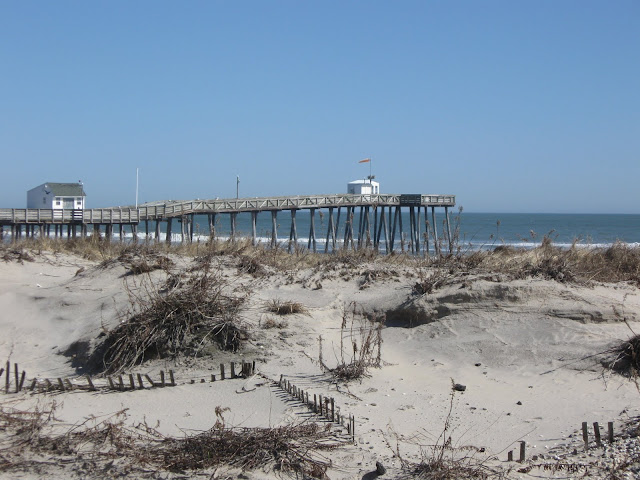 The fisherman's pier. It has a somewhat rickety look to it that makes you think it will fall down at any moment. 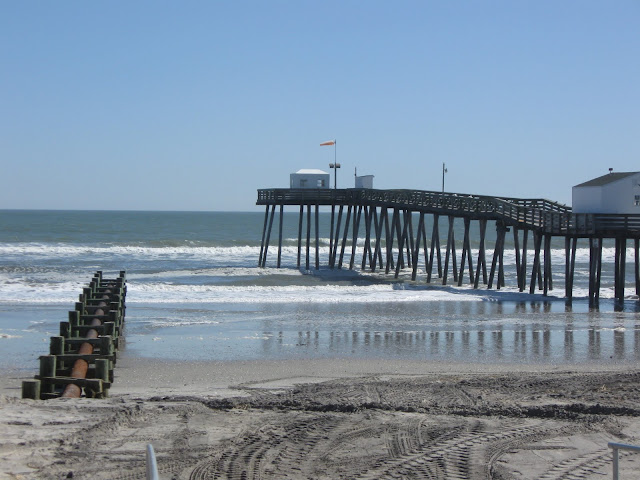 Another view of the fisherman's pier and the drainage pipe that seems to be there to dump street water into the ocean. There is one of these for each street as you go north and they sure are ugly. I don't know if they are still in use and I suspect they are. 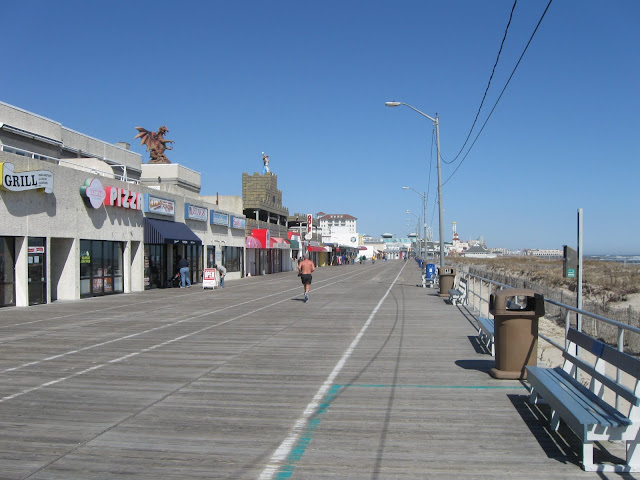 The boardwalk widens and they have lanes for pedestrians and for wheeled vehicles. The shops looked much more prosperous than those at Wildwood and quite a few were already open and doing business. 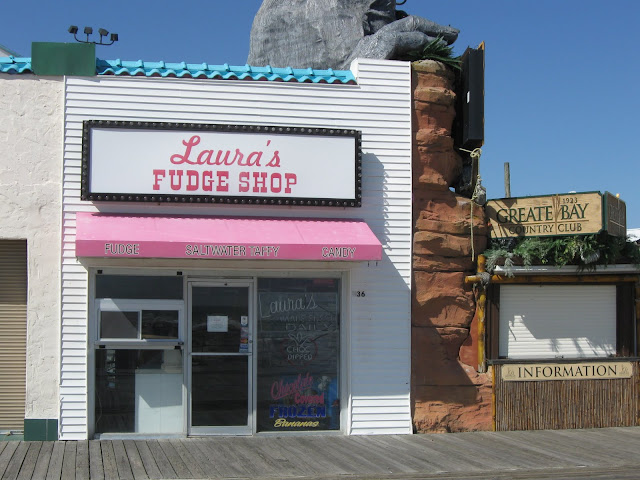 Yet another of these fudge shops. 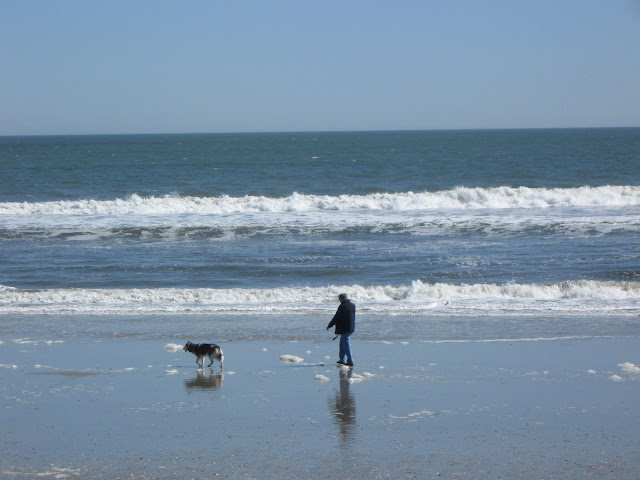 At this time of year, there weren't too many people actually on the beach. The proximity of the water was quite noticable compared to Wildwood where the ocean seemed so far away. 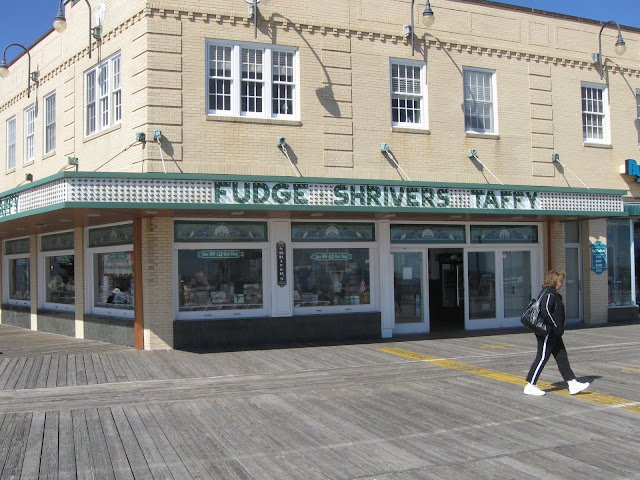 Yet another fudge place but a different brand. Apparently, my wife and daughter would patronize this establishment when they would go to Ocean City. Because Sea Isle City was so small, Marianne went to the Ocean City High School. The old buildings were replaced in 2004 / 2005 with only a small piece of facade left. Still, Marianne still likes OC and it does have it's attractions, even away from the boardwalk. The main street is lined with shops with very few of them empty. 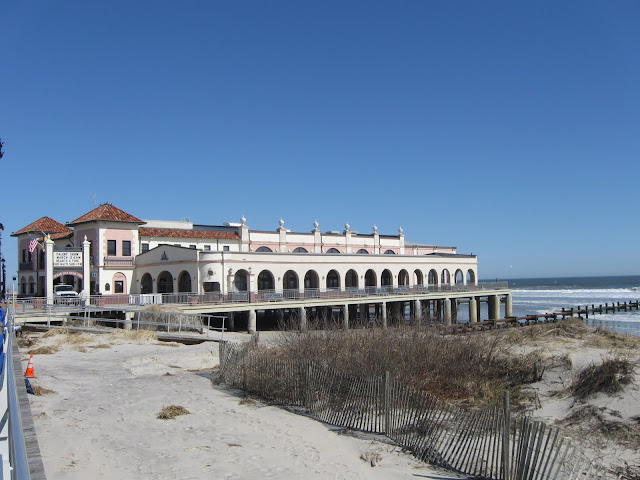 The Music Pier is quite an elegant building. Unfortunately it was closed so I couldn't take a look inside. I love to look at these older halls. 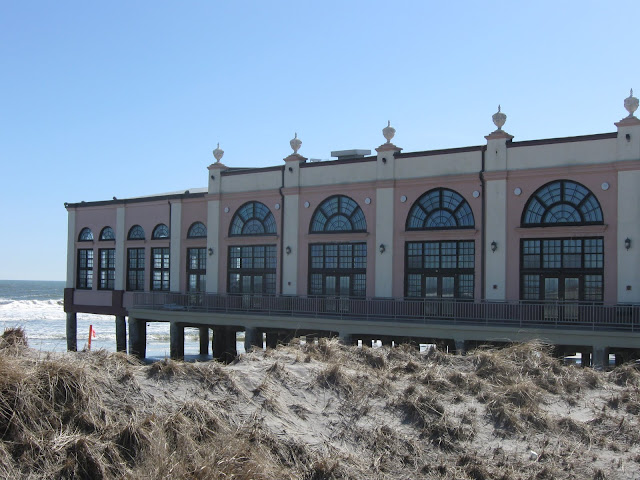 Another view of the Music Pier. 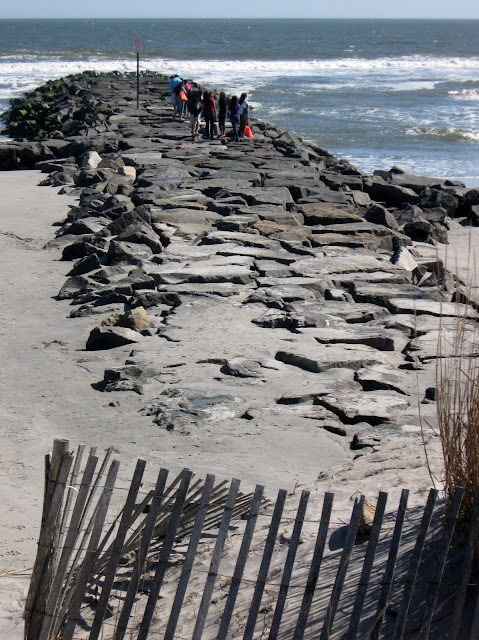 There was a group of young people out on this groin and half an hour later when we walked back, they were still there. I have no idea what the attraction was. 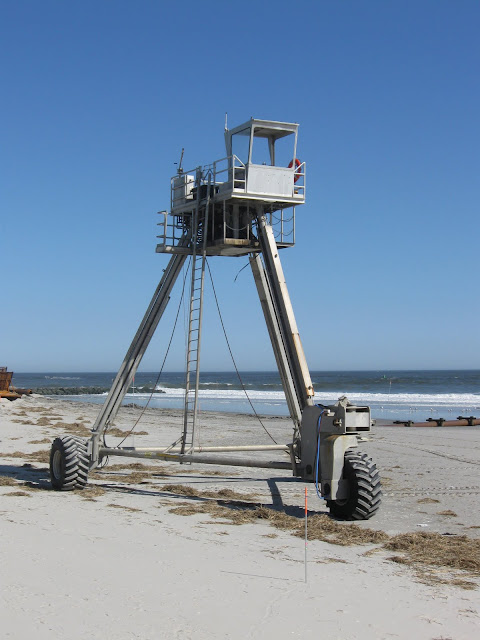 We wondered what this contraption was supposed to be for. Perhaps it was a movable platform for the life savers, or then it could have been a movable gibbet to discourage poor behaviour on the beach. 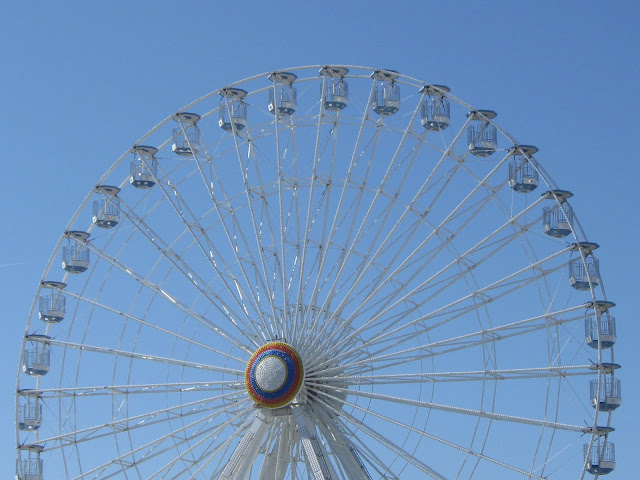 Being a seaside place, there were a few amusement areas, but nowhere near as much as at Wildwood. So of course, I had to take a photo of the Ferris Wheel. 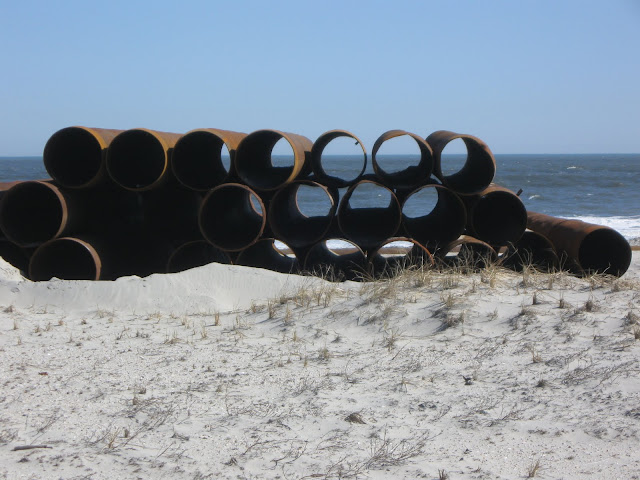 The boardwalk narrows again after a mile and in this area they are pumping extra sand onto the beach. These are some of the pipes that they will eventually use. 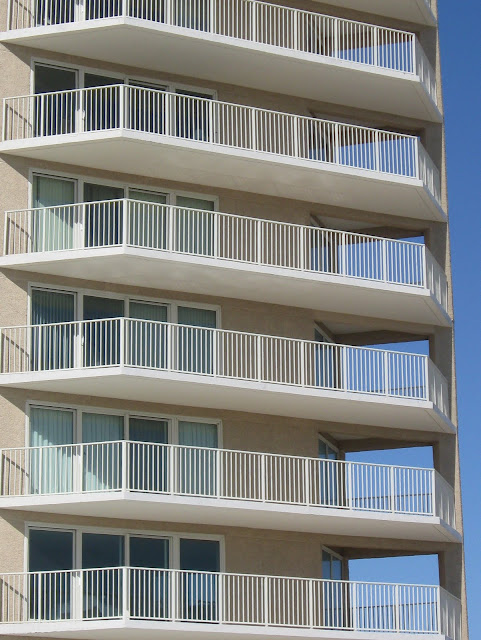 Some town planner allowed this monstrosity to be built at the northern end of the wide part of the boardwalk. No doubt, the view is great if you have one of appartments in the building, but it ruined the view and no doubt the breezes for the older residences in the area. This might be ok in Miami or Surfers Paradise, but not in this location. 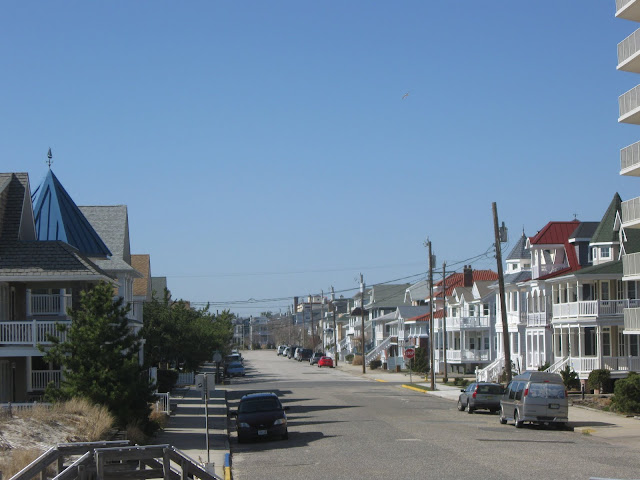 Unlike so many other seaside towns, Ocean City has managed to keep many of the grand old houses that were so interesting to look at. In Sea Isle City, many of them have been torn down. On the right of the picture, you can see the edge of the interloper from the previous photo. 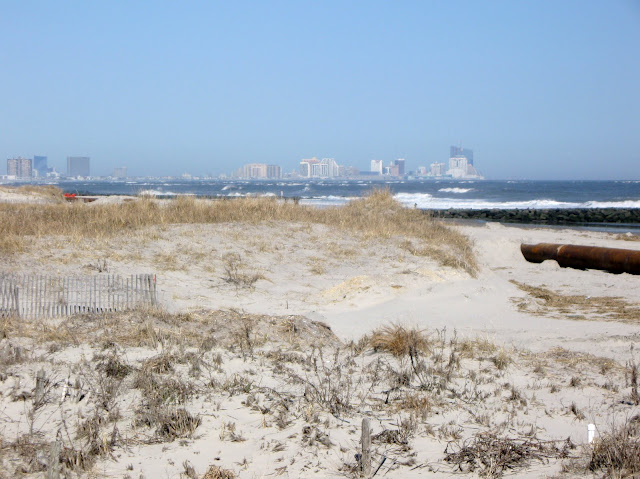 Off in the distance, Atlantic City. 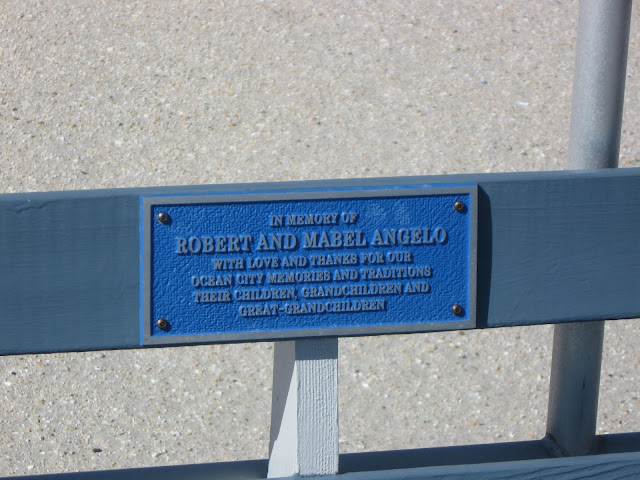 Finally, all along the boardwalk are benches with these little signs. It's interesting to read them and you get a sense of how important these seaside vacations were to the families who would go down there year after year. Sea Isle City has similar plaques and no doubt all the boardwalks have them now. It's a great way to fund the benches. In case you don't know, you can click on each image to get a larger version of the picture.

I really enjoyed this boardwalk and would happily do it again, perhaps even in summer when it was crowded. Thoroughly recommended.