For the non Americans reading this blog, OBX stands for Outer Banks. Before heading over to the Durham area, we decided to drive down to Cape Hatteras. So just south of Nags Head, you continue down a very narrow barrier island which is one of the Outer Banks. 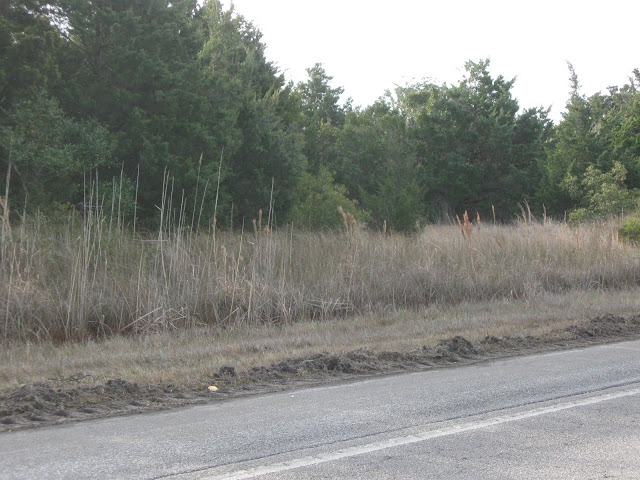 Unfortunately, for quite a while you can't see too much from your car because of the low scrub on either side of the road. It's there to help prevent the sand being washed away by surf or wind. 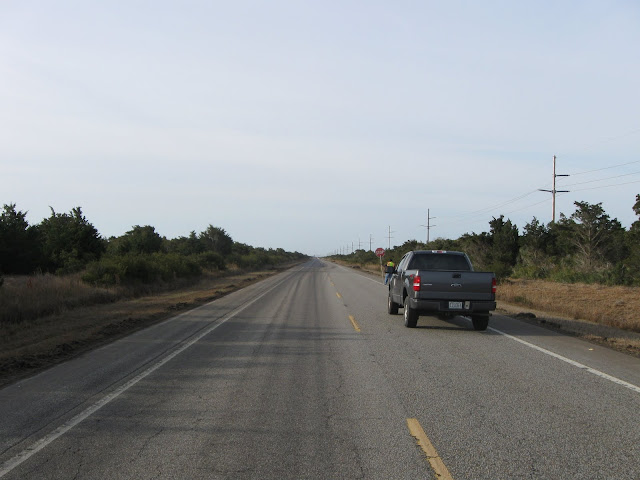 The road is mostly straight with very little traffic. The guides warn you not to try to park on the sides of the road because of the likelihood of getting stuck in the soft sand and I would agree with them. At various places along the way there were road crews fixing areas where the sea or wind had caused sand to encroach on the road. Early in the morning when we headed south there was very little traffic but on the way back there was considerably more. This is not a place I would visit in summer when the crowds would probably be horrendous. 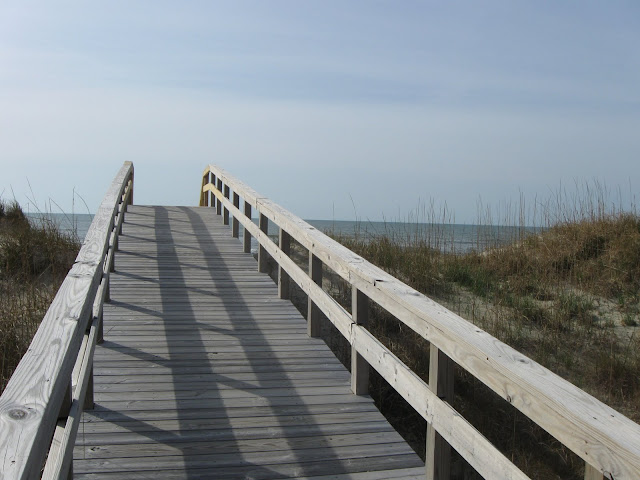 A walkway going from the parking lot to the ocean. 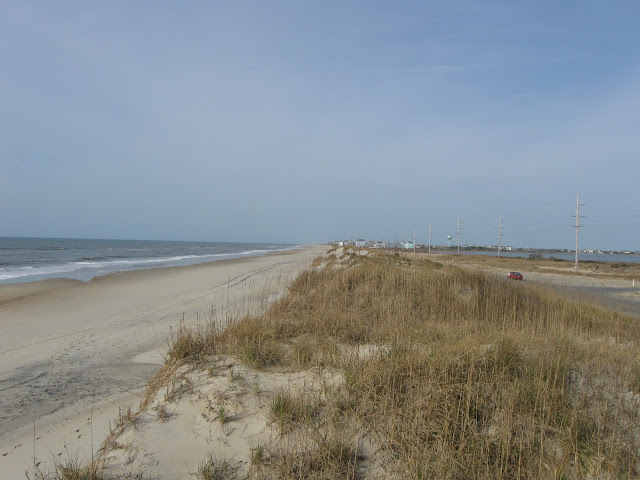 The view south. It's quite a large barrier they have built to protect the road from the waves. 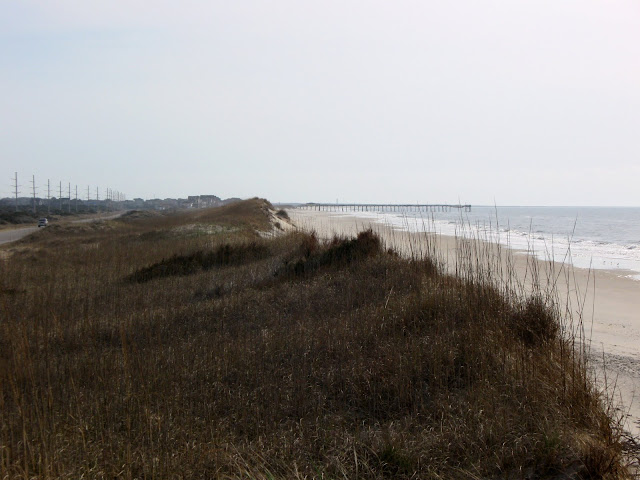 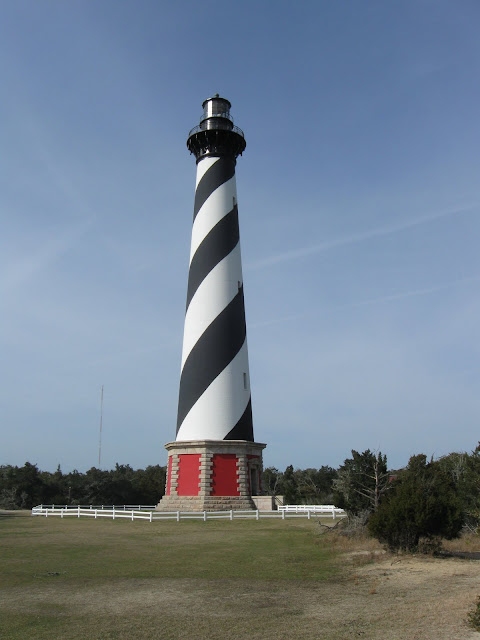 The Cape Hatteras Lighthouse in its new position. It is the tallest lighthouse in the US and 20th in the world. 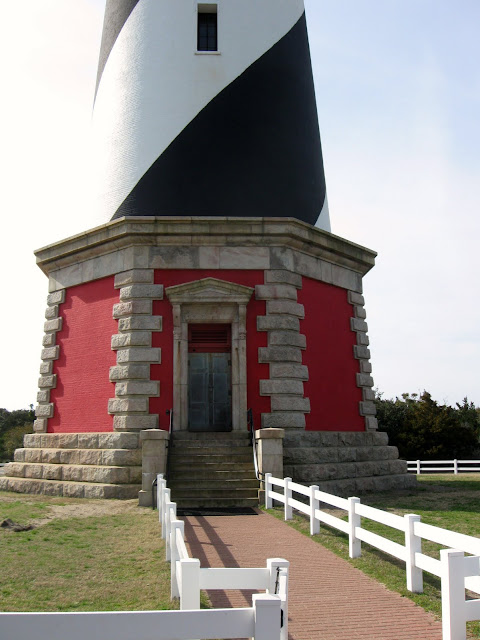 The base is particularly impressive. 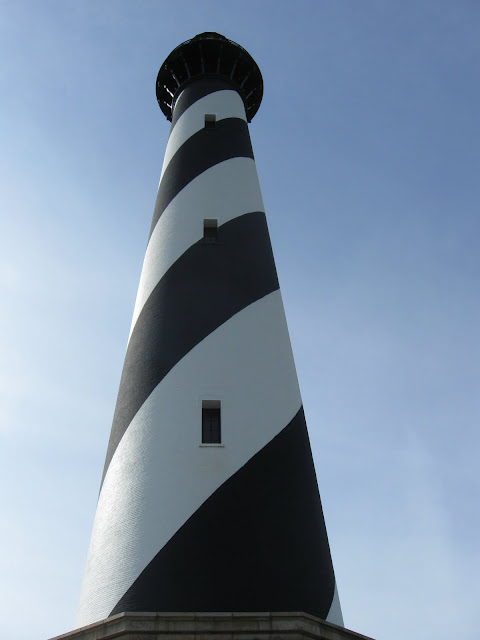 It's a terrific looking lighthouse, especially with the striping. Unfortunately, the new position which it was moved to in 1999-2000 is surrounded by brush so you don't get much sense that the ocean is nearby other than the noise of waves. 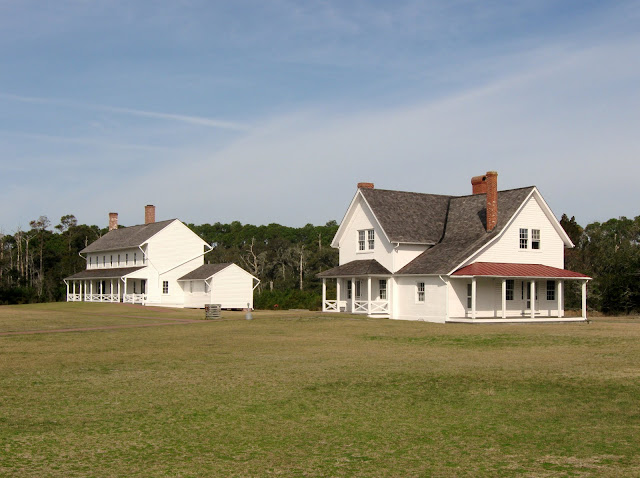 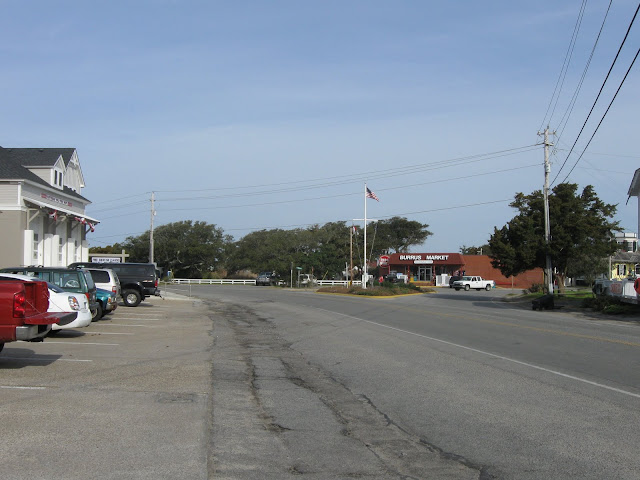 The lighthouse itself is in Buxton and not in Hatteras. Buxton has a different feel to most of the other seaside towns along the coast and the reason appears to be dirt. The other towns are built on sand and there woukd appear to be dirt in Buxton because there are trees that would need dirt to survive the sea winds. There are also a large number of older houses and the pick positions appear to be the ones with the view west over the sound. This place would be an absolute zoo in summer, I imagine. 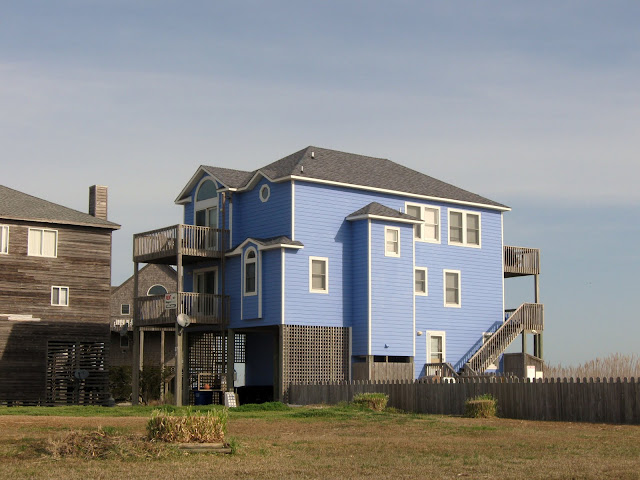 I was intrigued by the blue paint. Many of the other houses just have the weathered grey colour. The shape of the houses bothers me and I wonder just how many of these house would survive the next really strong hurricane that will inevitably come this way. 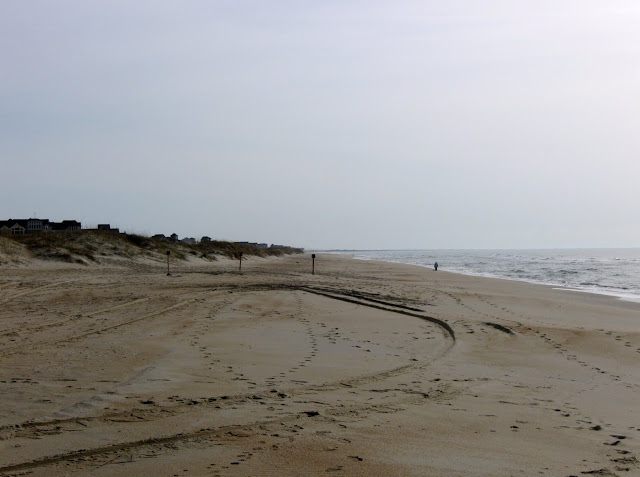 The beach at the tip of Hatteras, ruined by tyre tracks. 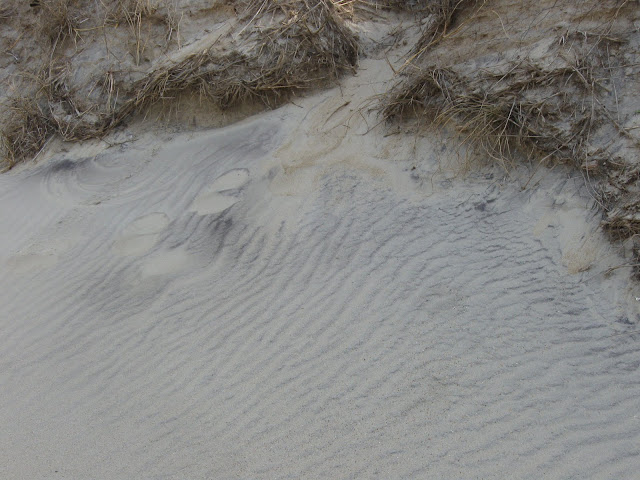 I liked the patterns in the sand. Click on the picture to see more detail. 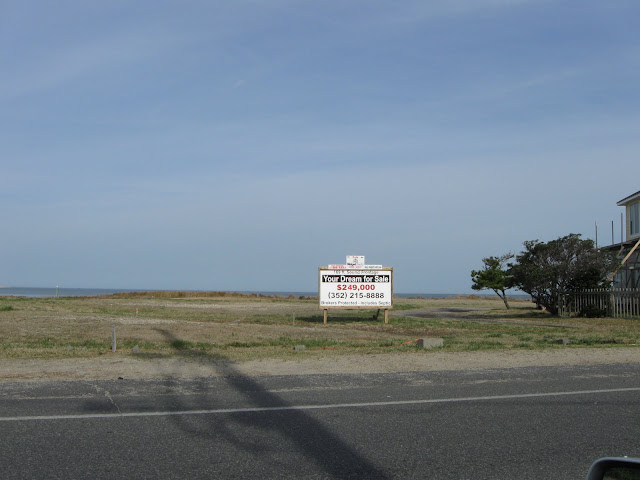 For a quarter of a million dollars, this view at Hatteras could be yours. 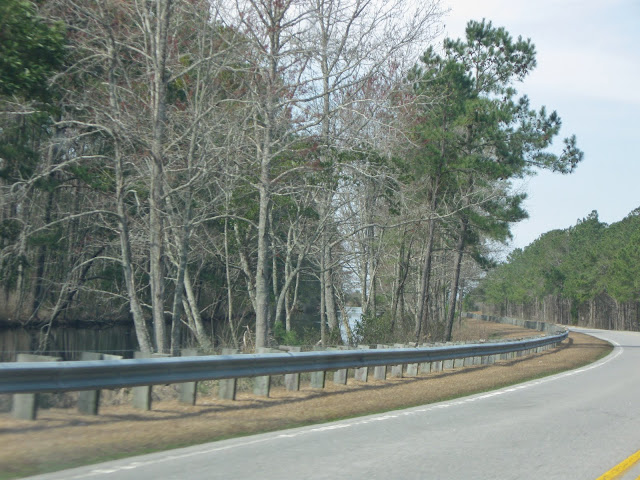 The drive west along Route 64 from Nags Head across the Albemarle is really pleasant. There are some amazingly long bridges over the water and then you hit a stretch of road where there is a canal of sorts that follows the road for mile after mile. I suspect it is just a drainage channel because the area is swampy. 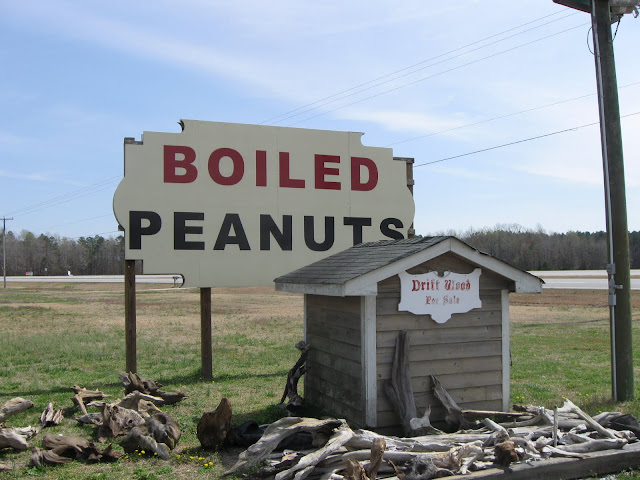 One of the pleasures of travelling in the south is the availability of boiled peanuts. Not everybody likes them, but I love the slimy, soggy things. 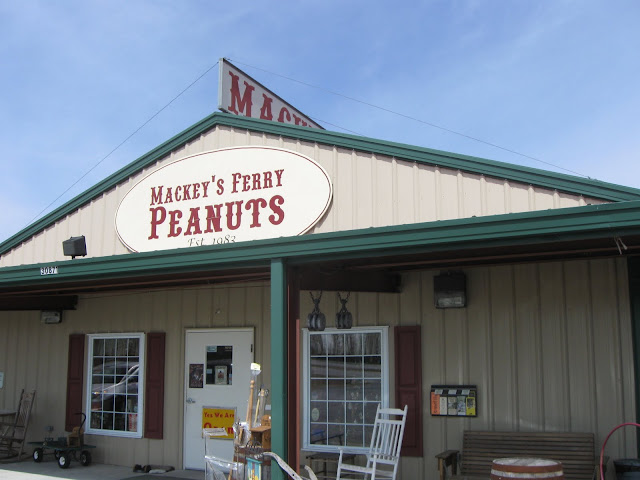 So we ventured into this establishment and duly bought a pint of warm boiled peanuts. Everything you hear about a warm welcome in the south is correct. The lady behind the counter was very welcoming and gave us samples of just about everything they sold.
My addiction to boiled peanuts started back in Oz when we would go to the Railway Picnic held at Torquay near Maryborough, QLD. The railway employees erected a huge tent and we kids would join a line where we were given various food items, a drink and a bag of boiled peanuts. These peanuts were not boiled as long as the American version, but I developed a taste for them. I first came across them in the US when I was doing a car trip heading west from Orlando, Florida to the gulf coast. There was a road side open stand where a bloke had a couple of kettles boiling up the peanuts. There were two varieties, normal and hot. Both were delicious.