Again it was a cold windy miserable looking day with rain predicted after lunch. Figuring I wanted a short day, I decided to see the Appian Way and possibly a catacomb.

I took the Metro to Porta San Giovanni, one of the gates of Rome. 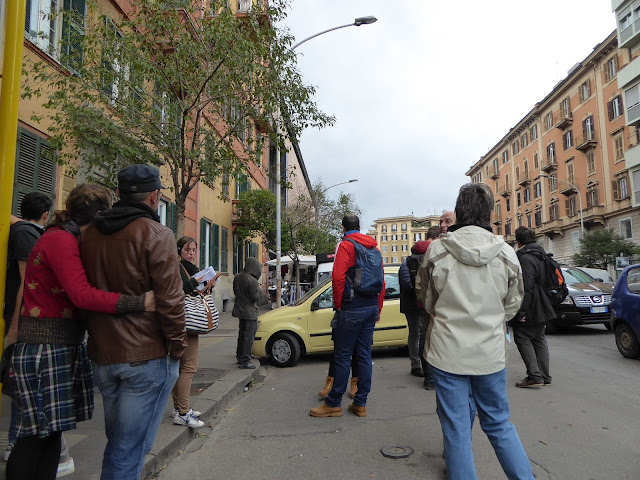 I then found the stop for the bus that was supposed to take me to the Appian Way but while other buses came and went, my bus never arrived. Eventually I gave up and walked. The bus arrived at my destination at the same time I did. There was a much larger crowd on the footpath waiting than what you see here. 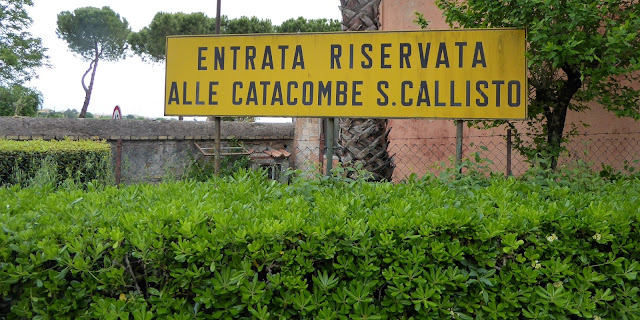 This catacomb is supposedly the first built for Roman Christians in the 2nd century AD. At one time it held the remains of  sixteen Popes as well as Saint Cecilia. 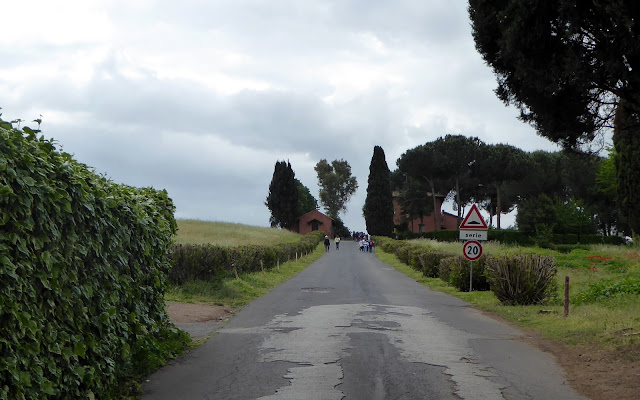 The Appian Way, straight as an arrow. 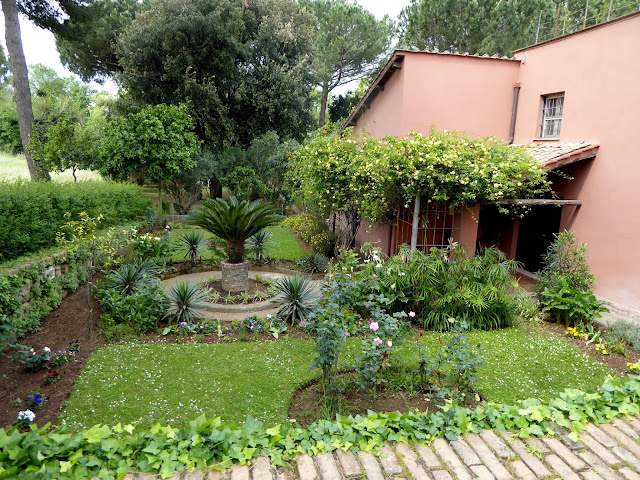 There are a few houses. This one had a lovely garden. 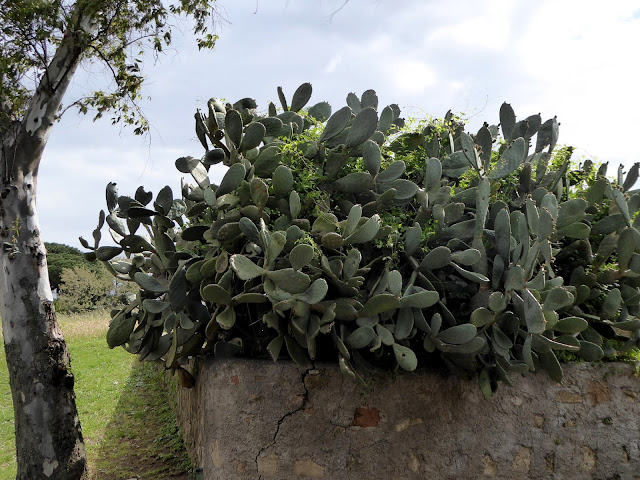 Prickly Pear. It was introduced into Australia and became a pest. It was subsequently wiped out by the introduction of a moth. 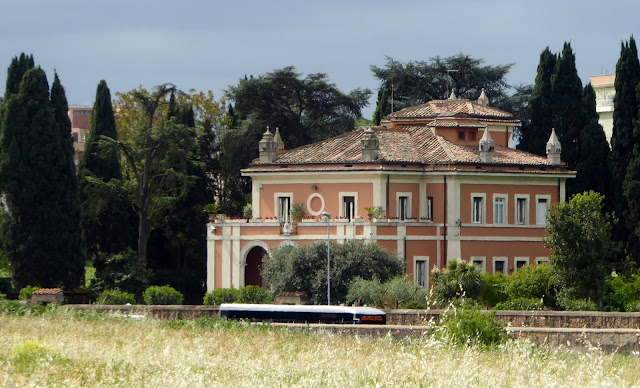 Distinguished looking abode. I suspect that living the good life would be very pleasant in Italy if you had plenty of money. 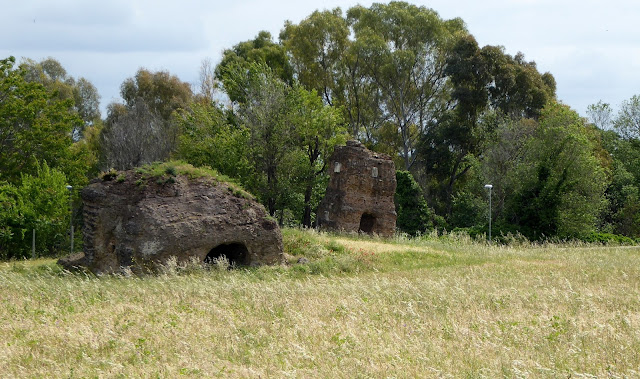 I have no idea what these are. 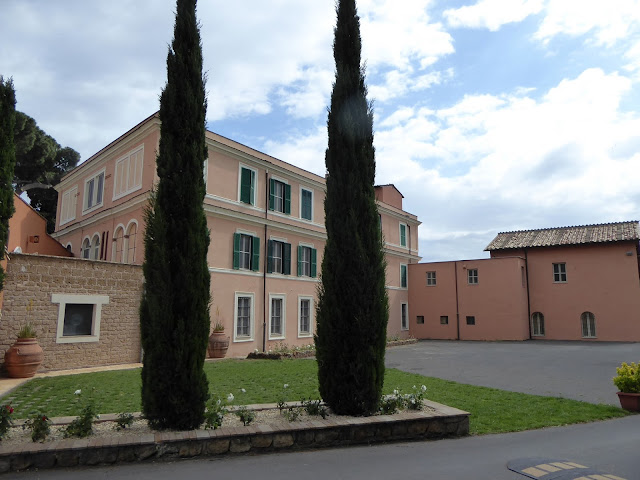 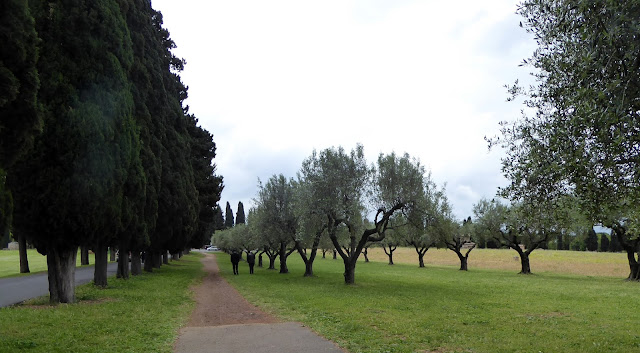 It's about a 1 km walk to the catacomb. 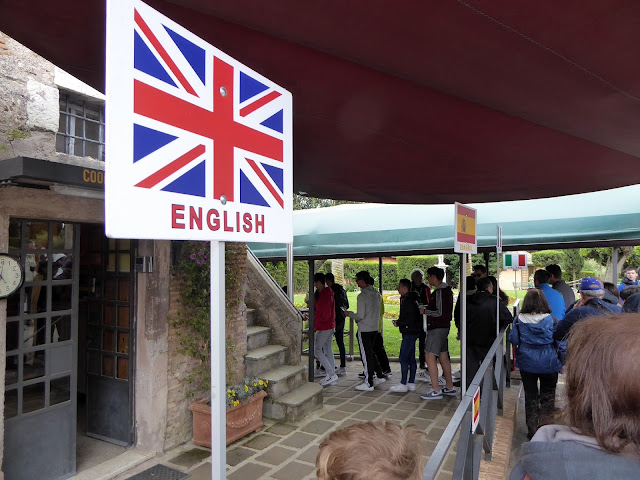 At 11 am the guided tours started. You lined up at the sign for the appropriate language. The English group was quite large and included some Russians. Our guide turned out to be a priest from the Philippines. 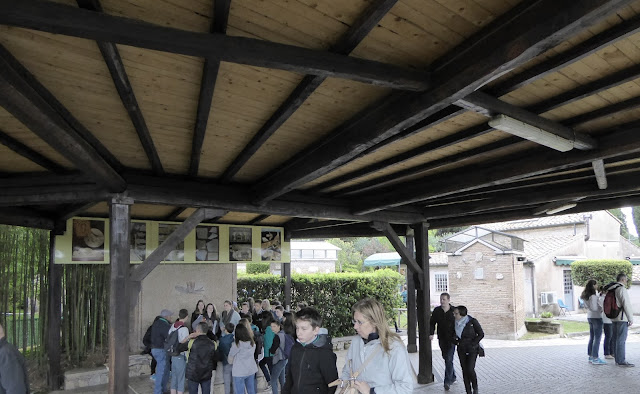 I was interested in the roof. The guide gave us an introduction to the origins of the catacombs and their subsequent history. This was the first of them and was quite large. There are four levels but only the second level is open for tours. 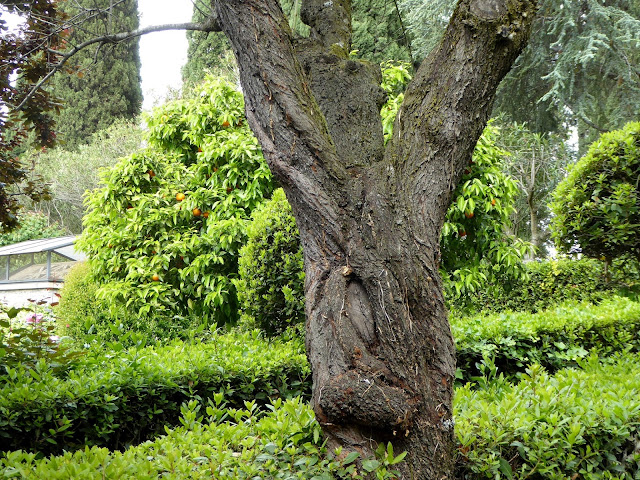 Can you see the oranges on the tree in the background? 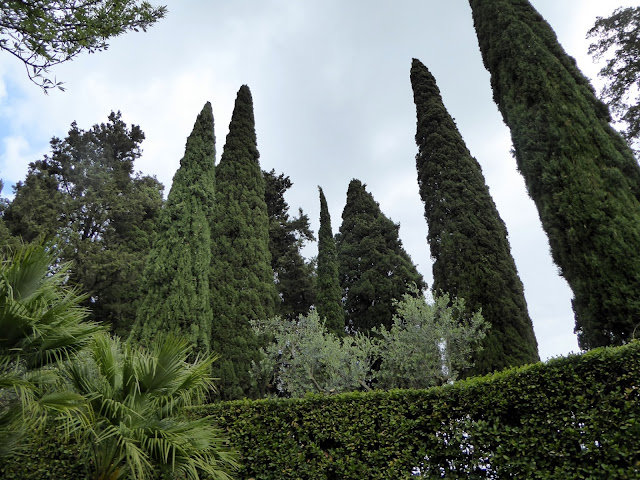 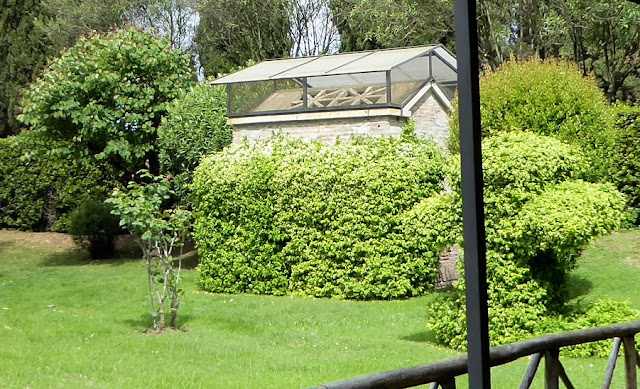 These little buildings act as ventilation shafts and were also used to haul up dirt as the catacombs were enlarged.

Photography is forbidden underground so no photos. The guide was good and I would recommend that you read the Wiki article. Since my mother was named Cecelia, I was interested to see where Saint Cecilia's tomb had been and to hear more about her and the story of her execution.

Interestingly the ground contains sulfur which is released as a gas. If inhaled for long periods it is very dangerous so the guides are only allowed to go down underground a few times a day and for limited periods. 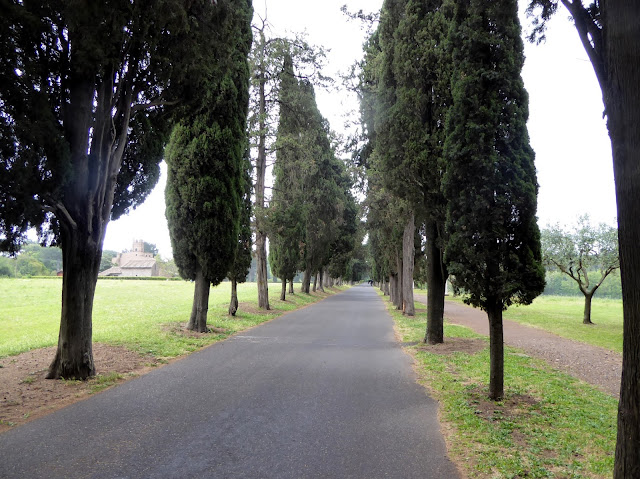 It was raining when we emerged from underground so I hoisted my tiny orange umbrella and set off to walk a little further along the path. After a while it just seemed pointless so I turned round. 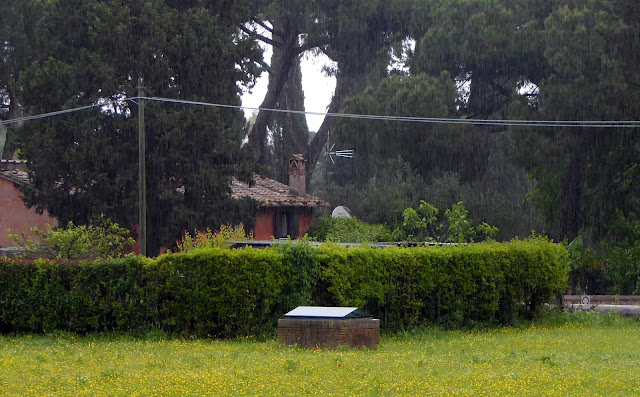 Another ventilation shaft covering, quite some distance from where the tour had taken me underground. These catacombs were enormous and really very interesting. 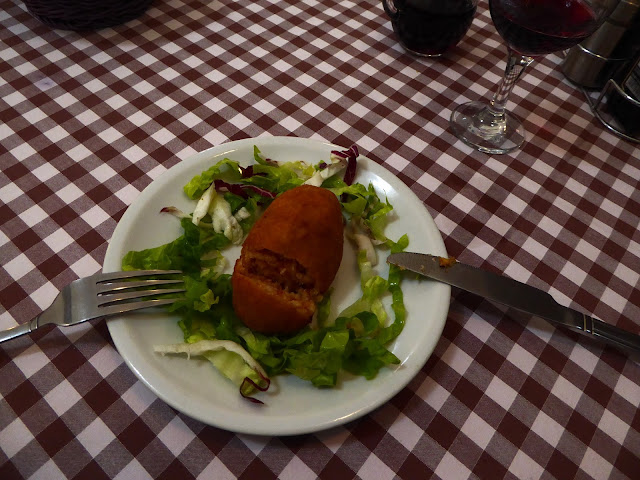 My friend Geoff had suggested trying some gelato from a place near Termini that is supposedly the best in Rome. Along the way I had lunch which started with this suppli. It was pretty good. 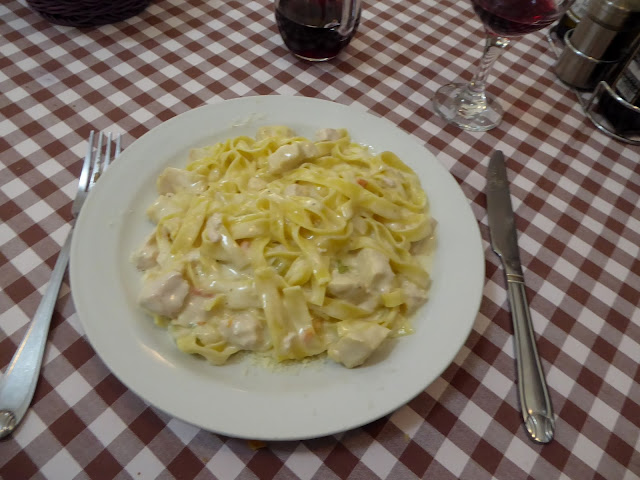 The Fettuccine Alfredo was good and the red wine was quite drinkable. Eating my big meal of the day at lunch time is working better for me than waiting until late in the evening.

So here is the Geletaria La Romana which gets rave reviews. 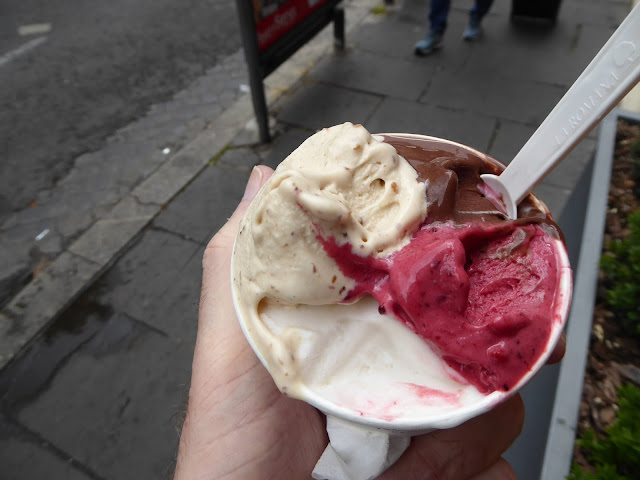 I only had to wait in line a couple of minutes to get my three euro cup. The hazelnut was superb A+. The mixed berry very good A. The lemon ok B+. The dark chocolate just a pale imitation of the Fattori version B. Perhaps the best geleteria depends on which flavours you prefer.

By the way, I am wondering if I just don't like the taste of Italian lemons. I much preferred the lemon gelato from Bella Gelato in Adelaide and I find the lemon flavour here in Italy somewhat too bitter.