Hervey Bay was named by Captain Cook in 1770 on May 22 after Augustus Hervey who was an English Naval Officer. It's something you usually don't think about but when you are an explorer you need to have a capacity to think up names for various features you come across. Of course, the indigenous people were here first and they were the Butchalla People. 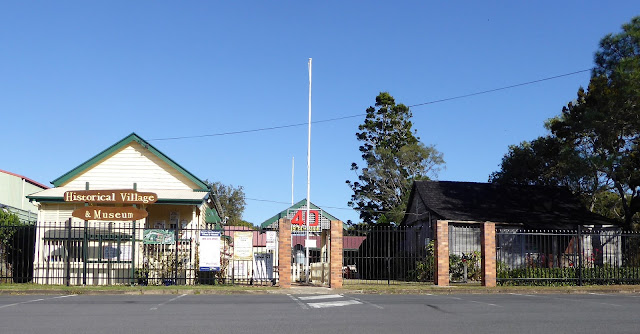 The entrance to the Historical Village in Pialba. It consists of a collection of old wooden buildings that were moved here. Years ago the most common building material was wood. The local trees are excellent for building and are usually a very dense hardwood. Some of the wood is so hard that you need to drill a hole before you try to hammer in a nail. 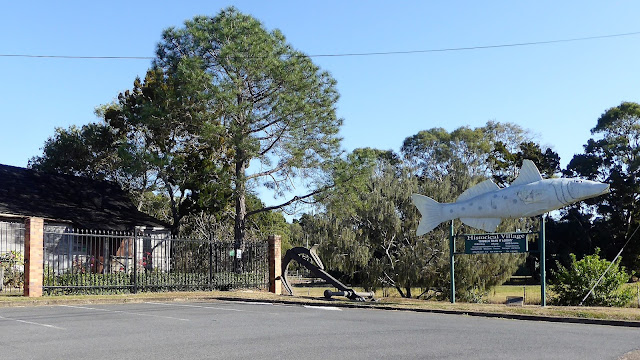 This shark used to adorn an attraction in Urangan that closed a few years ago. 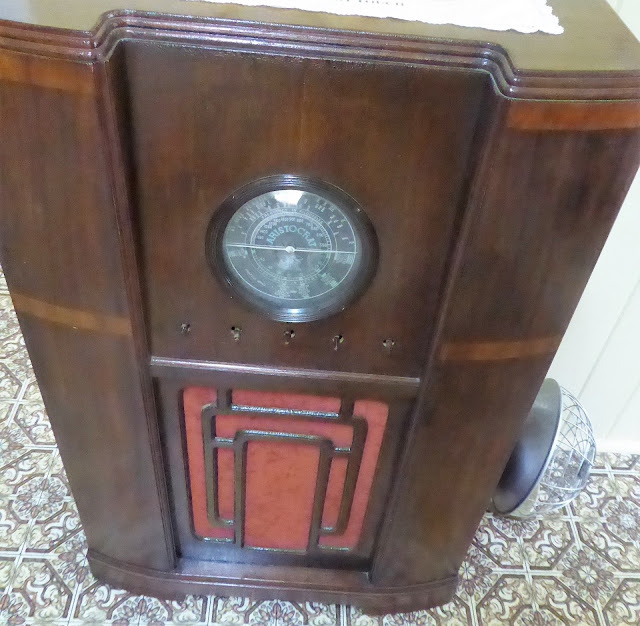 We paid $10 each and got to wander around various exhibits of articles from long ago. Some of them I could recognize from my childhood. Here was an old radio from a company called Technico. Curiously, along with gorgeous radios like this they also made vacuum cleaners and rotary lawn mowers.

This radio probably dates from the 30's and I would have loved to have been able to look inside from the back. 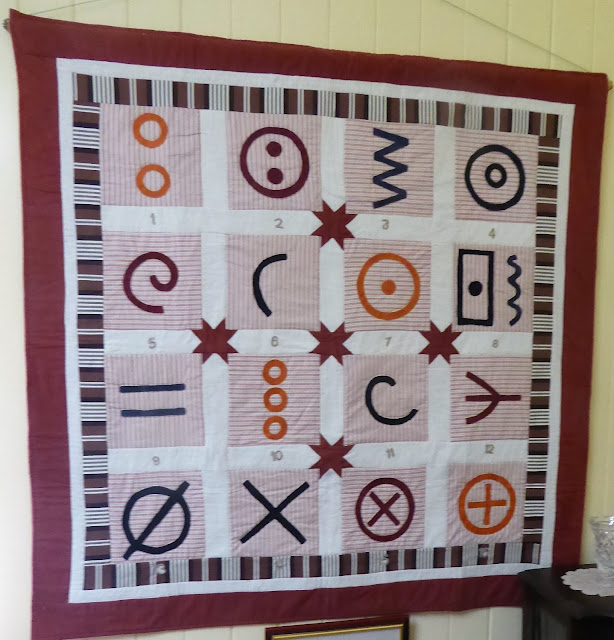 An interesting quilt based on signs posted by swagmen / drifters during the 30's depression. 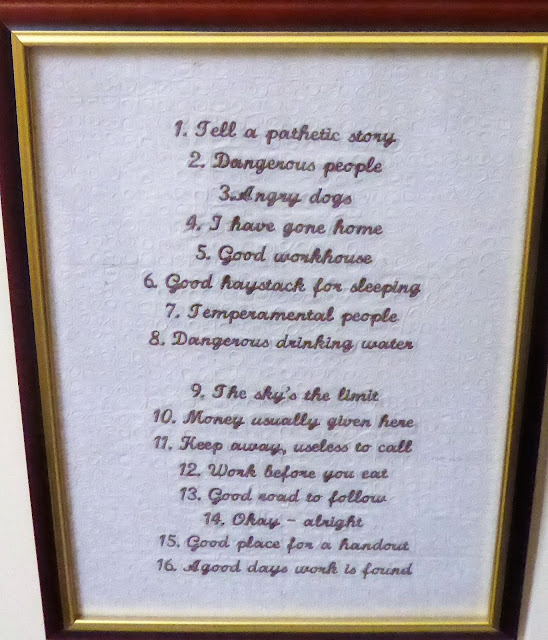 The meaning of the signs. 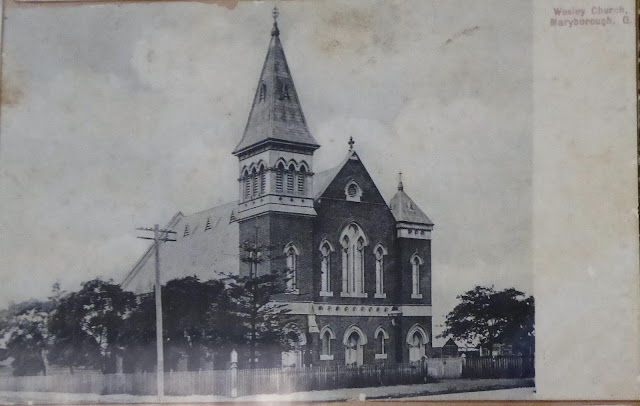 Picture of the church in Maryborough that I used to go to. It was demolished. 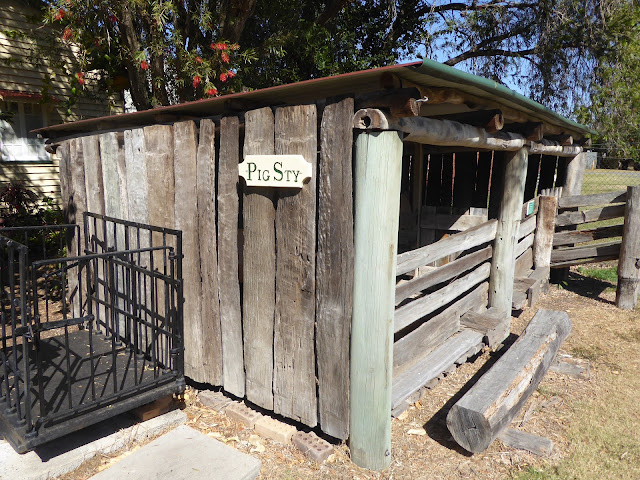 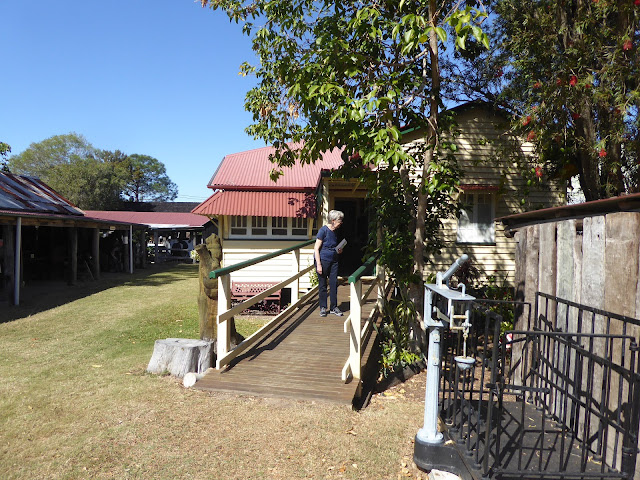 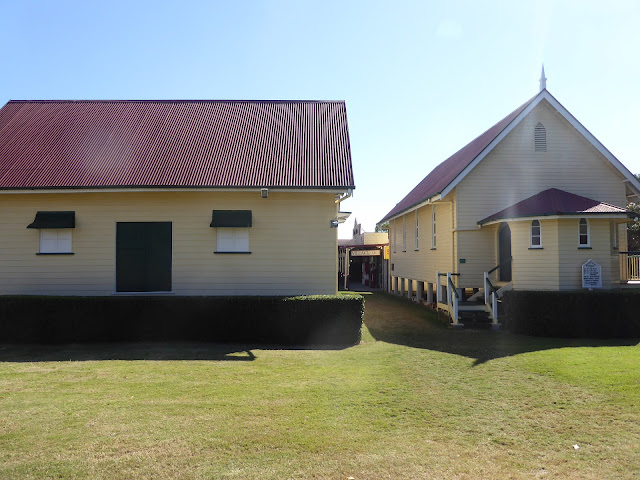 I actually attended that church on the right when we went to a Methodist Sunday School camp in Pialba when I was a child. 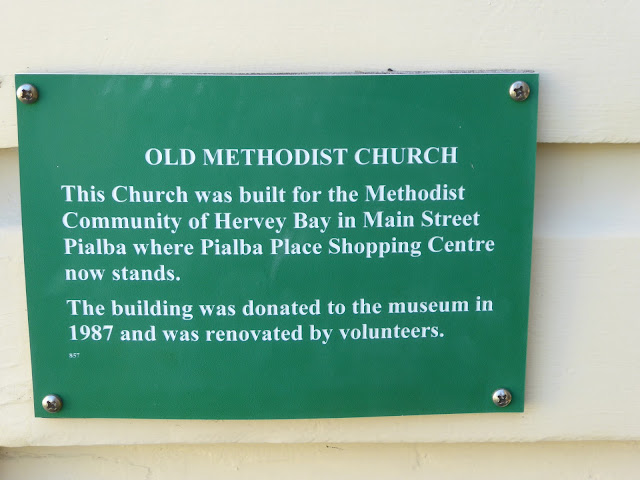 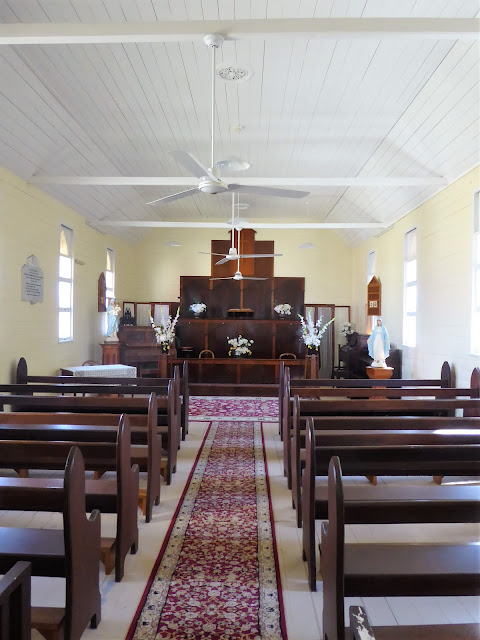 Inside. Apparently it is still used for weddings. 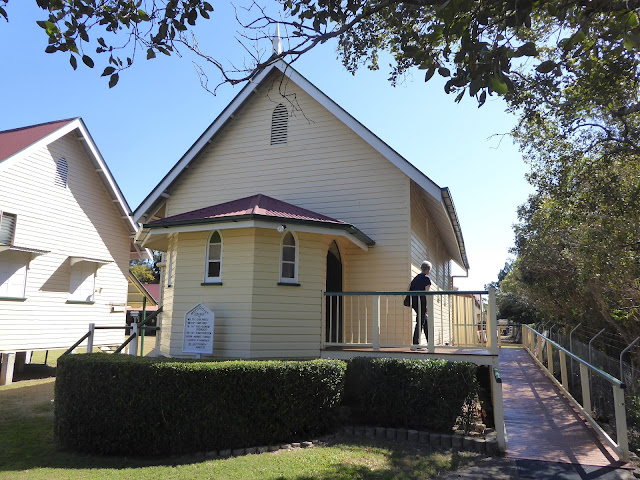 It is a little depressing to think that my memories are now of historical museum level quality.

There used to be a train line that ran from Maryborough to Hervey Bay and this was one of the stations along the way. 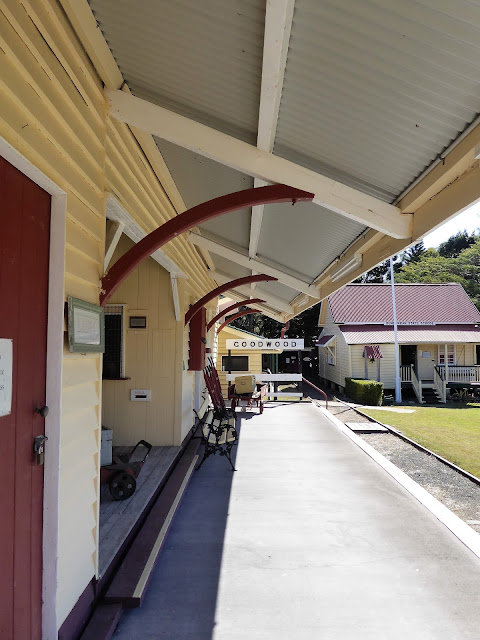 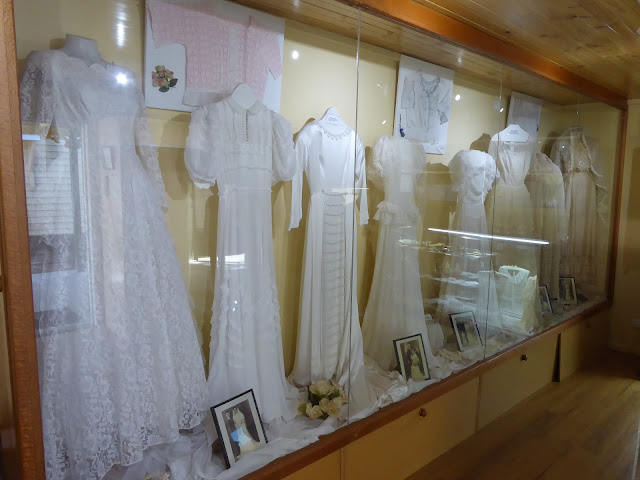 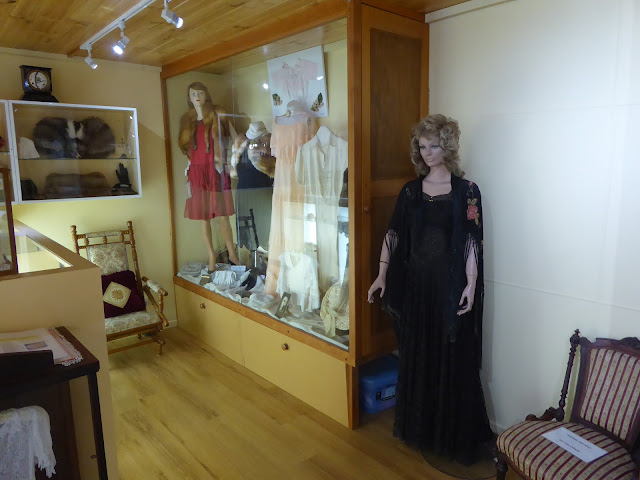 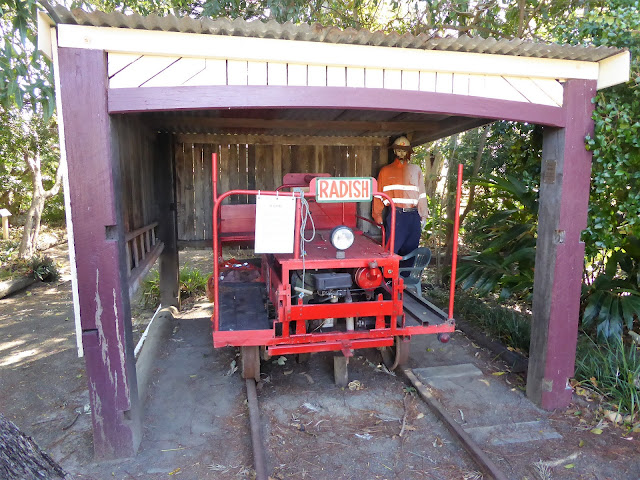 Radish was the name of a race horse who was the star of a comic strip that appeared in Aussie newspapers. Here is an example. Each year, Radish would be entered into the famous Melbourne Cup horse race but somehow some misfortune would always occur on the way to the track so Radish never got to race.

If you clicked on the link you went to the Trove website that has images of old Australian newspapers from way back. 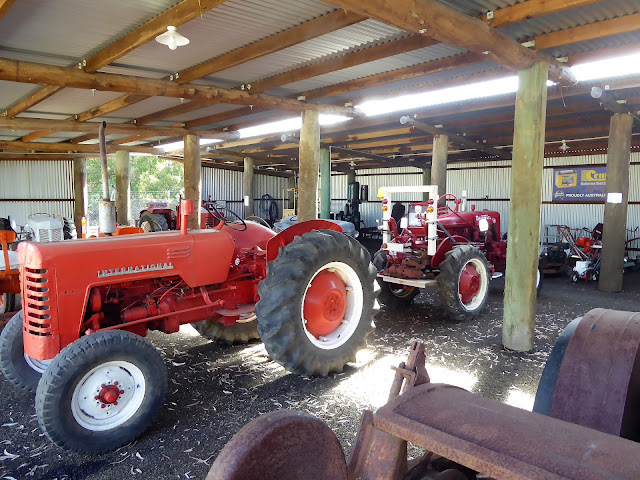 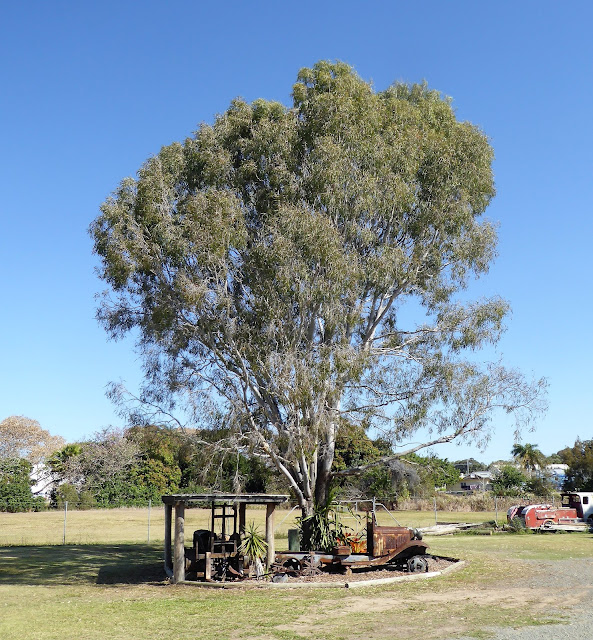 Unfortunately there was a bad fire at the museum a few years ago that destroyed sever vehicles. I suspect these are the remains under the tree. 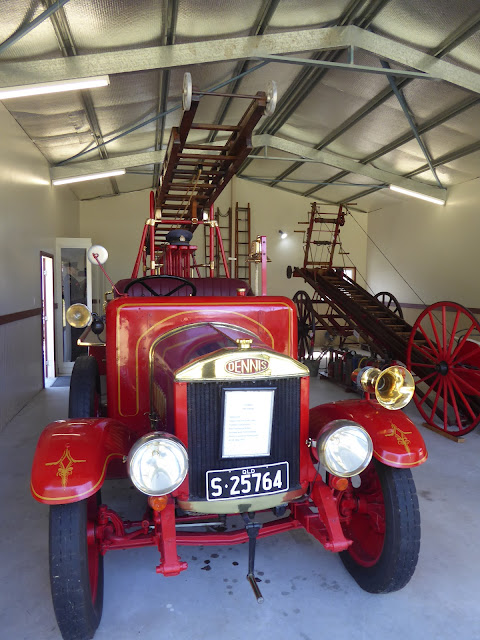 One of the burned vehicles was an old fire engine and they now have a replacement. 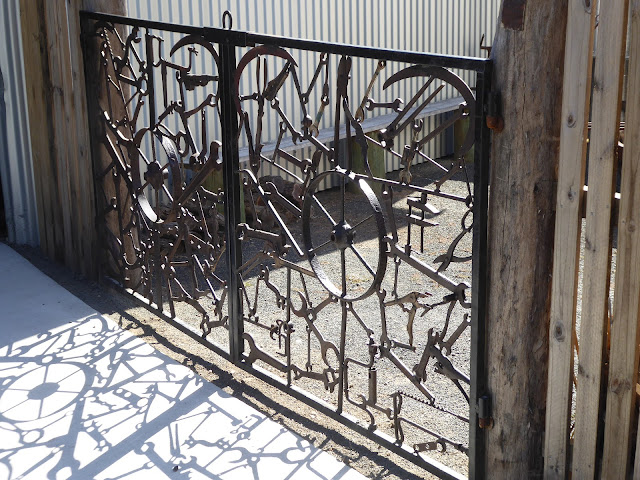 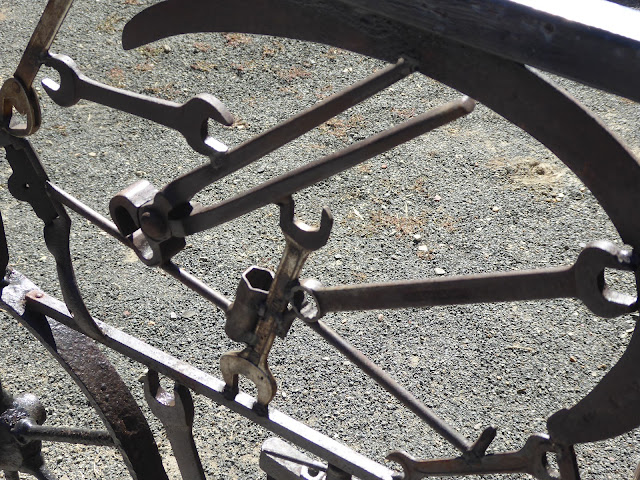 Maybe I should learn how to weld. 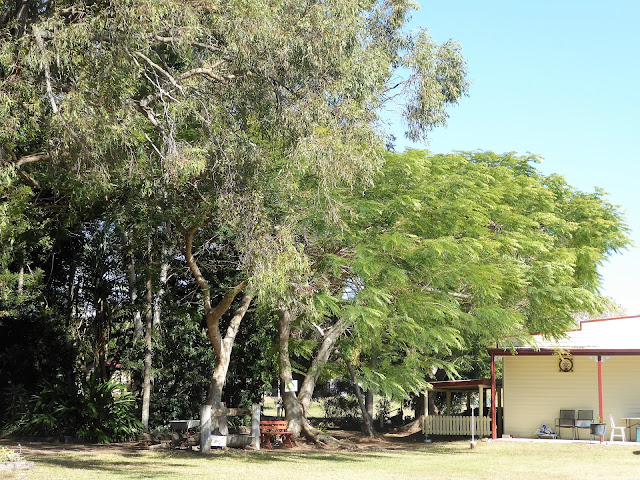 It was a lovely afternoon sitting on a bench, looking at the trees and enjoying a cooling breeze. 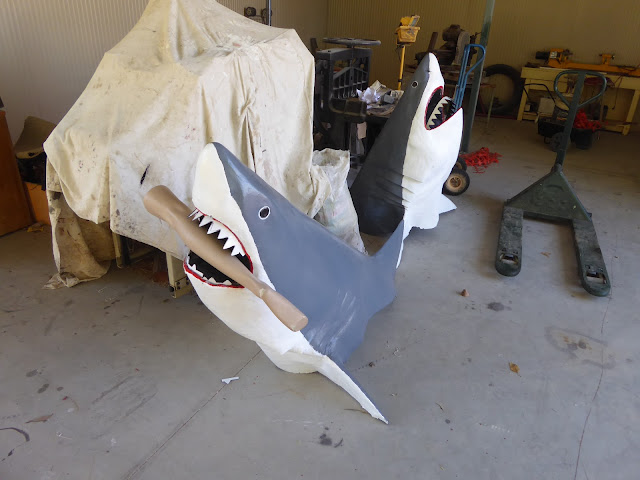 Left over sharks from the now closed Shark World. 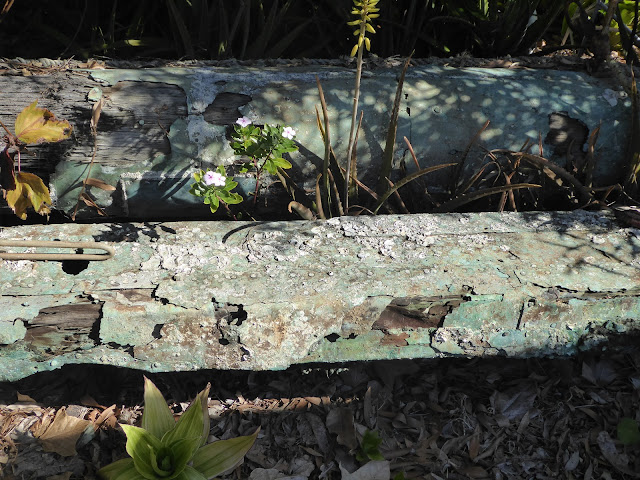 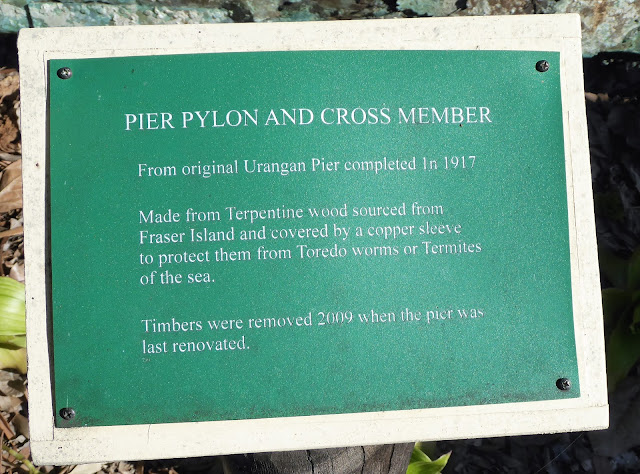 I have a small piece of wood from an old jetty pylon that was laying at the end of the jetty when the repairs were underway. 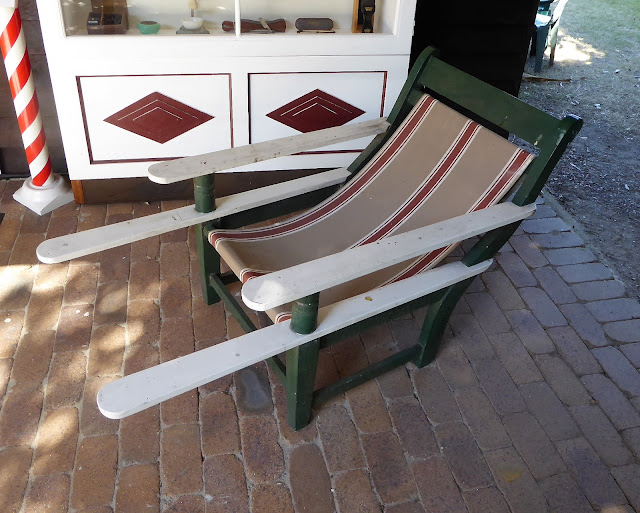 It's known as a squatters chair and my parents had one. We borrowed it when we were living in Brisbane during the early 80's. It is exceedingly comfortable. 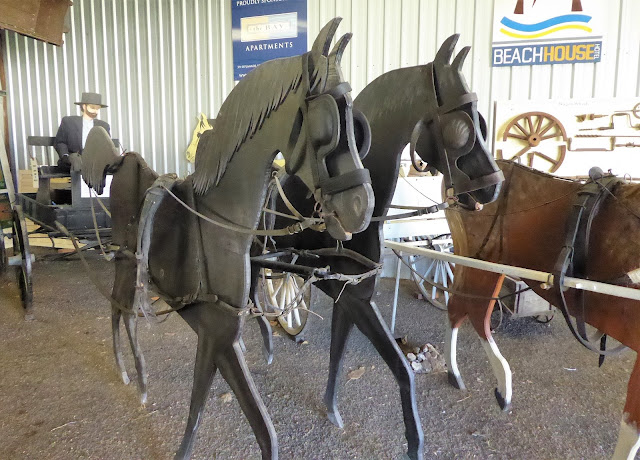 We loved these cutout horses that are hauling the old buggies. 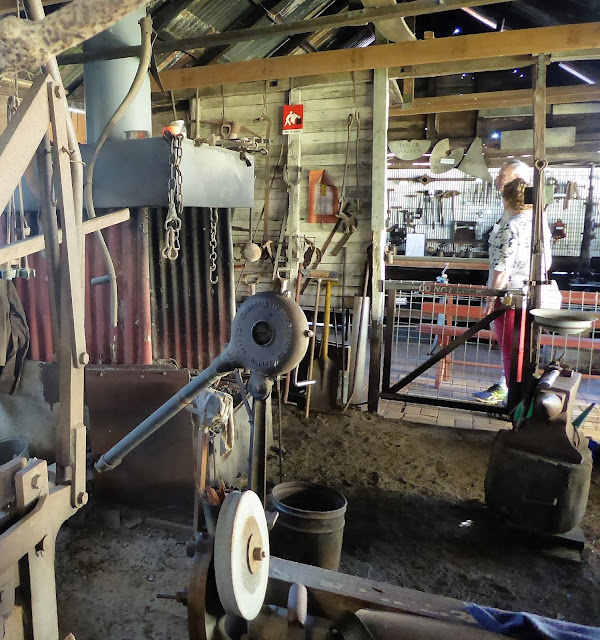 All sorts of old machinery. 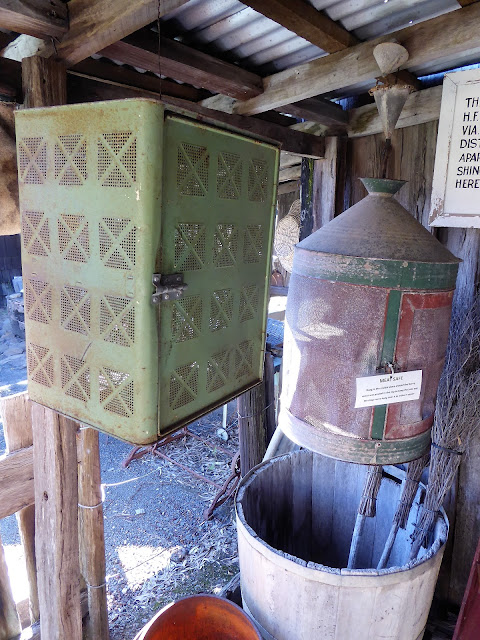 Food safe used when refridgeration was not available. 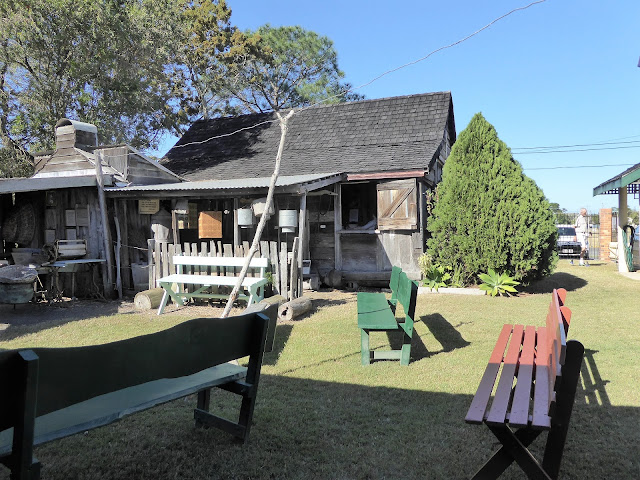 I enjoyed the visit more than I expected. Just before we left I was talking to three of the attendants and mentioned that I grew up in Maryborough. The two ladies had moved to the area but the bloke also came from Mboro and was two years behind me at school.