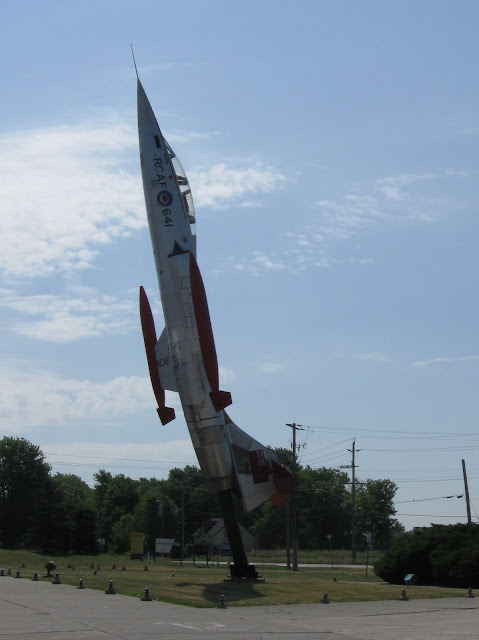 The Warplane Musem is situated on the grounds of the Hamilton Airport, not too far from Burlington. I quite enjoy going to see old planes but Marianne finds them to be as exciting as a bowl of cold porridge, so I went there alone.

In front of the Museum is a CF-104 Starfighter impaled on a big stick. Not mentioned in the blurb was the safety record of this plane. Canada lost over 50% of its Starfighters in crashes. Early models had an ejection seat that went down, not up. As Sir Humphrey would have said, very novel. 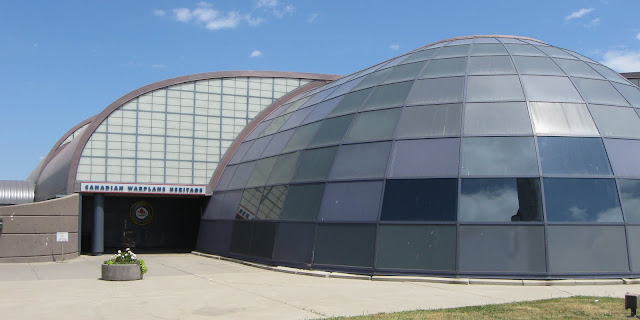 This structure was built in 1996 to house the collection, part of which was destroyed in a fire in one of the original hangers that had been used. 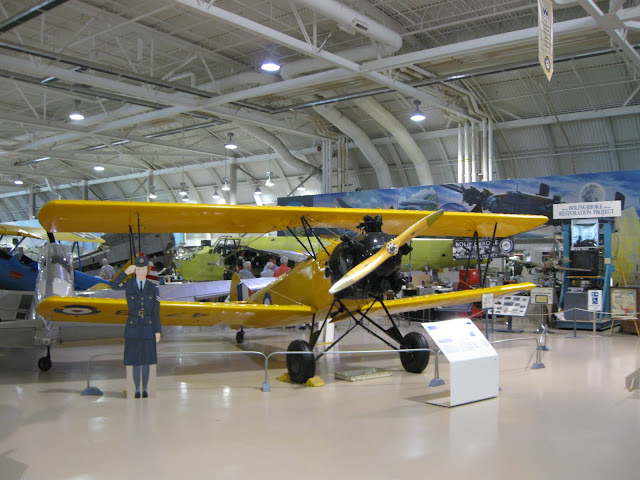 The display area is crowded with planes of all types. Sometimes you have to squeeze between the wings of planes to get around. 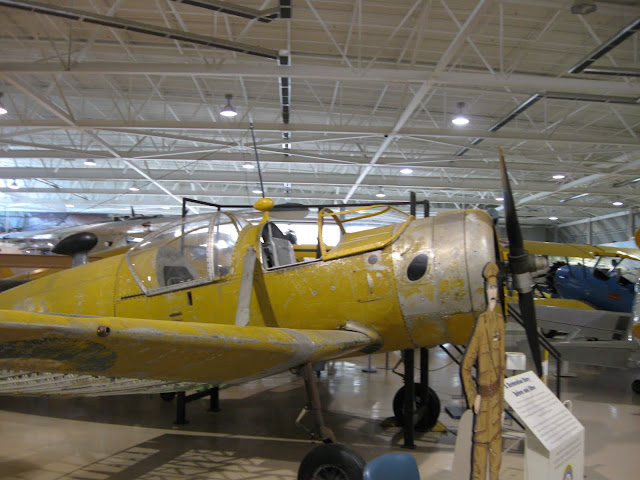 Restoration of planes is a major activity here. This side of the plane has not been restored and the other side has. There is quite a difference. I don't know why most of the planes have been painted yellow. 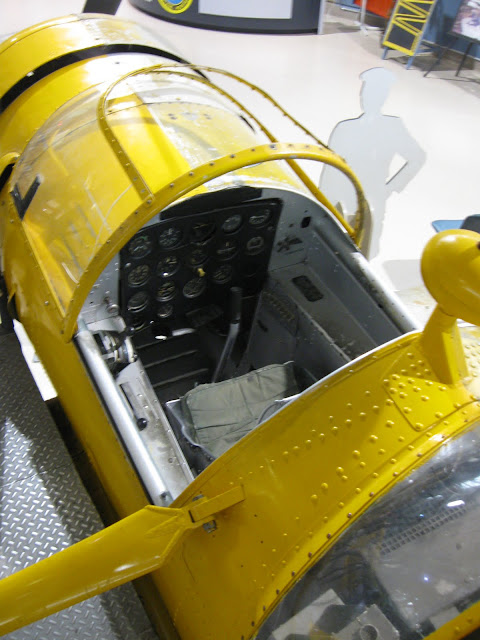 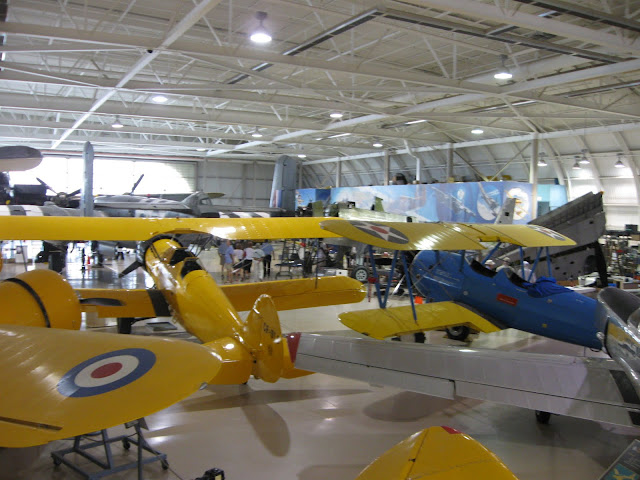 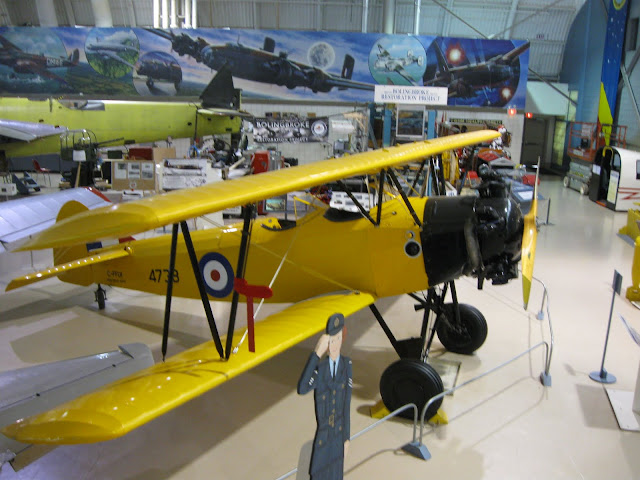 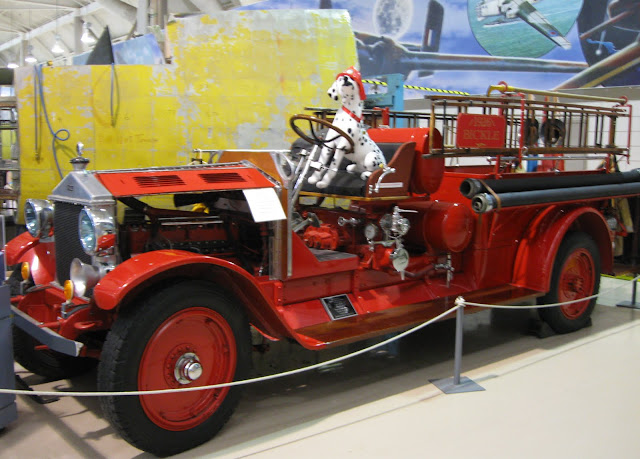 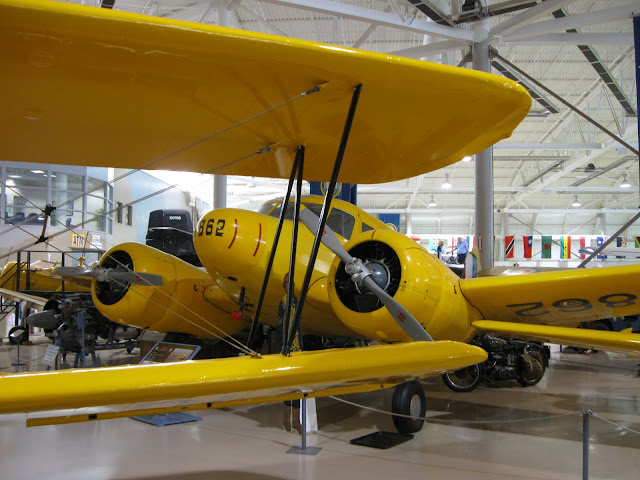 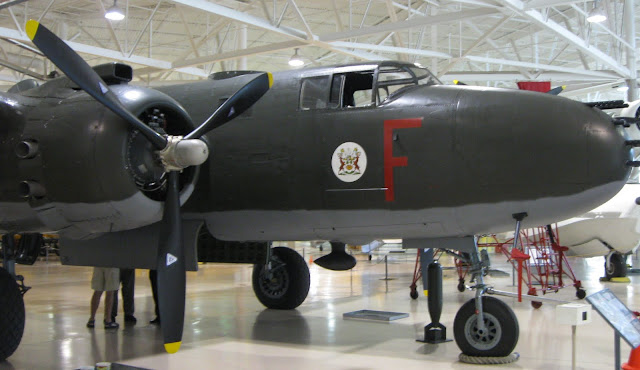 This is a B-25 Mitchell bomber similar to those that took part in the Doolittle raid on Japan. 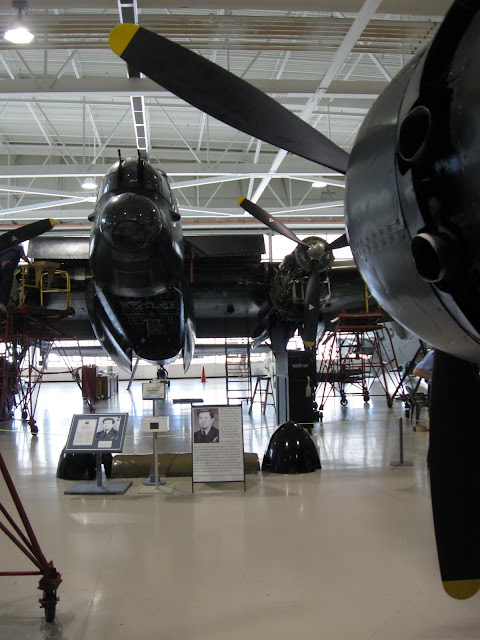 In the background is their Lancaster which is one of only two that can still fly. 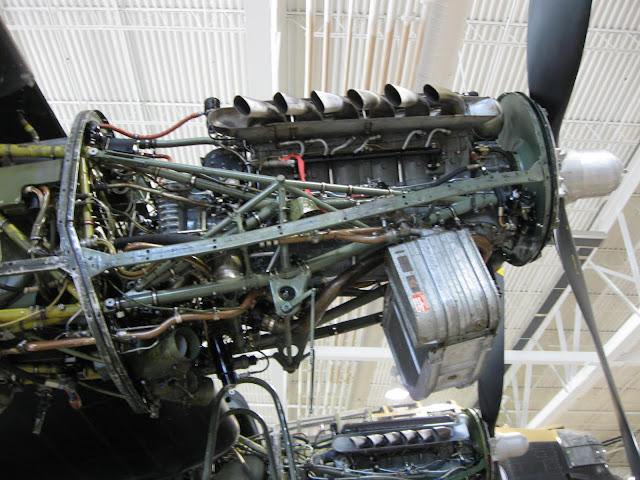 A Lancaster engine with the cowling off. 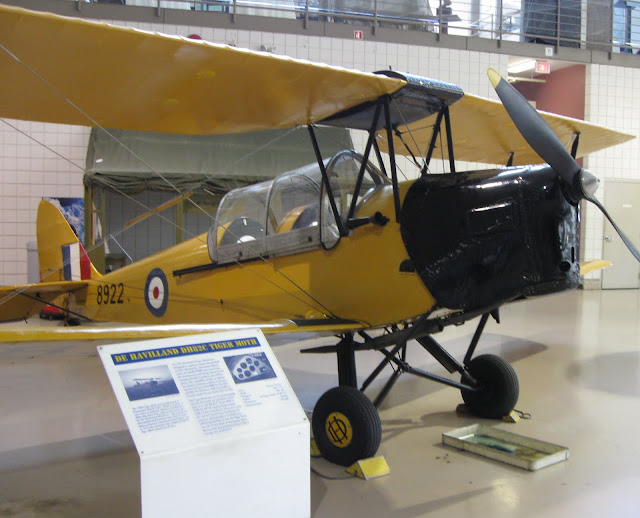 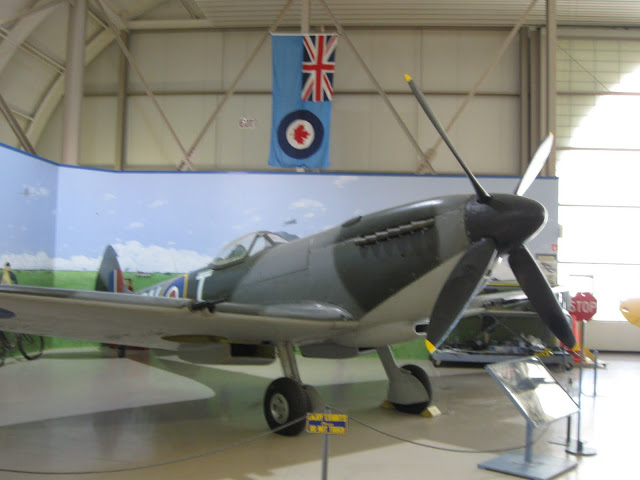 The have a Spitfire in a place of honour. 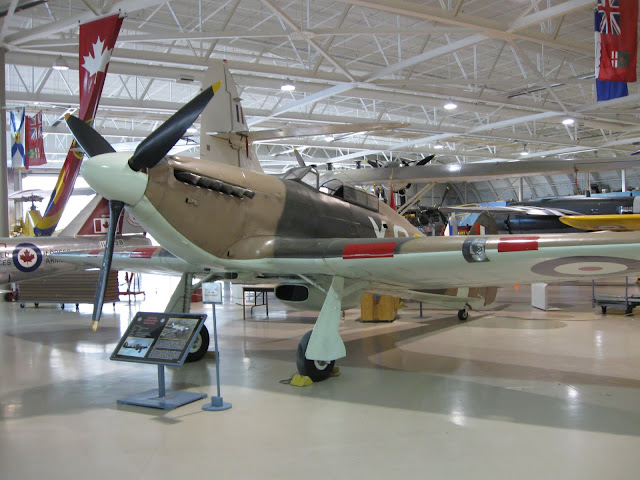 And a Hurricane. Apparently the original was destroyed in the fire so they build a replica. Incidently, the easy way to tell a Spitfire from a Hurricane is to look at the shape of the fuselage below the propeller. The Spitfire has a bulge. 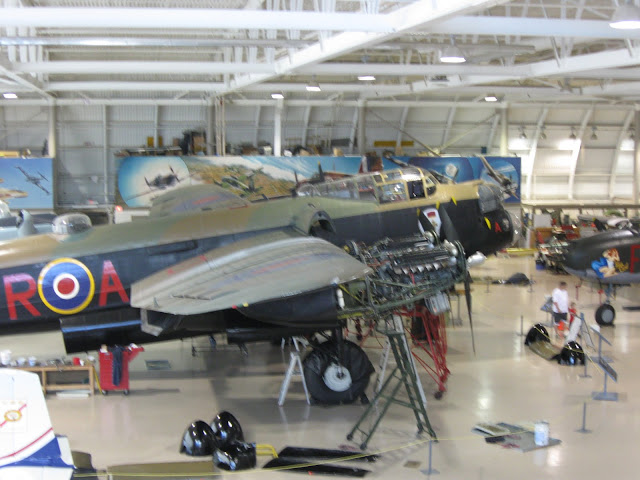 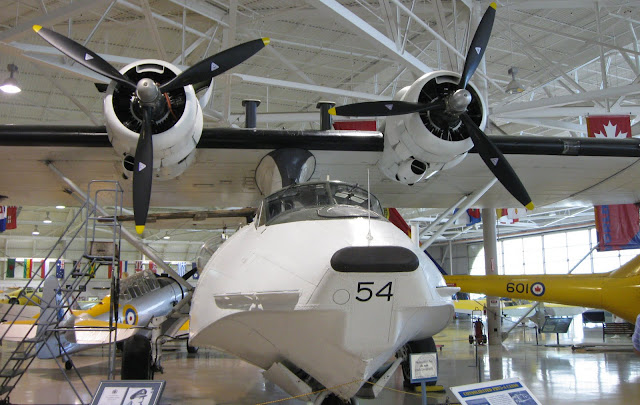 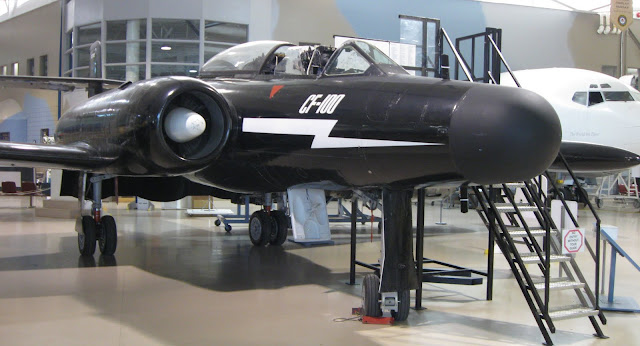 An Avro CF-100. With the black paint, it really looked fearsome. I'd never seen this plane before. 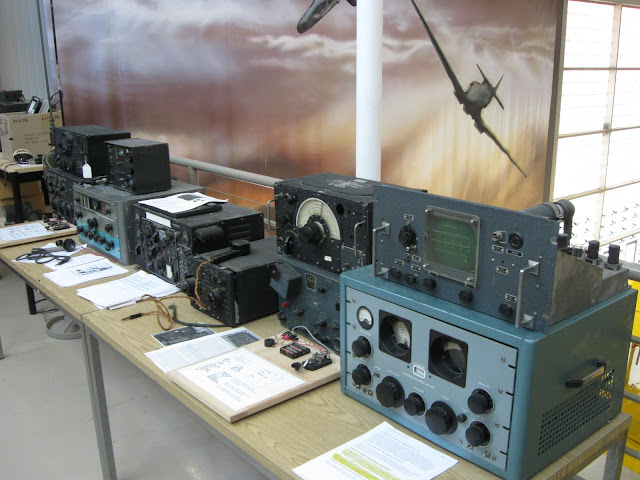 Upstairs they have a radio room filled with wireless sets used in planes. There is also a ham radio station.

They have additional planes outside. 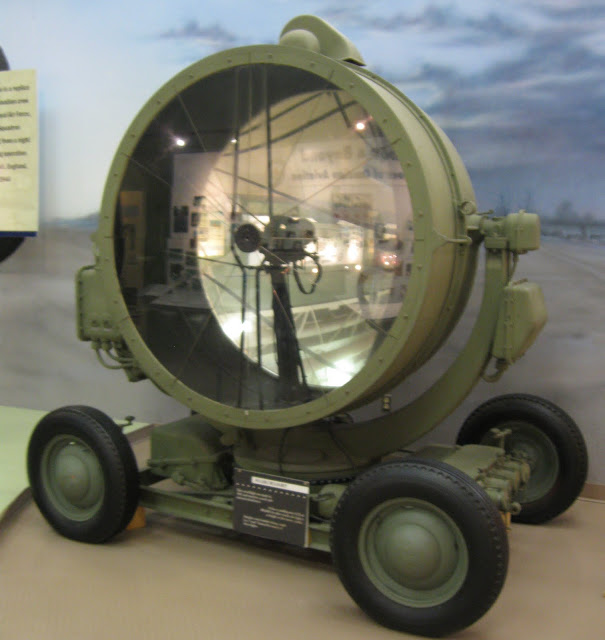 Last year when we were in England, our friend Kathryn's father came around for dinner and was talking of his experiences in WWII operating a search light. It was really interesting especially how they powered the device and the size of the copper cables they used.

I enjoyed my visit to this museum. Considering it is a volunteer museum it is very impressive for its range of planes. While a good number of the planes are trainer models, they do have a good representation of actual war planes.