I don't mind seeing the odd Shakespeare play so we looked up what was playing at the Stratford Shakespeare Festival. Twelfth Night was one of the plays I studied at school so I was quite keen to see it. It took about 90 minutes to drive from Burlington to Stratford. 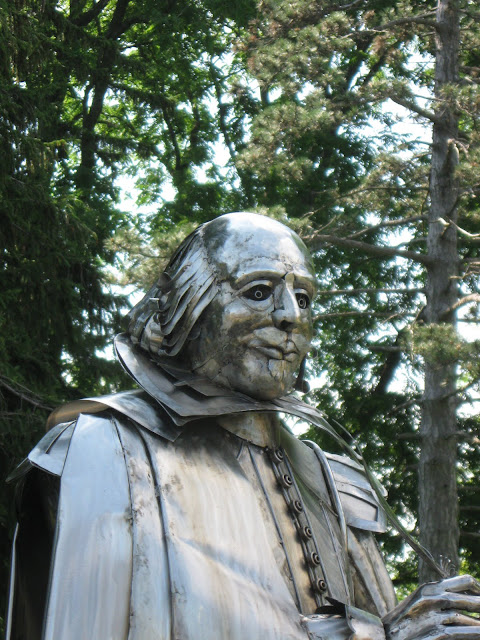 A statue to the bard. 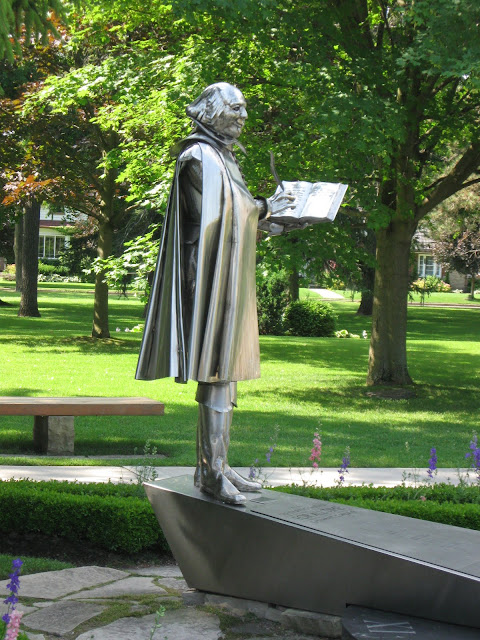 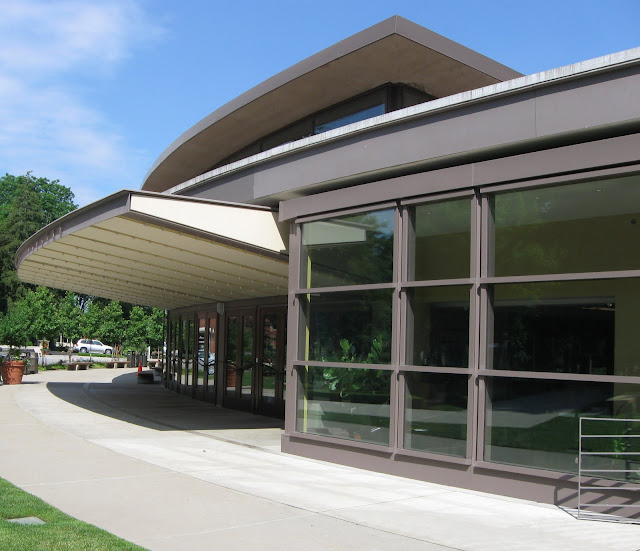 The entrance to the main theatre. 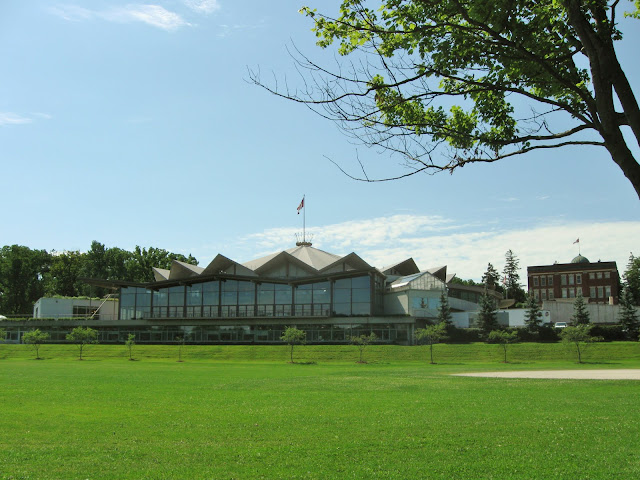 The theatre sits on a hill that slopes down to the Avon River. 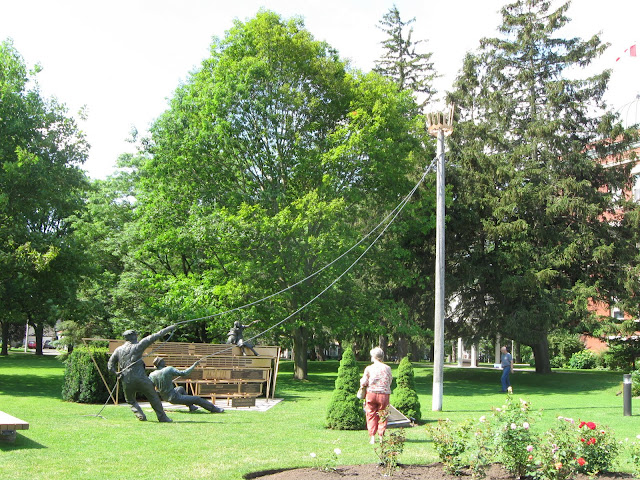 A statue depicting the raising of the tent that started it all. The history is interesting with Tyrone Guthrie and Alec Guiness featuring as the famous names that gave the festival legitimacy. 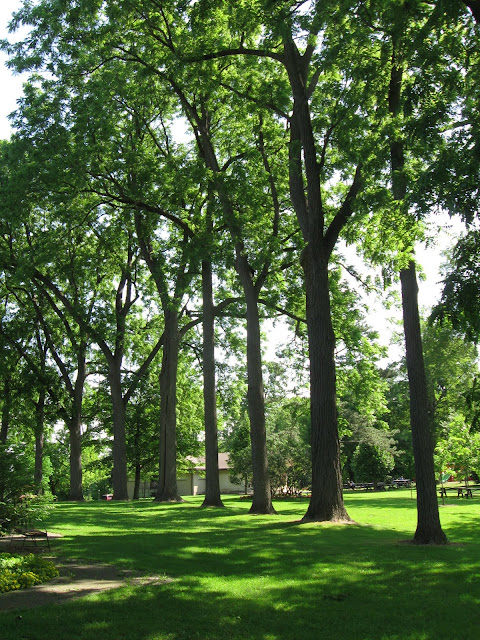 The theatre is positioned in a park setting. Fortunately, there is plenty of free parking in the streets near the theatre with plenty of tree shade to keep your car cool. 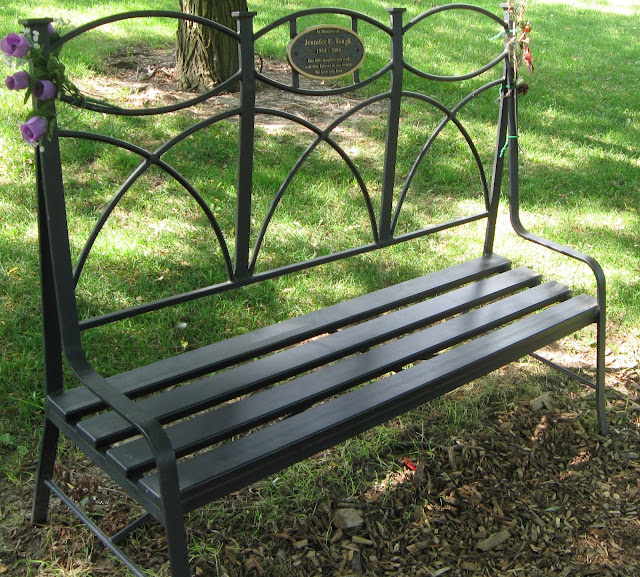 There are plenty of these distinctive benches scattered all over the park. 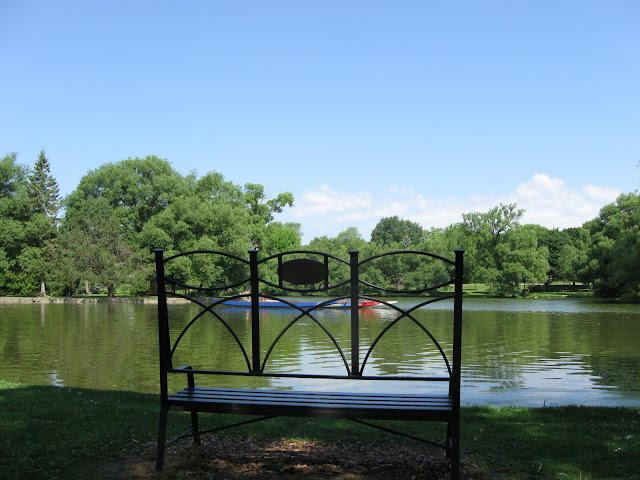 Down by the river which widens into a lake just below the theater. 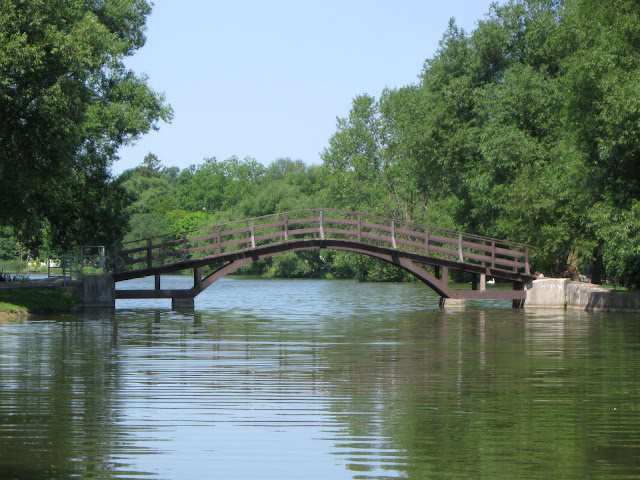 A bridge that leads to an island in the lake. 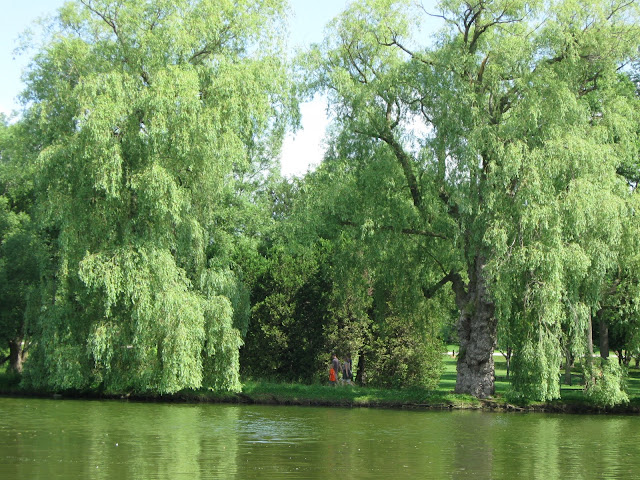 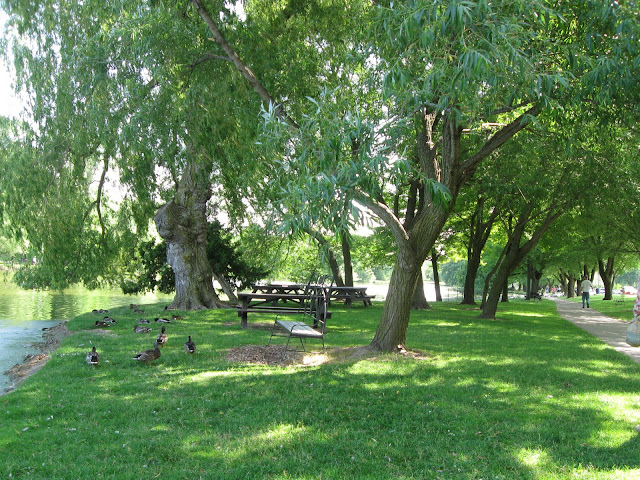 Apparently on busy summer weekends, people have picnics prior to the performances. There were quite a few people strolling up and down on the Wednesday we attended, but no picnics. 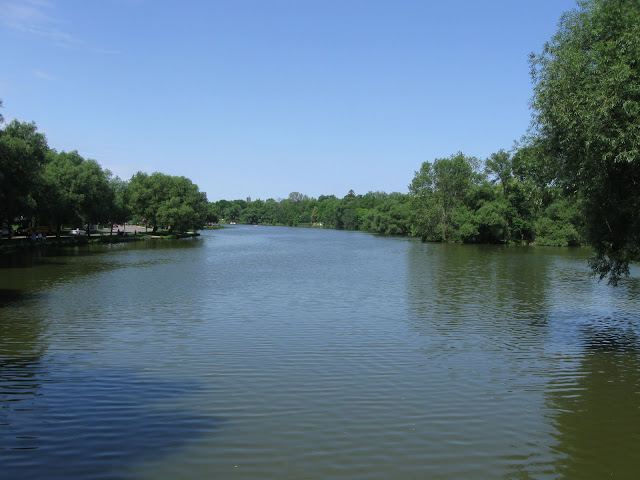 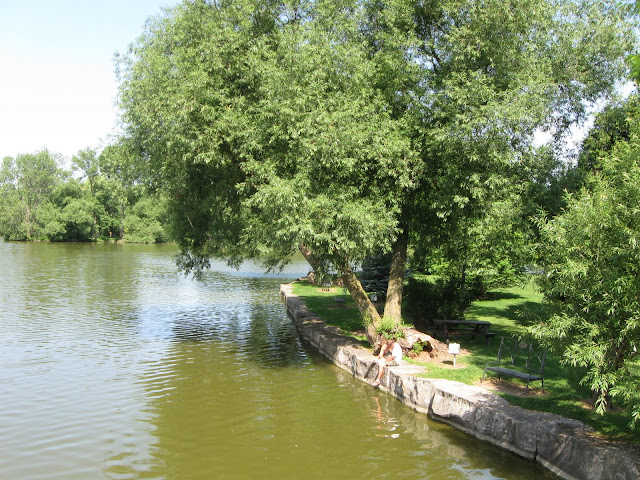 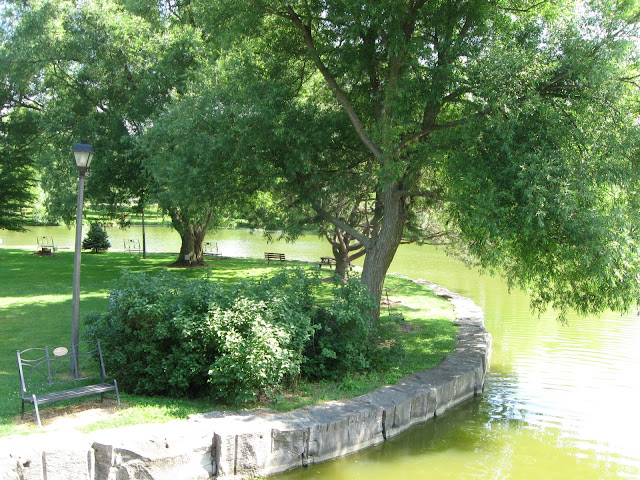 It really is a very pleasant area to stroll around. There was a cool breeze that made walking very comfortable. 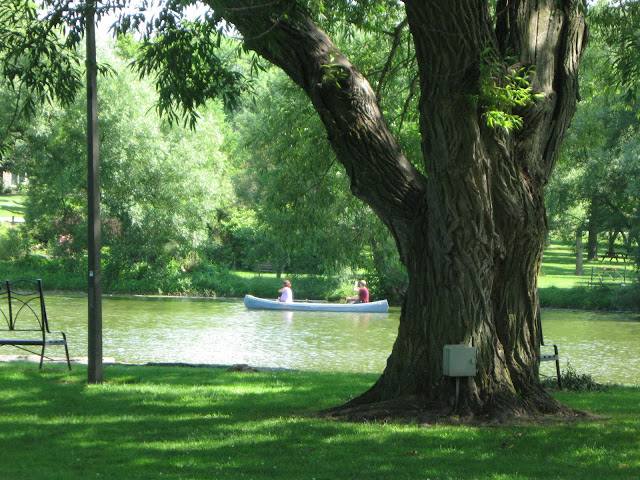 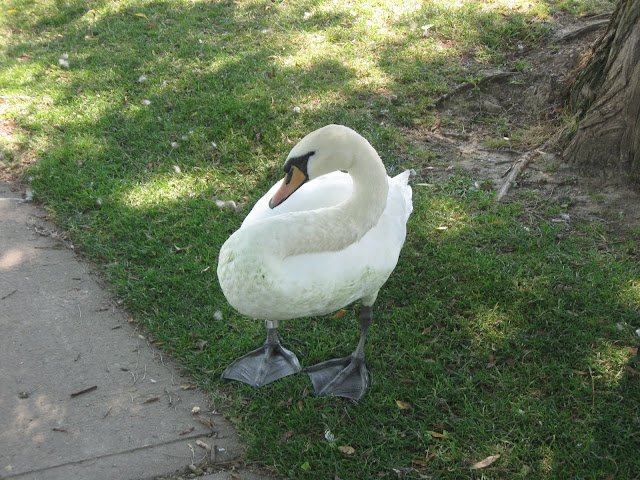 Look at the size of the feet on this swan. 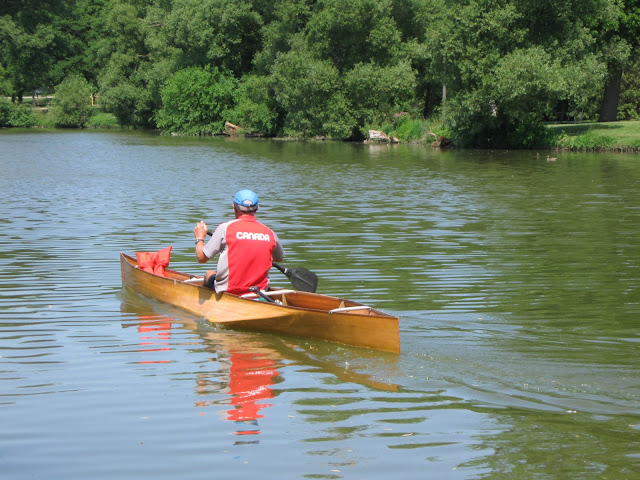 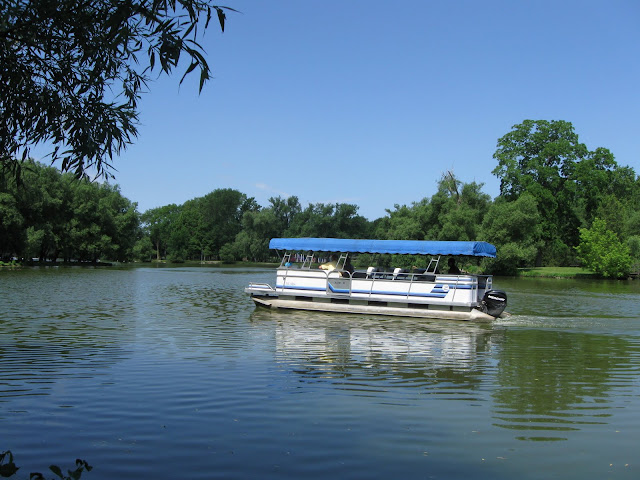 We sat for about an hour waiting for noon to come so that we could get 'rush' tickets. A bloke put his canoe in the water on the bank just opposite us and paddled off and then a tour boat arrived.

We were amused by a six inch long fish that persisted in jumping out of the water every few minutes. 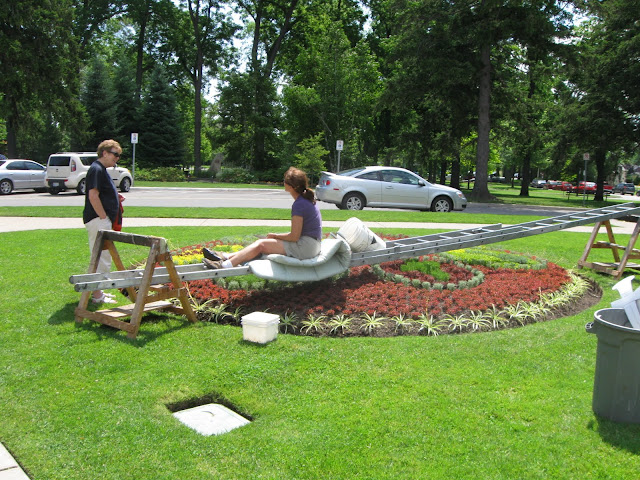 An elegant way to weed the garden. 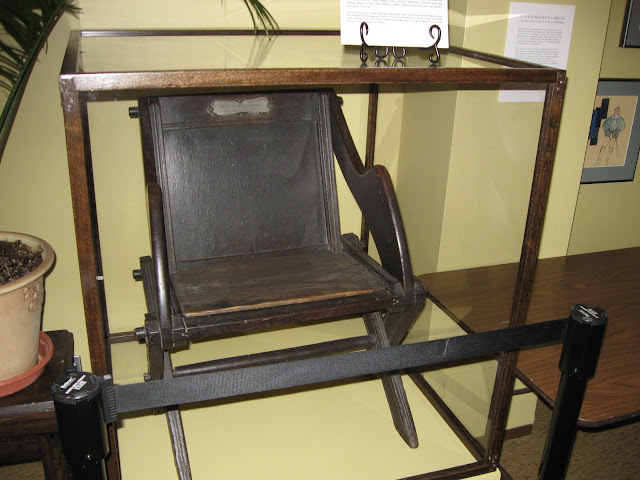 This is reputed to be Shakespeare's chair. There was no problem getting rush tickets and the service at the theatre was very friendly and professional. 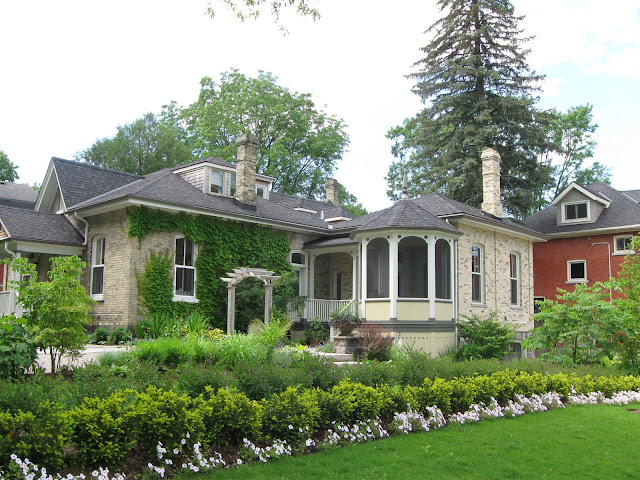 It was time for lunch so we strolled down towards the main town area through some back streets. 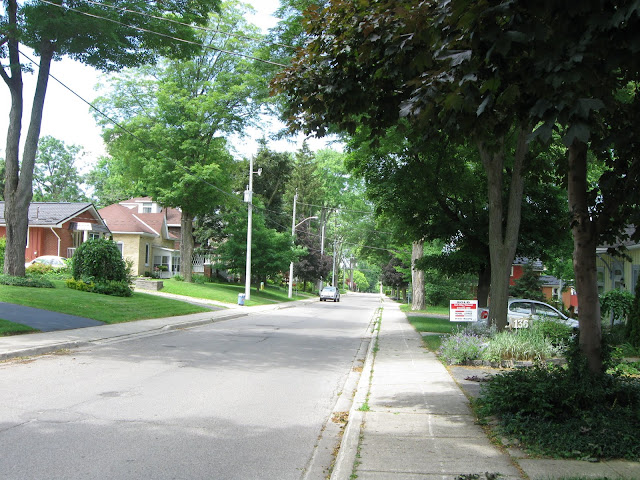 Most of the houses were relatively small and unassuming. This was after all, a railway town before the theatre arrived. 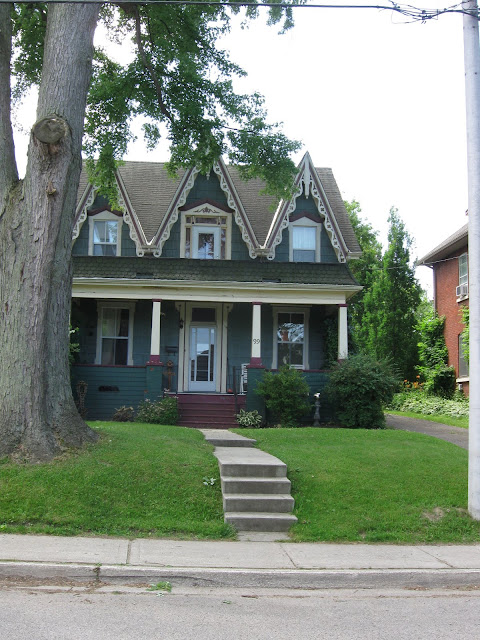 Some of the houses were more posh as you would expect and some like this one were more distinctive. 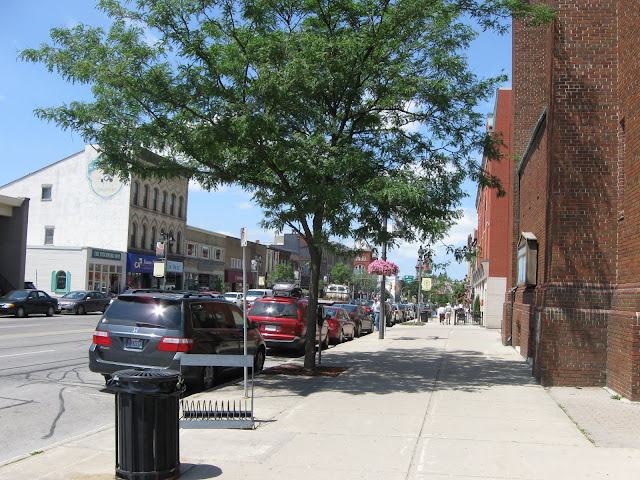 The main street was lined with what appeared to be prosperous shops and food places. Apparently over half a million people visit this town of 32,000 people each year.

They do not allow you to take photos in the theatre so you don't get to see what it is like inside. Although our seats were to the side and in the balcony,we had a good view and could hear well. They use amplification of the voices but it is quite subtle. The performance was most enjoyable and was non traditional, even to the use of electric guitars with the Shakespeare lyrics and traditional tunes done in rock music style. There was plenty of smoke and effects.

The Sir Toby Belch  (Brian Dennehy) and Sir Andrew Aguecheek (Stephen Ouimette) performances were particularly effective, as well as the Malvolio (Tom Rooney). But then again, Shakespeare gave them the best lines and action.

Interestingly, the performance was a dress rehearsal with the opening still a week away. It was well worth going to and a lot more fun than when Marianne and I went to a Shakespeare play in Stratford on Avon back in 1974.
Posted by Ray Perry at 12:10 PM