It's been a while since I have been able to update the blog for various reasons, so I plan to do a few today.

The Barossa Valley is probably Australia's most famous wine producing area and since it is just a day trip north east of Adelaide, we often go there when we are in Adelaide.

The small town of Gawler marks the entrance to the valley and so we pulled over to have a walk around town. It's quite prosperous by most Aussie small town standards and is also a bedroom community for people working in Adelaide. 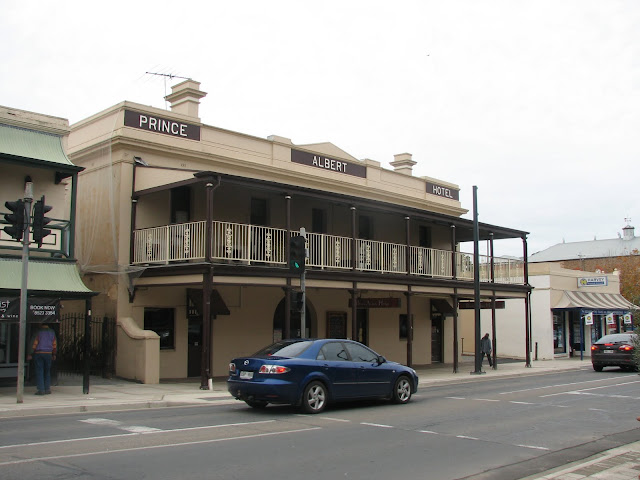 It has the usual wide street and collection of pubs. At one time in it's past, there were even tram tracks in the center of the road. 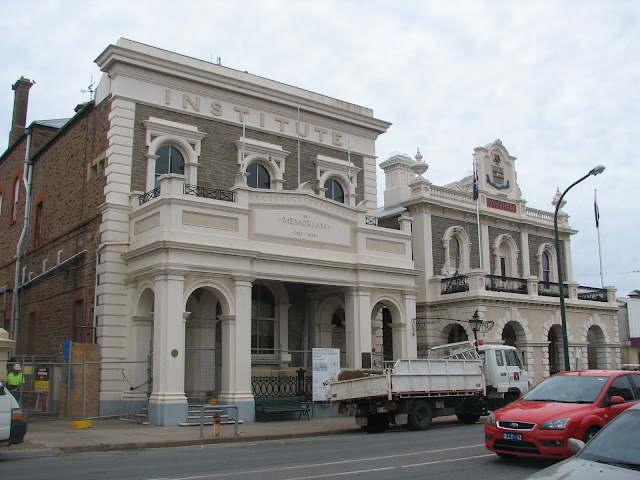 Like most country towns, Gawler has some impressive old buildings dating from the 19th century. Because the climate is dry and temperatures don't get too much below freezing, the buildings are usually in good condition. 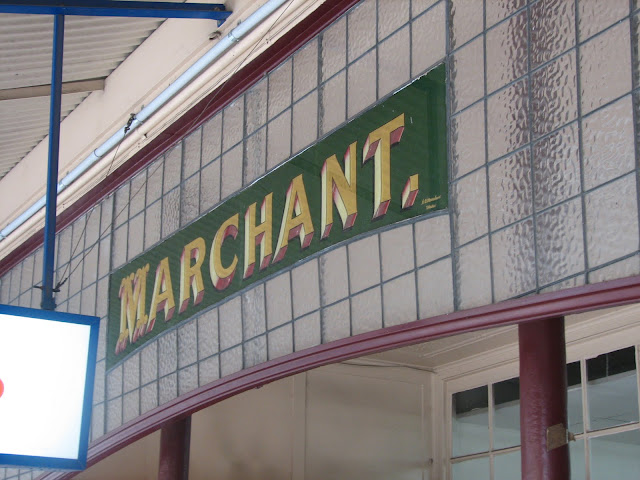 There are still some interesting old shops that still have the old elegant touches of the past. 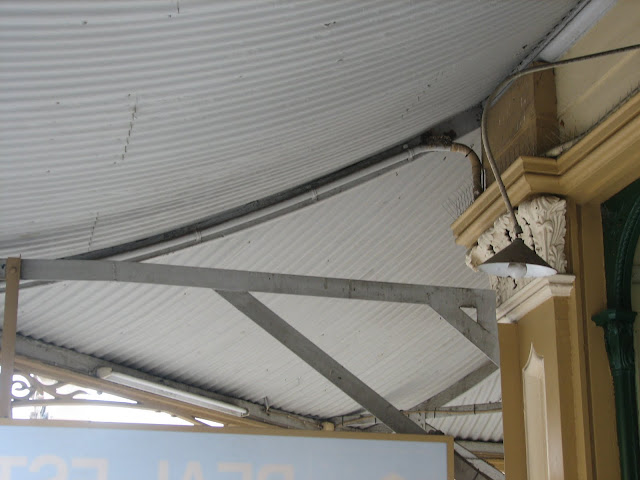 Like most towns in Australia, the shop fronts have awnings to protect shoppers from sun and rain.

One shop even had the old fashioned method of transferring money to a central cash register. This was the central point. 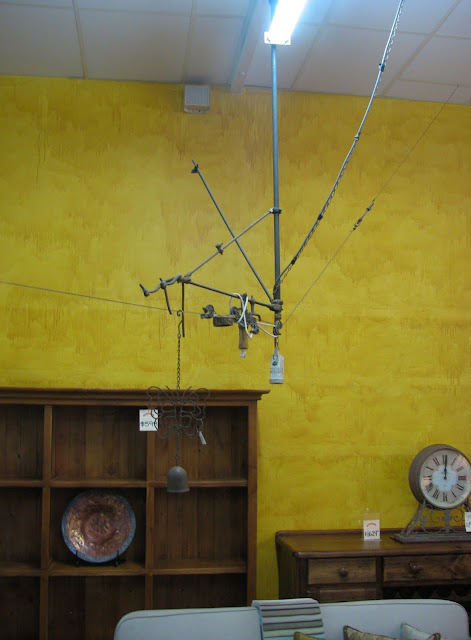 One of the satellite points. The salesman would take the money from the customer and send it off to the central point. Change and a receipt would then come back down. These devices were very common in department stores. 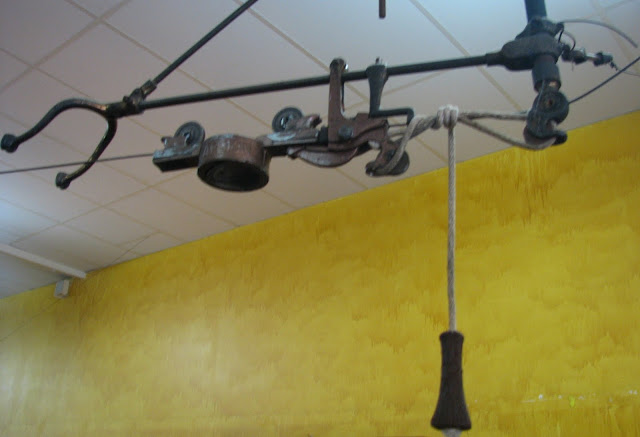 The money went into a little container that screwed into the round thing to the left of the rope. The salesman then pulled on the rope which lengthened a spring which eventually released, propelling the container up the long wire to the central point. 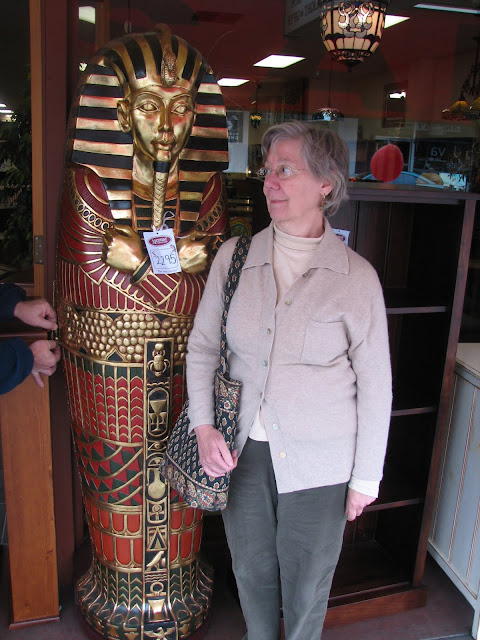 It's amazing what you can find for sale in small country towns. The object on the left of course, not the right. 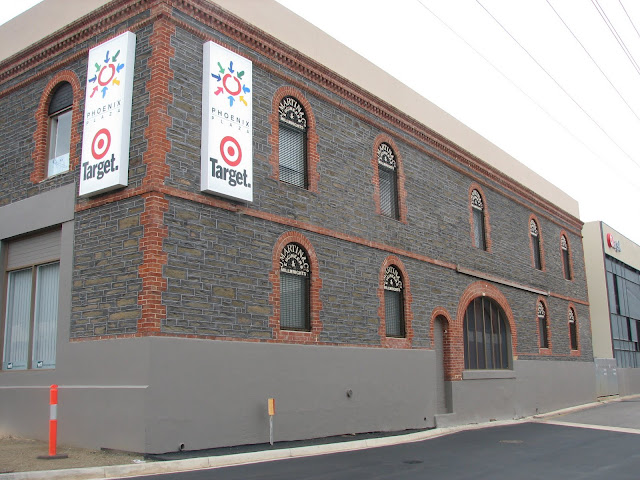 An old factory building that now houses a Target. Quite unusual. 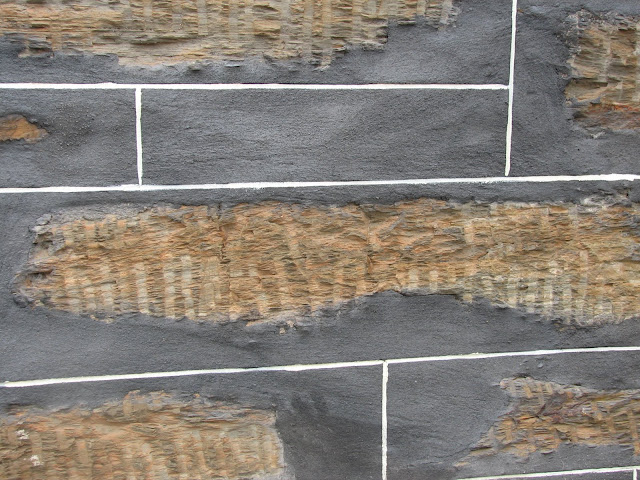 Detail of the wall stones for the Target building. 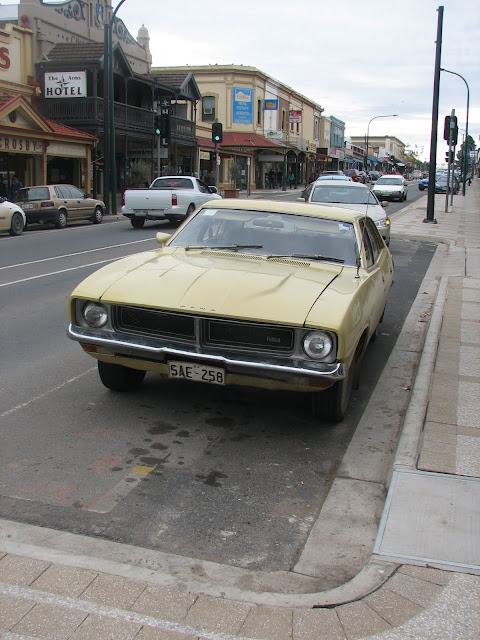 An old Ford Falcon which have always been big sellers in Australia. They were loosely based on the American versions, but substantially beefed up to allow for the lousy roads and off road conditions where they would be used. There are lots of older cars running around on the roads because rust is not a problem. Roads are never salted and most of the country has low humidity. 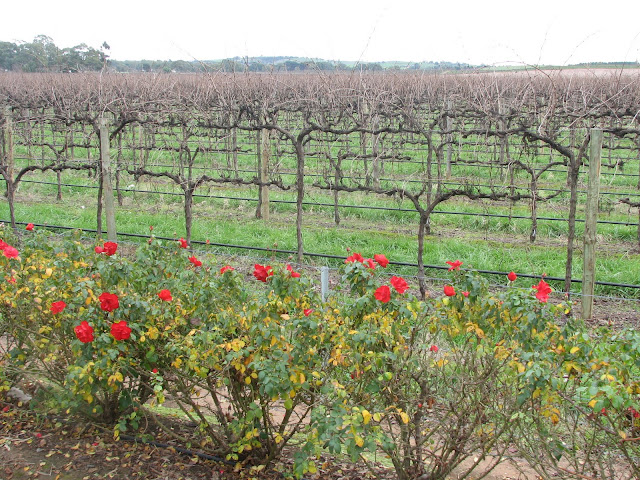 Wine country. The roses actually have a practical use in that any diseases hit them first before the vines. Note the double layer branches which we had not seen much before. 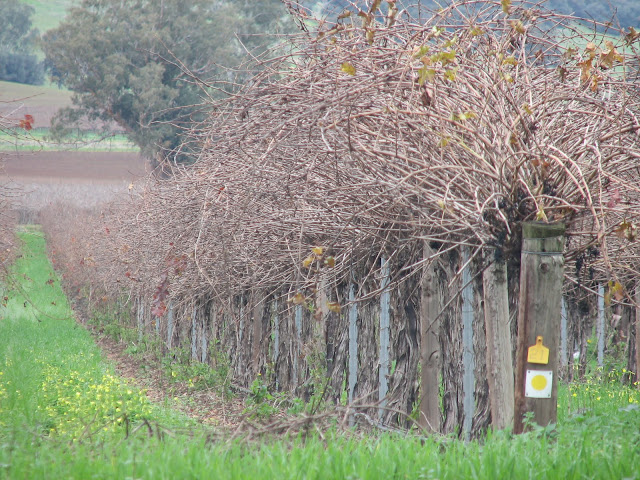 Vines waiting for pruning in the Aussie winter. It reminds me of my beard when I haven't trimmed it in a while. 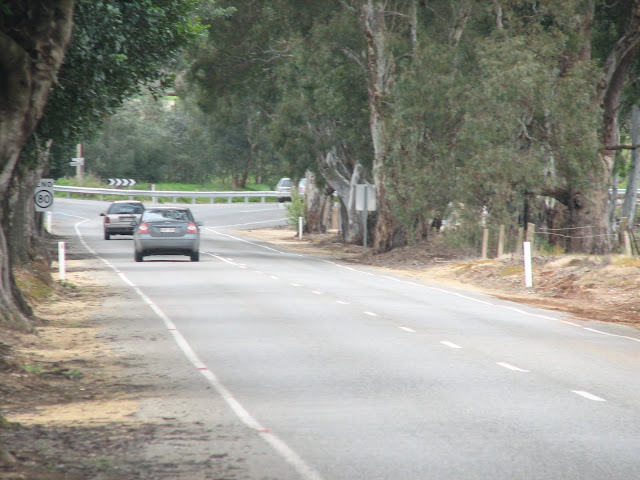 On most week days, the road is pretty quiet. The weekends are busy as people drive up from Adelaide. 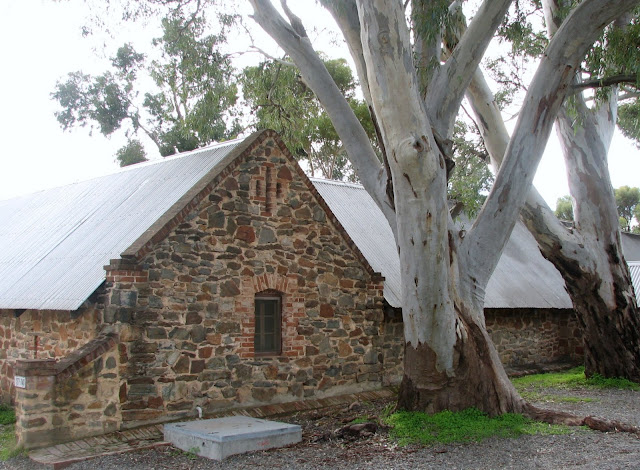 The biggest problem in visiting the wineries is deciding where to go. We've visited quite a few over the years, but we really do like Rockford Wines. 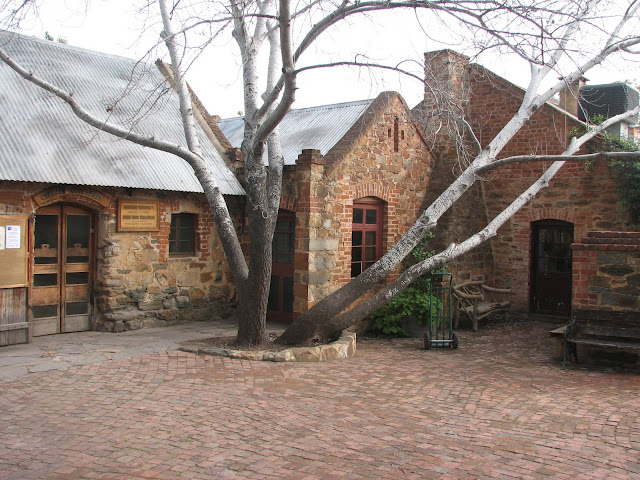 It's a small winery and the owner basically refurbished the old existing buildings. It's definitely not one of those chateau style fancy wineries that make you wonder whether you are paying for the wine or the fancy buildings. 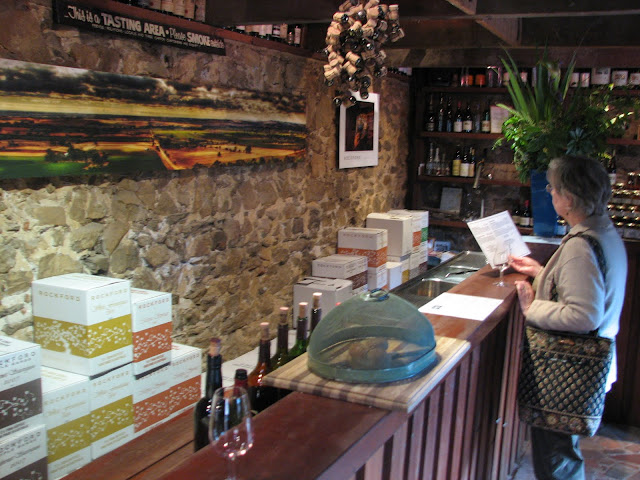 The small tasting room. Note the unusual wine cork sculpture above the counter. 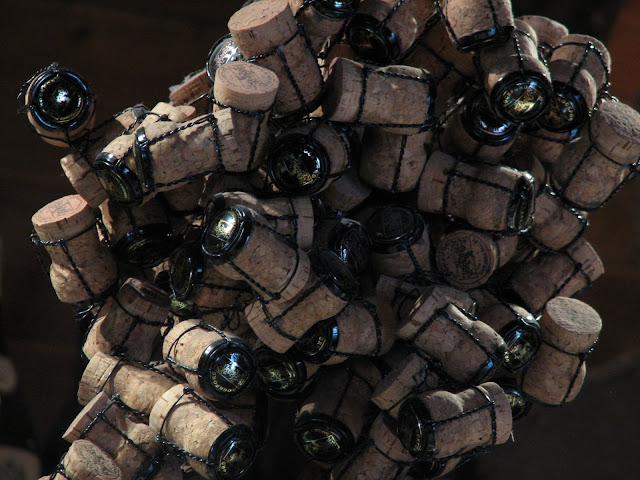 Detail of the cork sculpture. 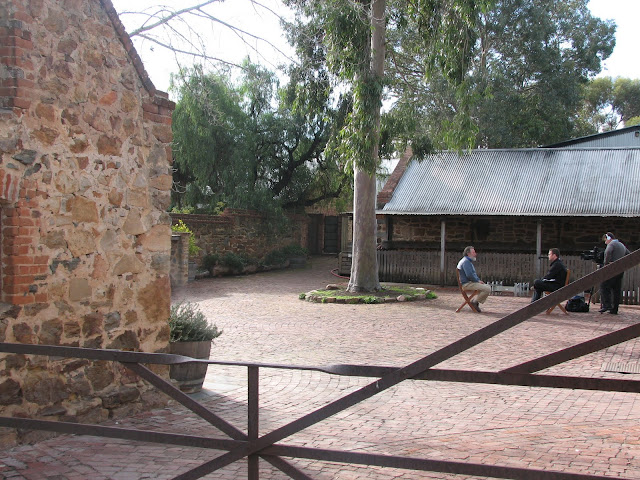 The owner being interviewed. This winery produces some of Australia's best wines and some of the fruit comes from very old vines. If you see their wine, you can buy it with confidence, though some of the wines can be pricey. 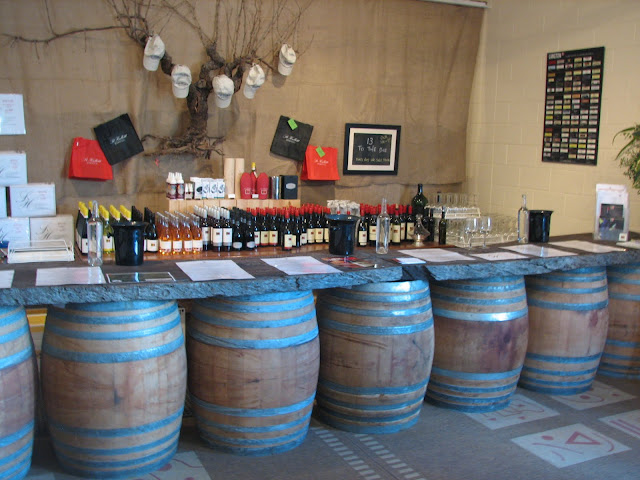 The next day we returned and went to St Hallet's which is just down the road from Rockfords. They don't have quite the reputation of Rockfords, but I quite enjoyed most of their wines. They also have a block of old shiraz vines and the fruit goes into their best wine. 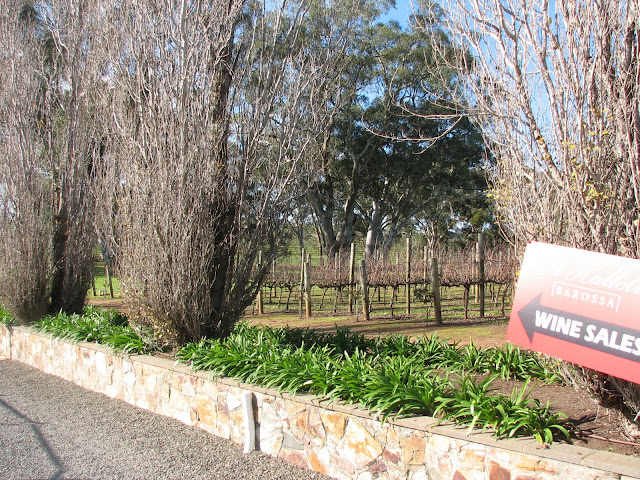 Vines at St Hallets. In case you are wondering why we visited wineries on different days, it is because of the possibility of being stopped for a random breath test. Penalties are severe. Each winery offers quite a few wines to taste, so the driver needs to limit the samples and only take a small sip of each wine. I dumped more wine than I drank. 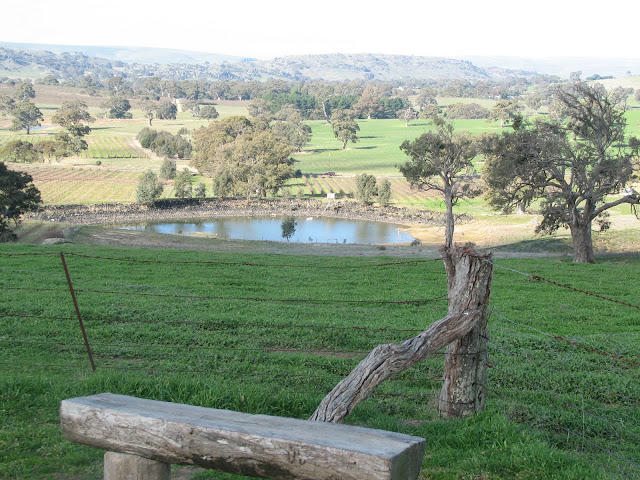 The next valley over from the Barossa Valley is the Eden Valley. It's significantly higher that the Barossa and very suitable for growing the Riesling grape. In winter this area is green, but in summer, it is quite brown.