Albury and Wodonga are adjoining cities that stradle the NSW / Victoria border. We have a friend in Wodonga who we like to visit so he was happy to host me at his house for a night. I could have taken the XPT from Melbourne at 8:30 am that would have got me into Albury at 11:47am. However it was more convenient that day for my friend to pick me up at the new station in Wodonga in the afternoon so I chose a V/Line train that left at noon to get in at 3:45pm.


View Larger Map
V/Line runs the regional trains in Victoria, but their fares are not covered by the Ausrail Pass. A second class ticket was $27 and first class $33 so I shoved the boat out a bit and came up with the extra $6. Occasionally I am totally extravagant like this. 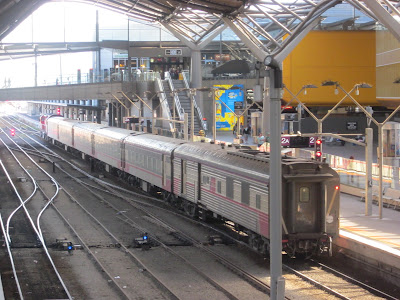 The V/Line train that was to take me from Melbourne to Wodonga.

At one time, the most famous train in Australia, the Spirit of Progress, ran from Melbourne to Albury. If you are not familiar with the train, click on the link to see what it looked like. It used the wide gauge track that was standard in Victoria.

My father worked for the Queensland Government Railways and received a pass each year that allowed the family to travel either free or inexpensively throughout Australia. One year we managed to travel on the Spirit. We were greatly excited of course and we were not disappointed by the standards of the compartments in the carriage.

In 1962, it was replaced as the premier service by the Southern Aurora that used the new standard gauge track from Melbourne to Albury and continued on all the way to Sydney. It was an overnight train and I managed to ride on it a couple of times.

The descendants of these trains are the XPTs that are used for a daytime journey and an overnight journey in each direction. 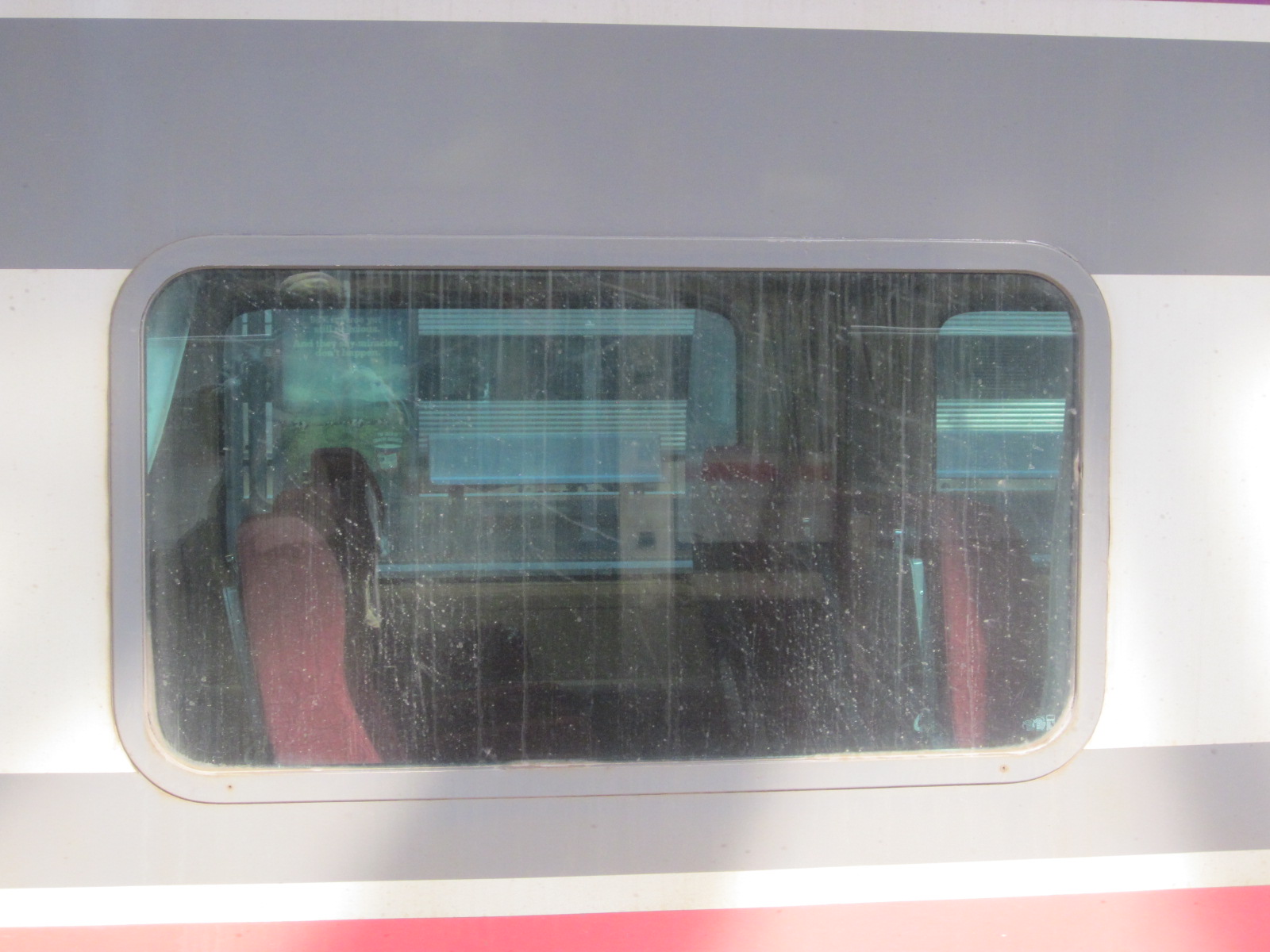 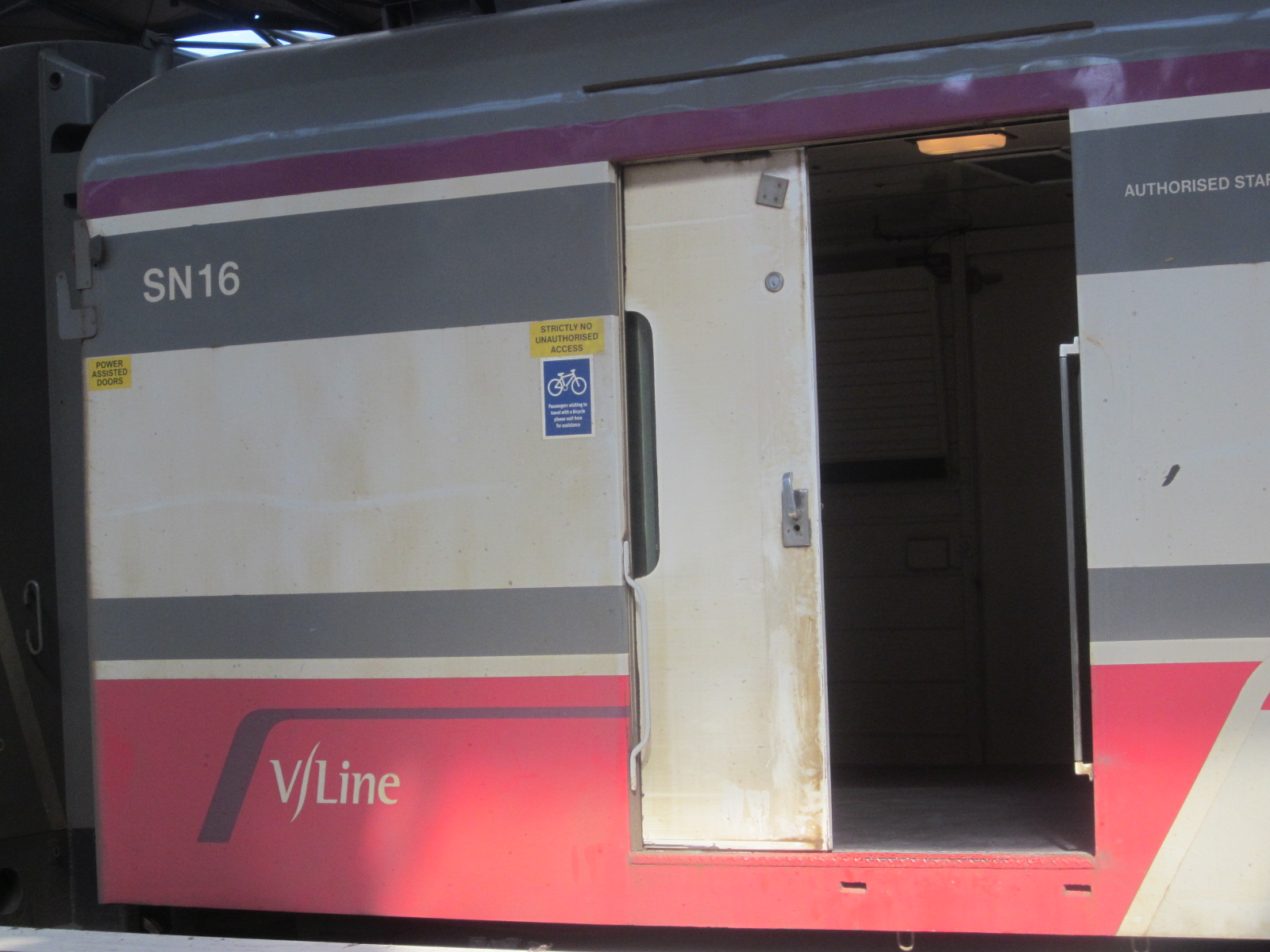 Unfortunately, the outsides of all the carriages were really grubby. The windows were not cleaned either. I looked up V/Line's Mission on their web site:

To provide value for our customers and community by delivering safe, reliable, accessible and sustainable passenger and rail freight transport services.

Cleanliness was not mentioned, so I suppose they think grubby is ok. 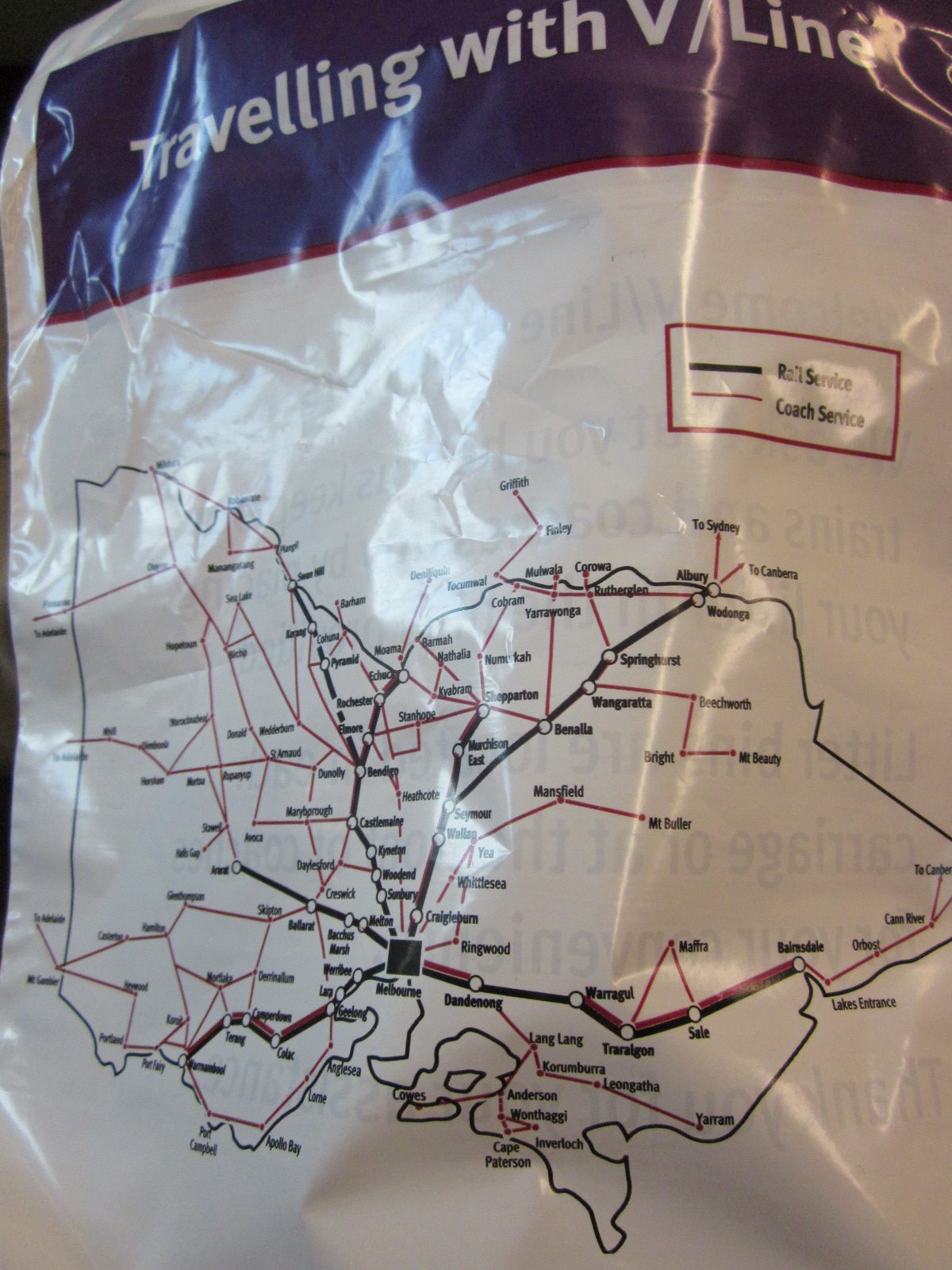 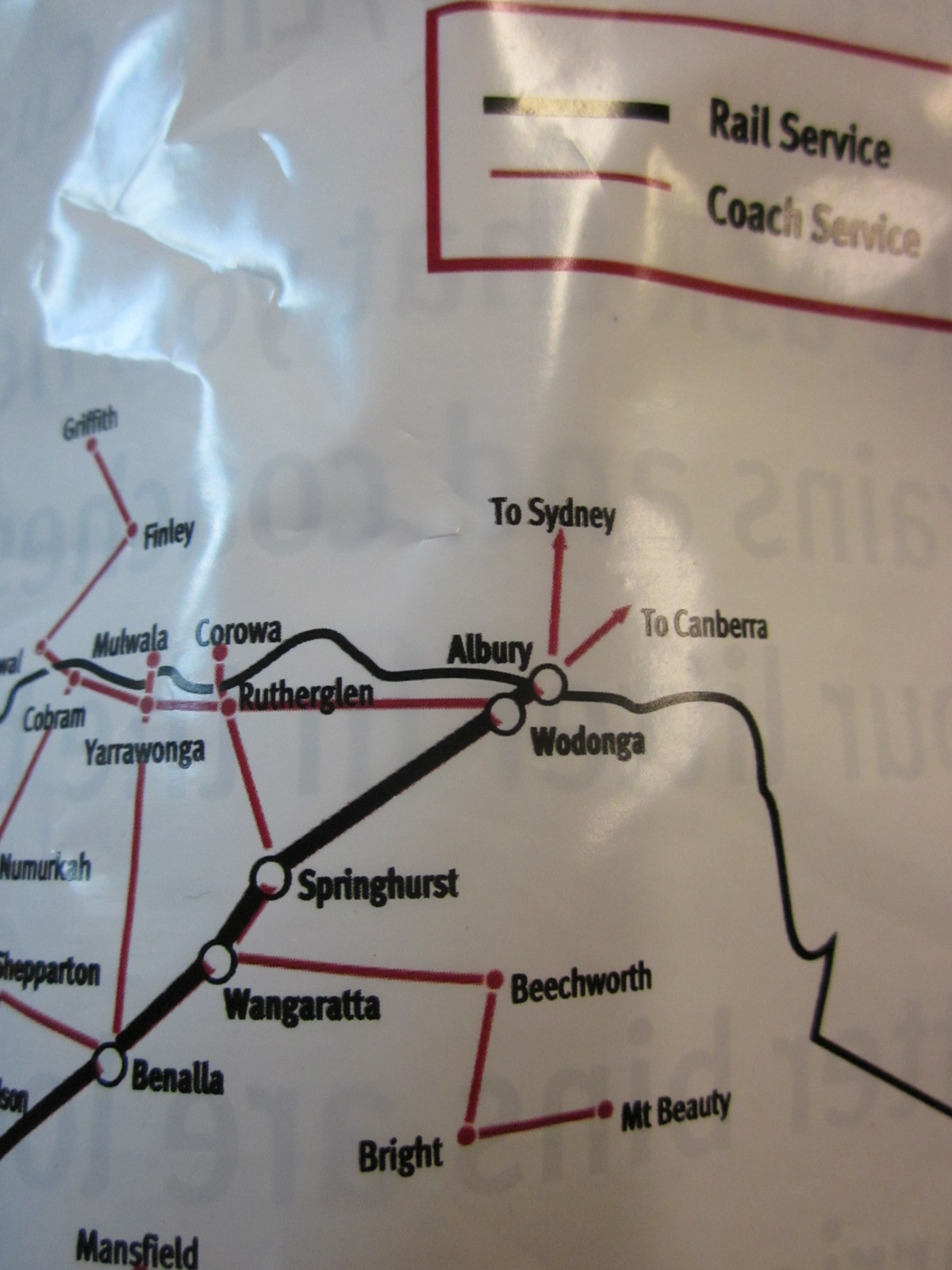 Each seat is issued with a small rubbish bag made of plastic that showed the V/Line network. The train lines are in heavy black. The red lines show bus services that connect with the trains. Years ago, these were trains but have been replaced by buses. In the second photo you can see Albury and Wodonga in the north east corner. 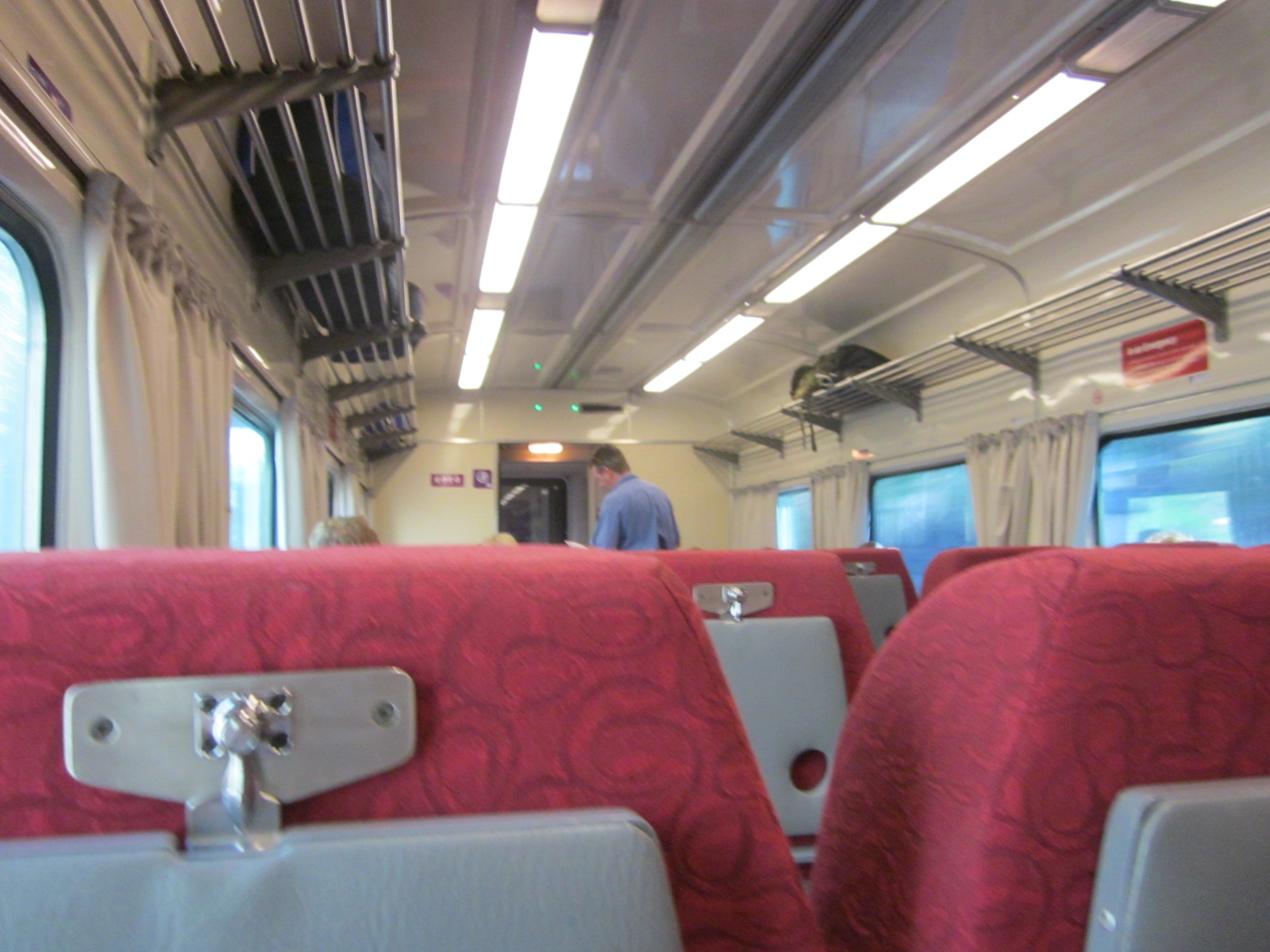 Thankfully, the insides of the carriage were quite clean and the seats were comfortable. 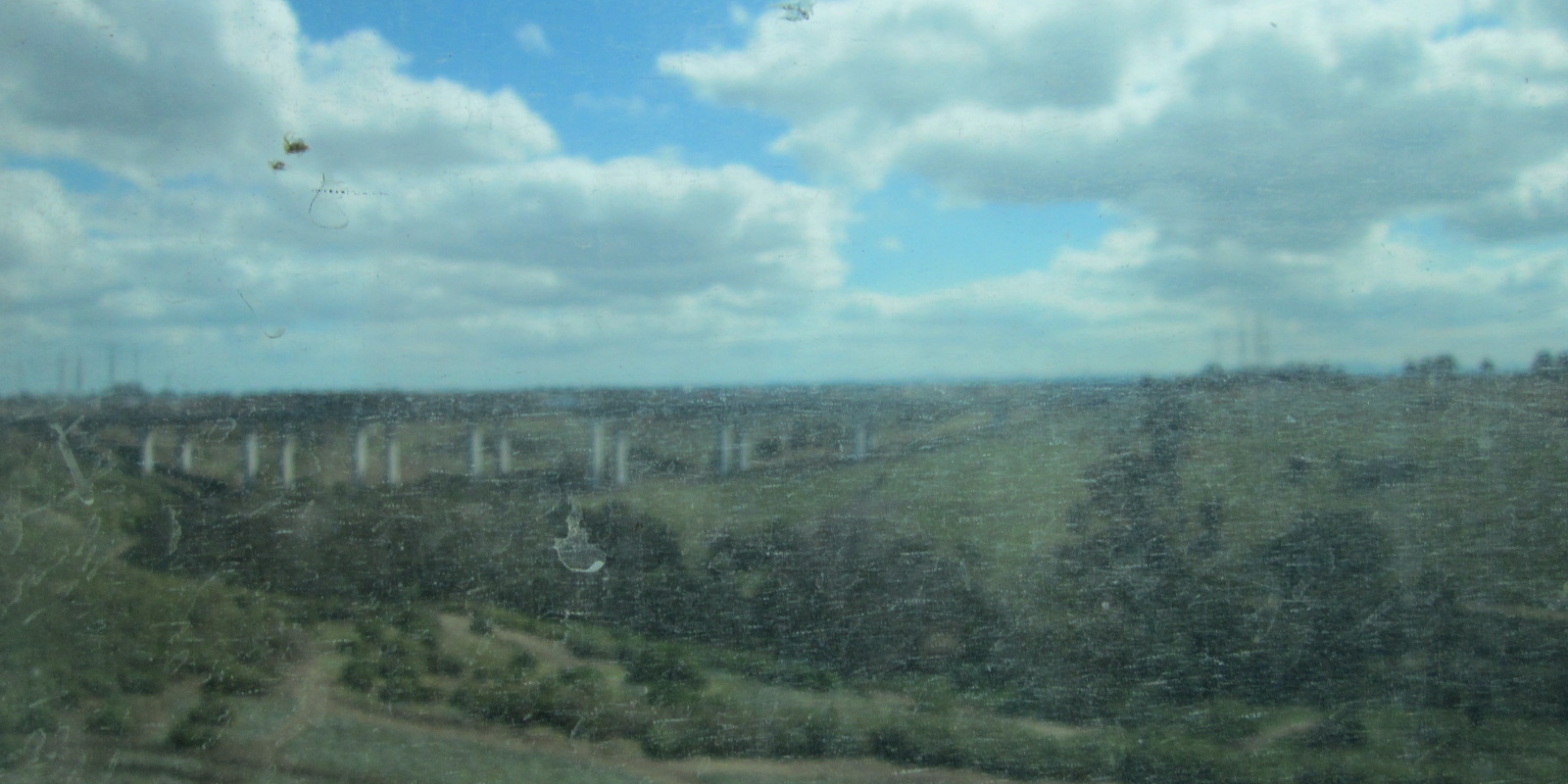 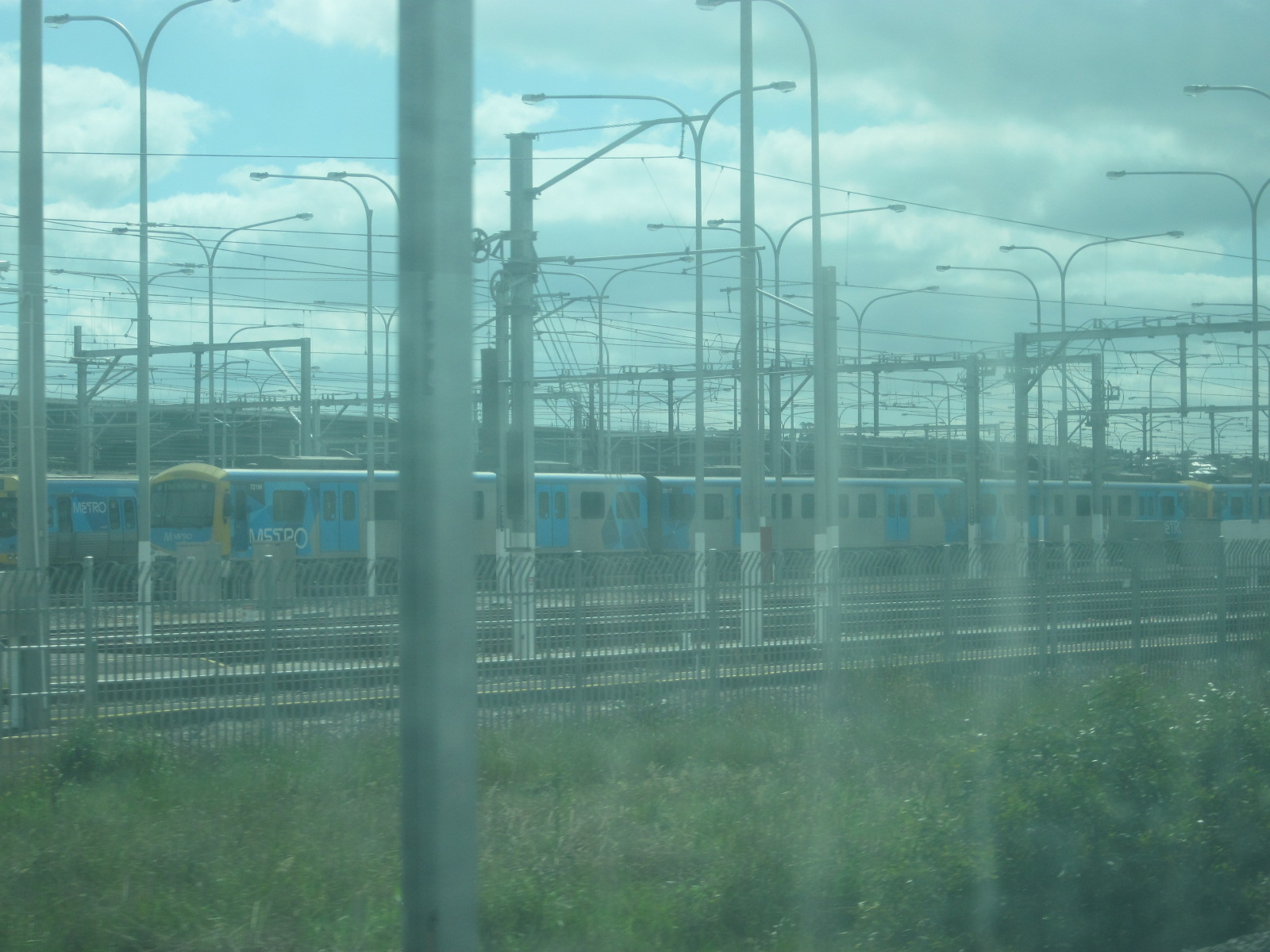 A forest of poles. 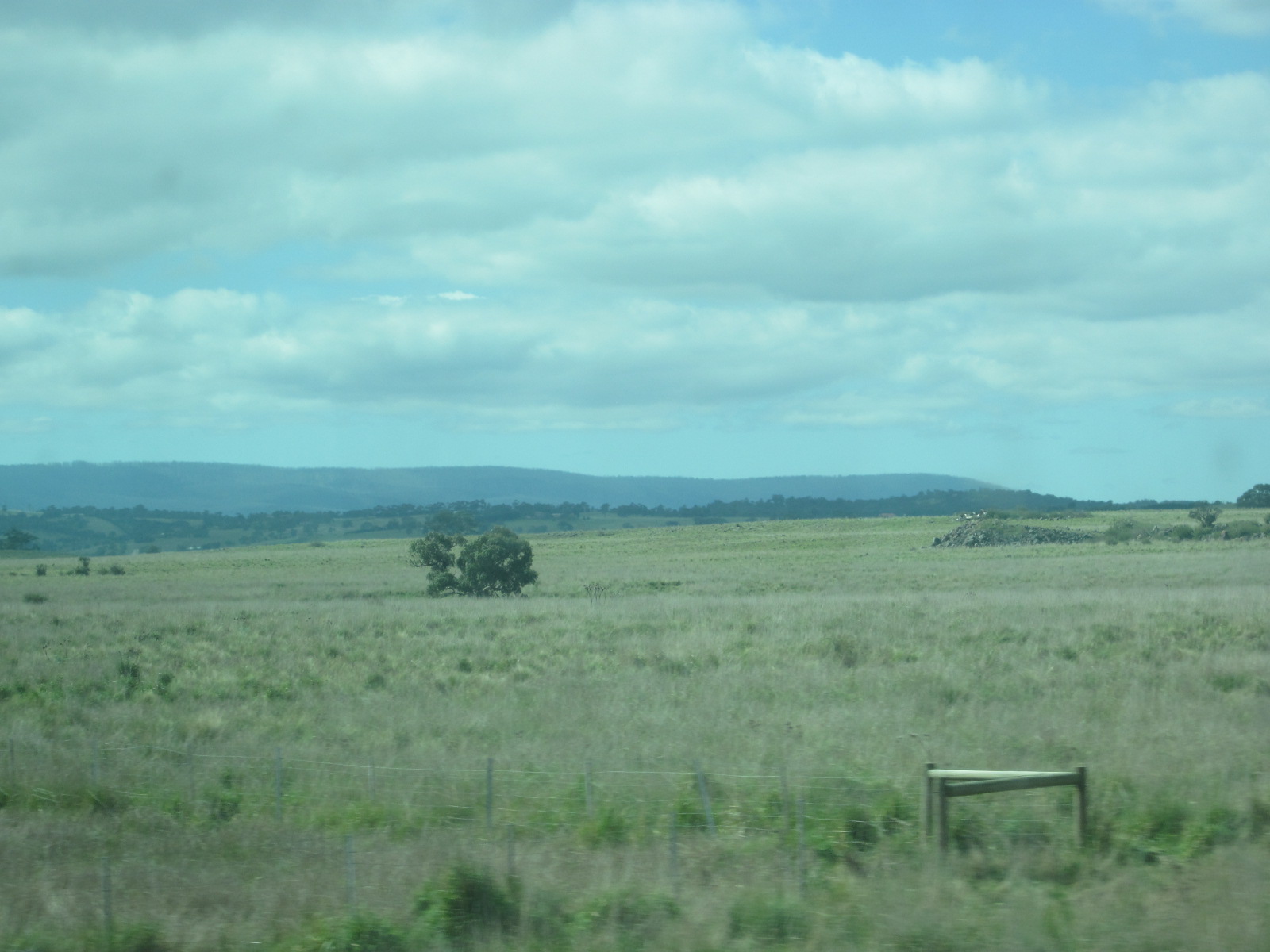 Finally out into the countryside. Victoria is essentially divided into two halves, east and west. The eastern half is quite hilly with numerous mountains. The train line runs on the flat area just to the west of these hills and mountains. It was this flat plain that allowed the Spirit of Progress to go so fast by Australian standards. 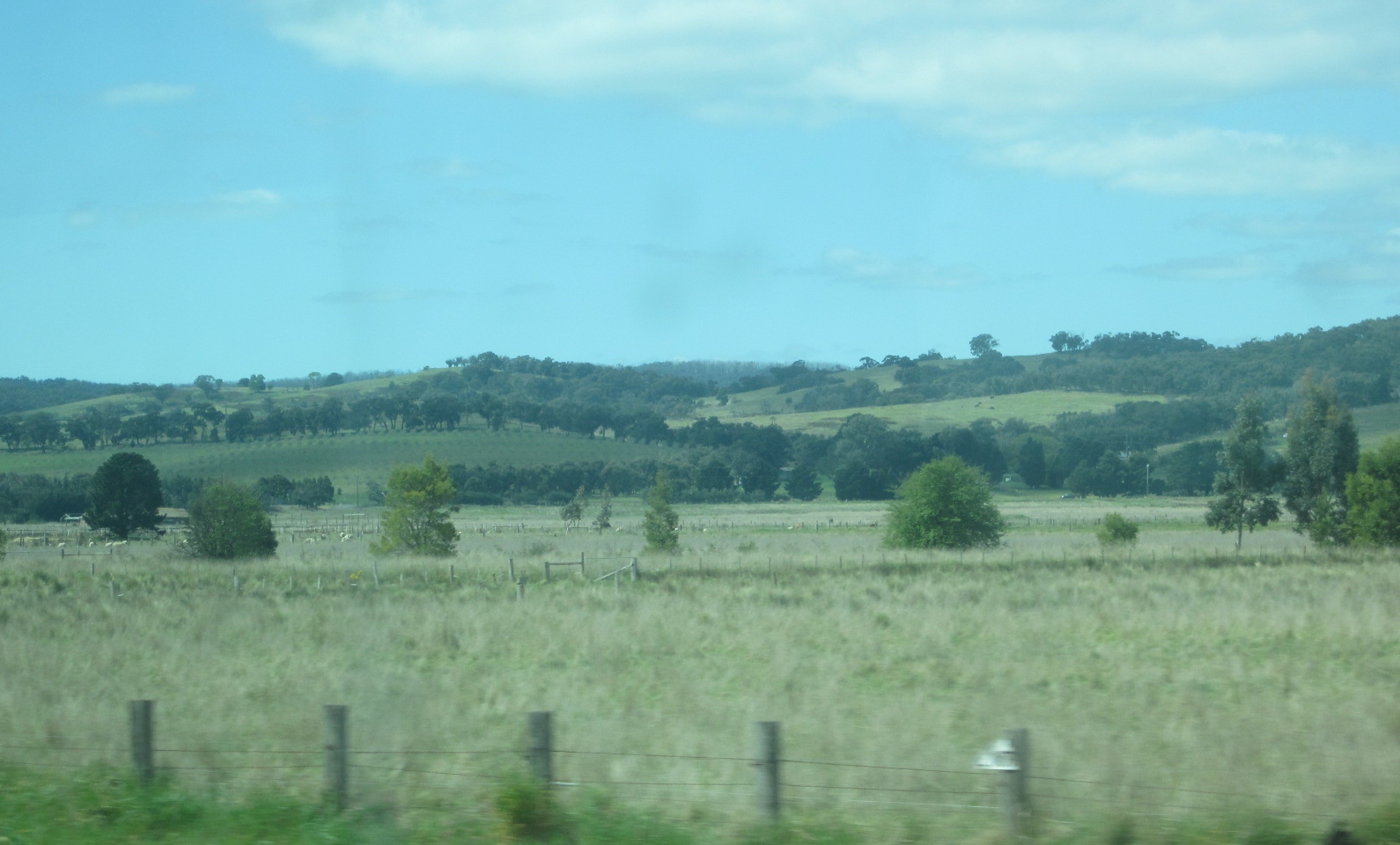 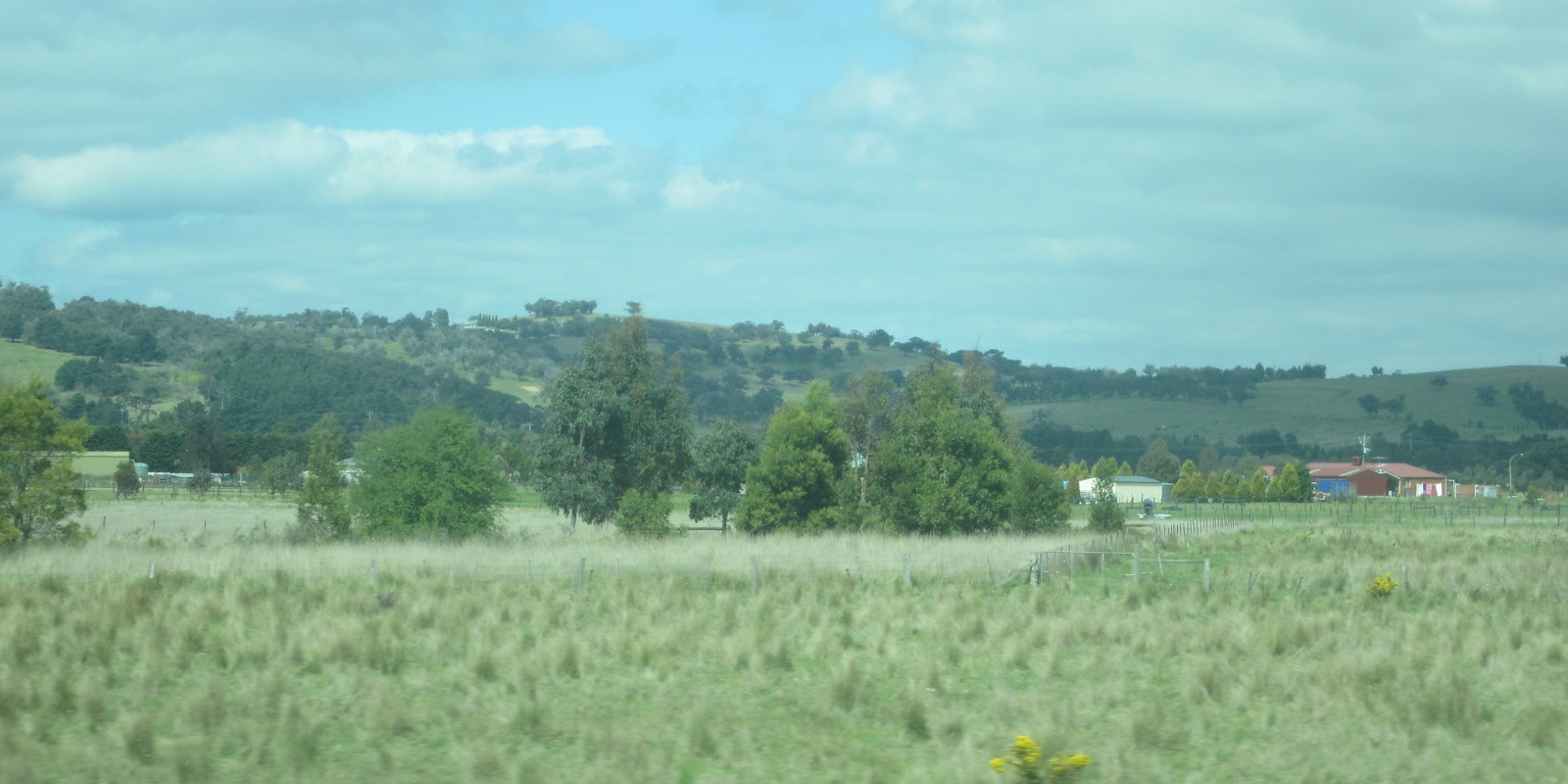 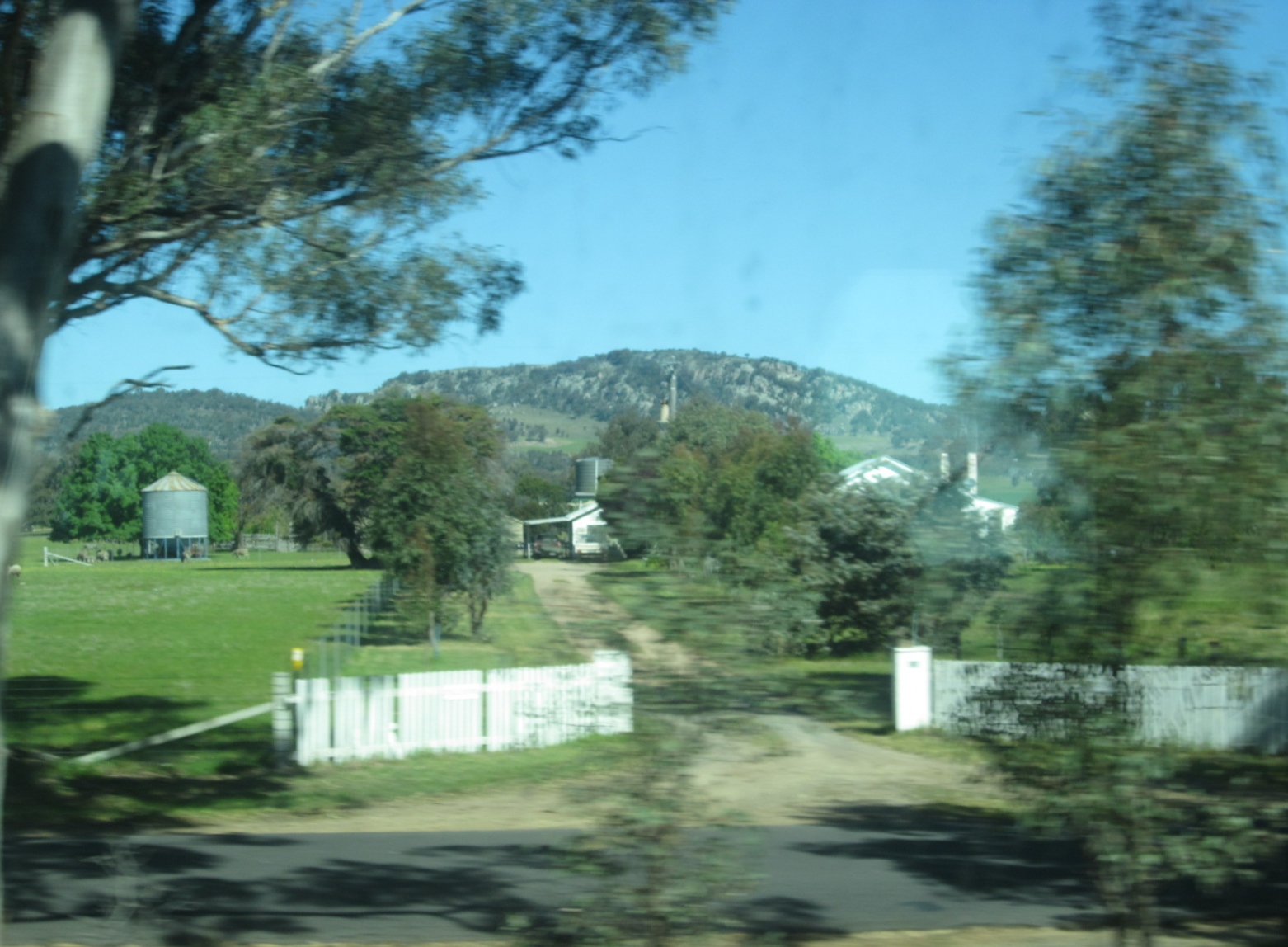 The recent rains over the past couple of years has made the vegetation quite green. However in summer, the heat will turn the green to brown. 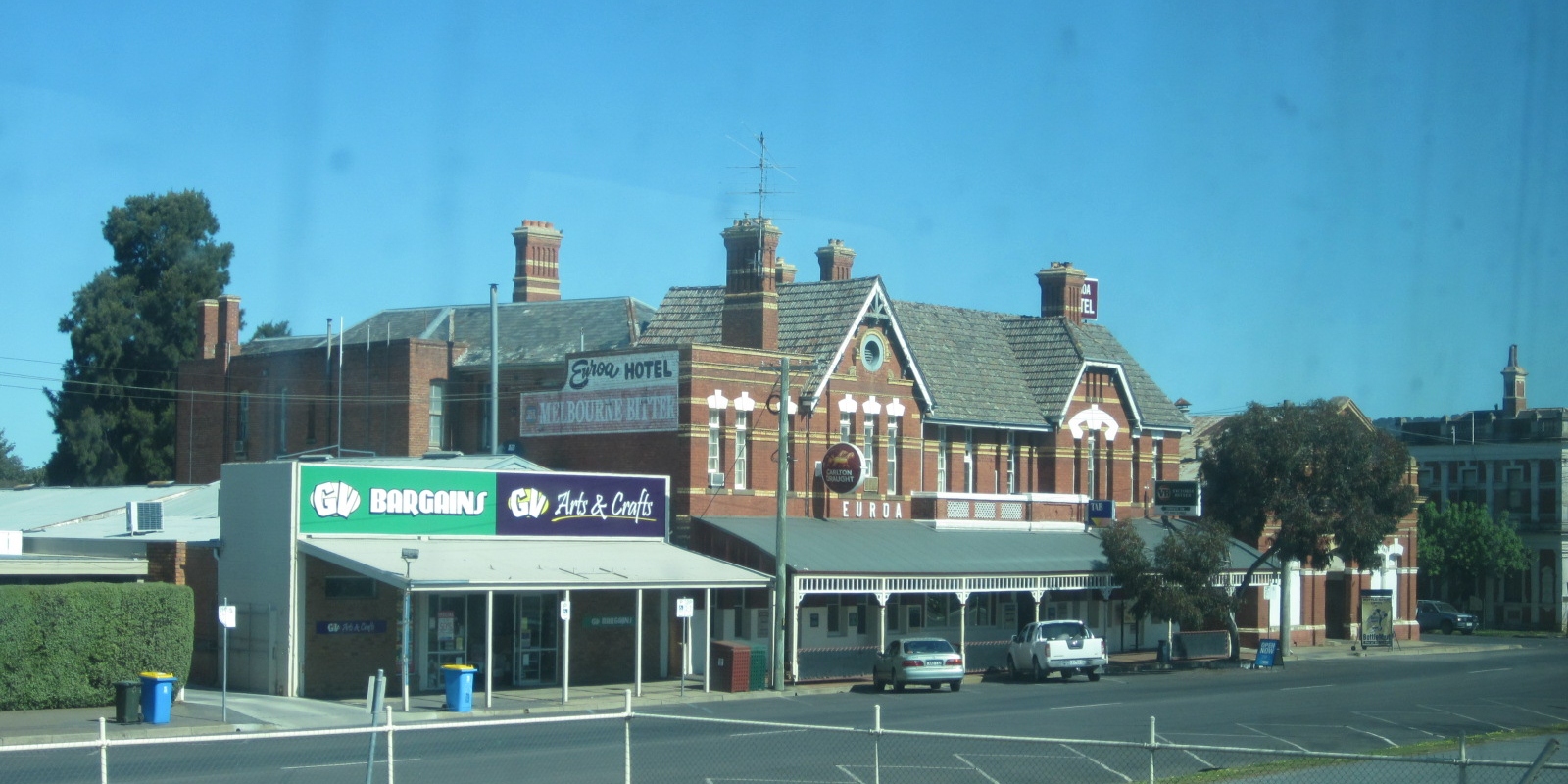 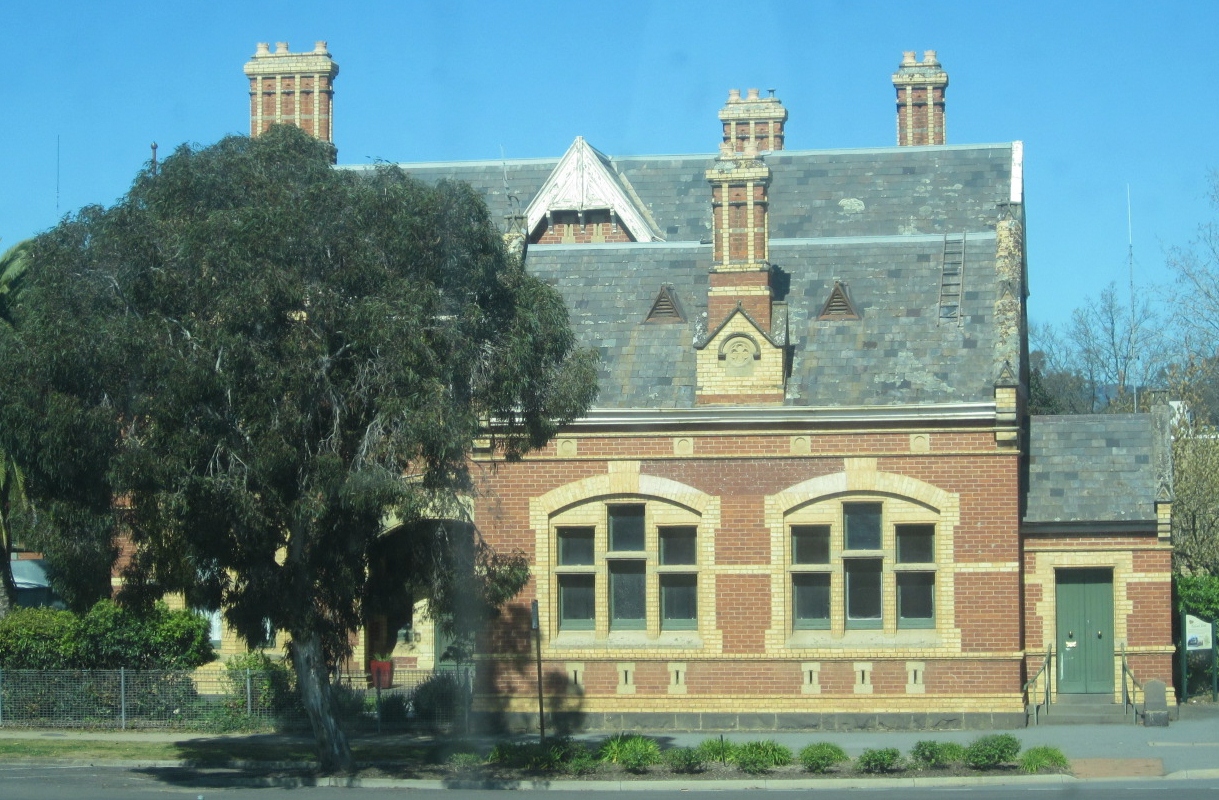 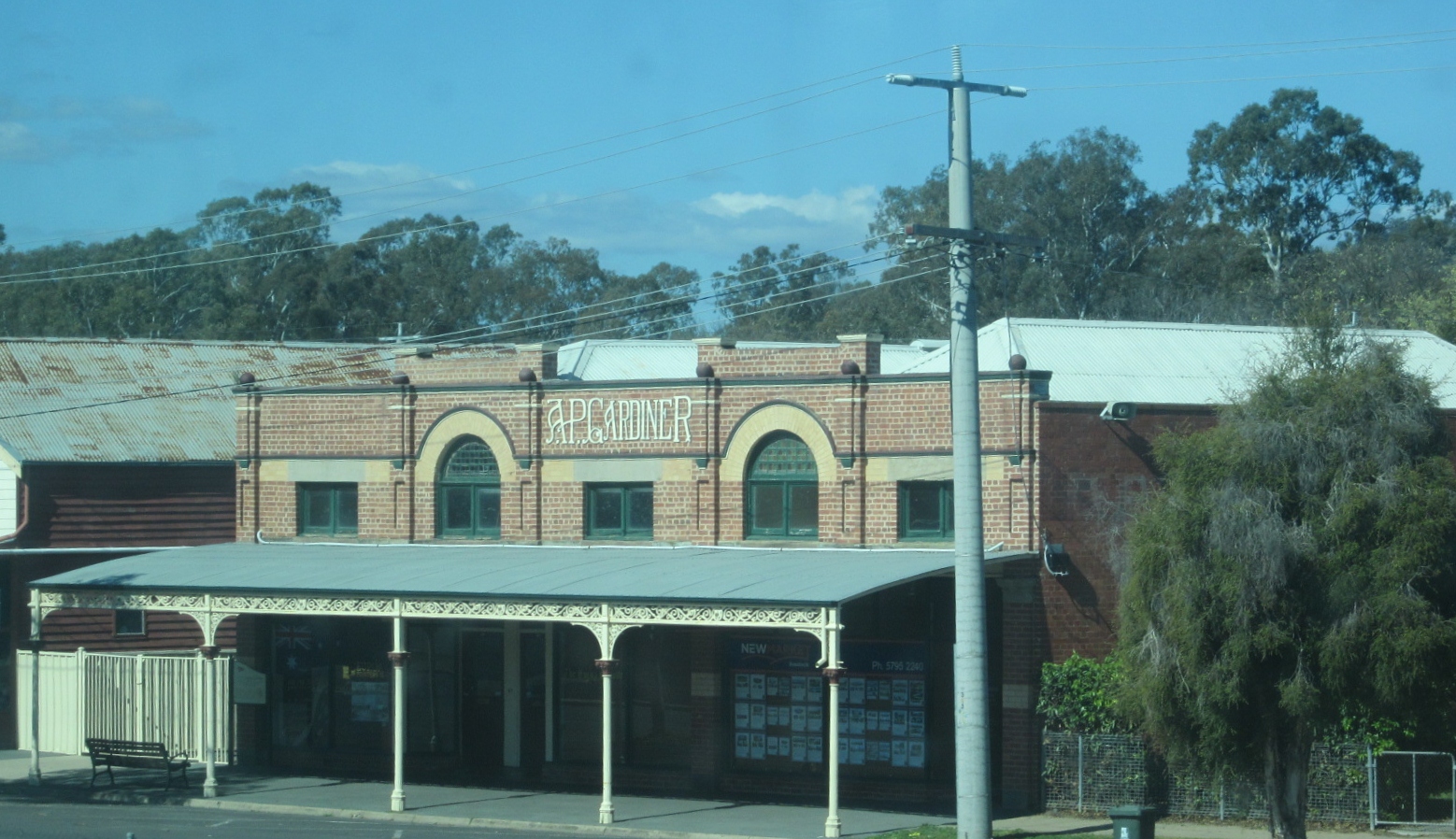 Most Victorian country towns have some interesting old buildings. Although it can get down below freezing and well above 100 degrees (37 c) buildings in Oz, these old buildings stand up to the temperature swings very well. 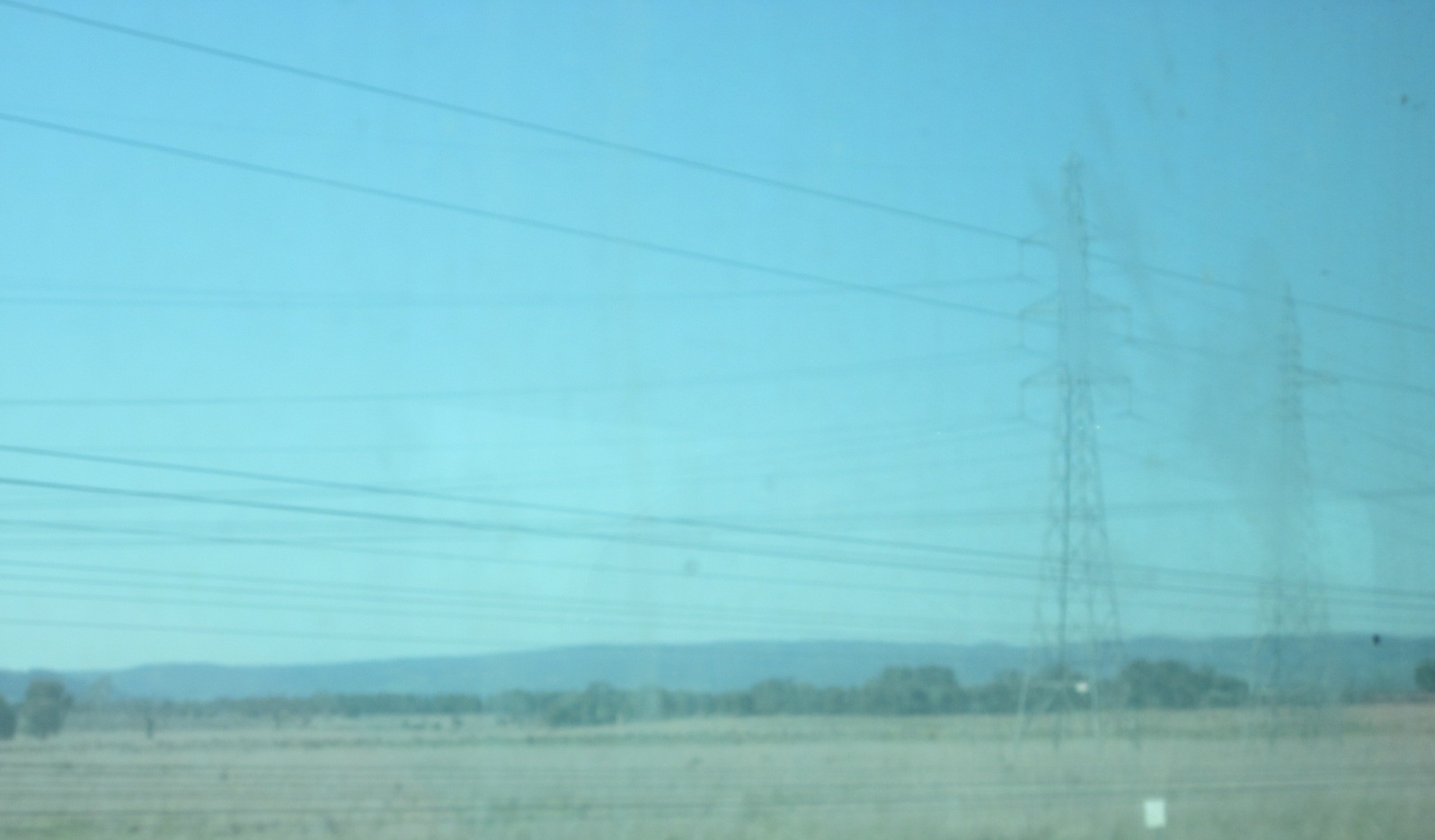 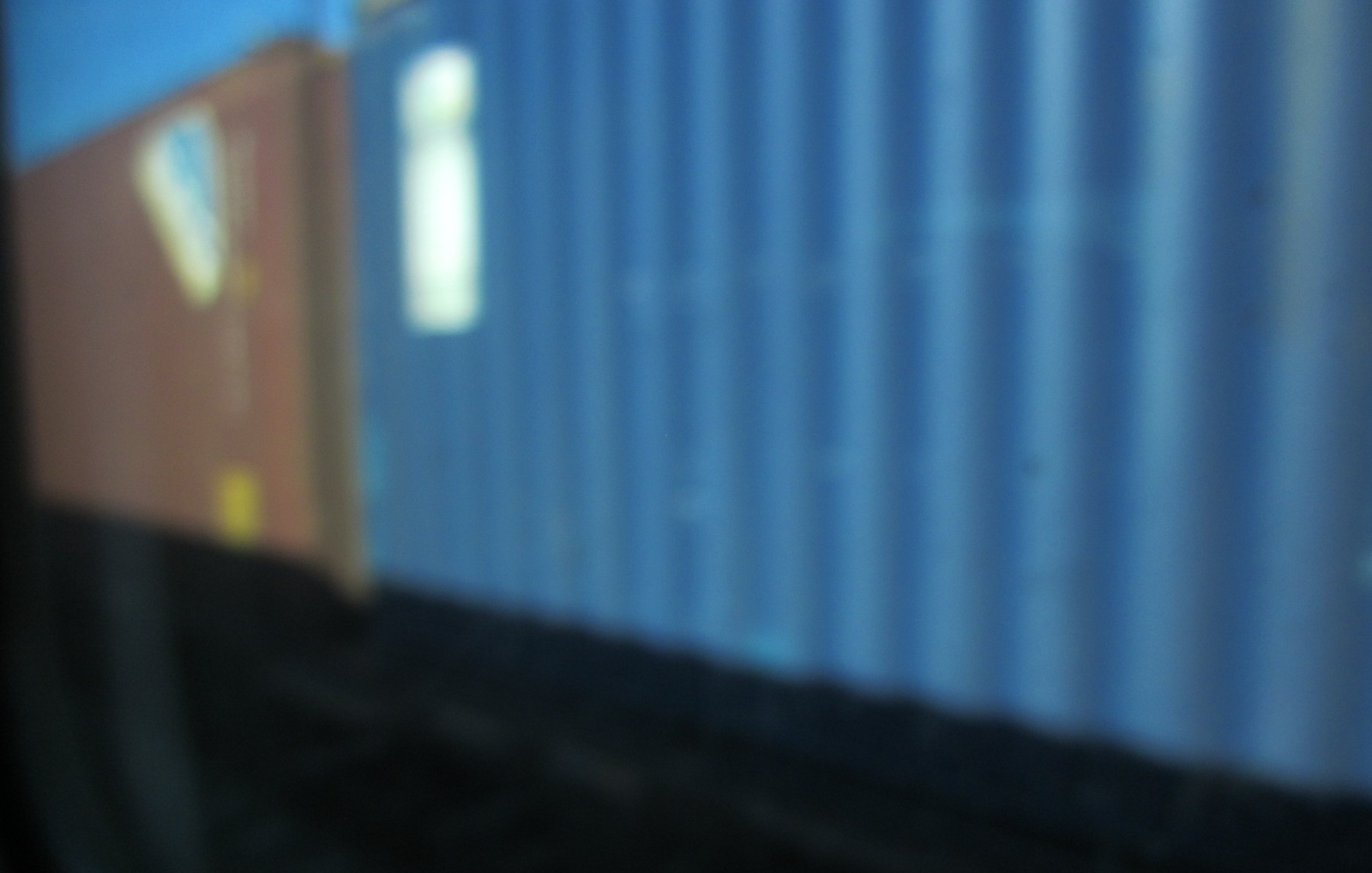 It's Murphy's law. I was all ready to get some photos of Glenrowan and suddenly a freight train came through. Fortunately, it made an interesting photo. 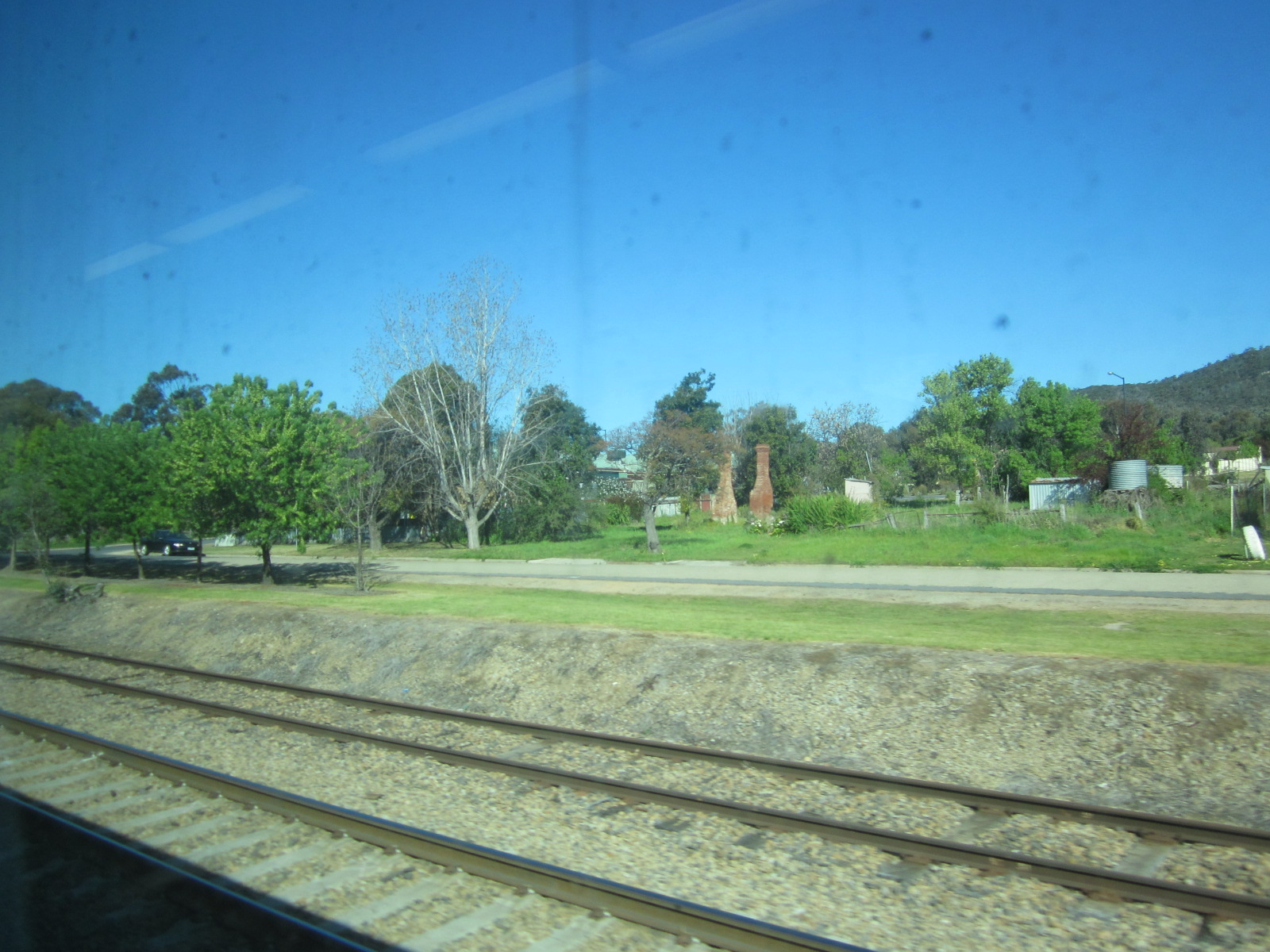 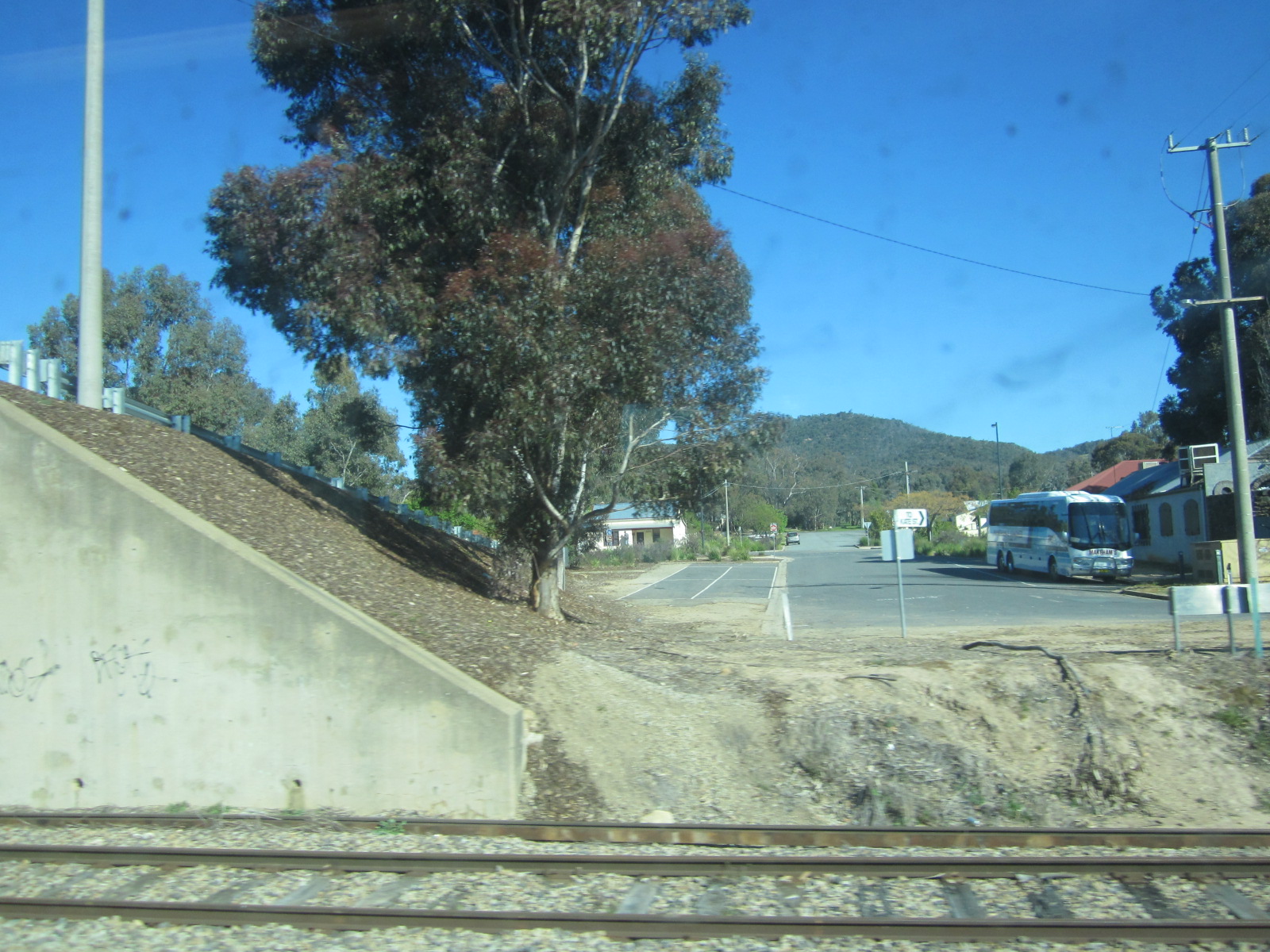 The freight train passed before we got to Glenrowan but there really was not much to see from the train anyhow. A short while later, we arrived at Wodonga about thirty minutes late where my friend was waiting to whisk me away in his car.

I'm somewhat ambivalent about the journey. The scenery is pretty good by Australian standards but the magic is not there when it comes to the train itself. Dirty windows don't help.