As many of you know, I try to go back to Australia every year. This year's trip in unusual because I will be doing a lot of train travel. I have purchased an Ausrail pass that allows me unlimited travel on all of the major Aussie trains and I intend to go on most of them except for the Indian Pacific that runs from Sydney to Perth.

Many of the trains only run two or three times a week so it was similar to completing a jigsaw puzzle to get the itinerary put together. 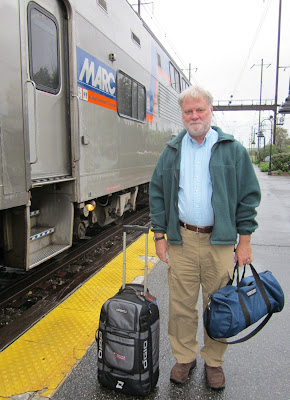 Your intrepid traveler with his stuff for almost six weeks of travel. 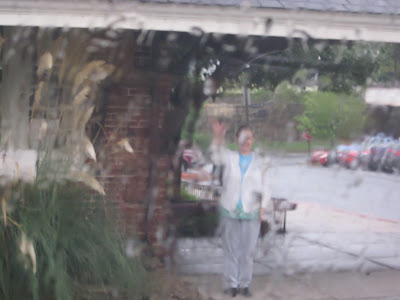 Marianne waving goodbye. In a weeks time, she will be flying to Sydney where she will stay for two weeks. 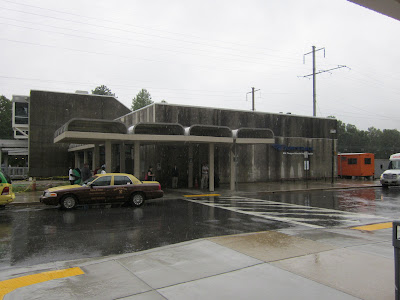 I took the MARC train down to BWI airport (cost $11). It amused me to think that the fastest train I would probably travel on during the entire trip would be this commuter train. 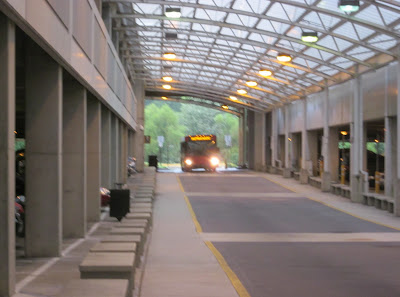 The transfer bus (free) to take me over to the airport. As I was approaching the bus stop, there was already a bus waiting there. When I got within about 10 yards of the bus, he closed his door and drove off. Another couple who were just a couple of yards behind me were distinctly unimpressed. The driver could not have missed seeing us. No doubt it really made his day. The driver on the approaching bus was much more friendly. 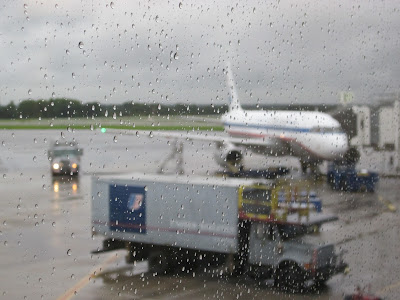 The United flight was fine. Service was fine. When I got to LAX and walked to the gate for my Qantas plane, I knew I was at the right gate by listening to the Queensland accents. It's the women who I can pick as Queenslanders. 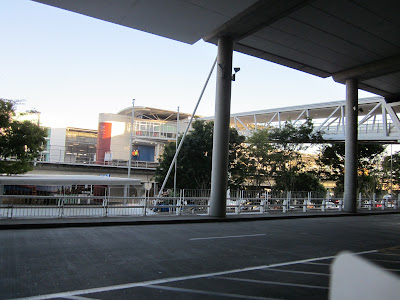 Brisbane airport at 6:30 in the morning. Clear blue sky, temperature about 60. Just gorgeous.

Qantas was pretty good. Service was great, attendants were friendly and helpful and the food was good.  Although I did not have an aisle or window seat and was in the middle, the seat next to me was empty and on the other side was a woman from Darwin who told me a bit about living through the 1974 cyclone. I got more sleep on the plane than usual.

All Aussie passports have an embedded chip. Australian Immigration has a new setup called Smartgate where you can put your passport in a special scanner similar to one of the new check-in machines that the airlines use. You then walk over to a special gate where you stand and the machine scans your face and matches your face against the photo in your passport. Once it is satisfied it gives you a special ticket and you use that as your authority to exit the area. I was through immigration within two minutes. Of course I then had to wait at the carousel for my bag, but this was a huge improvement.

US Immigration has instituted their own version of this electronic entry called Global Entry. However they want $100 per person from you and you have to go to the nearest airport for an interview. Now the people on the committee that thought this was a good idea really should be fired. Immediately! 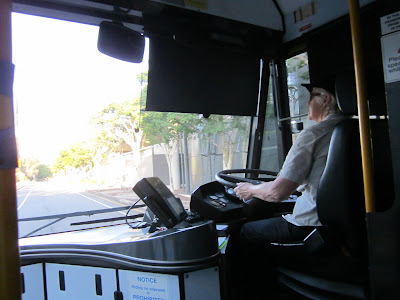 Since the International terminal is a mile or so away from the domestic terminal in Brisbane a free transfer bus takes you from one terminal to the other. The woman driving the bus had to be at least 70 years old. She did not close the doors and drive off when somebody came at the last moment. 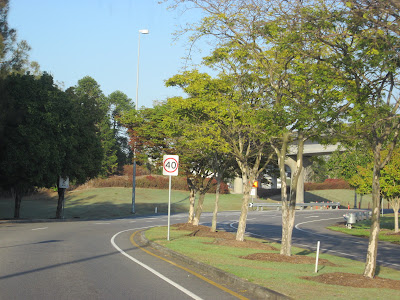 The drive over to the Domestic terminal on a tree lined road. 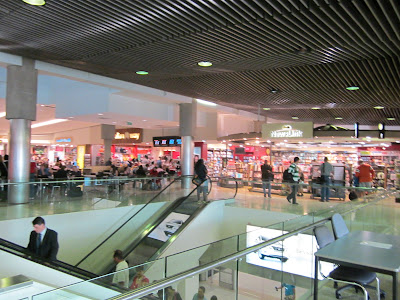 No this is not a shopping mall. It is the domestic terminal. 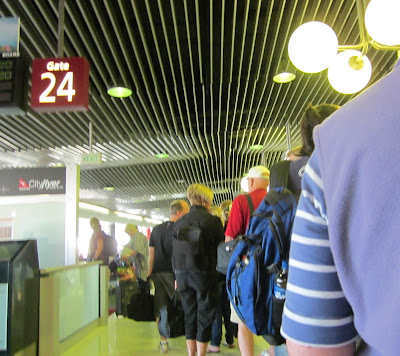 People lined up in orderly fashion to get on the plane. 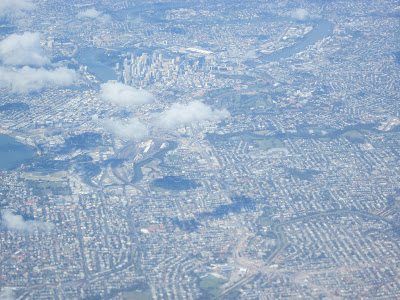 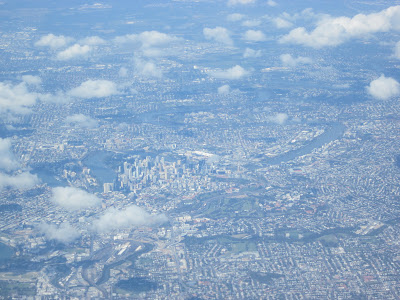 Brisbane from the air. 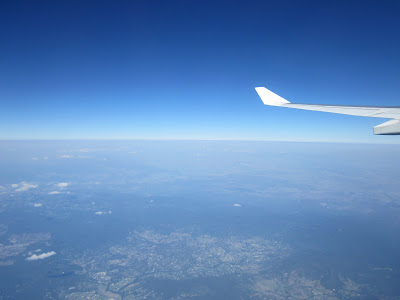 Although on the ground, the sky usually appears to be crystal clear, in Australia there is often a scummy brown layer that the planes fly just above. 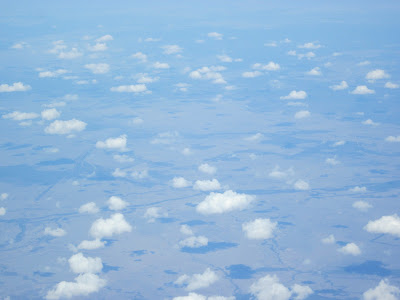 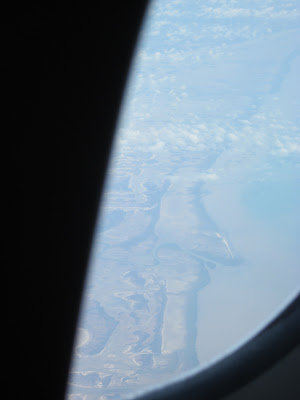 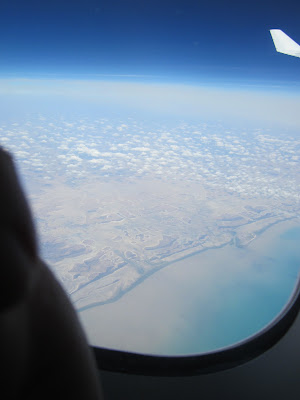 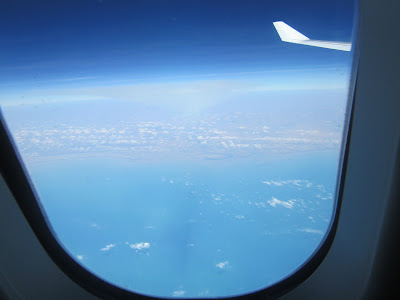 The three photos above show the coast of the Gulf of Carpentaria. The plane flew along the southern edge and it was really interesting to see this virtually uninhabited coastline stretch on and on. The water in the gulf was a beautiful turquoise. 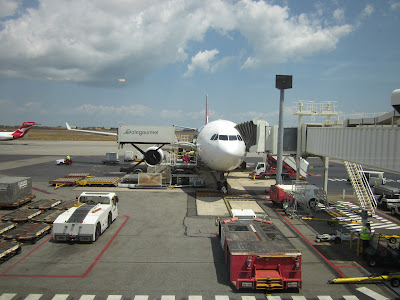 Darwin airport. It was hot even walking down the tunnel. 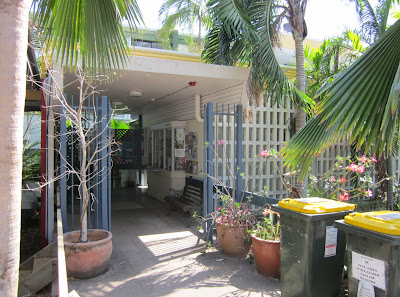 And finally to the place I am staying at. It's some sort of hostel thing but I have a room to myself and it has a refrigerator  The girl at the desk was French and came from Strasburg. She was quite surprised to think that anybody knew of Selestat at all.