Some of you may know that my prime hobby is listening to classical music and I have been attending concerts regularly since I was 17. Back in 1974 when I was in Europe with a Eurail Pass that allowed me to go anywhere by train, I attended concerts everywhere. One of my favourite orchestras to visit was the Concertgebouw in Amsterdam and I was keen to revisit them during our house exchange.

Fortunately there was a good concert scheduled while we were here and on January 2nd I duly bought two tickets at 25 euros each. Even in January most tickets were sold but I managed to get seats by the middle aisle on the ground level towards the back of the hall. I prefer to be upstairs on the balcony but those seats were gone and I was still quite satisfied with the location.

A generous program of spectacular works, it was billed as an introductory concert. No long works from Mahler or Bruckner. The conductor was Mariss Jansons who is their regular conductor.

Back in 2007, the prestigious Gramophone published an article that ranked the world's orchestras and the Concertgebouw came first, an enormous honour. To the shock and horror of Philadelphia, their famed orchestra came in at number 23. More about that later. 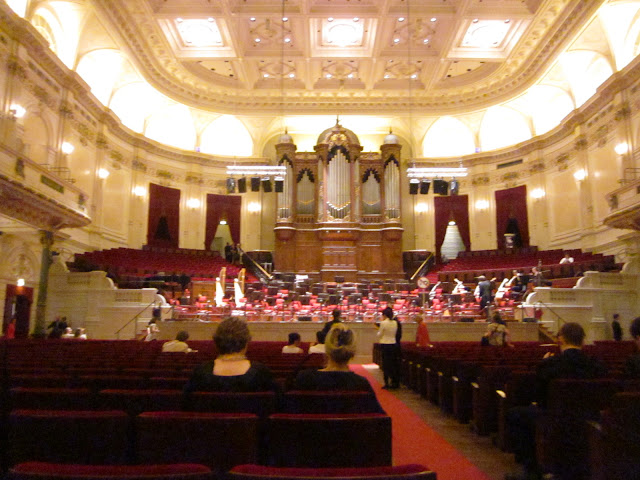 We arrived in plenty of time just after they opened the hall to the audience. The hall itself is beautiful with renowned acoustics. This was the view from my seat. 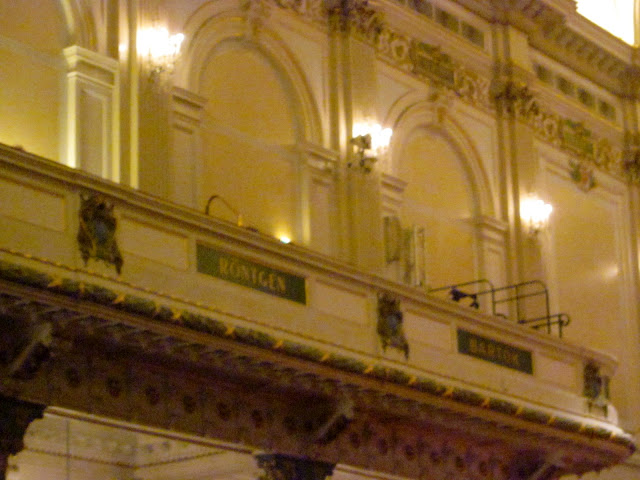 The hall is ringed with the names of famous and some not so famous composers such as Rontgen shown here.

The hall gradually filled with both musicians on stage and audience. Some European orchestras have a tradition of filing onto the stage together just before the start of the performers. This orchestra came on in dribs and drabs over the course of about thirty minutes. Oddly enough it was the double basses who came on first followed by a clarinet player. In Philly, the first is usually the oboe player, Richard Woodhams, who is already on stage warming up when we get there early. The Dutch oboe player only arrived about five minutes before the start.

The audience was incredibly noisy almost drowning out the sound of the orchestra tuning up. However when the lights dimmed and the conductor walked down the stairs to the podium it became quite silent except of the occasional cough. European audiences are extremely quiet when the music plays.

Back to 2007 and Philadelphia. The afternoon before I read the article from the Gramophone, I had attended a concert at Philly with Michael Tilson-Thomas conducting a Mahler Symphony. The performance was fabulous, everything you could want from a great orchestra. Few orchestras in the world could match that performance. So why was the ranking 23? The answer was their regular conductor, Christoph Eschenbach. You can read about his poor relationship with the orchestra here.

My own view is simple; he is a great musician but he was the wrong conductor for that orchestra, particularly at the time he was hired. I had happened to be present at a concert he conducted in the late 90's and had remembered that the orchestra had not really played for him. They are a fussy orchestra and while they play expertly for all conductors, they only really play their hearts out for a few of them. I was totally crushed and disappointed when the announcement was made. My fears were justified at the subsequent concerts which he conducted. This is a big, powerful, voluptuous orchestra that I liken to a V-12 engine compared to most orchestras that are V-8's, 6's or 4's. He tried to get to get the orchestra to play like a four cylinder. There are times when the music calls for savagery and oomph and he would not let the orchestra loose to do what they do best. The two prior conductors were Muti and Sawallisch, the first the red hot Italien and the latter the German full of tradition and rectitude. The orchestra was ready for the red-hot lover treatment again and they got the cultured wimp.

After two seasons of walking out at the end of concerts feeling angry instead of exalted, I cancelled our subscriptions for a year. The Gramophone article made Eschenbach's continued presence untenable and he effectively resigned. After a long search while Charles Dutoit filled in as conductor, the young Yannick Nezet-Seguin was hired and he is the fire brand the orchestra has needed. His concerts have been really good and his Verdi Requiem from last year knocked everybody's socks off. The hall is now full every time he conducts.

Needless to say, I was interested to see how Philly now measured up to the number one Concertgebouw.

The opening wind solos for the Romanian Rhapsody were beautifully played and immediately I could understand why this hall is renowned for its acoustics. The stage area is relatively tiny and it appears that the musicians are crammed together but somehow it all works. The sound this orchestra produces is much lighter than the dark sound of Philly. Each is fine in its own way, they are different like a blonde is from a brunette. I suspect this piece had not received as much rehearsal time as the others because it was a little rough in places, particularly the violins and it was definitely a low voltage performance.

If you don't know the piece take a look at this and that for a great performance with Celibidache conducting. Or this recorded version with Antol Dorati conducting.

So on to the Rachmaninov. The orchestra vacated the stage while the piano was raised up from under the stage. Marianne remarked that it had to be highly appropriate for Amsterdam where they have to hoist all their large furniture up into the houses.

Denis Matsuev came down the stairs to the stage towering over Jansons. When Jansons stood on the podium his head was then level with that of Matsuev. I had never heard him play before and since he won the International Tchaikovsky Competition in 1998 he should be able to tickle the ivories. He specializes in playing Rachmaninov and you can see a video of him playing the Rachmaninov Rhapsody on a theme of Paganini here 1, 2, 3.

The performance was very good though Matsuev occasionally bangs with his right hand at the loud bits. He certainly knows how to get that melancholy Russian feeling during the slower bits. He is such a powerful player that at times he seemed to overpower the orchestra which played much better in this piece. More rehearsal time, I presume. There was one curious moment which demonstrated the difference between the Concertgebouw and Philly orchestras. If you watch about a minute into the third part of the video, the orchestra repeats the tune that the pianist has just played. Since it is generally recognized that Rachmaninov loved playing with the Philadelphia Orchestra because of its sound, this is a special moment when you hear this piece played in Philly. They have incredible depth and sonority that the Dutch could not match.

Matsuev then played an encore, the Rachmaninov Prelude Op23 No 5. Here he is playing it at another performance. Of course there was another standing ovation.

If you want to see some dazzling playing take a look at this encore at another occasion when he played in the Concertgebouw. 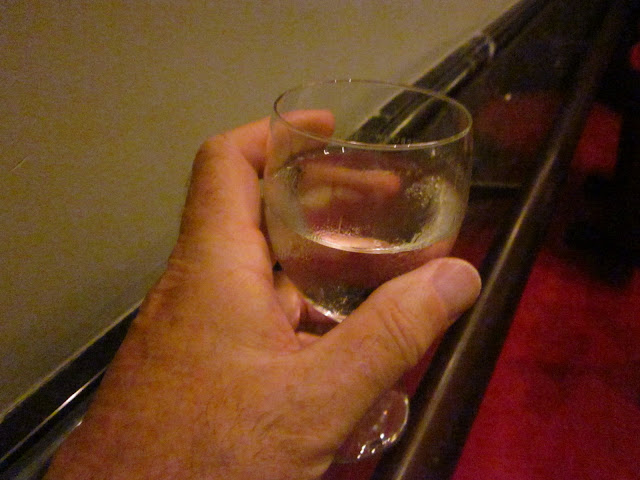 Now here is a custom that I really liked. At half time they handed out free drinks. We chose the sparkling water over the orange juice but I believe you could also get champers if you were quick enough.

The Prokofiev starts off with an incredible din followed by the sudden quiet of the massed strings. You can see Claudio Abbado conduct it here. This was a good performance and the orchestra was definitely playing better now but the audience did not applaud too much. When I first started going to the Philadelphia Orchestra, Riccardo Muti was the conductor and this was one of those 12 cylinder powerful pieces that was incredibly loud and powerful in the old Academy of Music.

Finally the Firebird. Here you can see Muti conducting Philadelphia back in the 80's I would judge by looking at the personnel in the orchestra at the time. Later we talked about the composition of the two orchestras. Back in 1974 the Concertgebouw was unusual in that it had quite a few women players which it still has. If you look at the Muti video you will see the orchestra was still mostly male. Now it would be close to 50% female with a lot of Asian players. Most of the Concertgebouw players appeared to be white and I suspect Dutch.

There was a blind woman sitting in front of us and she almost jumped out of her seat at the sudden fortissimo about half way into the piece (see 10:58 in the Muti video). It was a pretty good performance and the audience gave it a standing ovation. Again, I noticed a few rough edges and the last note was not quite as precisely together as it should have been.

If all this sounds like I was disappointed in the concert you would be incorrect. The concert could have been a little better but then again I say that about most concerts I go to in Philly. This was not an ideal program to judge an orchestra by except for how well technically they can play. Top orchestras are judged by how well they can play those extraordinary pieces that are very difficult to interpret and require the greatest of conductors. This is where the Concertgebouw excels as well as Philadelphia. If you have a lot of time, take a look at this video of the Concertgebouw conducted by Jansons in Mahler's 2nd symphony. One of my favourite movements in all of music starts at 24:40.

So this has been an unusual blog for me, but now you know what I am passionate about.

One of the nice, thoughtful things that really impressed me was that your concert ticket could be used as a ticket on the trams and buses up to three hours before and after the concert. The concert started at 8:15 and so we caught a tram about 5:30 and had dinner at an Indonesian restaurant near the hall. On the way home, a group of plain clothes ticket inspectors got on the tram and our concert tickets were fine. It was all very civilized.

As a last item, the Concertgebouw is going to Australia later this year where along with other pieces they will be playing the Firebird. Note the prices of the seats. No Robin, save your money for the $10 rush tickets at Philly when you come home.