In May 2014 I took the train from Moscow to Beijing, a journey of 6 nights and 7 days. You can read about it here. Before we left the US, I arranged to meet in London two blokes I had met on the trip. 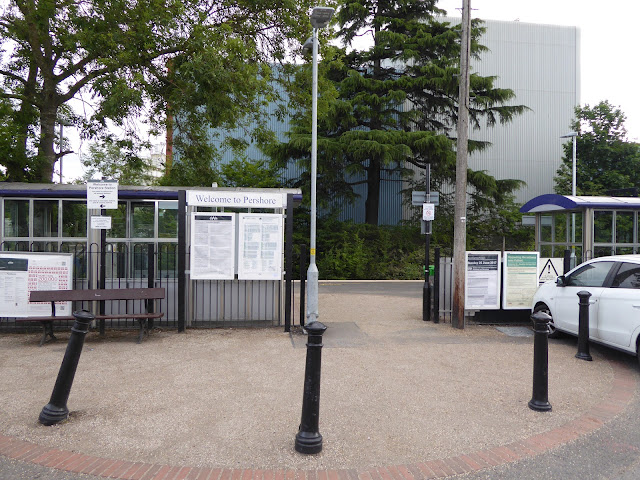 But to get to London I had to take a two hour train trip to Paddington Station, famous for its bear. 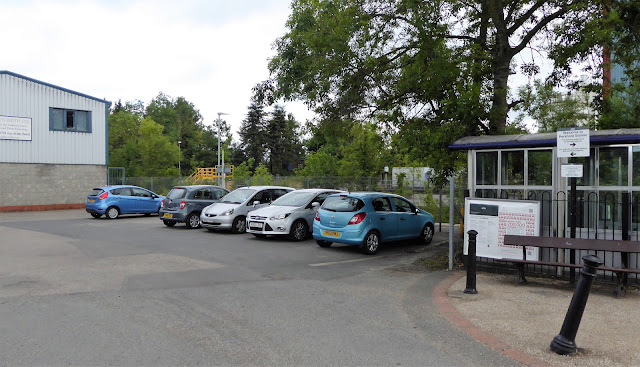 The closest station to Upton is Pershore and it took about 20 minutes to drive there. The parking lot is not large so I was pleased to get a parking spot. 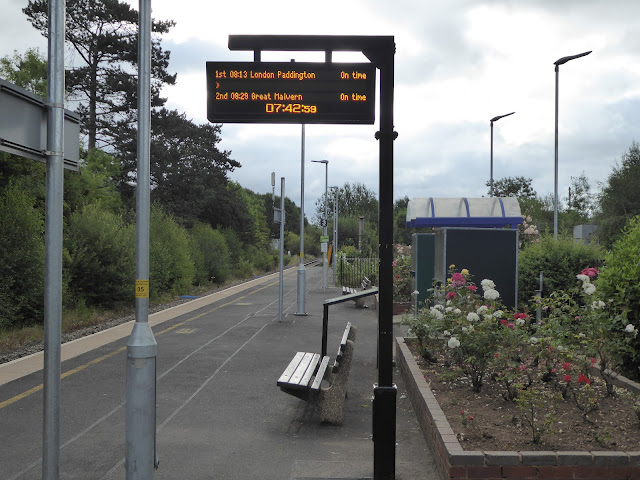 As you can see I arrived a bit early. 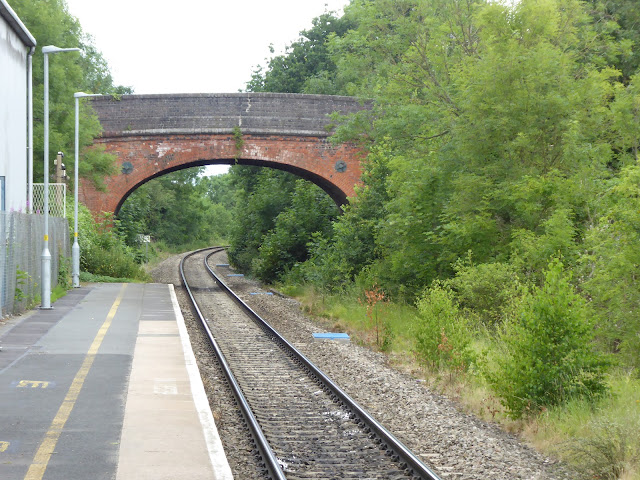 The line to Worcester. 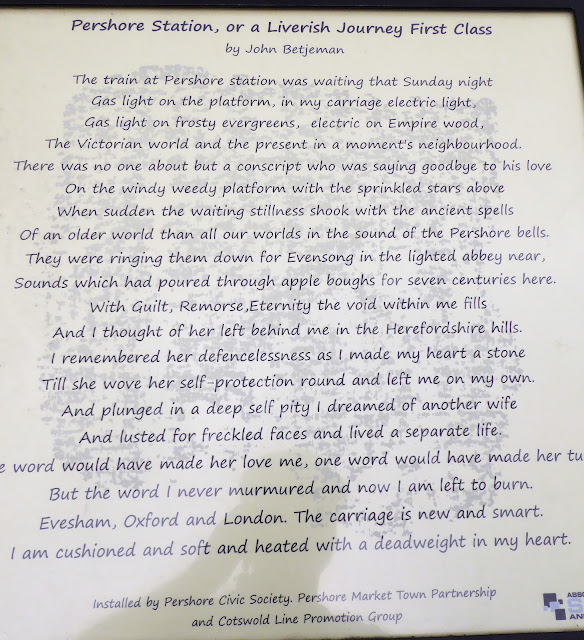 It's not often that you go to a station that features in a poem by a well known poet. It's worth taking the time to read about John Betjeman and if you ever walk in front of  the magnificent St Pancras Station, remember that he was instrumental in saving it from demolition. If you remember the bear in Brideshead Revisited, Betjeman was the model with his bear Archibald Ormsby-Gore. 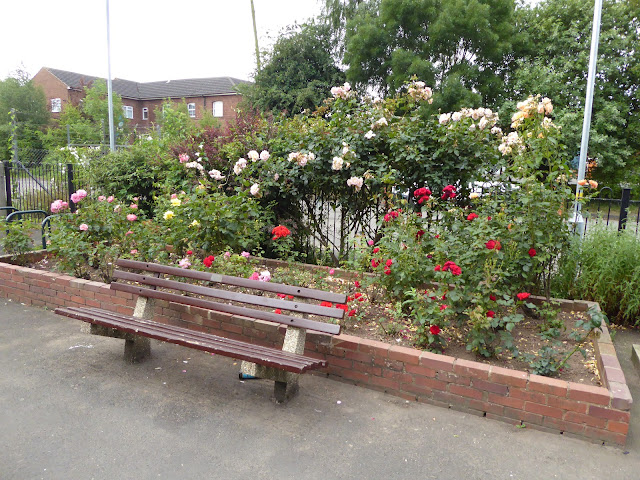 Of course there had to be a garden. 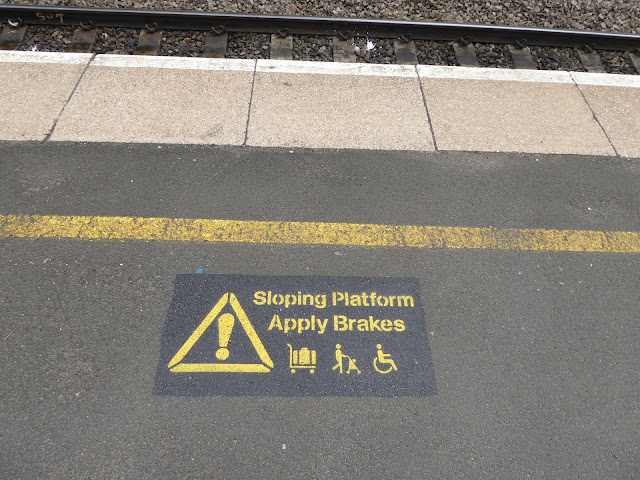 To be honest I had not noticed the slope. 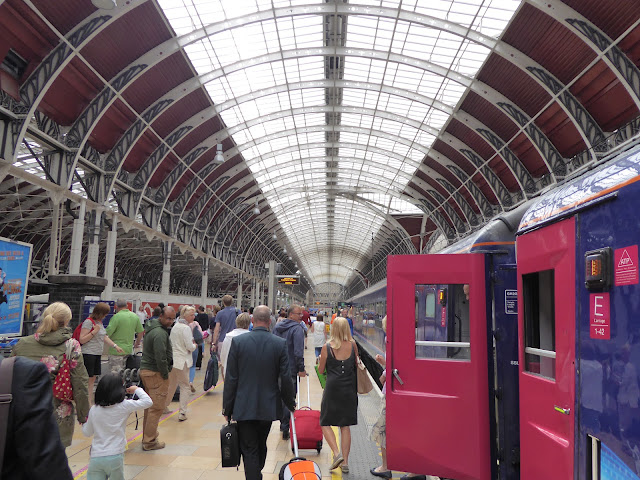 The train journey was uneventful and the train arrived at Paddington on a few minutes late. 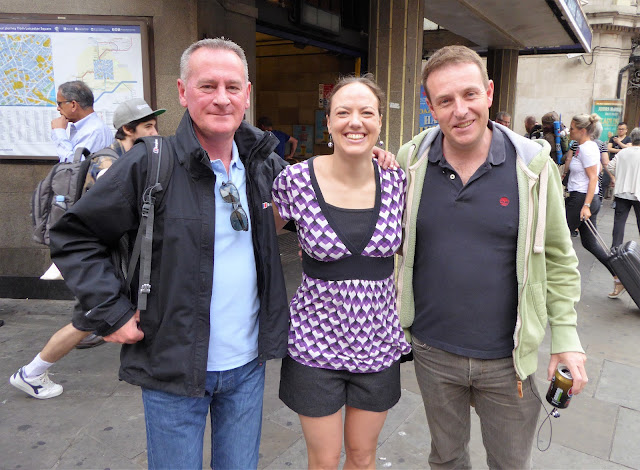 The train was mostly empty in first and second class so the four English speakers on the train who did the entire journey got to know each other. We have kept in touch and since two of them live in or near London we arranged to meet outside Leicester Square Station. I took the train to Paddington Station and then the Underground and popped up to find one of them at the entrance. Rob and I chatted for a few minutes and then saw our companion John across the street walking towards us. However to our great surprise he was accompanied by Angelika from Germany who had flown over from Stuttgart for the reunion. 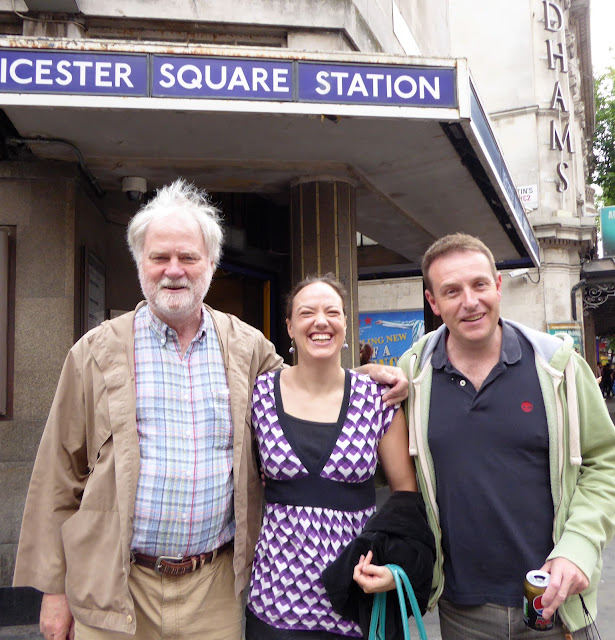 More group photo with wind blown hair on the left. I will need to have a haircut when I get home which is always an interesting experience where the full panoply of Cecil County living is on display.

John used my camera to take the  photo and by mistake pressed the video button and the results were interesting and at least it's a recording of our voices. 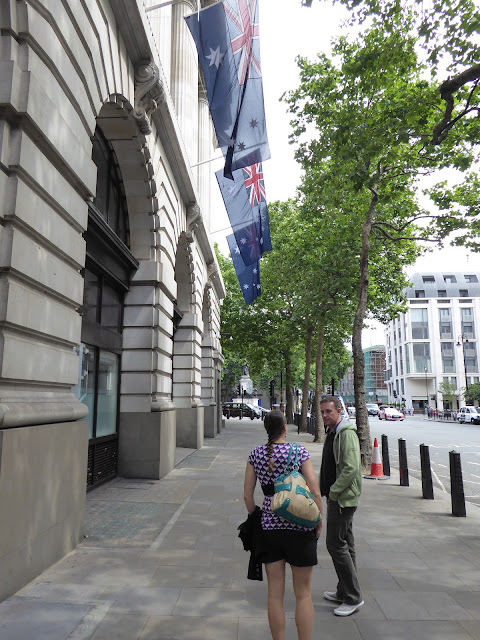 Our idea was to go on a pub crawl so we first enjoyed a pint at the Brewmaster next to the Underground station. From there we headed down fleet street and past Australia House. 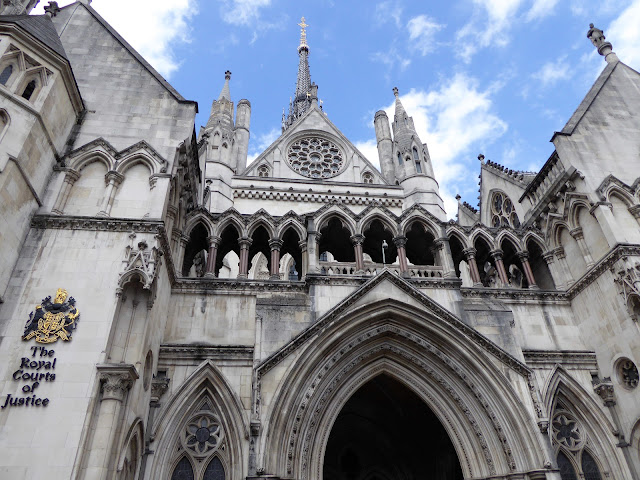 The Royal Courts of Justice. 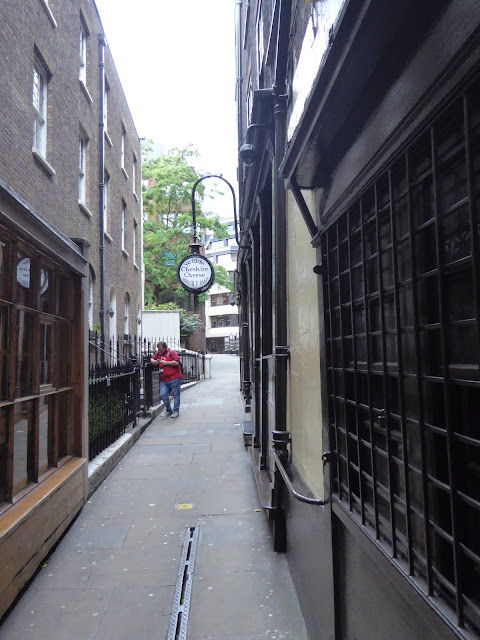 This lane leads to the Cheshire Cheese where Dickens used to drink and write. 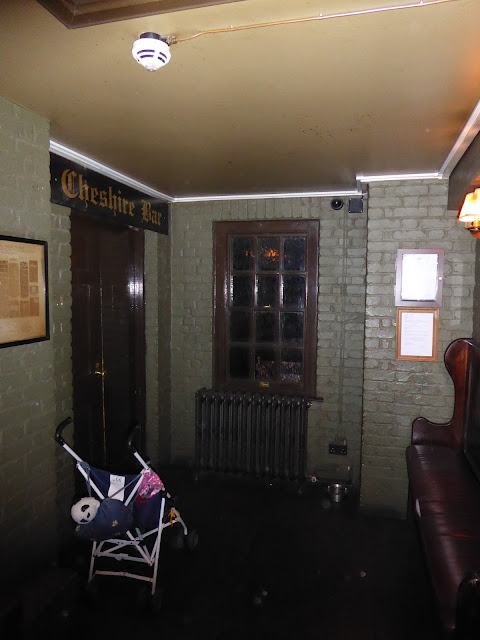 He apparently wrote in this room. However we did not linger and proceeded to another pub. 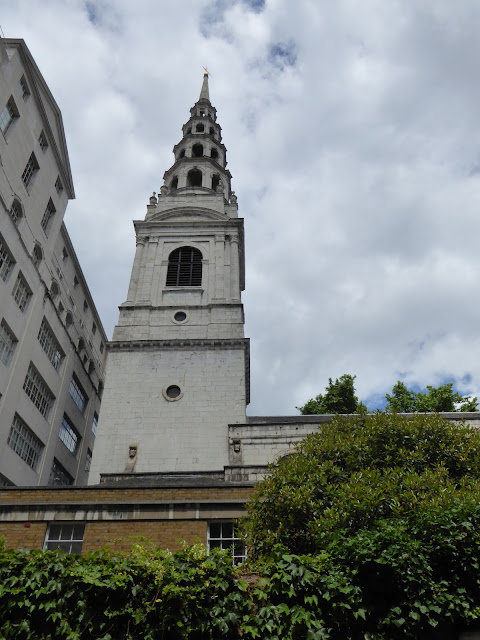 St Brides Church, designed by Christopher Wren. It was badly damaged in the blitz of WWII and had to be rebuilt. 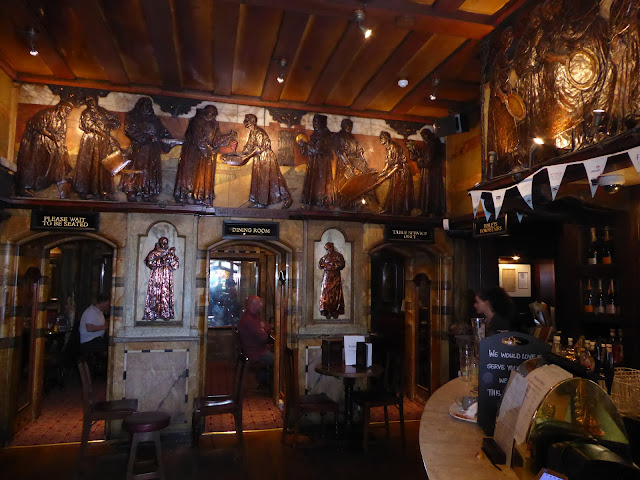 This is the inside of the Blackfriar pub but we chose to drink another pint outside in the beer garden watching the world go by. Conversation flowed as you might expect. We were like four excited children. 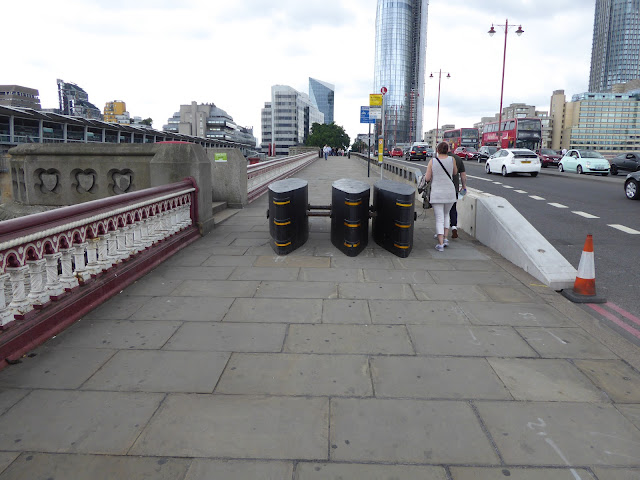 As a result of recent terrorism the footpaths on bridges over the Thames now have barriers. This is Blackfriars Bridge. There was no evidence that I could see that would suggest that people were frightened by the terrorist events. As I mentioned to the others, when I first came to London in 1974, the IRA was still running its bombing campaign. 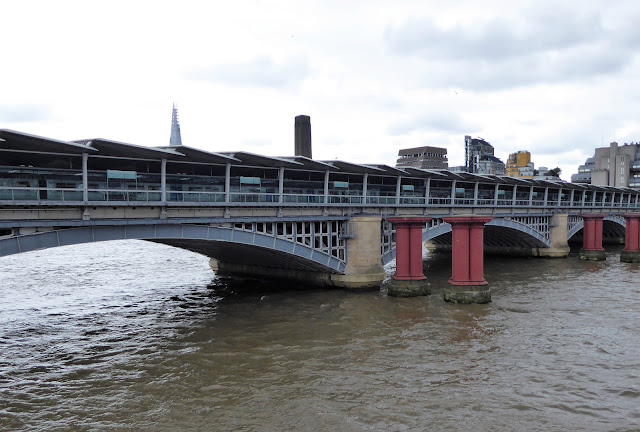 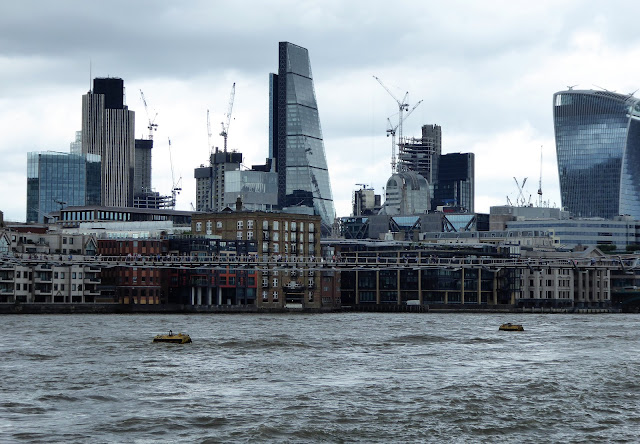 The London skyline is now nothing like what I saw in 1974. But the big difference between the London of 1974 and 2017 is the access to views like this. Like most major cities with a river or harbour, pedestrian access to the water is much improved. London is such an interesting city with so many things to see.

We all had lunch of fish and chips at the Anchor Bankside that was pretty awful but we didn't care. It felt so good to meet up with old traveling companions and talk about our experiences since we first met. Somebody commented that our ages were quite different 30s, 40s, 50s and almost 70 but we enjoyed each other's company. It's interesting that I never got the feeling that anybody was trying to outdo the others, we were just happy that we all loved to travel and got to do it.