Sydney - a train trip from Kiama

Kiama is a town of about 13,000 about two hours drive south of Sydney. It has a wonderful location beside a spectacular coastline. You can see some of the coastline here from a drive down the coast we did three years ago. Although we are very interested in Ulladulla as a possible future location for us to live in Australia, we are also interested in Kiama which is an hour closer to Sydney and is on a train line.


This map shows the road map but the train line is pretty close in most areas to the road. 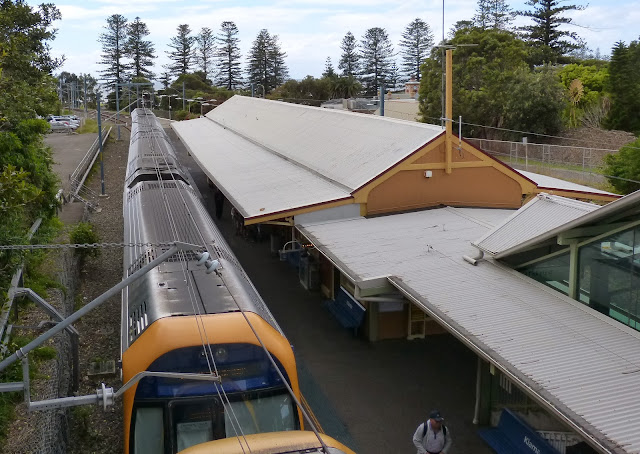 It takes about 2 hours for the train to come down from Sydney. There are quite a few stops along the way but for a senior, it only costs $2.50 for the return trip. We took this train down arriving just before noon. The train is basically a standard Sydney suburban train. 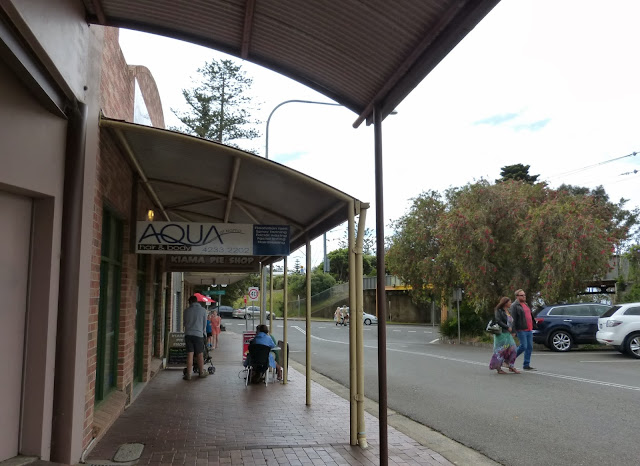 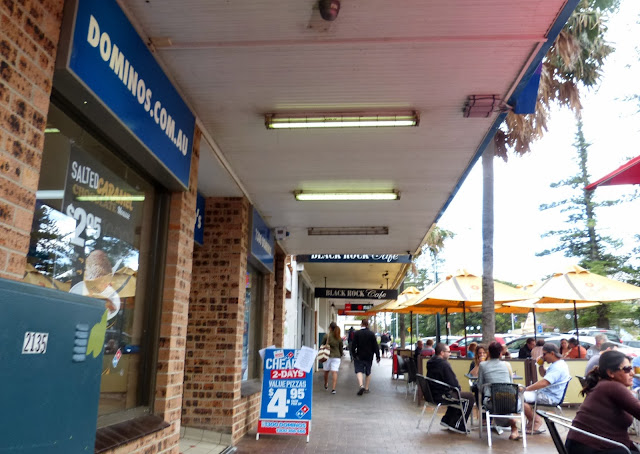 It was a holiday Monday (Labor Day) and there were quite a few tourists sitting at the outside tables eating lunch. 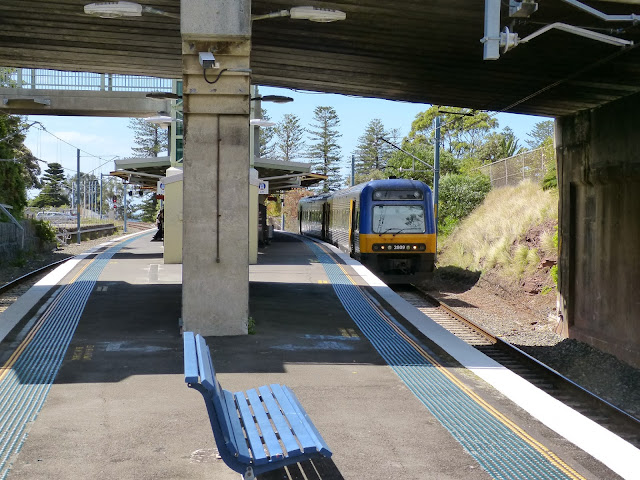 The train line extends further south to Bombaderry near a largish town called Nowra. using this diesel train. The train down from Sydney to Kiama is electric. 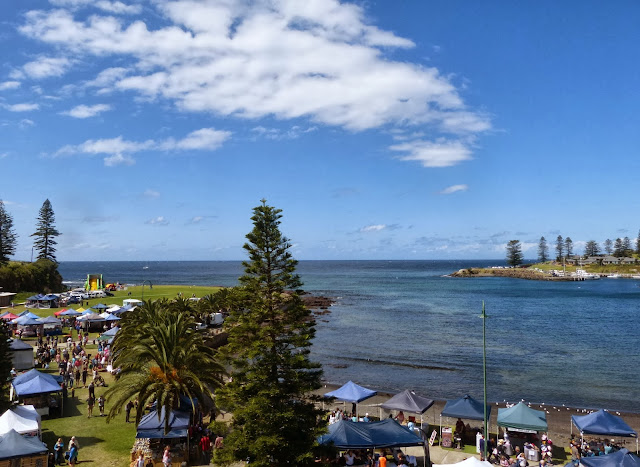 The train headed north to Sydney through the outskirts of Kiama. It looked like there was a market underway. We missed out on it. What a pity! 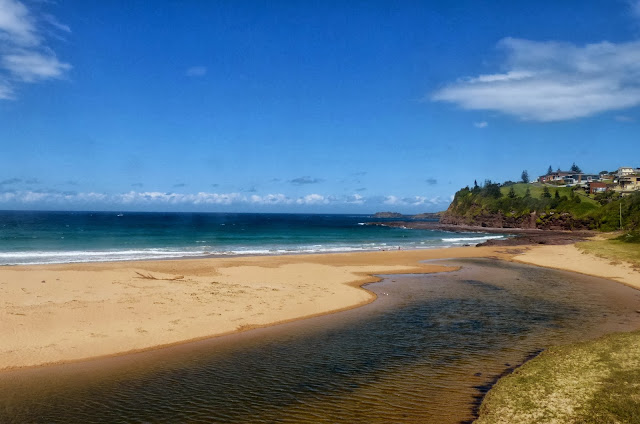 The initial few miles north of Kiama are quite beautiful as the train travels beside the ocean. 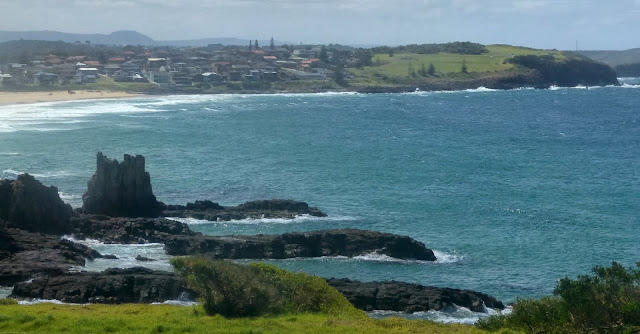 This coast line has become quite popular and new suburbs are springing up everywhere. You might have noticed that there are very few trees in this new development. Fortunately trees grow quickly in Australia so in ten years it will be quite leafy. 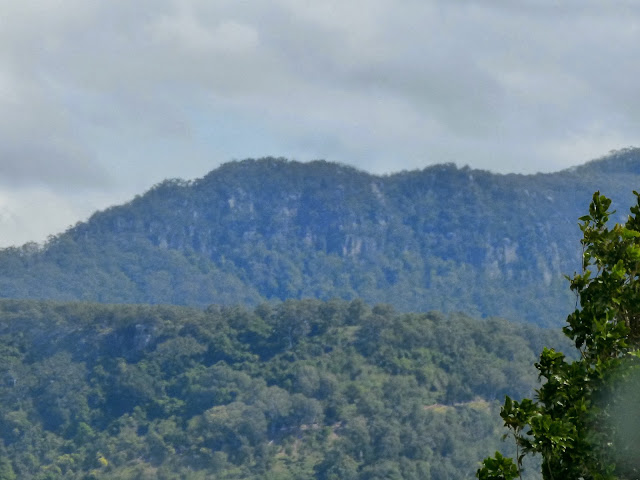 The coast line is getting crowded because of this range of mountains that lie just a few miles inland. The slopes are so steep that roads are difficult to build so expansion to the west is difficult.

This area is still one of Australia's main dairy regions. Some of my first computer programs were written for the NSW Dairy Board that tracked the results of various bulls that were named after some of the local towns in this region.

The ocean is often just a few hundred yards away. It probably would be a great area to live but most houses with a view like this are now close to $1 million. 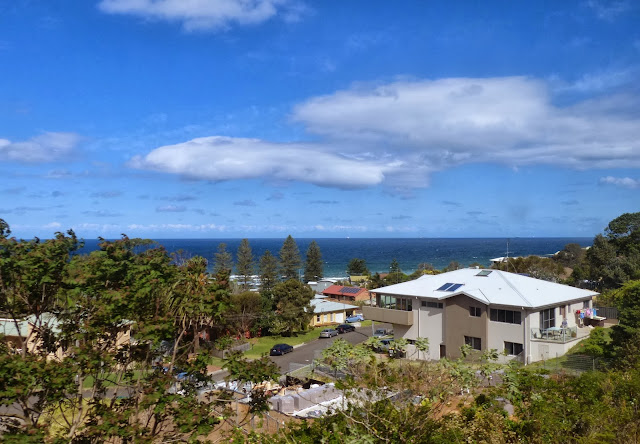 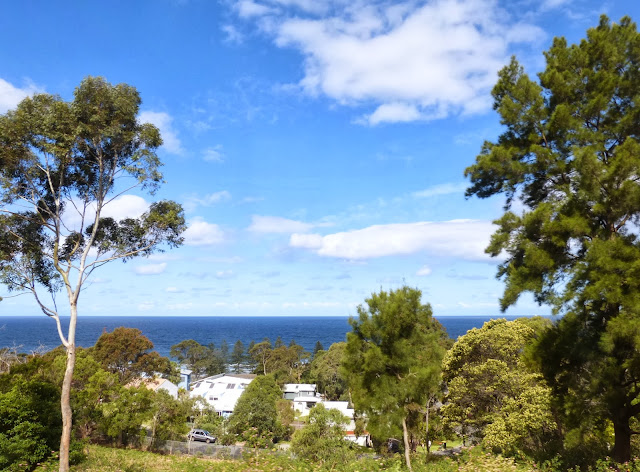 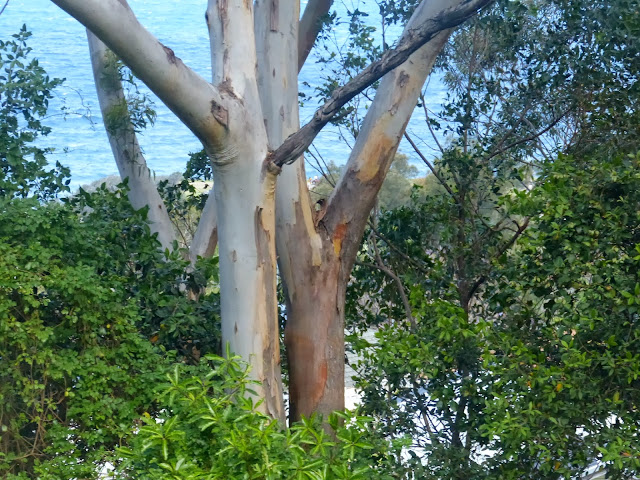 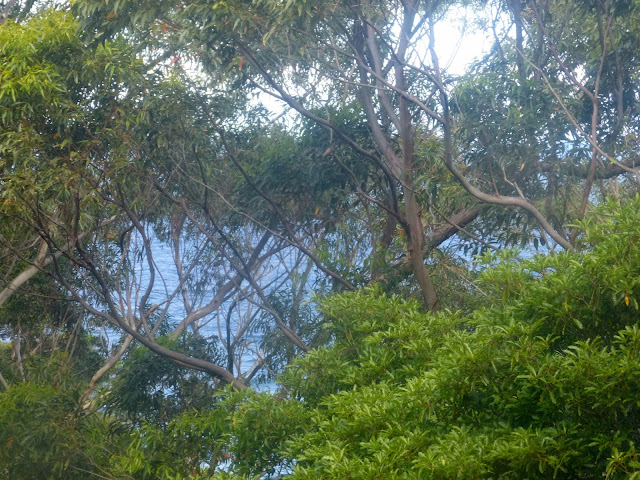 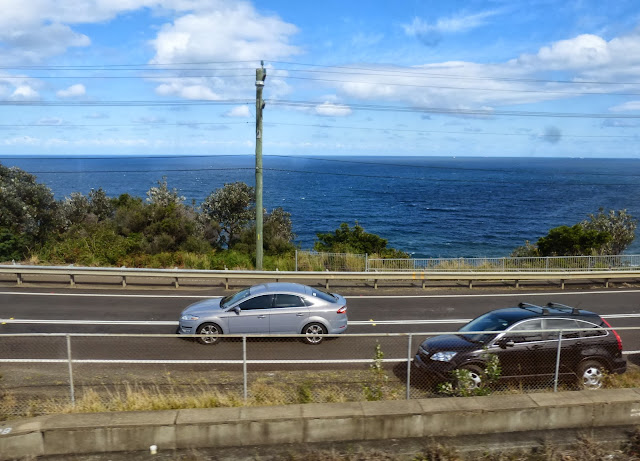 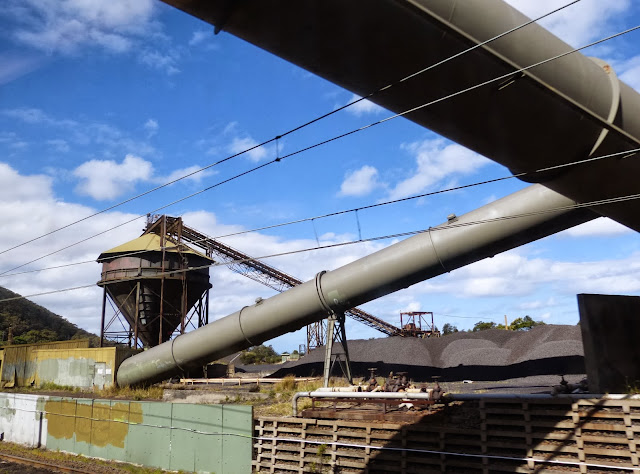 Coal was mined for many years in this area. This mine at Coalcliff was been producing for over 90 years. 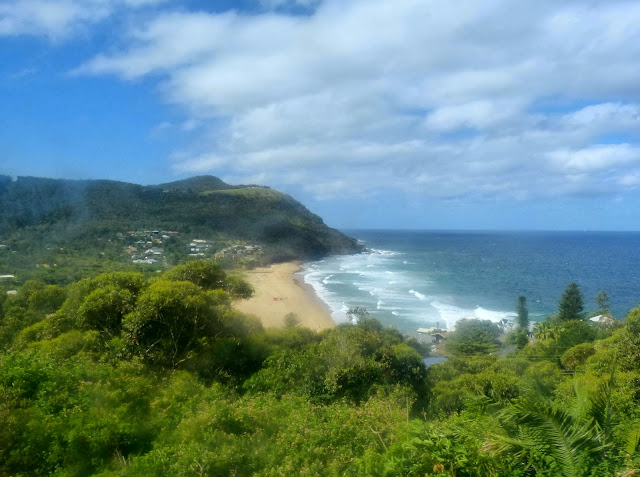 Looking toward Stanwell Park. The cliff in the distance is popular with hang gliders. 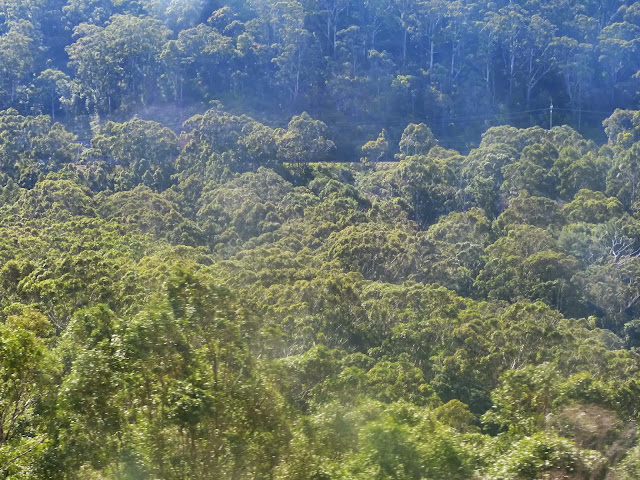 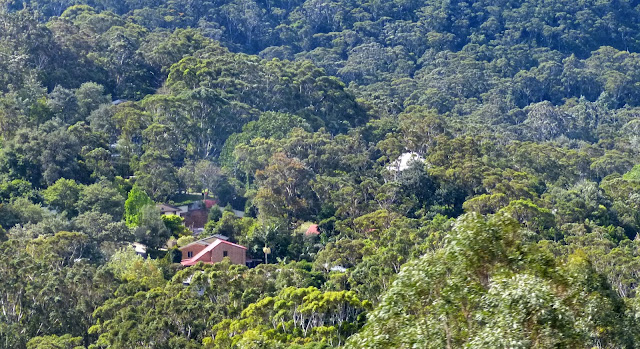 The gum trees in this area are at constant risk in summer for bush fires. These houses would have no chance in a bad fire. I could never live with that hanging over my head every hot and windy day in summer. 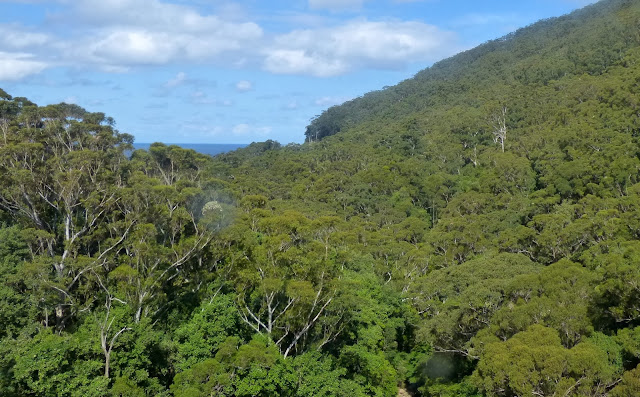 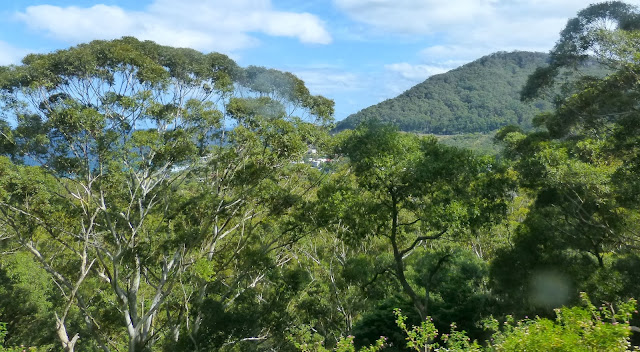 The Royal National Park extends for over ten miles north towards Sydney. It is a pleasure to drive through the western edge of the park and the train trip is pretty good too. 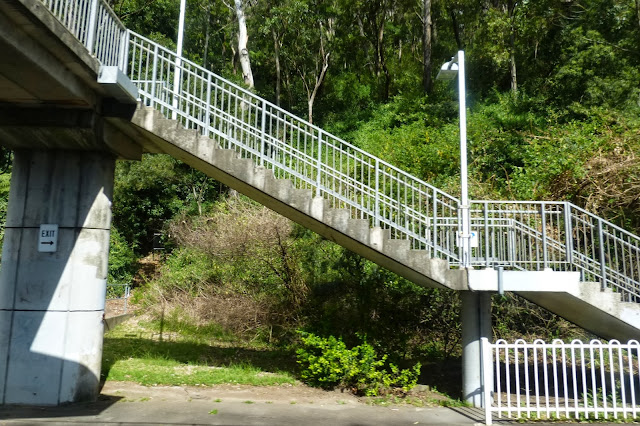 I liked the shape of the steps and the shadow on the pylon that looks like a turning page. 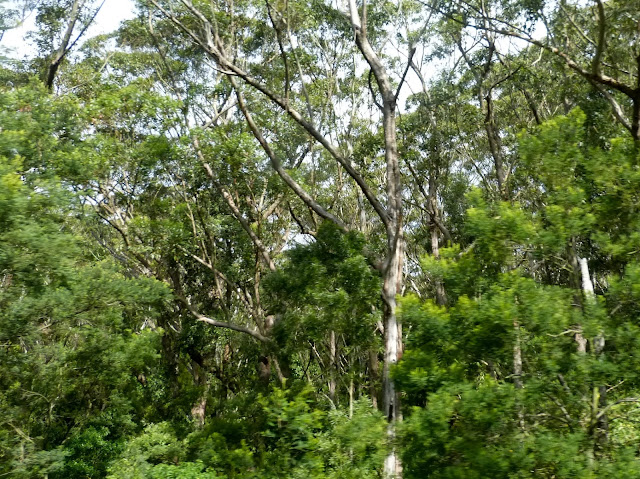 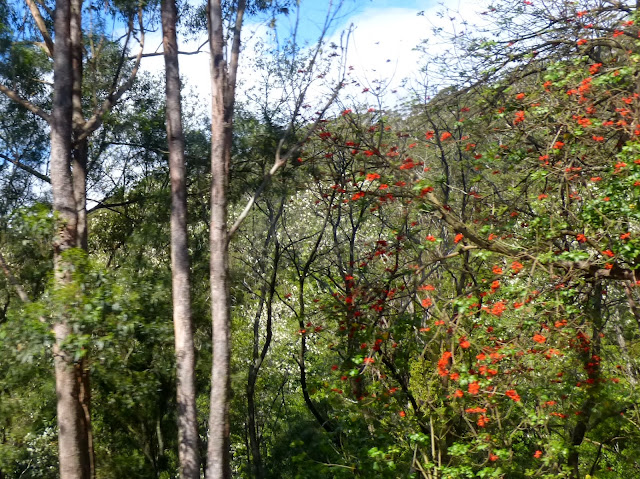 The rest of the train trip north through the Sydney suburbs is not all that interesting but overall it's a great trip.