The train trip from Dresden back to Mellrichstadt

Just before we left for Dresden, I received and email from Robin's friend Amanda saying that she would be doing a five hour lay over in Frankfurt Airport on her way home from nine months in France. Was there any chance we could meet. After a moment's thought I realized that our train pass would allow us to make a long detour so we took the 8:05 train. 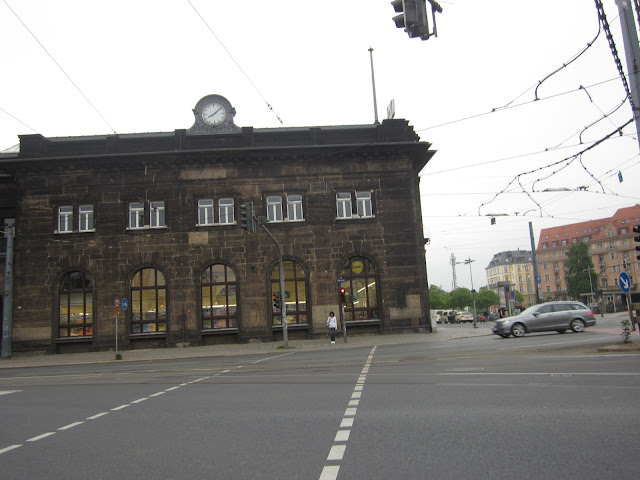 Neustadt Station is not particularly distinguished looking from the outside, but it does have a Lidls supermarket. 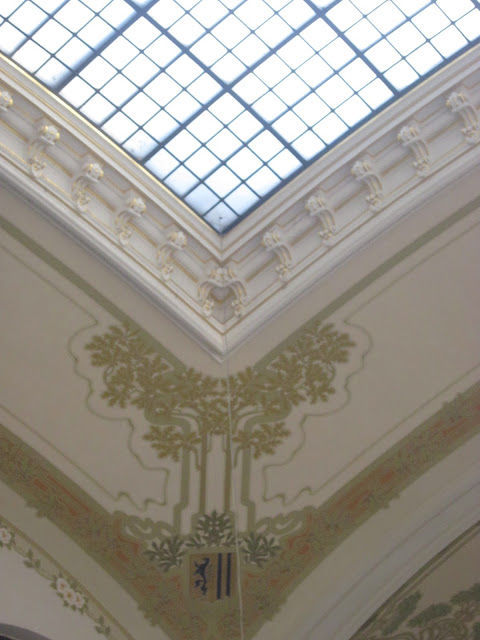 The glass roof of the main foyer is quite lovely, however. 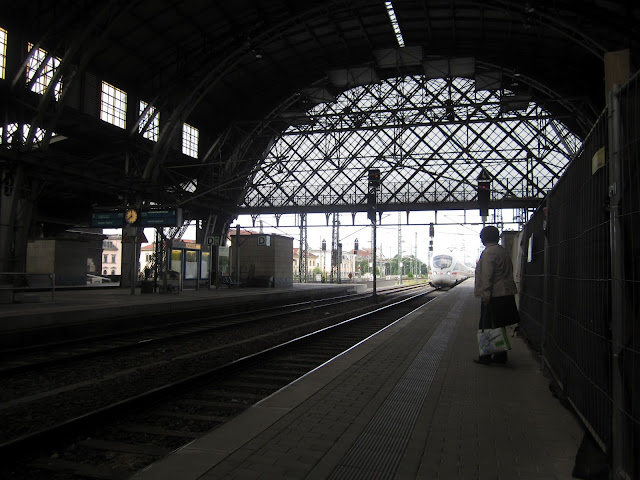 Our ICE train approached and left on time. 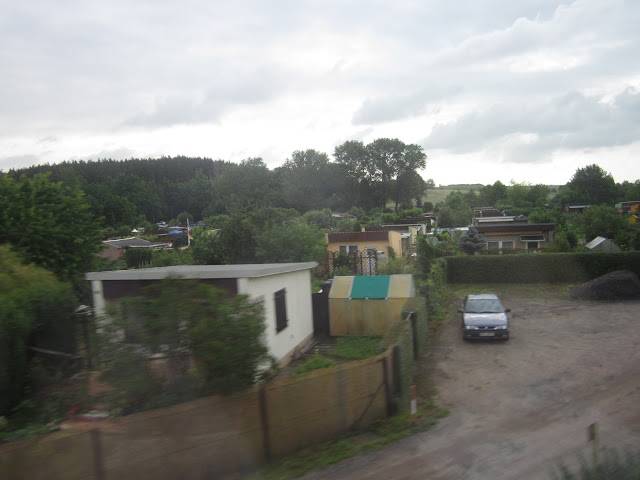 We noticed that there were quite a lot of garden plots with quite substantial sheds. 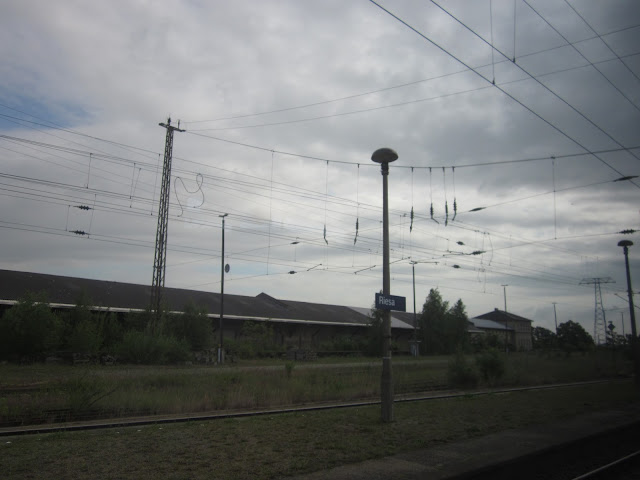 Most of the old East German railway yards are in poor condition with overgrown tracks and semi demolished buildings. 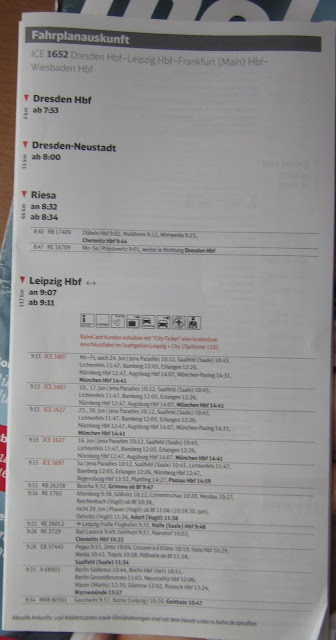 DB Bahn provides a time table of your journey with connection times. 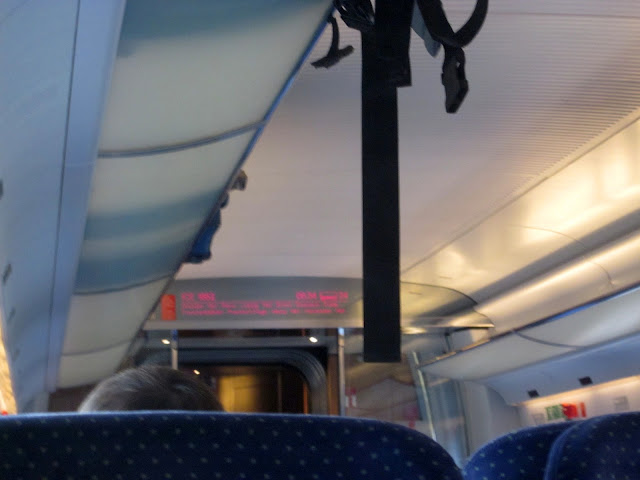 Inside the carriage. The red lettering shows the route and occasionally the speed. 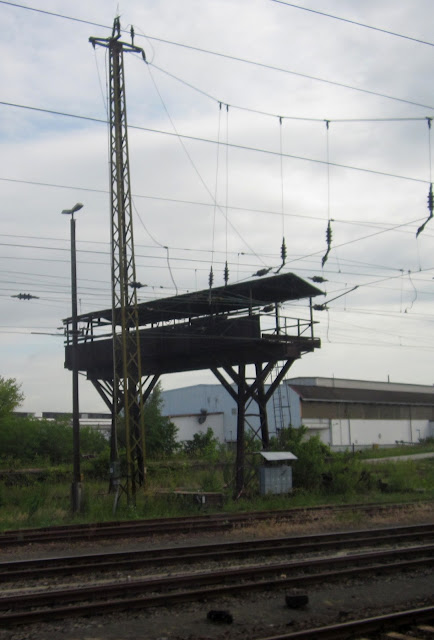 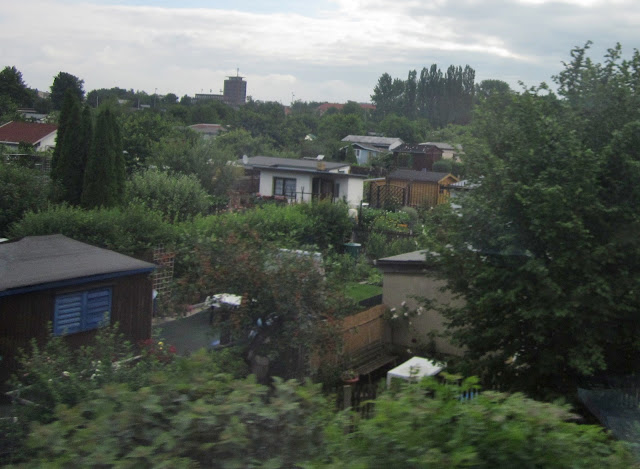 More gardens. There were even swimming pools. 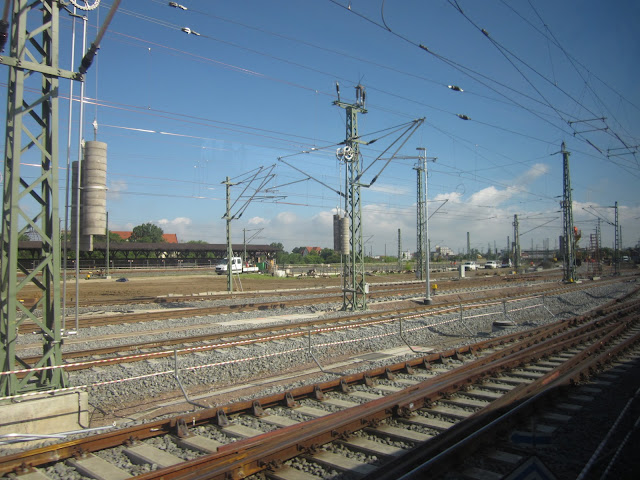 Leipzig Bahnhof. It is one of those terminus style stations where the train changes direction as it leaves. 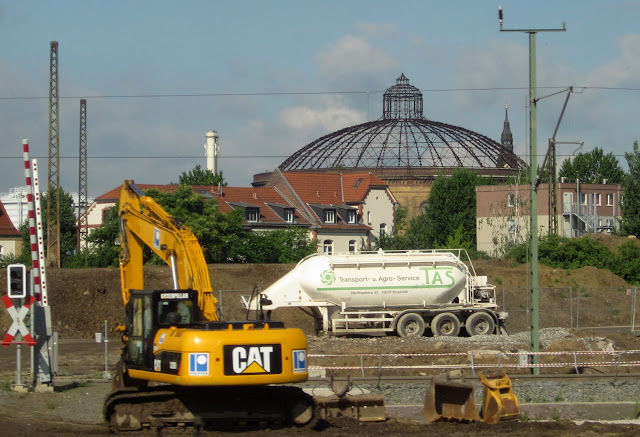 The Leipzig gasometer. Here is a video that shows it in more detail. 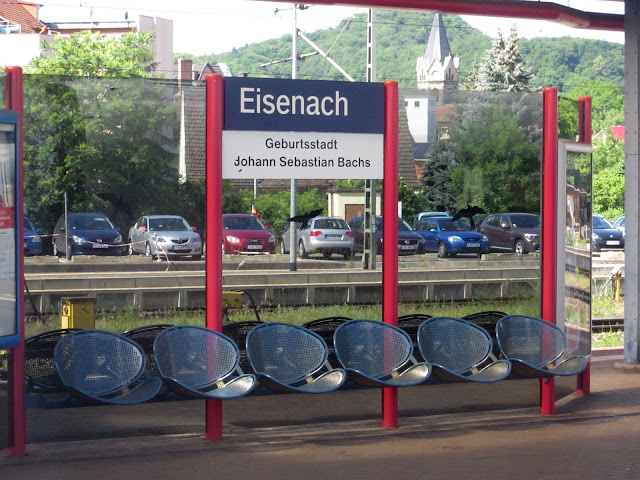 Interesting seats. This is the town where J S Bach was born.

Some of the countryside is hilly and there are the occasional remains of castles. 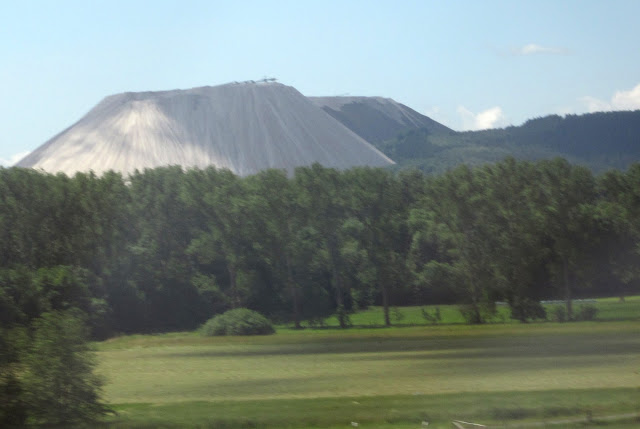 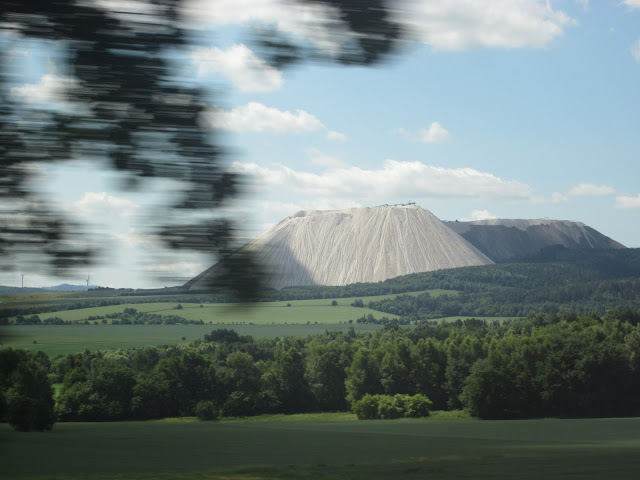 We passed this huge mountain. I have no idea what or where it was but I will keep looking. 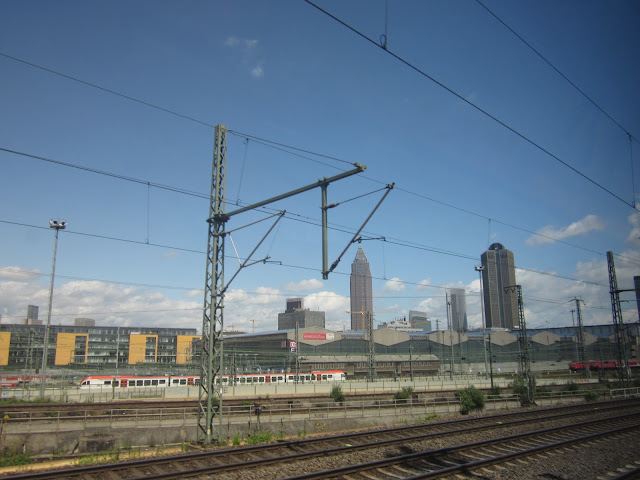 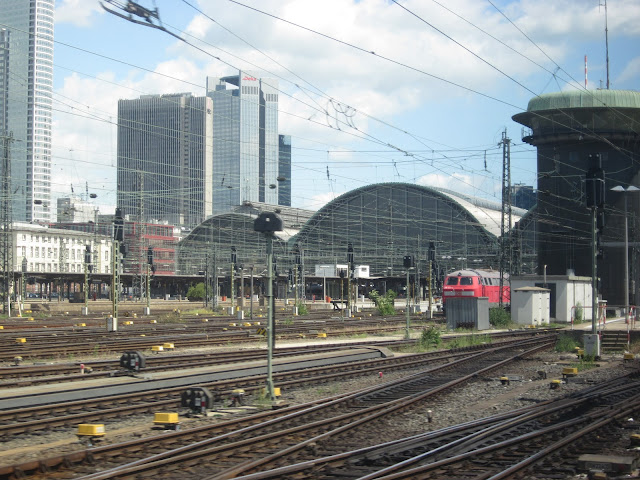 Coming in to Frankfurt Hauptbahnhof. It's a huge station. The airport station is a few miles away and that is where we got off the train. 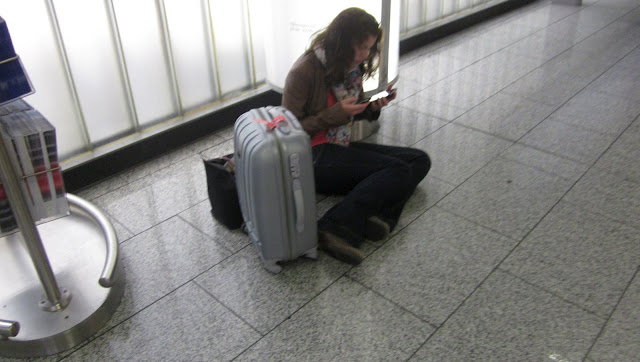 Eventually we met Giselle, the French beetch, more commonly known as Amanda. If you don't know what this is about, you haven't watched Coupling. We had a good lunch but prices were high compared to what we have been paying in regular German restaurants. Amanda had a wonderful time in France and her imitation of a French person speaking English is something to hear. It will go down well when she goes to Walmart. No doubt she really has the travel bug now. 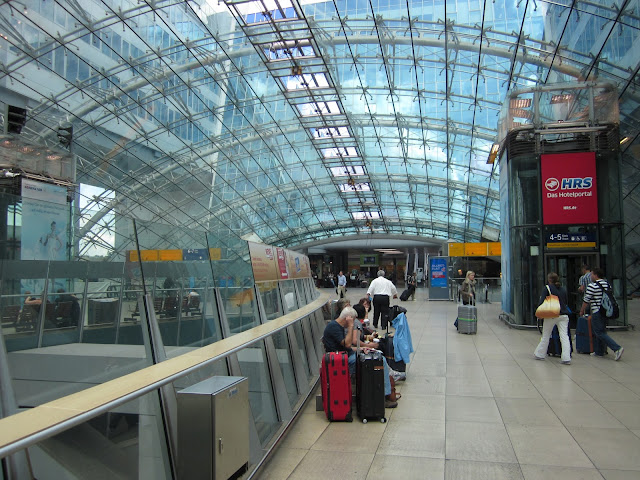 The station at the airport is new. 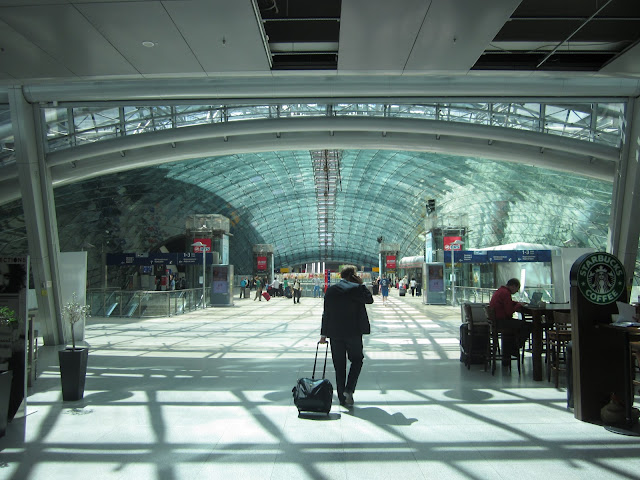 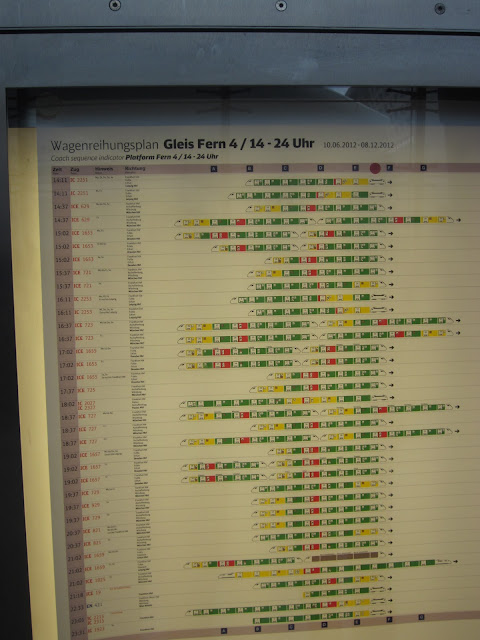 Most stations have these boards which indicate the composition of the trains at that platform. It shows you roughly where to stand to find your carriage. The trains only stop for two or three minutes so you need to get on or off quickly. 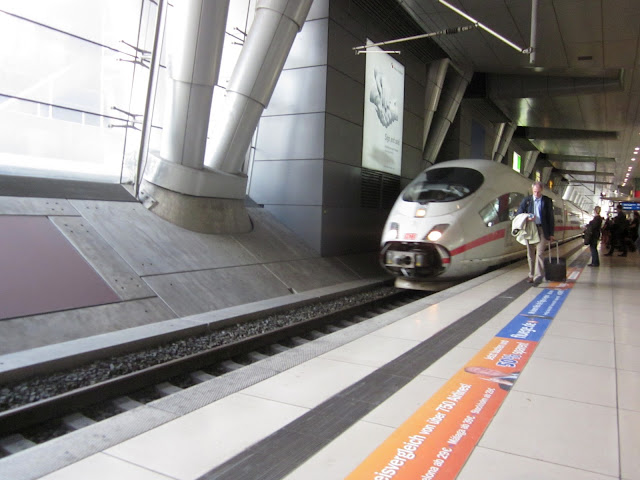 So here came our train. Unfortunately it was after 3pm on a Friday and the train was more than full. The trip to Wurzburg where we changed trains took a bit over an hour and I had to stand all the way. Poor Ray. Marianne only had to stand about 30 minutes until somebody got off the train. To add insult to injury, the train was a few minutes late getting into Wurzburg so we missed our connection to Mellrichstadt and had to way almost an hour.

It didn't get any better. A couple of older teenage girls sat next to us on the next train and chattered all the way. We got out of the carriage at Mellrichstadt and they followed us to the parking lot, still yapping away. Finally we got to the car, drove back to the house and had a cold beer.