Bus from Siem Reap to Bangkok

I had originally planned to take the bus from Siem Reap to the border of Thailand and then take a train to Bangkok. However, I realized that the train would not get into Bangkok until 8 pm and I prefer to arrive at places I have never been to before during daylight hours. So I asked the hotel owner to organize me on to a bus that would take me all the way to Bangkok. 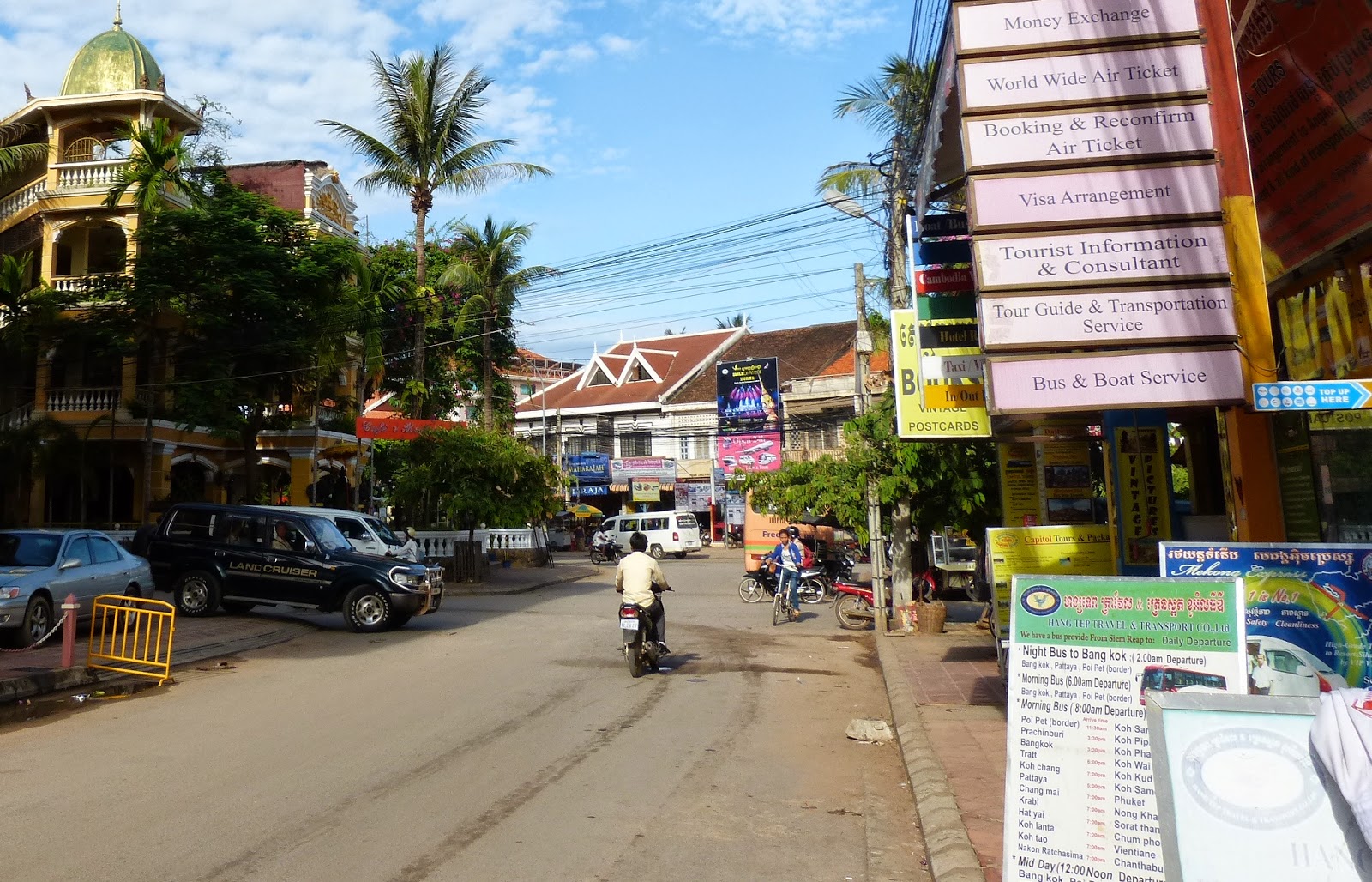 I had a good breakfast at the hotel and a tuk-tuk took me to a travel agent where I received my bus ticket. About 15 minutes later, another tuk-tuk arrived and took me to the actual place the bus would leave from. I got on the bus and the bus set off at the appointed time of 8 am. It meandered around SR for a while picking up some extra passengers so it was about 8:45 before we finally hit the road.

It was a chance to see some more of SR and it looked quite interesting. I wouldn't mind coming back here, but if Marianne were with me, she could go and see the temples and I would stay in SR and drink beer. 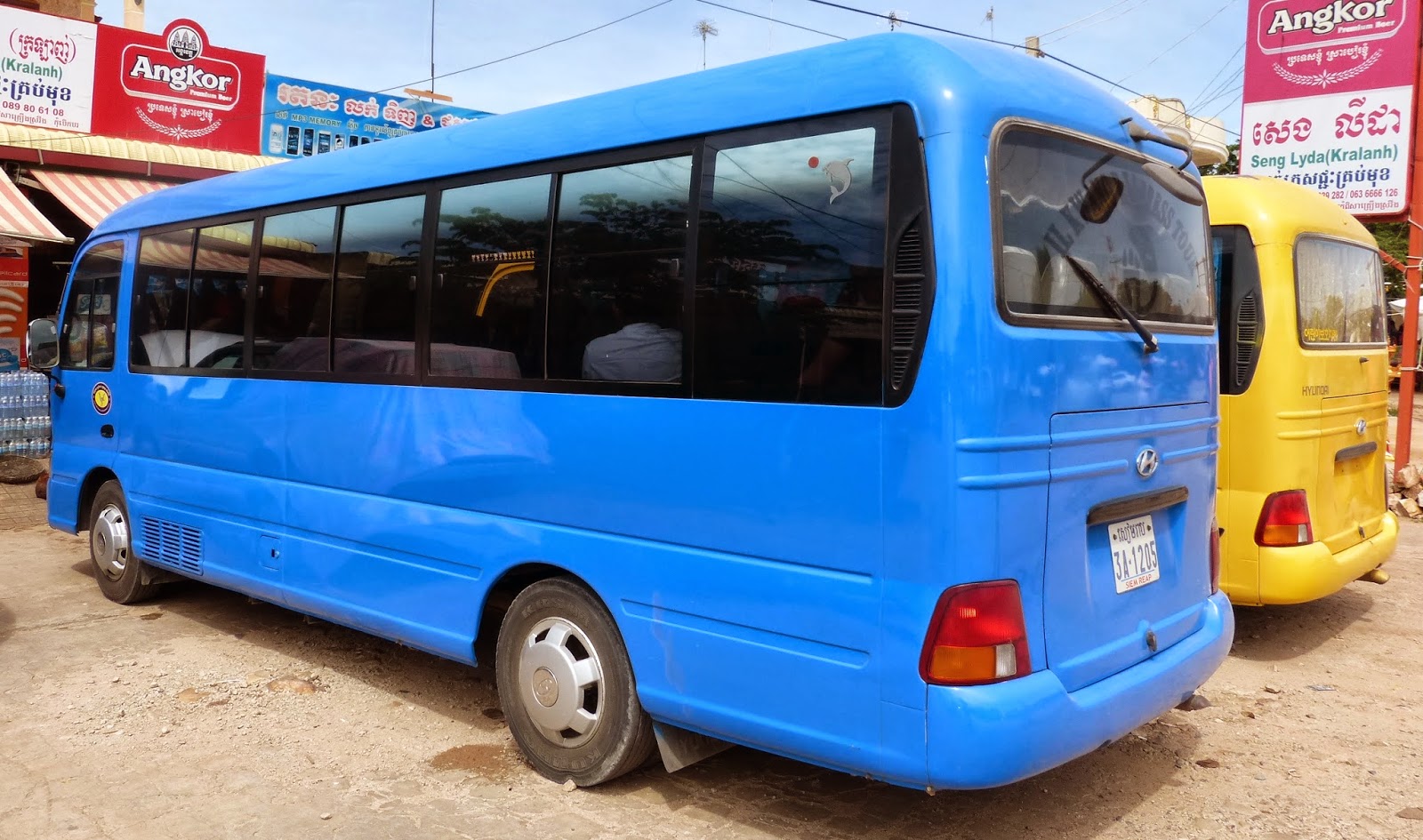 My blue bus had a companion yellow bus. My bus was full and I suspect the yellow bus was as well. 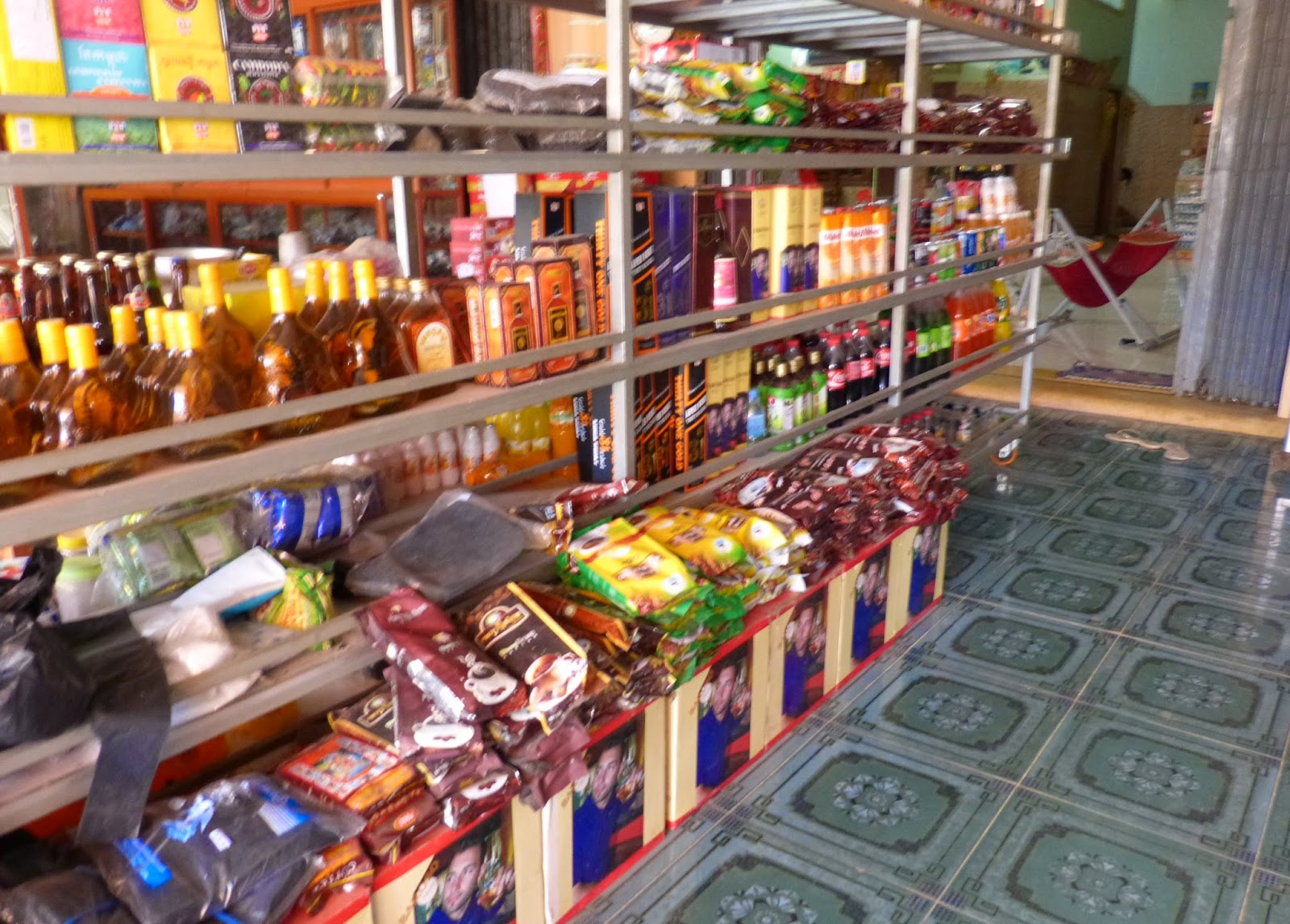 The bus journey involves several stops for bath room breaks. Actually I think they stop so that some restaurant or shop can make some money out of hot and thirsty passengers. This bus group did not provide and free water bottle. Fortunately I had plenty of water.

The roads were much better from SR to the Thai border than they were from PP to SR. 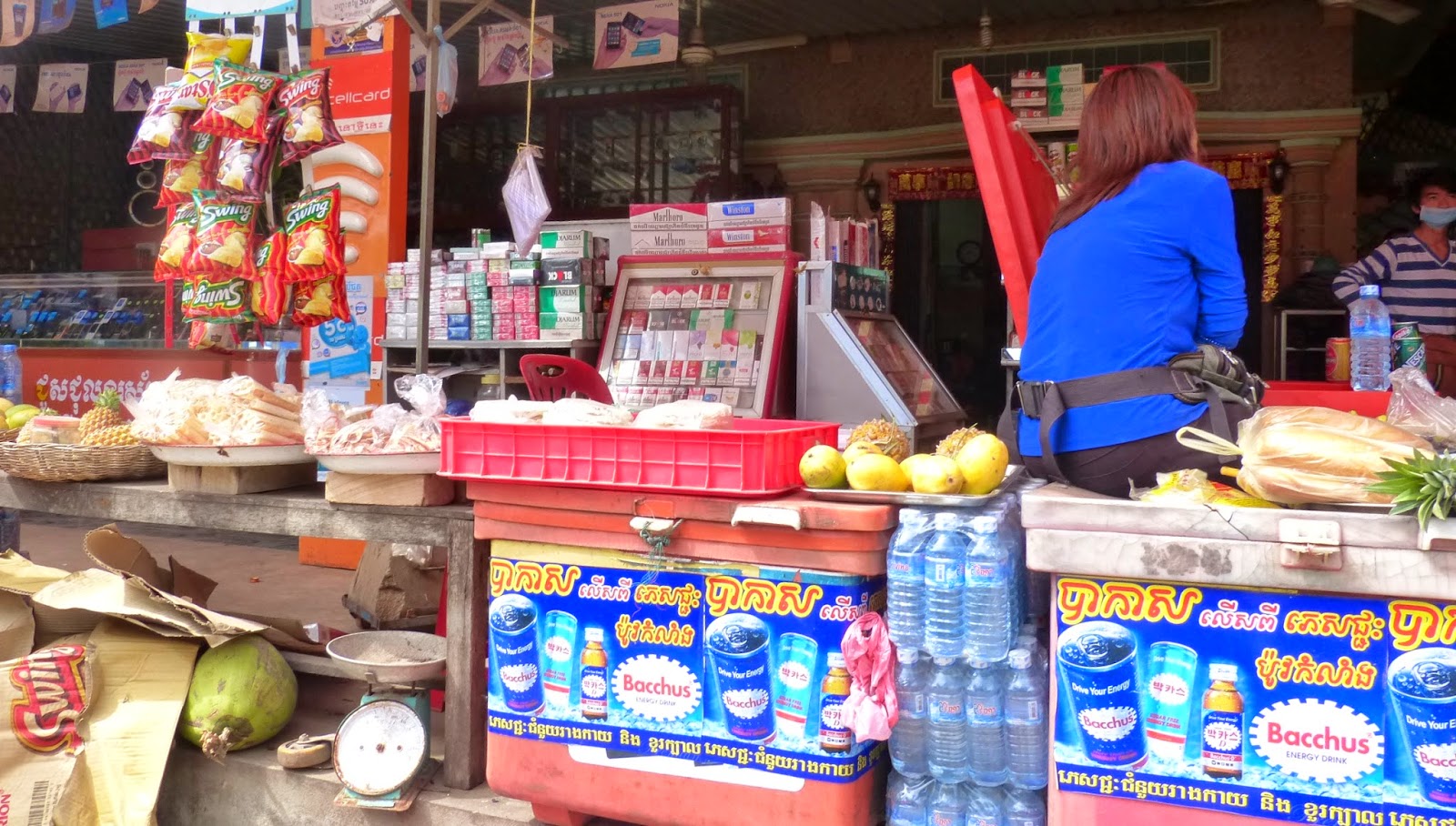 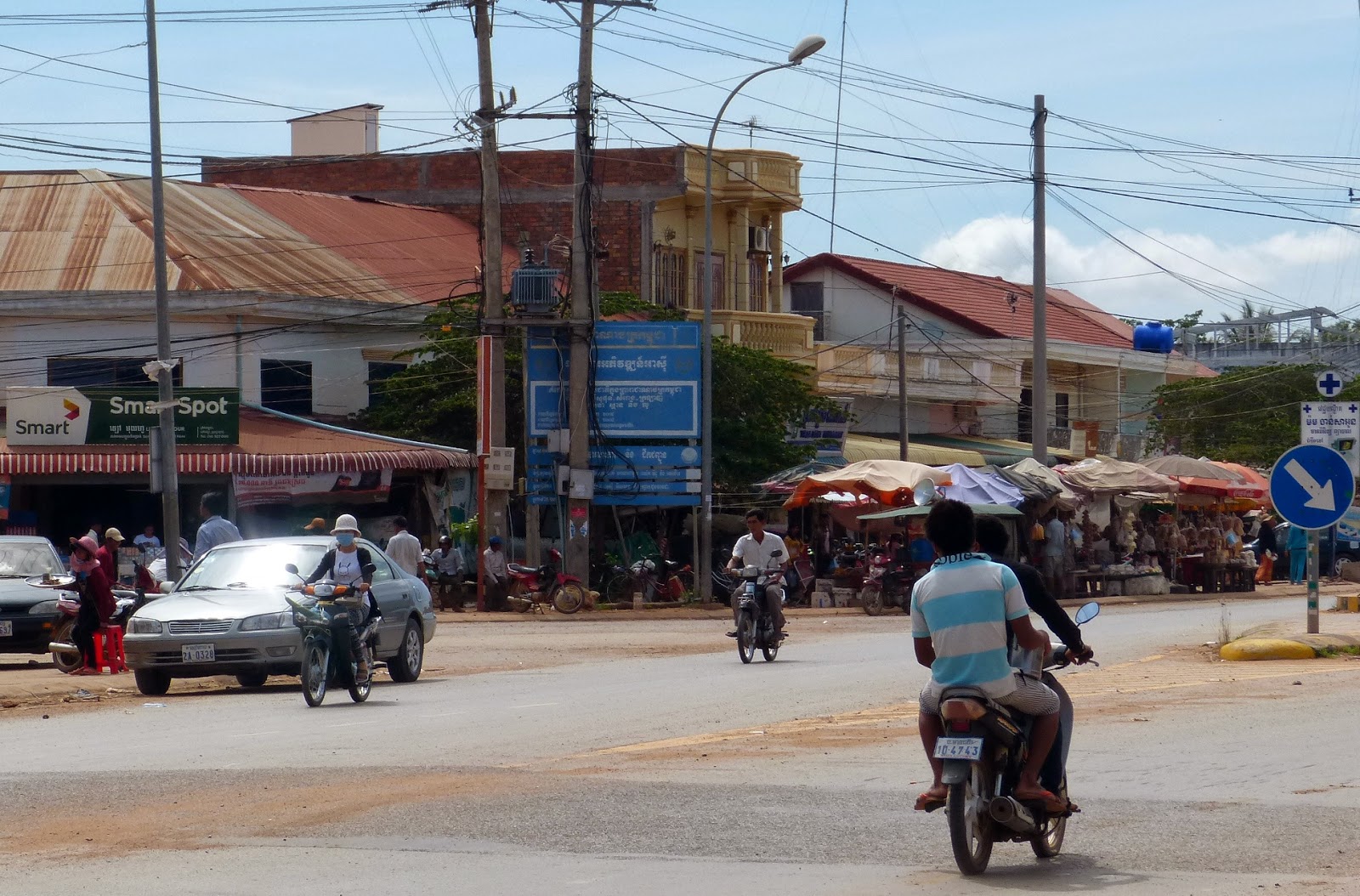 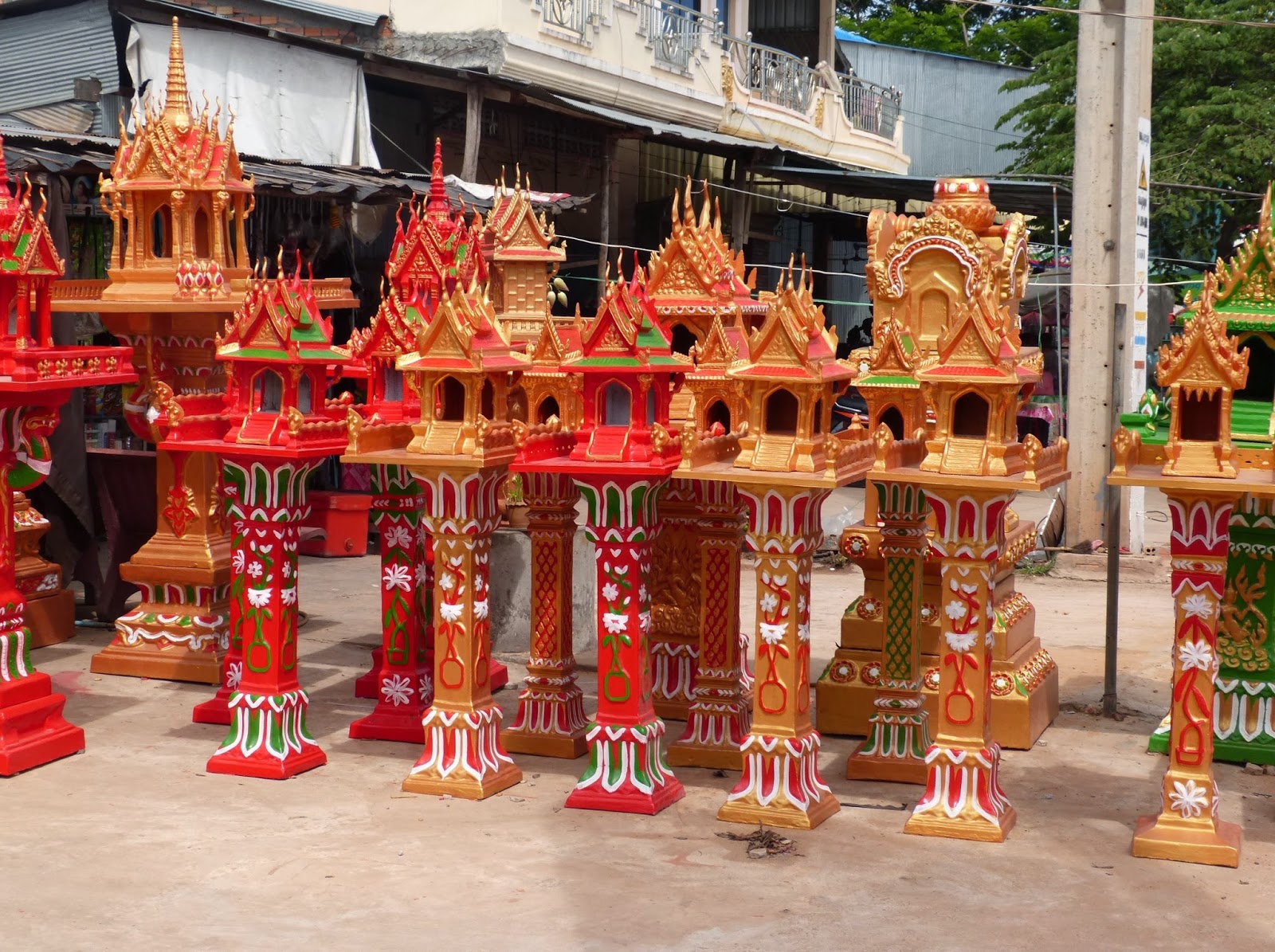 One of the bus riders said that these were Ghost Houses for sale. I doubt one of them could have fitted into the bus it was so crowded. 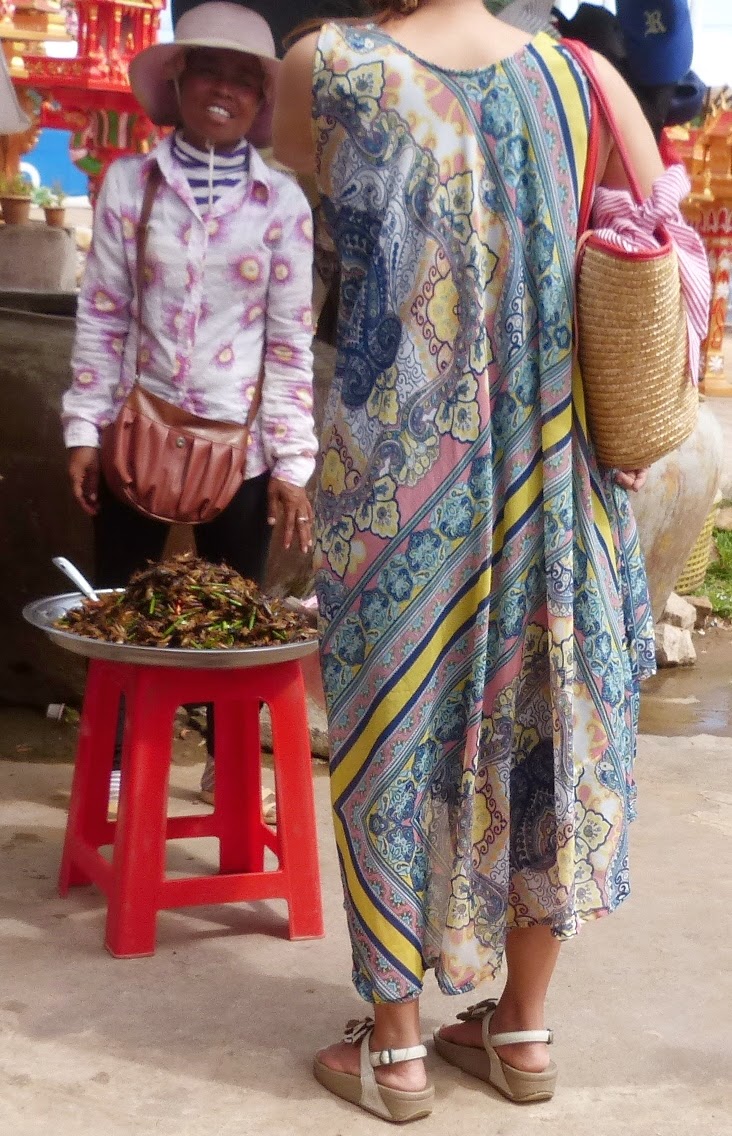 The woman was selling some kind of bug that looked like a cockroach. I was not that hungry. 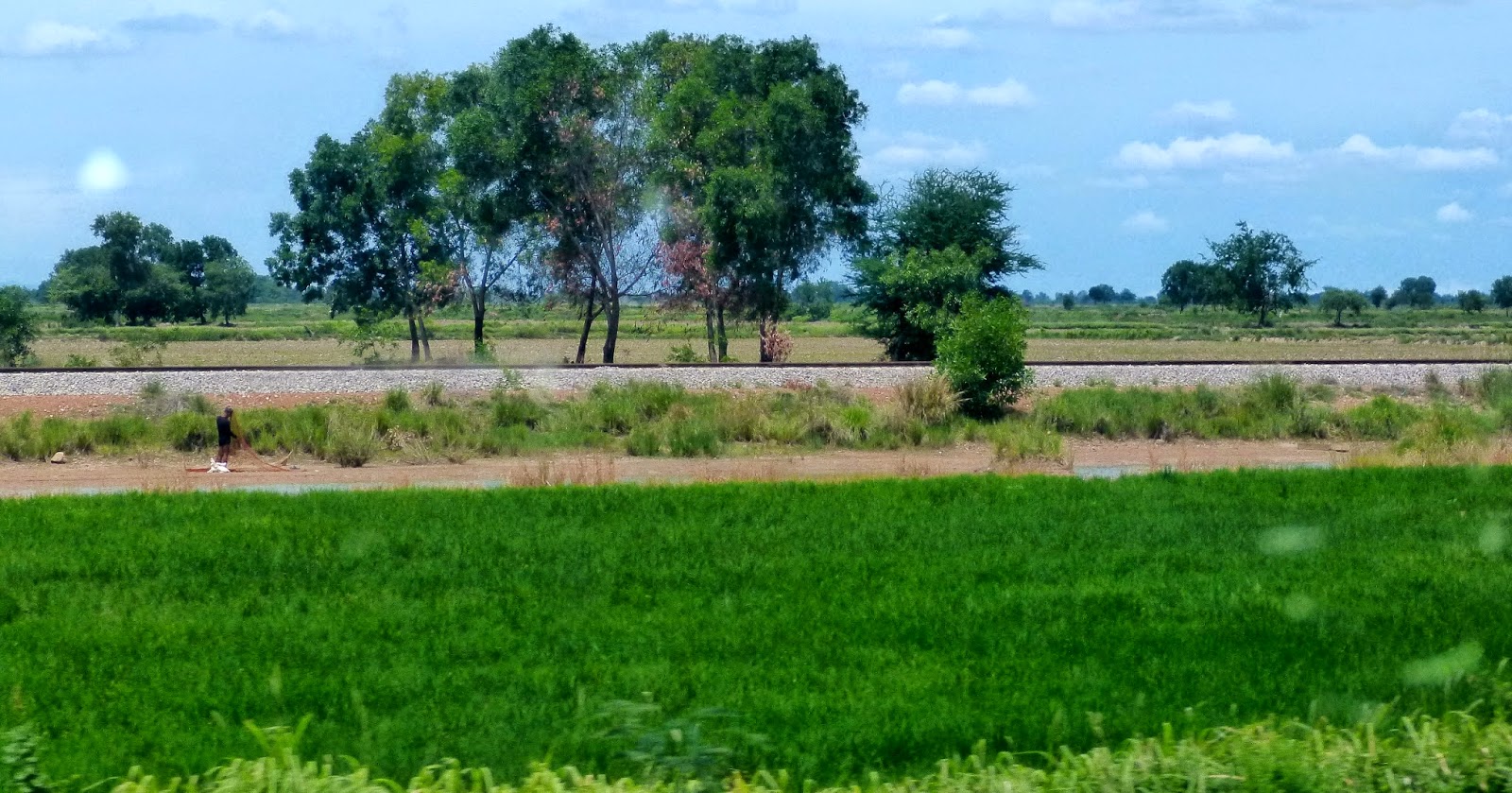 There are train lines in Cambodia and I suspect this one at one time went to Siem Reap. It would have been a much more pleasant way to travel. Cambodia does have plans to restore its rail system but I wouldn't hold my breath. One of the major long term problems for Cambodia is the result of the Khmer Rouge. They killed all the people with higher education as well as their families. This has to have affected the gene pool. 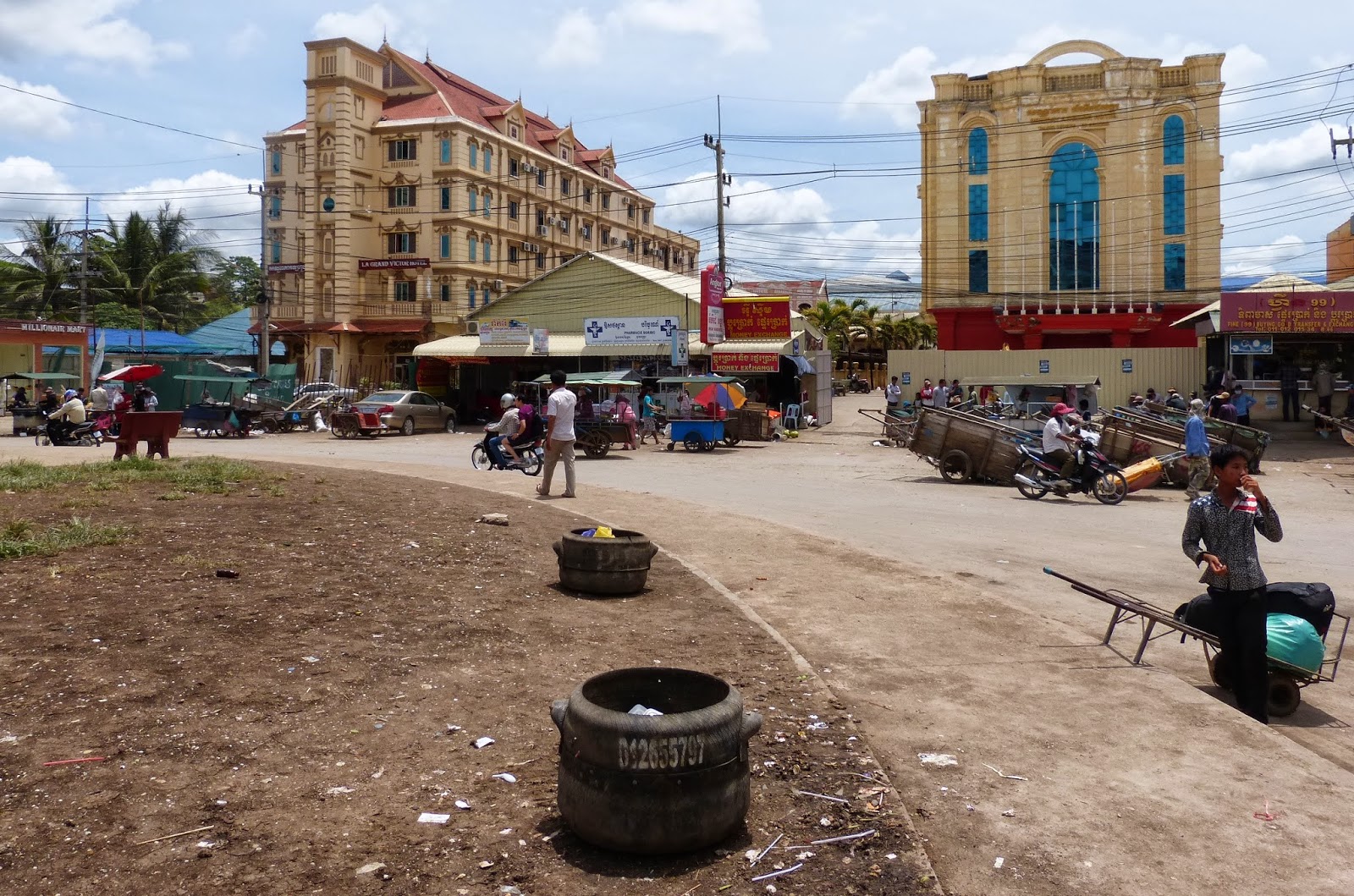 Poipet, on the border with Thailand. We had to get out of the bus and walk over with our luggage to a Cambodian passport check point where we were given permission to leave. Another photo was taken electronically. We then walked a hundred yards to the Thai border and into an air-conditioned building where I filled out another arrival / departure form. I did not have to wait too long in a queue and my passport was duly stamped. 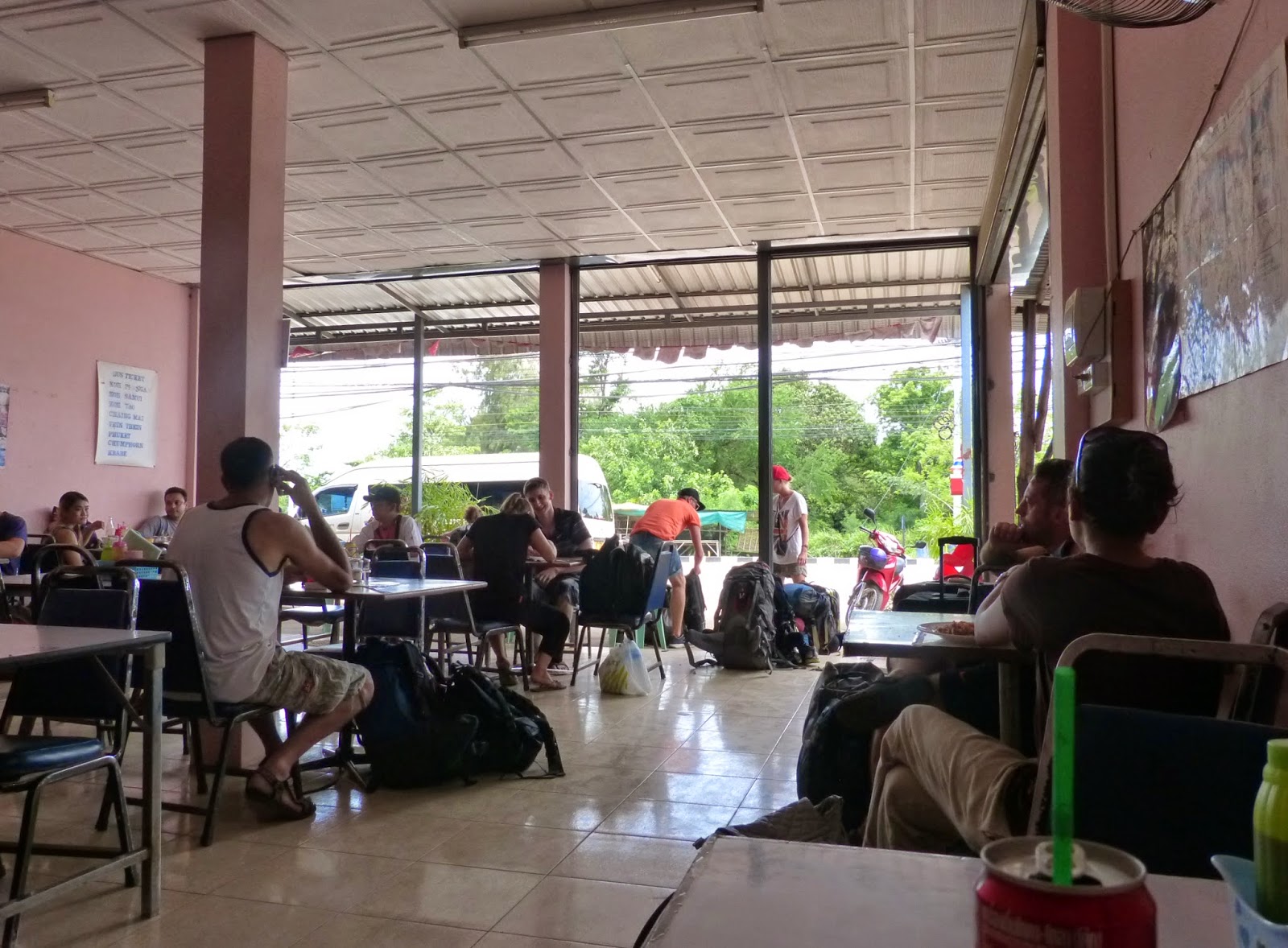 Next a few of us were loaded into a stretch tuk-tuk and taken to a restaurant where we waited over an hour. Some people had food. I had an ice-cream and some sort of soft drink.

Eventually, we were loaded into smaller vans and away we went. The Thai countryside is greener than the Cambodian and there are many more trees.

The roads were much better in Thailand. Four lane roads were common and they were building more. 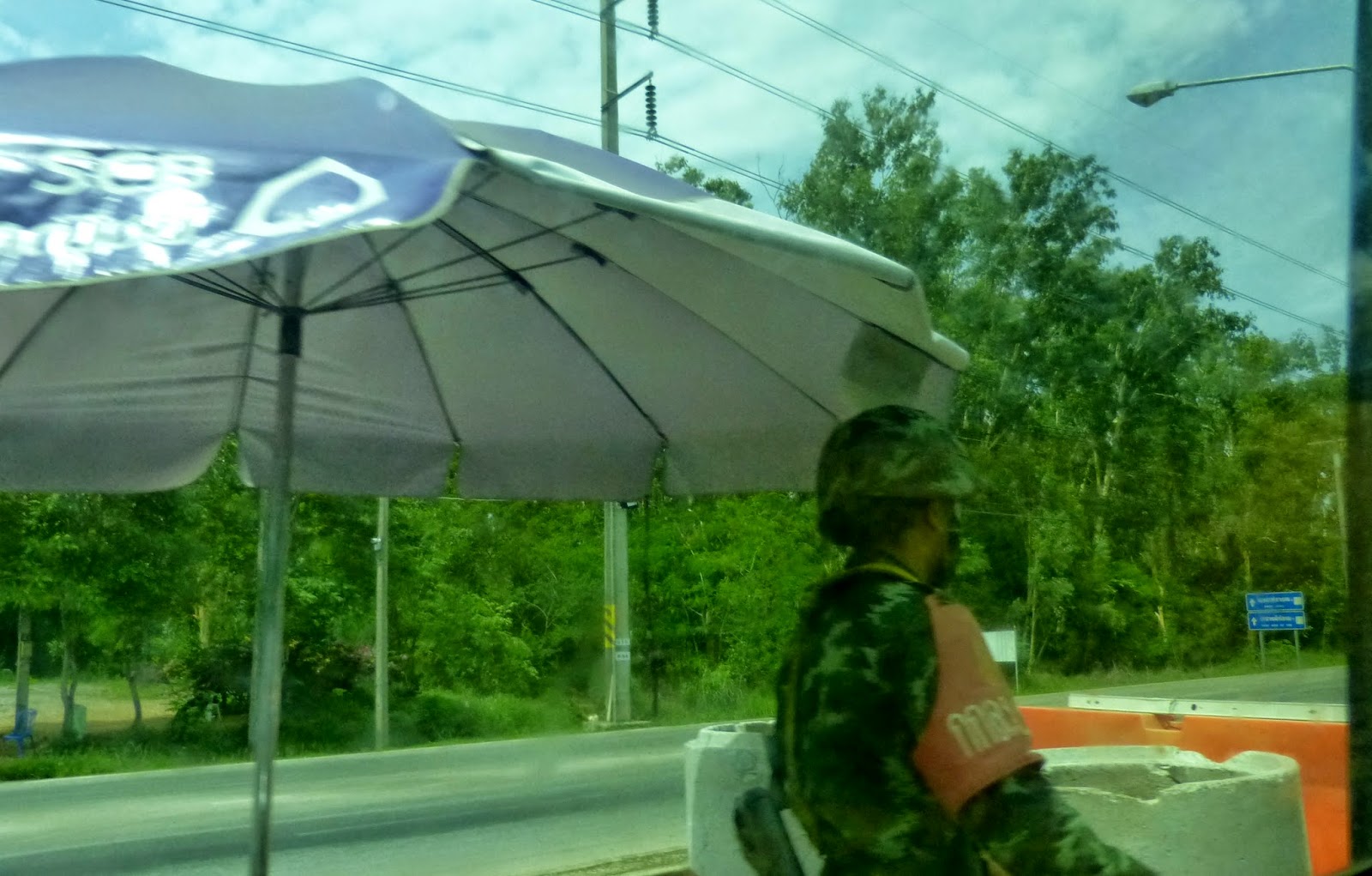 You may have heard about the political difficulties in Thailand and how the military have temporarily taken over. We went through four check points along the way but always we were just waived through. 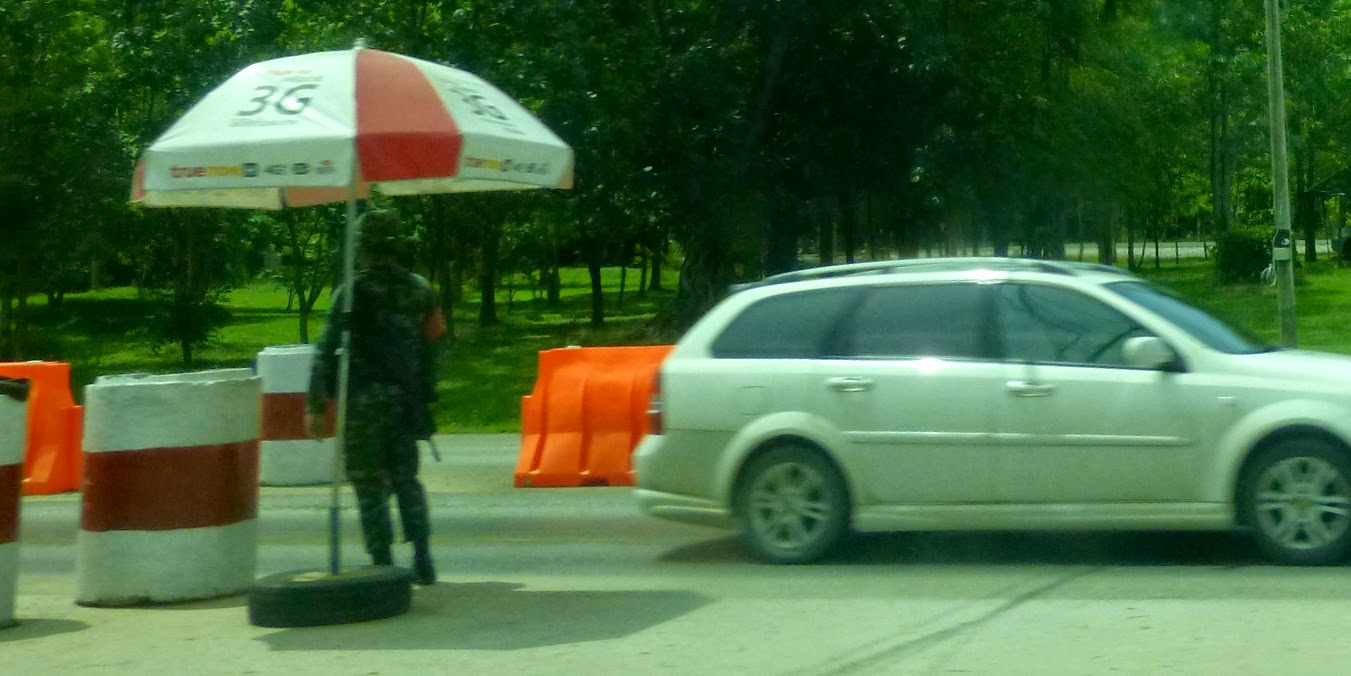 A large stadium in the distance, but it was out in the middle of nowhere. 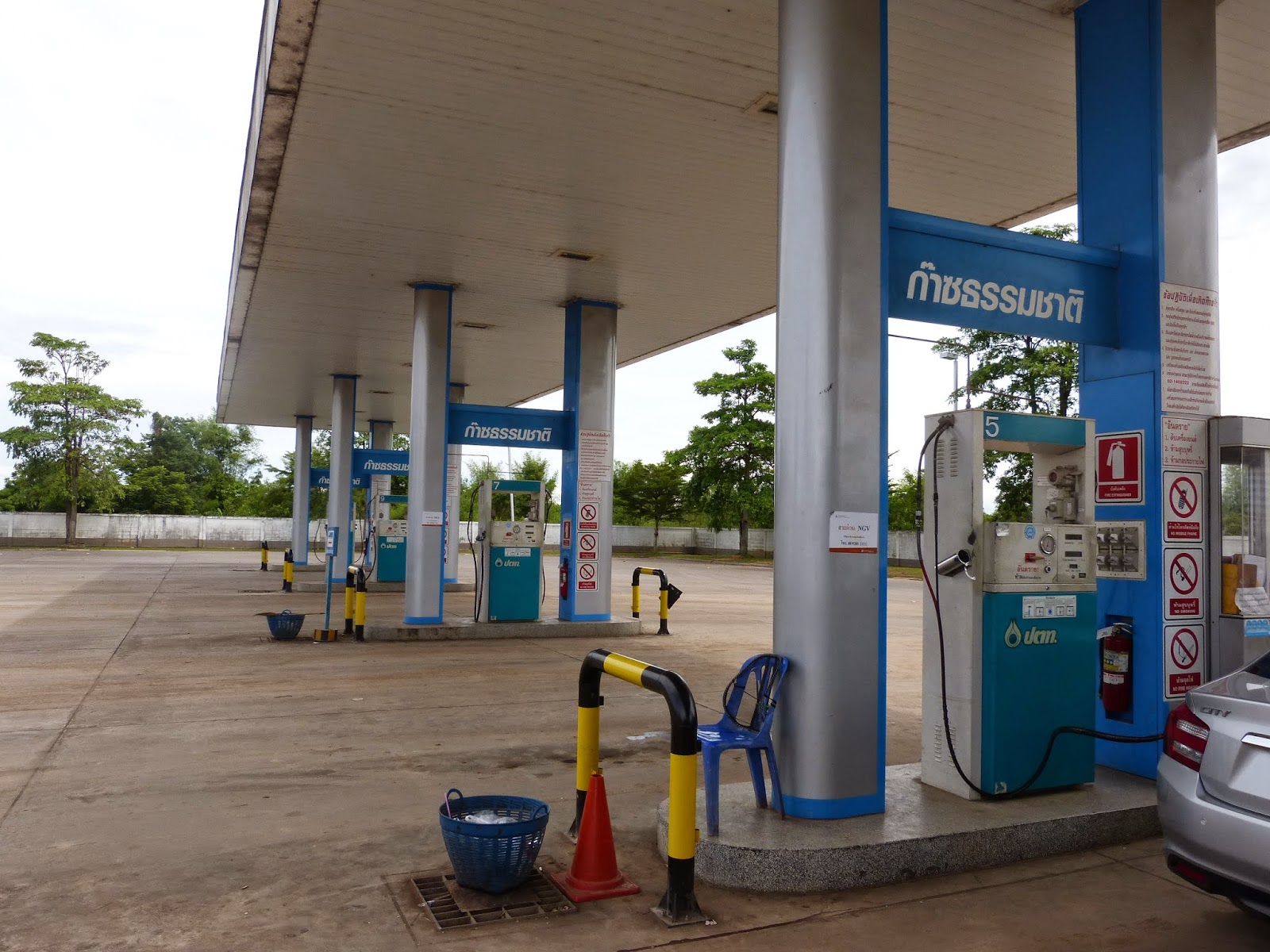 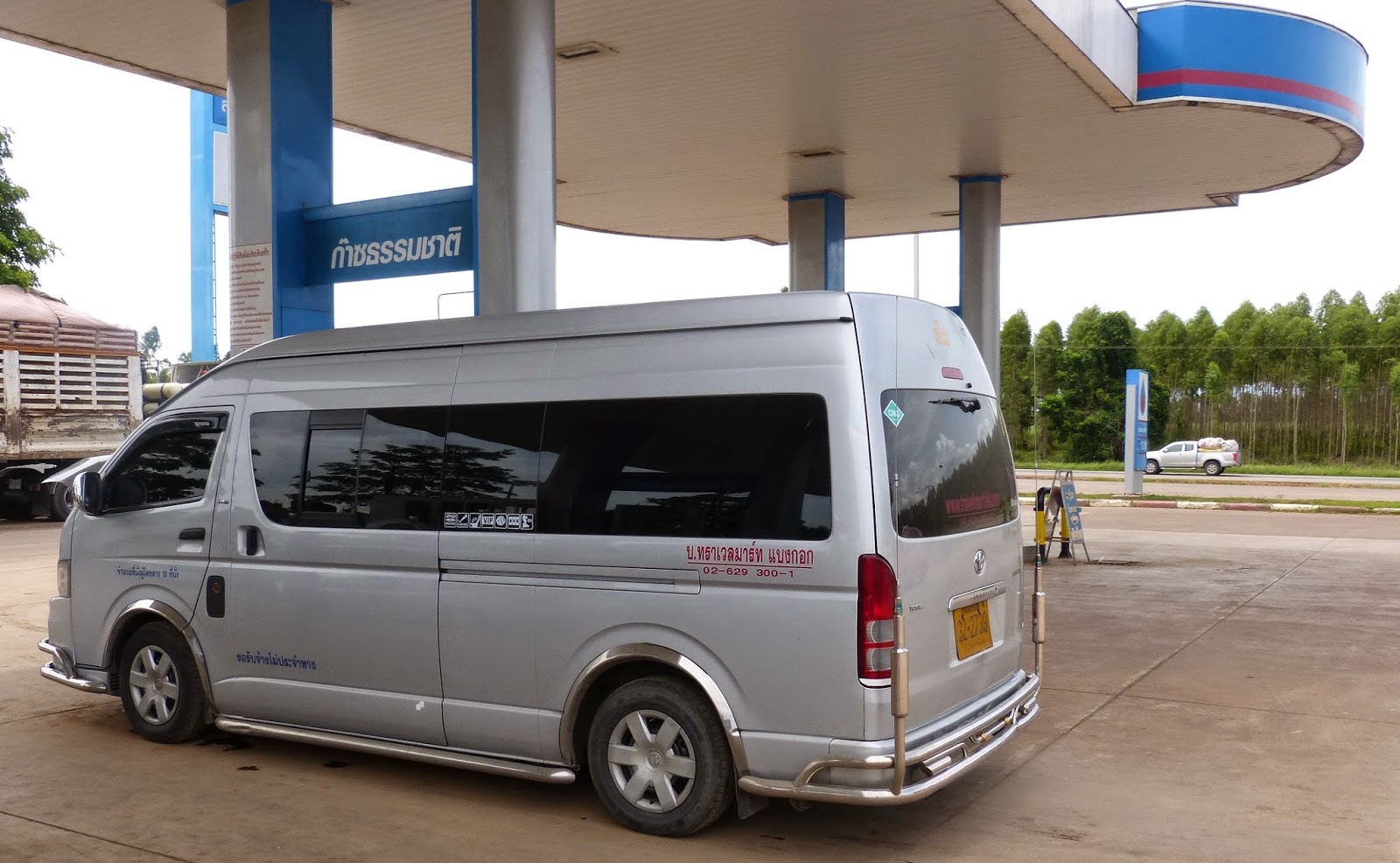 The van used LPG. You would not find a spiffy looking petrol station like this in Cambodia. Thailand is much more advanced. 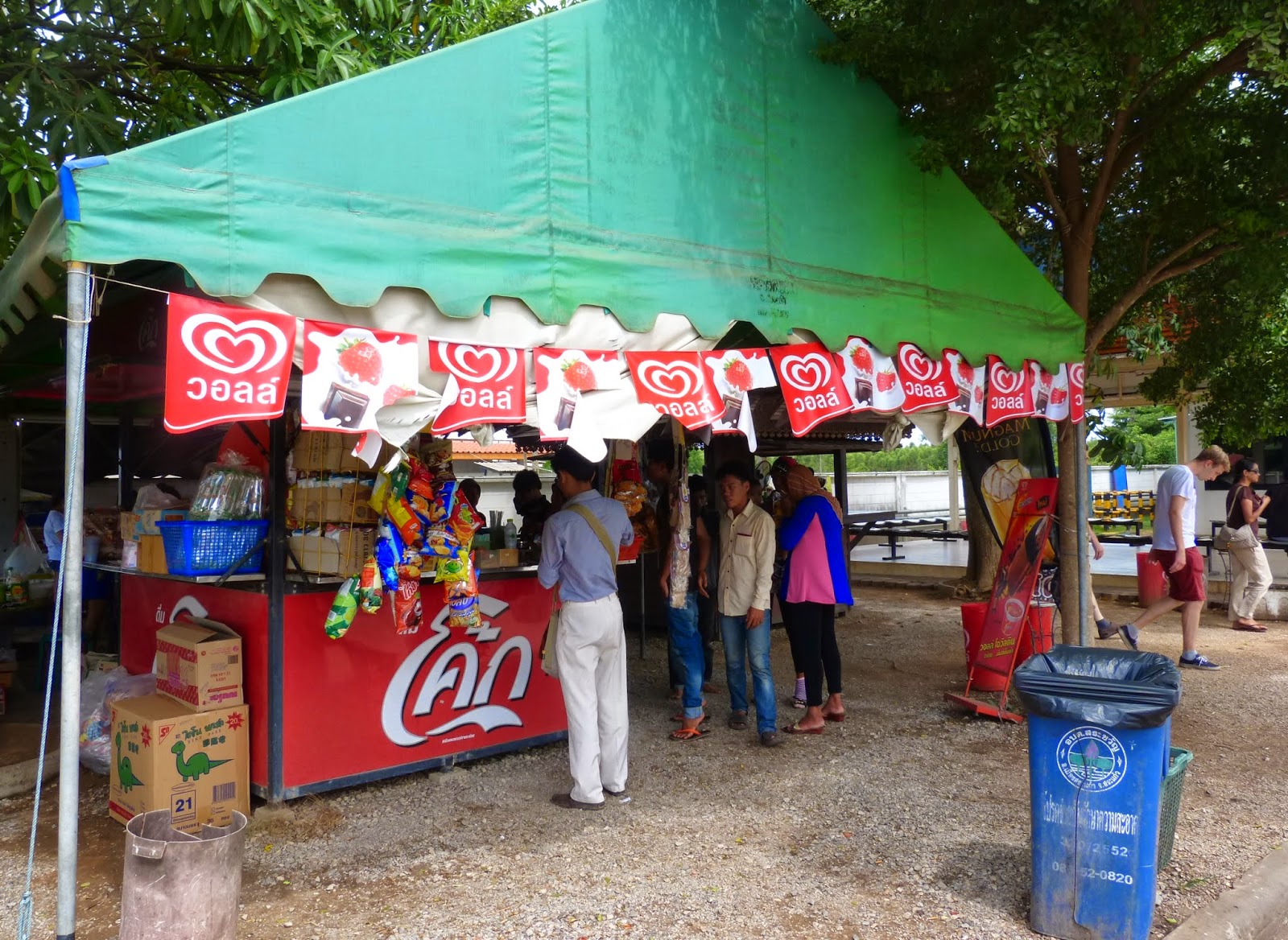 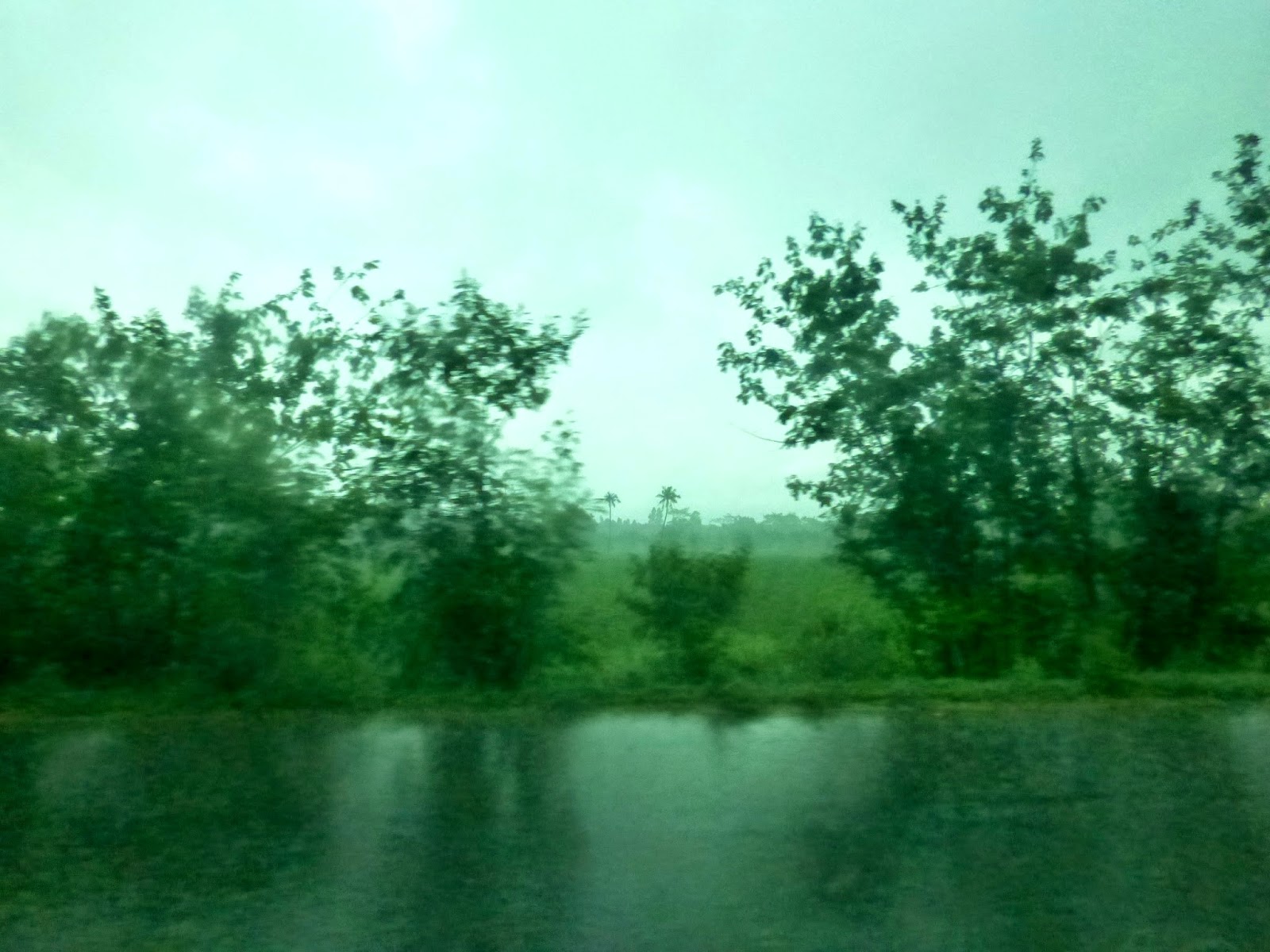 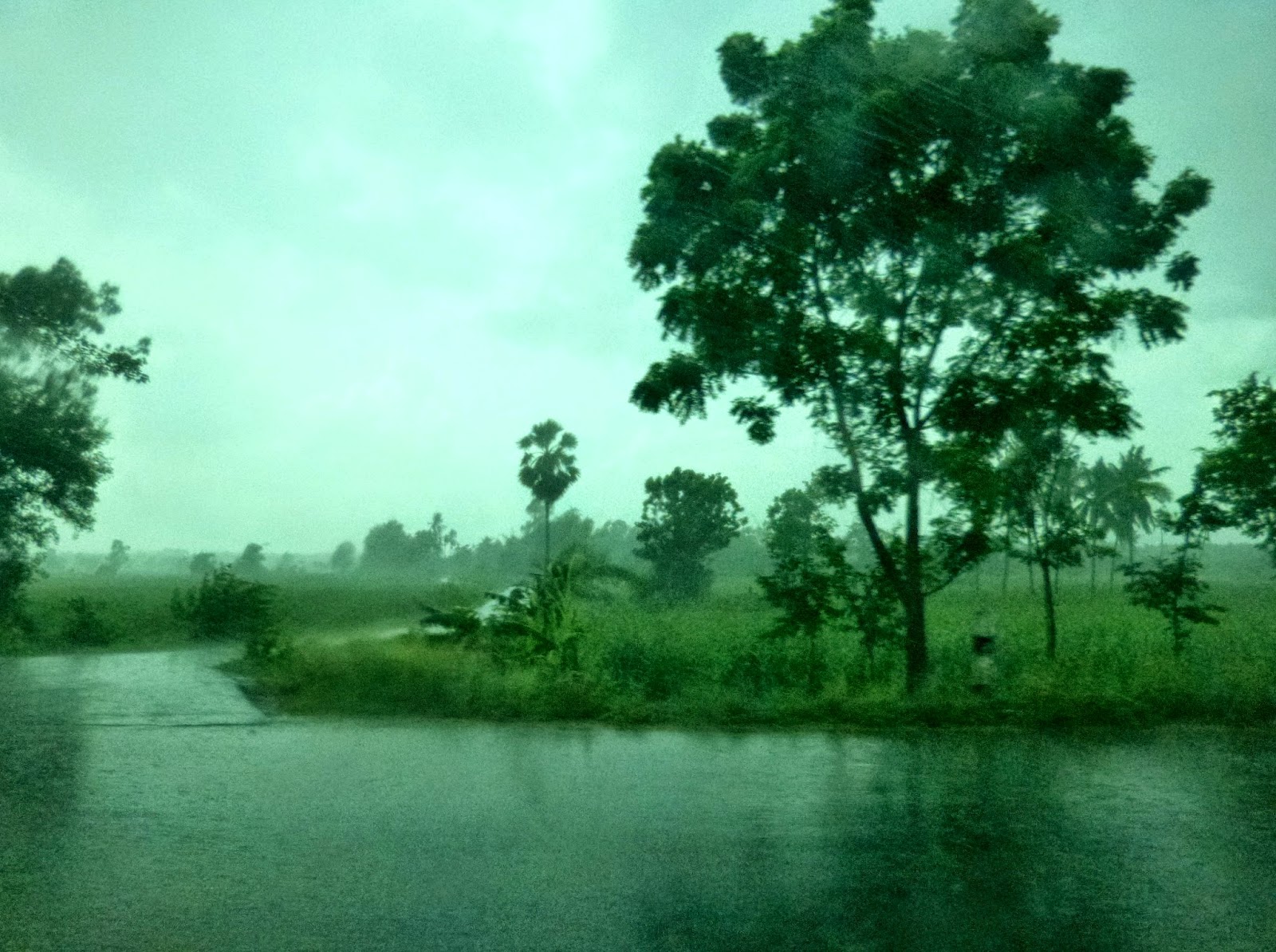 Rain poured down for a while.

The bus trip was supposed to take about 8 hours but actually took 10 and arrived at peak rush hour. There did not seem to be too much in the way of public transport near our arrival point so I took a taxi to my AirBNB where I was supposed to go to the food court at a Tesco Lotus. MY driver did not speak very good English and took me to the wrong Tesco. He agreed to take me to a subway station for the MRT and from there I took a crowded modern subway out to the station beside the Tesco Lotus.

I called my host on my cell phone that works world wide (Mobal) and he gave me verbal directions to the house. Soon I was inside at 7:30 pm and I liberated a cold beer from his fridge. I needed it.

I now wish I had taken the train but you just don't know.

My advice for bus travel in Asia is to get the most expensive bus you can for just a few dollars more. The key is to make sure that there is a toilet on the bus so that it doesn't have to make so many stops.