When I was about four years old, I lived in a city called Toowoomba which lies about 80 miles west of Brisbane. My mother took my sisters and I on a bus to visit a nearby attraction called the Bunya Mountains. Over sixty years later, I decided it would be a good idea to visit the mountains, the home of the Bunya Pine. 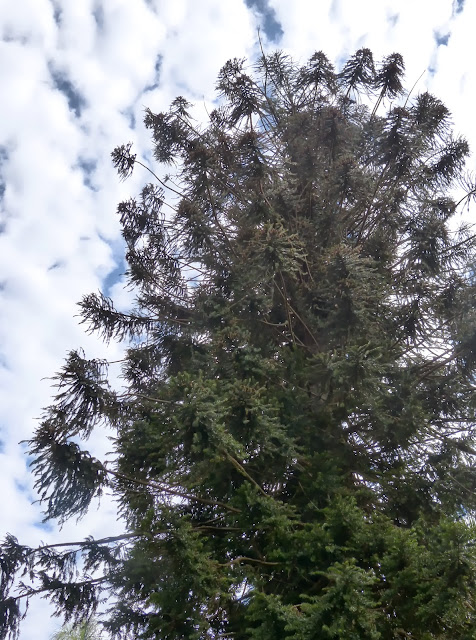 First, the Bunya Pine tree is not a pine tree but a member of the monkey puzzle tree. You can read about it here. 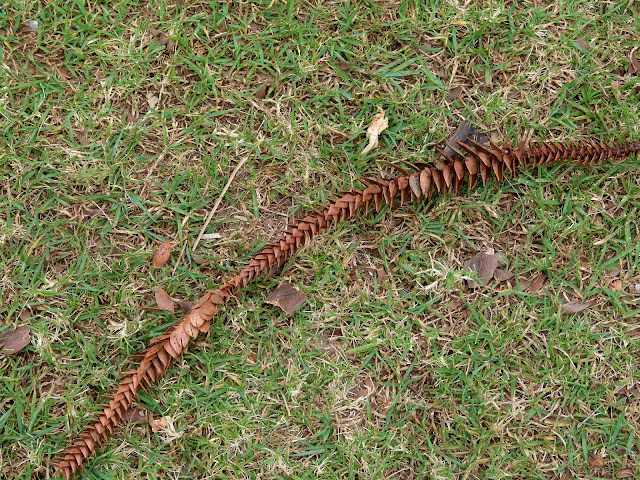 This is a leaf that has dried. The points are quite sharp and from experience I can tell you it hurts if you walk on one in your bare feet. The fruit is a nut that Aborigines eat. This particular tree is growing in the botanic gardens in Maryborough.

So we headed off south from Maryborough but after a while turned west to the town of Kingaroy.

The area around Kingaroy is famous for growing peanuts. The dirt is very red in this region.

The red dirt is very fertile. Since this area is inland it is much drier than the coast where sugar cane is grown in the red dirt areas. 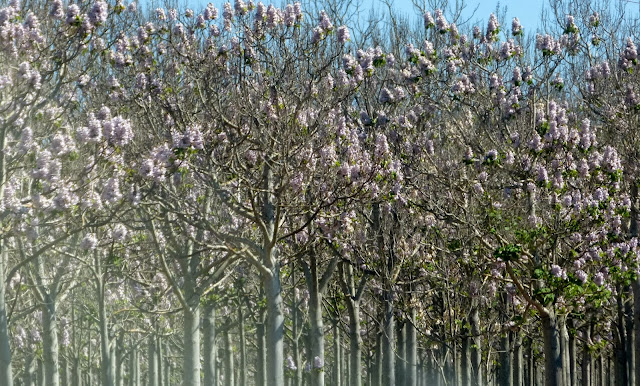 We have no idea what crop was being grown on these trees but they certainly were in bloom. 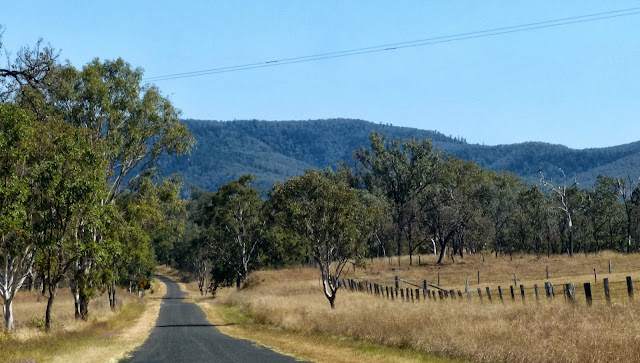 After a pie for lunch we headed south to the Bunya Mountains which is an isolated section of the Great Dividing Range that runs along the eastern Australian coast.. 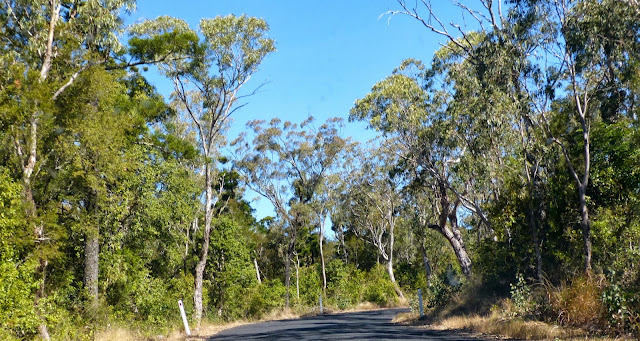 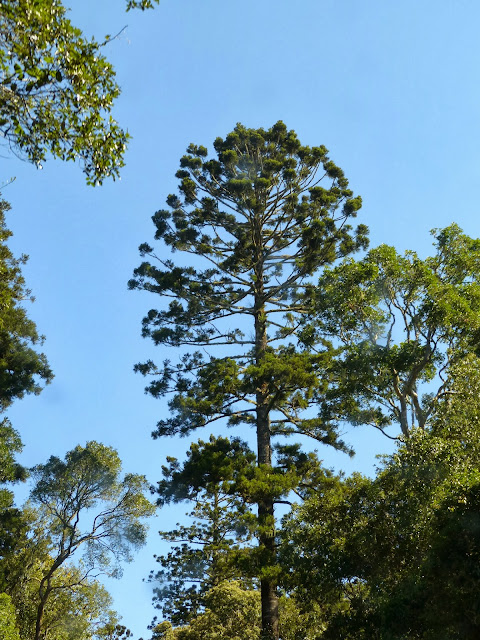 As we started to climb the mountain range, the distinctive Bunya trees became plentiful. Years ago, the mountains were an annual meeting or vacation destination for aboriginal tribes from hundreds of miles around. The main attraction was the nuts that ripened at that time of year. 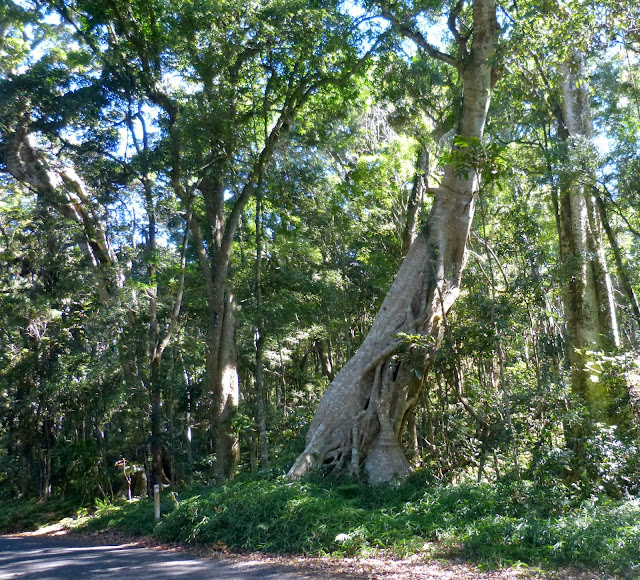 The bunya trees seemed to grow at a certain elevation and the rest of the mountains were covered with the usual gum trees and rain forest. 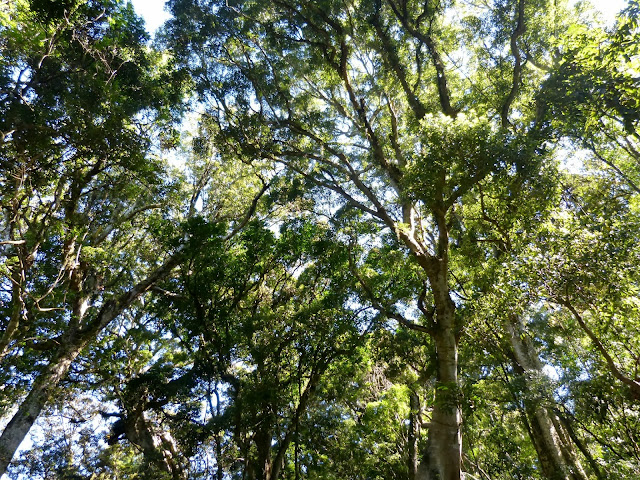 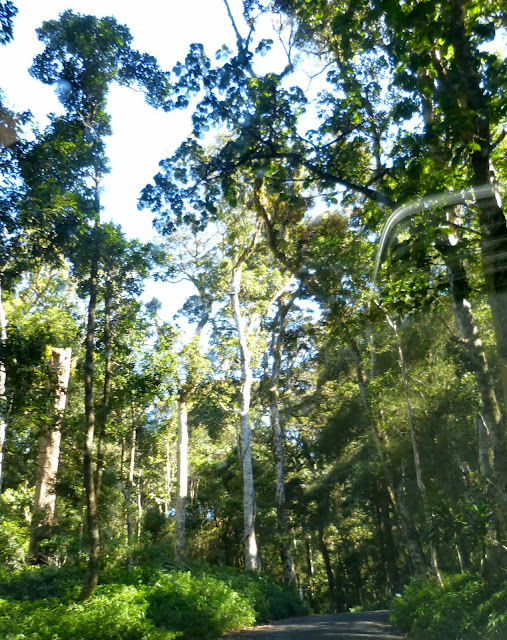 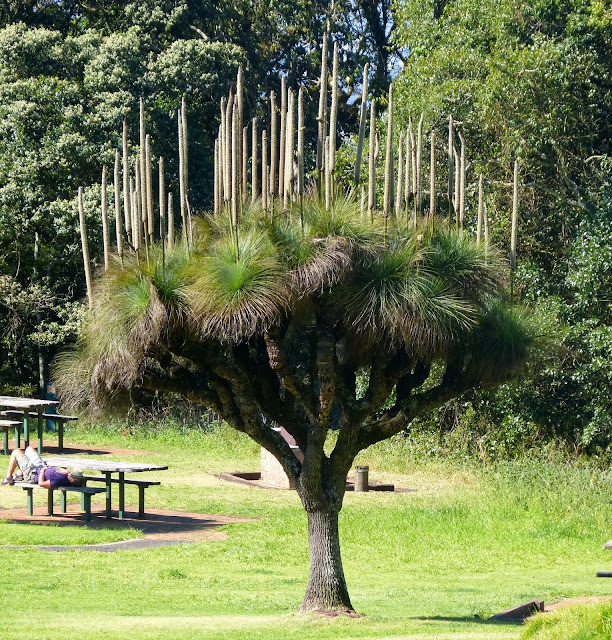 We stopped at a rest area / lookout where there were some grass trees. 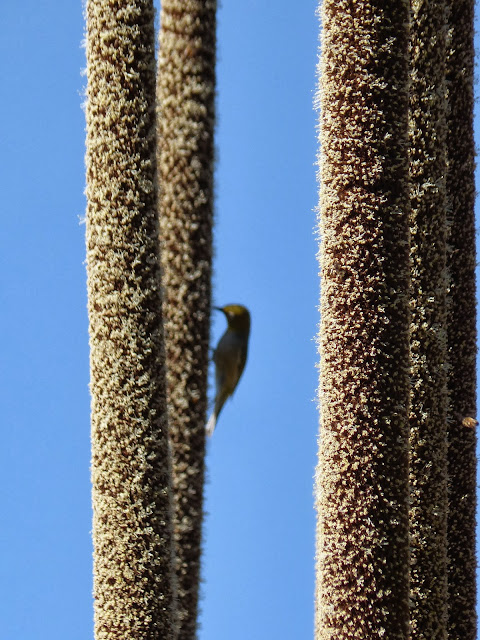 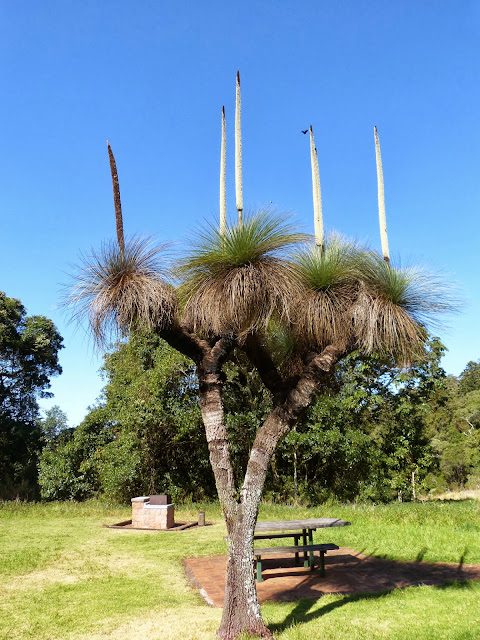 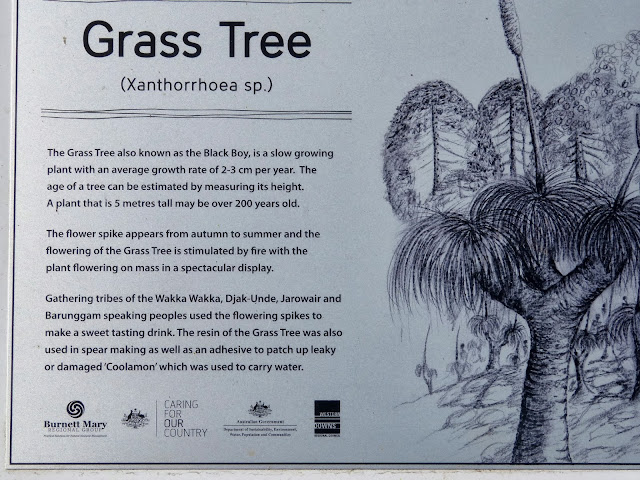 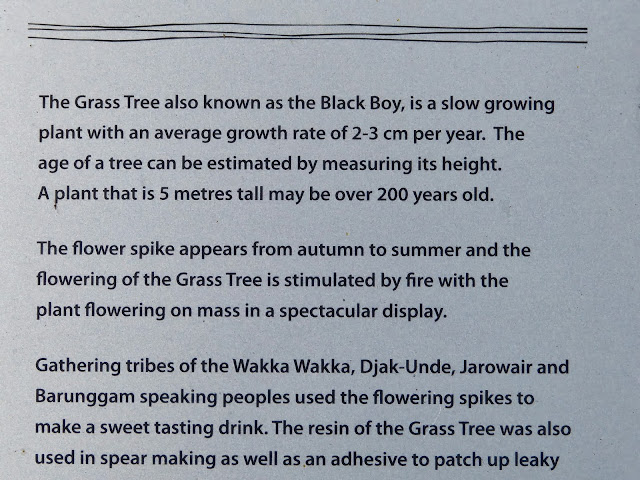 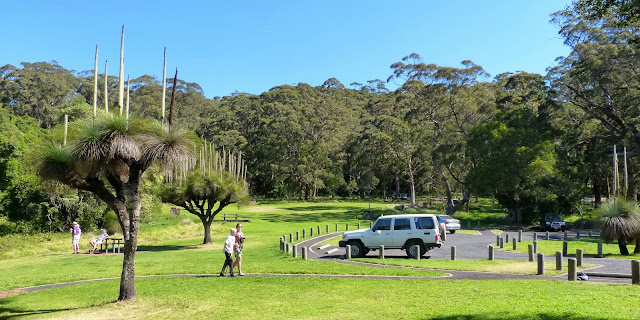 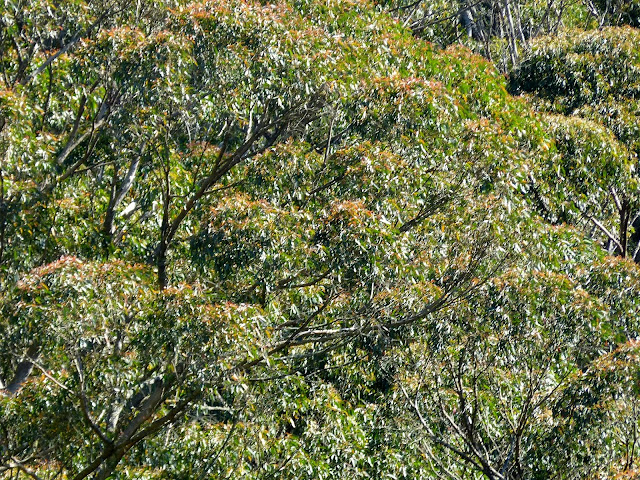 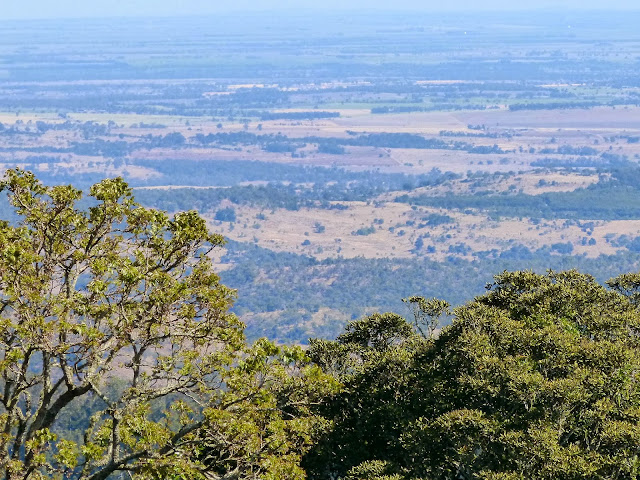 Heading further south we started to descend on to the plain of the Darling Downs. 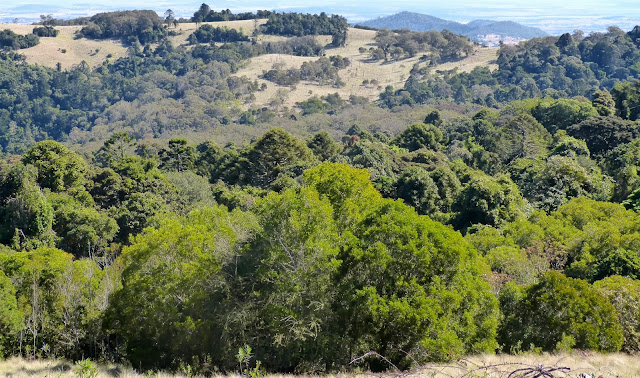 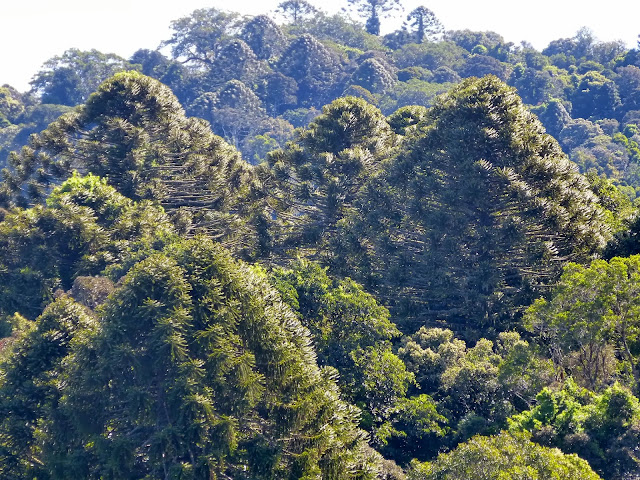 The tops of bunya trees in a valley below the road. They are enormous trees and though they are not as large, they reminded us of the redwoods we are seen in Oregon. 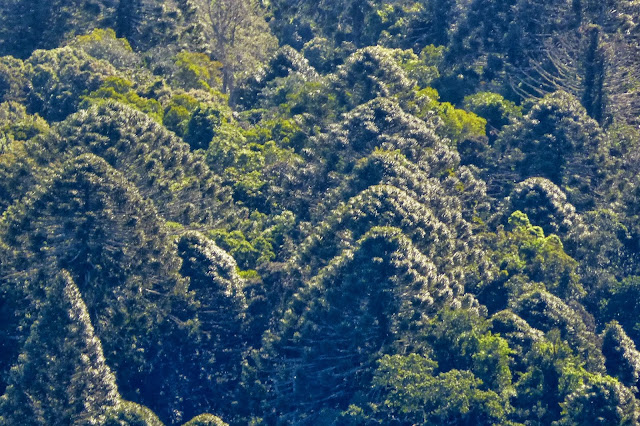 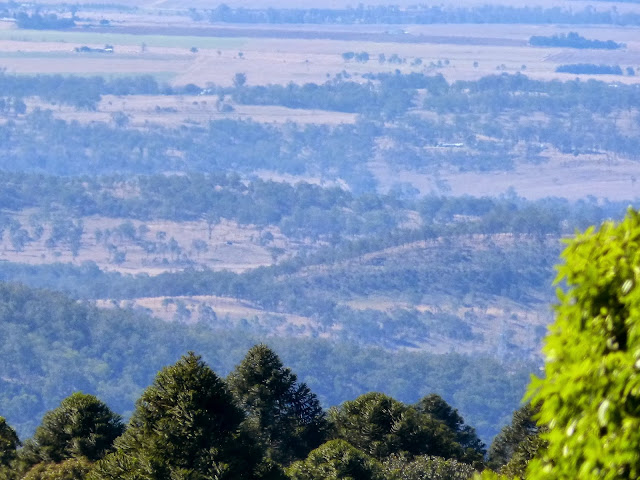 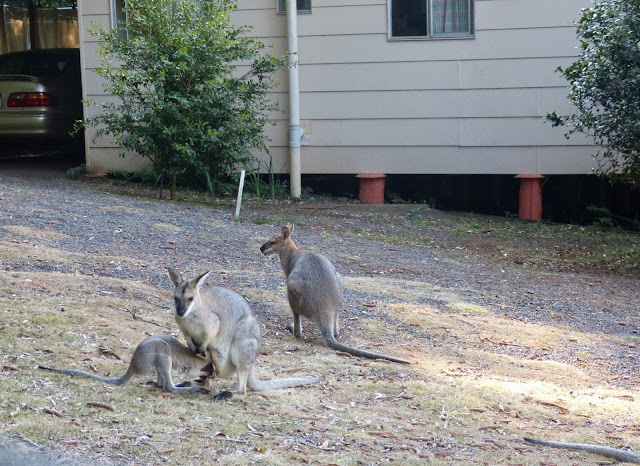 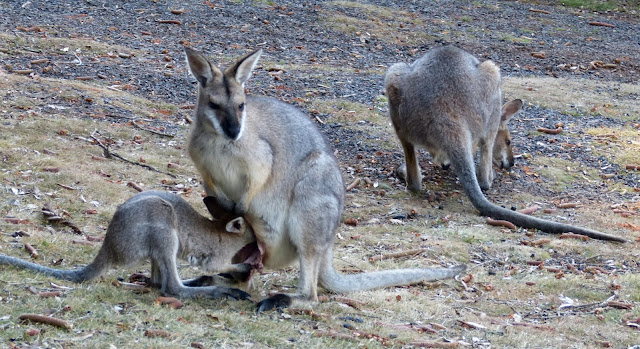 You obviously needed some kangaroo photos as a change from the trees. 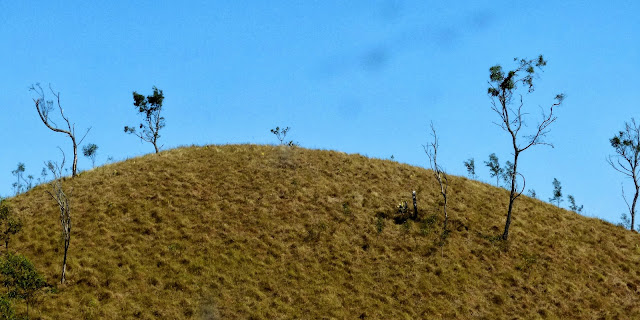 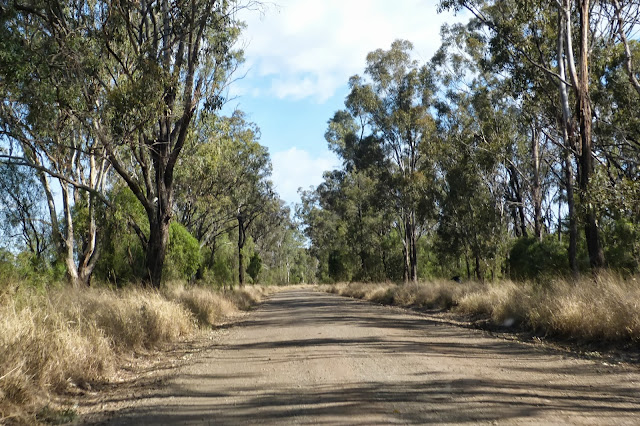 The quickest route to Toowoomba took us on a dirt road. I don't feel like I have truly experienced Australia on a trip until I drive on some dirt road.

The Darling Downs. It is one of the best agricultural districts in Australia. 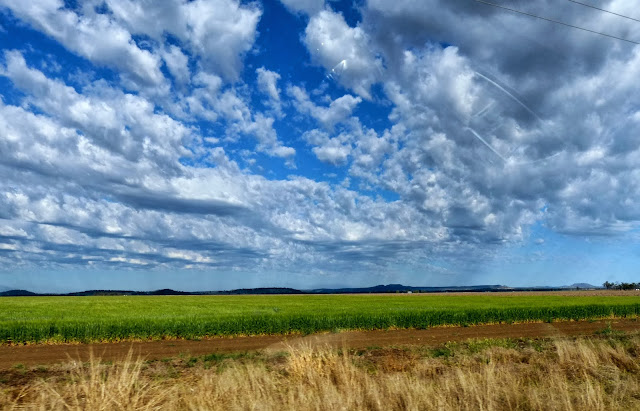 I was pleased that we took the detour from our usual route between Maryborough and Toowoomba. Next time I will try to do this again.