Most of you know that I love to take trains. If Argentina did not have some trains, I would not have come here. 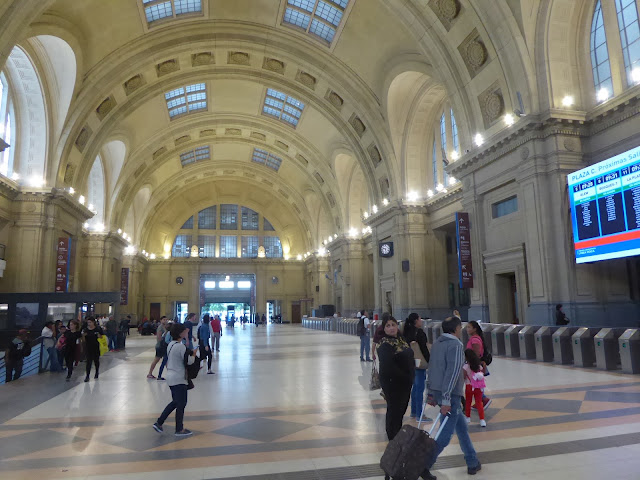 I have included the photo again of Constitution Station in BA because other people might find this blog entry. If you are planning to take this train, you don't go through the ticket machines on the right. Instead, you go all the way down to the far end of the hall on the right and there is a special waiting room for long distance trains. Your ticket and identity (passport) will be checked and then again when you get onto the platform. 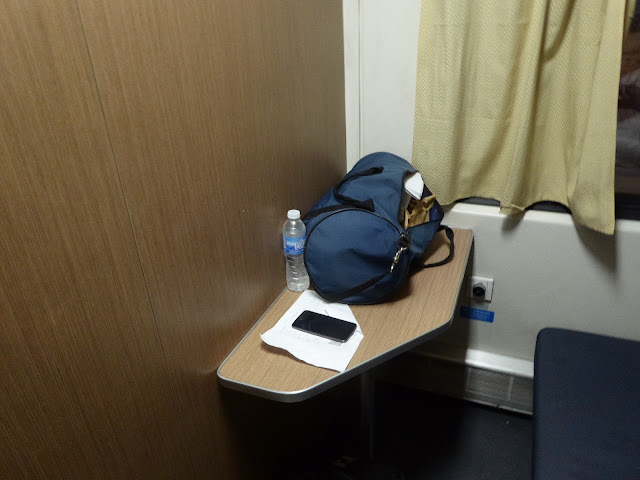 The sleeping carriage (101) is at the far end of the platform and the train has many carriages. The carriage attendant was friendly and helped me with my baggage to my compartment which I had to myself. Incidentally, I had no problem using the website suggested by Seat61 to buy my ticket using a Visa credit card. You might get a confirmation call from Visa.

There is a small table to put your stuff on. 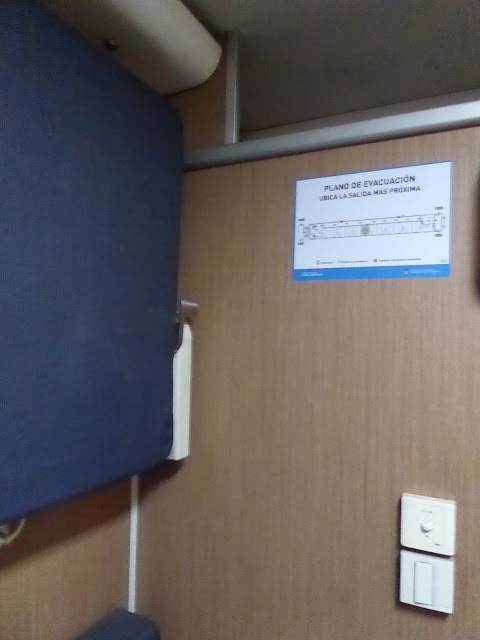 Since I was the only passenger in the compartment, the upper bunk remained vertical. 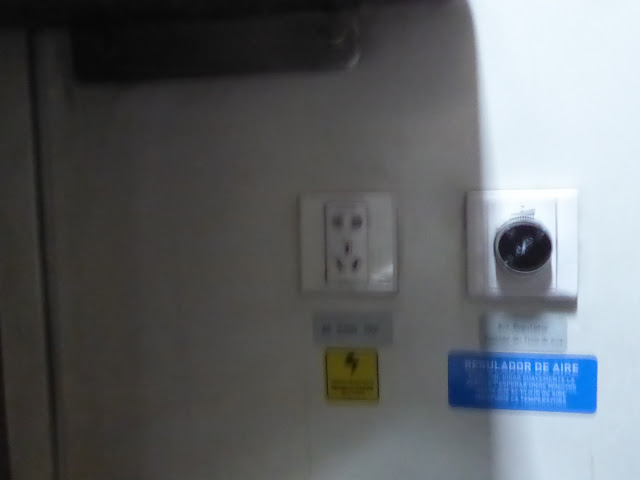 On the left is a power point where you can charge your cell phone. The knob on the right is for the level of heat/cooling but it did not seem to make much difference. 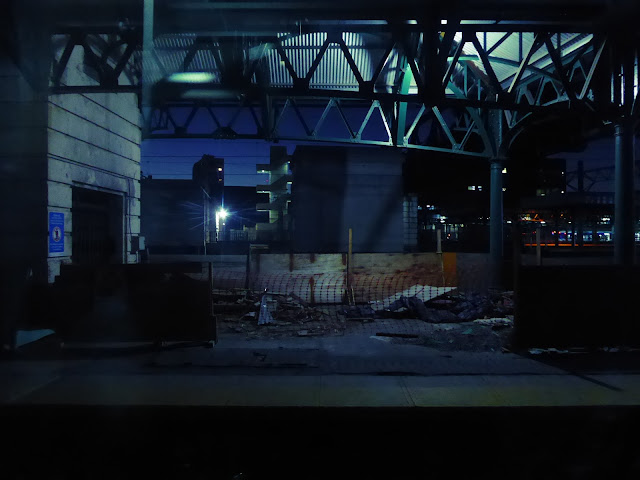 The dismal gloom of the station platforms just before we left. The train left on time. 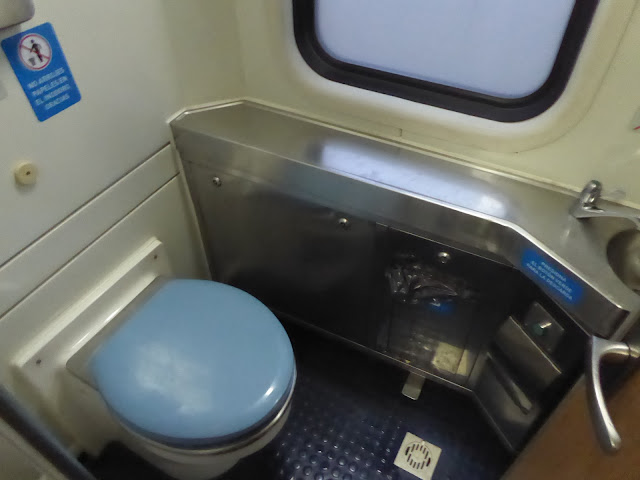 The toilets remained clean throughout the trip. It is an aeroplane style toilet that makes a whomp noise when flushed. 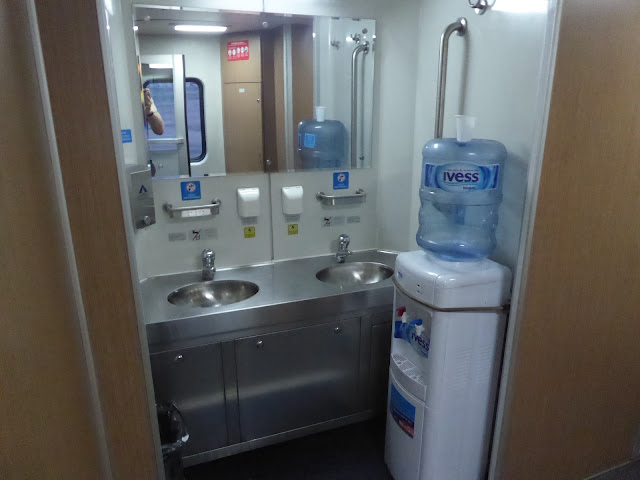 Sinks as well as hot and cold water. 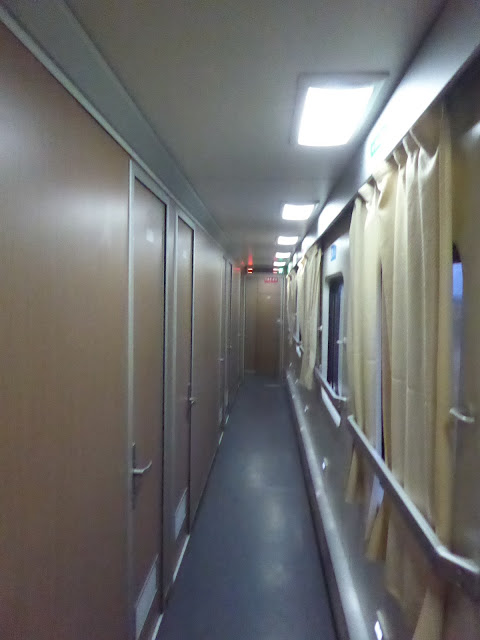 Corridor. The chief conductor came around and checked the ticket/passport again.  A couple of food vendors also appeared but I was not hungry.

Since the carriage is close to the diesel engine the blasts on the horn were quite noticeable but once I got to sleep, I slept soundly. The beds are hard and remind me of the tables where I get physiotherapy. Pillow, sheets and blanket are supplied. The carriage is quite clean. If I had a choice between an Amtrak roomette and this compartment, I would take the Argentina compartment. It has much more room for two people.

The train speed is usually about 50 mph but does slow every now and then. The joints in the track are noticeable but not as bad as in some countries. 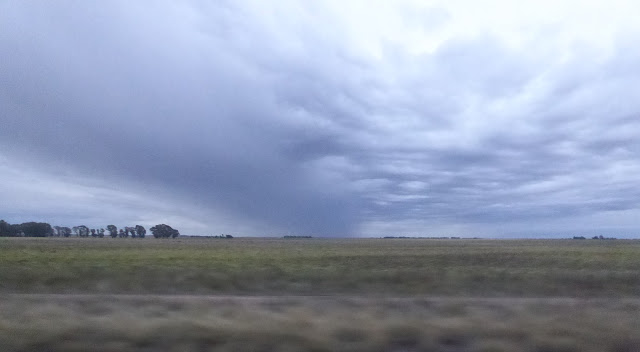 I woke about dawn to see a flat landscape. 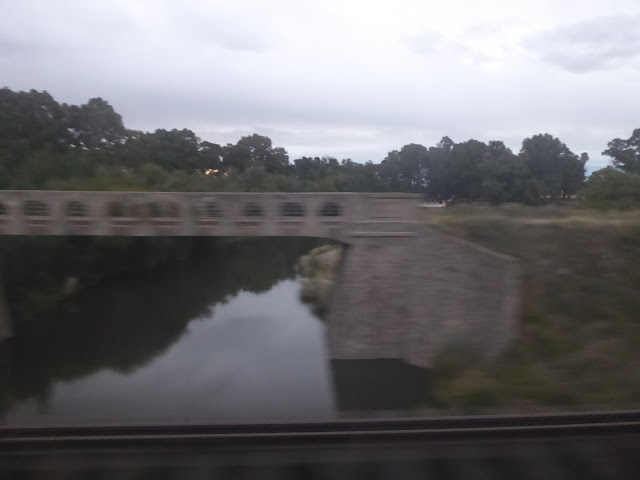 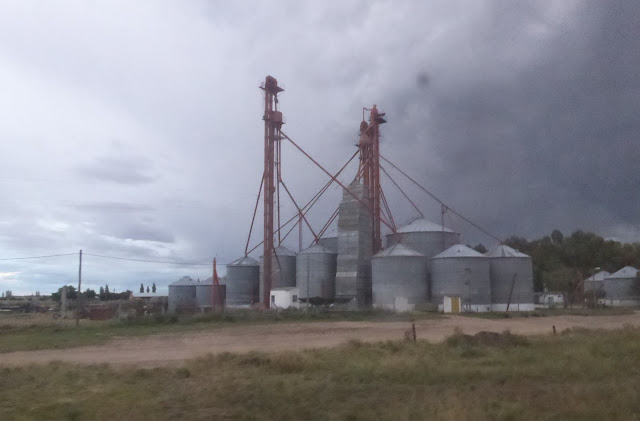 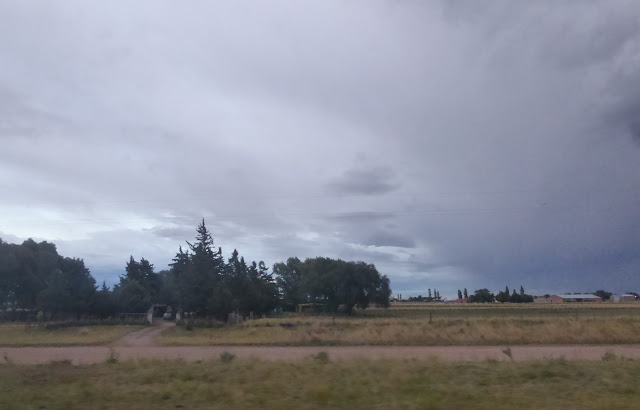 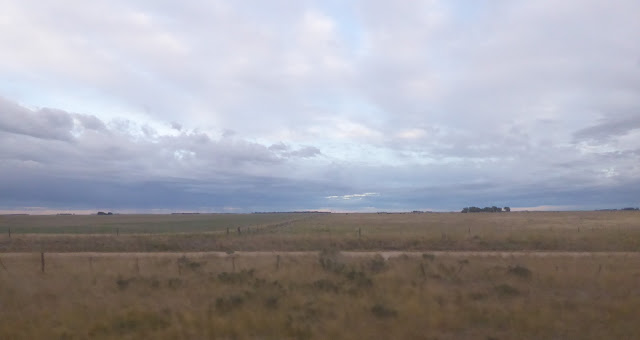 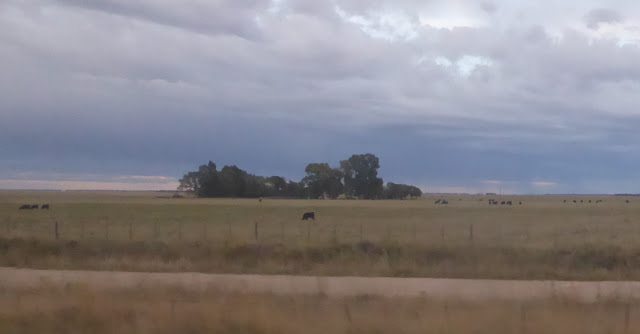 Argentina grows a lot of beef and I suspect a lot of it comes from this area. There was plenty of grass for the cattle. 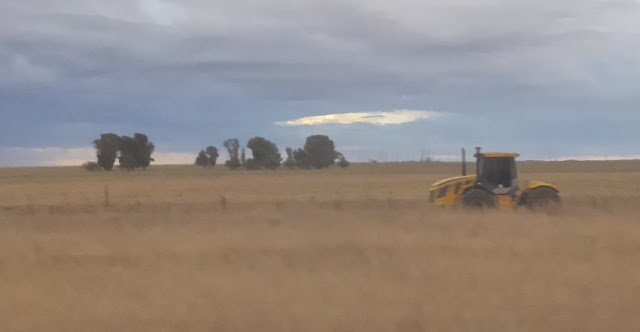 A tractor made an appearance. 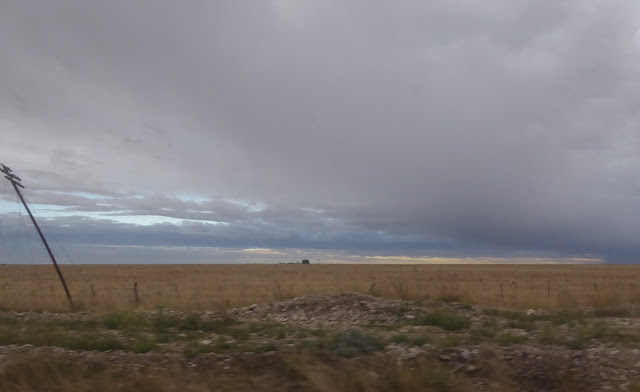 Eucalyptus trees reminded me of Australia.

The outskirts of Bahia Blanca. 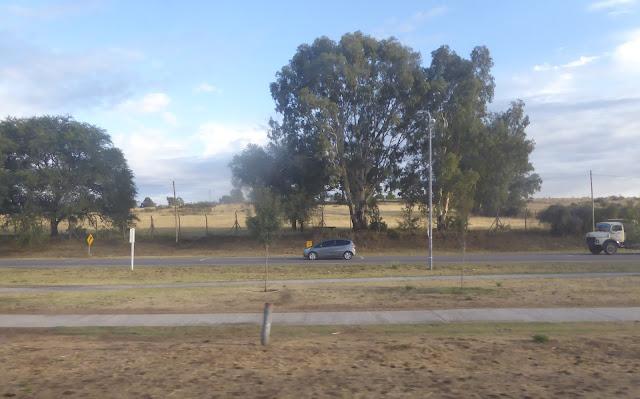 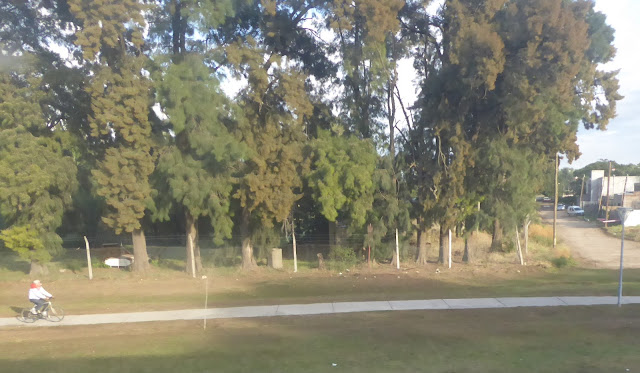 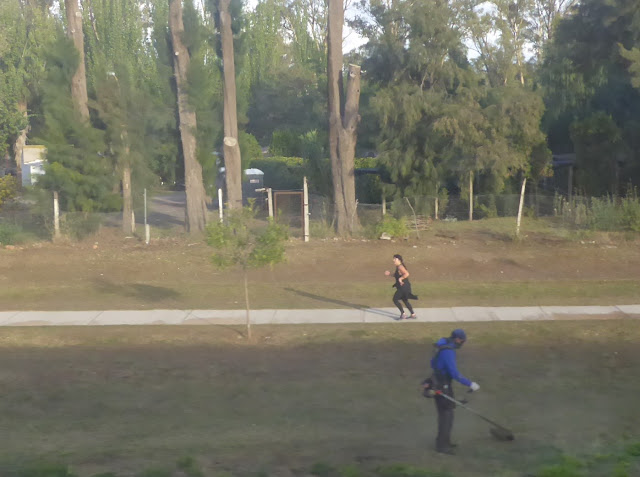 Exercise path that was well used. 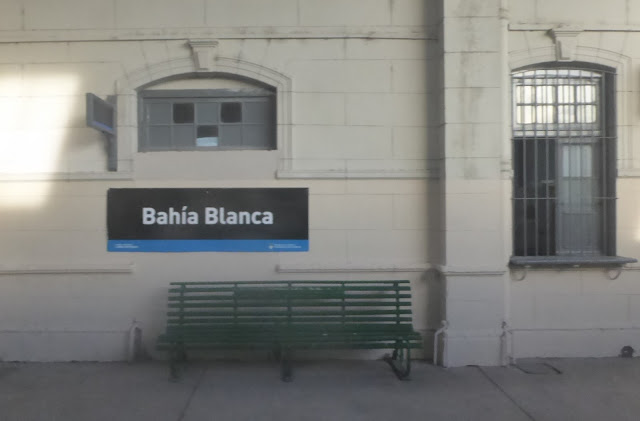 The train pulled in on-time. 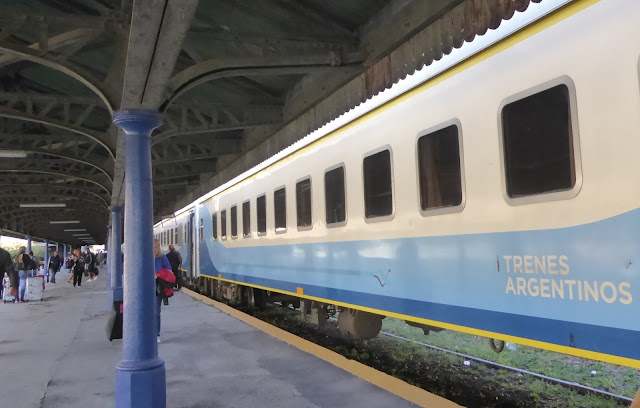 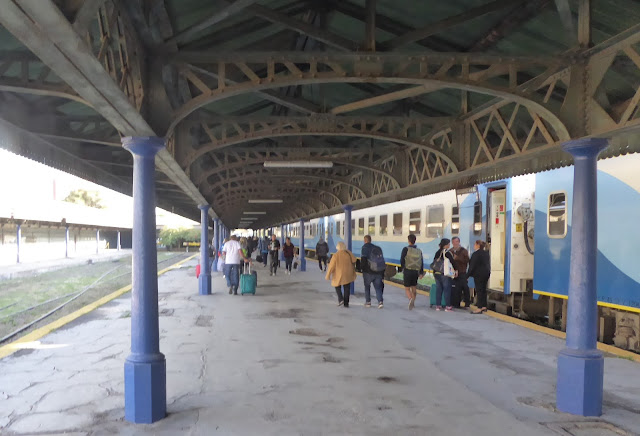 It was a long trudge back to the entrance where I took a taxi to my hotel in the town centre. Cost was about US$ 3. 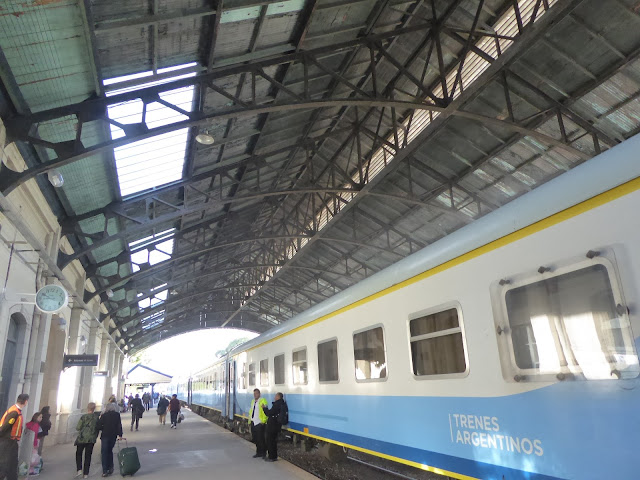 So no magnificent scenery, but a pleasant enough and inexpensive train ride.