Since the hotel was across the road from the river, I decided to go for a walk along the bank and also to have lunch at a place I had found on-line. 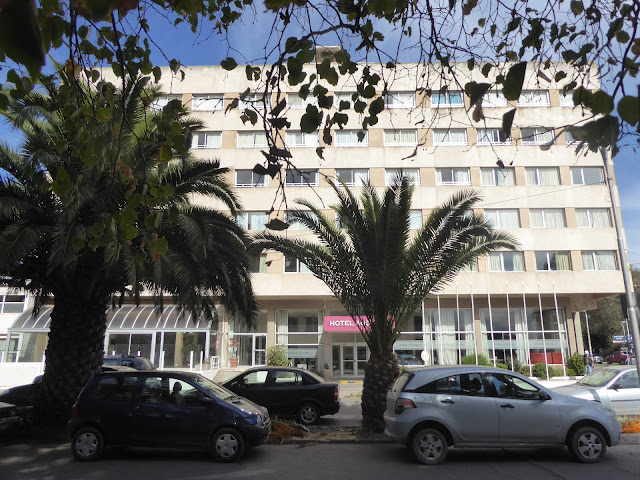 It was a modern style hotel (Austral) with shoe-box rooms but quite comfortable. Curiously, they don't provide glasses in your room. Not even plastic ones. It wasn't just me, various reviews mention this curious practice. 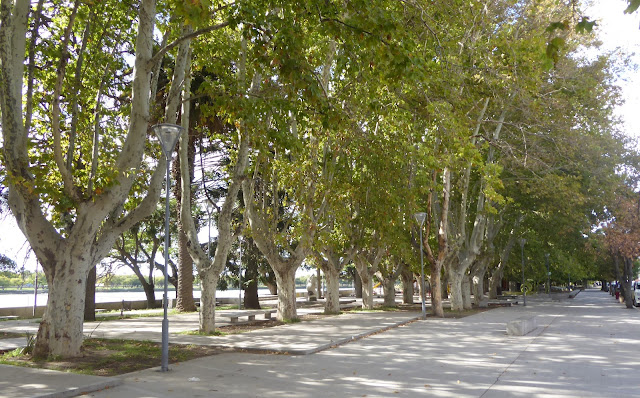 Viedma has made the river bank very pleasant with all the trees. 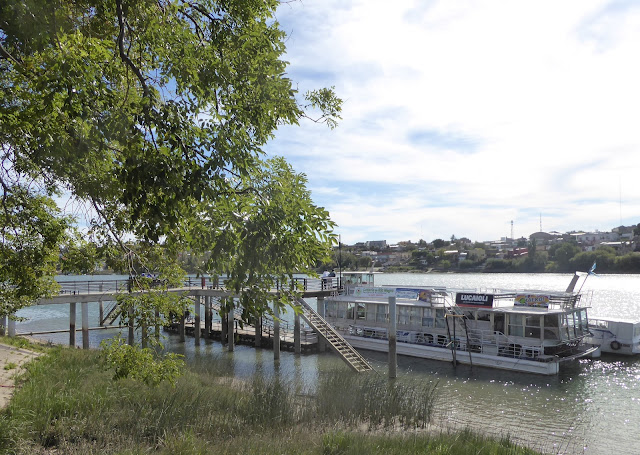 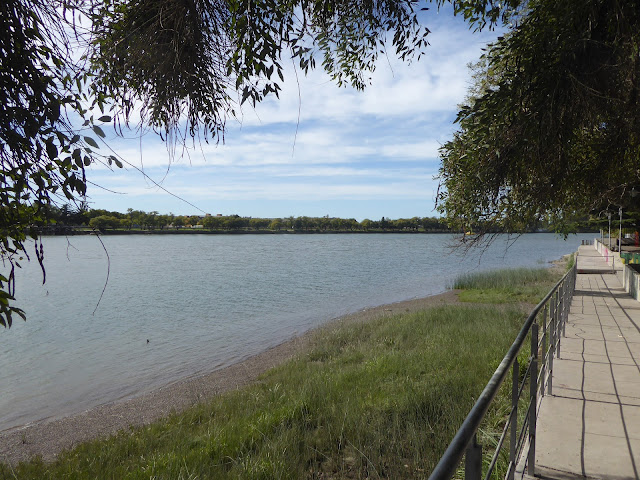 It's called the Rio Negro (black river) and is more of a greenish colour. 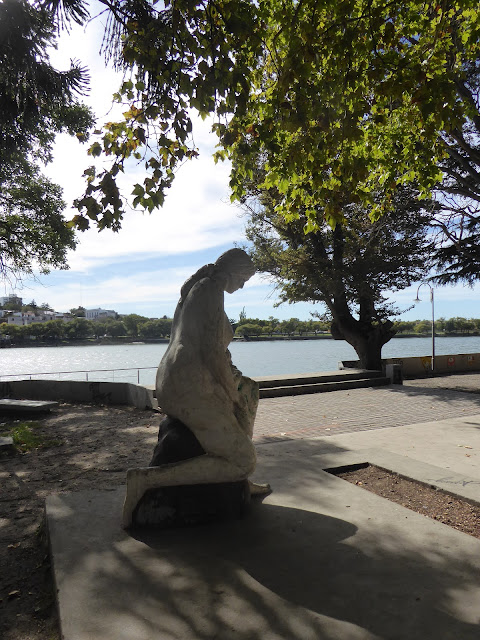 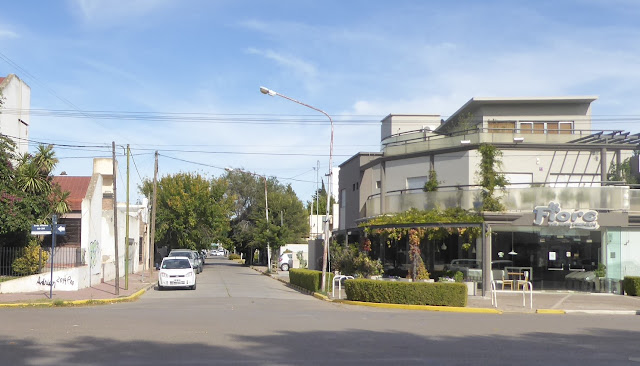 One of the streets leading away to the center of town. It's only a couple of blocks away to the main street of Viedma. 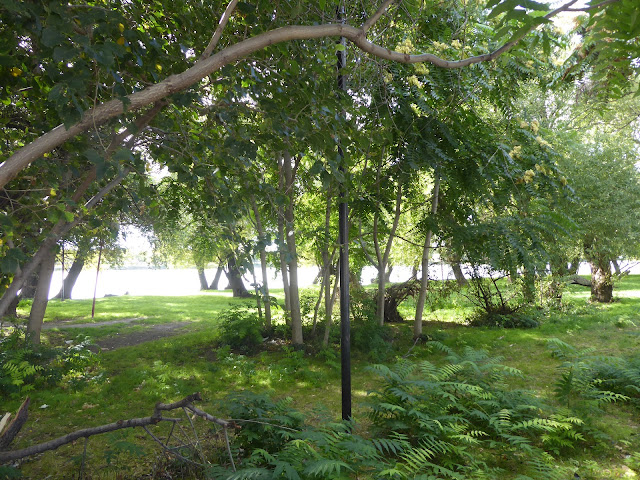 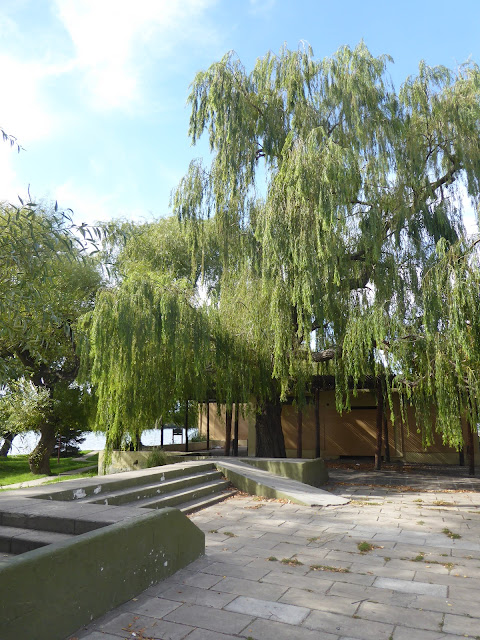 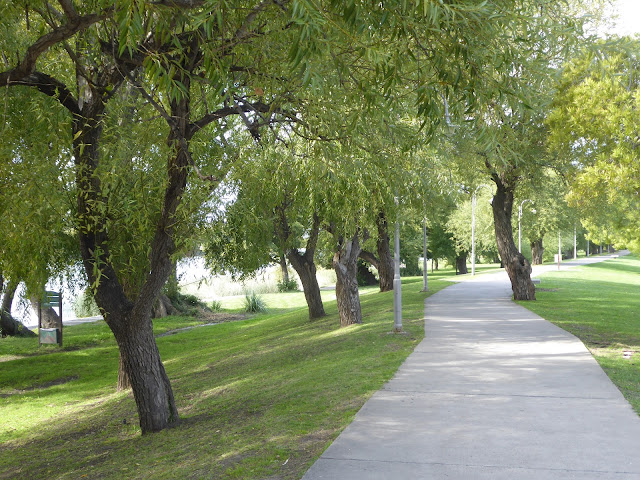 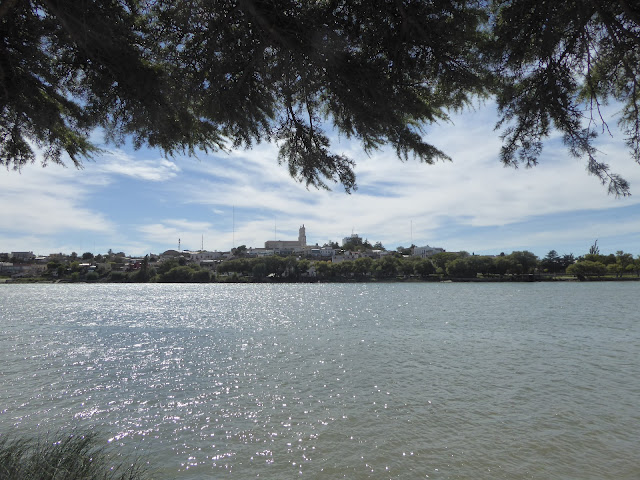 The town of Carmen de Patagones on the other side of the river. The train from Bahia Blanca used to terminate here. 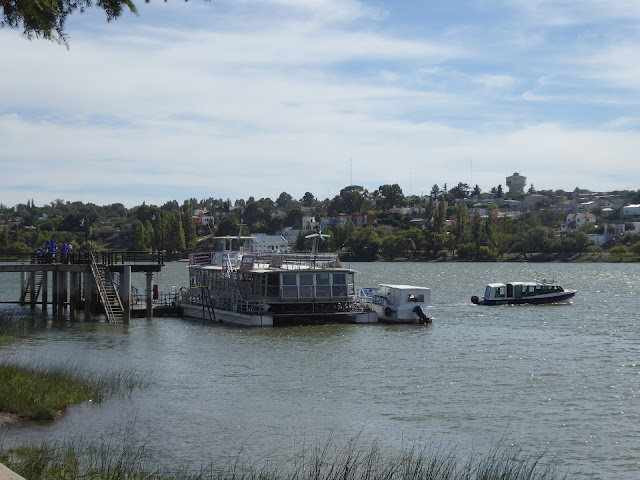 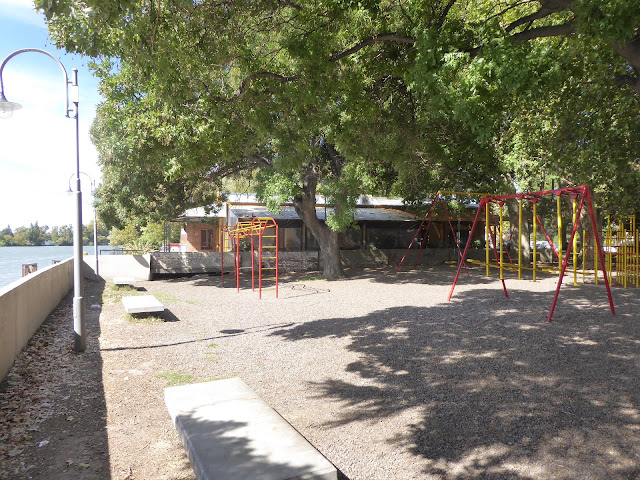 When it opened at noon, I entered this restaurant called Achival. 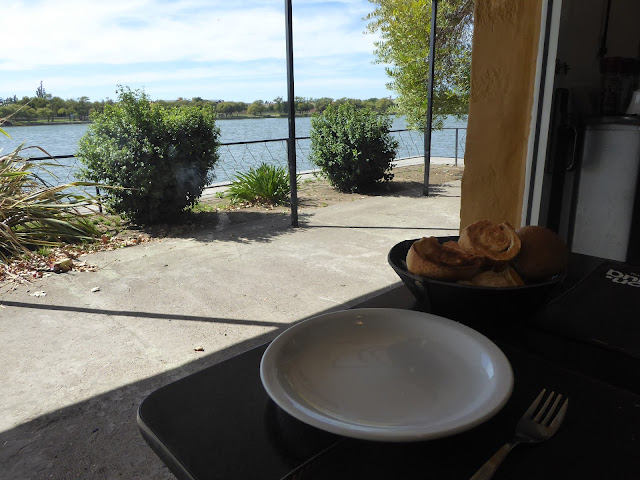 And being the first customer, I got a prime position by a window overlooking the river. 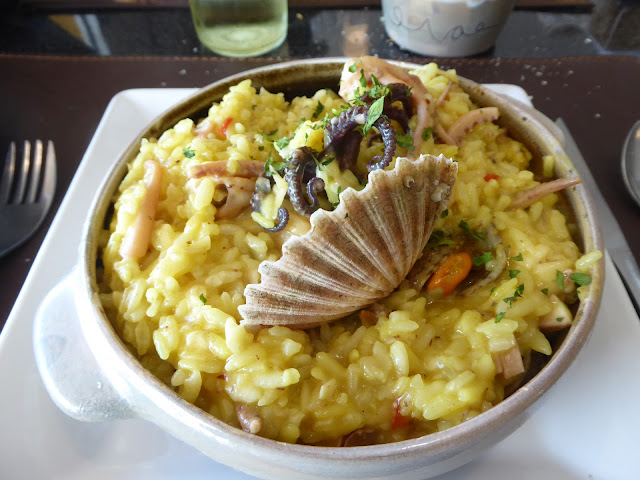 A reviewer mentioned that the seafood risotto was good and so it was. Plenty of seafood of different kinds and the risotto was excellent. I could only finish about three-quarters of it. I washed it down with a half bottle of Chardonnay. No, I did not eat the shell and the black octopus thing was too tough. 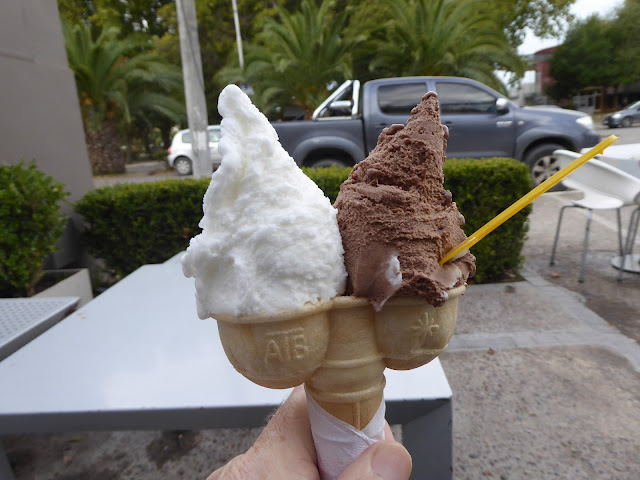 I checked into the hotel and had a very long nap. I was still pretty full from the long lunch and went to the ice-cream shop across from the restaurant. Lemon on the left and chocolate on the right. The lemon was just a little too sweet for me, but the chocolate rivalled the gelato in Rome that I raved about. It cost $2. 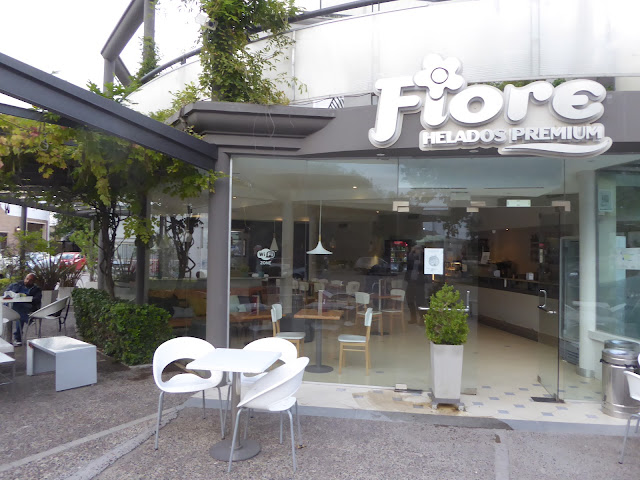 I think it is a chain of ice-cream shops.

I did not sleep all that well at the hotel because a small river-side carnival started up after dark and they were still going at 5 am. 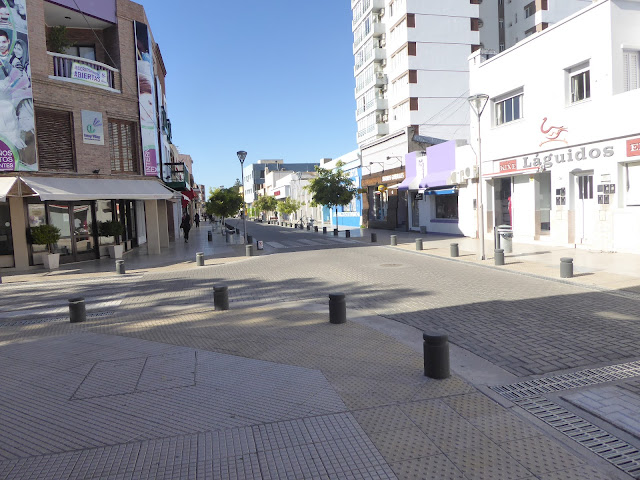 Next day I wandered back into the shopping area to find a phone shop to add more data to my phone. If the wi-fi in a hotel doesn't work well, I tether to my phone and upload pictures for my blog as well as the usual surfing. This was the case in the hotel in BB. 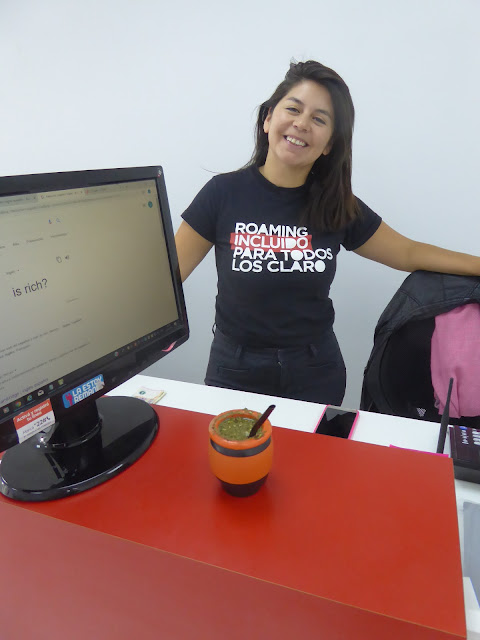 I found the Claro shop and this young lady helped me. If you click on the screen you can see that she had a program to translate from Spanish to English an back. She had a pot of the national drink, mate, and let me try it. It looks disgusting and tastes about the same. It's an acquired taste like Vegemite, but it is popular throughout much of South America. 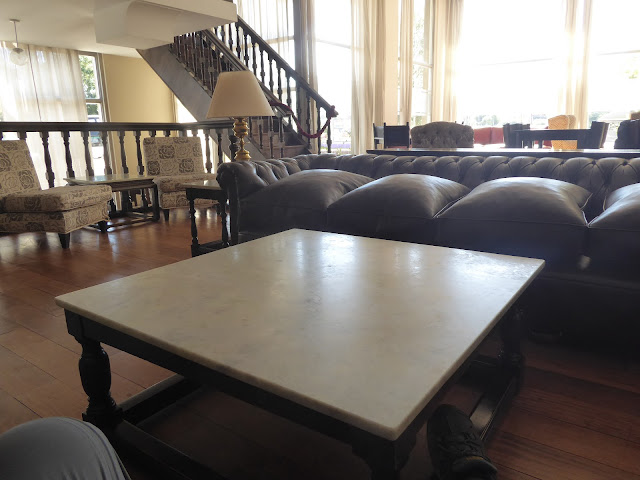 I went back to the hotel to wait for several hours before taking a taxi to the train station. The hotel had these curiously over-stuffed pillows on their sofas. 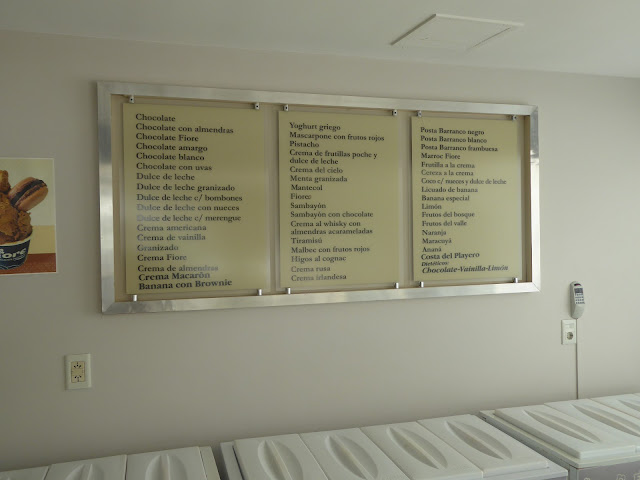 For lunch, I returned to the ice-cream shop. If you click on the picture, it enlarges. 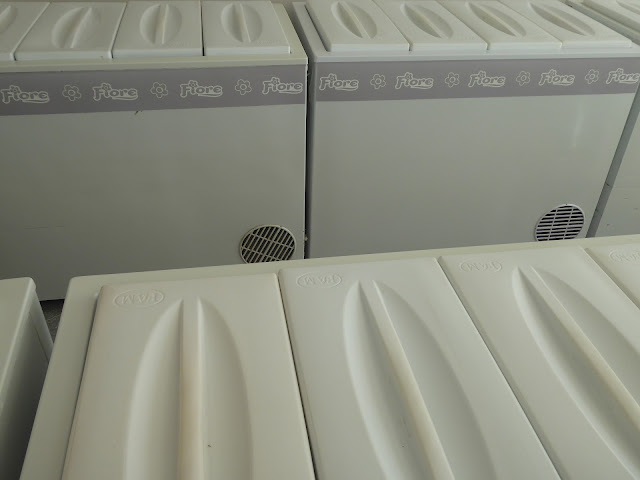 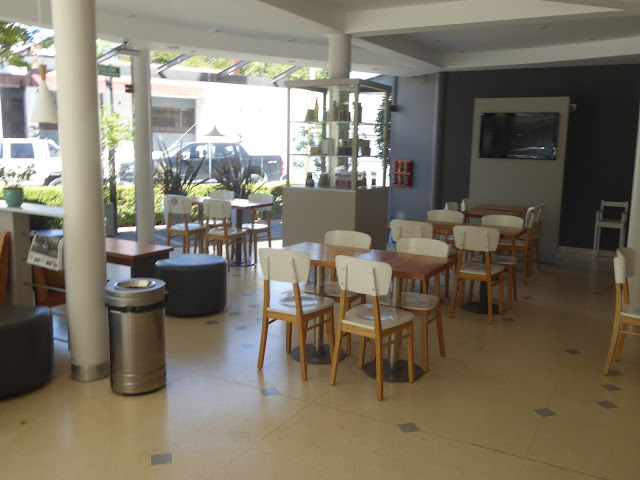 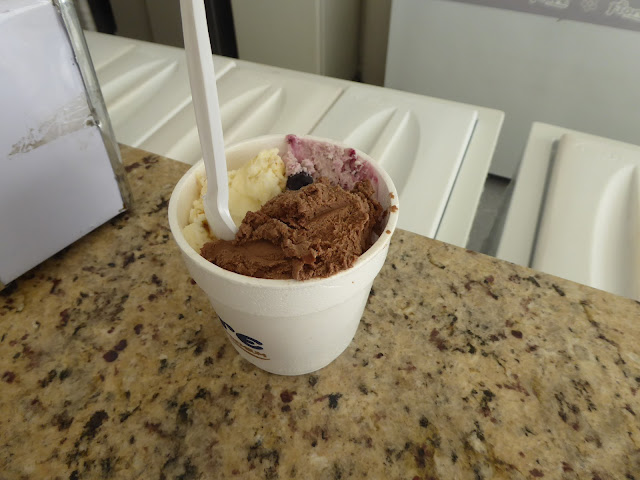 My pot of three different kinds. Chocolate again, a red version that had Malbec in its name and a cream version that had Cognac in the name (see towards the bottom of the middle column in the enlarged picture). All were excellent. 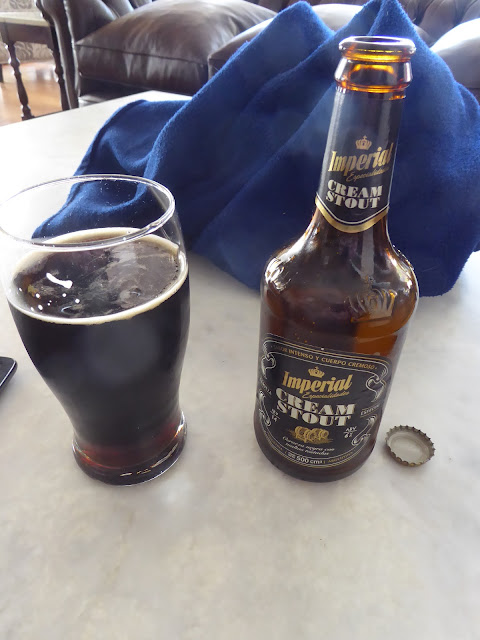 I returned to the hotel and eventually ordered this excellent stout.