It's 4:30 in the morning and I have woken up in my hotel in Cairo. When you travel and blog, you have to take any opportunity to upload photos while the other people in the hotel are asleep. Bandwidth can be scarce so I like to do the uploads while other guests are not using it.

You will notice that I will be including tips and comments that I hope future travelers might find useful when they research doing a trip like this. 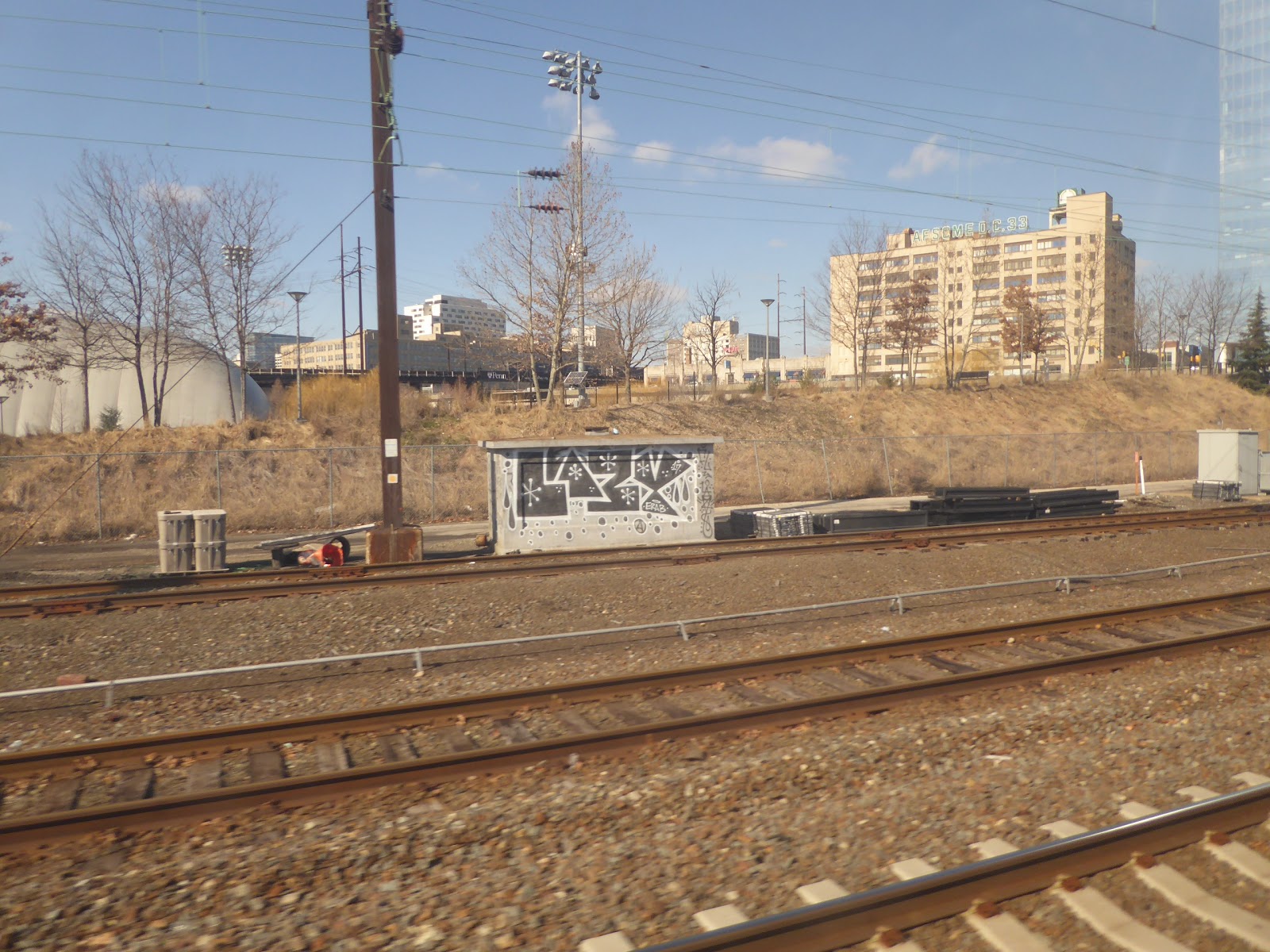 My Amtrak train up to Newark NJ was crowded but a lot of people got off at Philadelphia to go to the parade for the Eagles who finally won the Superbowl.  I read a report that over 700,000 people attended and possibly more. This rather ugly photo is the approach to 30th Street Station in Philly. 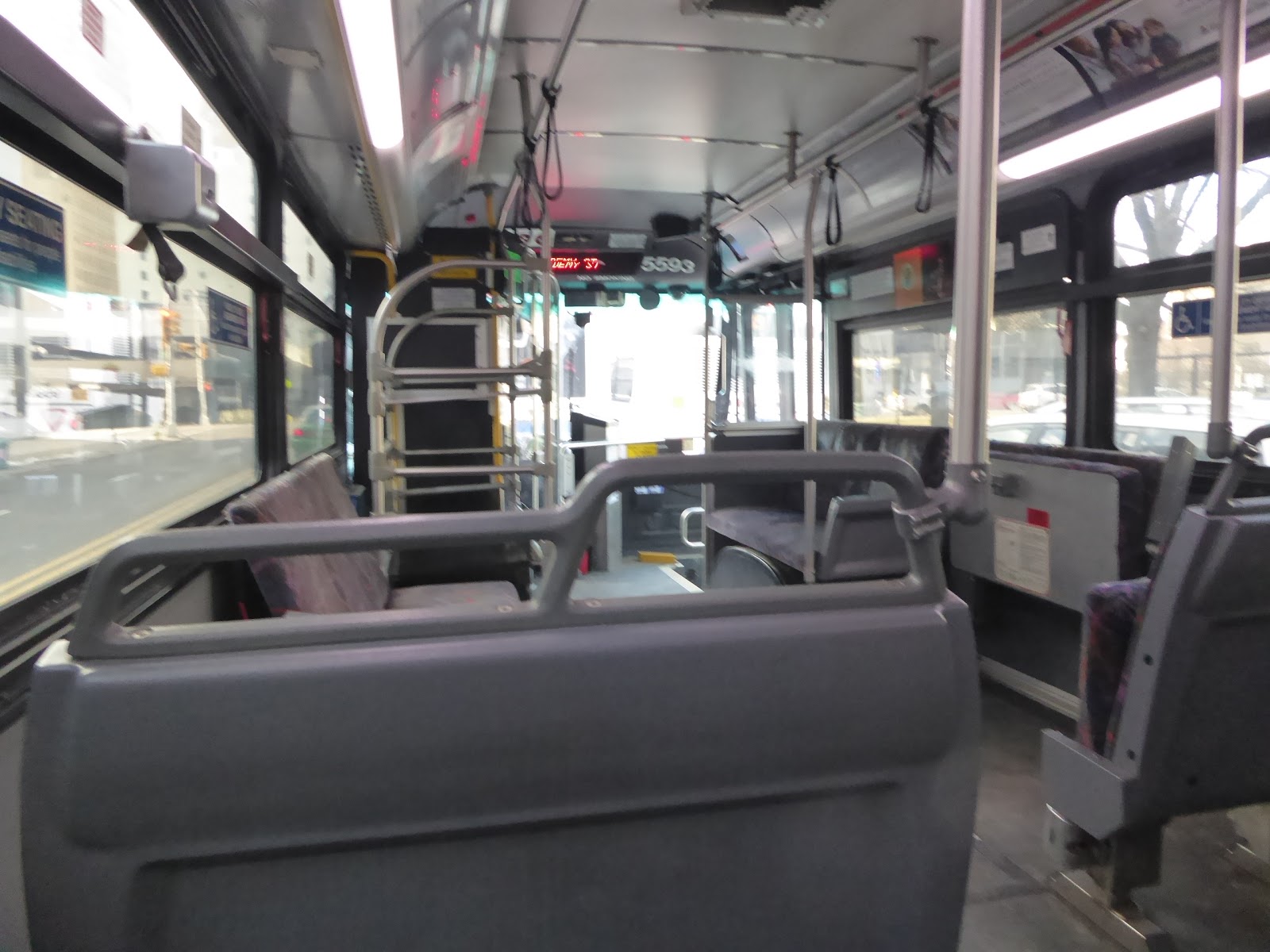 Most Amtrak trains do not stop at Newark Airport, but all trains stop at Newark Penn Station. It's possible to take a #62 bus from the station to the airport. The ride costs 75 cents for a Senior and you need exact change. The bus arrives at the 3A stop. There is a luggage rack and the buses arrive every 10 minutes or so. The ride is quite bumpy with a lot of stops in the downtown area. Downtown Newark has seen better days but there are quite a number of distinguished old buildings. The bus stops at all three EWR terminals. 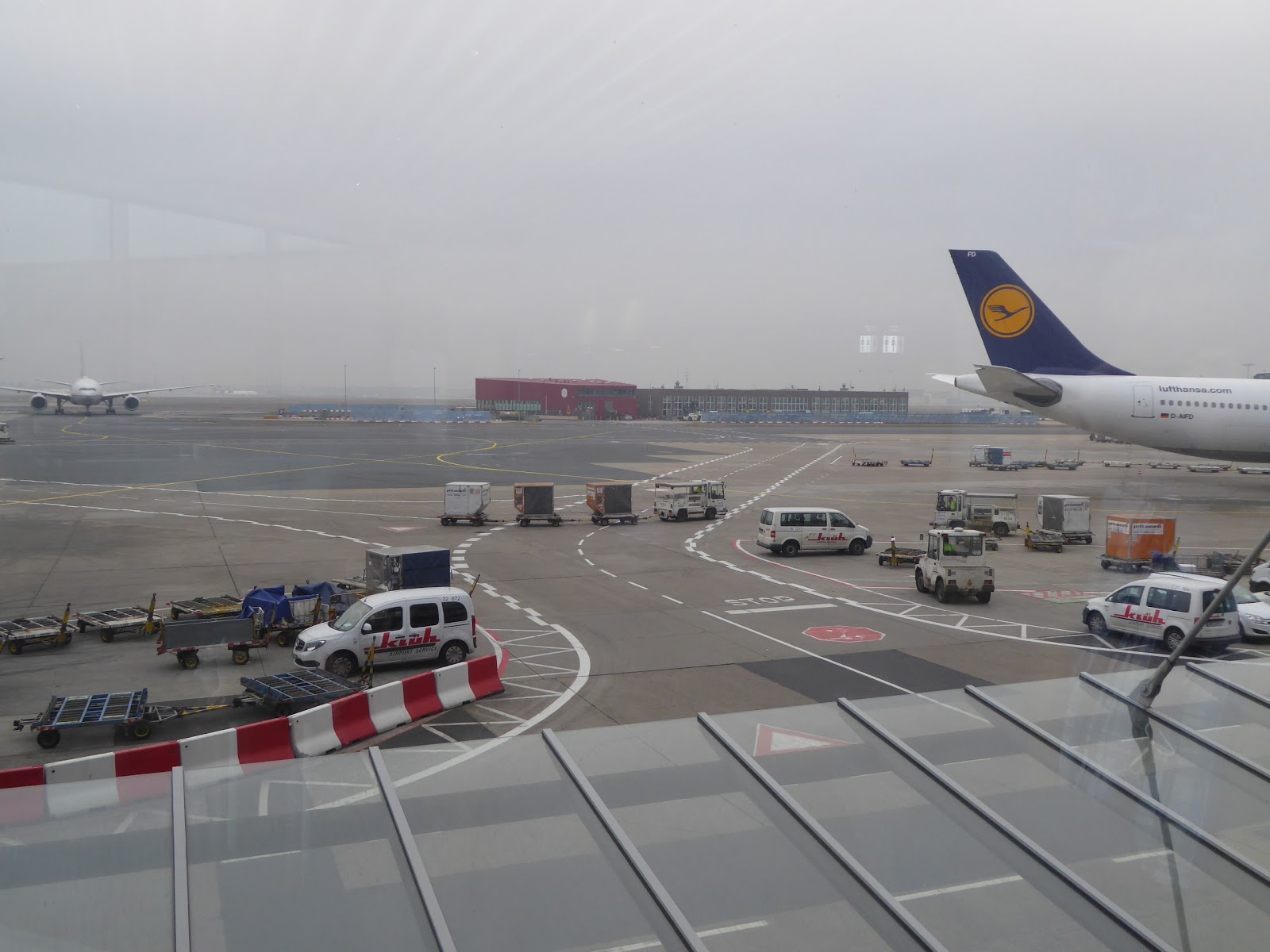 Lufthansa recently bought a number of new Boeing 747s for their flights to the USA and I was on one of them. It was a nice plane and while I did not manage to get four seats by themselves at the back of the plane, the two seats in the middle were free. The toilets on the plane are very cramped and the pasta dinner was disgusting, probably the worst I have ever eaten on a plane.

I took this photo at Frankfurt airport to show the grey fog that lingered into the afternoon when my flight to Cairo left. This airport is the largest in Germany and quite large. If you have to transfer to another plane, allow plenty of time (two hours) and be prepared to walk and walk and get quite lost. I hear that Munich is a much better airport to do a transfer. 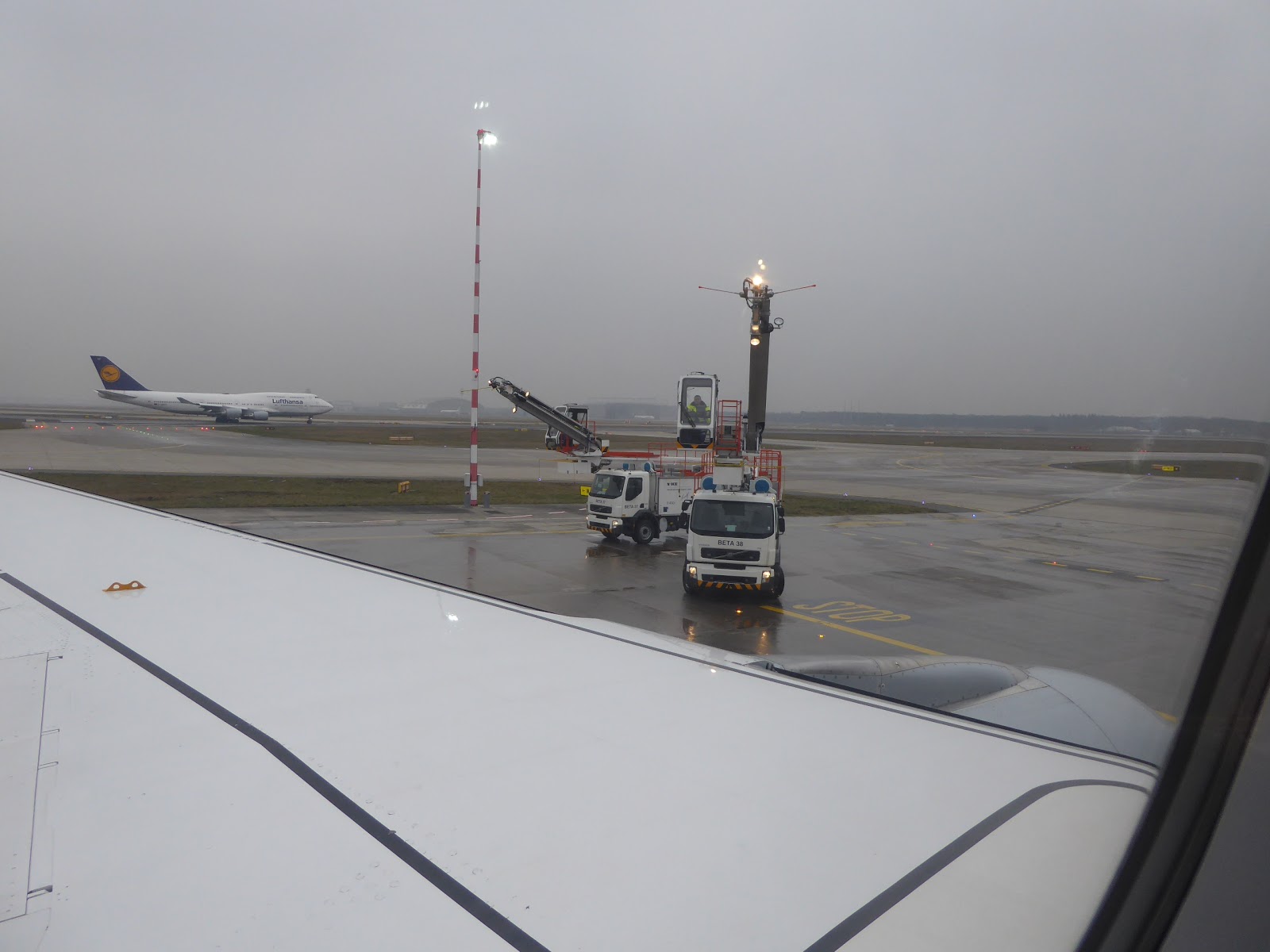 The fog had frozen on our plane wings and they needed to be de-iced. There were two de-icing trucks for each side of the plane. 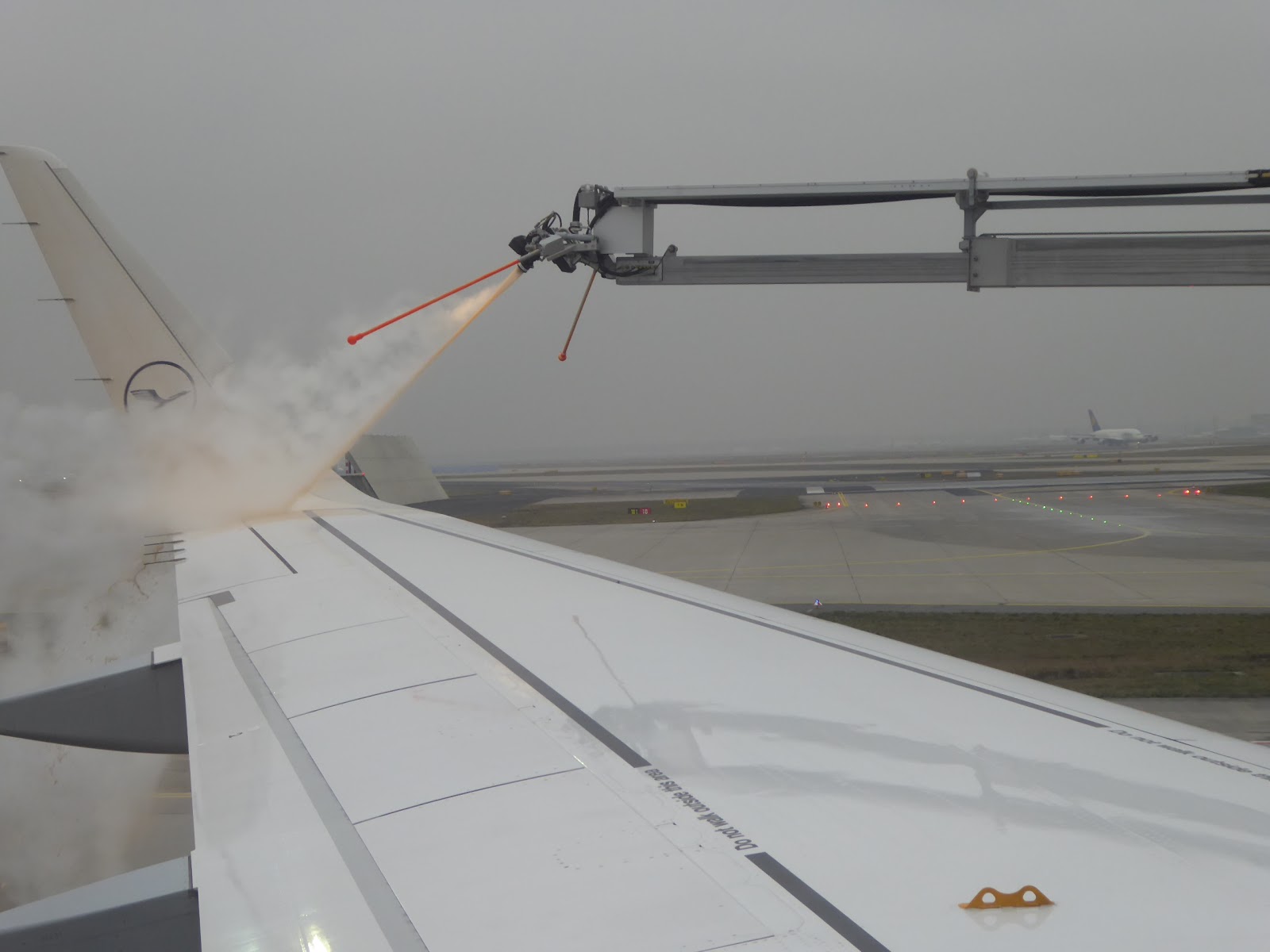 The spray is quite forceful and the process lasted about 10 minutes. 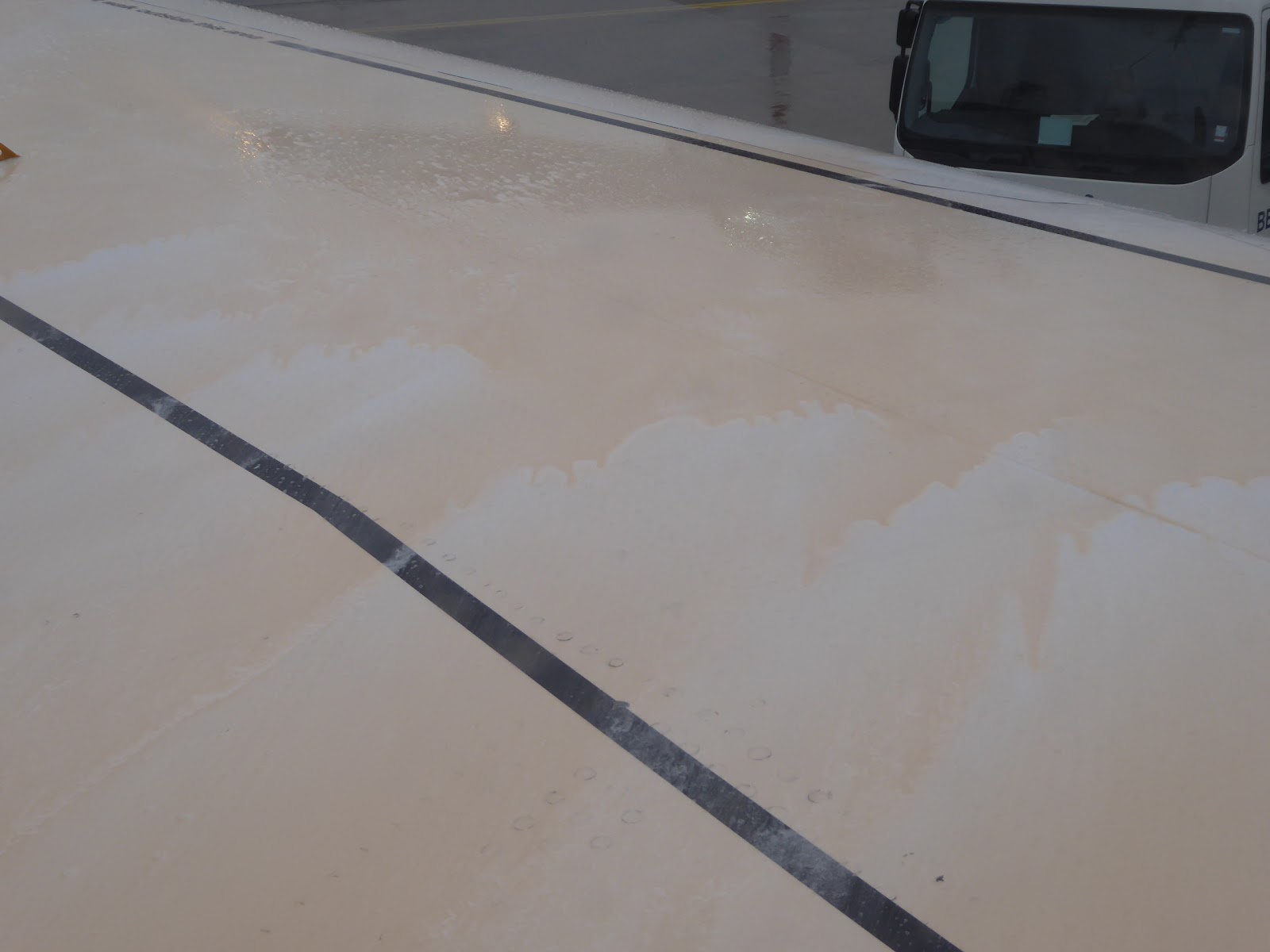 Residue on the wings. I did not see too much on the flight down from the window of the plane because it seemed the whole of Europe was covered by cloud. The meal on the plane appeared to be the same as the flight across the Atlantic. This time I ate the chicken which was better but nothing wonderful.

I had read horror stories about Cairo Airport but it turned out to be as modern an airport as you could wish for. There were quite a few men with placards for tour companies waiting and Mahmood from Timeless Travels was there waiting with his list. There were five of us and he took our passports and $25, bought the visas, stuck them in our passports and escorted all of us through the immigration and customs procedures. He has been doing this for 9 years and he spends all day at the airport waiting for arrivals. There was an ATM machine close to where Mahmood was waiting so I got some Egyptian money. The machine had a limit of 3000 Egyptian dollars (US $150) and that is what I got. It came in various denominations from 5 to 200 which is convenient.

There is a booth for Orange on the official side of immigration where you can buy a SIM card. In the baggage area there is a Vodophone booth. I waited while the others got their bags from the carousel. I was just using my usual small rolling carry-on bag and my duffel.

He transferred us to another man, Ramone from Thames who took our luggage to a little bus and then it was a 45 minute ride around the ring road to our hotel. It's a four lane bumpy highway in both directions and if you didn't look too closely, you might think you were in an American large city. There was even an Ikea. The driving style is aggressive but nowhere near as scary as India.

It certainly was an easy arrival. 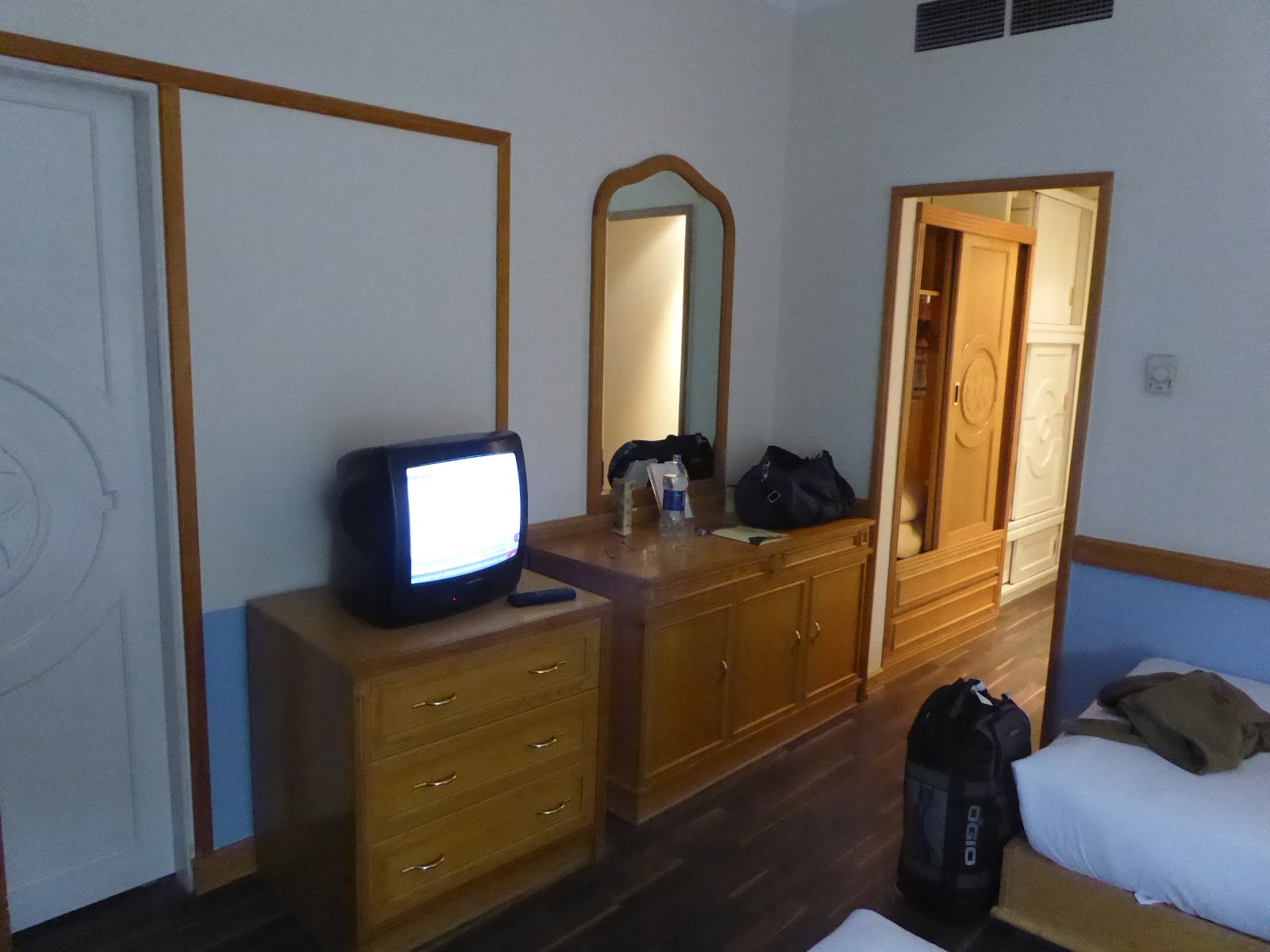 My Oasis Hotel room. Since I arrived a day early, I paid an additional $40. Internet is not free and I paid about $3 for a day's worth. 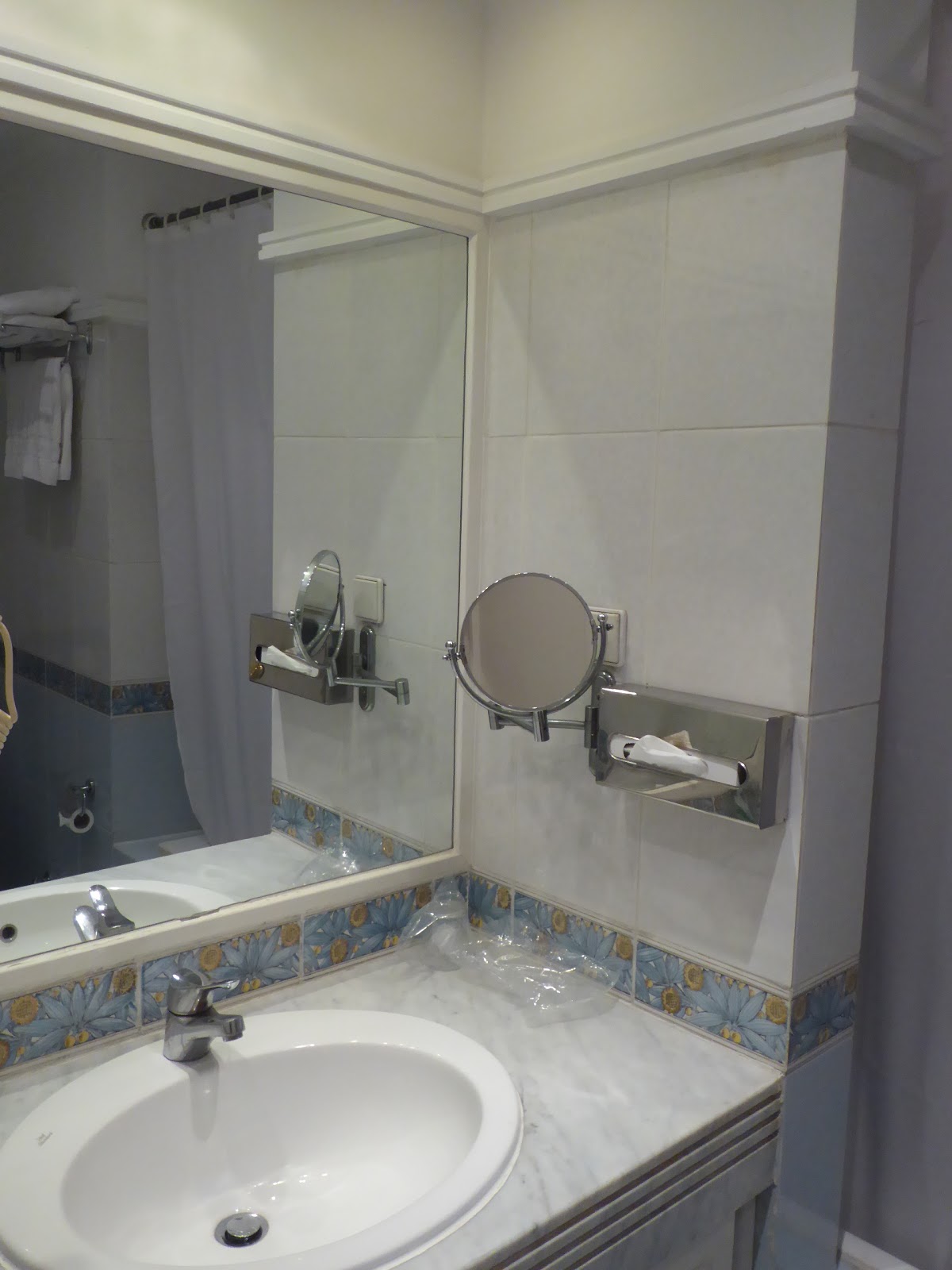 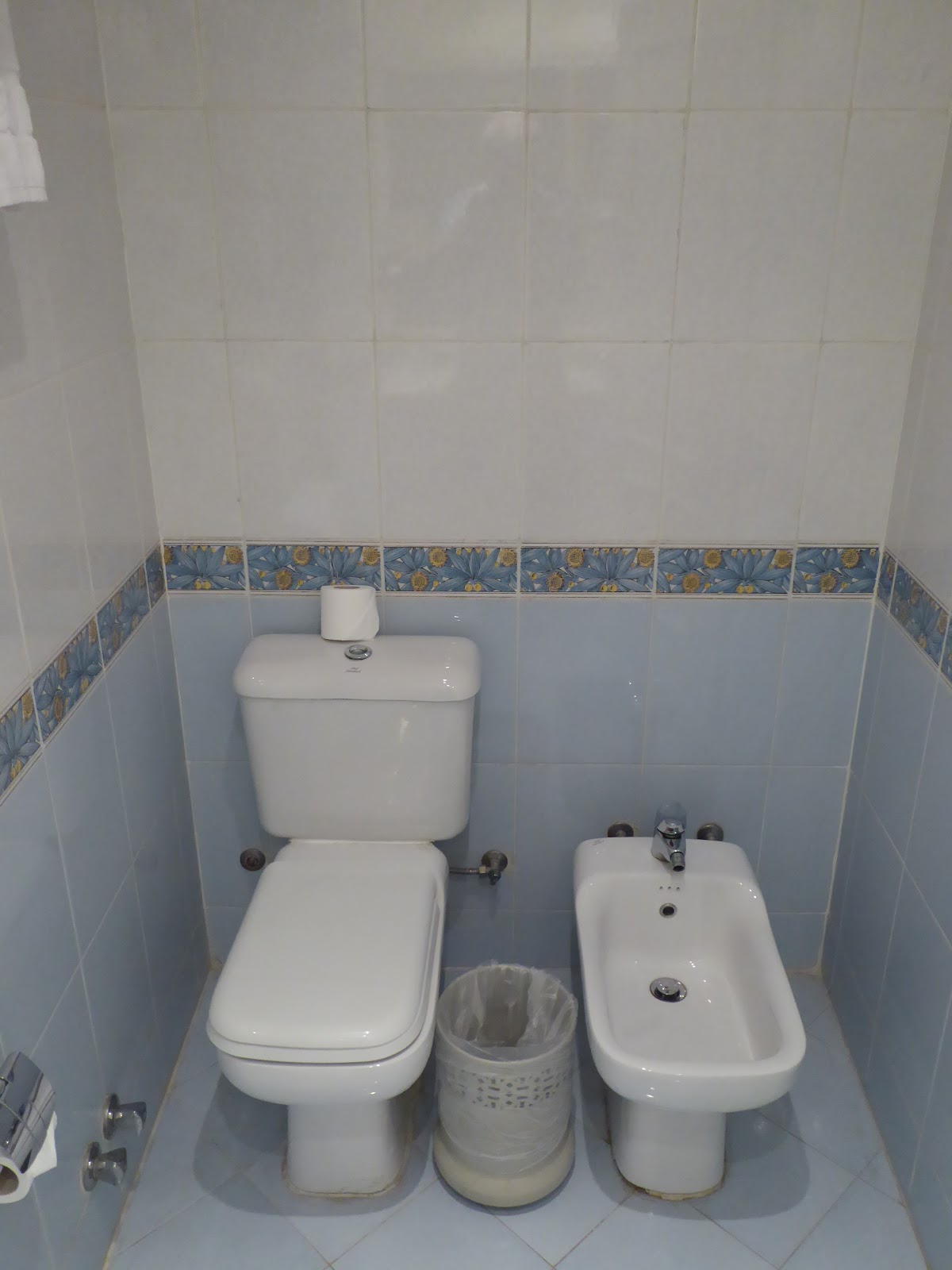 It's clean and more than adequate. 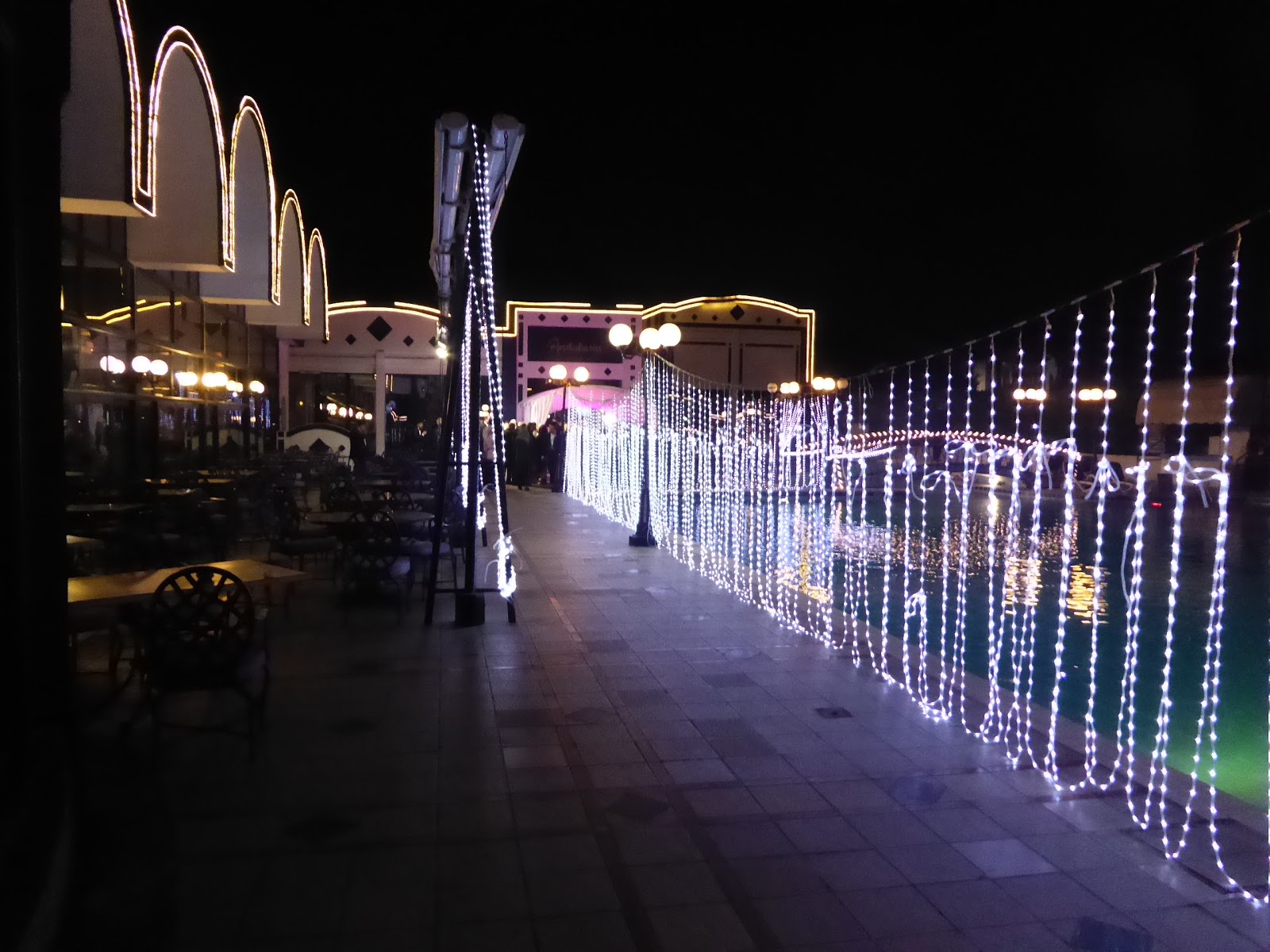 Decorations at the hotel. When we first arrived at the entrance gate, we had to wait at a barrier where there were guards along with a sniffer dog who walked around each vehicle with his handler. The dog seemed to enjoy his work.

A wedding reception was taking place as we walked to our rooms which are in a garden setting. Since I was carrying luggage I did not have my camera in my hand so I missed taking a photo of the bride who was being escorted by her father. She was as beautiful a bride as you could ever wish to see. The groom was not on a white horse as in India. Later as I went to the front desk to get a card with a code for the internet, the party was in full swing so I took a video just to capture the noise.

I was not hungry since I had eaten on the plane, so I went to bed right after sending off the 'arrived safely' message to my family members. I was so tired I fell asleep instantly.

And there must be a mosque nearby because I just heard the call to morning prayer. At least it wasn't very loud.