We are doing a three week house exchange with a family in Selestat, Alsace. The most convenient airport for them to fly into was Newark, NJ so we drove up there in 99 degree heat. Since we were exchanging cars as well as houses, we arranged in advance to leave our keys with Travellers Aid at the exit from Customs. It took so long for the French family to exit customs (over an hour) that we did not get to meet them since we had to catch our own flight on Delta to Amsterdam.

We both reckoned that this was the crappiest overseas flight we had ever taken. We had been scornful of United flights across the Pacific, but Delta reached a new low. It was essentially a short-haul 767 used for long-haul. The seats were hard, the headrests didn't fold to rest your head against and the entertainment was a screen at the end of the cabin. The food was awful. Although we were only about two thirds of the way down the cabin, the pasta choice had run out and all that was left was a revolting chicken patty swimming in some disgusting yellow muck. No doubt the word had got out to the passengers in front to avoid the chicken and eat the pasta. Wine came from a box. The blanket was made out of some awful synthetic material and was too small. No eyeshades were provided.

Although it was fine and hot at Newark, there was a big storm over Connecticut that delayed our departure for over an hour. We arrived at Schipol over an hour late which was not a problem since we had over four hours to wait for our flight to Basle / Mulhouse. 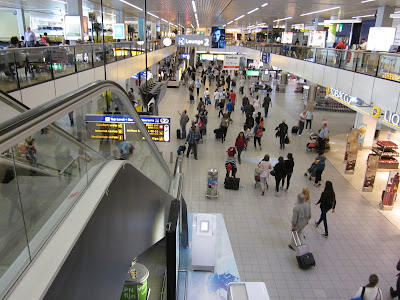 Schipol Airport lies a few miles away from Amsterdam. It must be enormous since the plane taxied for over six miles to get to the terminal. Inside the terminal is amazing. 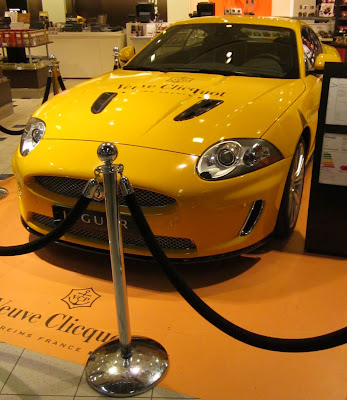 There were the usual collection of expensive shops selling duty-free goods at prices way above what you would normally pay. Who buys this stuff? Still I was impressed by the Jag in Veuve Clicquot colours. 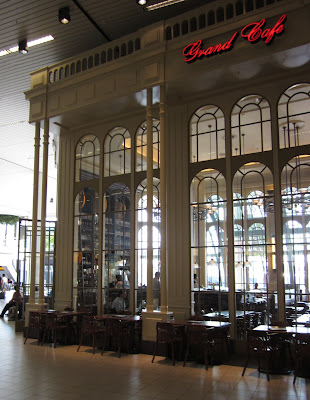 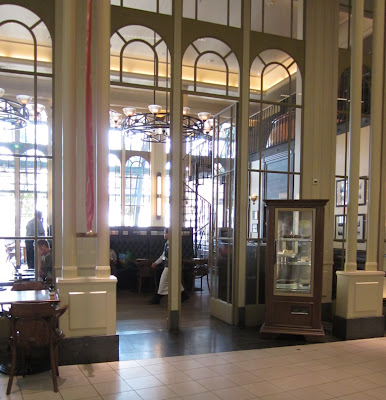 You don't find a cafe like this in most airports. 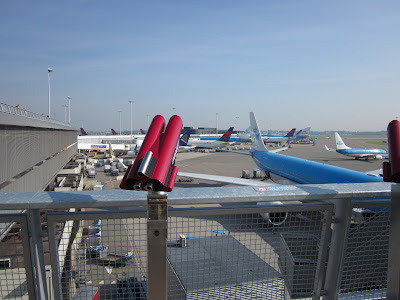 They still have an observation deck. Unfortunately it was very smelly with all the fumes of aviation fuel. 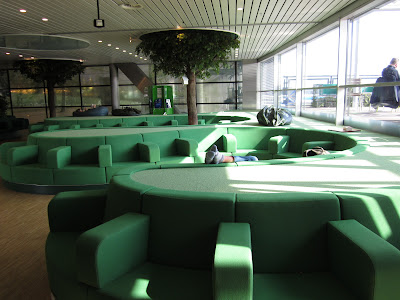 In a quiet part of the terminal is an area for passengers to rest, even sleep. 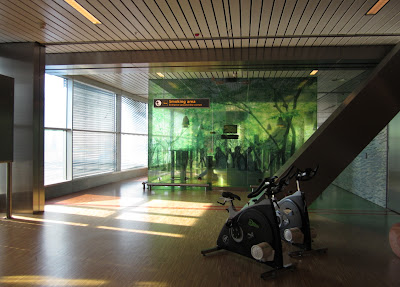 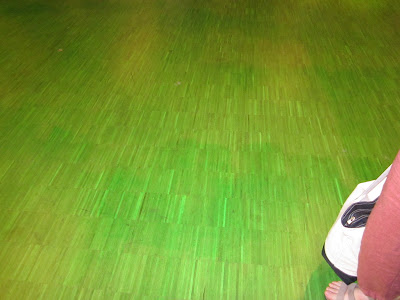 Weird pattern on the floor along with Marianne's foot. 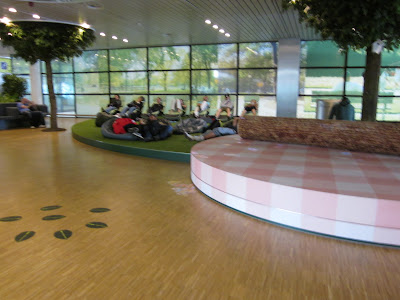 The sleeping area which is much darker than what the photo shows. 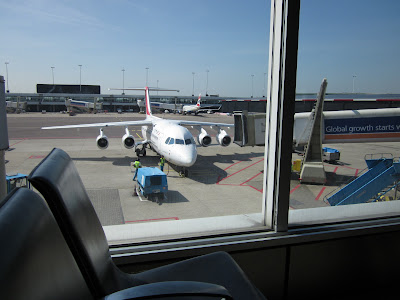 Out City Jet plane  (Avro JR45)which took us to Basle. This small airline put Delta to shame. The staff were friendly and enthusiastic, the seats were more comfortable and the bread roll with a piece of cheese was infinitely better than the chicken blob. 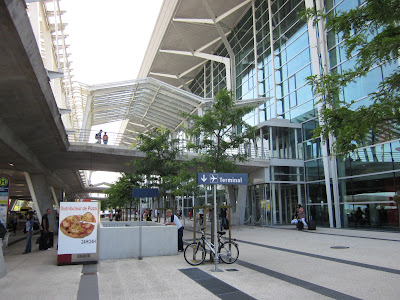 The outside of Basle / Mulhouse airport. It's quite a large terminal and easy to navigate. Oddly, there is a side in France and another in Switzerland and you have to decide which country you want to exit into. 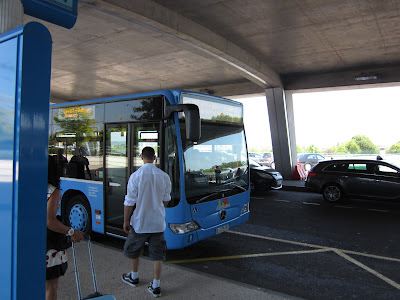 The bus (Distribus #11) that circles every 30 minutes between the airport and the local train station. There were plenty of signs to get you to this spot, but no sign to tell you how much it costs, which turns out to be 1 euro. 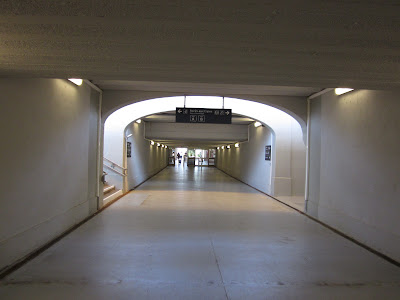 The tunnel at the Saint Louis station. 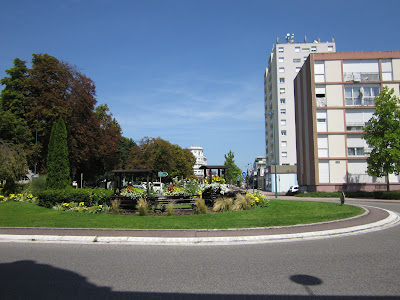 Detail of the train sculpture/creation. 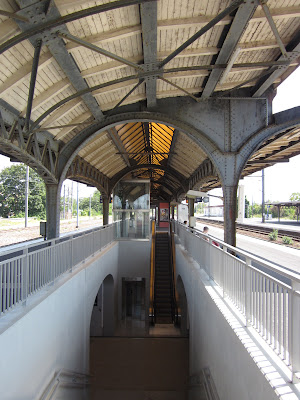 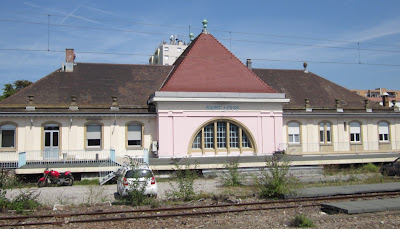 The station building. There were four people inside selling tickets. For some reason or other, they could not get my credit card to work, even by swiping so I had to pay cash for the train fares up to Selestat (15 euro each). This is one area where the US really needs to play catch up with the rest of the world and use credit cards with an embedded chip.

The difficulty of using old fashioned swipe credit cards issued by US banks overseas is becoming more of an issue. Most experienced travelers already know to get a Capitol One card because they don't charge an extra 2% on the currency exchange as the other cards such as Chase etc. "Capital One does not charge a fee for using your credit card for foreign currency transactions. Foreign purchases will be converted at the foreign exchange rate in effect at the time of posting the charge." However the US credit card issuers don't seem to be listening to their clients who go out of the US and need a card that works easily in the rest of the world. Very short sighted. For more discussion about this issue, take a look at this forum. 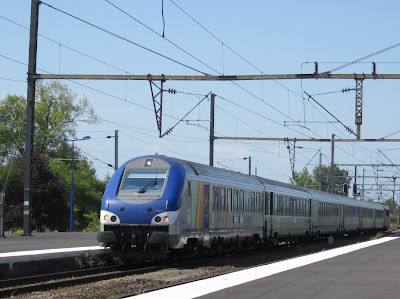 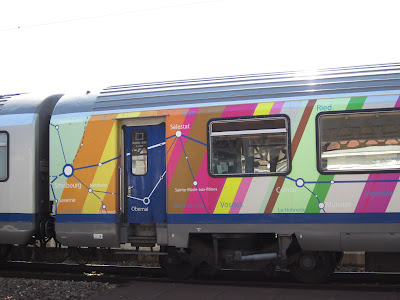 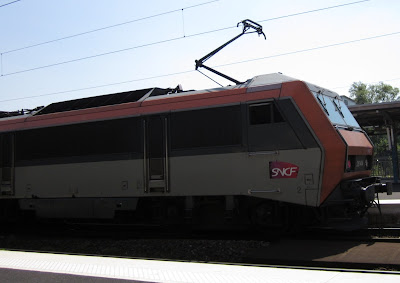 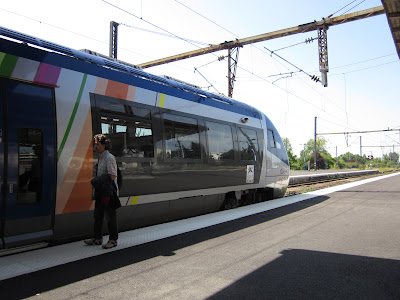 Some of the trains that came while we waited. 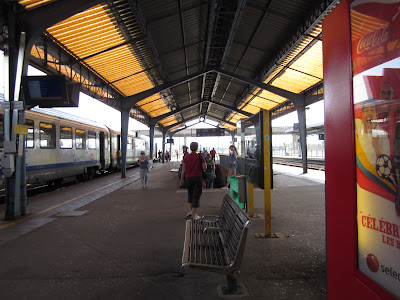 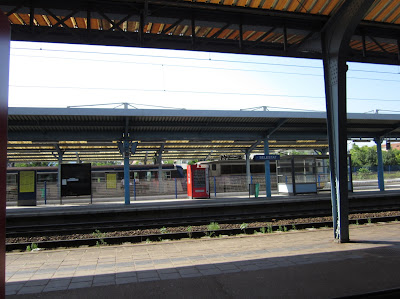 Selestat station. We had arrived. 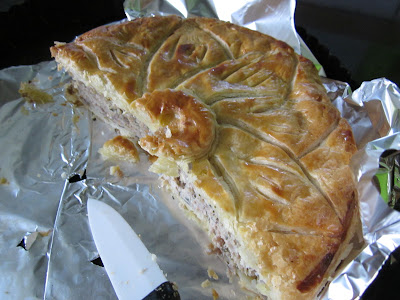 Our exchange family left us this delicious pie for us to eat for dinner as well as a bottle of local Pinot Gris. There is something about drinking local wine that you can tell immediately. It's a freshness that comes from not being shipped all over the world in God know what conditions. This wine had really intense flavours that I've never had in Pinot Gris before. 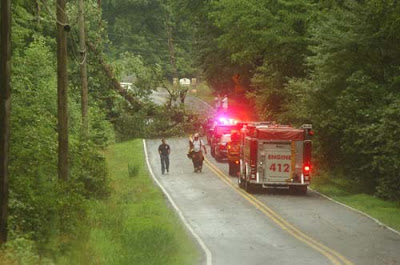 When we got to the exchange family's house, we established a connection to their wireless internet and got an email from one of our friends that there had also been a big storm at home with several trees down. The road to our community was blocked for several hours. The above photo comes from the Cecil Whig.

Oddly enough, our Canadian visitors also experienced a couple of downed trees while they were there. Obviously we will need to warn future visitors.