Perhaps the best part of the whole trip was living for three weeks with access to French food. 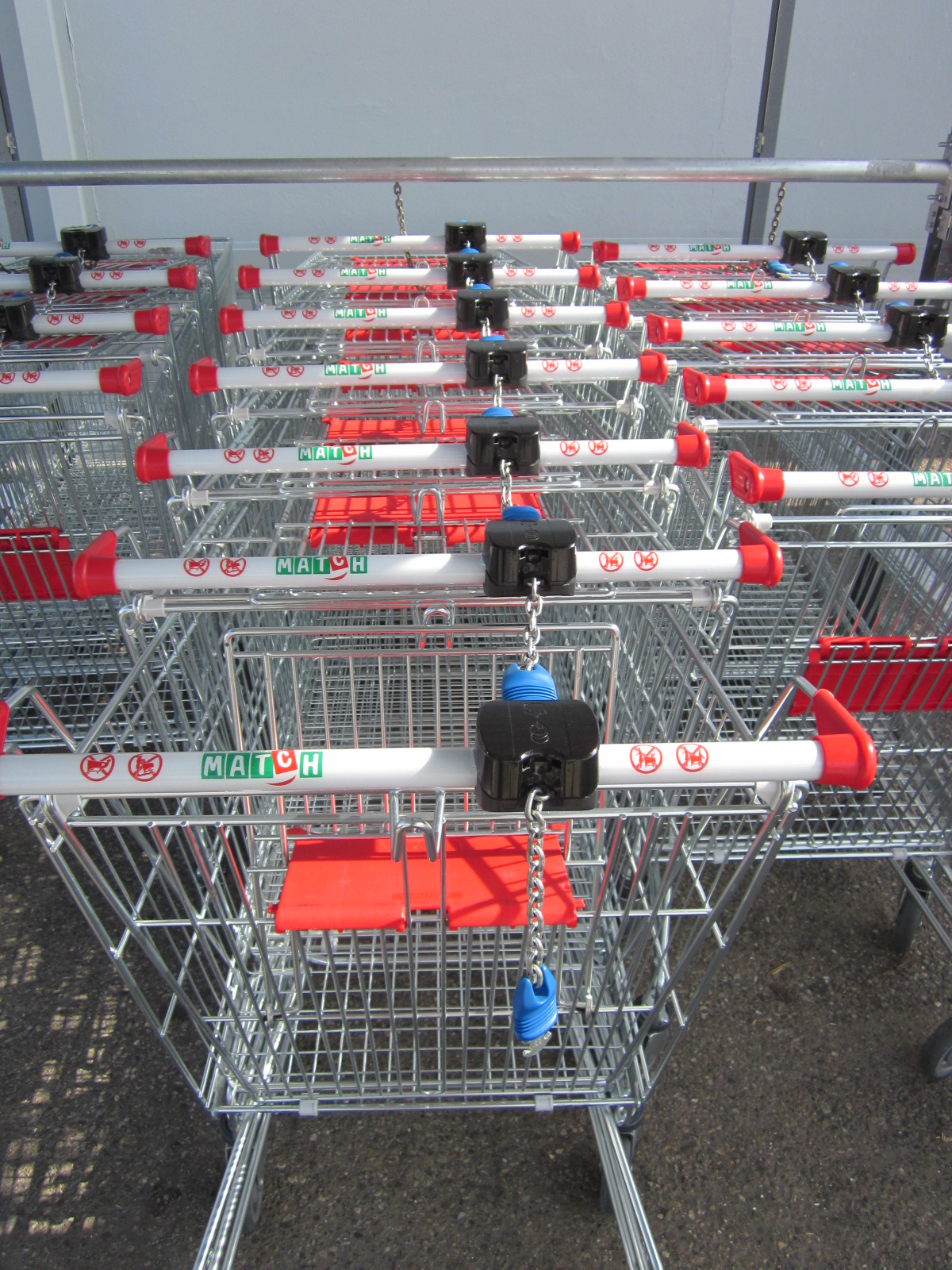 We mostly went to a Lidls (similar to an Aldi) or this Match supermarket.  All the supermarkets use these carts that require you to put a one euro coin in the slot to take your trolley. You get it back when you return the trolley. It helps to leave a one euro coin in your car so you always have one available. Our exchange family had a plastic coin which worked fine. It's a good system because everybody brings their shopping cart back and they aren't rolling about the parking lot banging into cars. 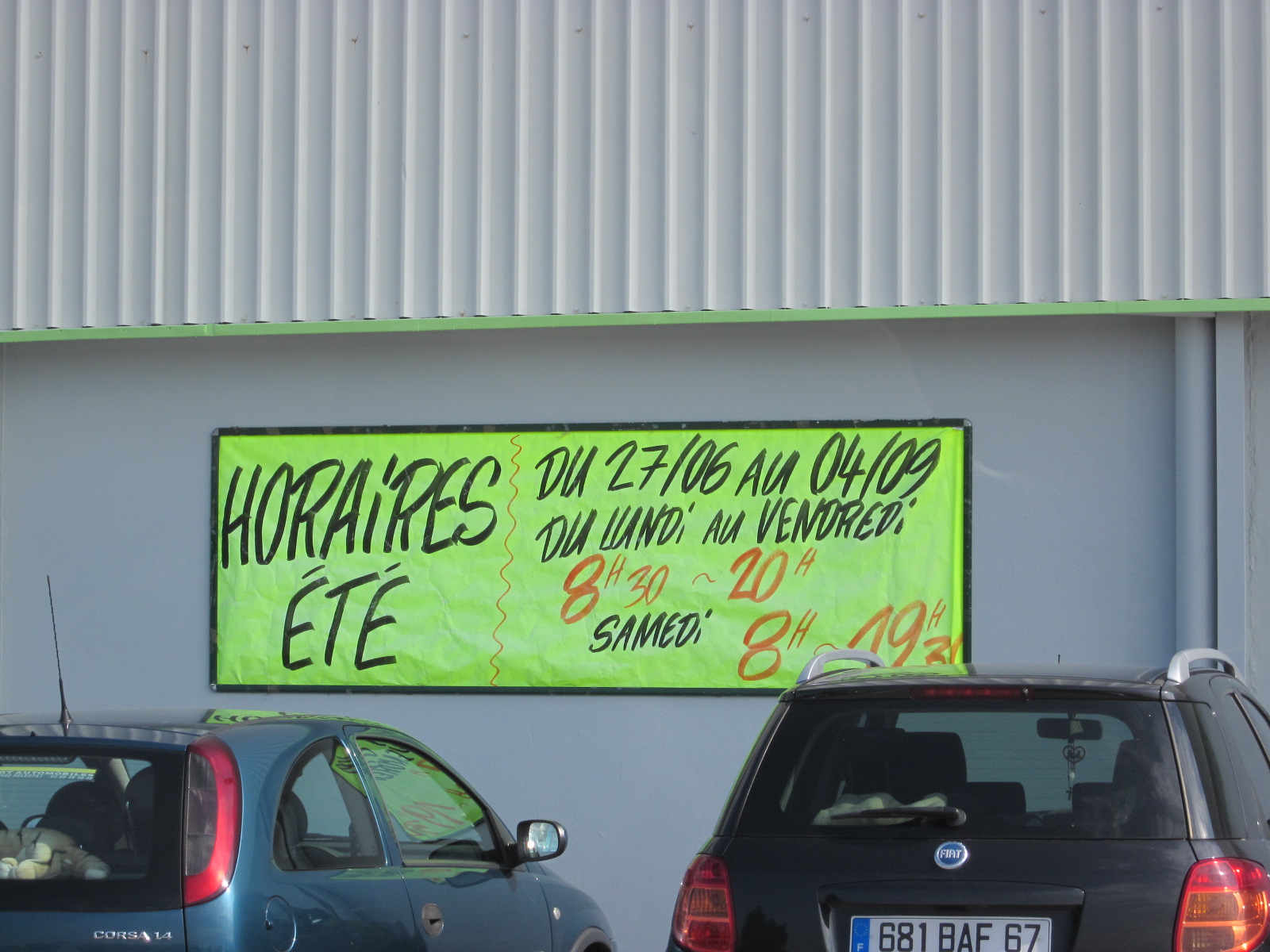 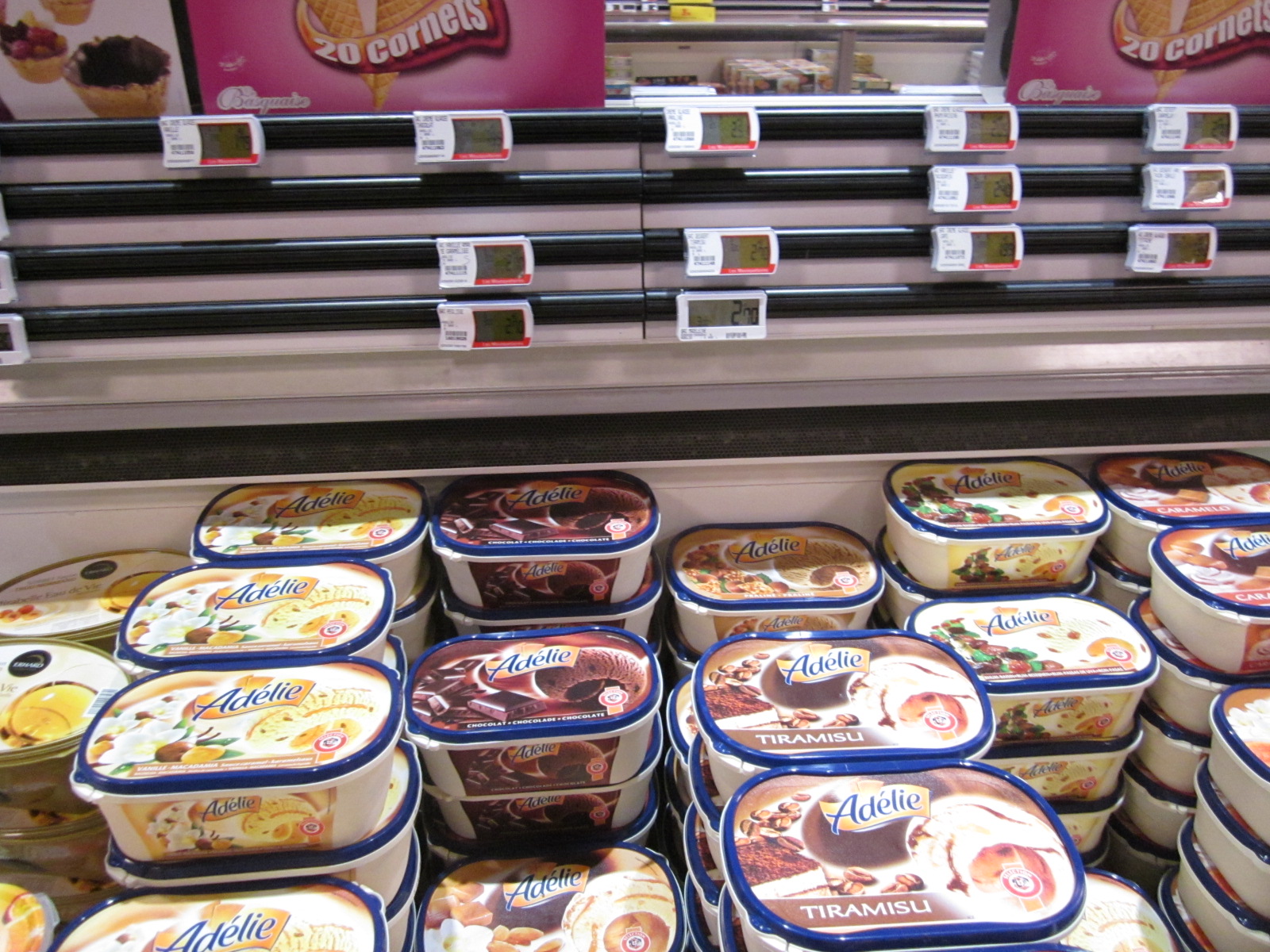 We also went to the huge Intermarche in the northern part of Selestat. I was intrigued by the little electronic gizmos that displayed the prices. You can click on the picture to enlarge it. 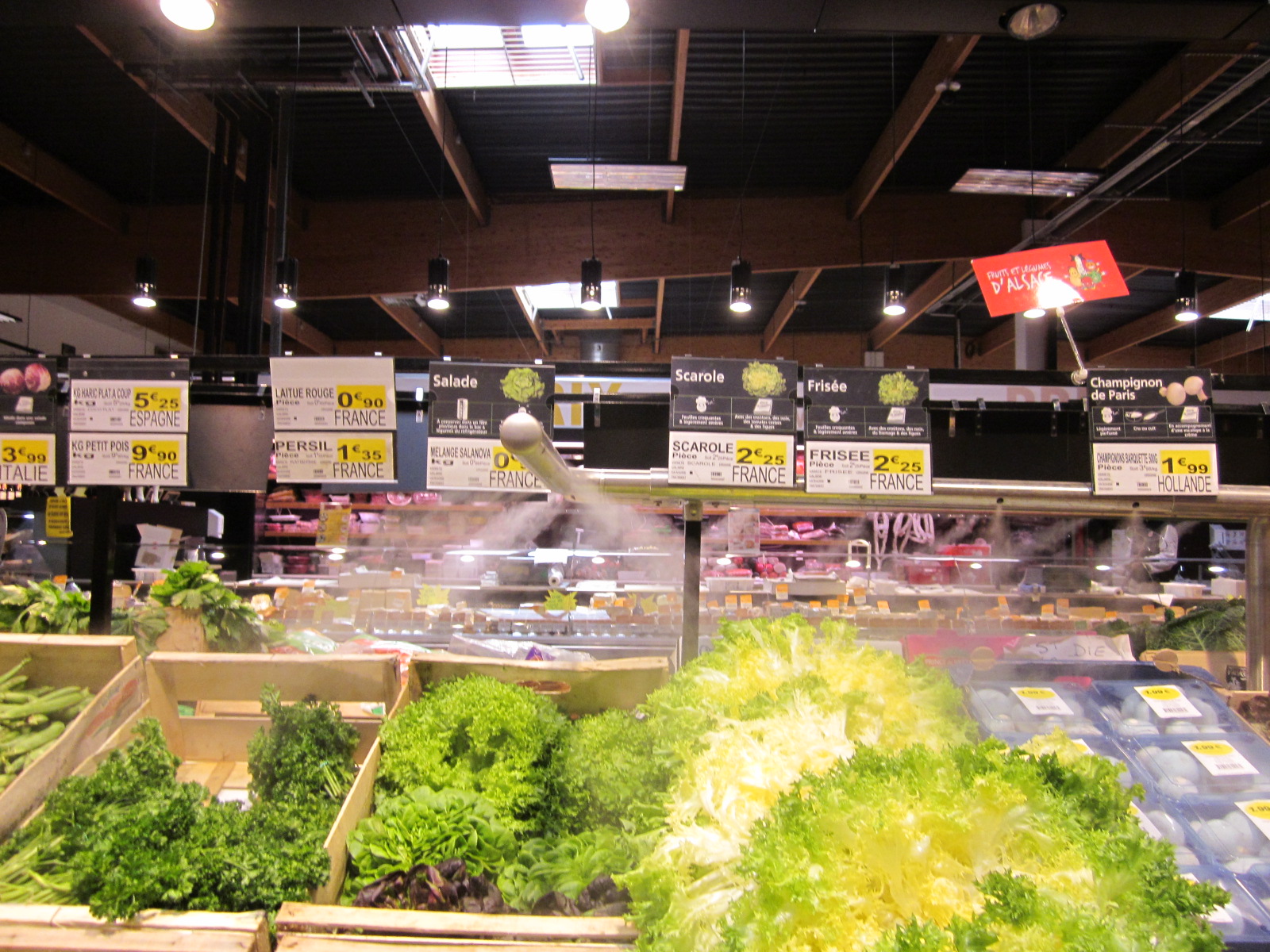 How they spray their vegies. 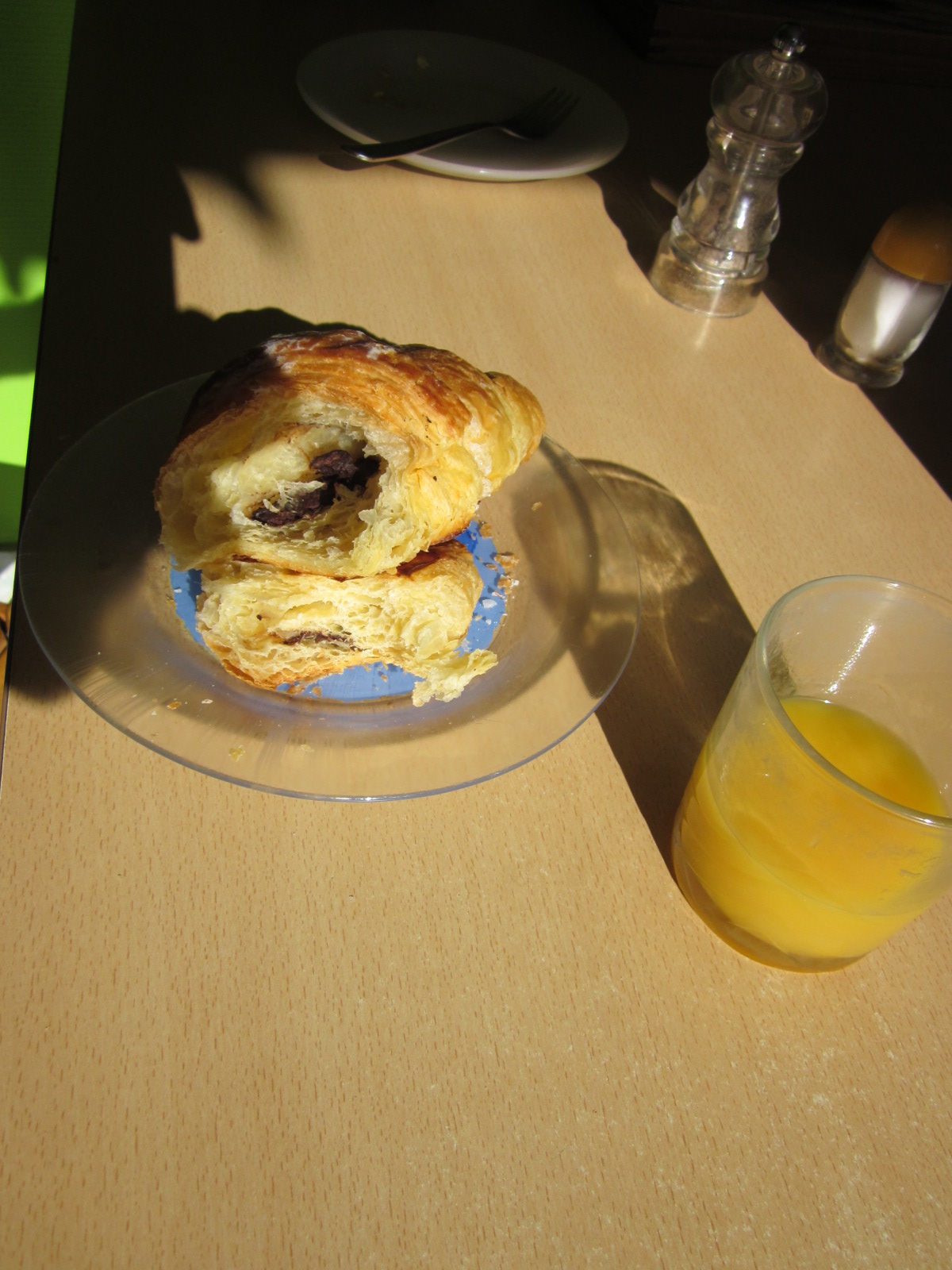 There's something really luxurious about a chocolate croissant fresh from the bakery for breakfast. The orange juice came from Spain and was quite inexpensive. 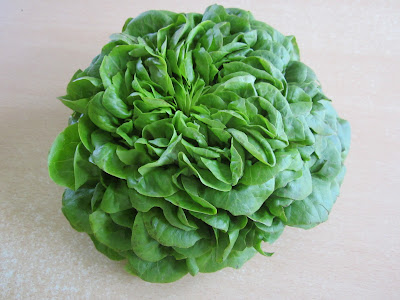 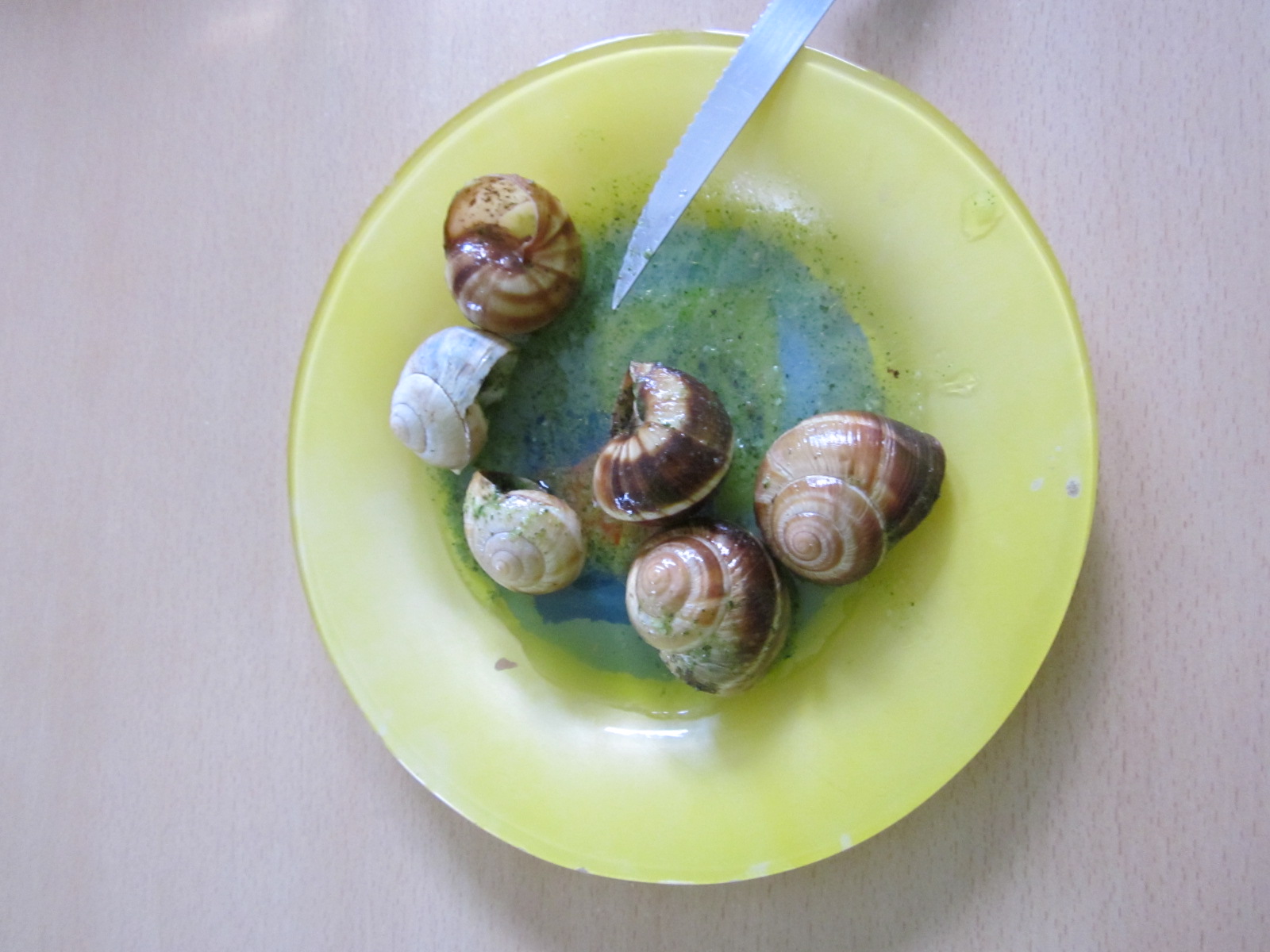 Snails for dinner. They came in a pack of 12 already stuffed with garlic butter for under 2 euros. I shoved them in the oven for a few minutes and they were ready to eat and quite delicious. 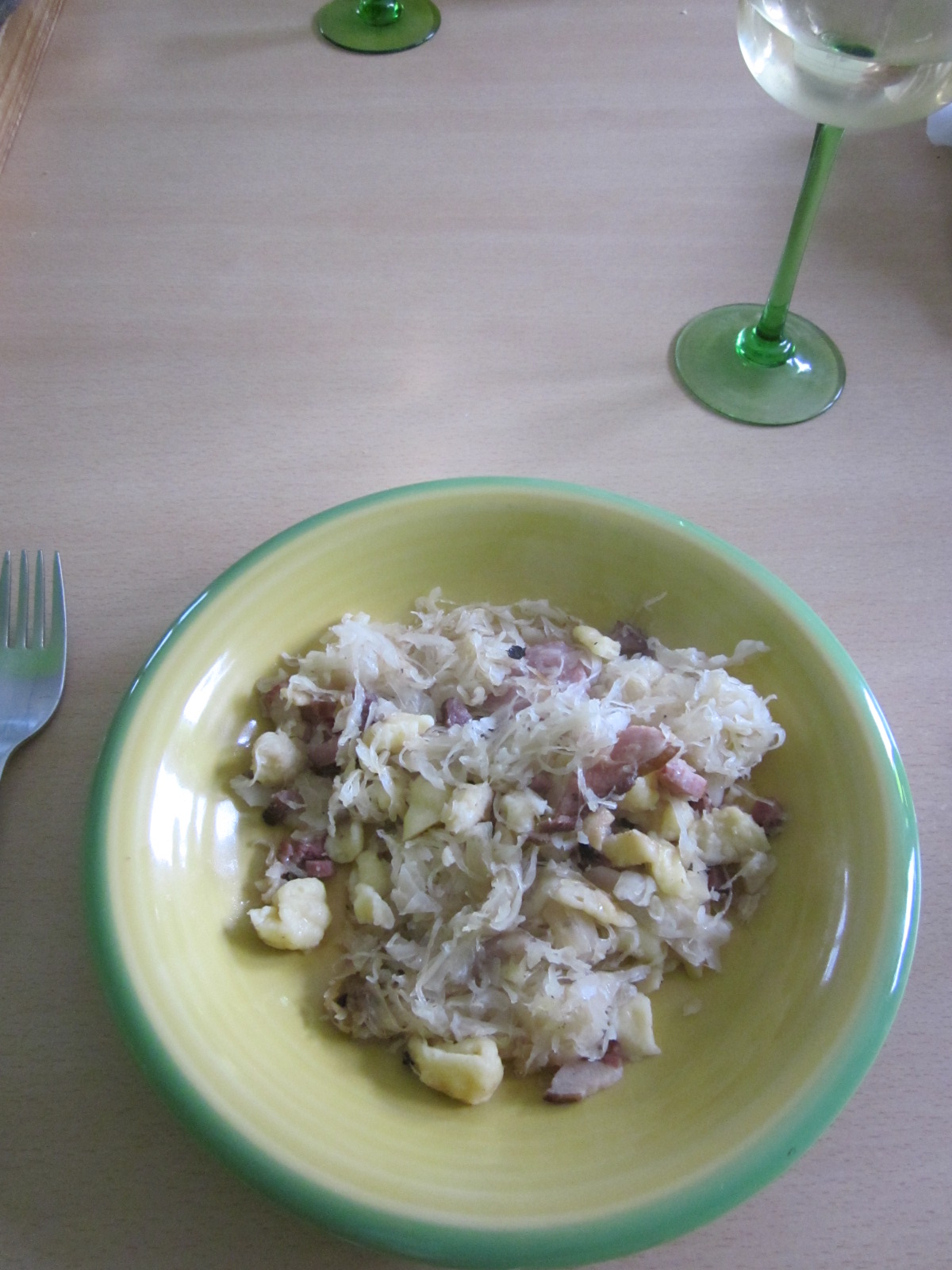 The sauerkraut we bought at the market. 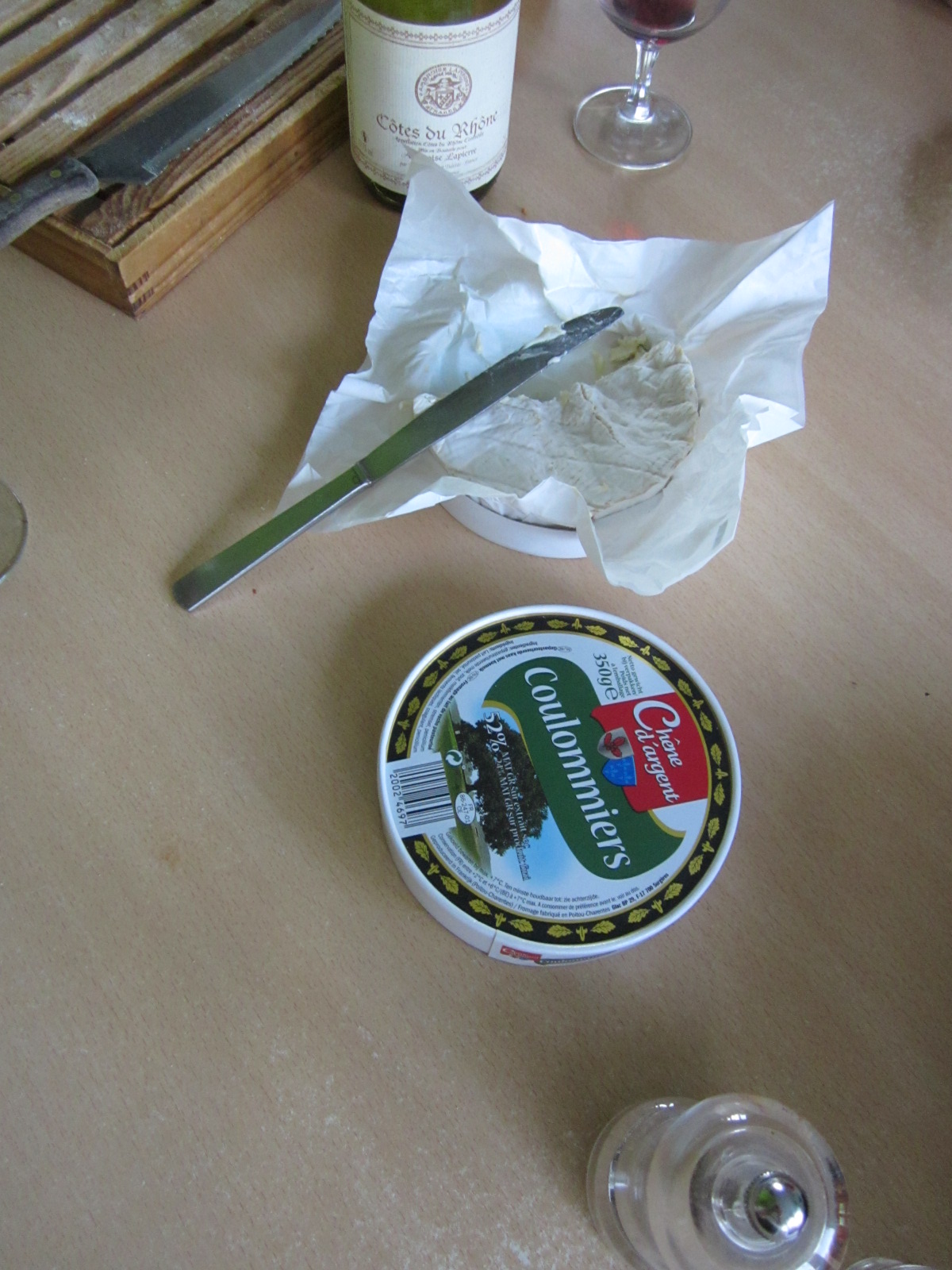 Camembert and red wine. What a combo. 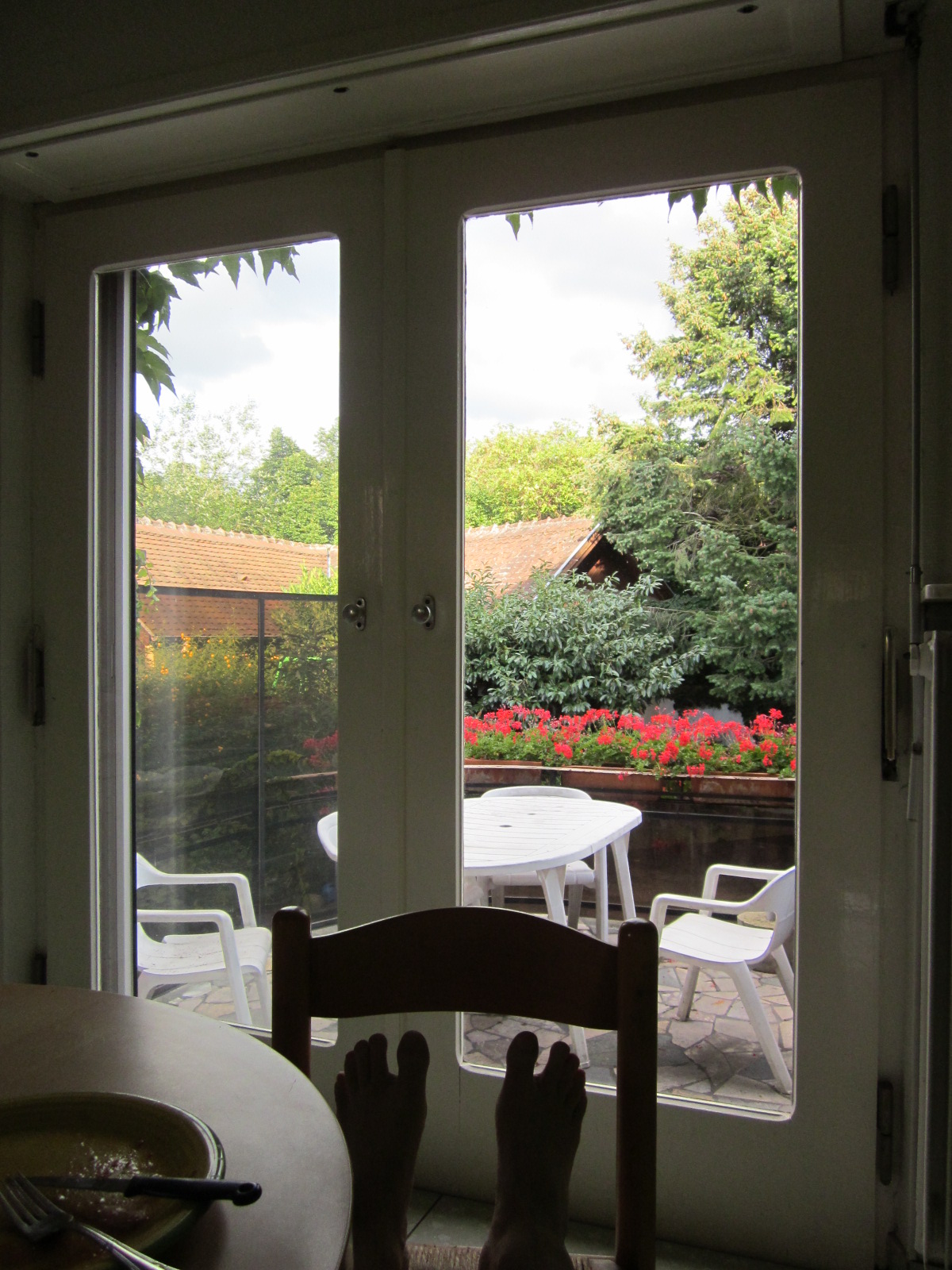 Some lout had his feet on the chair. No doubt he was stuffing himself with more bread and Camembert as he sloshed down the plonk. We mostly ate indoors, but occasionally out on the terrace when the weather was nice. 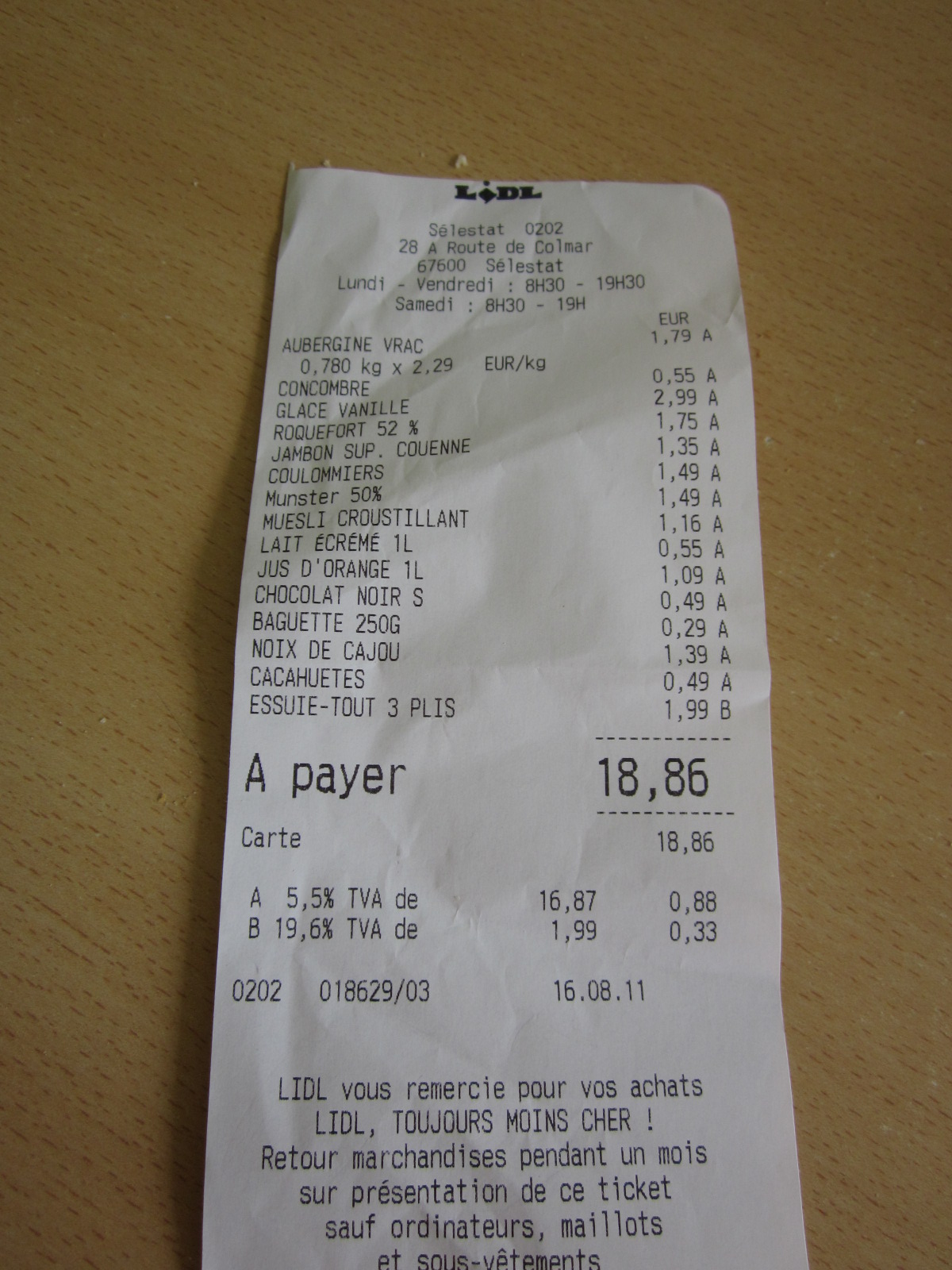 A shopping receipt from Lidls. Click on the picture to enlarge it. One euro is about US $1.40. We thought food and wine was very inexpensive. 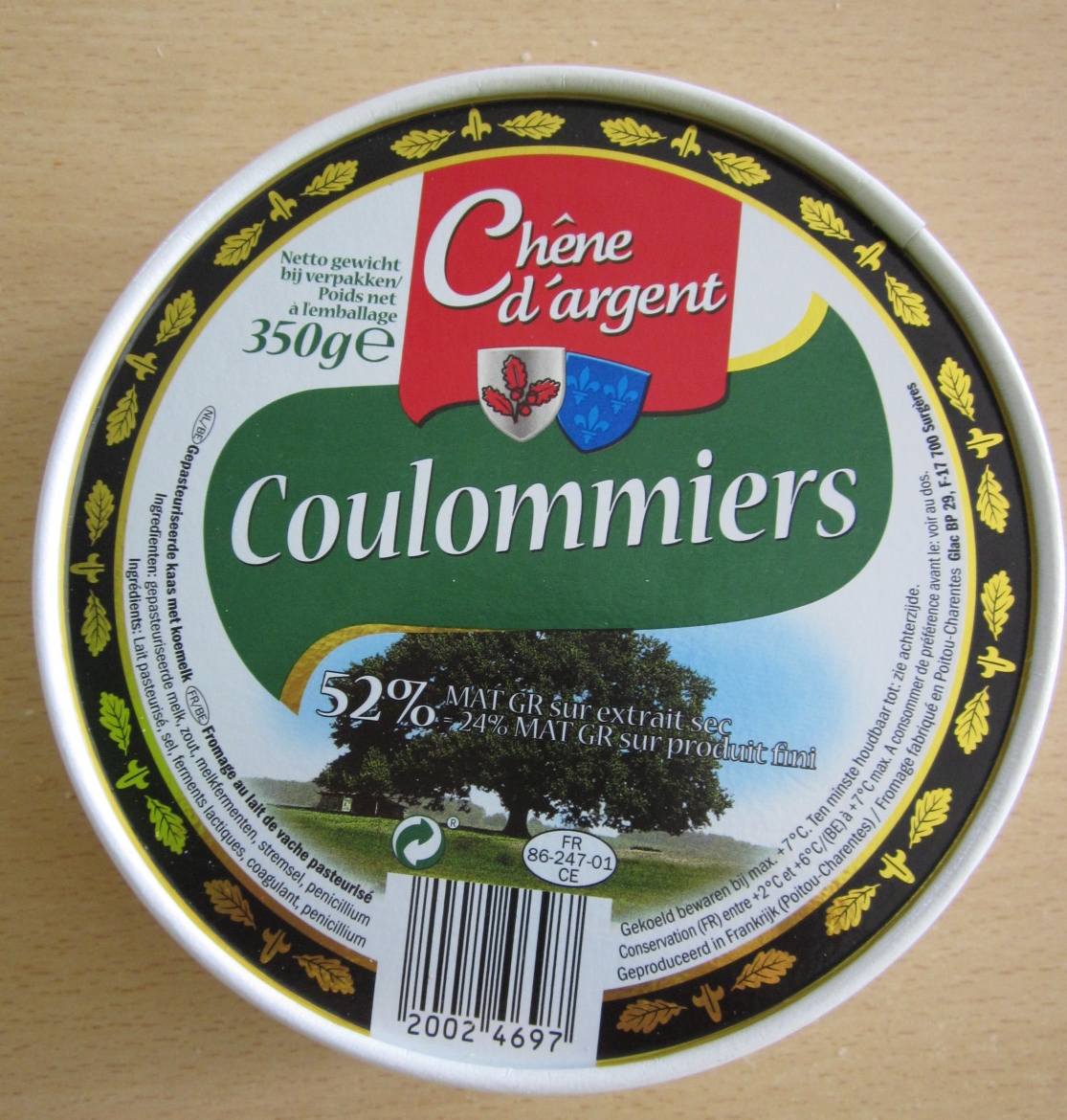 This Camembert was quite good when you let it sit out for a while to soften. 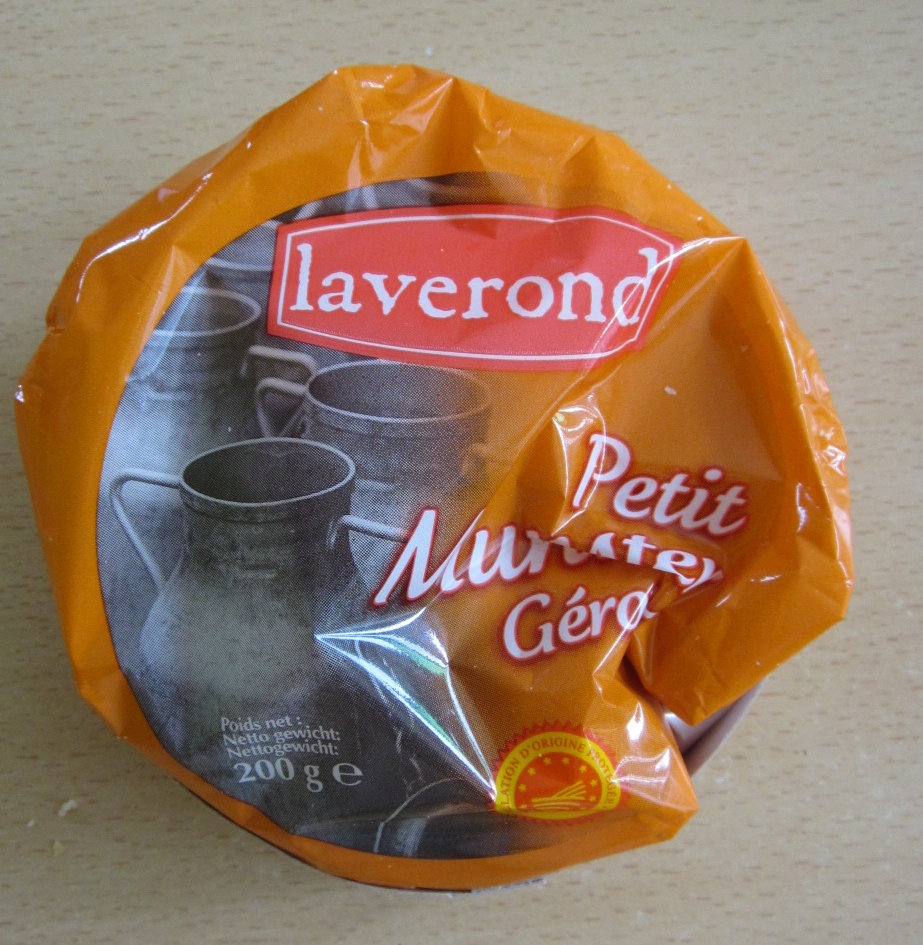 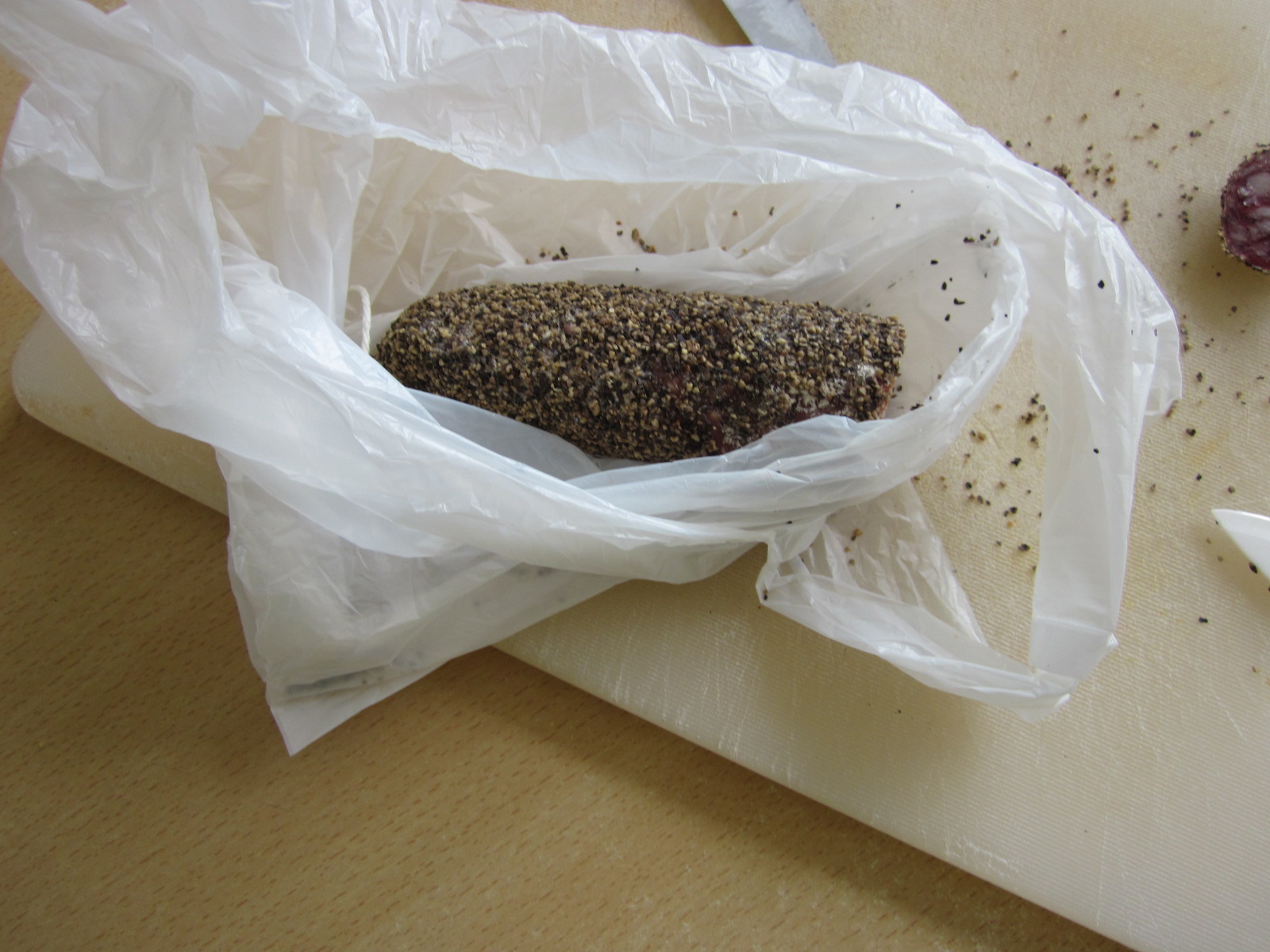 A hard sausage coated with pepper that we got at the market. It cost about 3 euros. 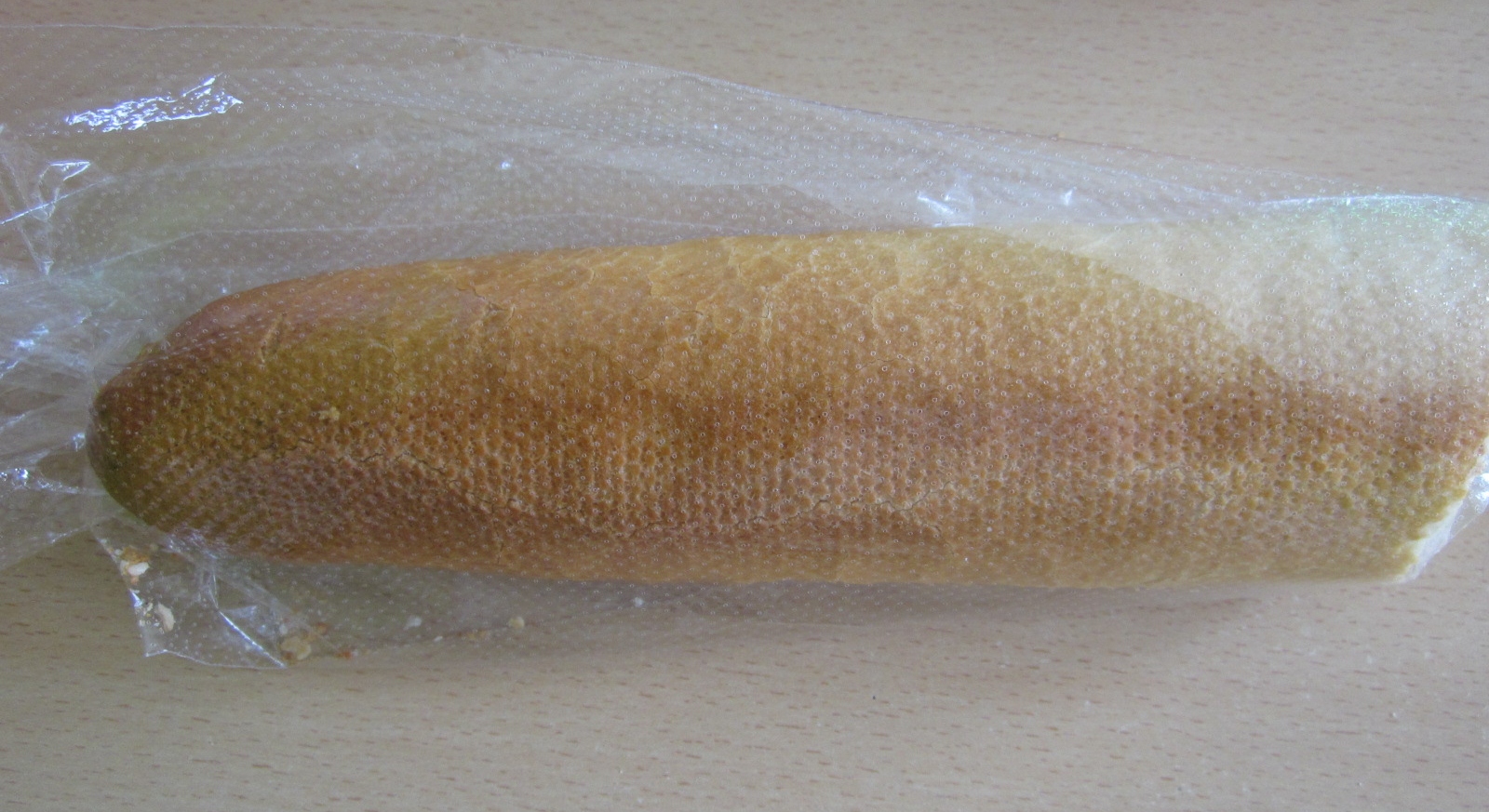 Most mornings I would walk up to the local bakery to get bread but occasionally we got it at a supermarket. It was still good. The French don't know how to make bad baguettes. Interestingly on Sunday mornings, the bakery only seems to have male customers. The wives are probably still in bed. 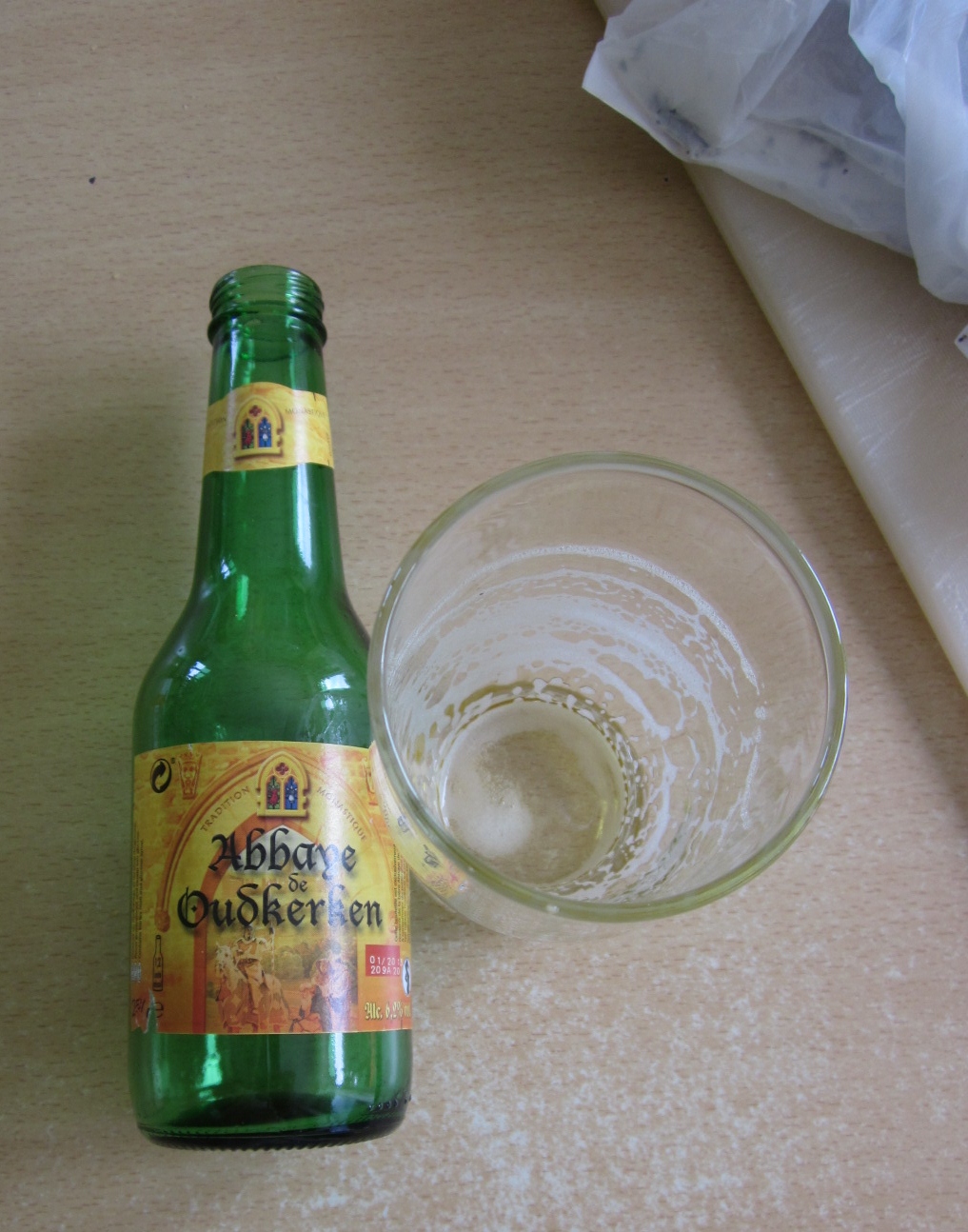 We drank this beer for lunch. Each bottle held a quarter litre (250 cl) and it was very tasty. The muesli I ate for breakfast. Not quite as good as the stuff I get in Australia, but not bad. 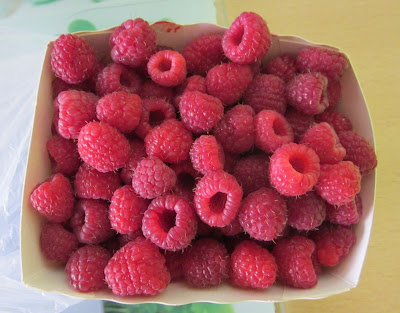 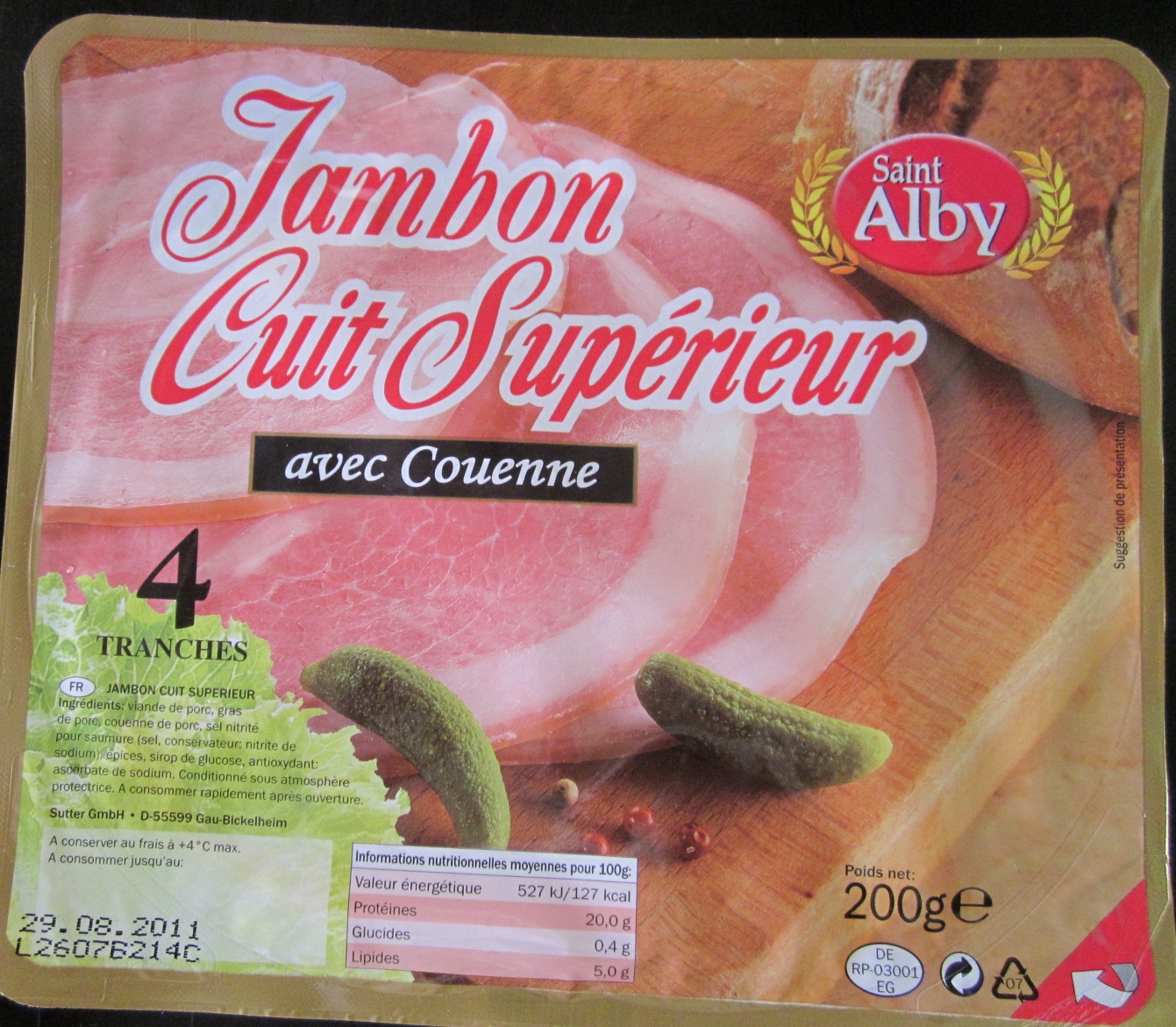 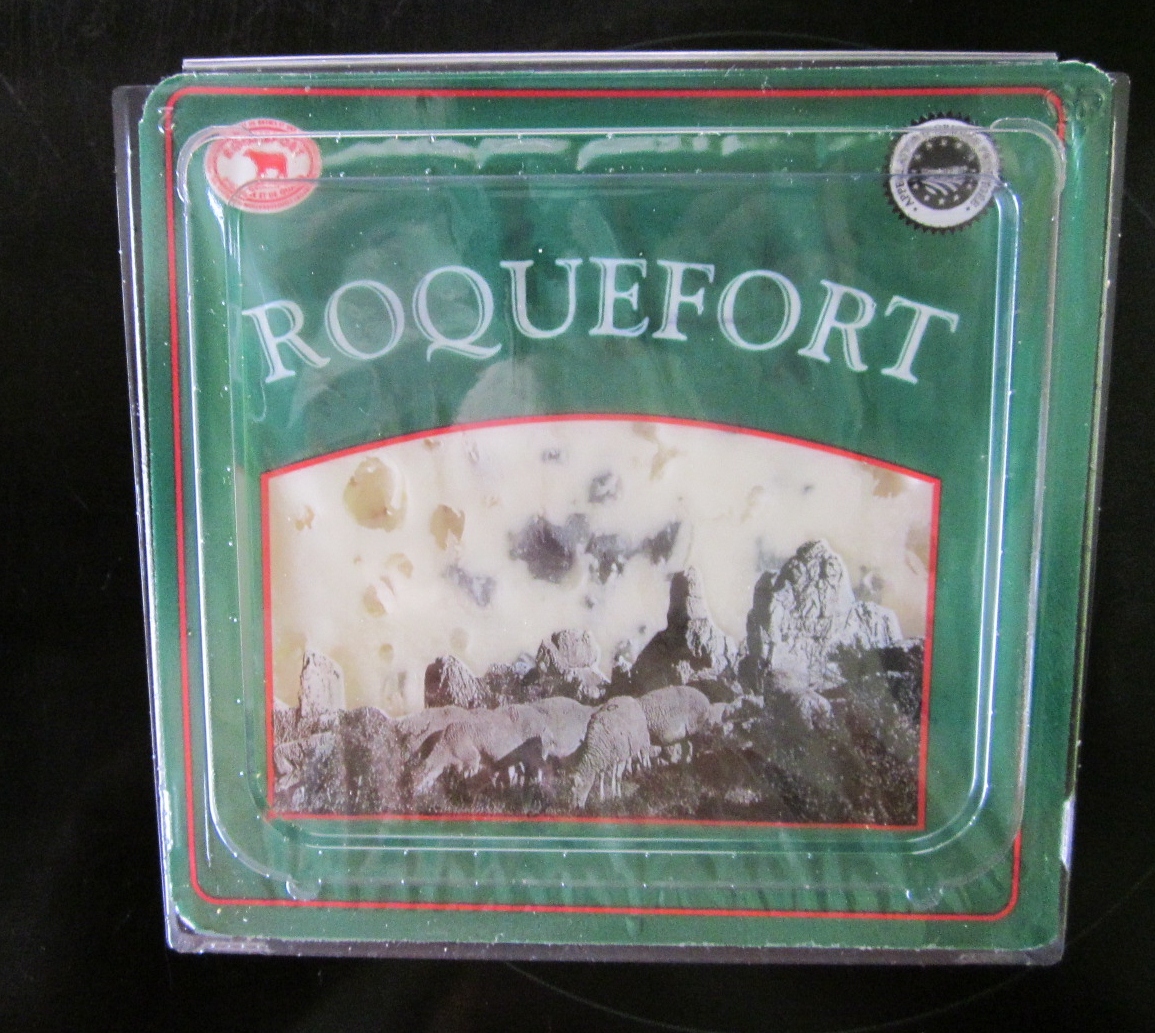 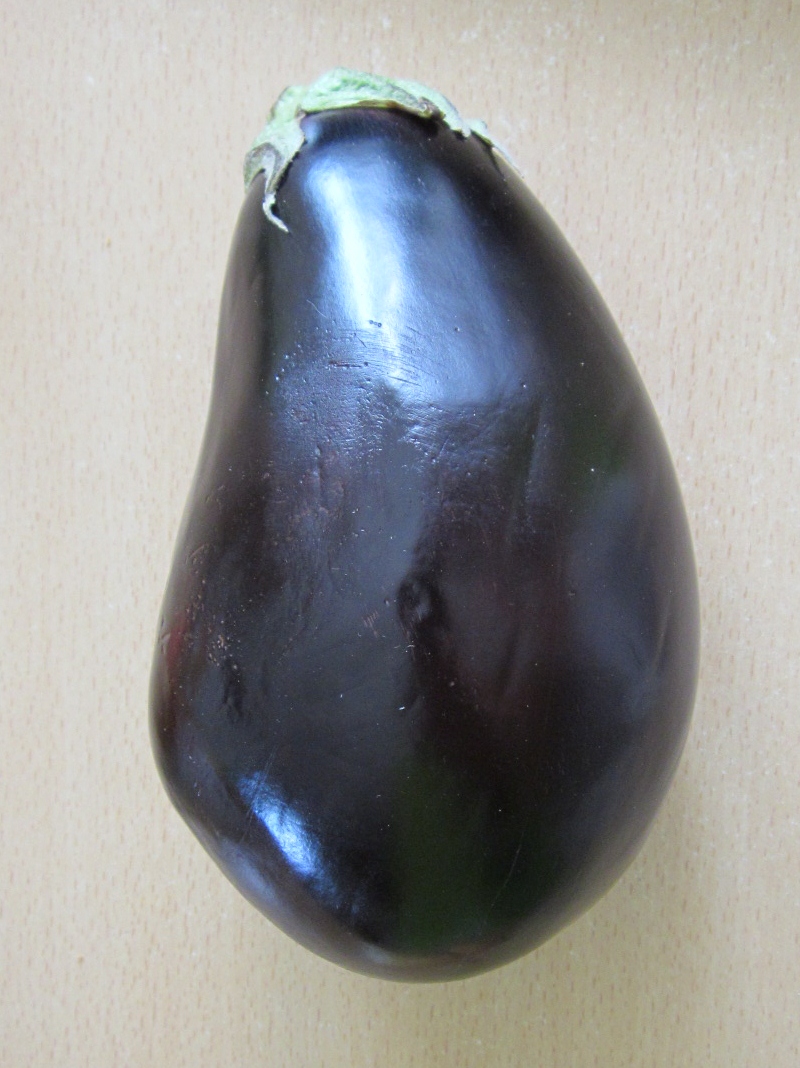 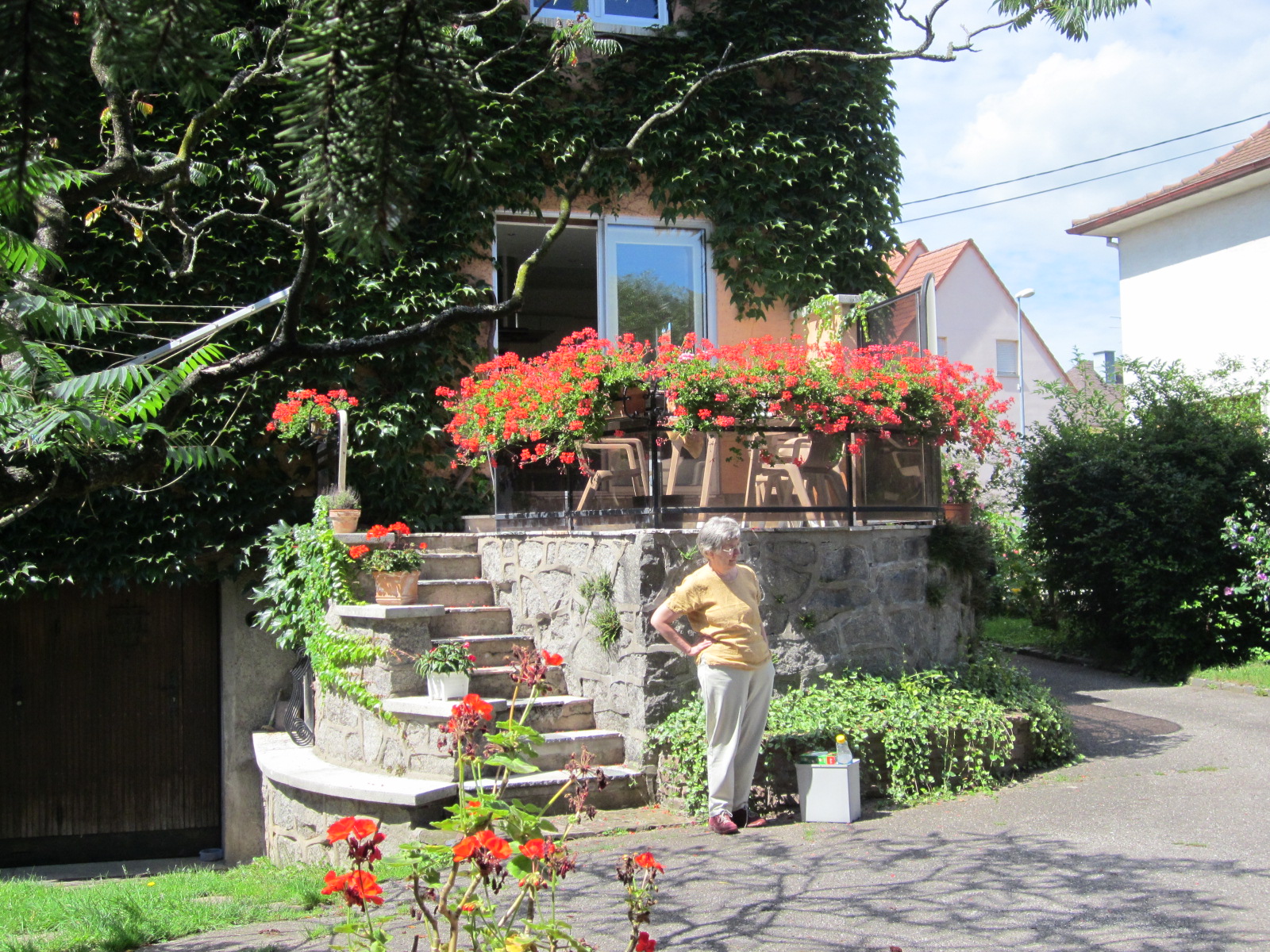 Marianne out in the backyard in front of the terrace. 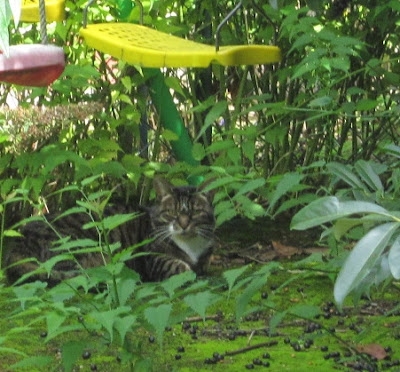 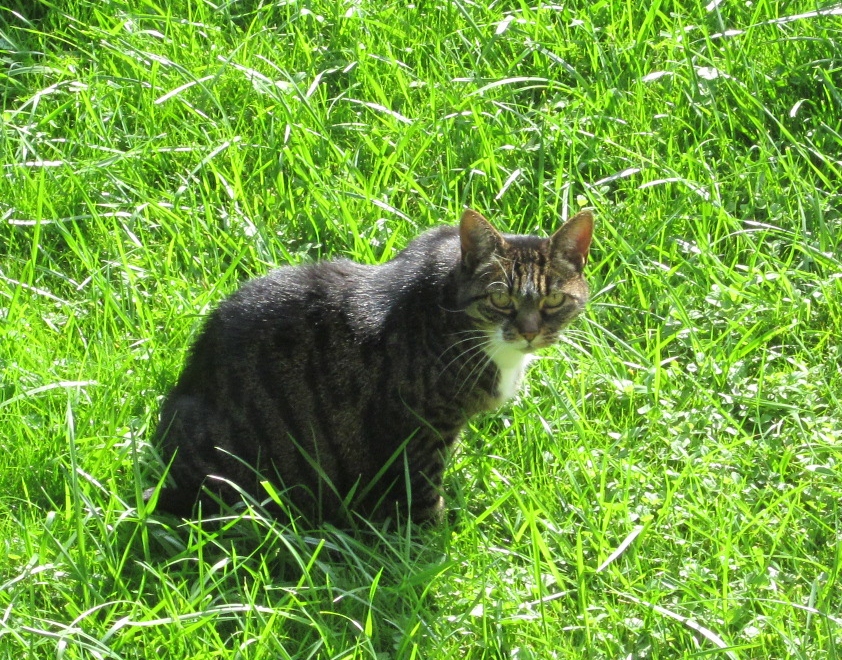 The exchange family had a cat called Capsul who took one look at us when we arrived and promptly fled. Marianne did leave food out for it and towards the end of our time there, it became more visible, but it wouldn't go back in the house. 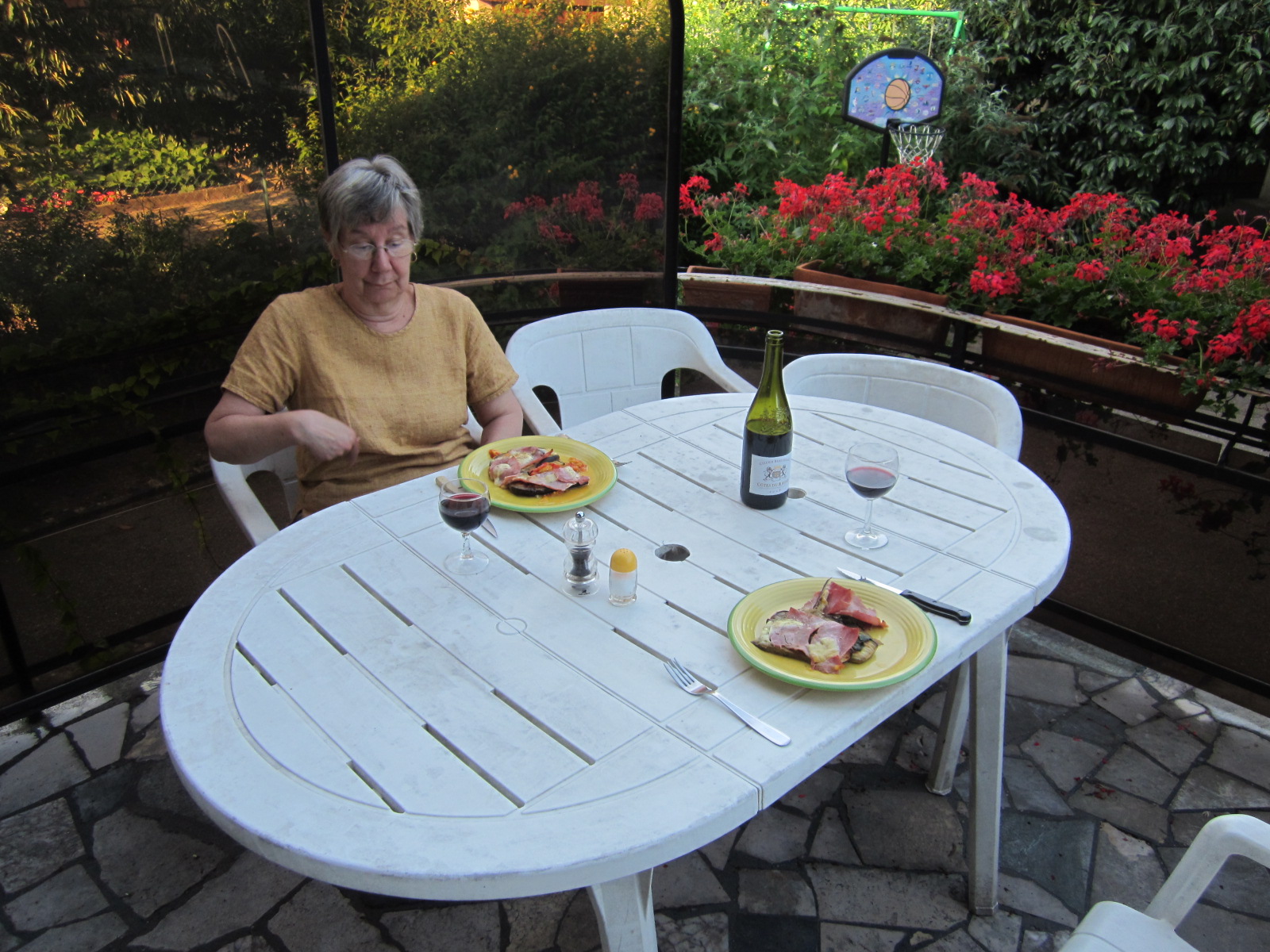 Dinner on the terrace. 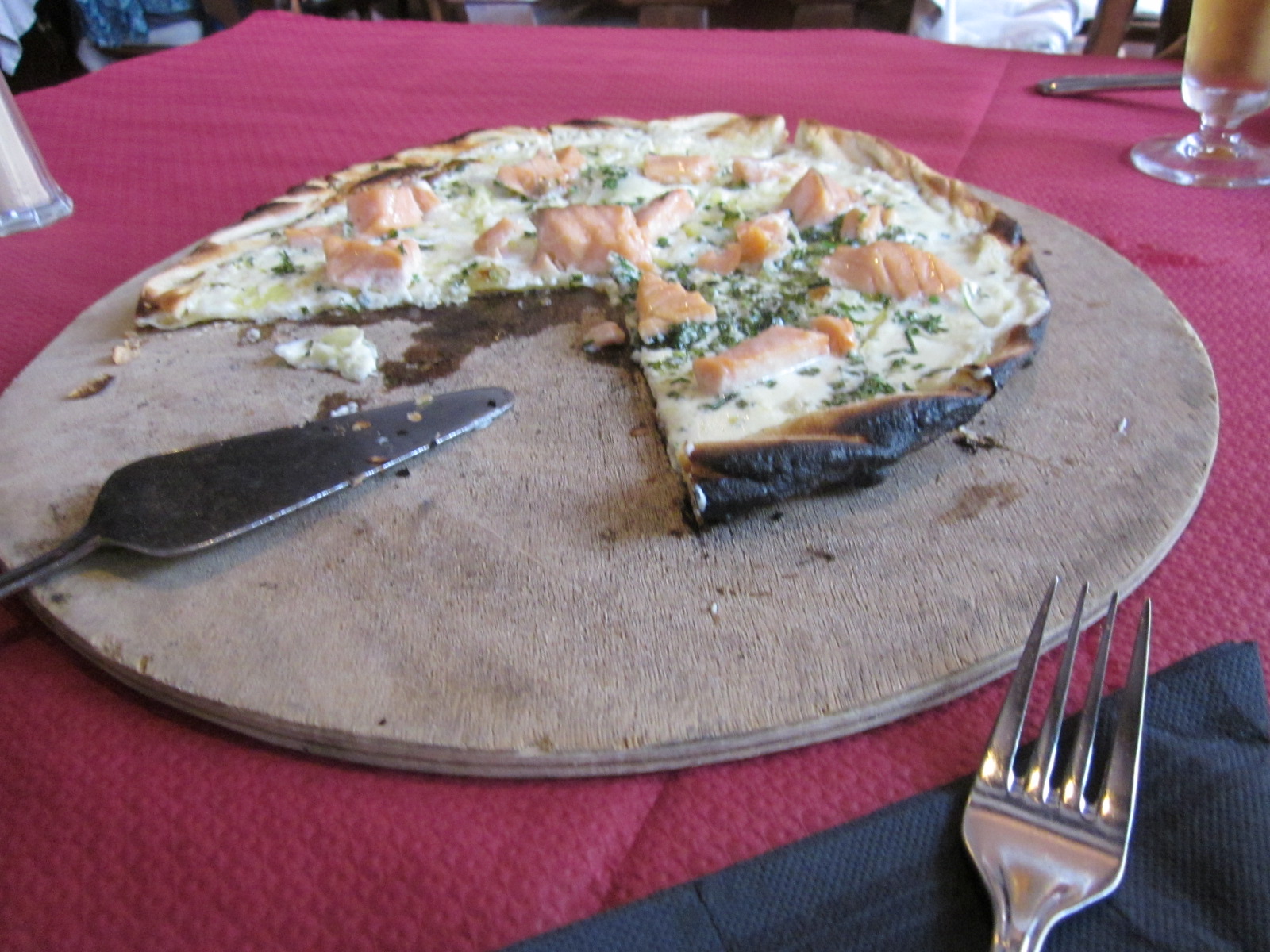 A tarte flambee which is a specialty of Alsace. We went to a restaurant in Kintzheim for lunch to try one and most of the other customers were having them as well. It's similar to a pizza but different. The crust is very thin and instead of using mozzarella cheese, they use creme fraiche. We ordered one with smoked salmon and it was absolutely delicious. As you can see, it came on a round piece of plywood. Luckily we arrived early and had a great table by a window where we could look out at the street. The restaurant then filled up and some people were having huge meals where each person started off with a large tarte flambee as a starter and then moved on to the rest of the meal!

I will be trying to make one now that we are home and I have found this video that explains how to make creme fraiche. 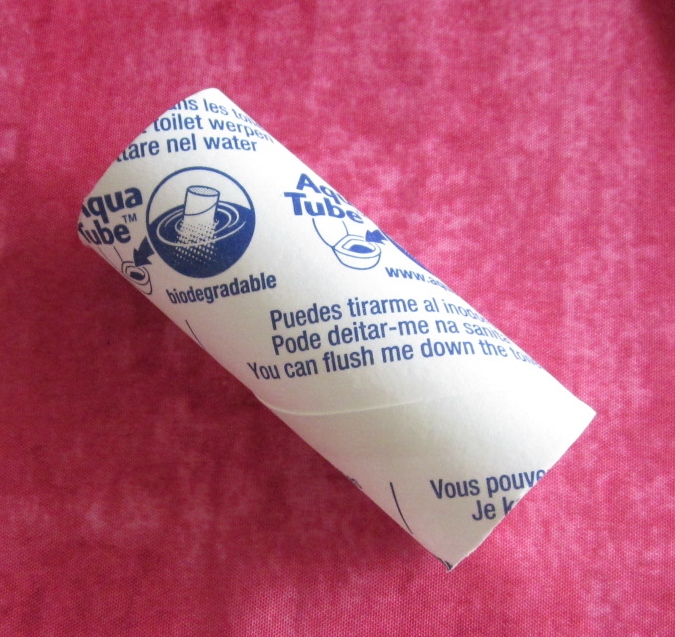 Finally, it seems most of the toilet rolls in France are flushable. It seemed like this blog on food was the most appropriate blog for this photo.