Paris, we invite a homeless couple to dinner

Those of you who have been to our house or drive through North East will probably have seen an older couple walking every day through the town or just south of it on Route 272. The couple are Herb and Arlene and they are friends. I met Herb years ago while I was working at the Community College. He retired a bit over ten years ago and they usually go on a wonderful trip very year. 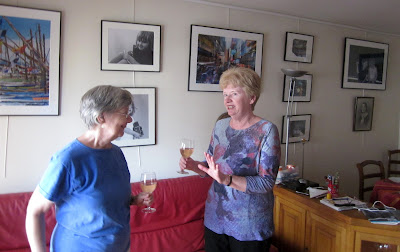 When I see them out walking I usually stop to see what they are up to. Earlier in the year they mentioned that they were doing a cruise around the UK but they were finishing up in Paris. Initially they were supposed to go to London but their trip coincided with the Olympics and Paris sounded a whole lot better. I discovered they would be in Paris while we were going to be there and so I invited them to dinner. We arranged for them to be outside the apartment at 6pm on the 6th of August. 6 on the 6th seemed to be easy to remember. 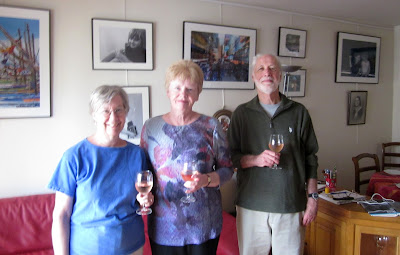 At about 5:45 pm we went downstairs to find that they were already outside. We duly invited them to come inside and naturally there was plenty of wine, food and good conversation. 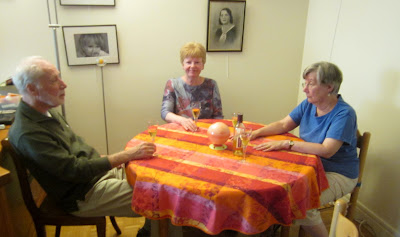 It was a great evening sitting around the table exchanging stories about what we had done over the preceding weeks.

The part that still boggles my mind is that next week I will probably see them again as they walk up to or back from North East and we will talk about our dinner in Paris. Globetrotters are us.

So you are wondering about the 'homeless' title. Some years ago, Herb told me a story that his neighbour had been asked by somebody whether he knew who these homeless people were who were walking around North East every day. Herb and Arlene were much amused by this as was I. Herb is one of the only people who rivals me in the 'homeless' look.

I did offer to give Herb a foam cup so that he could do a bit of begging on the way back to the Metro but he declined. Beggars are everywhere in Paris.