Train from Udaipur to Amjer and jeep to Pushkar

Happy likes to keep us in suspense about what time we will have to rise to catch the train. Typically we have to meet in the lobby an hour before the train/ bus departs. It allows time for the tuk-tuk or taxi to take us to the station and any other unforeseen delays. We all seem to be on-time. 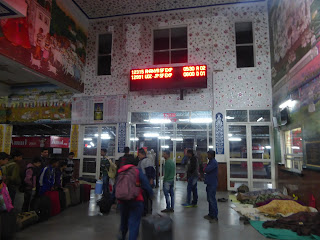 The day before was Shiva's birthday and a cause of celebration. Somebody had set up a monstrous loud-speaker system and played loud music all day. It had a particularly thumping bass that almost shook the building. Fortunately it was not too bad in my bedroom but other rooms were quite close and it was awful. We presumed the noise would stop about 9 pm or 10 pm but it kept going so the older Anna went down and asked them to stop which they did. It's hard to know what to do when religious customs are involved.

Because I was planning to use trains for my journey to India a year ago, I know how to look up Indian train timetables so I knew the train would leave at 6 am. Alejandro and I got up at 4:30 am. If you are coming on one of these tours, bring an alarm.

Alejandro and I shared a tuk-tuk taht really struggled with our combined weight. For much of the trip we were climbing a hill and the other tuk-tuks zoomed past us. When our driver reached the top of the hill, he turned off the engine and coasted down to the station. 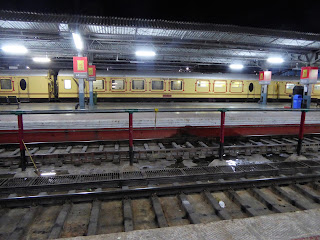 The Maharaja Express train was sitting quietly at the station. My 22 day tour cost about $1000. Look at the prices for this train. 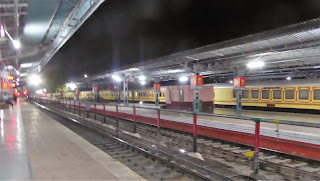 At 5'6", the Indian railway gauge is the widest in the world. The ride is quite comfortable. 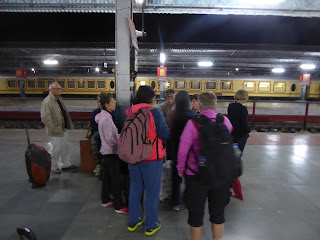 I suspect the people on my tour are having a much better time and getting closer to the real India than those on the luxury train. Still, if they offered me a free ride, I'd accept though I would probably lower the tone. How dare they allow riff-raff on this train! 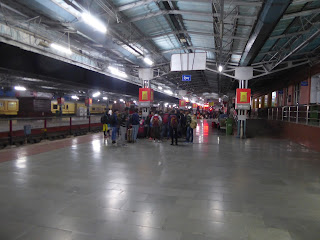 Most of us bought chai or coffee from a nearby stall. It was quite chilly on the platform and I put on my jacket. 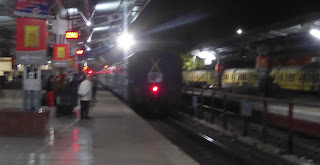 Our train backed in and it left close to on-time. 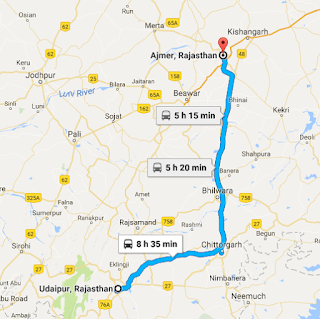 Shortly after sunrise. Surprisingly the windows were pretty clean and we did not have to go outside to clean them. The train was not full and we were able to move around a bit. 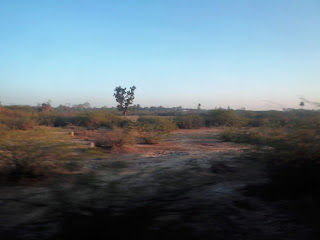 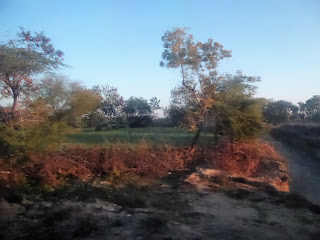 Prior to the trip I had visions of people everywhere in India. In the cities that is true but in the country, it is almost as empty as Australia. 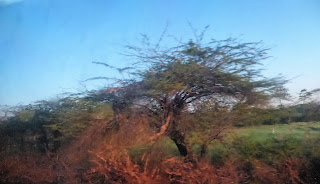 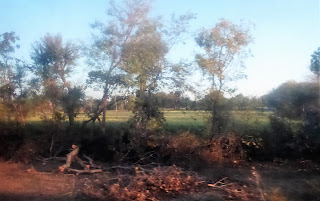 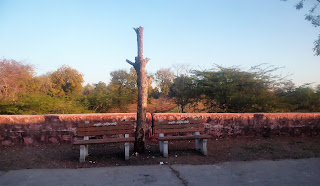 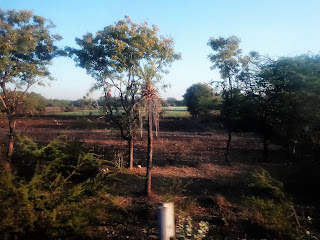 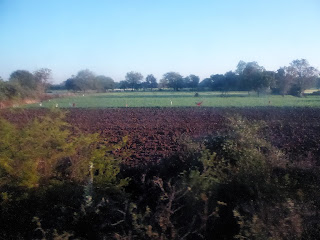 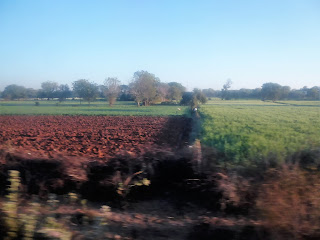 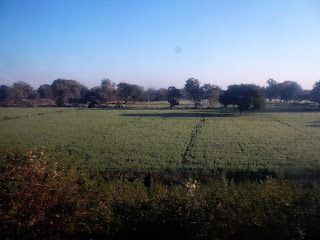 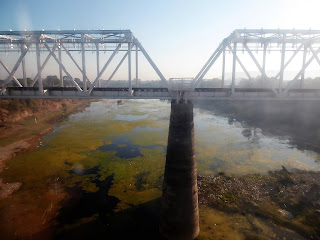 A bridge over a large river. 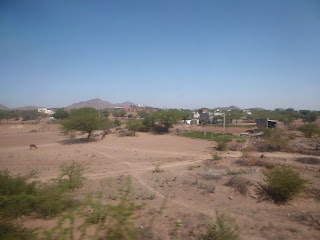 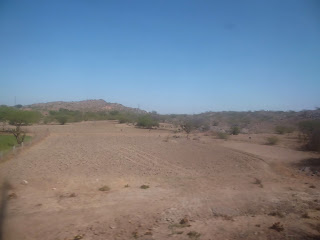 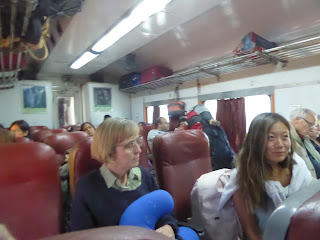 Grace and Anna. I have realized that Anna is in quite a few photos. This girl is very social and is always moving around, but she is a lot of fun.

The carriage was 2nd class and air-conditioned. The seats were ok but not all that comfortable. I preferred traveling in the sleeper since it was easier to move around than in the airline type environment. 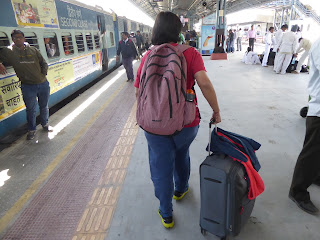 We reached Amjer just a little late and Happy led us along the platform.

Note that Happy is using a rolling suitcase. Intrepid recommends using a back-pack but I estimate that half of the group are using rolling suitcases as well as a day-pack. You do have to carry your luggage up stairs every now and then, particularly at stations and in the hotels. 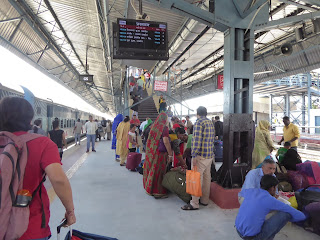 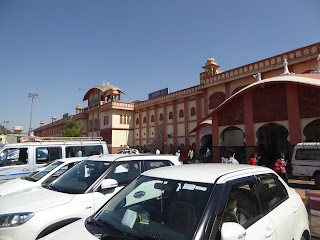 Happy found the vehicles that were to take us to Pushkar. 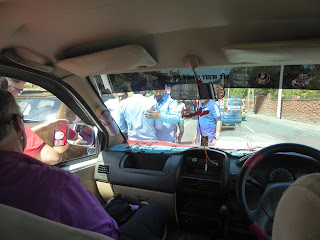 Despite the bedlam of Indian traffic, I had not seen any accidents until a car suddenly moved out right in front of us and it's back fender was damaged. Fortunately the traffic was moving very slowly but there was a good argument between the two drivers. Happy told us that the Police do not bother with these bingles. The drivers have to sort it out themselves.

The traffic jam in Amjer was horrendous since it was lunch time. 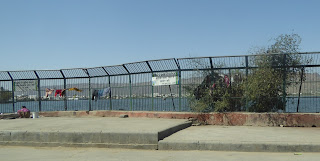 We passed by the lake near Amjer. 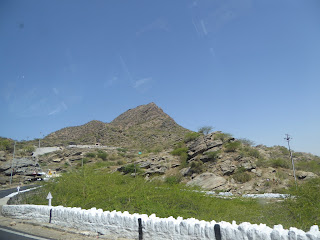 Soon we were climbing up into a mountain range with lots of curves. 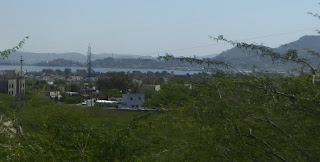 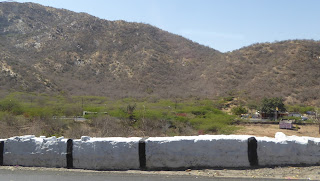 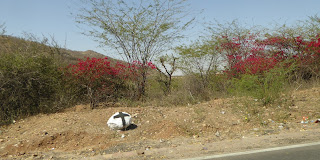 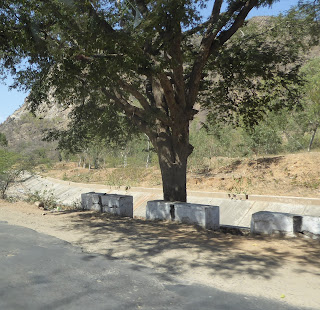 Not the most pleasant of trips, but at least we arrived ok.