Dinner in the Marrakech market

The major feature of Marrakech is its huge market. Intrepid had arranged for another van to take us there and pick us up later. Downtown Marrakech is quite modern and you could easily think you were in France. There is a lot of traffic. 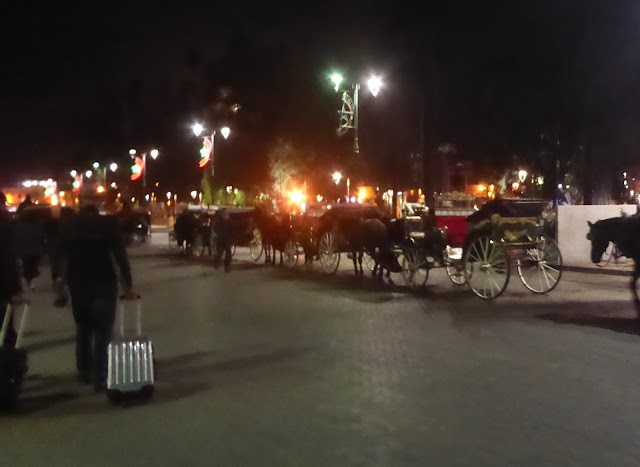 Horses and carts for the tourists. 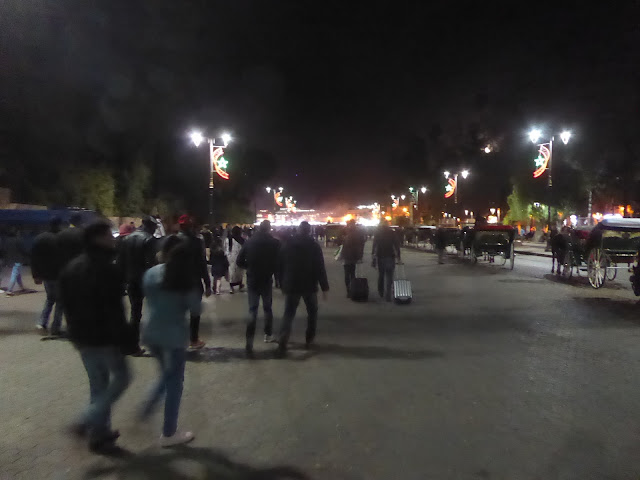 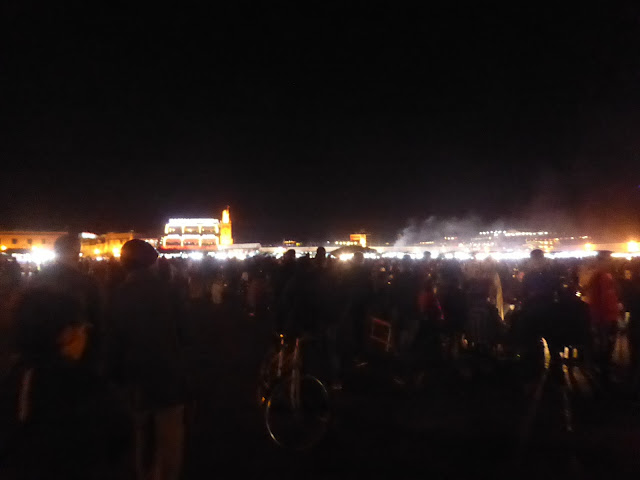 The square was crowded with people. It was a Friday night and apparently it is even busier on Saturday and Sunday.

One section of the square has numerous small bands pounding out music. The din was horrendous which you can hear in this video. 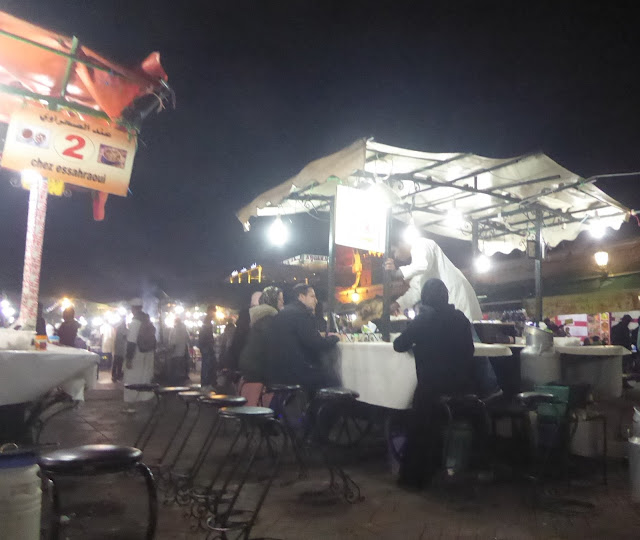 The character of the market changes after sun down. After dark, the food stalls open. 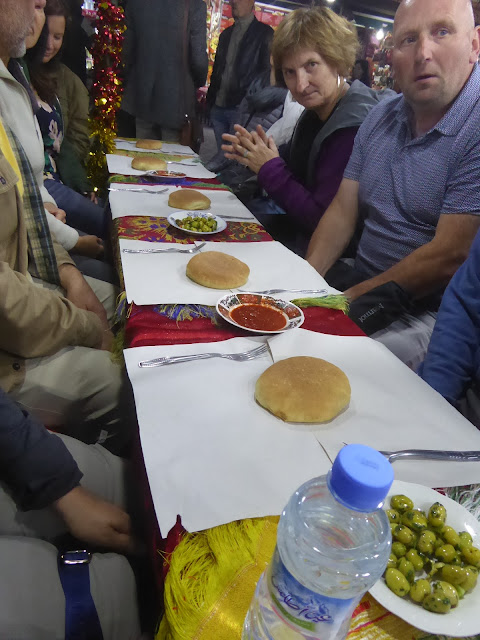 The tour company Intrepid picks up the bill for this meal and Mustapha ordered a range of typical dishes for us. Initially there were olives, a spicy dip and some bread. Poor Rich was still not entirely well and his wife Lou was a cheeky as ever. They live in Christchurch NZ and had to have their house replaced after the earthquake. 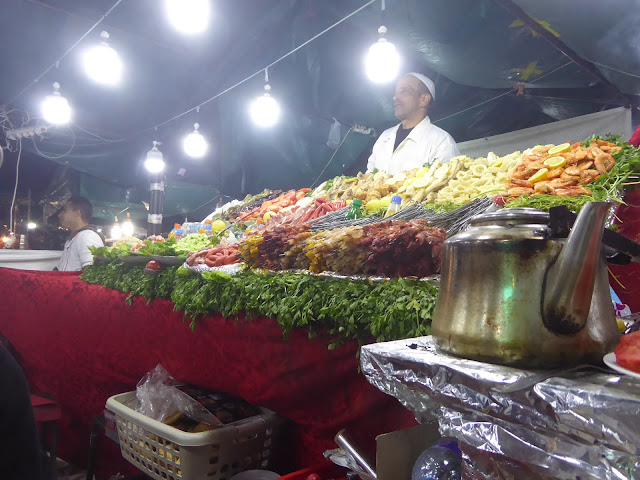 There were quite a few blokes involved with this food stall. There was one cook who worked flat out. There were several waiters who delivered the food as well as a couple of dish washers. Then there was this one bloke whose job appeared to be rearranging the items in front of him every few minutes. It must have been punishing work for him rearranging the octopus rings. 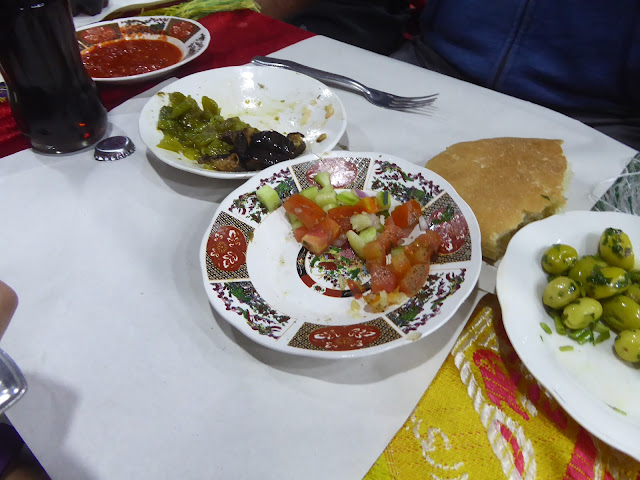 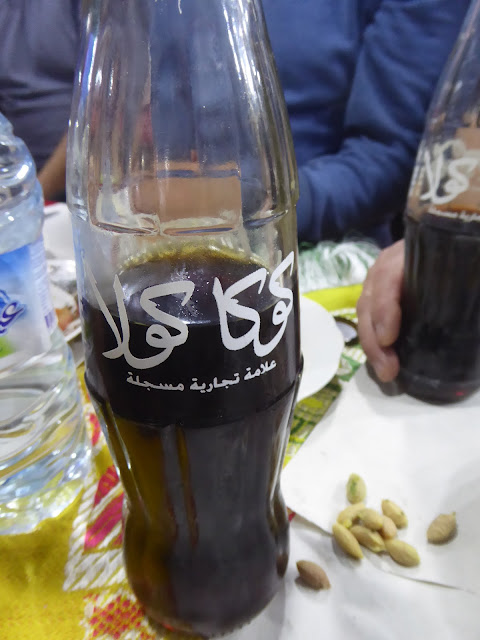 Beer was not available so I tried a Coke which has this label. On the other side is the regular Coke sign. It tasted like Coke. I realized that I had not had any Coke for years. 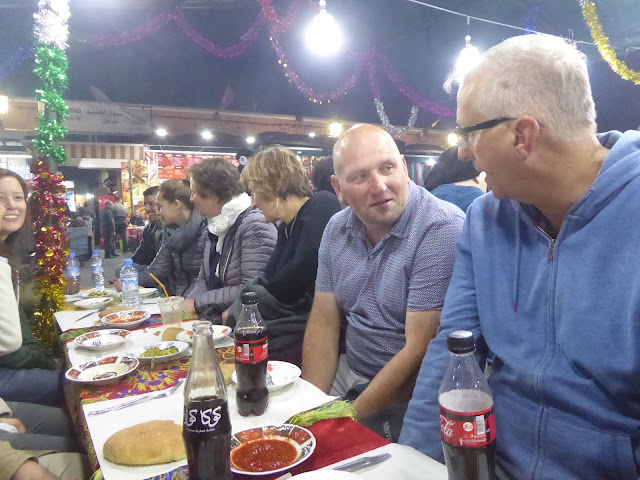 Our group has really bonded well. The makeup is the same as for the group in India last year. Three couples, a mother and daughter, two younger women and two single males. Twelve is a good number. 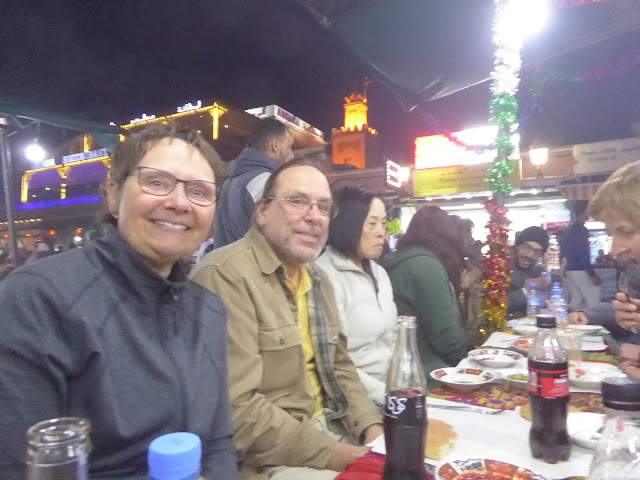 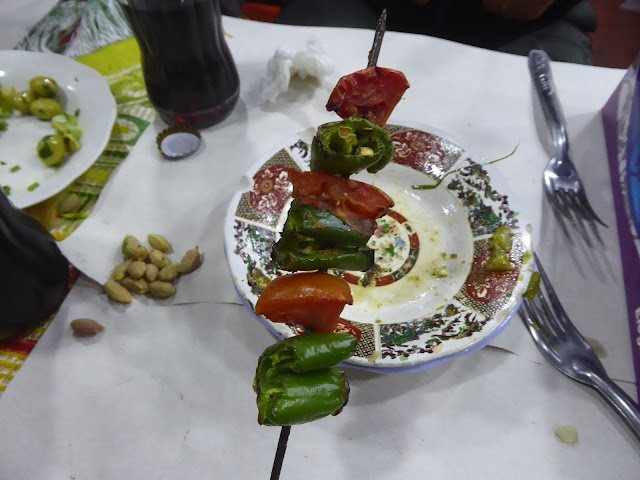 A skewer of peppers. 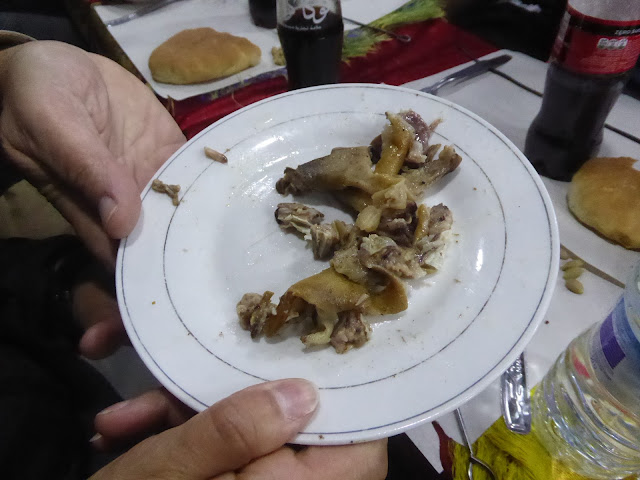 Mustapha headed off to another stall and returned with a plate of meat from a sheep's head. It was quite greasy and not all that wonderful. 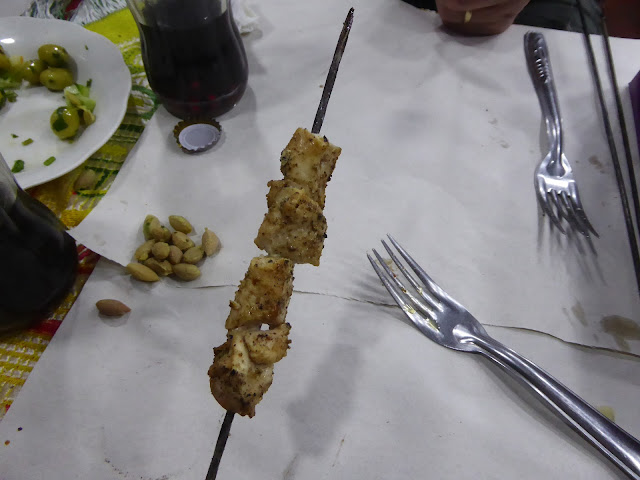 The grilled chicken was much better. 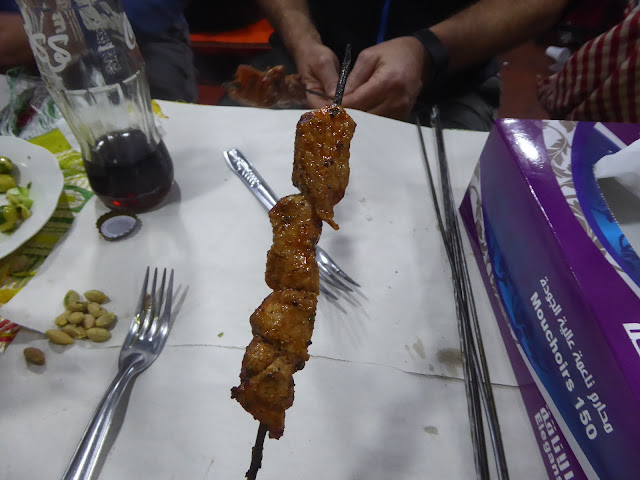 And the grilled lamb was even better. 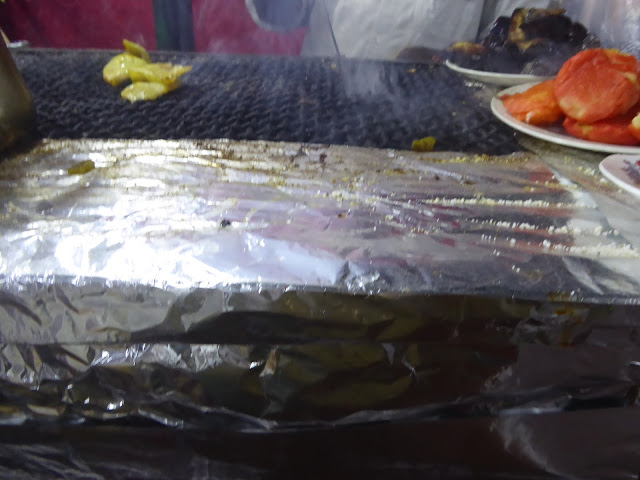 The food was all cooked on a grill over hot coals. 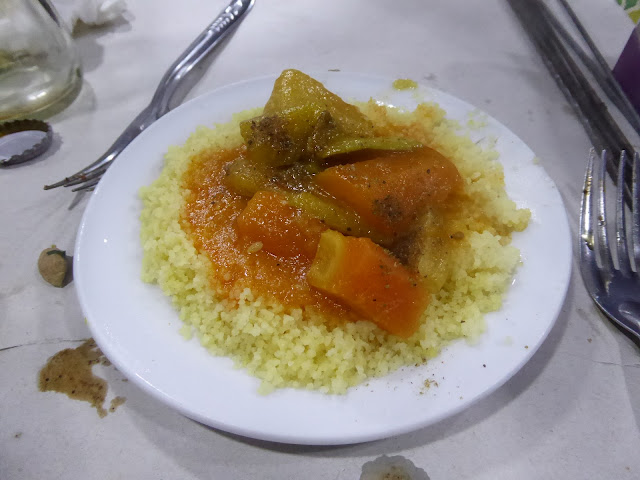 Some couscous with tagine vegies. The couscous was the worst I have had in years since it was not fully cooked. The vegies were good. 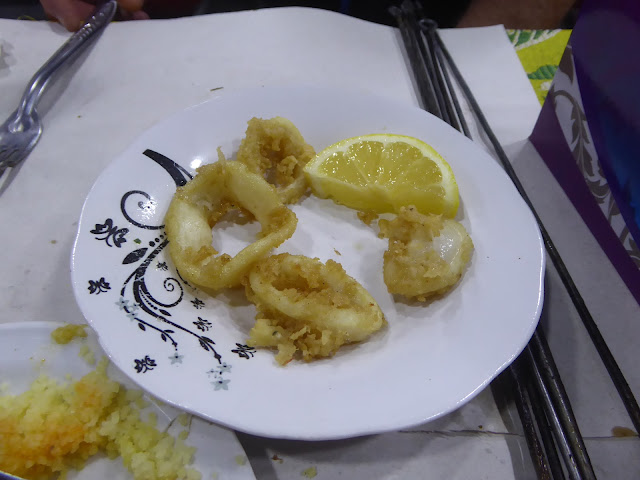 The calamari was ok but nowhere near as good as in Casablanca. 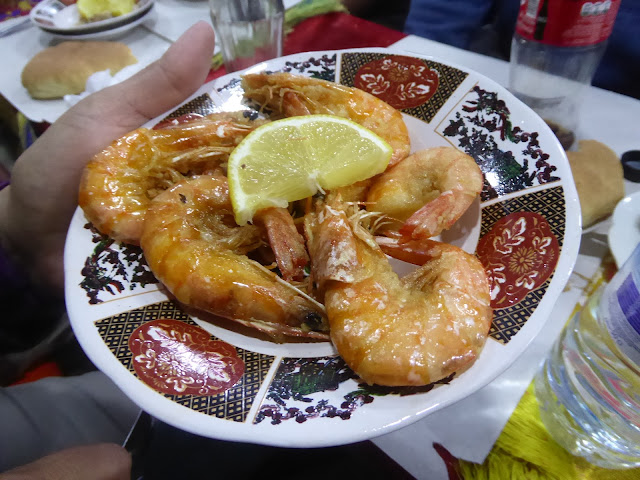 The meal ended with shrimp (prawns) but they were overcooked and dry. 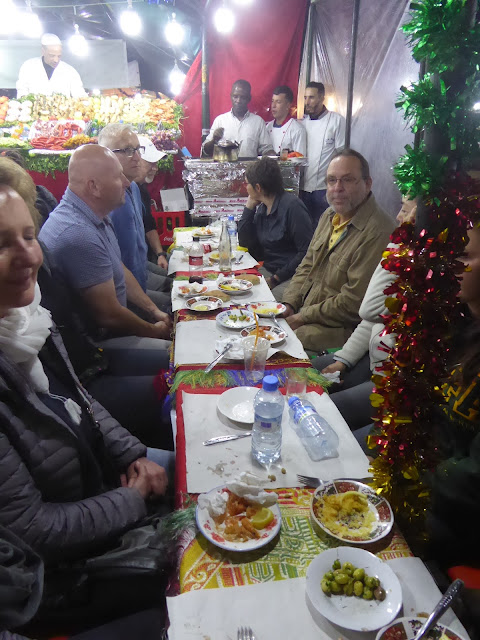 Our table with the cook and waiters at the other end. 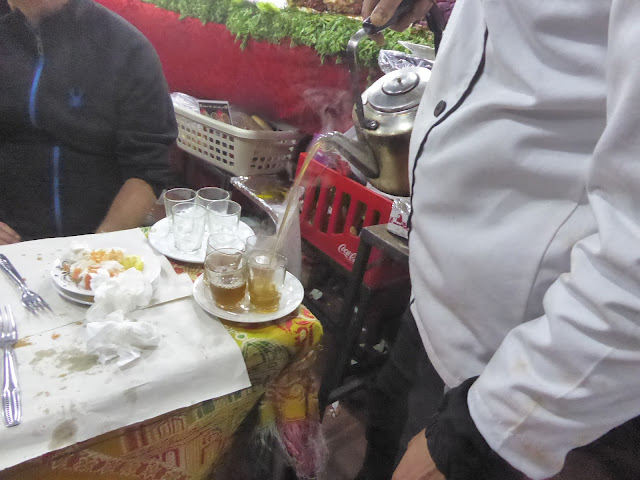 Some of us had tea. 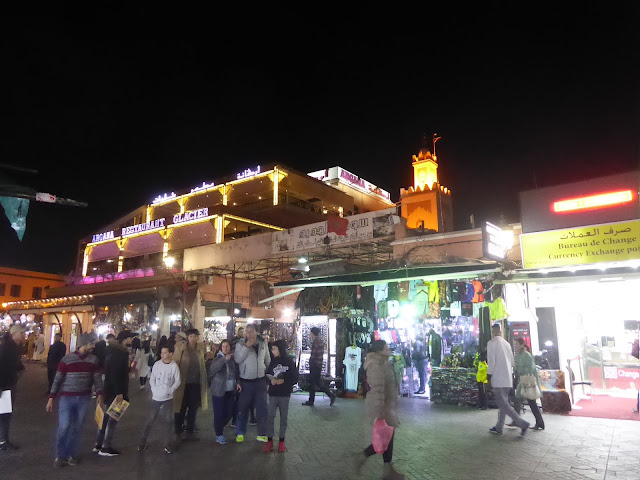 Mustapha then led us though a different part of the market and back to the bus. 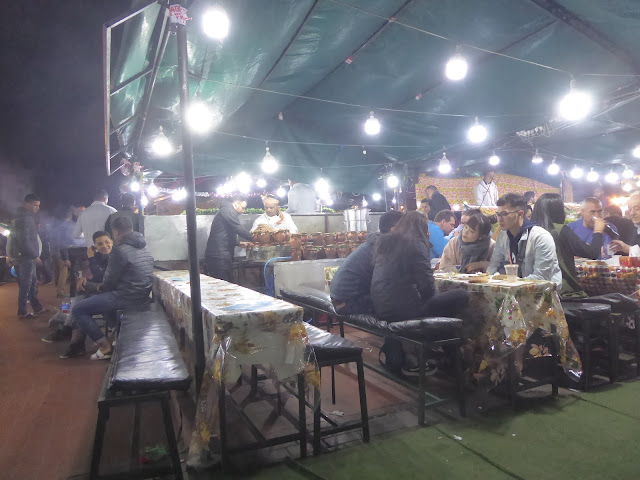 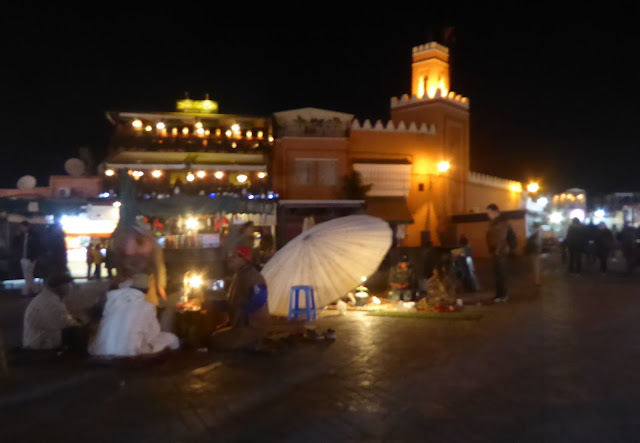 The umbrella covers a fortune teller. Apparently the vendors and hawkers are very aggressive and simply taking a photograph of somebody needs to be pre-negotiated. You need to be very careful. 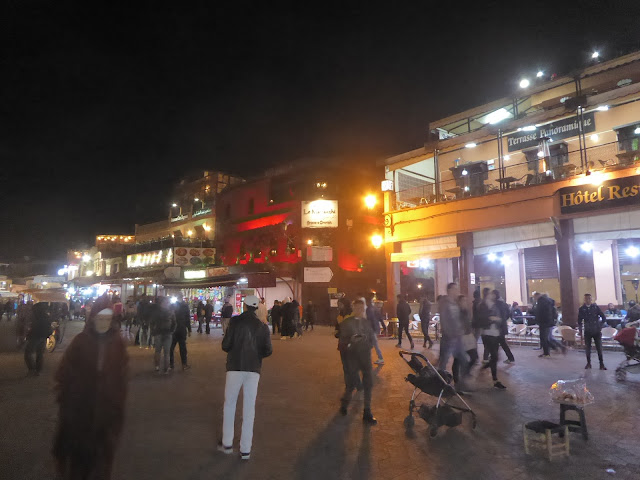 It was an interesting place to see at night and I am glad I went but I have my doubts about going back in the day-time. I have been in a lot of markets on this trip and I don't really need to visit another.

We all gathered back at the hotel and most of us had some beer or wine.