The tour was over and we said our goodbyes to Mustapha and Mohammed as well as our fellow group members. I have been so lucky to have been with three groups now and all of them have got on very well. I'll have to come up with a reason other than 'we all drink bottled water'.

Shelley spoke for the group when we thanked our two guides and I was so pleased that she chose our visit to Mustapha's parents as the high-lite of the trip. 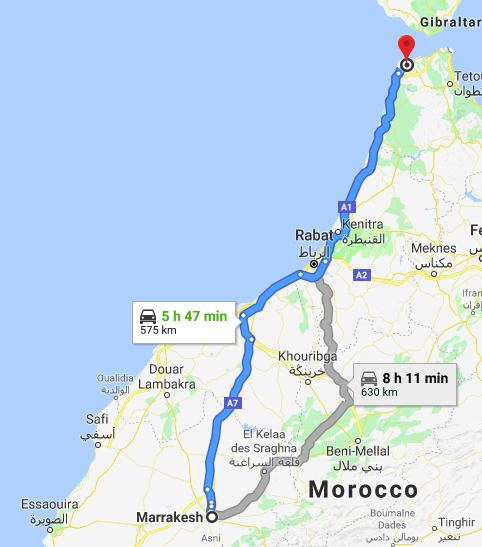 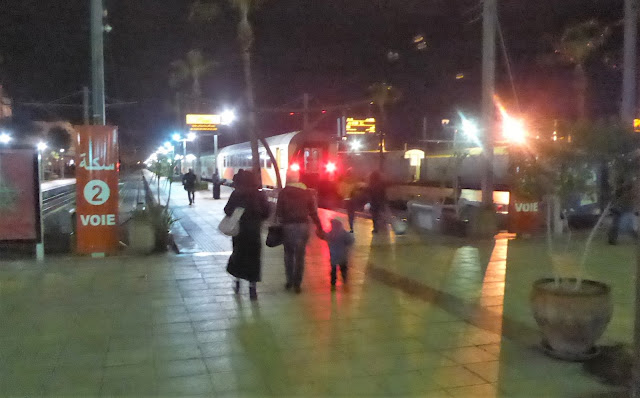 I was initially planning to take a train at 8:20 but that would have me arriving in Tangier after dark so I changed to a train leaving at 6:20. A taxi was lurking a hundred yards away from the hotel so I took the taxi to the station. Here is the train waiting for me. 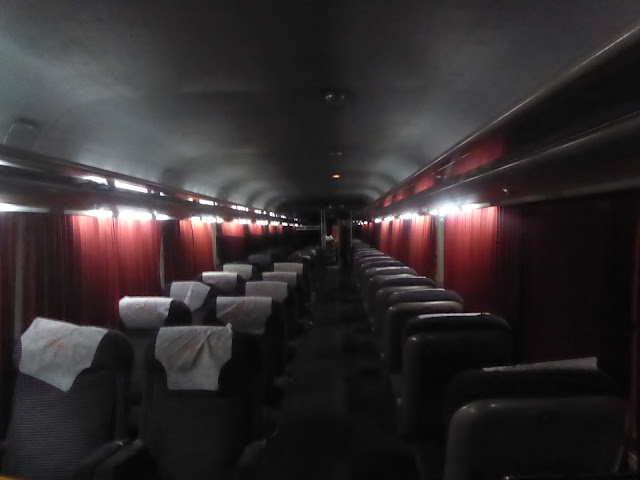 A first class ticket to Tangier cost about $33 while second class was about $25 so I lashed out and traveled in this rather nice carriage. I had one of the seats on the right. 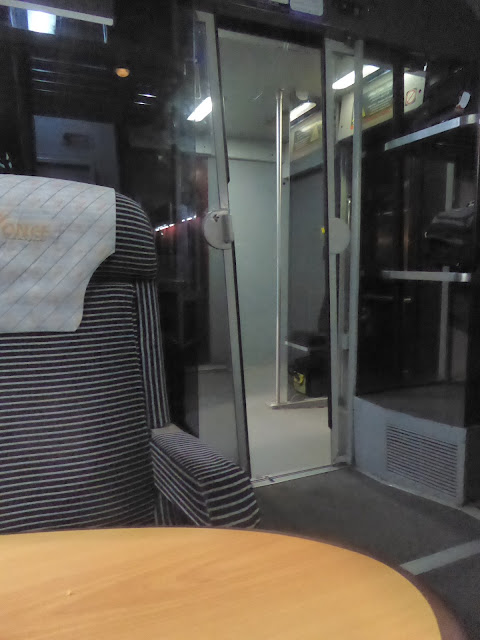 You might notice that the door is wonky and several men including the conductor, tried to straighten it. Eventually they called in 'the brute' who gave it an almighty kick and it took notice and straightened up. It could not close however, so it remained open for the entire trip.

The carriage was mostly empty but an older woman had reserved the seat opposite me. She gave me the evil eye look to make me disappear but I survived. Eventually she moved off to another seat somewhere else. 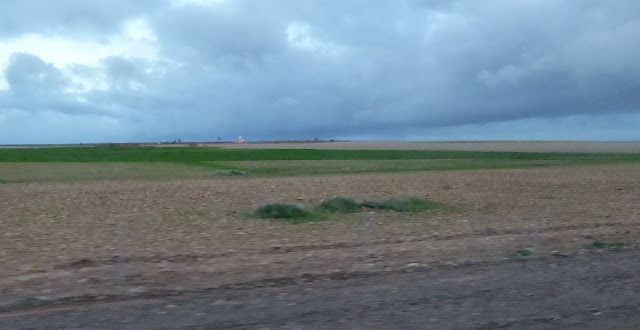 The train left on time (not five minutes early) and we were soon in farm land. 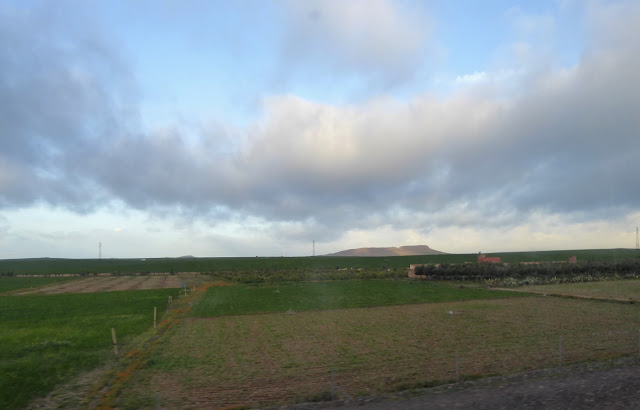 After quite some time in the drier areas of Morocco, it was a nice change to see green fields. 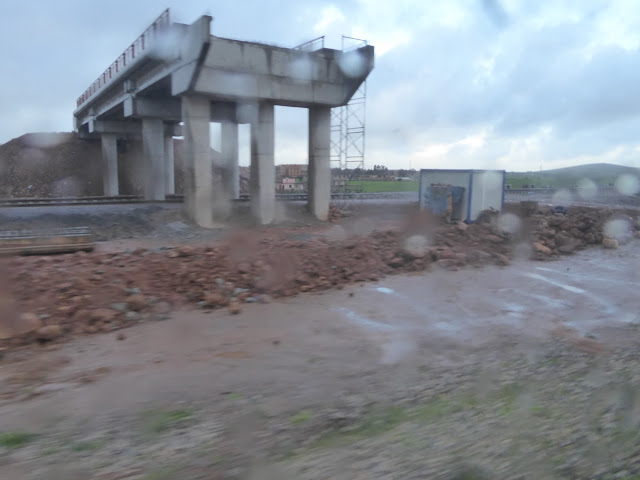 Morocco is building a new high speed rail line from Tangier to Marrakesh and here is a new bridge to carry road traffic over the train line. It had started to rain. 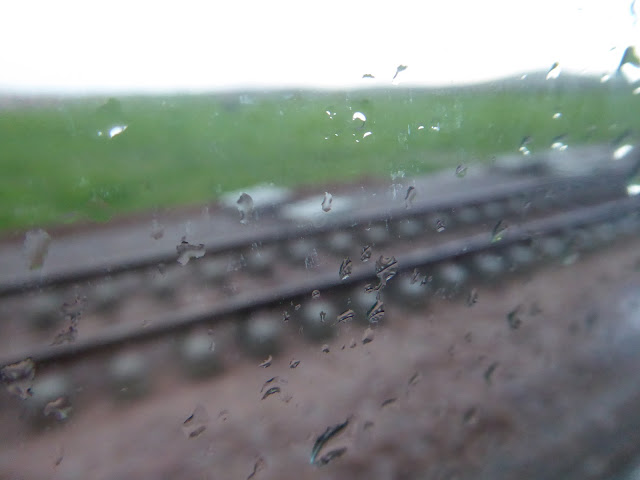 The new line and there will be two tracks. The existing line is electrified and uses French carriages and engines. I have a speed app on my phone and the train traveled at 60, 80 or 100 mph approx. 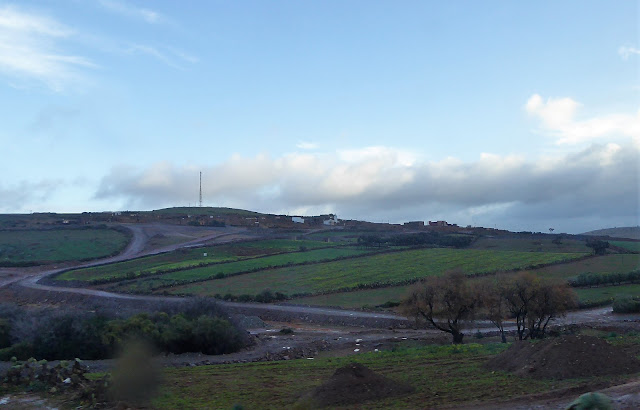 The countryside became more green the further north we traveled. By this time, I had endured a 90 minute stop at Casablanca to change trains. They are rebuilding the station and the old one has only 6 seats for waiting passengers. The second train used old style carriages and was full of passengers. A young woman in our compartment talked loudly on her cell phone for a large proportion of the journey which is really rude, whatever language you are speaking.

By the way, my cell phone maintained its internet connection for most of the journey. Morocco has cell phone towers in most locations so if you are coming here, get a local SIM card with just the data option and you will have internet just about everywhere. With all of my uploading of photos, 15 gb of data will be enough. It cost me $15. Most people will do fine with 5 gb for $5.  Most hotels provide internet but reception through the typically very thick walls is limited and then you have to have to share with all the other people in the hotel. 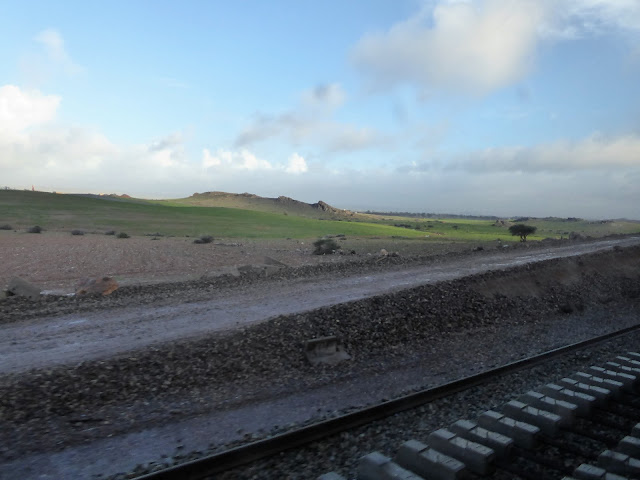 The new line is supposed to be in operation in 2018 but I think that is very optimistic. 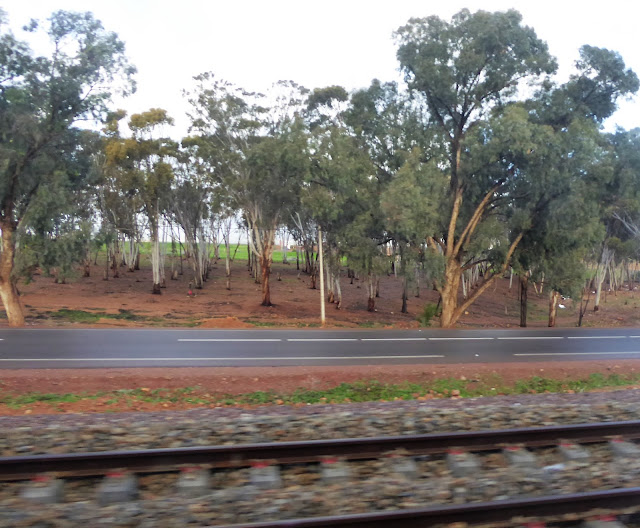 At times you could believe you were in Australia with all the gum (eucalyptus) trees. By the way, I have already booked our flights to Oz for later this year. A few nights ago I woke at 2 am and decided to check my email. There was a message from Qantas saying they were having a one day sale. Since the other airlines would match their fares, I checked and found that the flights I wanted on Air New Zealand were reduced in price as well so I did the purchase for a bit over $1000 each from LAX. Twenty-four hours later they were over $300 more each. 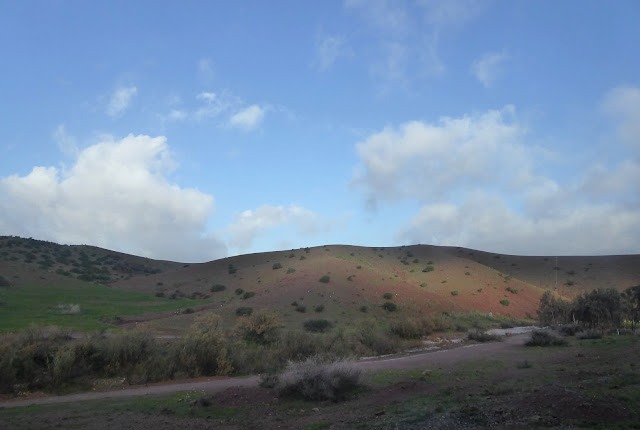 It was a pretty ride through northern Morocco. 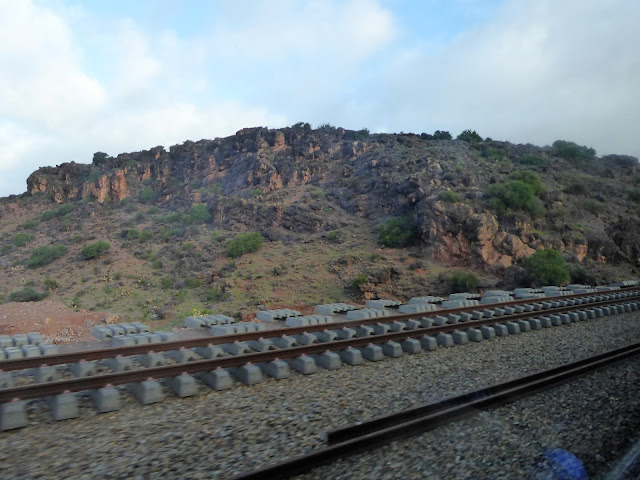 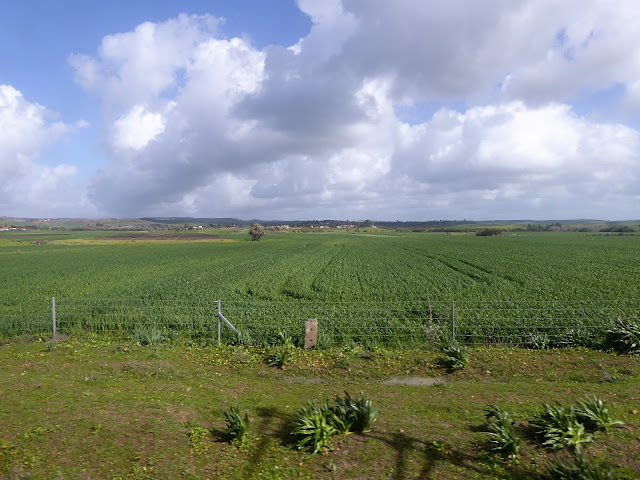 Plenty of agriculture. It rained on and off and there were large puddles of water. The creeks were flowing. 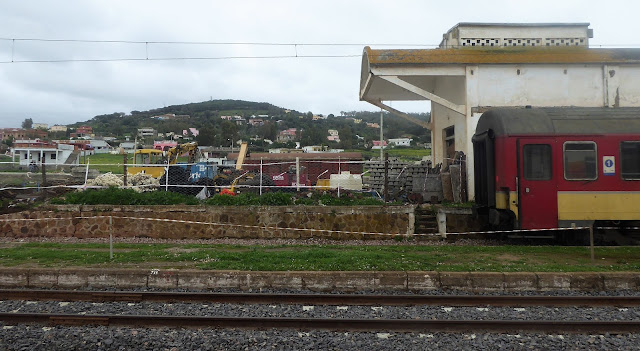 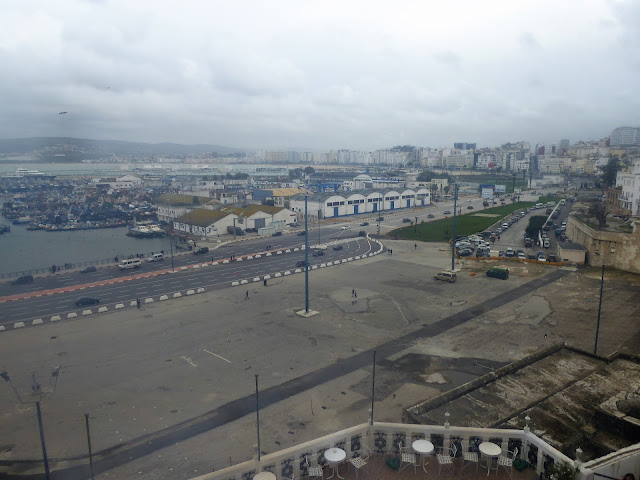 We reached Tangier station and it is being rebuilt as well as the other major stations. Morocco must be spending a fortune on this new train line. The new train sets were parked at a marshaling yard just south of the station. I took a taxi to my hotel which was recommended by Seat61. It is the Hotel Continental and is located across from the ferry terminal. Winston Churchill stayed here since it was 'the' place to stay back in the past. 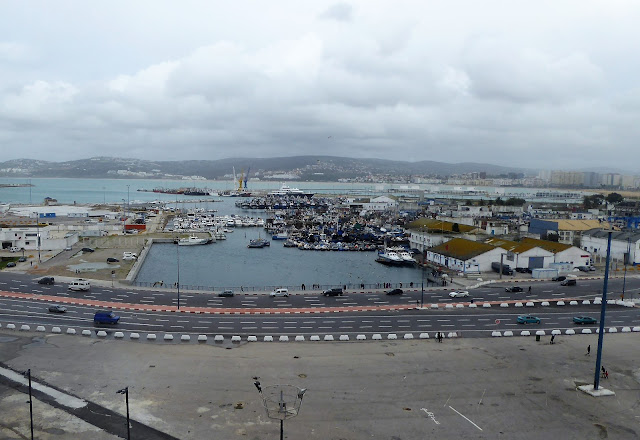 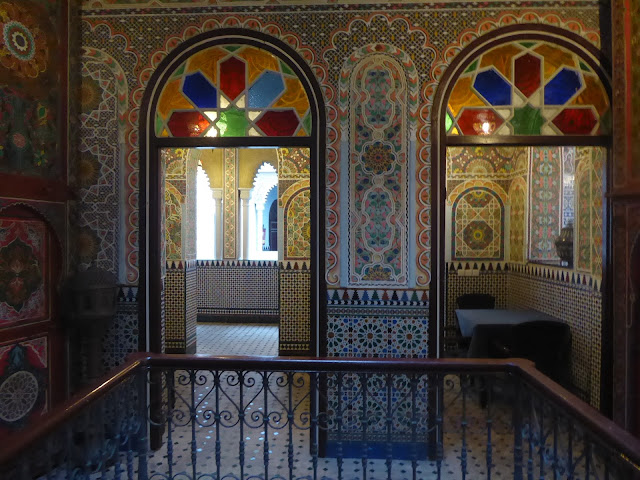 Most of the public area is decorated like this and I may add some more photos later. The bed rooms are adequate and the phrase 'faded glory' applies.

I was planning to spend just one night here before taking the ferry to Spain but the high winds have caused the ferry to be cancelled so I will have to travel the following day. I have rearranged my hotel bookings and I am sure some extra charges will result but as I say to myself when I approach a new city, 'money solves all problems'.