Even though I have been to quite a few places in Spain, somehow I have never seen Madrid. This was my big opportunity. 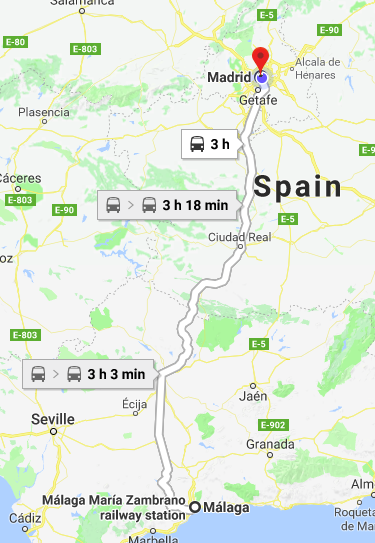 The train travels to Madrid via Cordoba and takes a bit less than three hours. 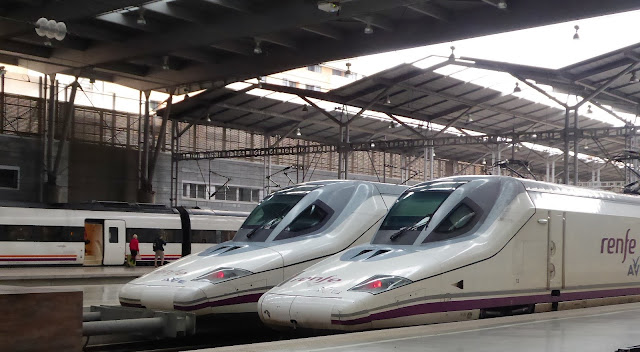 Spain has a modern high speed rail system and I was intrigued by the curious snouts of the engines. 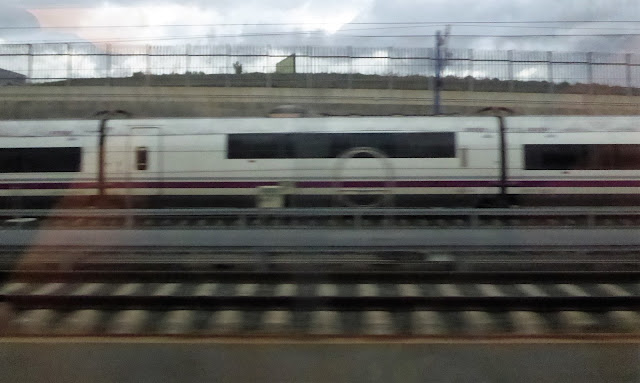 The carriages. These trains go so fast it is difficult to get decent photos. My first class carriage showed the speed and the highest was 290 kph or 180 mph. That is really moving!

The strange duck beak is supposed to reduce noise levels and you can read more about this here. The other curiosity about the train is that it is a Talgo train where the wheel bogies are shared between carriages. 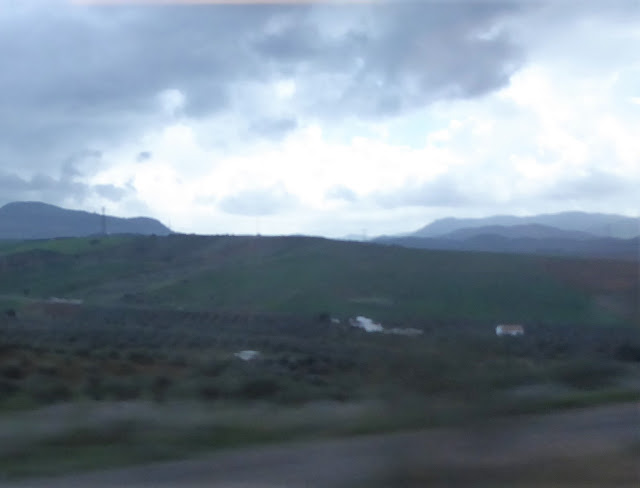 It rained virtually the whole trip so the photos are miserable. 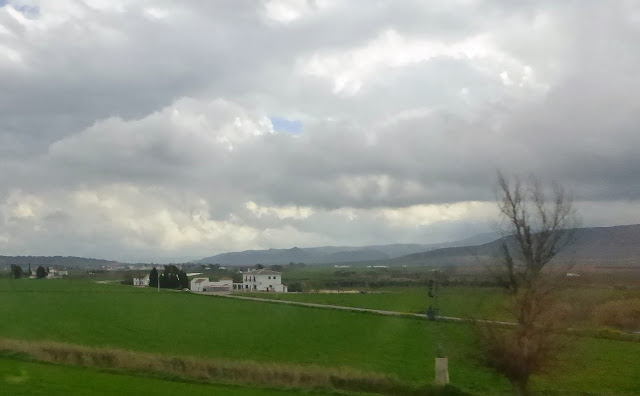 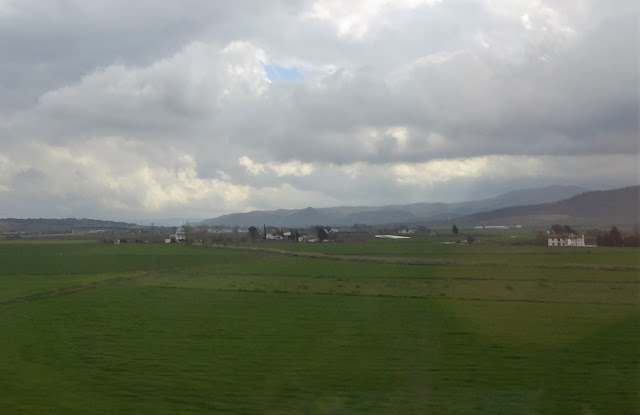 I have been surprised by how green the countryside is in Spain. I seem to remember that it was very brown and dry back when Marianne and I visited Spain in March 1980 but presumably they have had more rain this year. 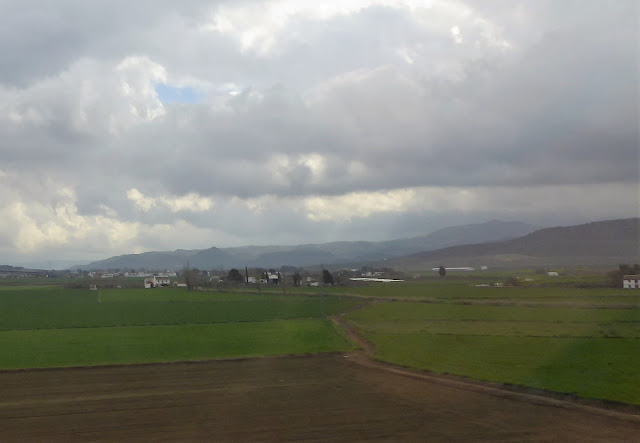 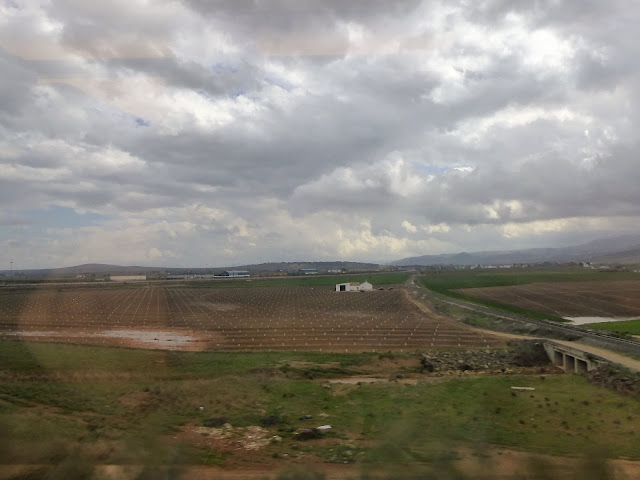 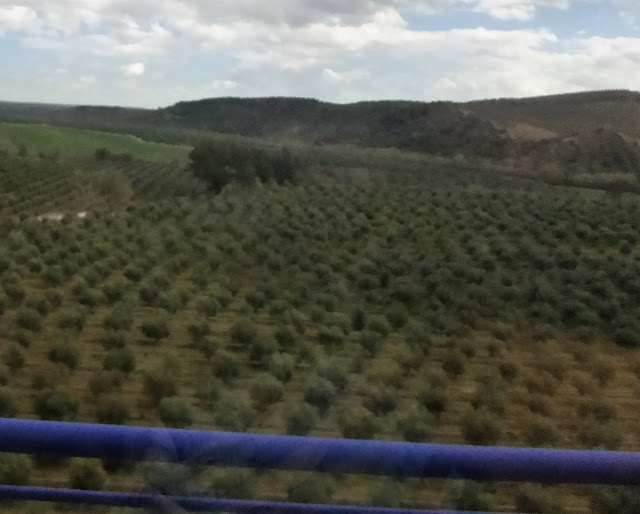 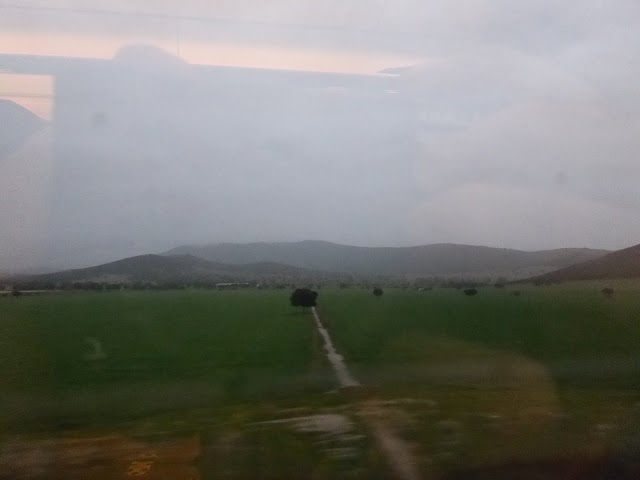 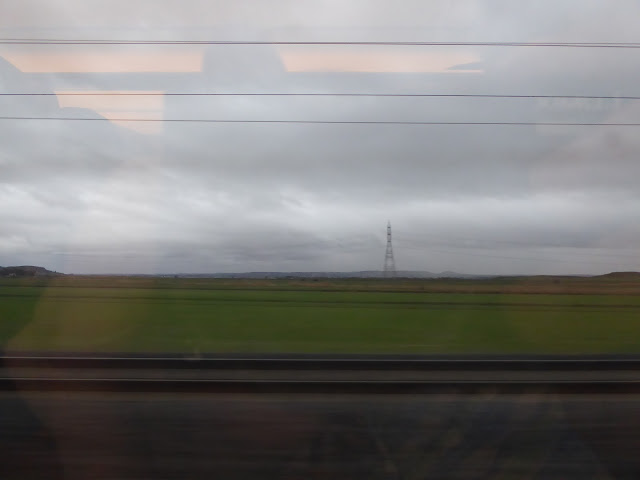 So that is enough miserable photos. You were lucky you didn't get to see the truly awful ones. 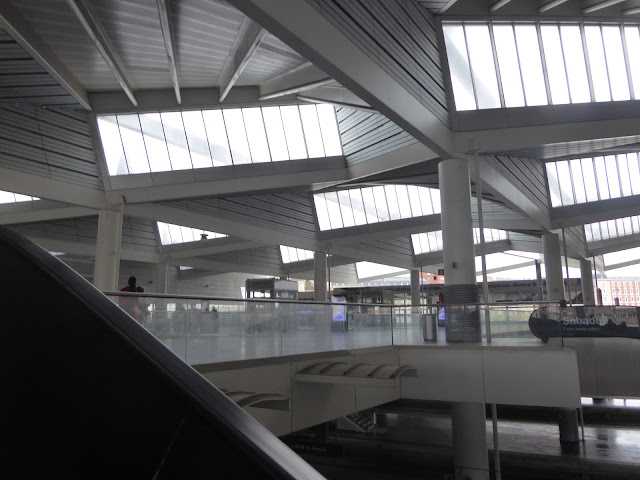 Atocha Station at Madrid is modern but seems somewhat soulless. However the old part of the station has been retained and I will visit it tomorrow. Hopefully the sun will shine. 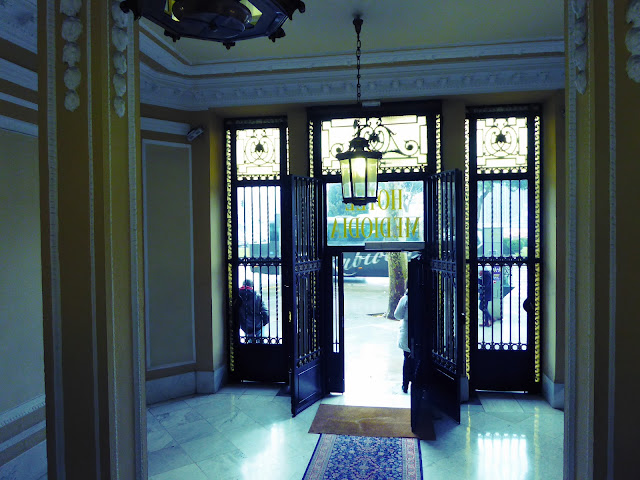 My hotel is across a wide street from the station and has this spiffy entrance. 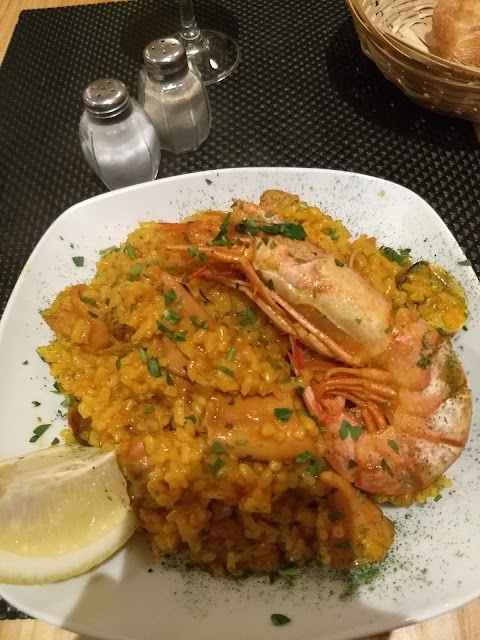 I finally got to have a paella for lunch at a restaurant that I found on Google. It was absolutely delicious and the octopus rings were very tender. 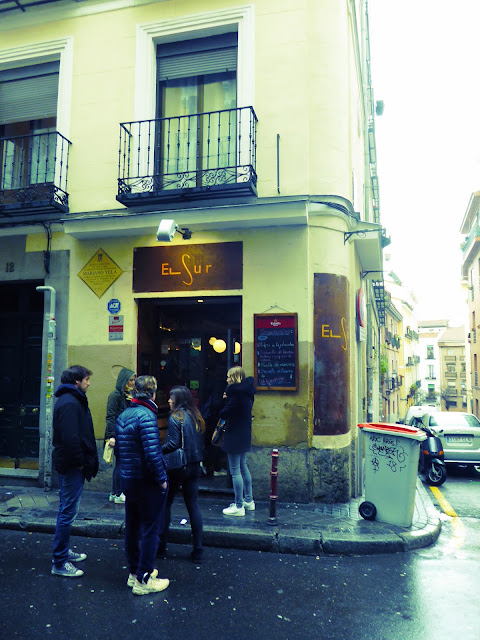 The name of the place is Taberna El Sur and it is about half a mile from Atocha station. The service is friendly and efficient.

This is the place. I was lucky to get a table because a lot of other people have read the reviews as well. 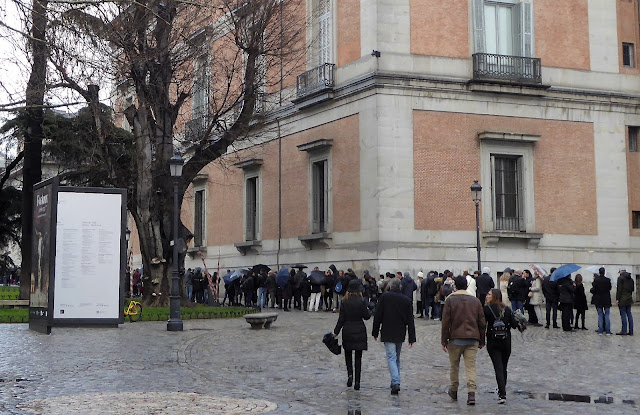 I had a good nap and since it was now 6 pm I decided to brave the wet weather and go to the Prado since entry is free after 6 pm. When I got there I took one look at the length of the line and decided that I was willing to pay to get in tomorrow or Monday during regular hours.

It was the first time I used my umbrella this trip and let me just say that it is a good deal colder in Madrid than Malaga. 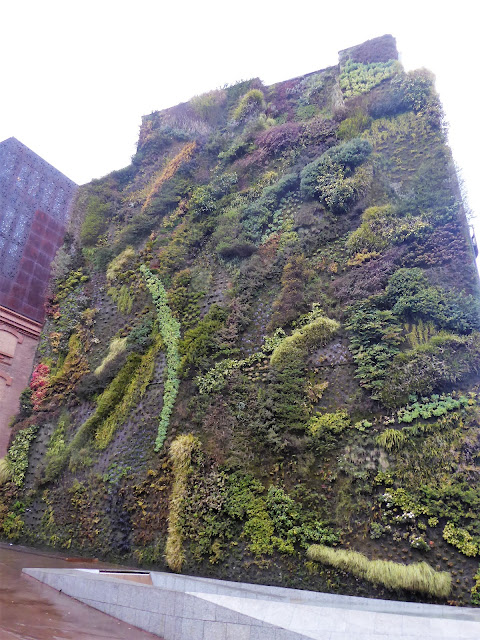 A curious building with vegetation growing on the side. 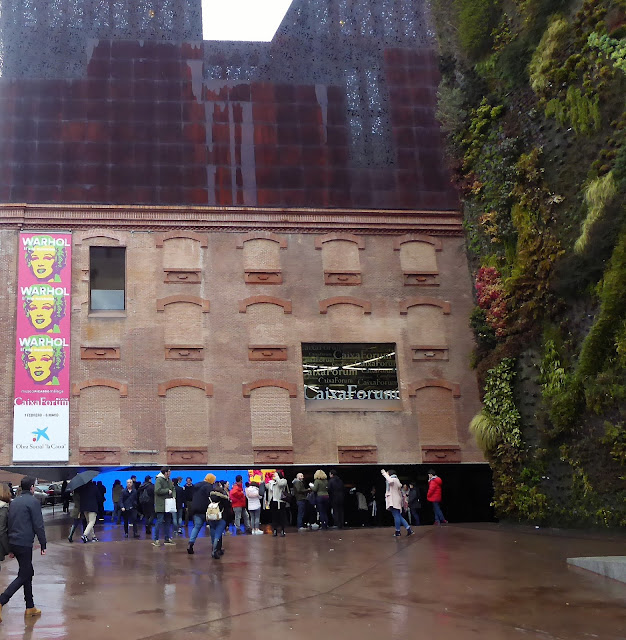 It's right next to the CaixaForum that appeared to have a Andy Warhol exhibition. 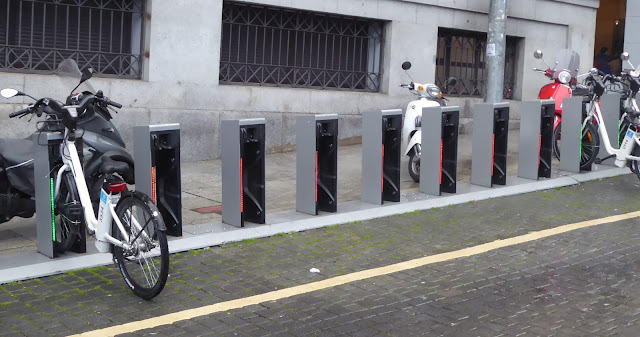 Bicycles for hire but I was puzzled by the green and red lights on the black poles which indicate whether the bicycle is available or not. Surely the presence of the bicycle denotes that it would be available.

Spain today is much changed from when we were there in 1980. It is modern, clean and a pleasure to visit. The train system is particularly good and the hotels are fine. The food and wine are as good as ever.