The Dutch don't appear to have a very distinctive evening dinner cuisine so Gouda was full of restaurants featuring food from other countries. We passed by a Greek restaurant and while we were looking at the menu, the owner who was sitting out side enjoying the cool air invited us inside. 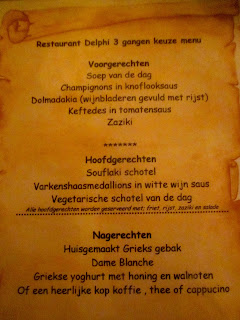 The restaurant was pushing a three course dinner for about 15 euro and here is the menu.

Now take a look at it and decide what you would order before going on with the rest of the blog.

We worked out there were mushrooms and dolmades, souvlaki and medallions of something in a white wine sauce. We were puzzled by the first entry in the list of second course and I suggested it was a pigs trotter. We therefore asked the waitress (who spoke a little English) what animal this hoof thing came from. She immediately burst into laughter since the word Hoofdgerechten means 'Main Course'.

Now you understand the title of the blog. 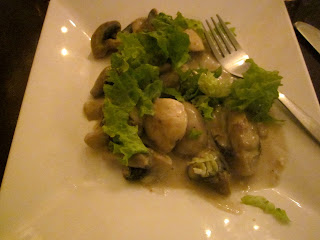 So here are the mushrooms in a cream sauce. Not very Greek but very tasty I can assure you. 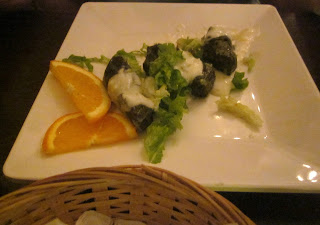 The photos for the souvlaki and the pork medallions didn't turn out but the food was good. However it was nothing like going to a traditional Greek restaurant such as South Street Souvlaki in Philly. 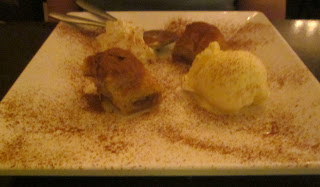 The baked desert turned out to be a form of baklava. 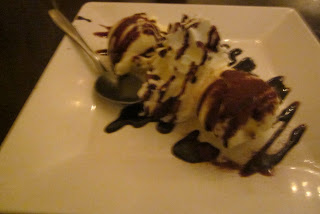 The Dame Blanche was ice-cream and cream drizzled with chocolate and cinnamon. 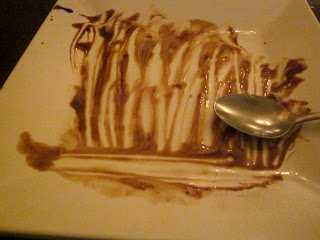 It wasn't very good, was it. I didn't lick the plate.