Meiningen - return to the Elisabethanburg Palace

On our earlier visit to Meiningen, we had walked into the courtyard of the local Palace but we didn't go in. Since we have plenty of time (5 weeks) for the house exchange we finally got around to going there and checking it out. 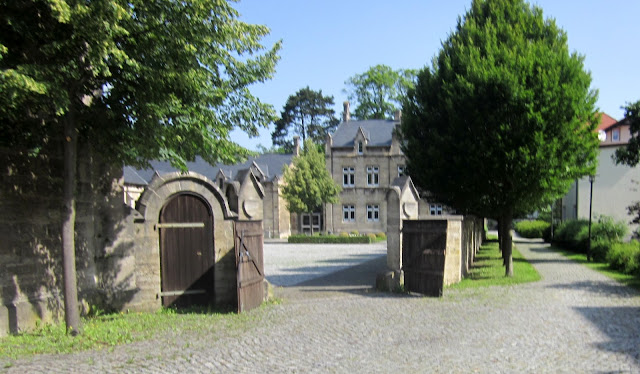 We parked in one of the back areas of the town close to the Palace and walked down a back alley.

I don't know what this is but it looks like it had something to do with education. 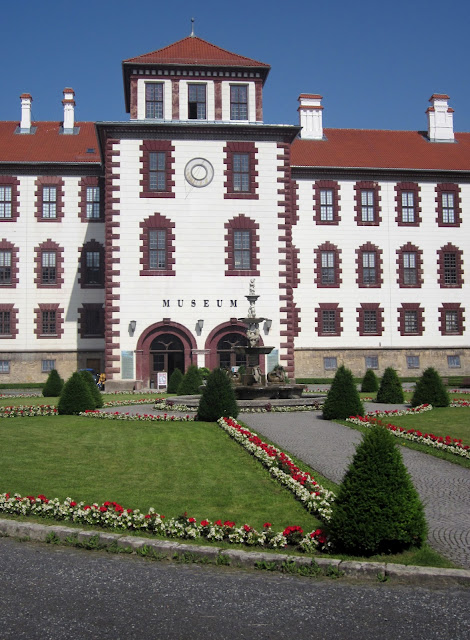 So here we are back at the Palace. 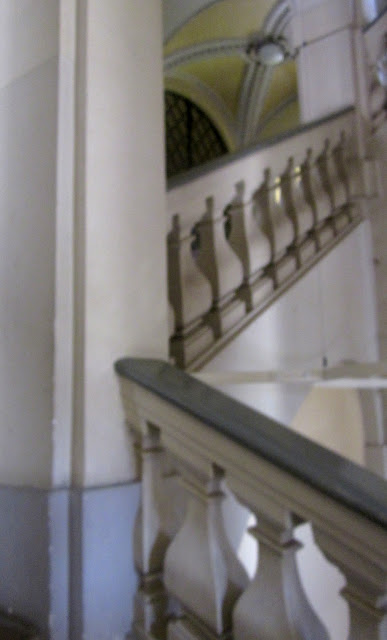 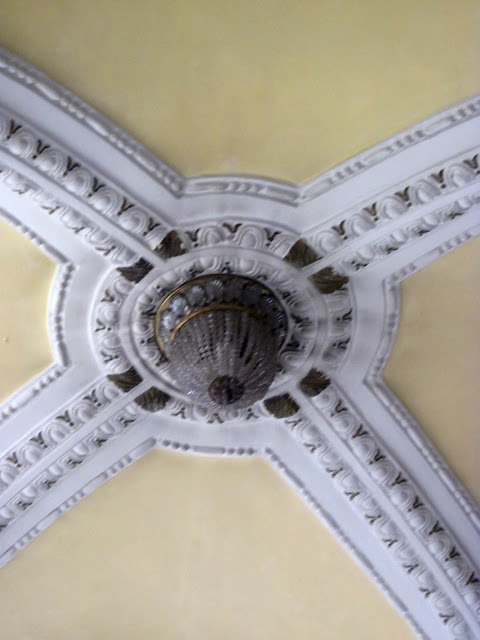 We made out way up the grand staircase to the entrance to the museum. Unfortunately photography is not allowed and they have cameras in each room watching you to make sure you don't do anything. We were the only visitors at the time.

The only thing I can do is point you to a couple of websites that you might find interesting.

Information on Queen Adelaide after whom the city of Adelaide was named. Yes, she came from this town and it is also worth looking at her wiki article. One of the back corner rooms is devoted to her memory and it is probably the most pleasant room in the palace. Some of her portraits that you see in the various articles are in the room.

The other person is George II who is one of the most important people in staging opera and plays in all time. More about him later in the blog.

Marianne found a website with lots of pictures taken in the Museum. 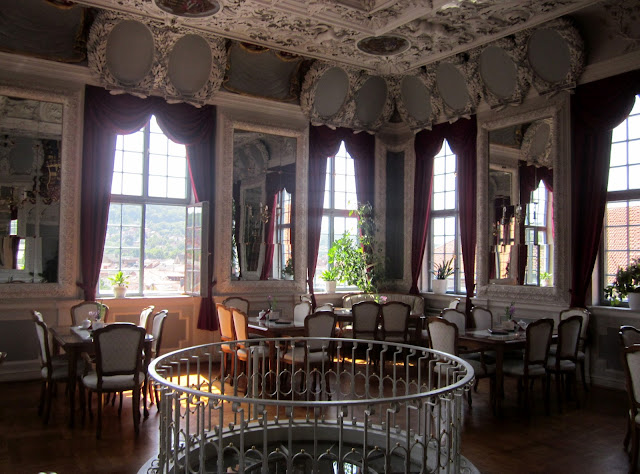 After we left the museum, we continued up the stairs and found this delightful cafe in the top of the building. 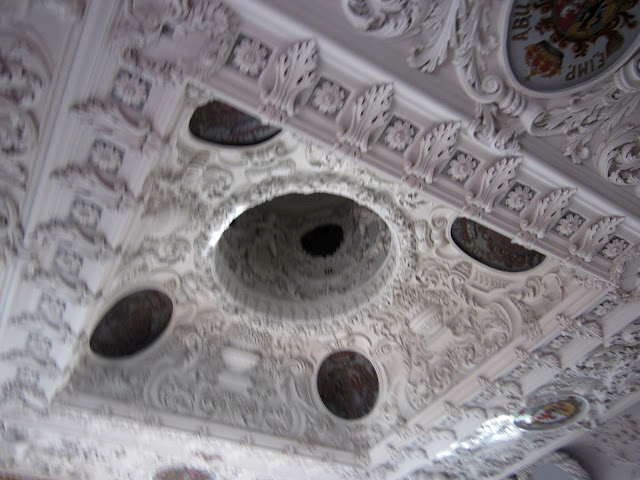 It looked like it should be serving customers and we were ready to have a cup of coffee, but nobody came to serve us. We toddled off after waiting about 10 minutes. 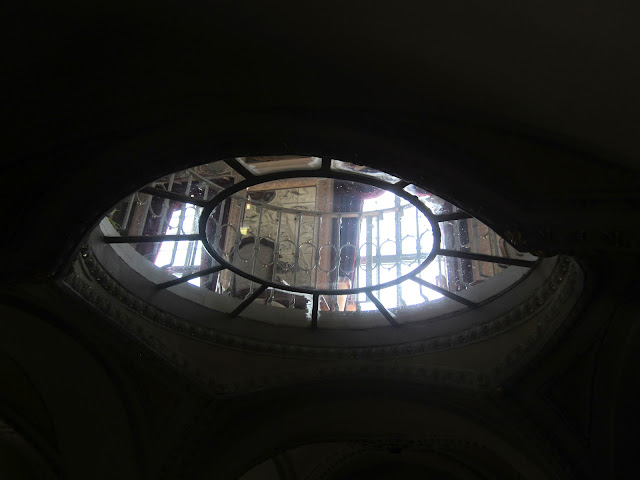 Looking up into the cafe. A cool looking park beside the Palace. German trees provide a lot of deep shade. 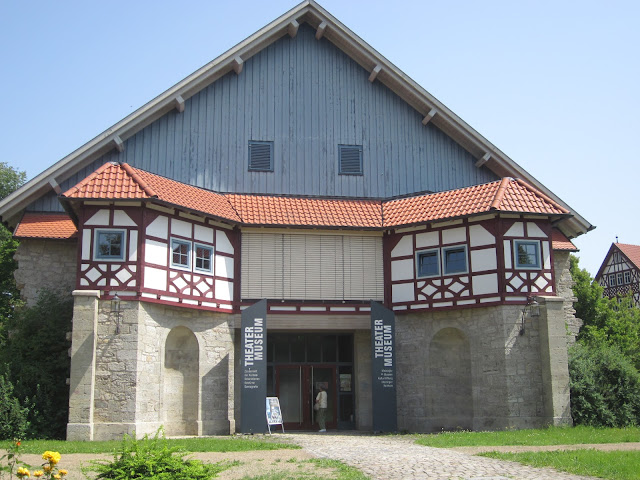 We had bought a combo ticket for the Palace Museum and also this Theatre Museum. It was due to open at noon but the woman who eventually answered the door said we needed to come back at 1pm for the English tour. 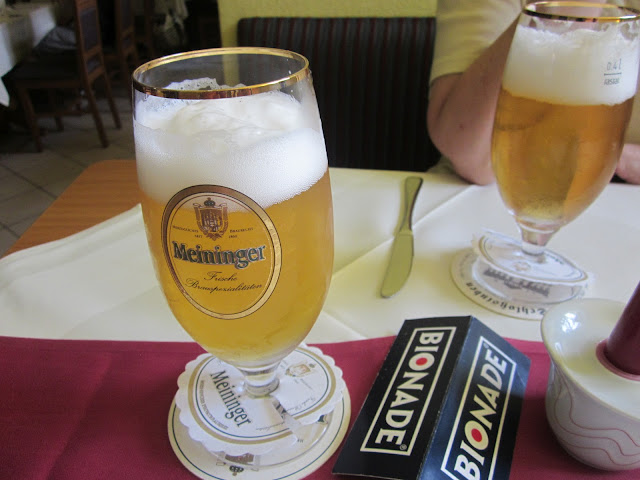 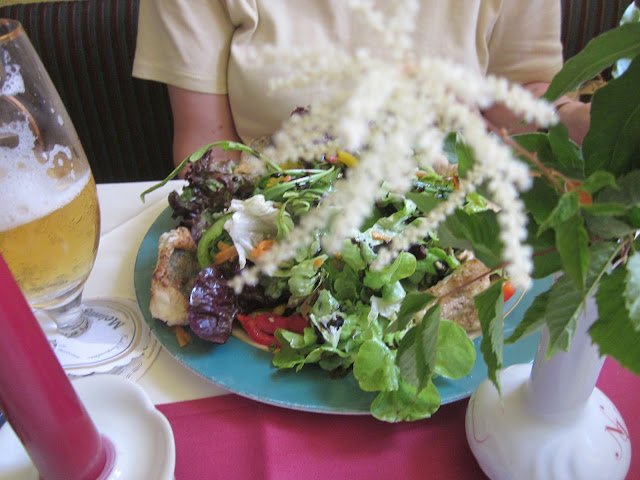 So we adjourned to a nearby restaurant in one of the wings of the Palace. It was over 80 degrees so we felt it was too hot to go back to the cafe at the top of the Palace. We each had a welcome beer and Marianne ordered a fish salad. Out came a huge mound of greenery with some very tasty fish attached. Marianne has not been asking for salad since, so I presume it did the trick.

I had a bowl of icecream. It goes well on top of beer on a hot day. 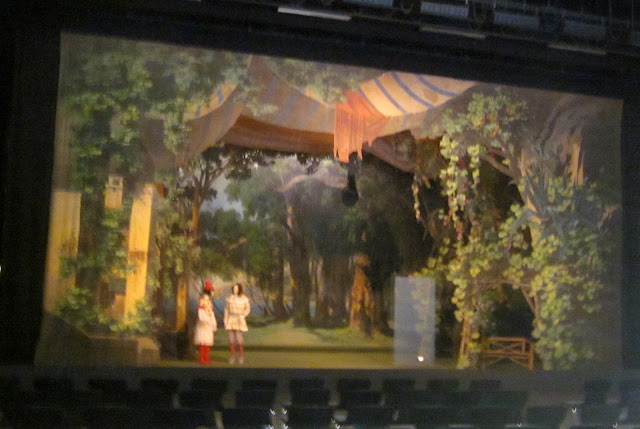 We returned to the Theatre Museum, not knowing what to expect. The woman who let us in knew a little English and she invited us to sit down in front of a stage set up as you see it in the above photo. 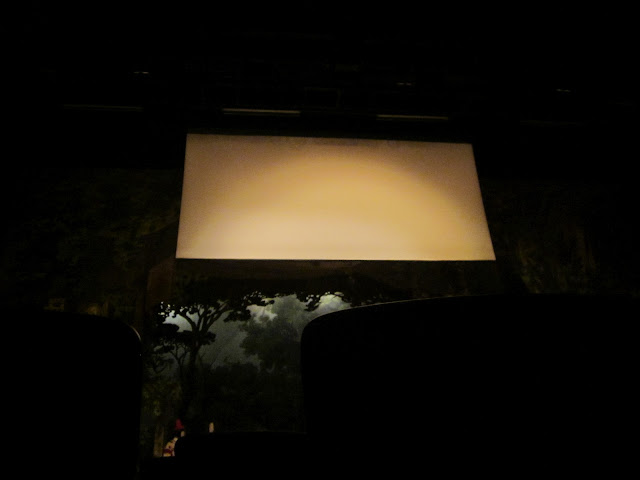 The lights then went out, a screen descended and a film was shown with an English commentary about the history of the Meininger Troup who performed in the Meiningen Court Theatre. The troup was funded and directed by George II who introduced many of the modern methods of staging plays and operas. It is worth reading the wiki article about his influence. The layered effect you see in the stage setting above is one of his innovations. Stanislavsky was influenced by him.

By the way, the set came from 1868 and was essentially fabric on fish net.

So it was all very interesting, but unfortunately, not too many photos. Or fortunately if you are following the blogs and getting sick of the photos.

I leave you with a video. While we were waiting to see if anybody would answer the door to the Theater Museum, I noticed a rather portly woman dancing to music in a tent set up for some music festival just outside the Palace. You can see her right in the middle of the screen. She was having fun.