Munich and the Hofbrauhaus

For our final day on our German Rail Pass, we decided to do a day trip to Munich (Munchen). The last time I had been there and gone outside of the train station was 1974 so I was curious to see what I thought of the place after all these years.

But first a little about the German Rail Pass. We purchased a six travel day version for $480 for both of us. There is a savings for couples who travel together. We had to get the pass validated (blue stamp on the right) before we could use the pass. Because our local station did not have an attendant, we went to Schweinfurt which had a large station with an employee who could wield her mighty stamp. I discovered later that the conductor on our local trains could also validate the tickets.

There was space on the ticket for us to write in the day and month of travel. The first conductor of the day would then overprint what I had written with a date stamp. You were then good for the day. Other conductors would look at the ticket, check the date, mutter something and then hand the ticket back. 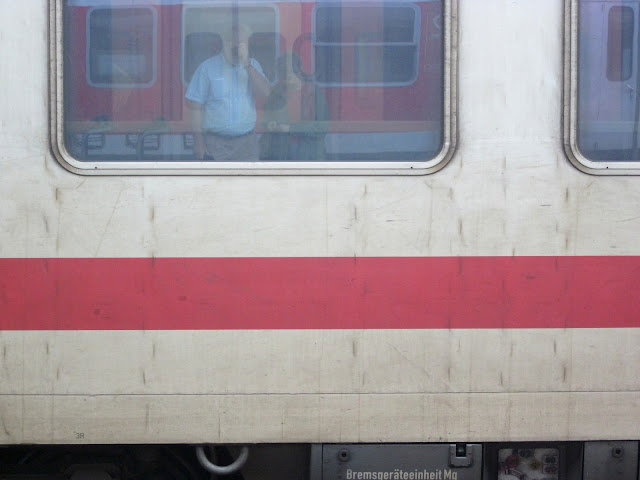 The trains were not as clean as we expected them to be. The outside of this carriage was quite grubby. In general, the local and regional trains were cleaner than the ICE and IC long distance trains. The trains were generally well patronized, particularly in the afternoons. Getting a pair of seats together could sometimes be a problem. 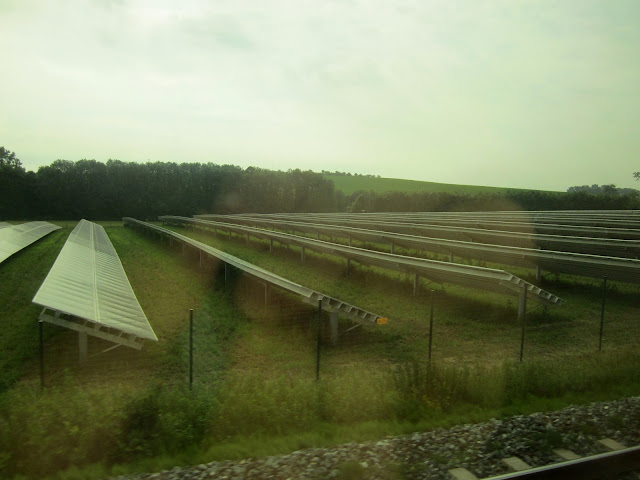 The number of solar panels being installed in Germany is incredible. In addition to roofs, solar panels seem to grow very well by train tracks. Some of the fields had to be a mile long or more. Germany is serious about generating power from alternate sources. The wiki article says that at noon on May 26, 2012 solar power provided over 40% of Germany's electricity requirements. 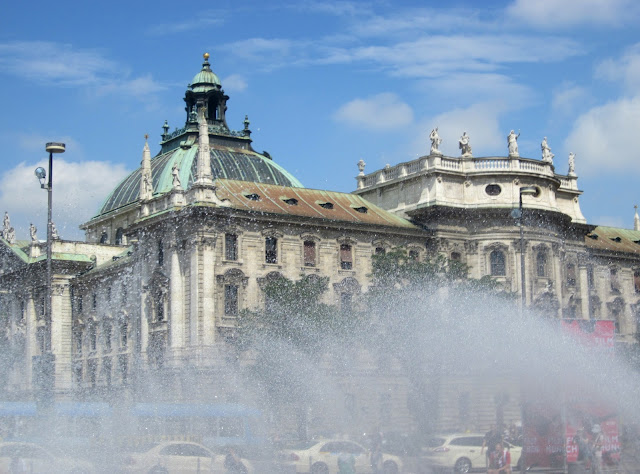 We reached Munich where instead of the showery day that was promised, the sun came out and it was hot and humid. As far as I can tell, predicting the weather in Germany has not been perfected. The fountains were attracting a bunch of people enjoying the spray. 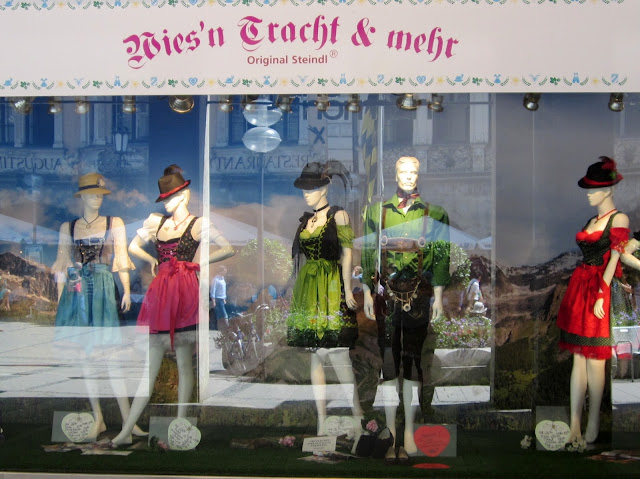 At one stage of my life, I might have looked good in the green outfit on the right. 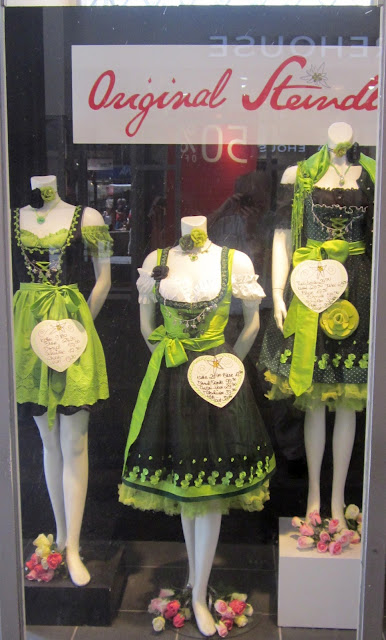 I doubt that I ever would have looked good in these. 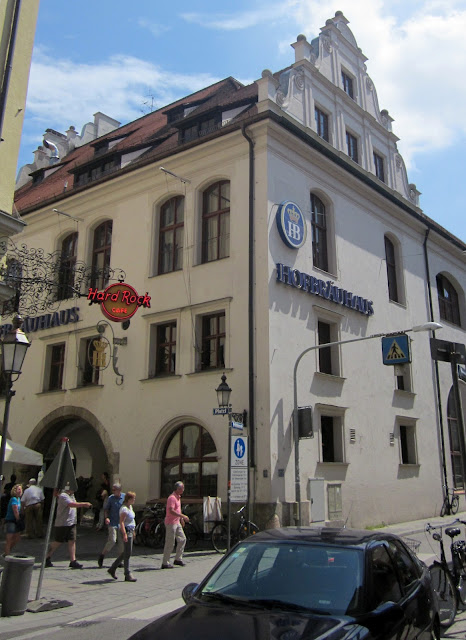 I suspect you are all sick of photos of German buildings and churches, so instead we give you the Hofbrauhaus. 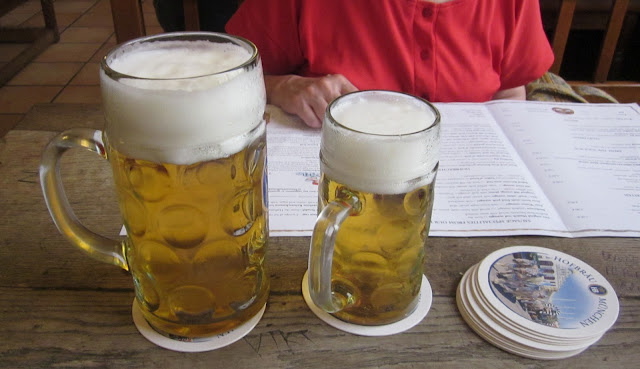 On the left, one of the famous liters along with a half liter mug. 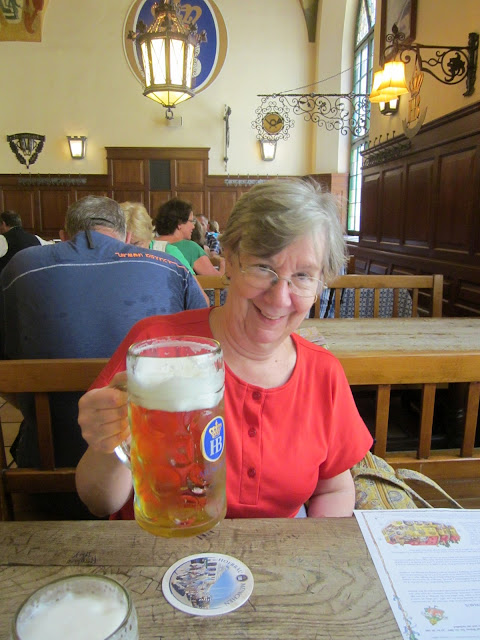 I could tell that Marianne was really enjoying this place. I had been there one night back in 1974 with a group from the local youth hostel and we drank numerous liters and had a great time. Marianne had never been there so here was her big chance and she took it. 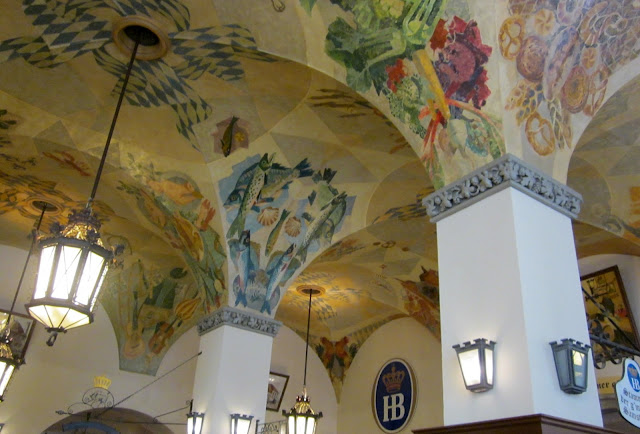 My memories of 1974 are understandably dim. What I remember was that the place was jam packed and incredibly noisy. Old German codgers tended to sit down next to the young ladies in our group who edged away from them to us younger blokes. 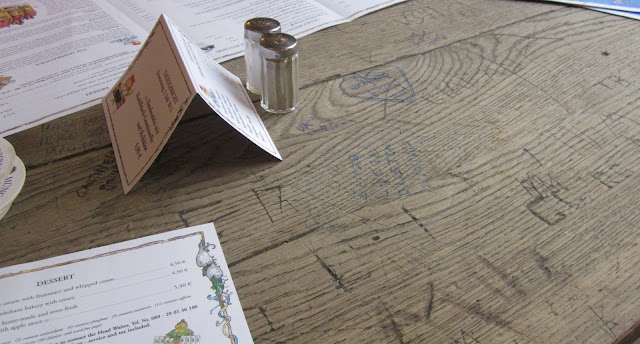 People are still carving their initials etc into the table tops but I suspect they plane them down every year. 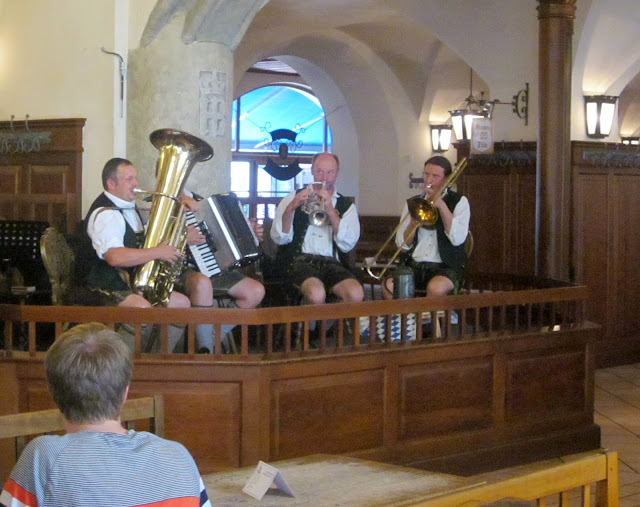 And of course there was an oompah band. 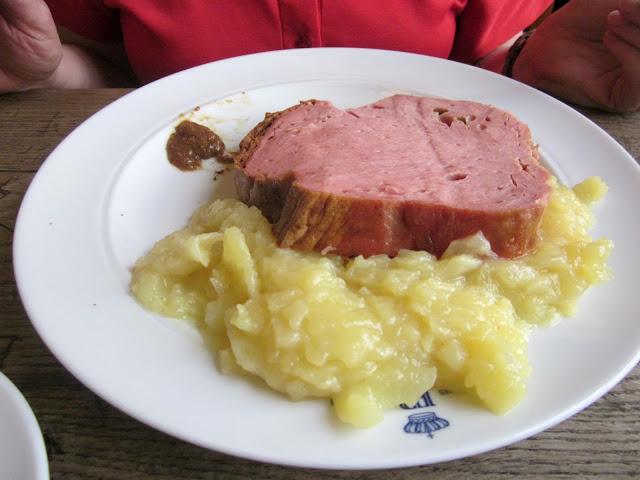 Marianne ordered the Bavarian meatloaf with potato salad. It turned out to be a slab of Leberkase which I quite like. It tasted a bit too salty to me but Marianne enjoyed it. 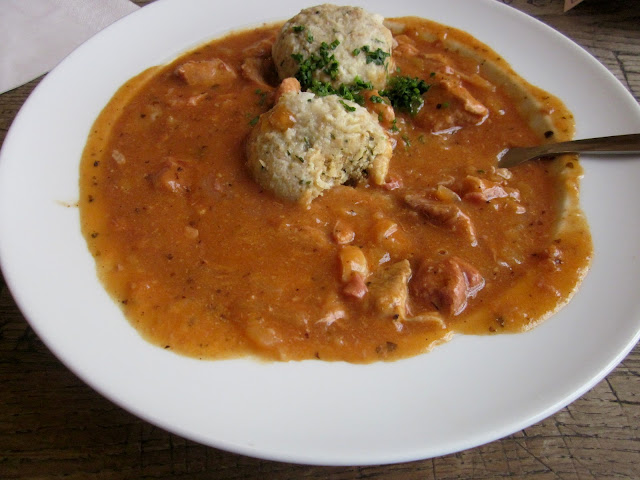 I had a veal stew with bread dumplings. It was pretty good. Each dish cost less than 10 euros. 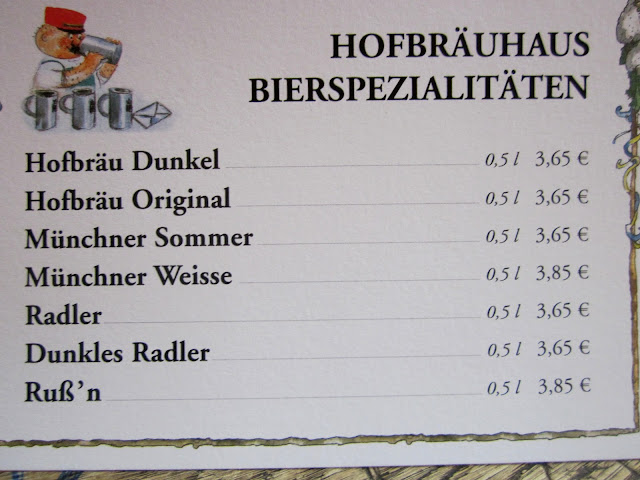 Prices for a half liter. A full liter is a little less than double. The beer tasted much better than the version we were served in Dresden. 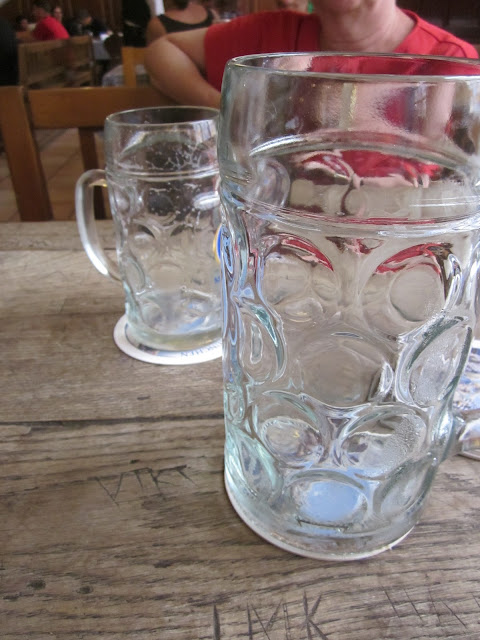 We duly finished the glasses of beer. A liter full of beer is quite heavy and I found I needed both hands to support the glass. 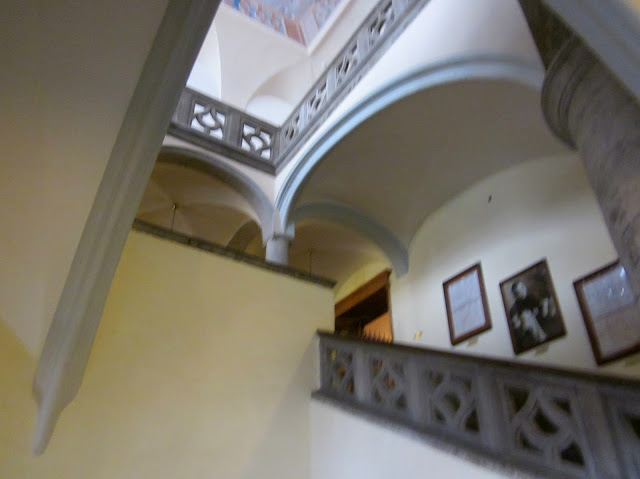 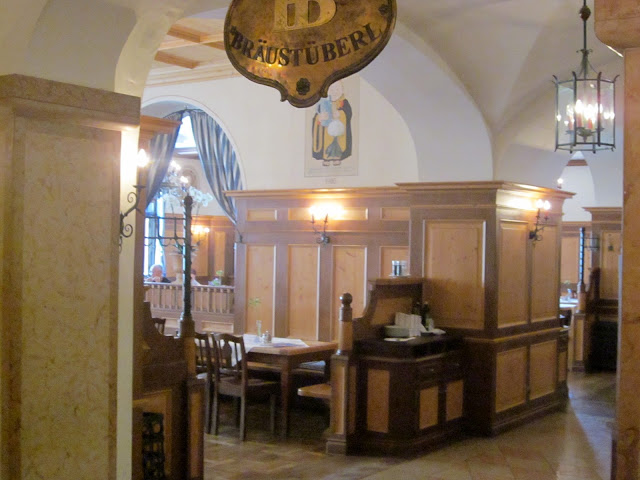 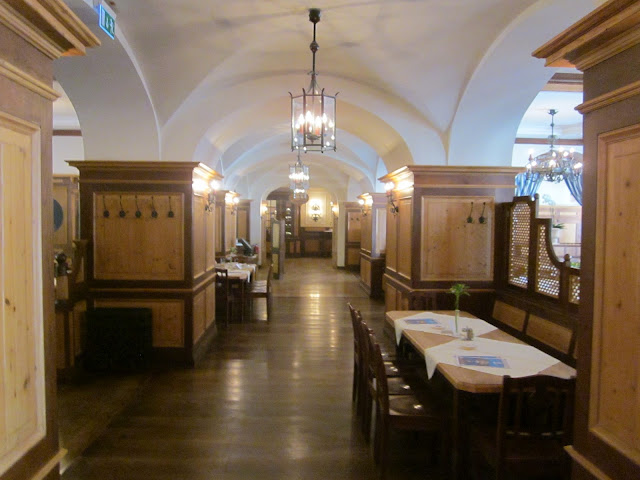 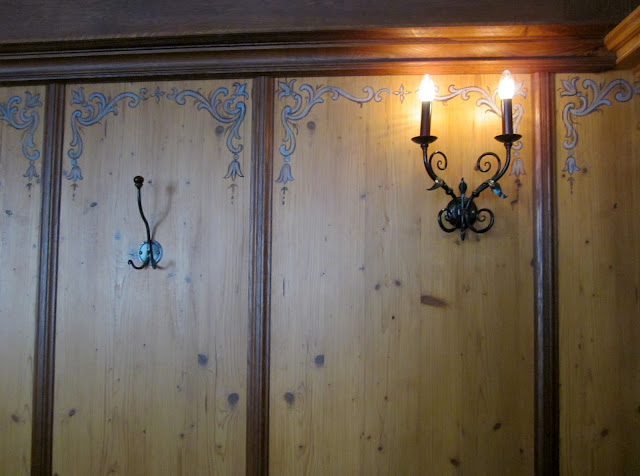 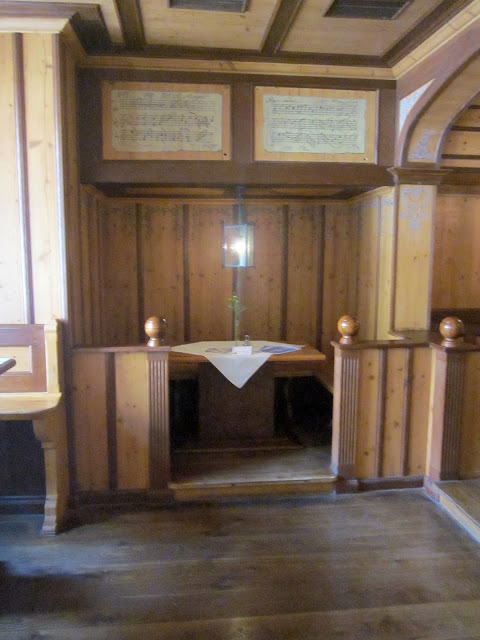 The next floor up is more formal and you wouldn't burst into song up here. Prices seem to be the same as those on the ground floor. 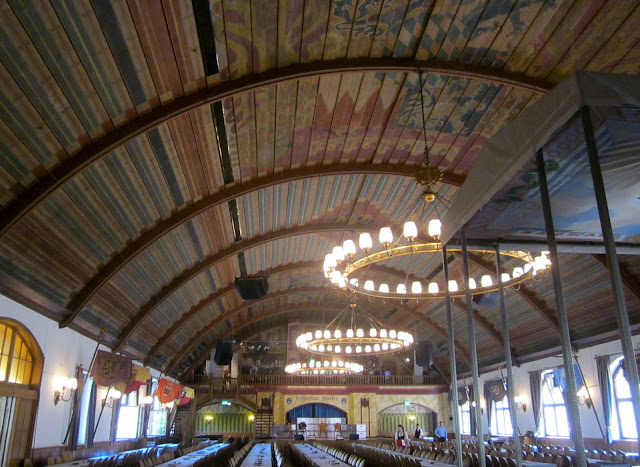 Going up another flight of stairs we came to the Festival Room. This was the room where Hitler and the National Socialists held their first meeting in 1920. On the other hand, both Mozart and Lenin were apparently frequent visitors to the Hofbrauhaus so there is quite a range of patrons here. 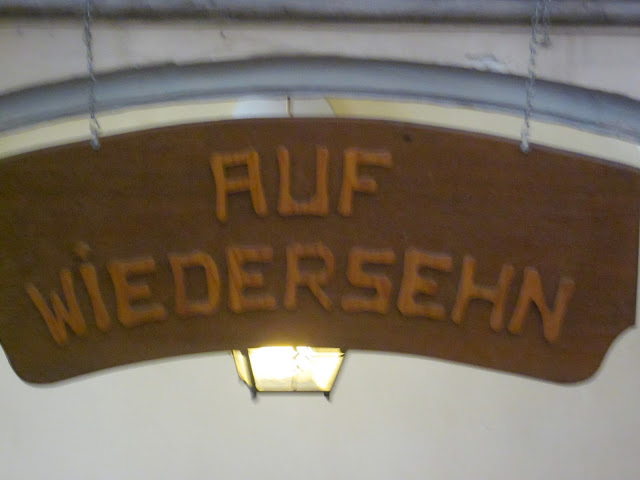 So farewell to the Hofbrauhaus. From her reaction, I think this visit was one of the things that Marianne enjoyed the most on the whole trip so far. Perhaps it was all the beer. 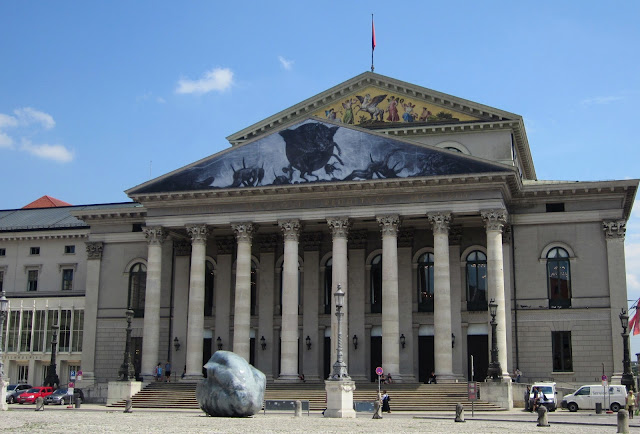 Back in 1974, I heard Richard Strauss's 'Der Rosenkavalier' here at the National Music Theatre. Instead of being a normal tourist and concentrating on the regular tourist sights, I used my Eurail train passes to go from concert to concert. It was wonderful. 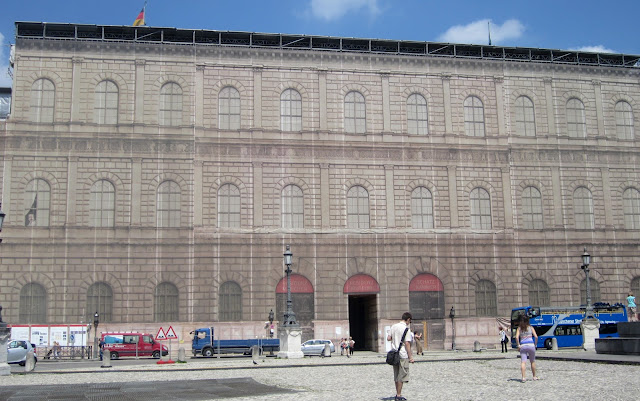 Since there is so much restoration going on in Europe, many of the buildings such as this building, the Munich Residence, are disfigured by scaffolding. To give tourists a better idea of what the buildings really look like, cloth facades with a huge picture of the building are hung in front and hide the scaffolding. It's quite effective.

If we had more time, we would have done the tour of this building. 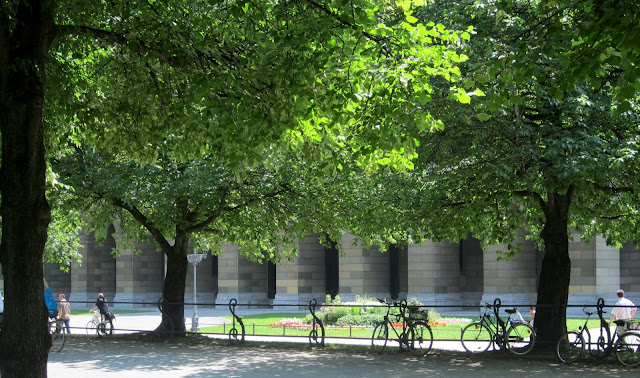 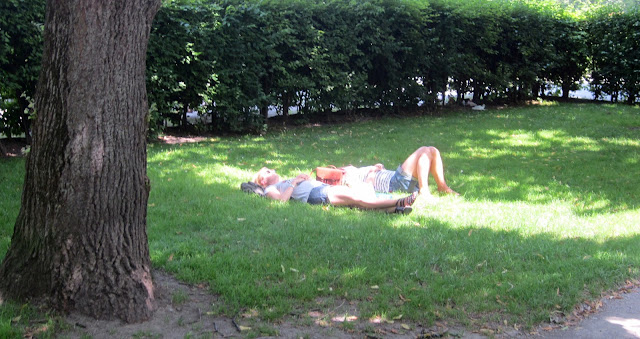 We briefly entered the Hofgarten. It was the hottest day we had experienced in Germany so far and people were wandering around in shorts and just enjoying the summer sun. 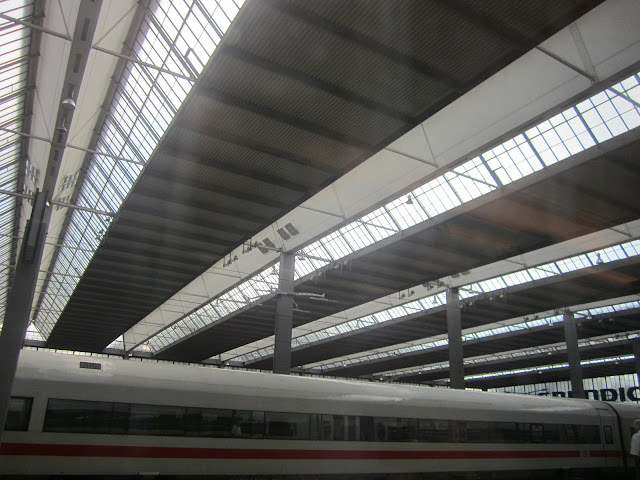 Back at the Hauptbahnhof waiting for our train to leave. We managed to board our ICE train early but by the time it left, it was full. 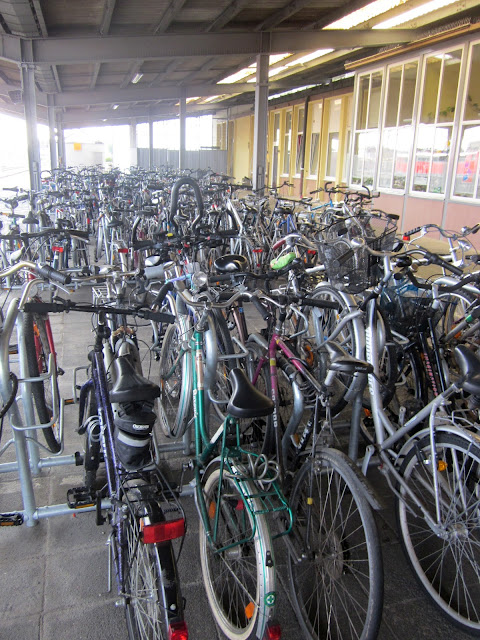 Bicycles are everywhere in German cities. These are all at the Schweinfurt Hauptbahnhof for the people who commute down to Wurzburg by train.