When we walk to the nearby tower, I can just see the tops of several buildings above the wheat fields. These buildings were used by the Mechanized Infantry Battalion 352 which was based in Mellrichstadt until 2006.

A couple of links about the battalion are here and here.

One afternoon when Marianne did not feel like going for the walk, I decided to check it out. 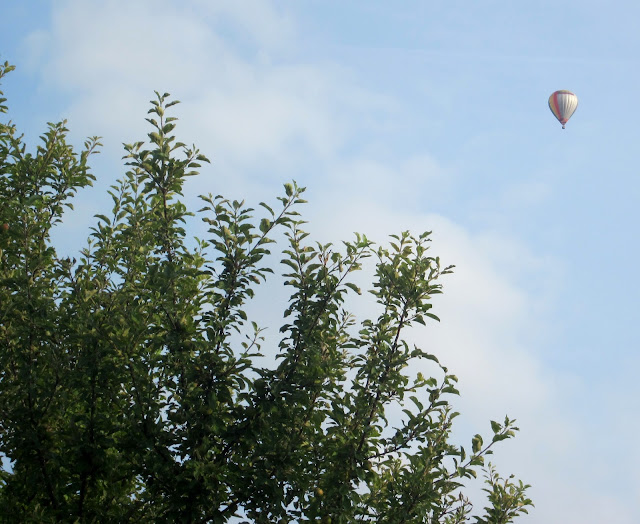 It was a gorgeous evening and a hot air balloon floated past. It was at a pretty high altitude. 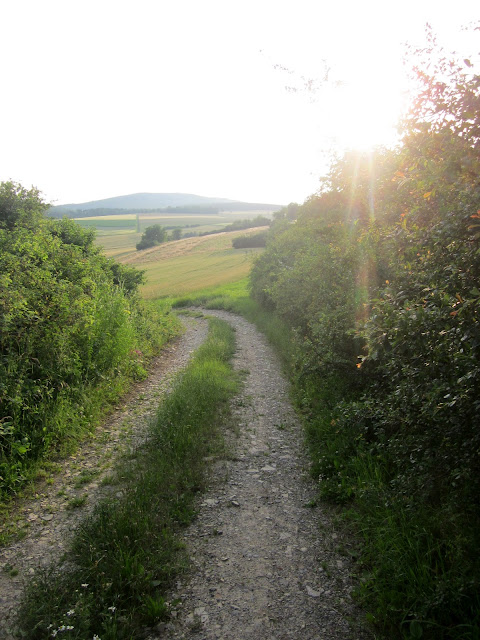 There are a number of walks that you can take around Mellrichstadt and this is one of them. The Germans are very keen hikers. 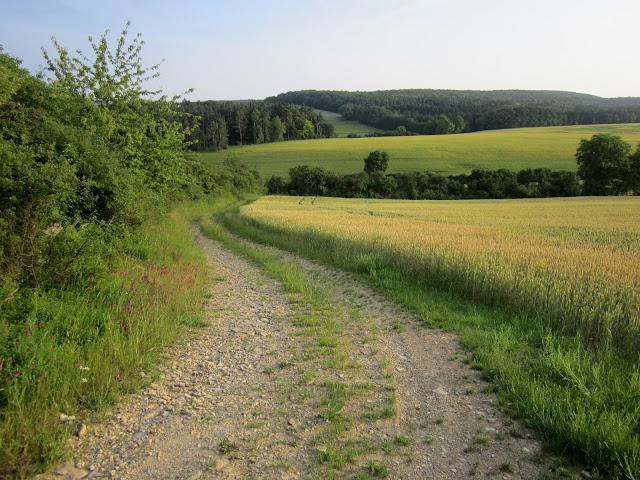 We continue to be impressed by how beautiful Germany is. It's not dramatic, but very pleasant. 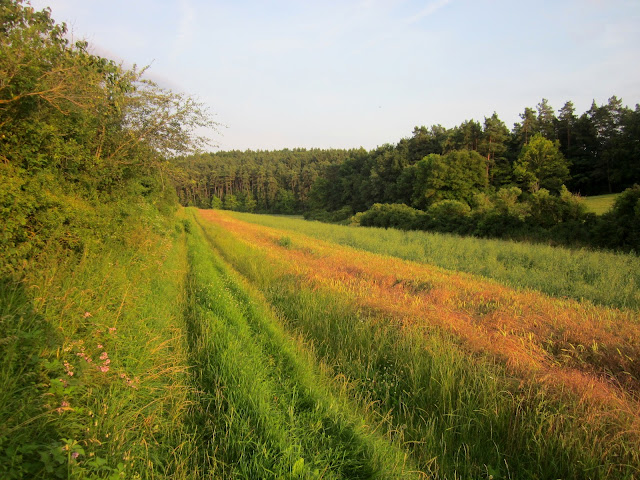 The path was a bit overgrown at one point, but not impossible. 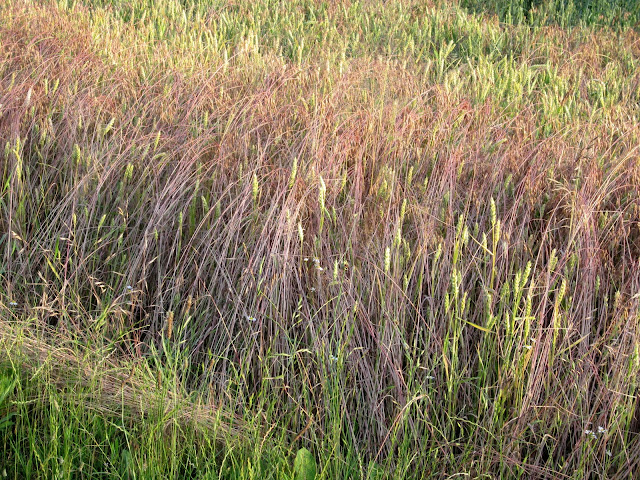 Some of the crop had turned a pinkish colour. 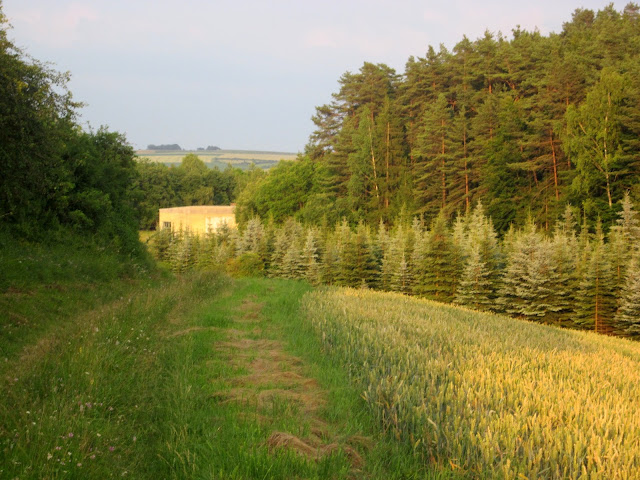 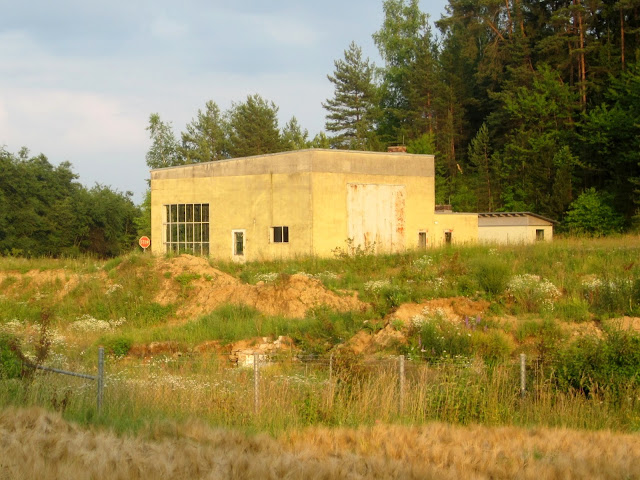 Finally I reached the former base. 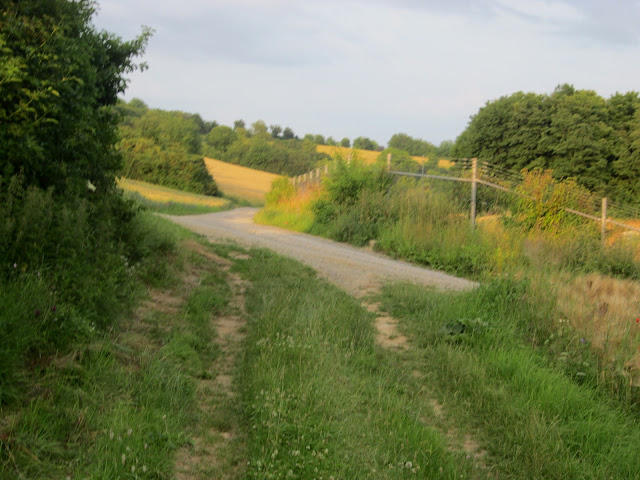 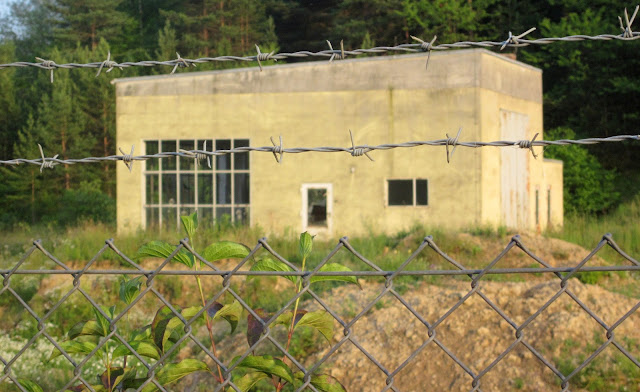 The base was surrounded by a fence topped with barbed wire, but the windows in this building were broken. 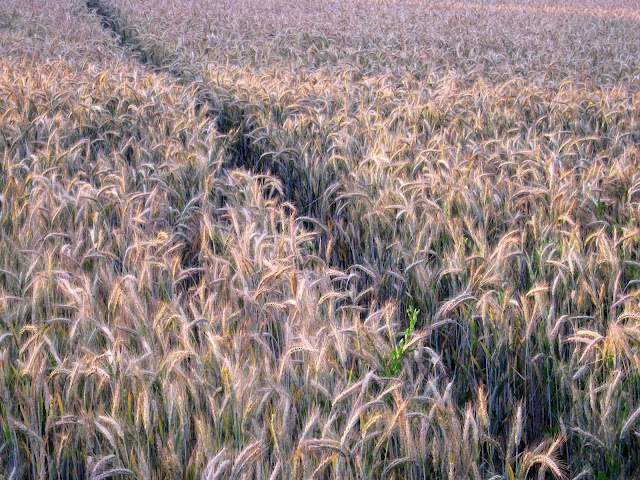 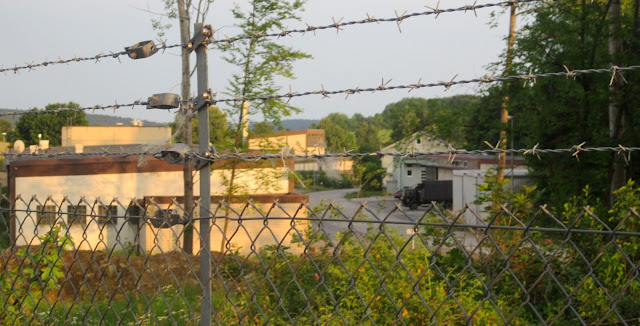 The base appeared to be quite large. 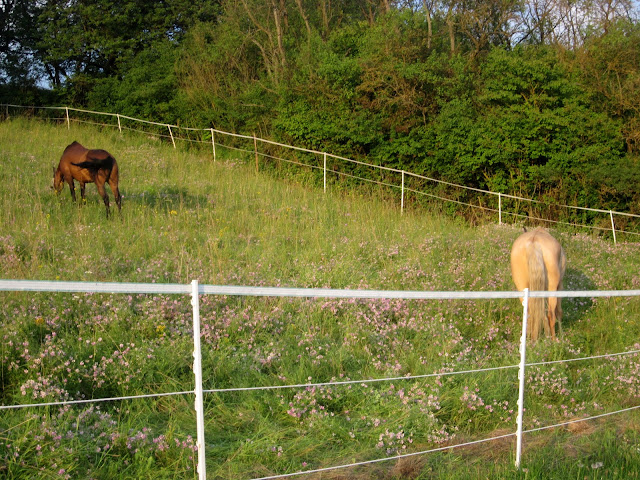 Horses grazing behind an electrified fence on the other side of the path. 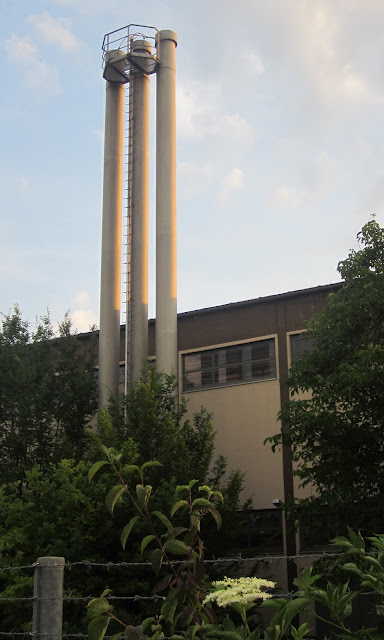 The base even had its own power station. 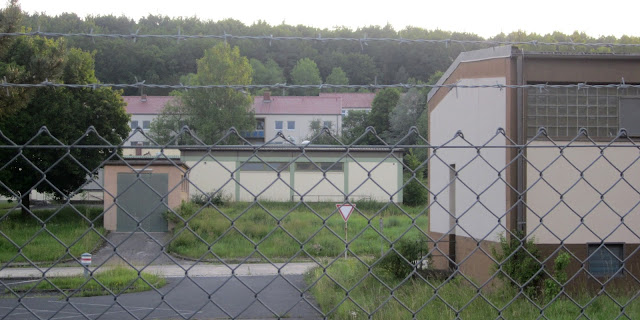 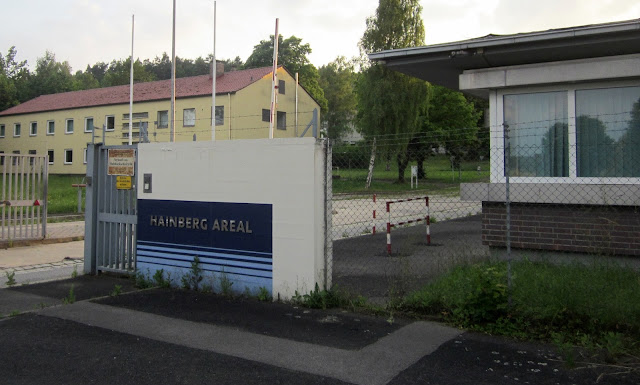 The entrance was open and there appeared to be cars and people inside but I decided not to go in. It was bad enough that I was taking photos of the place. In some countries you could go to jail for that. 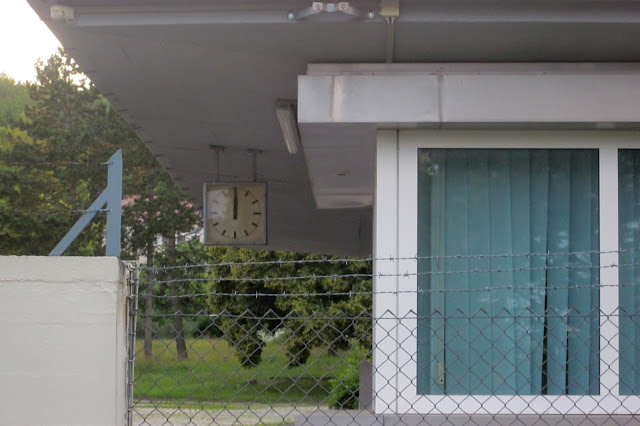 The base closed in 2006 and time stopped still.

One can only imagine what it would have been like to live so close to the former East German border. Invasion could have come at any time and this base would have been a prime target. Presumably its function was to delay the advance of the enemy by a few days, or more likely, hours. If you are interested, the wiki article on the Fulda Gap is worth reading. Part of the defences included small atomic bombs. The US Army planned to use the weapons in Europe in the event of a Soviet invasion. US Army Engineers would use the weapon to irradiate, destroy, and deny key routes of communication through limited terrain such as the Fulda Gap.

Fortunately for this beautiful area, the bombs were never used.

As you would expect, there is now some information on the web written by people who were stationed in the area.
14th Amoured Cavalry

An interesting article on the Soviet Army in Meiningen just across the border in the former East Germany. 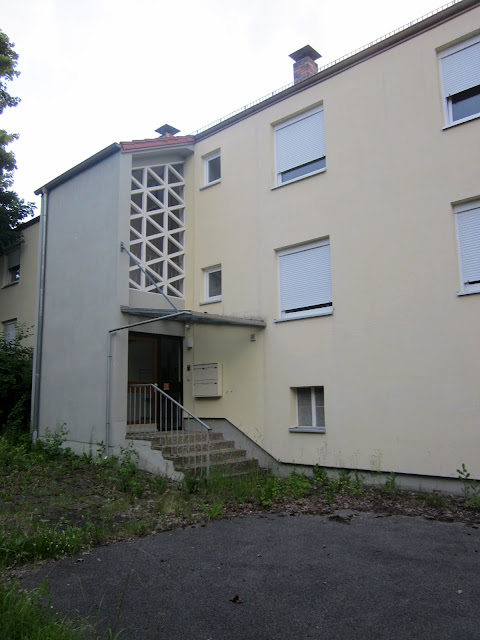 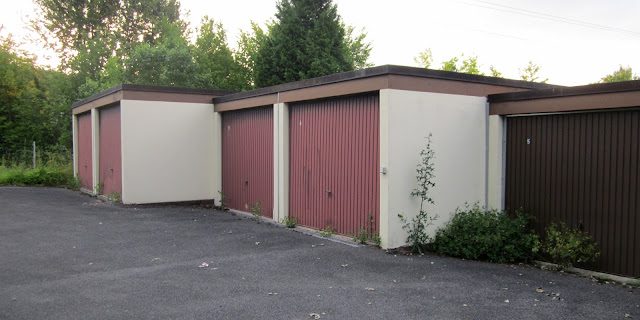 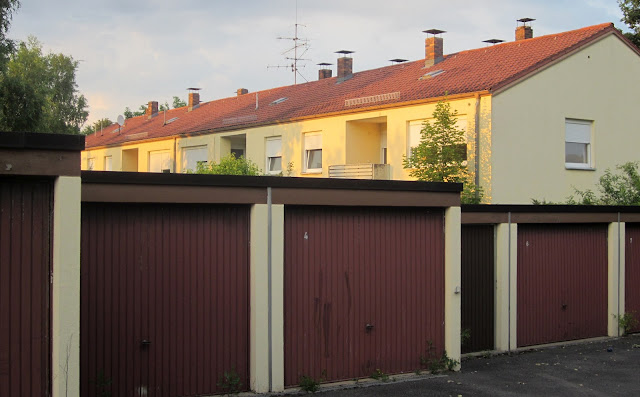 I continued along and found this block of apartments and garages just outside the main gate. At first glance, they looked to be occupied with windows ajar and curtains at different heights and positions but when I looked closer, it was obvious the building was empty and the garages were not used. It was as if the inhabitants had left that morning and never returned. 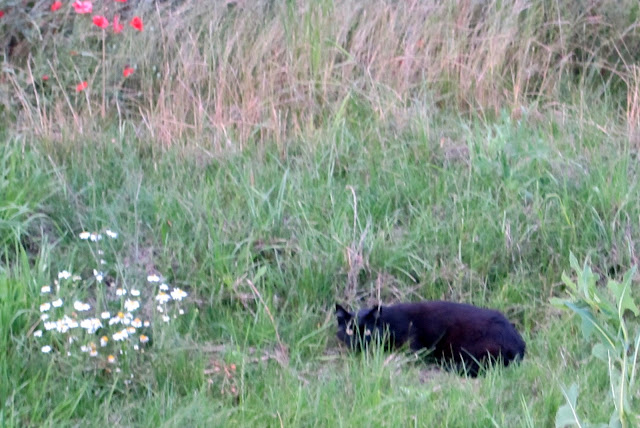 A black cat watched me with great suspicion. 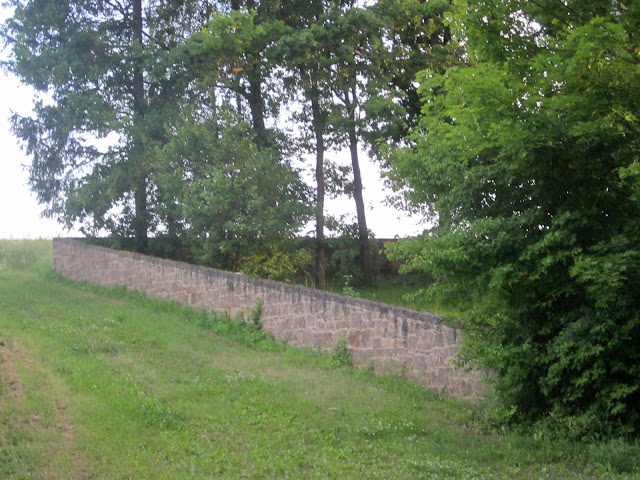 While arranging the house exchange I got on Google Earth to check out the location of Mellrichstadt and to look at photos of the place. One photo showed a Jewish Cemetery just outside the town and right beside the  military base. The cemetery turned out to be just a few yards away from the deserted apartment buildings. 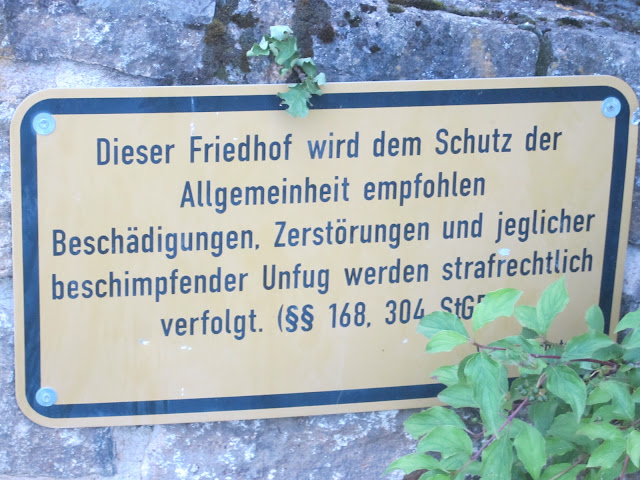 The Google translation of this sign on the cemetery wall reads
This cemetery is the protection of the recommended general damages. Destruction and mischief of any abusive will be prosecuted 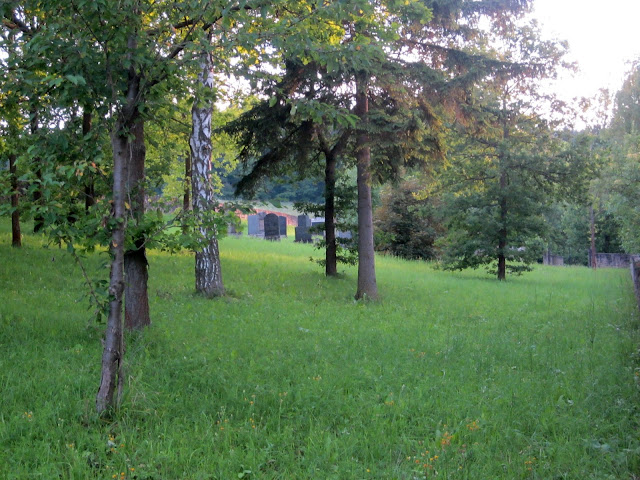 It looks like the Jews of Mellrichstadt built a large cemetery with plenty of room for many graves but unfortunately they never anticipated what would happen. 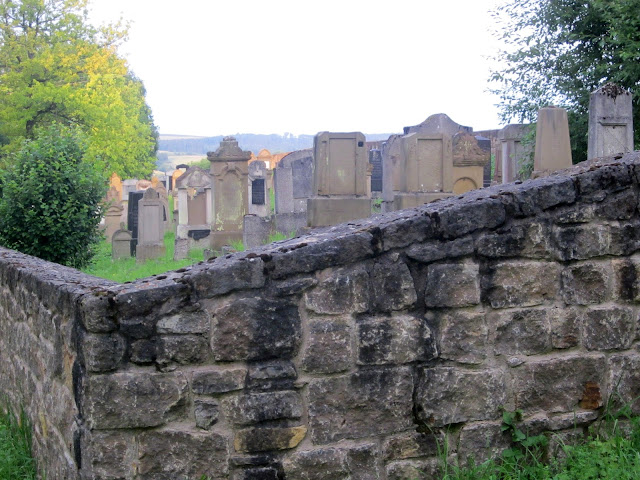 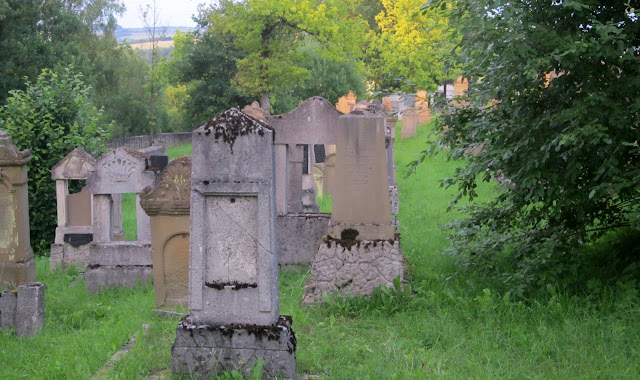 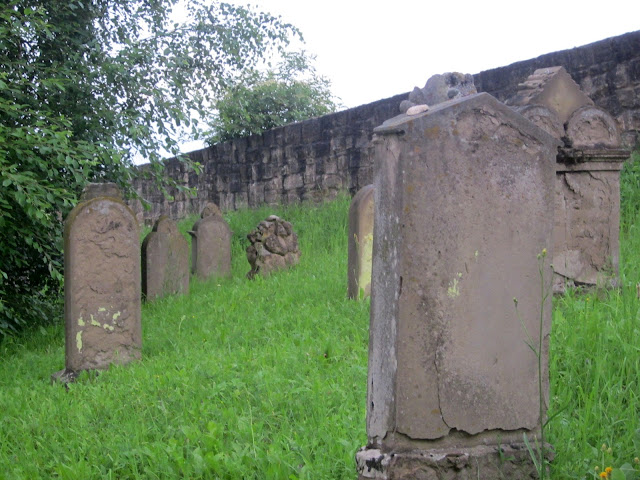 A quick Google of 'Mellrichstadt Jews' reveals quite a few entries including a list of the local victims, most of whom died in concentration camps, particularly Izbica, Poland.

A memorial has been erected at the south entrance to Mellrichstadt. A Jew who grew up in Mellrichstadt but emigrated to Chicago in 1938 when he was 14, organized the statue. The story is here and here. A photo of memorial here since I was not able to find it.

As I left the area and walked back to our exchange family's house, I felt it was ironic that the two symbols of people who disappeared would sit side by side. The empty apartment building and the empty cemetery.