Another stroll around Innsbruck

There are some days that you feel quite lazy and just want to relax and chill. We felt a bit that way on our Saturday in Innsbruck but we girded our loins and headed out anyhow. 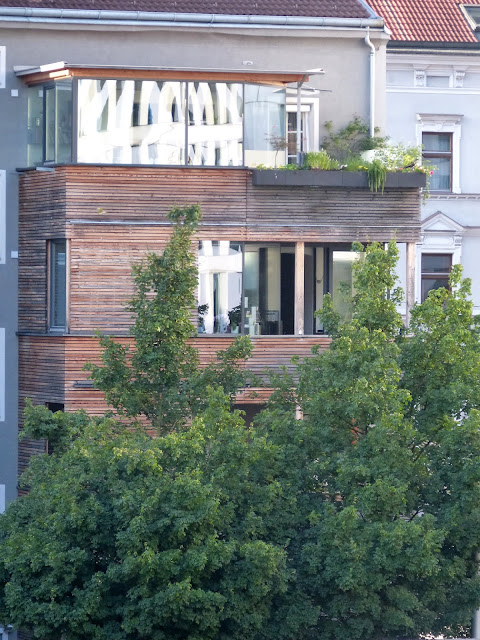 Interesting building we could see from our hotel window. 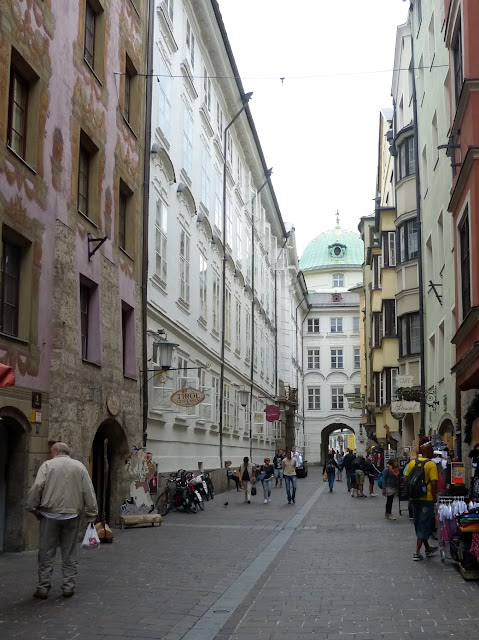 It was an overcast Saturday morning and it looked like Innsbruck had issued instructions to its residents to stay indoors. Many shops were closed and it seemed that only tourists were wandering about. 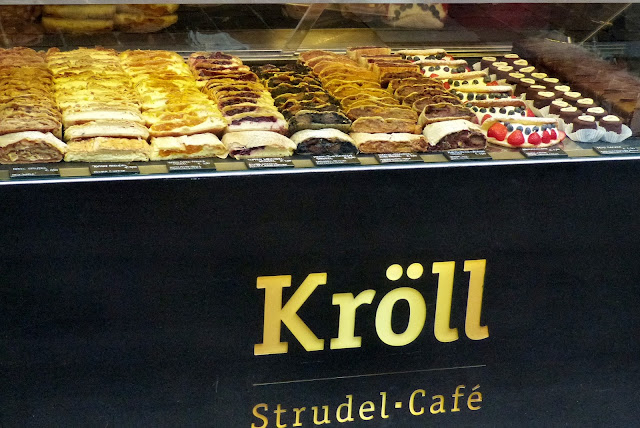 Still, the strudel shop was doing good business. We had each eaten a couple of waffles with cream for breakfast so we did not indulge. 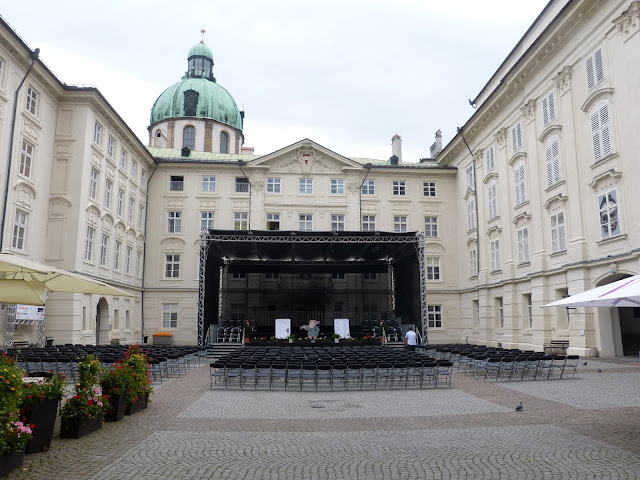 Stage set up in a large courtyard of the Imperial Palace. European cities hold lots of outdoor concerts in summer. 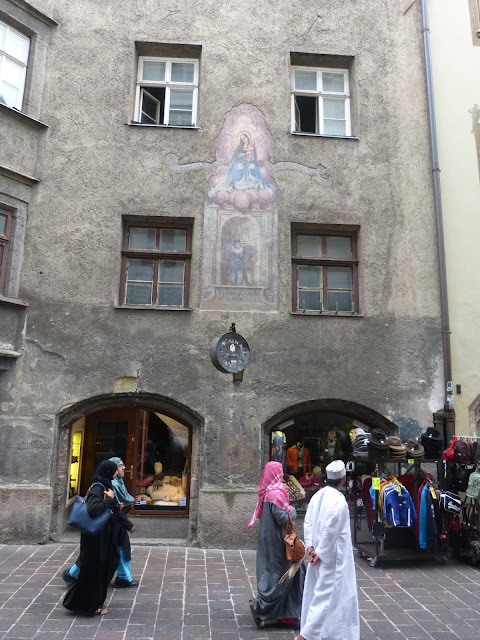 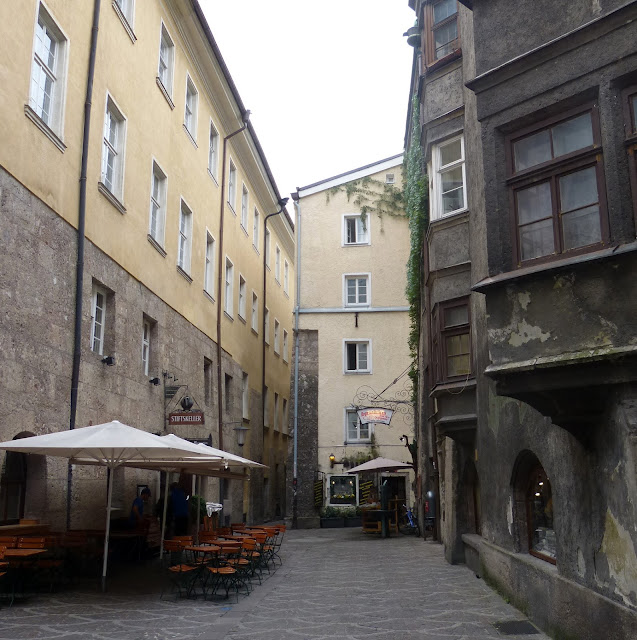 A back alley with outdoor cafe. 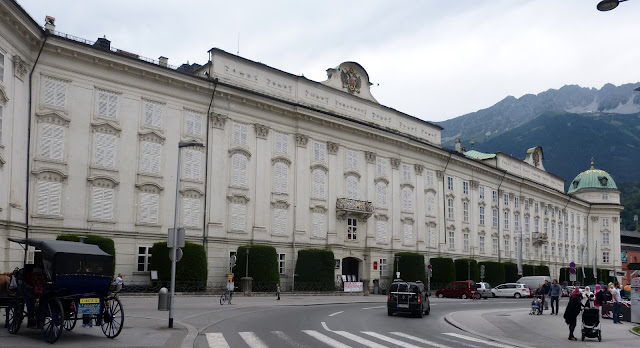 Imperial Palace. We were too lazy to go inside for a tour. Well it's not laziness so much as your brain gets tired from over stimulation and the thought of traipsing through another historical building is not appealing. We had seen enough already in Linz. 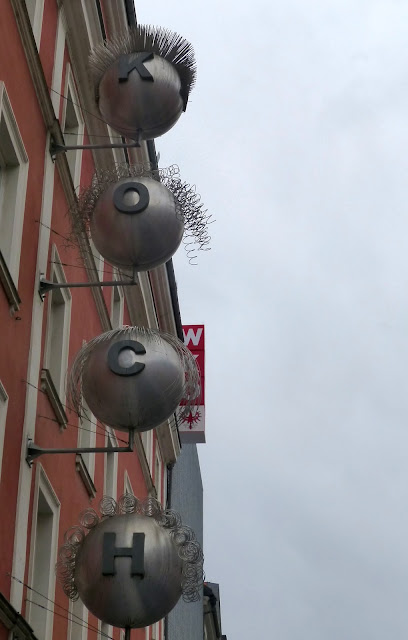 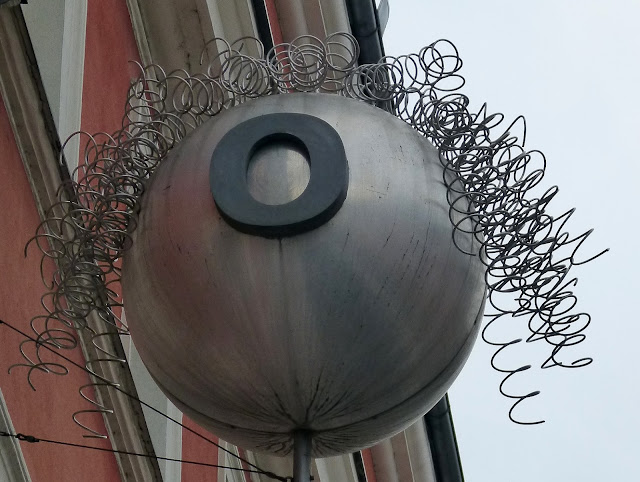 So we continued to wander and came across this interesting sign for a hairdresser. 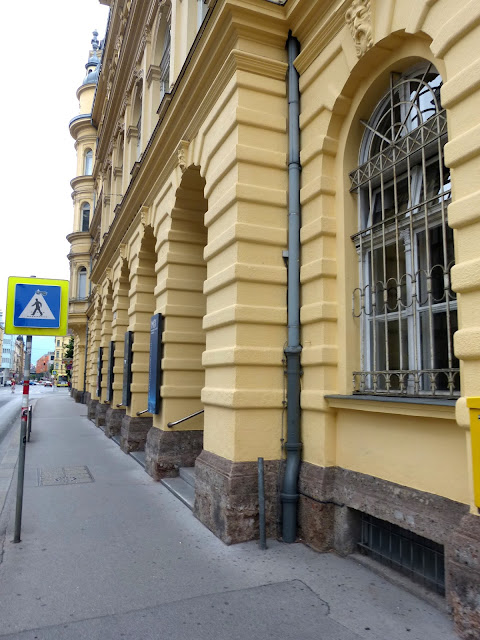 When I went to Europe in 1974, I knew that my parents would feel a lot better about it if I communicated regularly with them. I sent them a letter every few days and arranged that I could pick up letters from them at the main Post Office in Innsbruck. I picked Innsbruck because it was in the center of the Eurail network at that time. 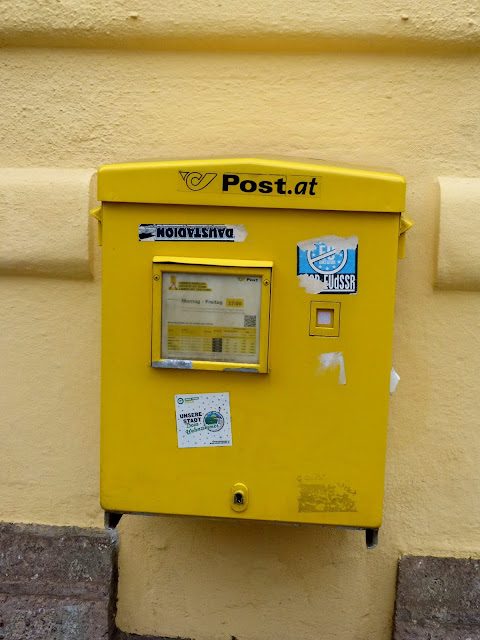 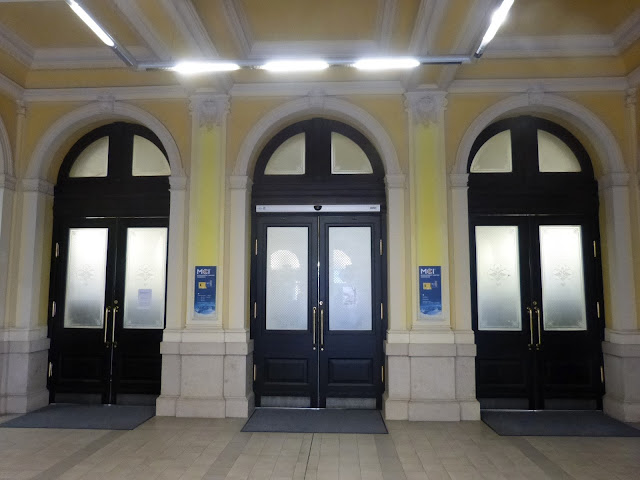 The doors to the Post Office and the Post Restante which was the counter where I would get my letters. These days we just use email. 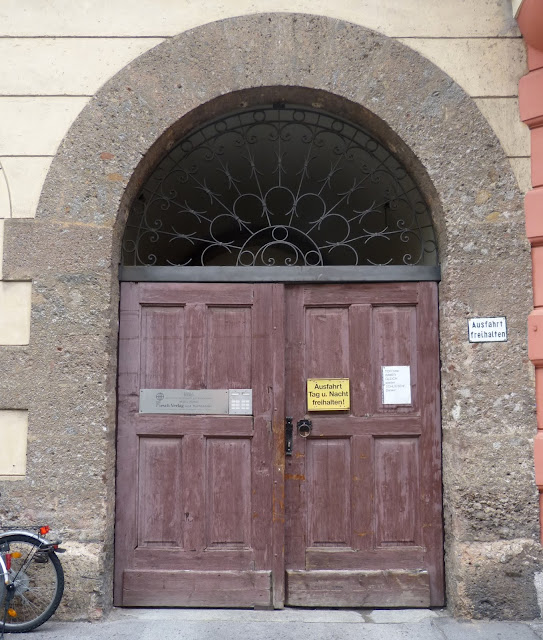 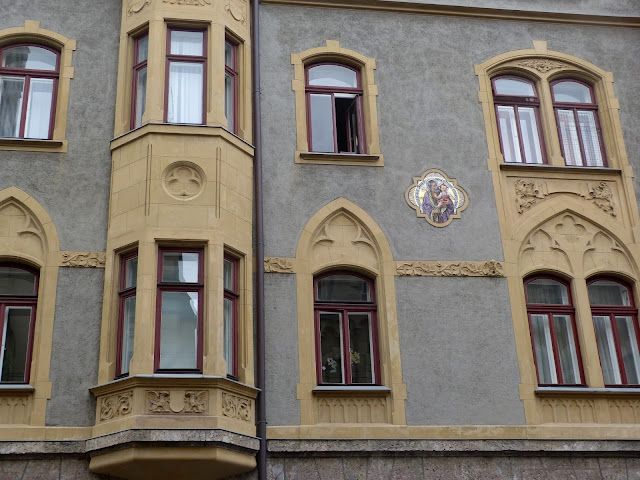 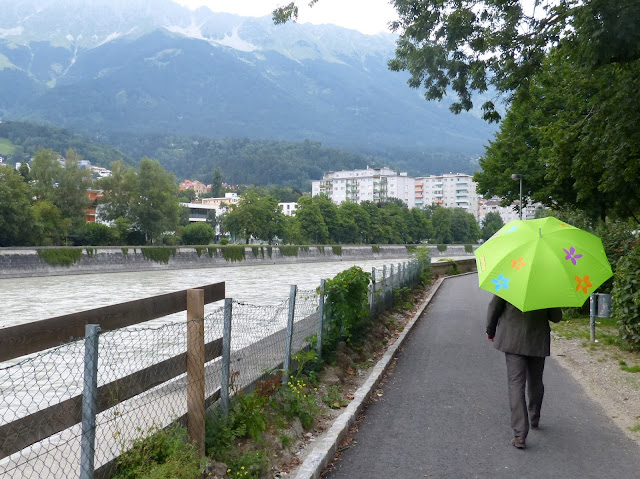 Later in the day we went for another walk and we headed to the river. There were a few spots of rain. 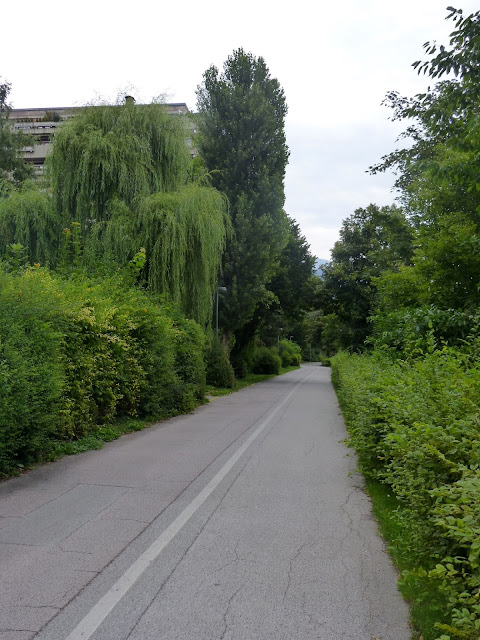 Pedestrian and bicycle path along the river bank. 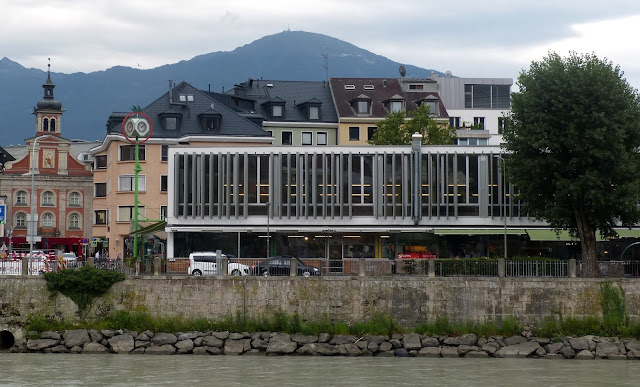 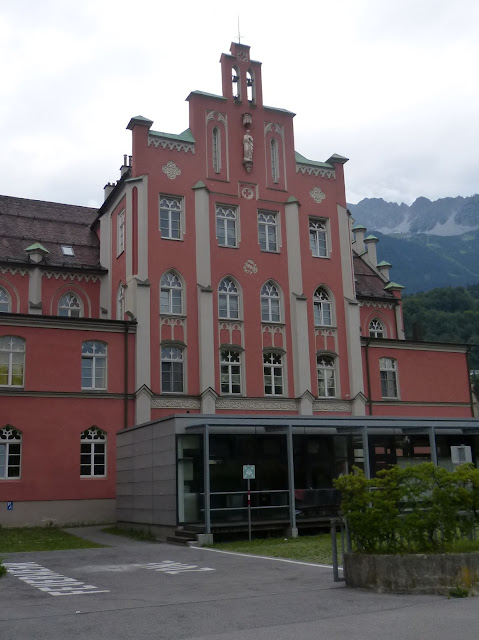 We wondered what this building was as we walked past and it turns out it is a school. 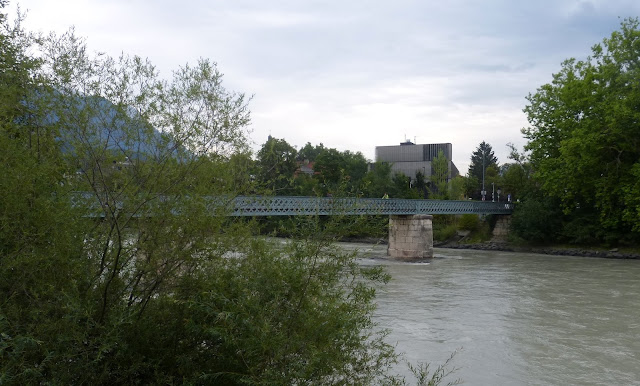 Pedestrian bridge over the river. There came across about a dozen beggars during our walks and one of them had taken up station at the end of the bridge. 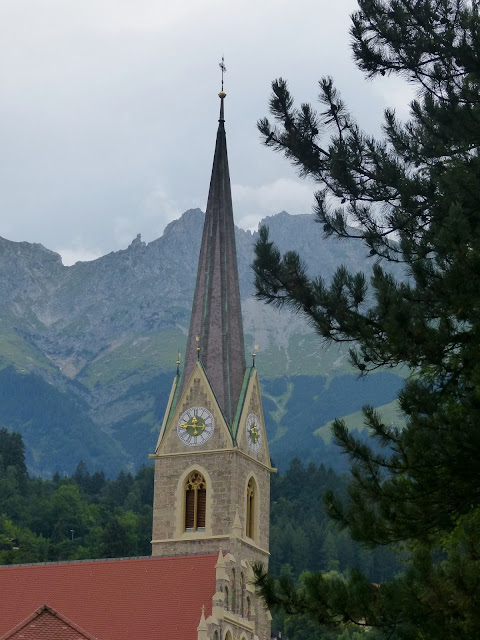 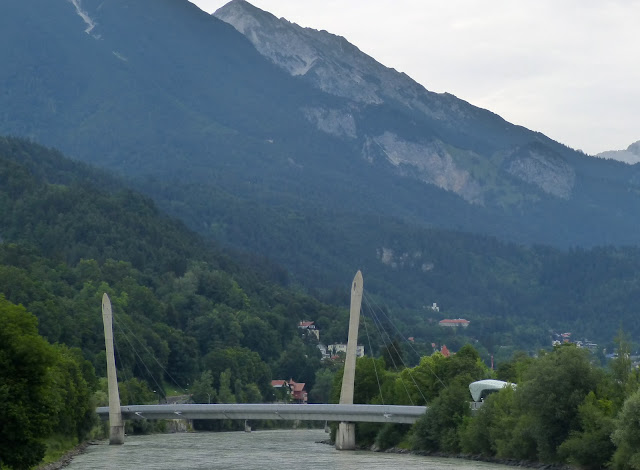 The Hungerburgbahn is a funicular railway linking Innsbruck with the village of Hungerburg about a thousand feet up the mountain side. 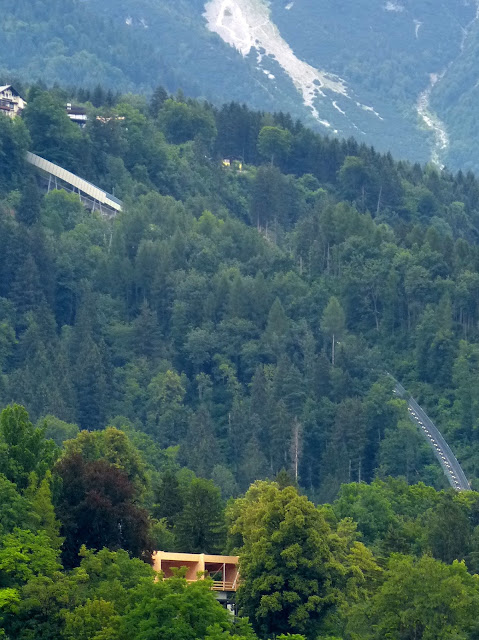 Look how steep the line is. Here is a long video that shows how steep it is. ( 6 minutes into the video)

The steepness put me off riding it particularly the down journey. It would be like a gigantic roller coaster ride and I don't really enjoy riding them. Maybe next time. 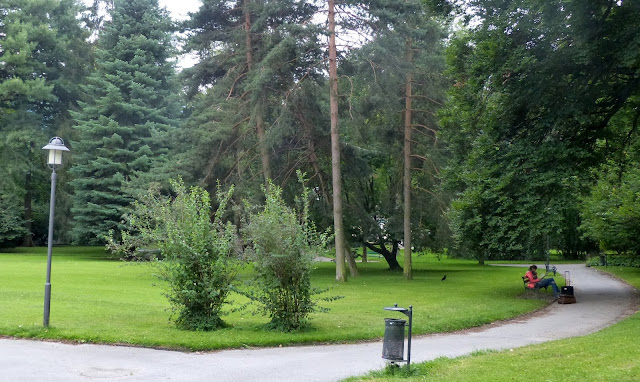 Instead we walked in the Hofgarten which is more our speed these days. 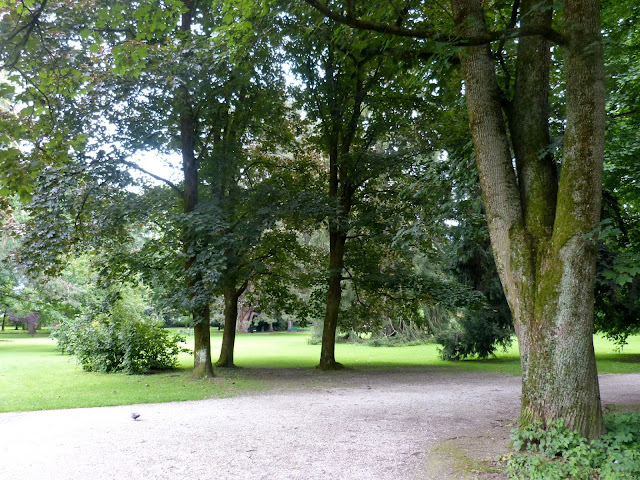 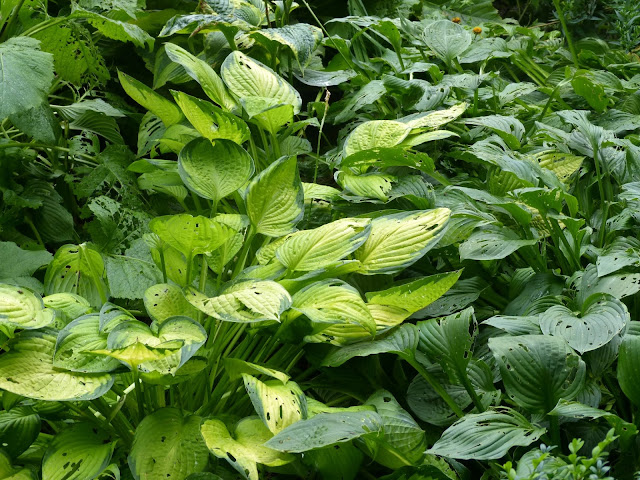 There are not many colours other than green. 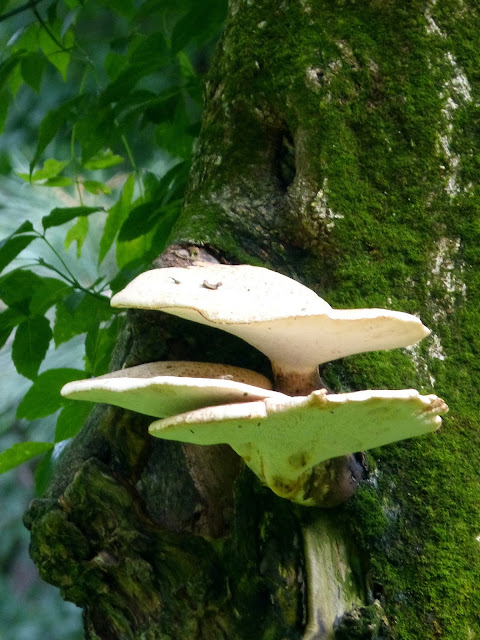 Huge fungus growing on the side of a tree. 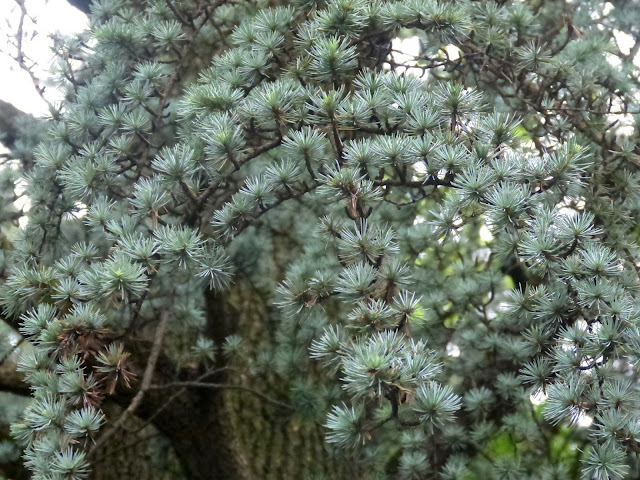 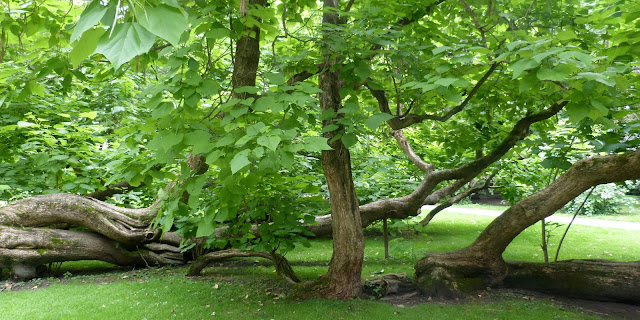 A tree having a rest. 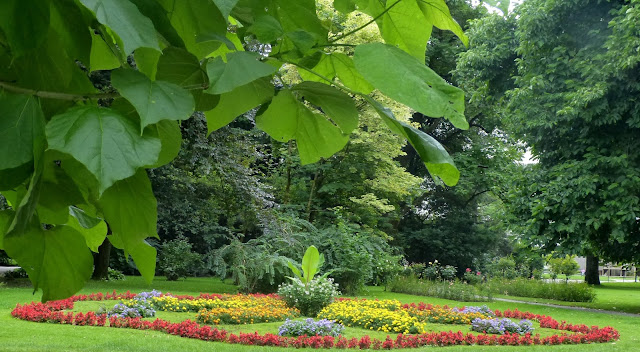 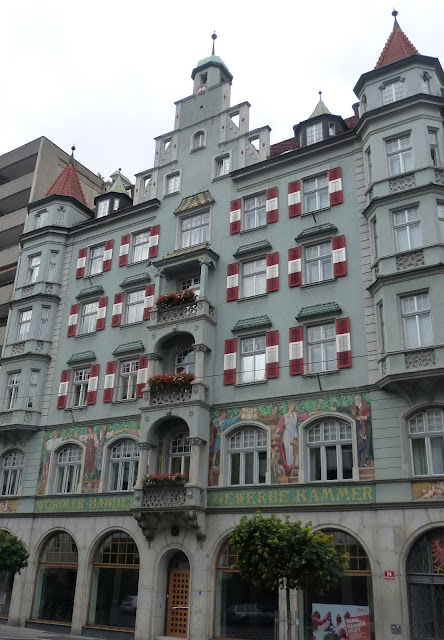 I think we were not in the mood to really appreciate Innsbruck this time. To be honest, I enjoyed Linz much more. It seemed that Innsbruck is much more of a tourist city whereas Linz has fewer tourists and seems to be more dedicated to its own citizens and is therefore more happy and relaxed.