Today and tomorrow  are supposed to be quite hot at about 95 F so we decided to do some sight-seeing in the morning where we could be in an air-conditioned car and with not too much walking. We decided to go to St Die which is about 20 miles west of where we are staying.

On these shorter car trips we tend to avoid the fast highways and trundle down the old slow roads. 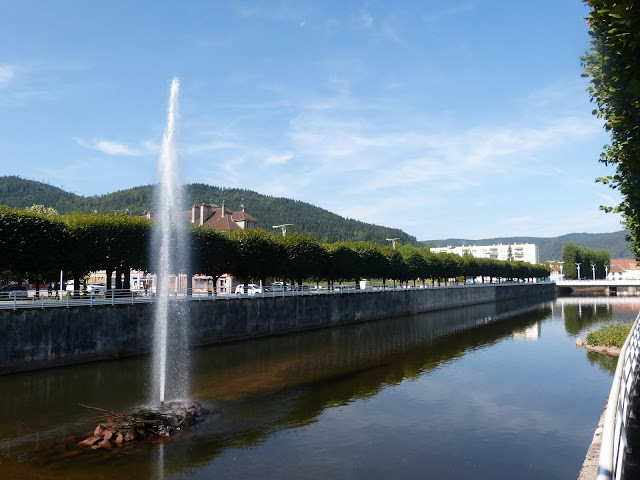 We parked in the centre of town close to the Meurth River. 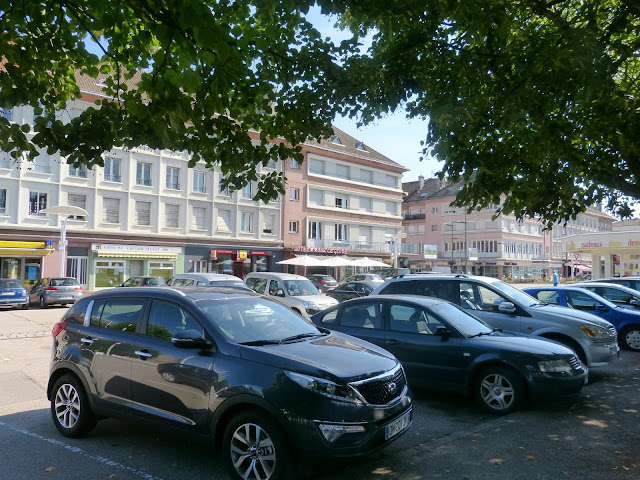 It is pay and display parking. Fortunately the machine takes small denomination coins so I was able to get rid of a few of them to pay for an hour or so. It was already quite hot so we did not plan for a long visit. 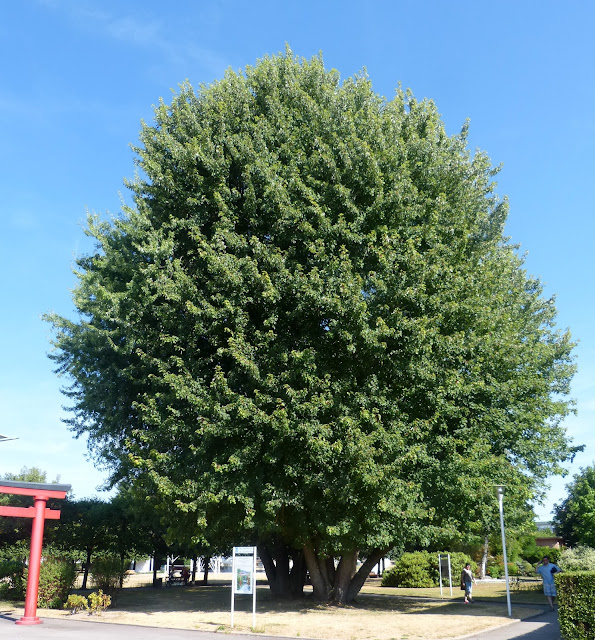 What a magnificent tree. 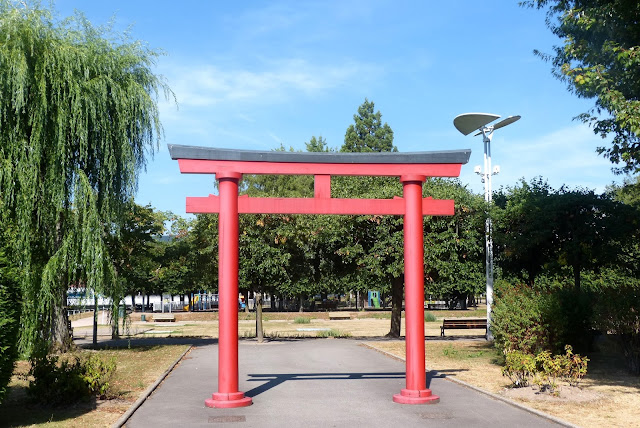 From what we could make out, in 2008 a Japanese garden was built and subsequently dismantled. 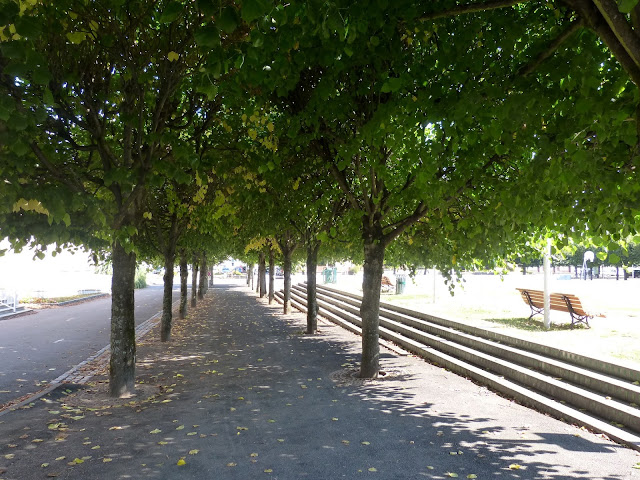 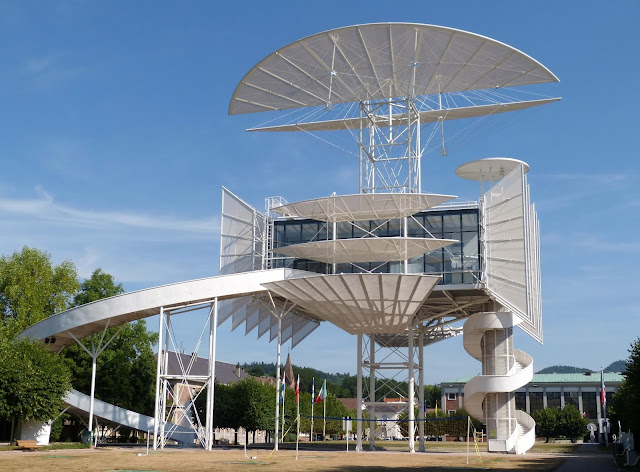 This fantastic object takes pride of place in the gardens. It is called the Tower of Liberty and was first erected in Paris in 1989 to mark the 200 year anniversary of the French Revolution. It was subsequently re-erected in St Die the following year. It is supposed to resemble a bird. 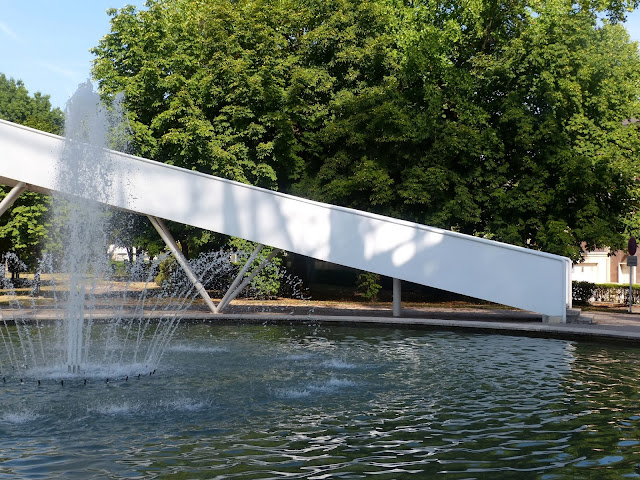 The ramp was closed so we had to use another stair case. 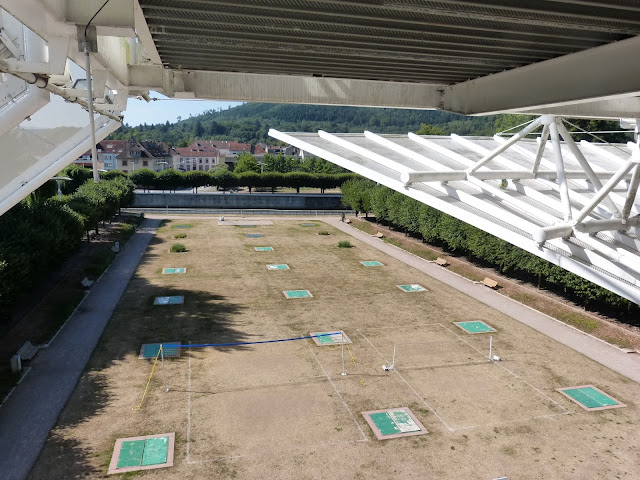 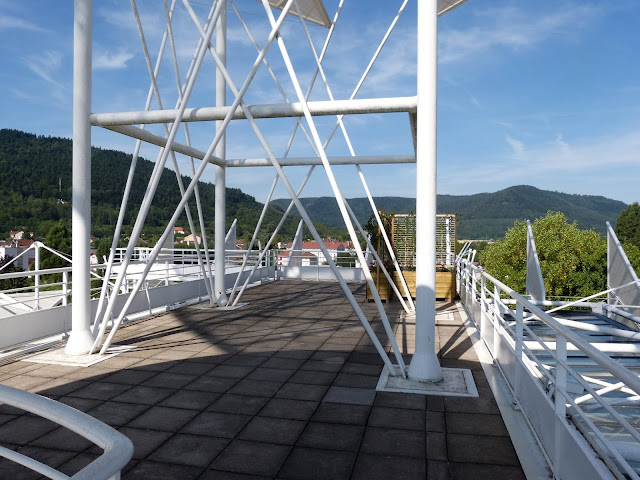 We climbed up to the viewing platform. Good exercise on a hot morning. 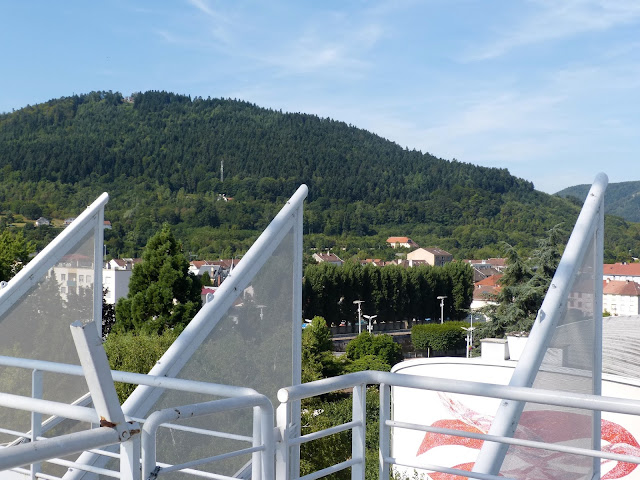 View to the nearby hills. 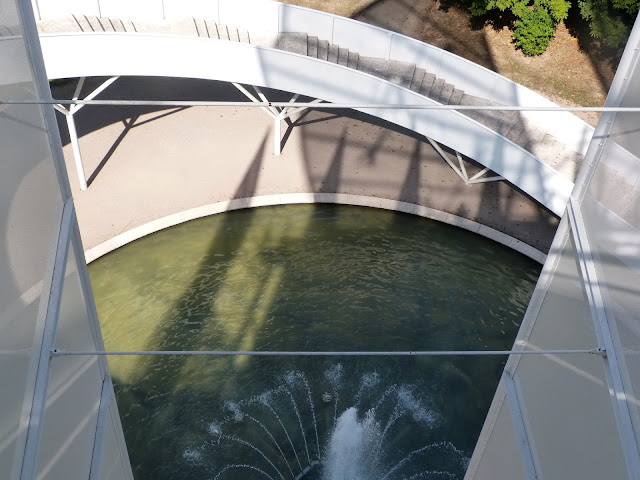 Looking down which gives me a little vertigo. 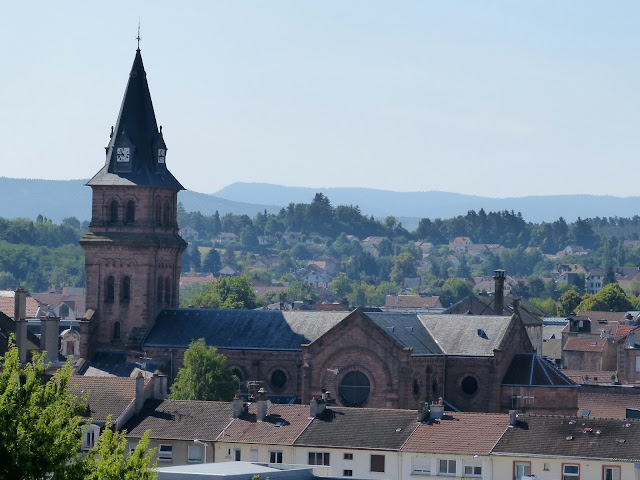 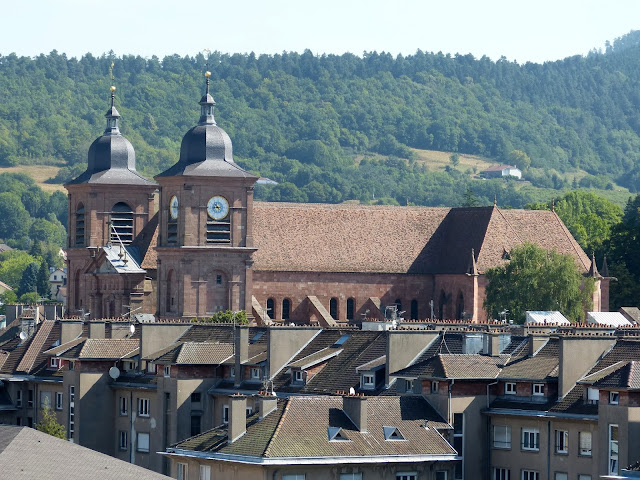 The Cathedral which we visited later and gets its own blog. 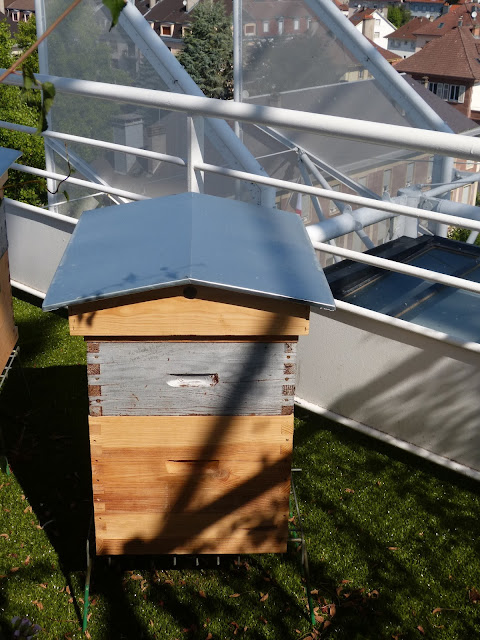 There were a couple of bee hives in a fenced off area. 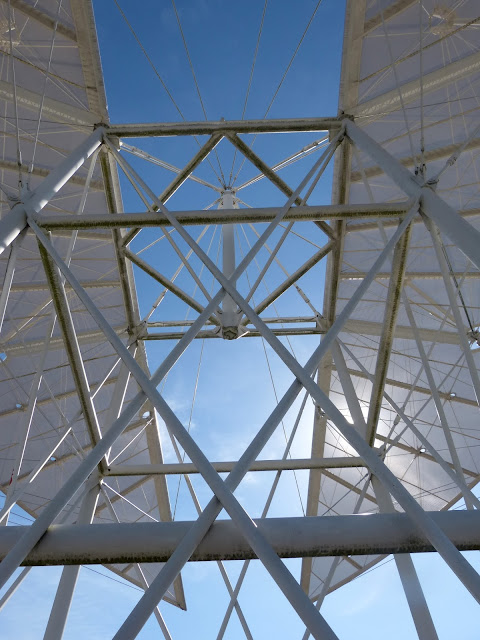 There is apparently a museum of jewelry by Georges Braque and Henri-Edouard Heger Loewenfeld in the structure but we could not see where. I don't think it was open. 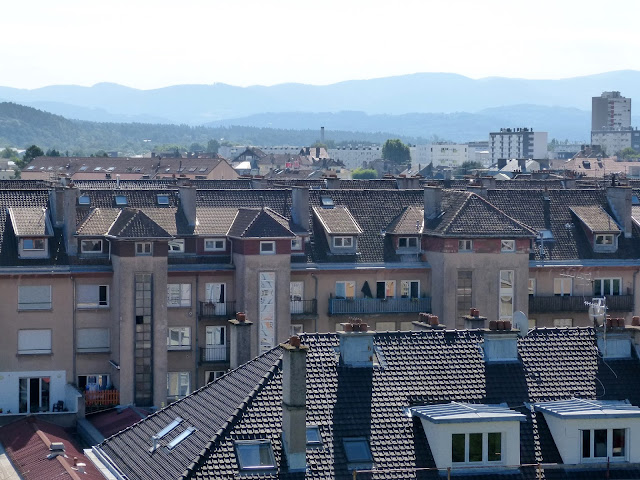 Much of the centre of St Die was destroyed in November 1944 so you don't see old houses. The US 103rd division advanced into the town and the retreating Germans burned much of  the town and deported the citizens to Germany for forced labour. Allied bombers then destroyed much of what was left. 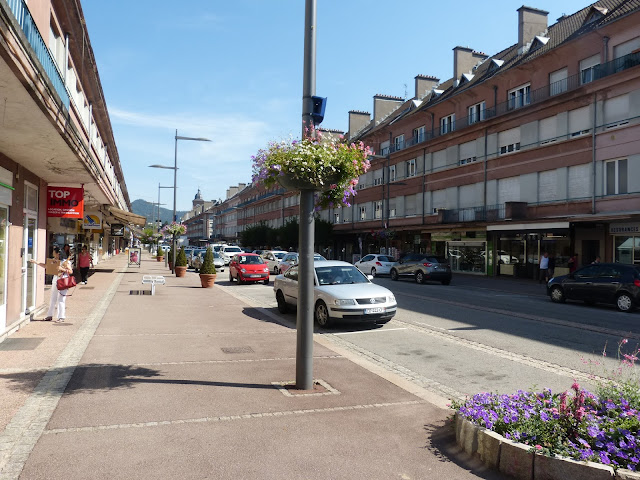 So this was all built after the war. The wide footpaths make strolling quite pleasant, particularly if you are on the shady side of the street on a hot summer morning. 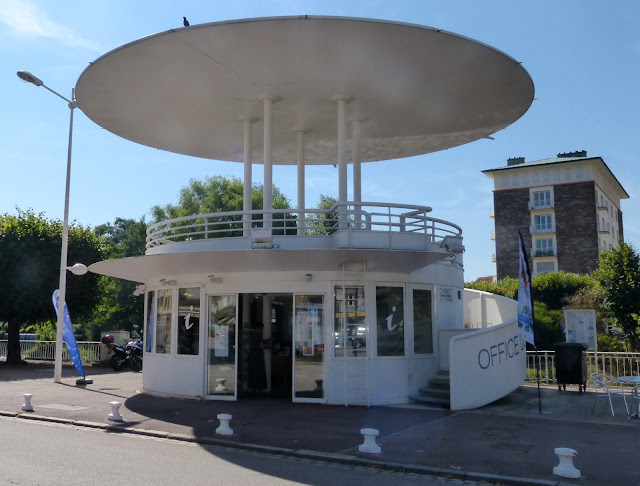 The tourist office where we got a map and some brochures.

No we did not indulge. 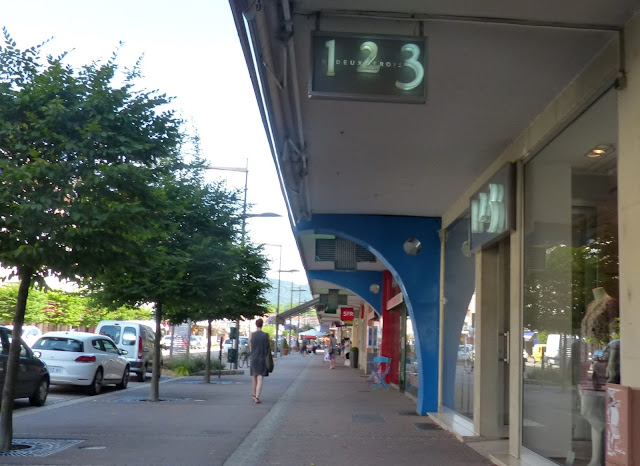 The shady side of the shopping street. Further along the street the outdoor cafes were doing good business. 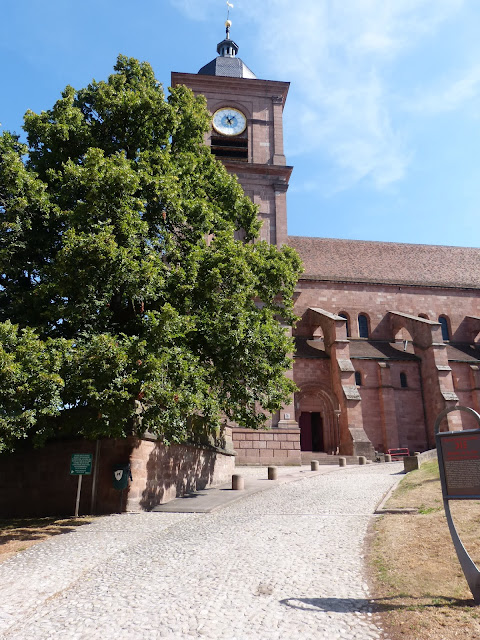 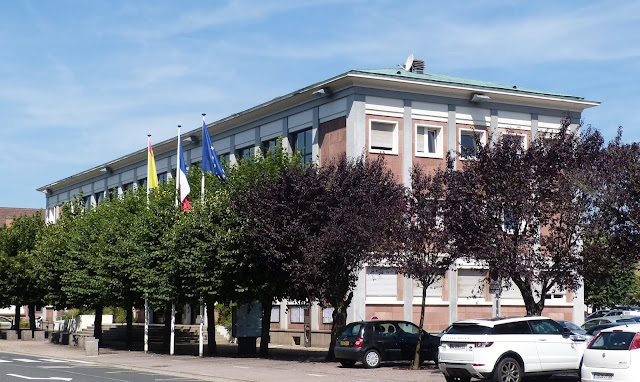 The rather non-descript Town Hall. The famous architect Le Corbusier developed plans to rebuild St Die after the war, but the plans were rejected. There is a factory building in St Die that was designed by Le Corbusier called the Duval Factory, but we did not see it. You can see more about the grand plan here. 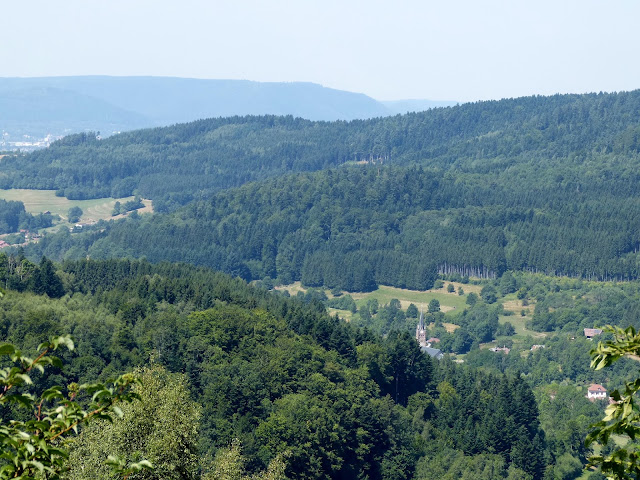 There is a mountain range that we had to cross on or way between the two towns. We stopped at a lookout on the way home. 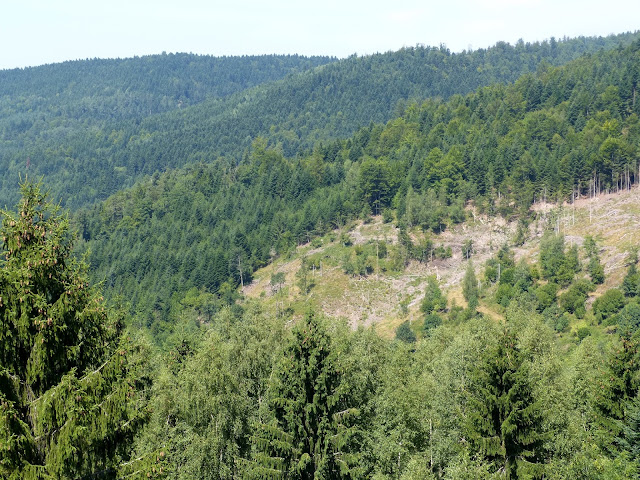 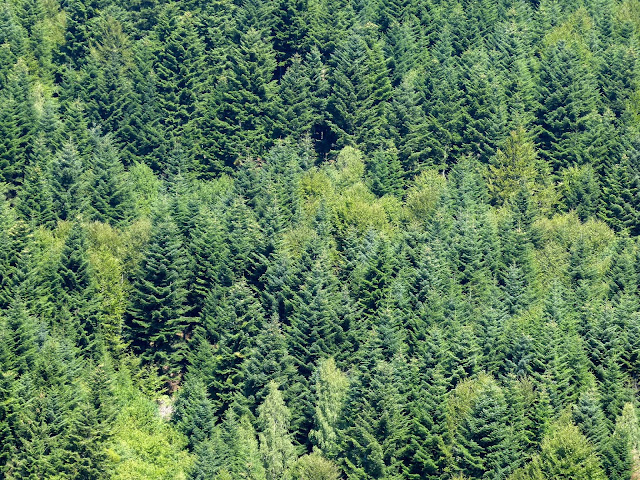 The pine trees are very dense and very green. 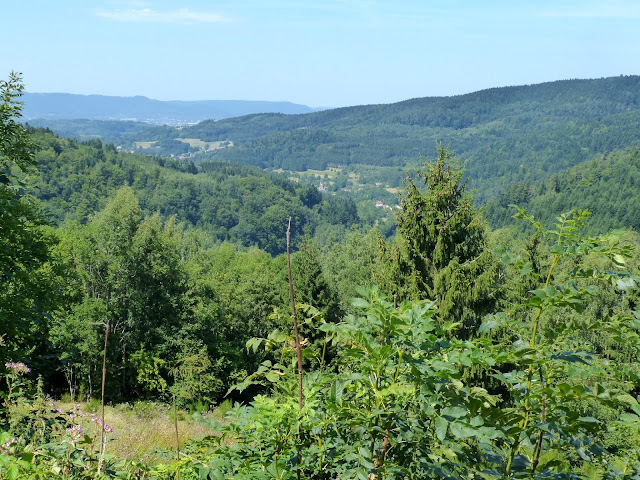 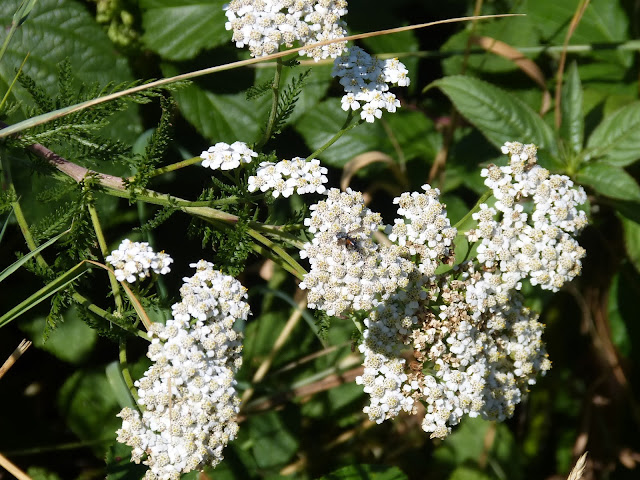