The beer festival in Sainte-Croix-aux-Mines

We had noticed a sign above the street that there was to be some sort of beer festival on the weekend before we returned to the US. One of the exchange couples returned to their house on Friday while the other couple (who own the house we are staying in) were spending a weekend in New York City. Although he was still suffering from jet-lag, Phillipe came round to the house to give us our car keys and to arrange the timing of our departure to the airport on Monday.

Philippe told us that he was a member of a band that was playing at the beer festival and we would be his guests at the lunch the next day. 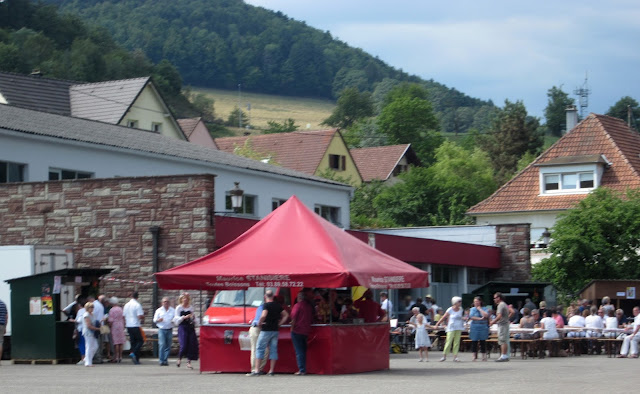 We duly turned up about 11:30 to find a crowd and some beer and food tents. 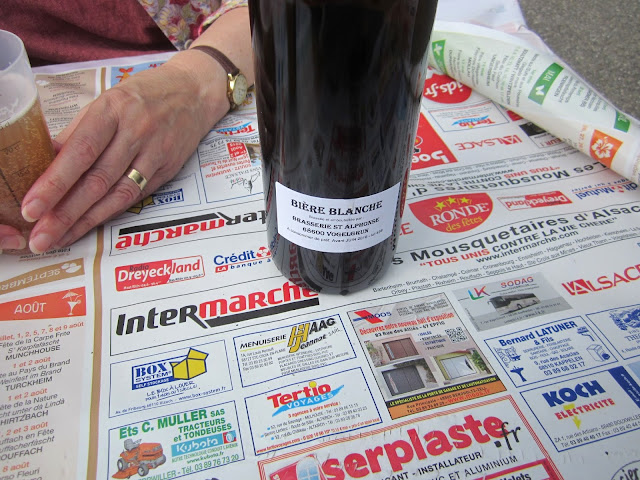 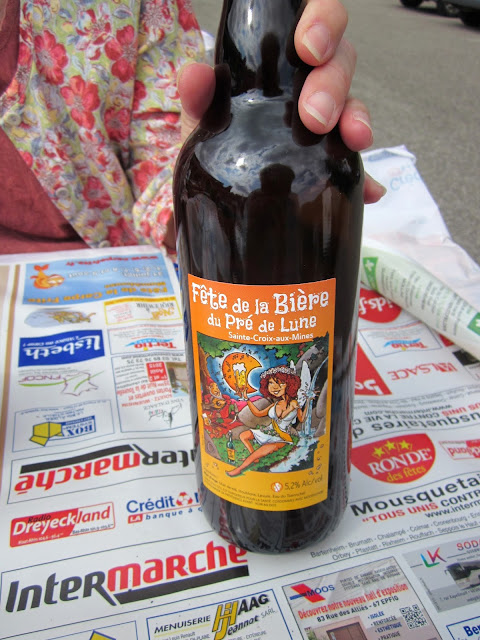 We went to one tent to buy a ticket and a couple of glasses. At another place we exchanged the ticket for this 750 ml bottle of beer. Note the alcohol level of 5.2%.

The beer was brewed specially for the event and Phillipe told us that 9000 bottles were made. 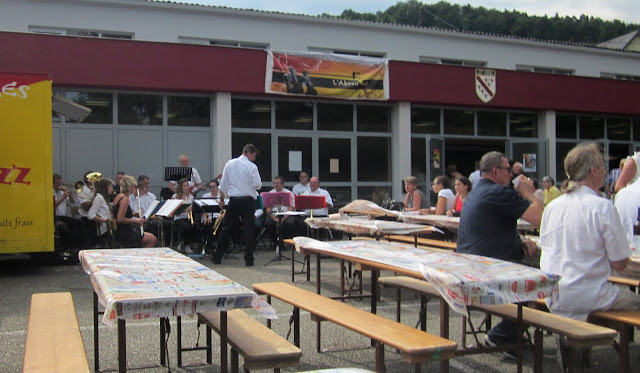 We found a table where we could watch Phillipe do his Bill Wyman act on the bass guitar. You can see him standing at the back of the band.

The band in action. The conductor beat on an anvil with some mallets. 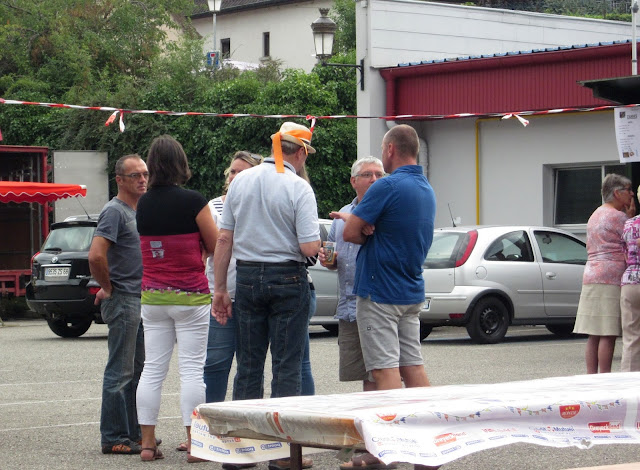 If you were one of the officials you got to wear a straw hat with an orange ribbon. 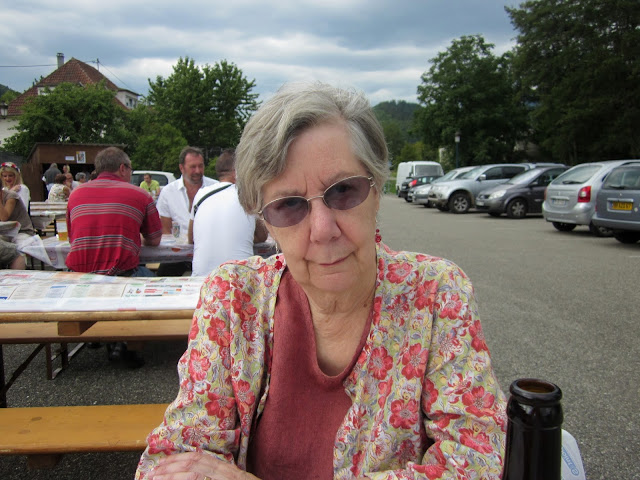 We had a discussion about cell phone cameras versus regular digital cameras. As most of you know, cell phone cameras can produce wonderful results these days. However I reckon that the biggest advantage of a regular digital camera is that you can take pictures very quickly if necessary. I snapped this photo of Marianne in a couple of seconds. It would take me two seconds at least to turn on the phone.

I used my old small Canon A1200 for these photos. It produces a decent photo and slips easily into a pocket. However it does have some shutter lag compared to our bigger Lumix. 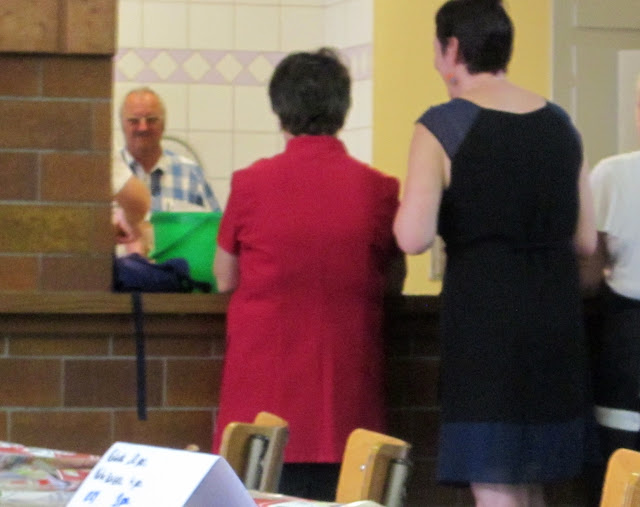 The band finished their performance about 12:30 and Phillipe invited us inside to a reserved place at long tables. He had some tickets that he gave to some volunteers who were bring the food out. 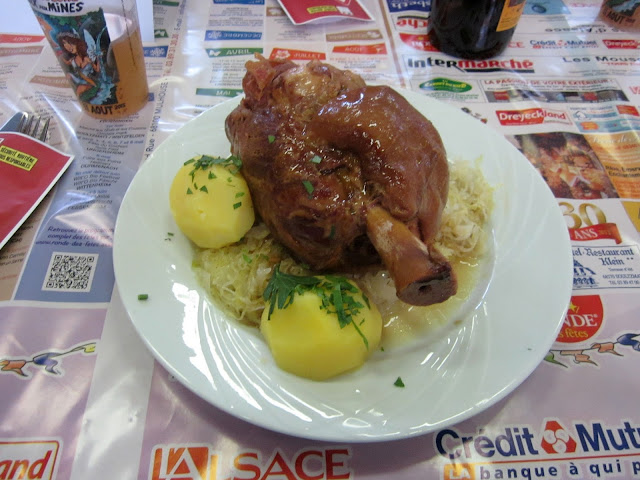 Lo and behold, an even bigger pork leg than the one I had in Bamberg. This was the only dish and everybody was given one this size. 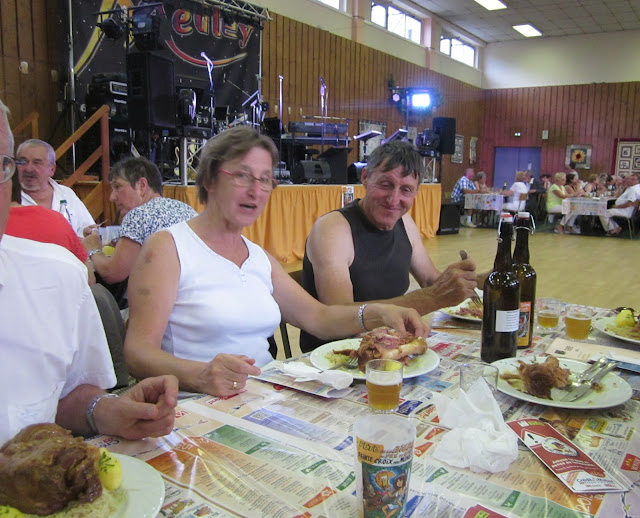 This was the first time that the beer festival was held and the lady was amazed at the size of the pork leg. I asked her if she needed to order another one and she laughed. 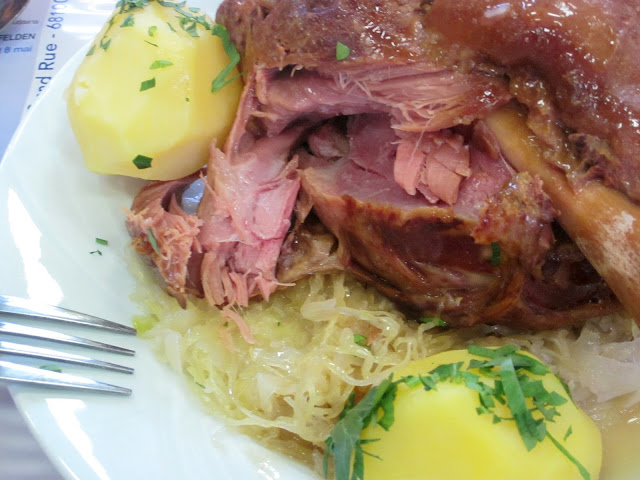 I suspect they had been cooked in the special festival beer because it did not have the smoky taste of the Bamberg version. It was just as delicious but really filling. Phillipe bought a couple more bottles of beer so there was plenty to eat and drink. 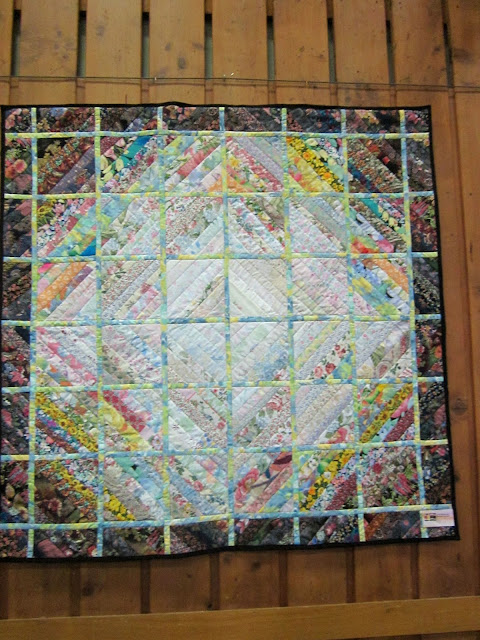 We could have stayed for a dessert but we could not eat any more and we knew Phillipe was still jet-lagged and would like to go home for a nap.

The quilting tradition is strong in this area so there were quite a few quilts hanging on the walls. 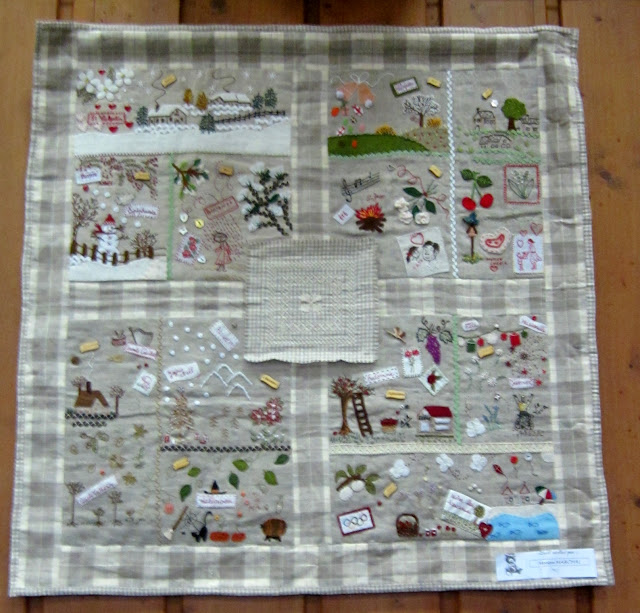 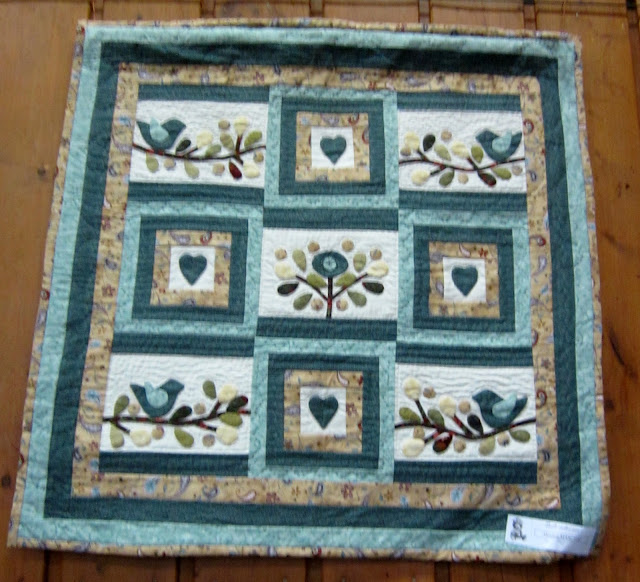 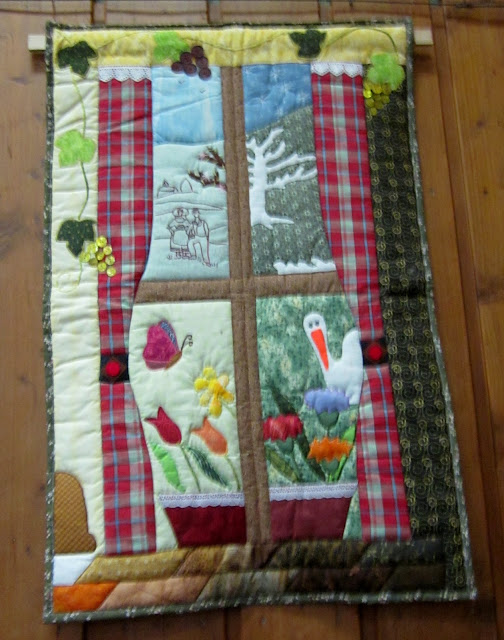 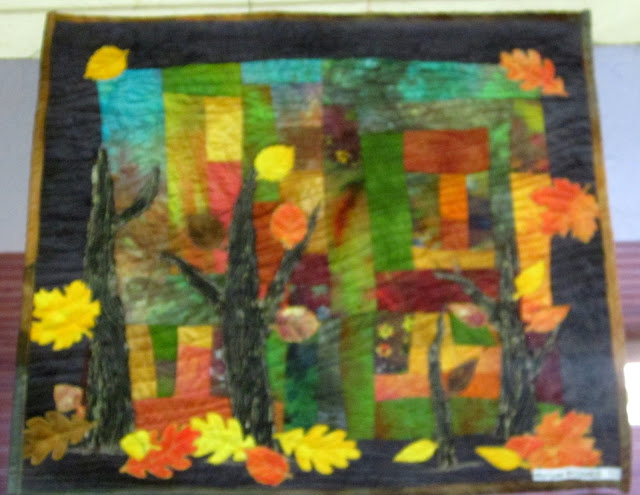 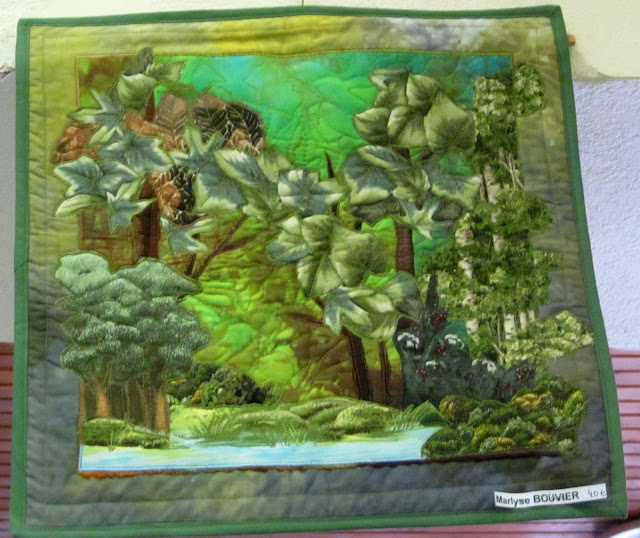 We said goodbye to Phillipe and thanked him for hosting us at the festival. On our way home along the bicycle path, I noticed several people waiting in a line all facing away from the path. Why, I don't know. It will just be another sweet mystery of life.

After all the beer and food, I took a two hour nap.

We have really enjoyed our time here in Saint Croix. The house was very comfortable and we saw quite a number of new things even though we had spent several weeks a few miles away back in 2011. Phillipe told us that they had enjoyed our house and the places they had visited from Philly to Washington. Even Atlantic City! They particularly enjoyed meeting our friends Wendy and Rich, Christine and Amanda.