A detour to Carnegie Hall and Central Park

No doubt you are wondering why Carnegie Hall should be the main subject of my first blog for the trip. Read on. 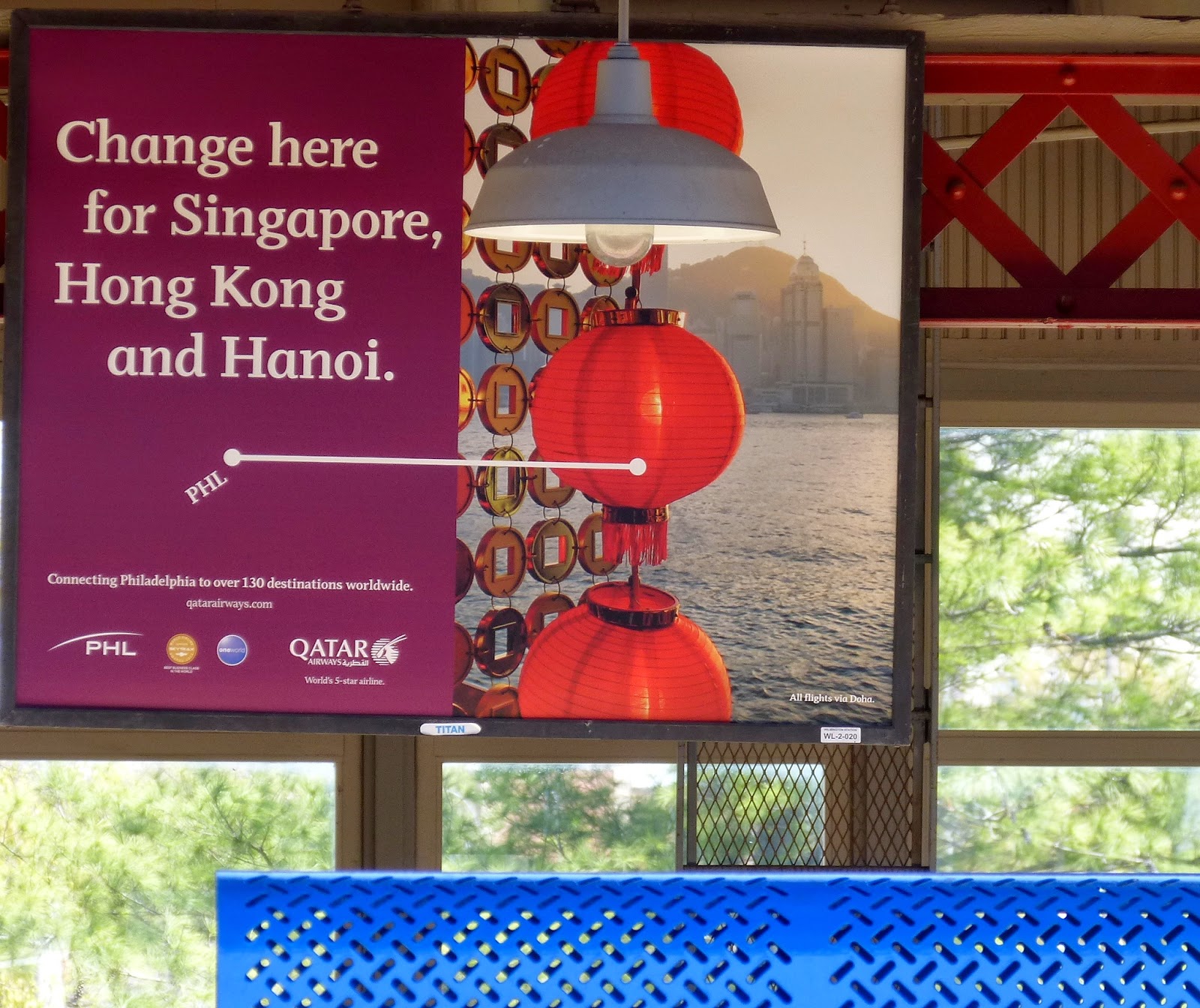 Marianne dropped me off at Wilmington Station so that I could take the commuter trains to New York. I thought this sign was a good portent of things to come. My phone beeped and a message showed that my plane from JFK to Oslo would now leave very late. 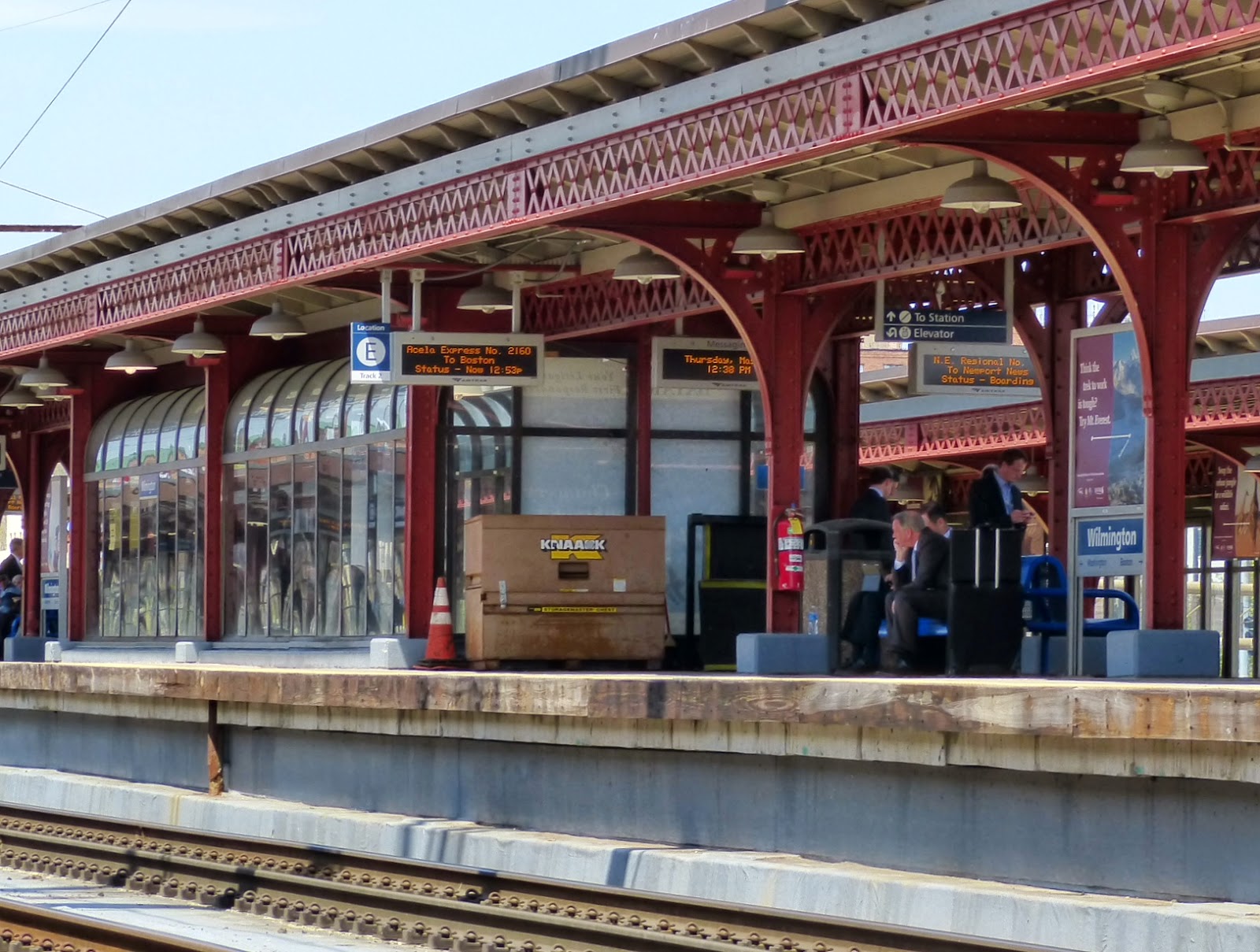 I waited patiently for my train but it never showed. After about an hour, they announced that there was a problem with a transformer and we should wait for the next train. It never came either so I bought an Amtrak ticket and proceeded up to New York. Meanwhile, I received another message saying that the flight was cancelled and I would be given a hotel voucher for an overnight stay.

As you might imagine, this was not good news, but what can you do. The airline is Norwegian Air and the plane was supposed to be a new Boeing 787 Dreamliner. They must be having problems with this plane because I had noticed that the plane was often delayed leaving JFK. 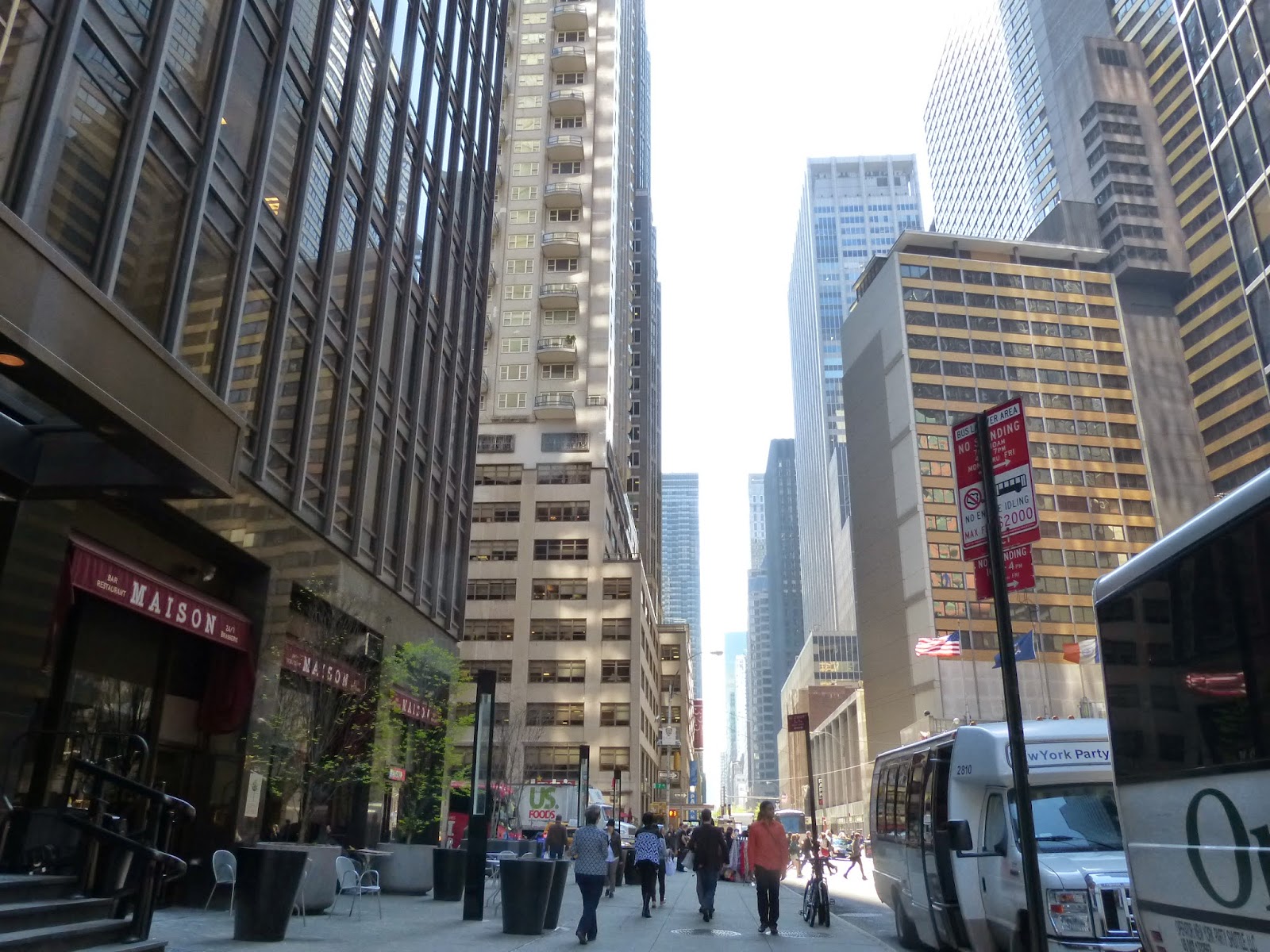 The next morning, I looked for things to do out near the airport but to be frank, there isn't much, so I decided to go on a tour of Carnegie Hall which started at 11:30. I duly took the E train into Manhattan and came up at 7th Avenue. It looked just like the rest of Manhattan. Tall buildings, lots of people and lots of noise.

You can read about the hall here. 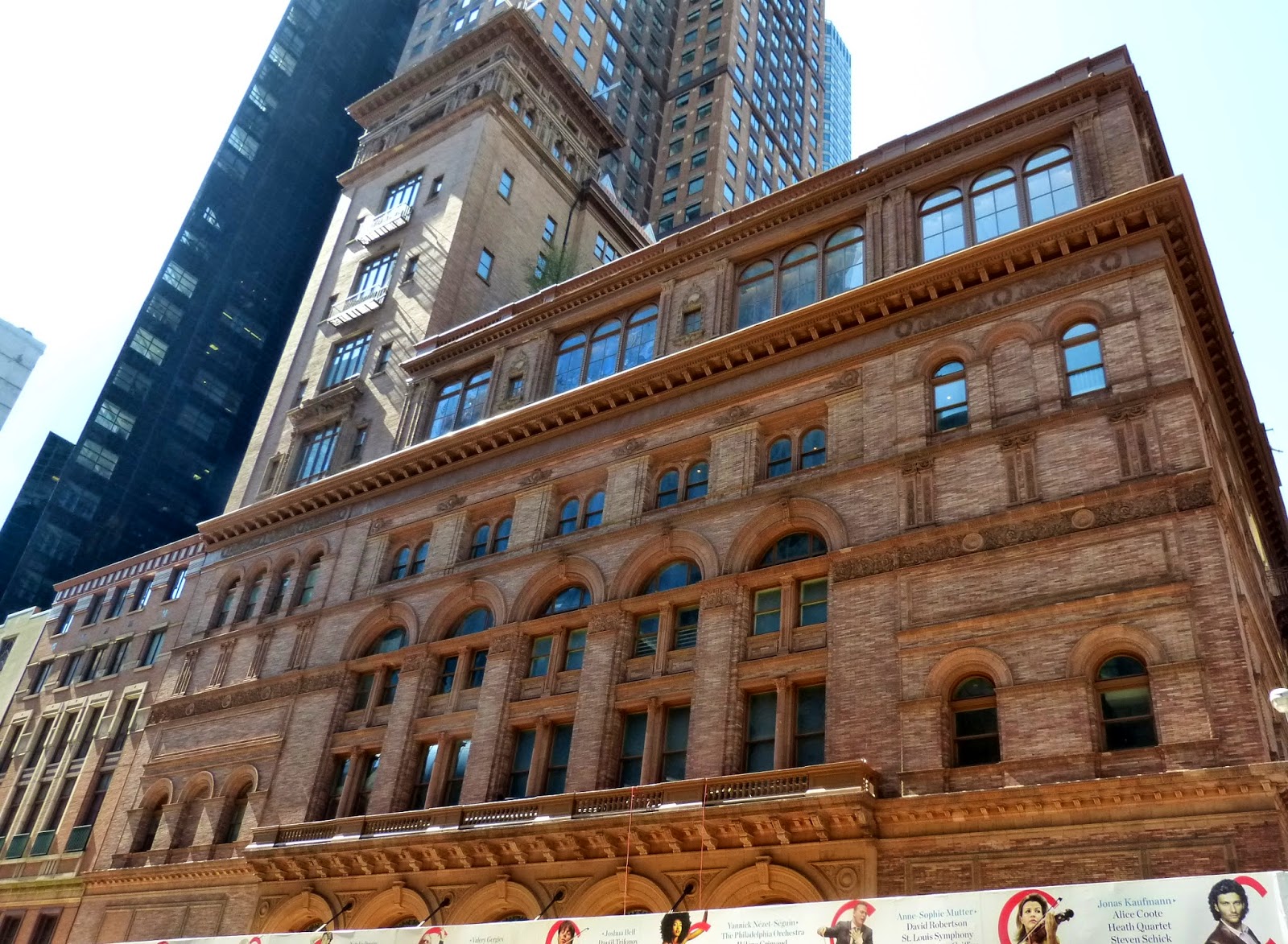 It was just  few blocks north of the subway station. I found that tickets for the tour were sold at 11:00 so I walked on to Central Park. 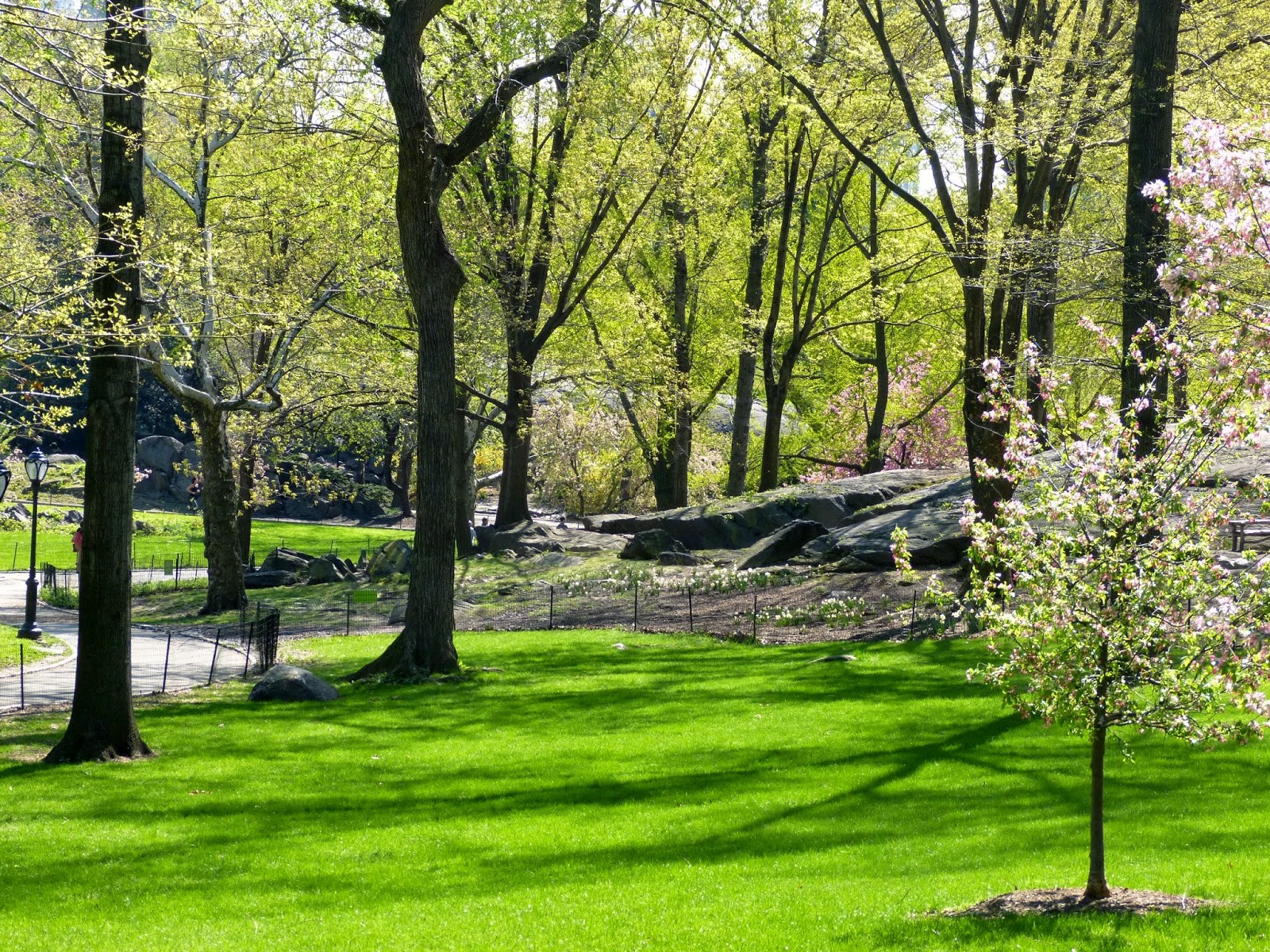 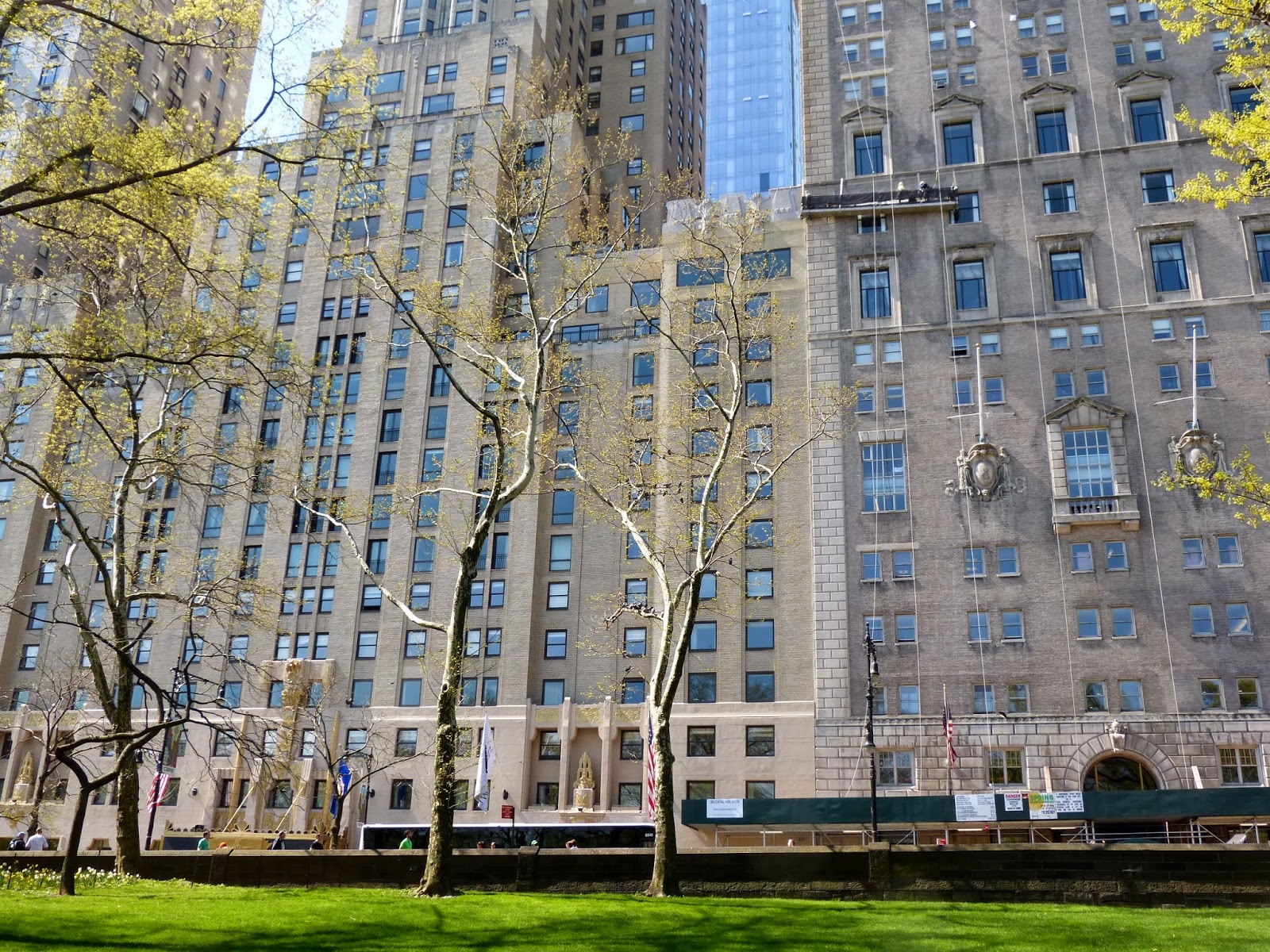 I wandered along the southern edge of the park with the comparative brutal facades of tall buildings across the street. 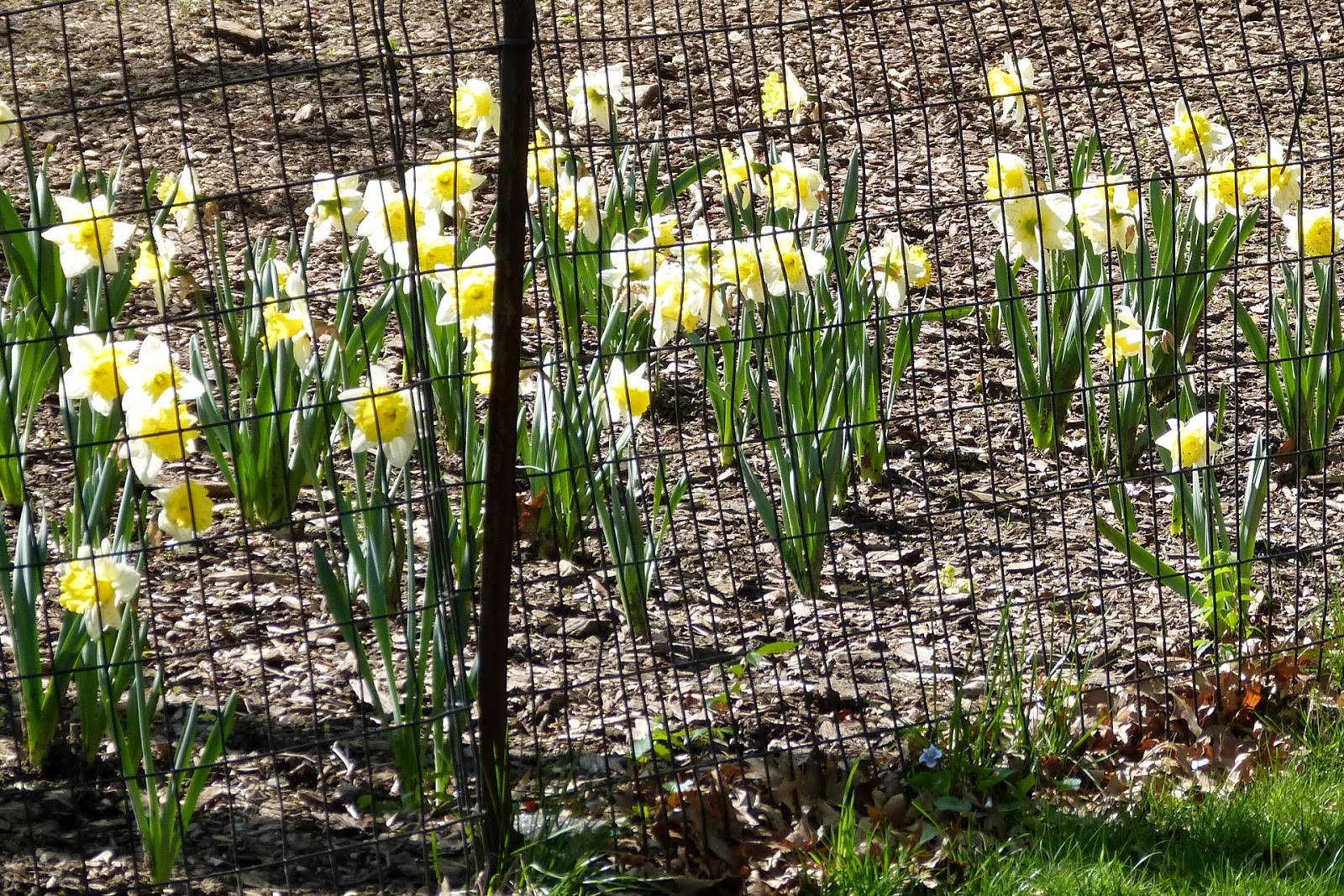 The daffodils were still in bloom. Ours are pretty well finished but New York is a couple of hundred miles north of where we live. 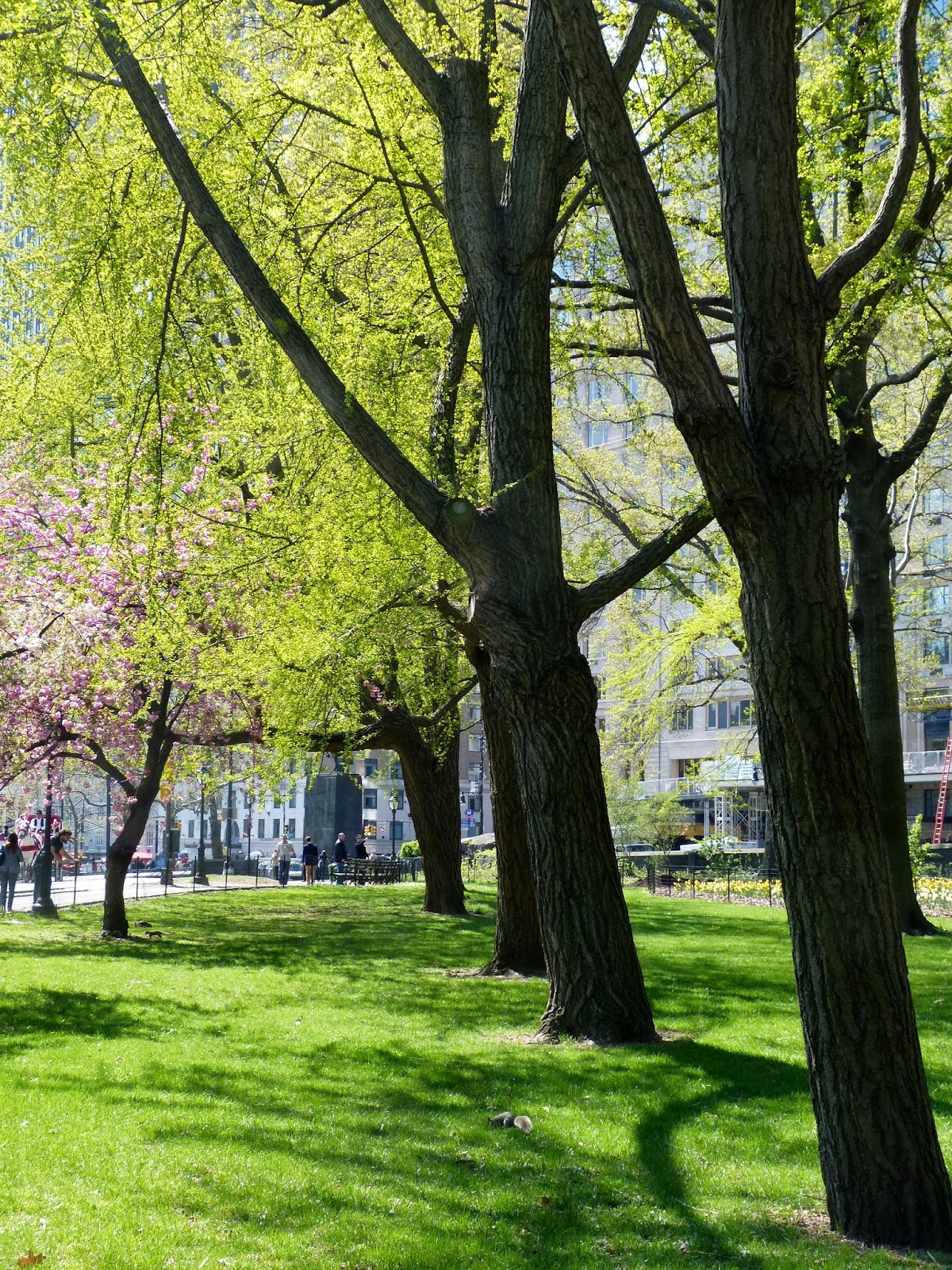 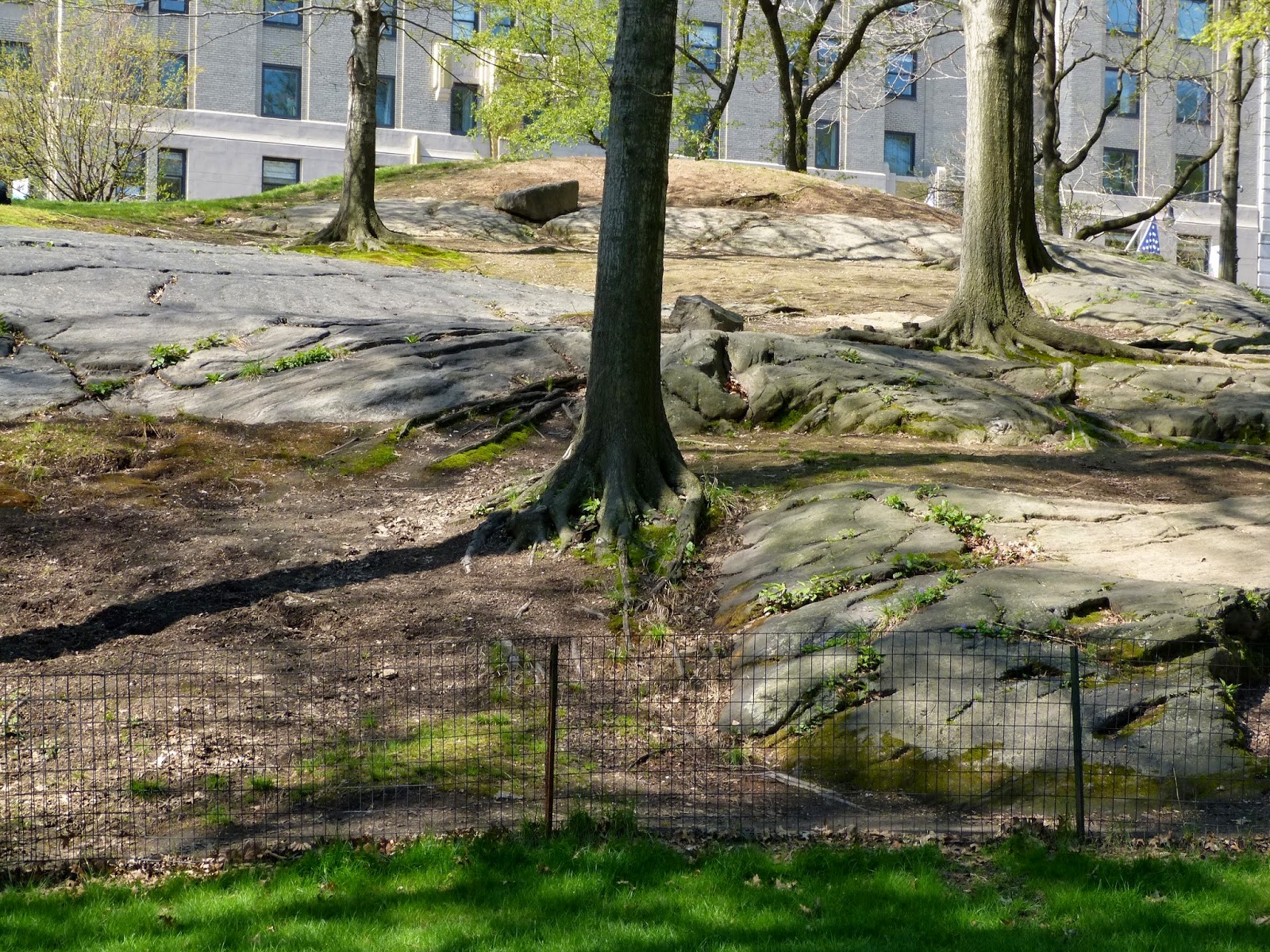 Massive rock outcrop. One of the reasons why there are so many tall buildings in New York is that this rock forms such a good foundation. 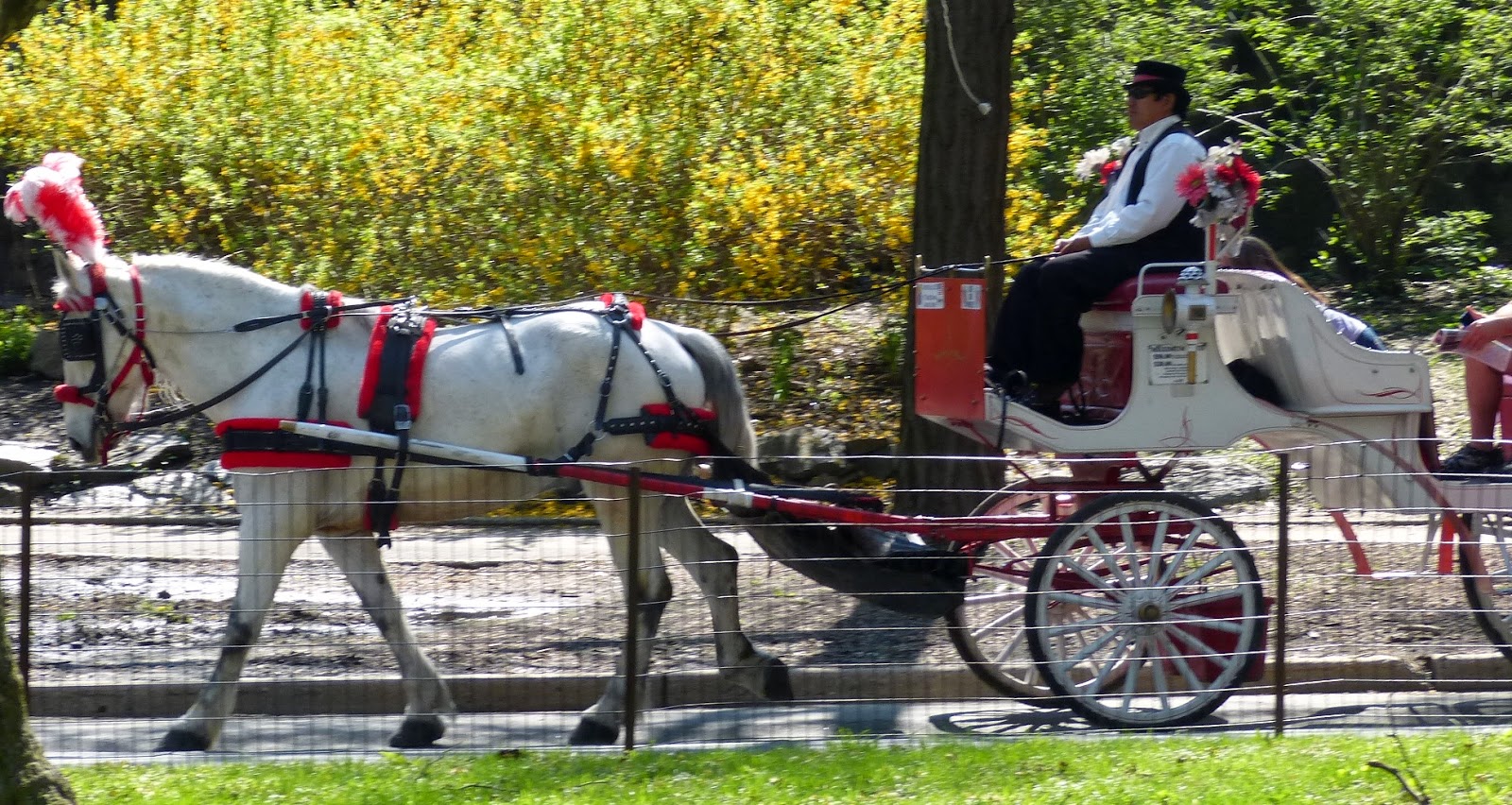 There were carriages everywhere. 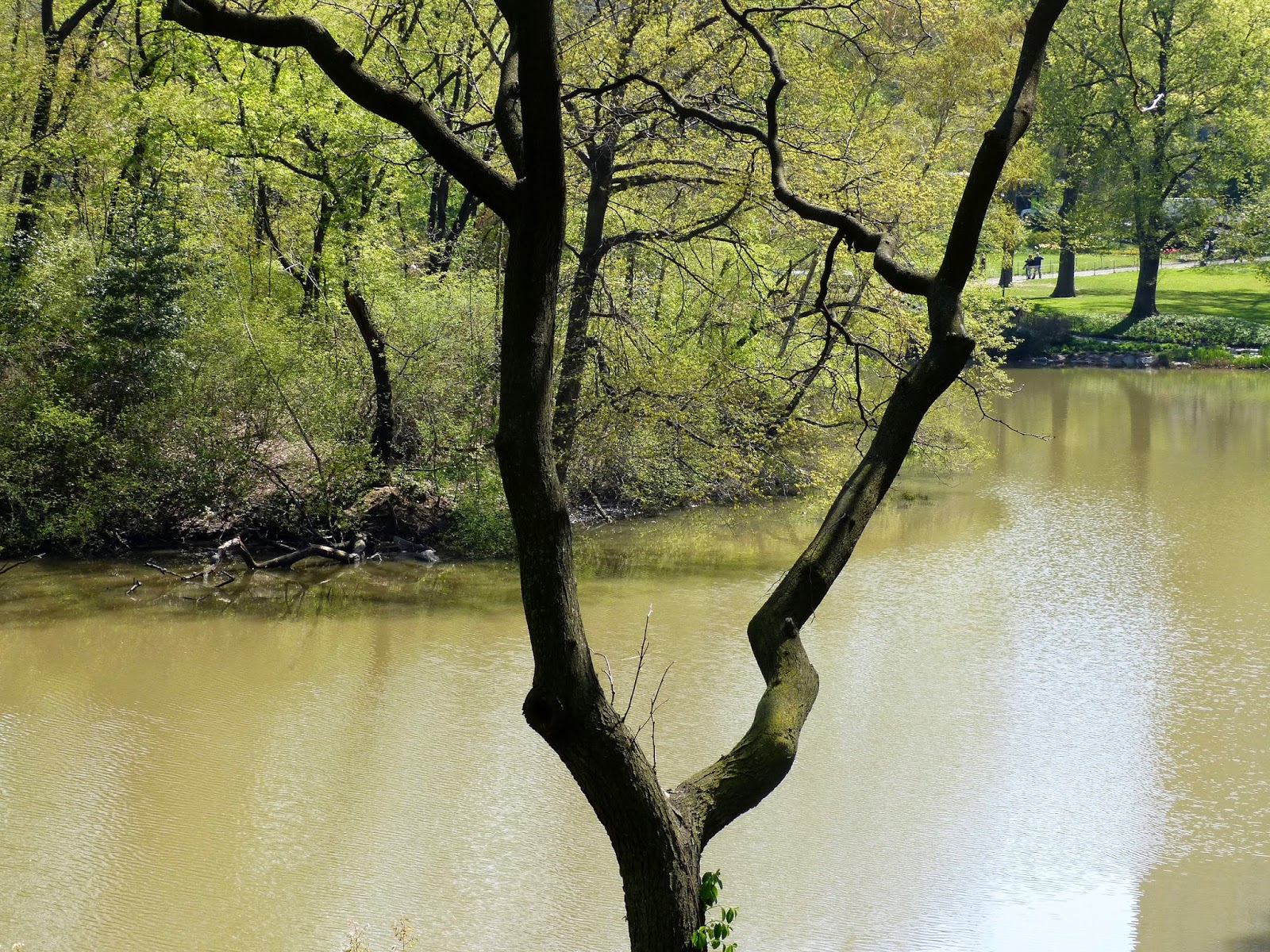 Central Park is my favorite part of New York. I dislike the hustle and bustle of this big city and prefer to relax in this beautiful environment. 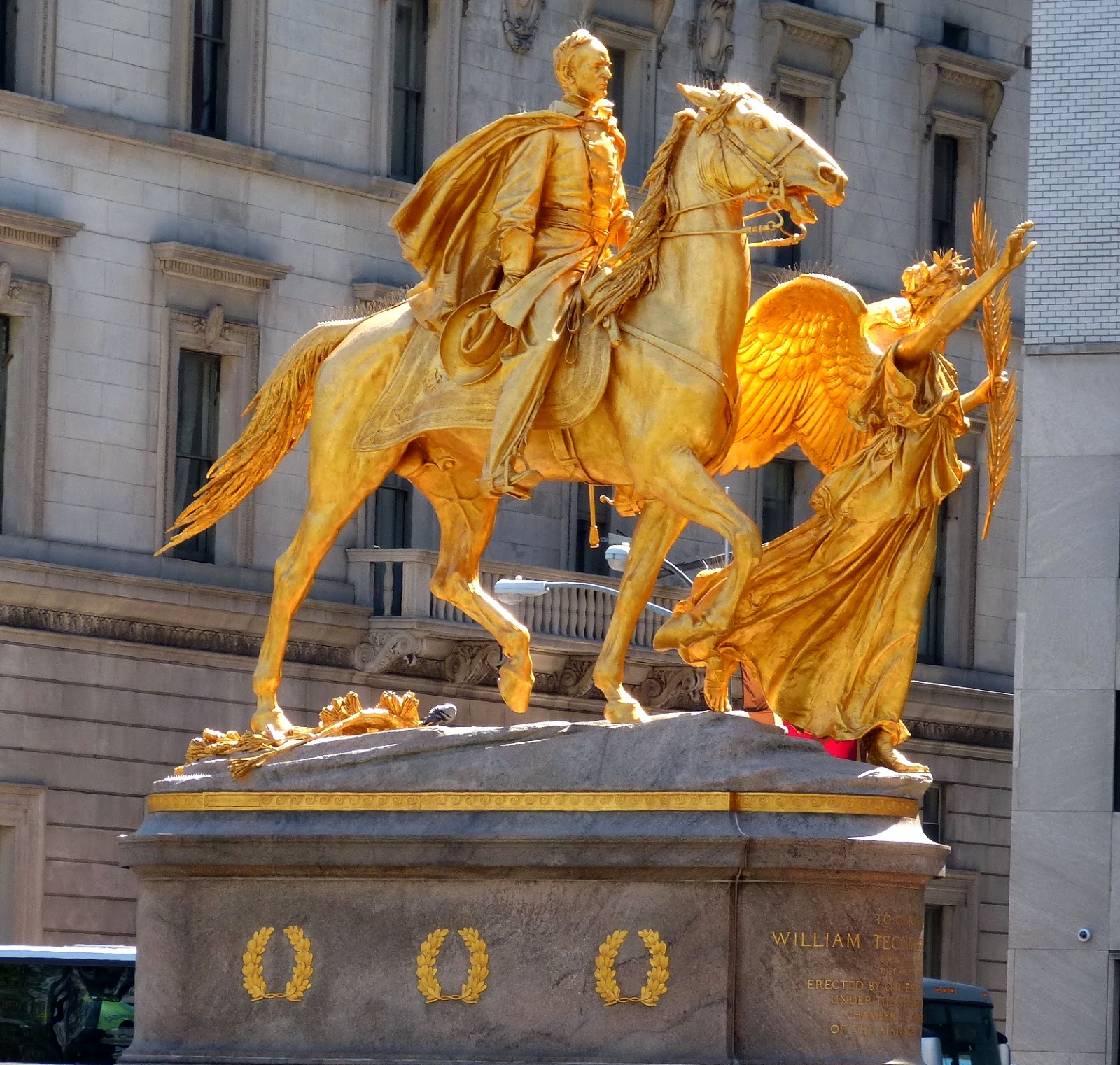 Statue across from the Plaza Hotel. 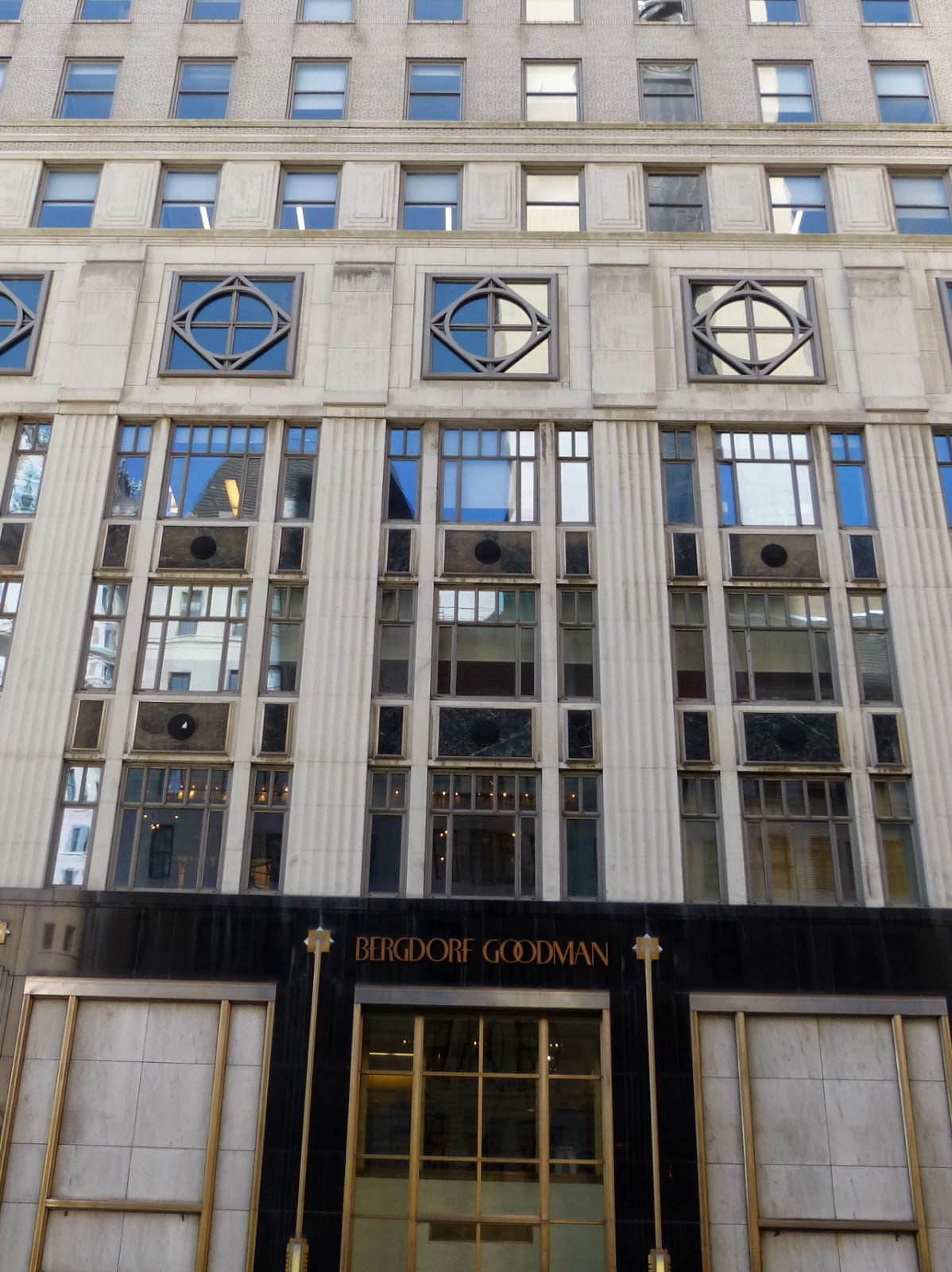 I strolled down 5th Avenue for a while. Eventually I got back to Carnegie Hall where I had to wait a few minutes before the doors opened. I noticed this beautiful facade on the building across the road. 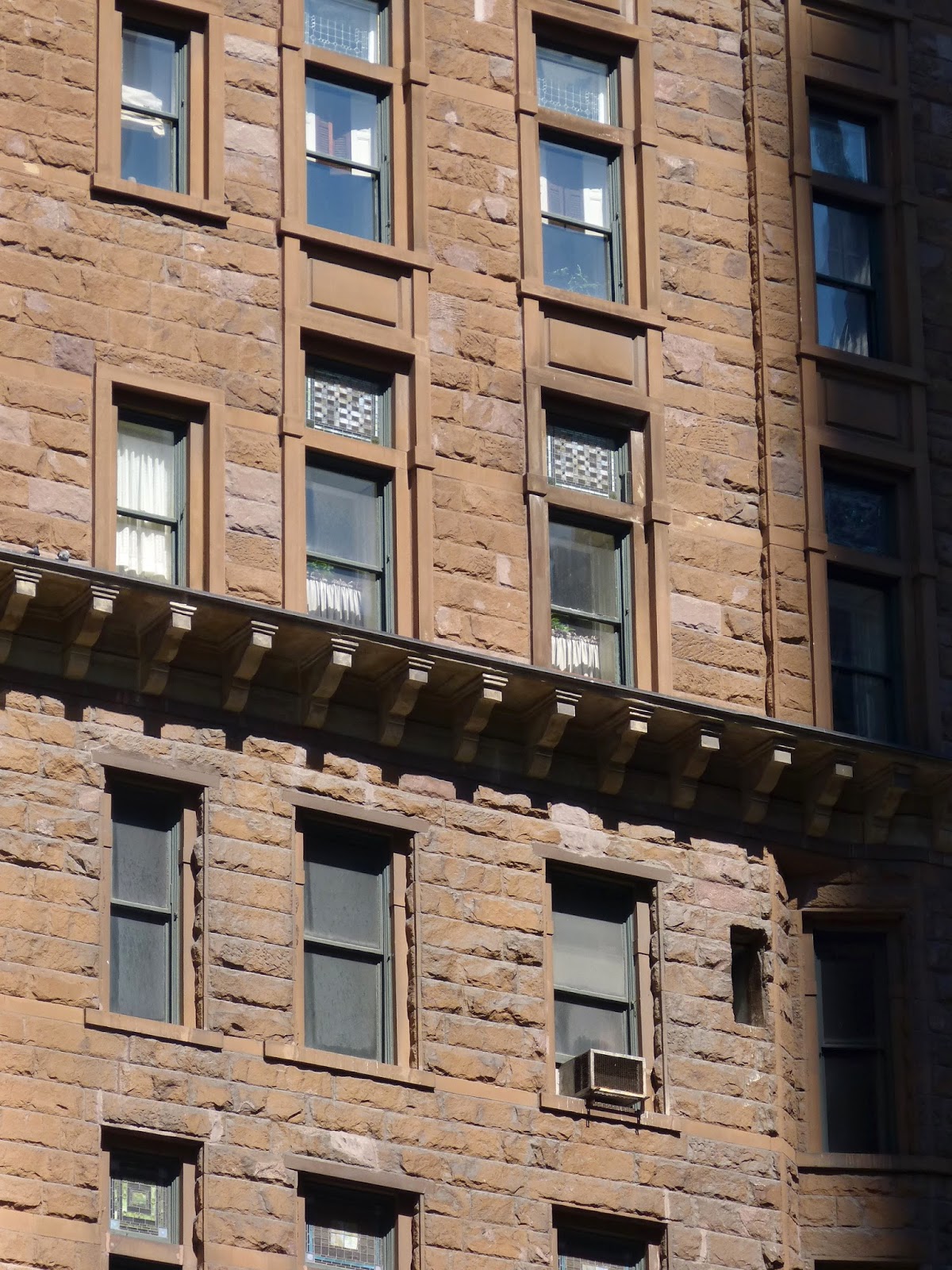 A brown stone building on the opposite corner. 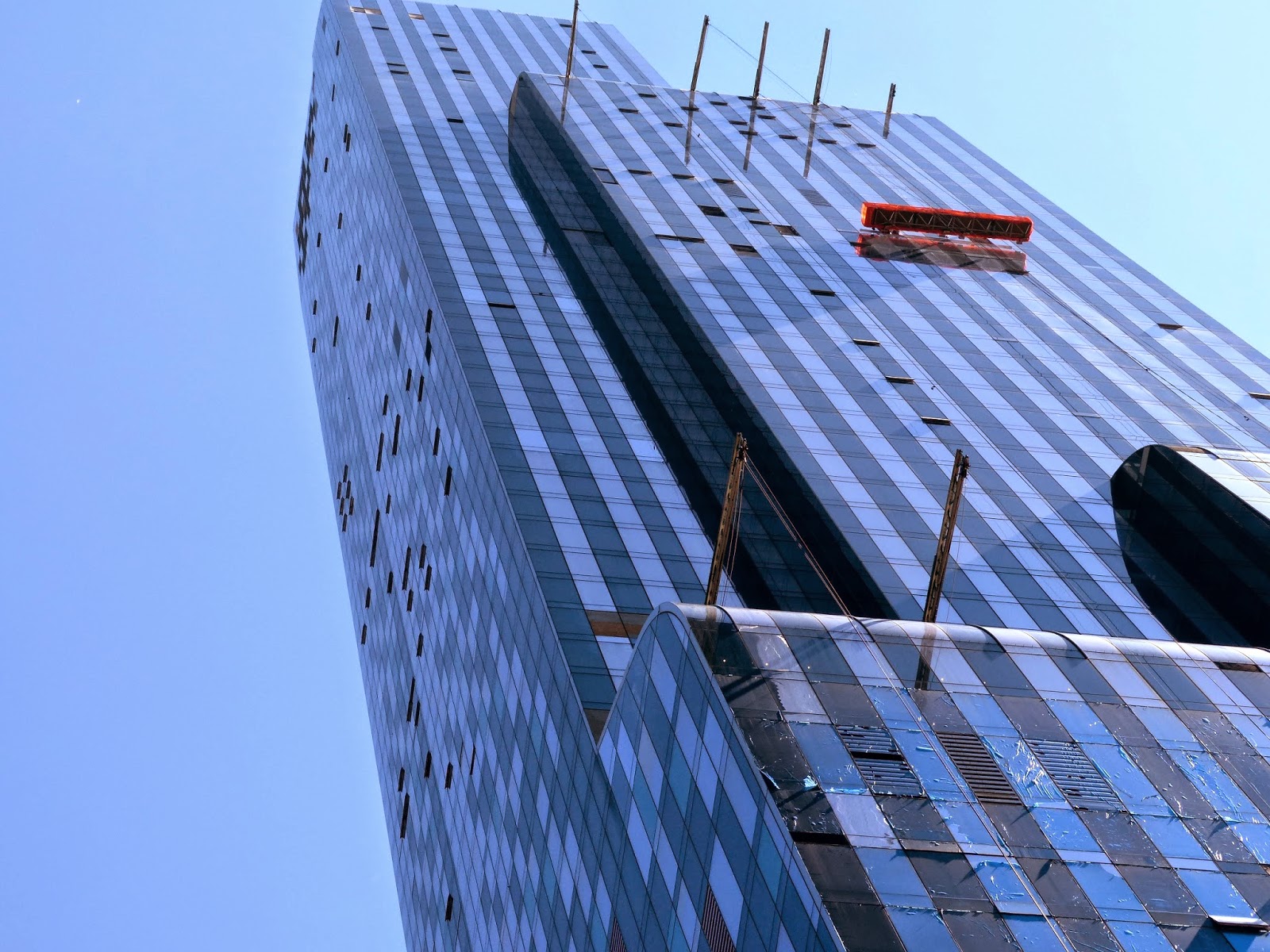 A very tall new building across the road. 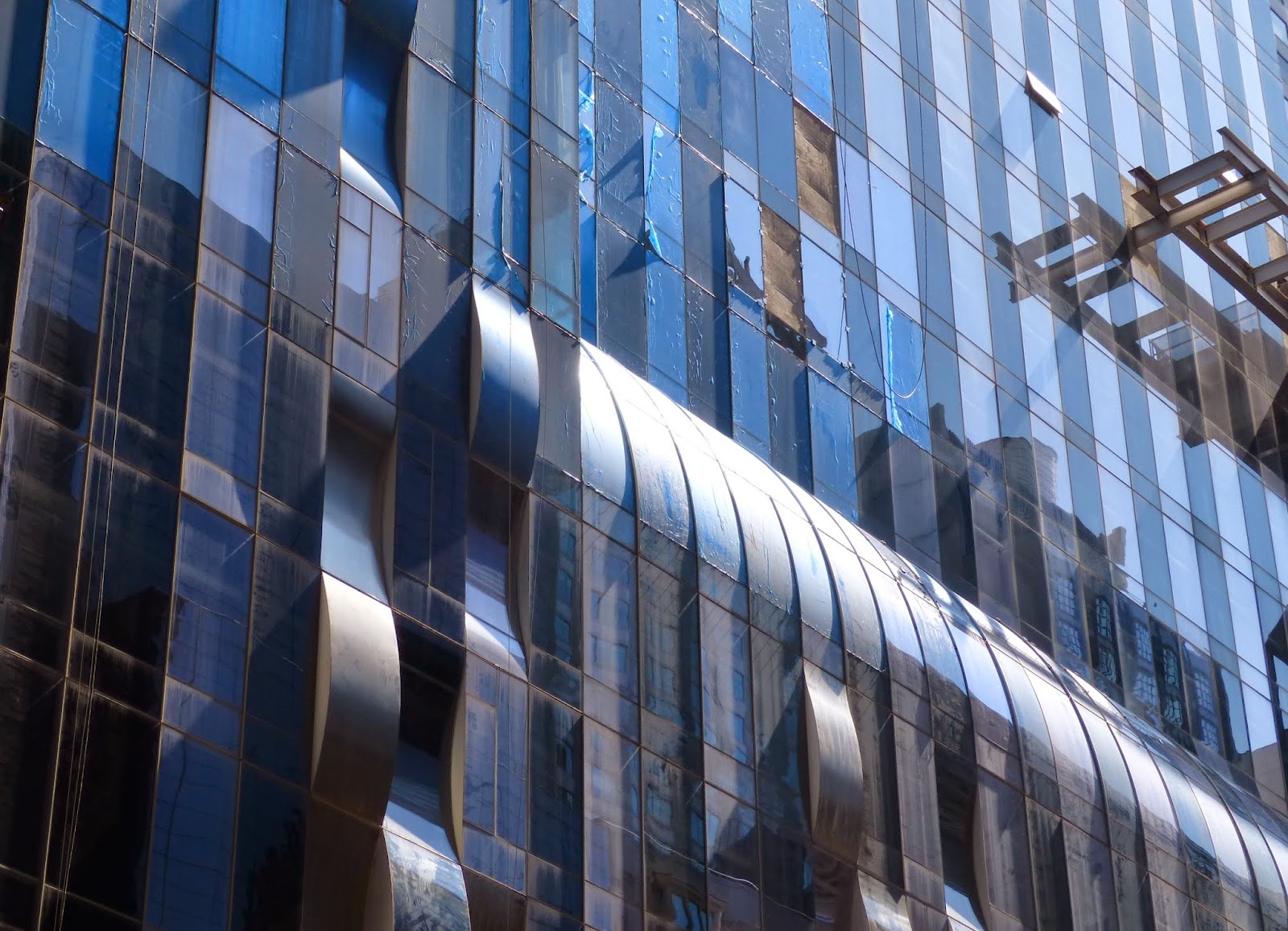 This new building was interesting with these curved windows. 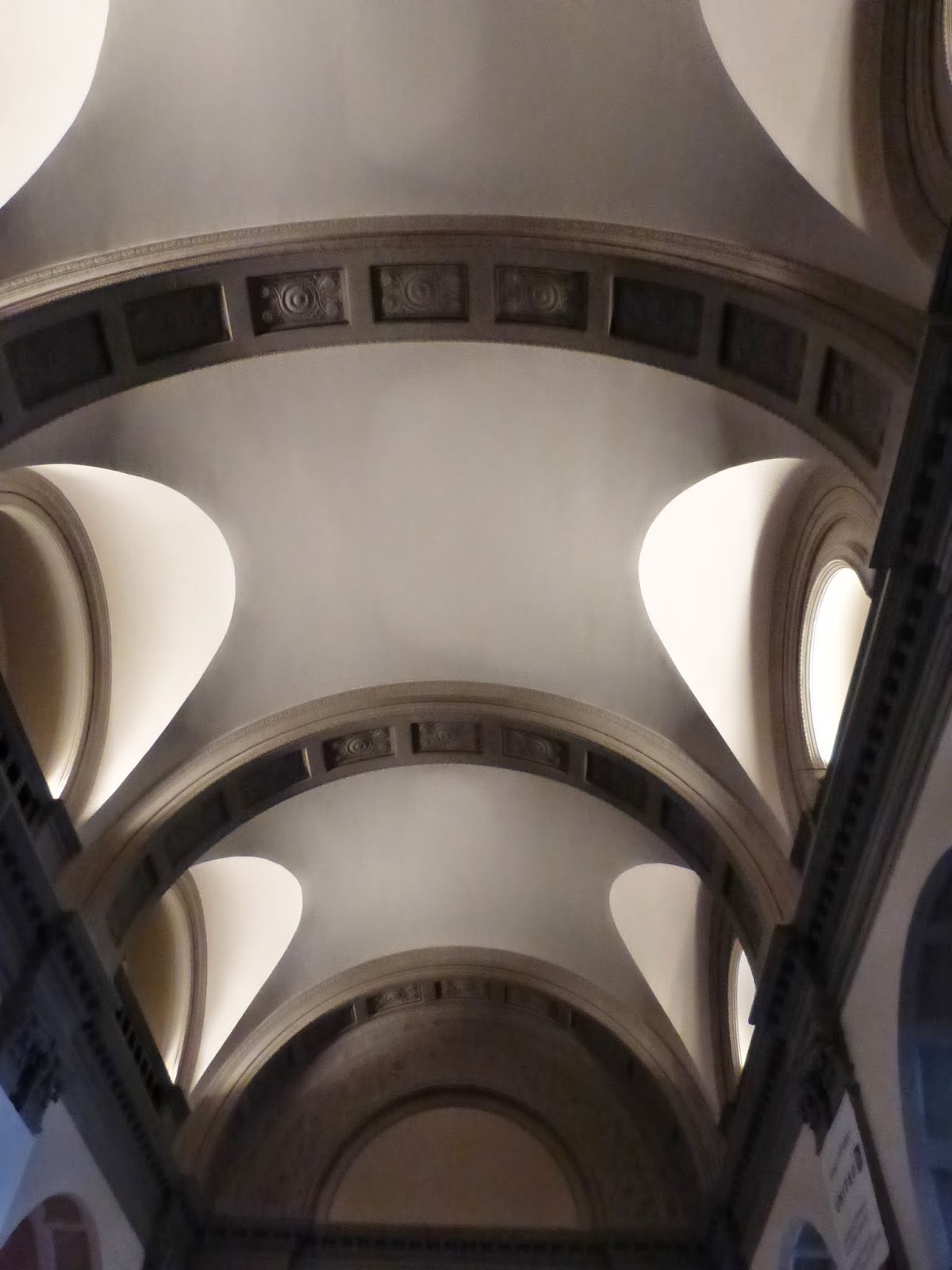 Eventually the door opened and I bought my ticket. ($10 for a senior $15 for adults). I then had to wait another 25 minutes for the tour to start. This is the roof of the lobby. 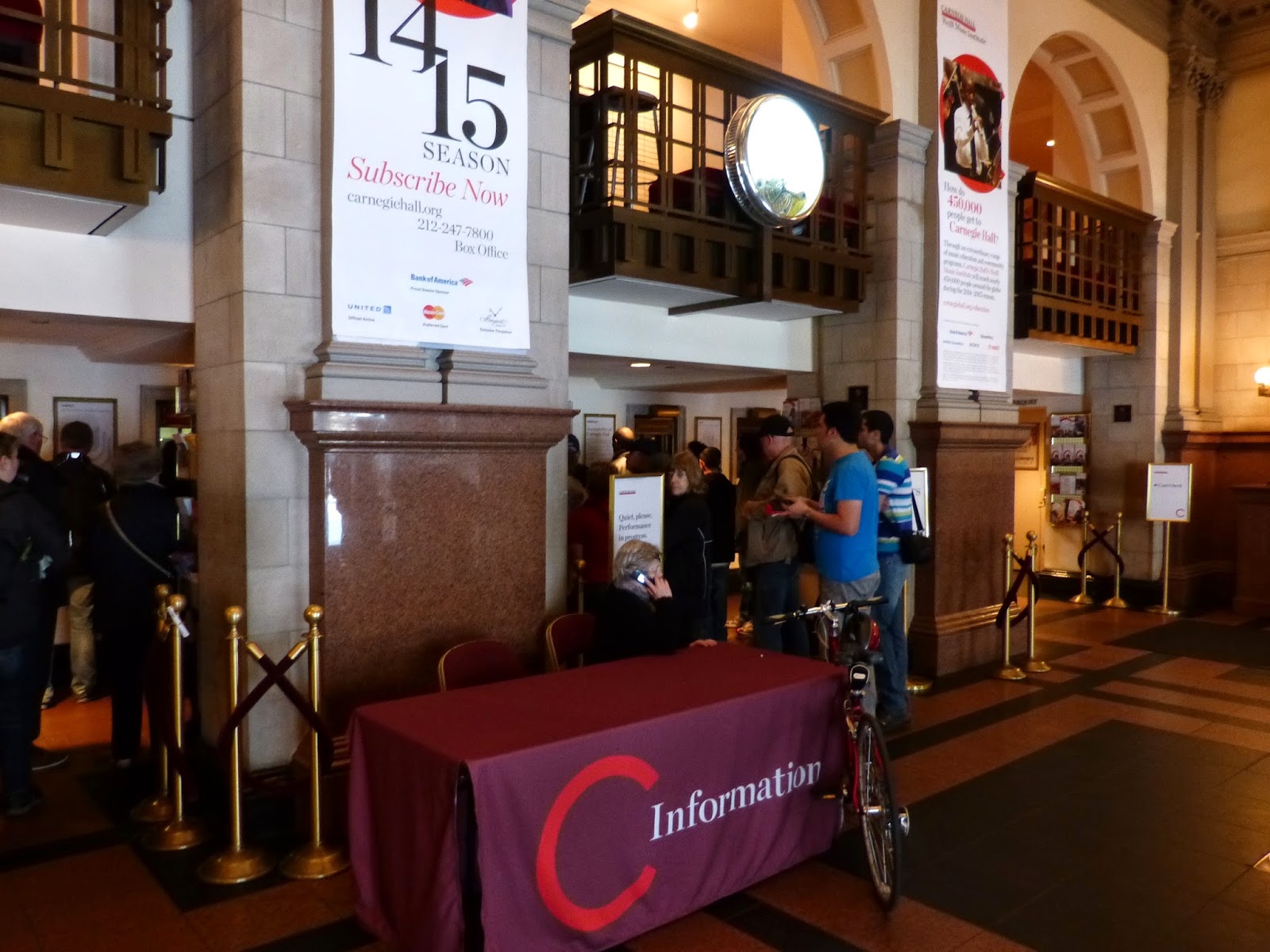 People had been lined up outside to buy $10 rush tickets for that night's performance. By chance, it was the Philadelphia Orchestra playing Bruckner's 9th symphony. I wished I could have gone to see it. 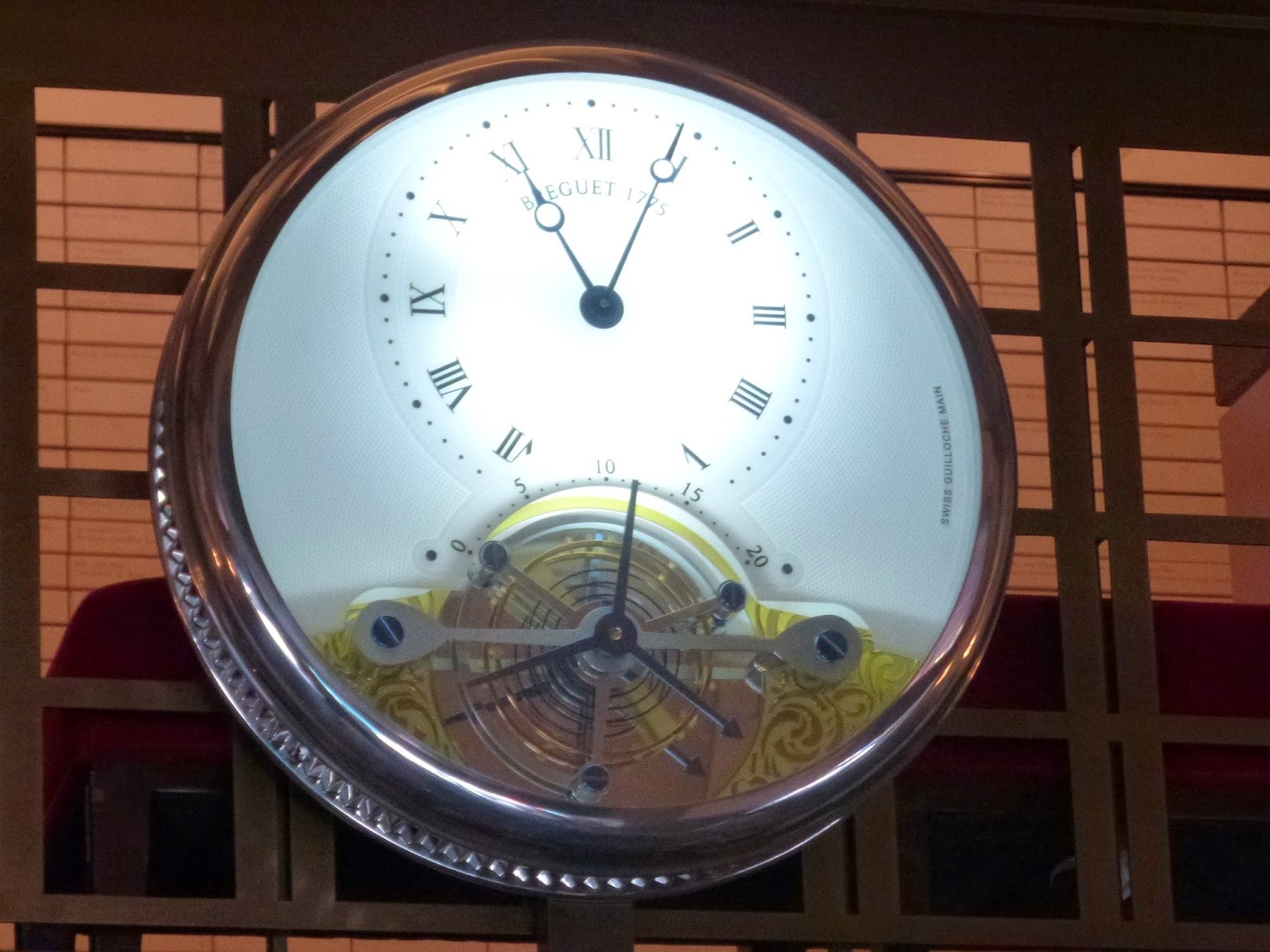 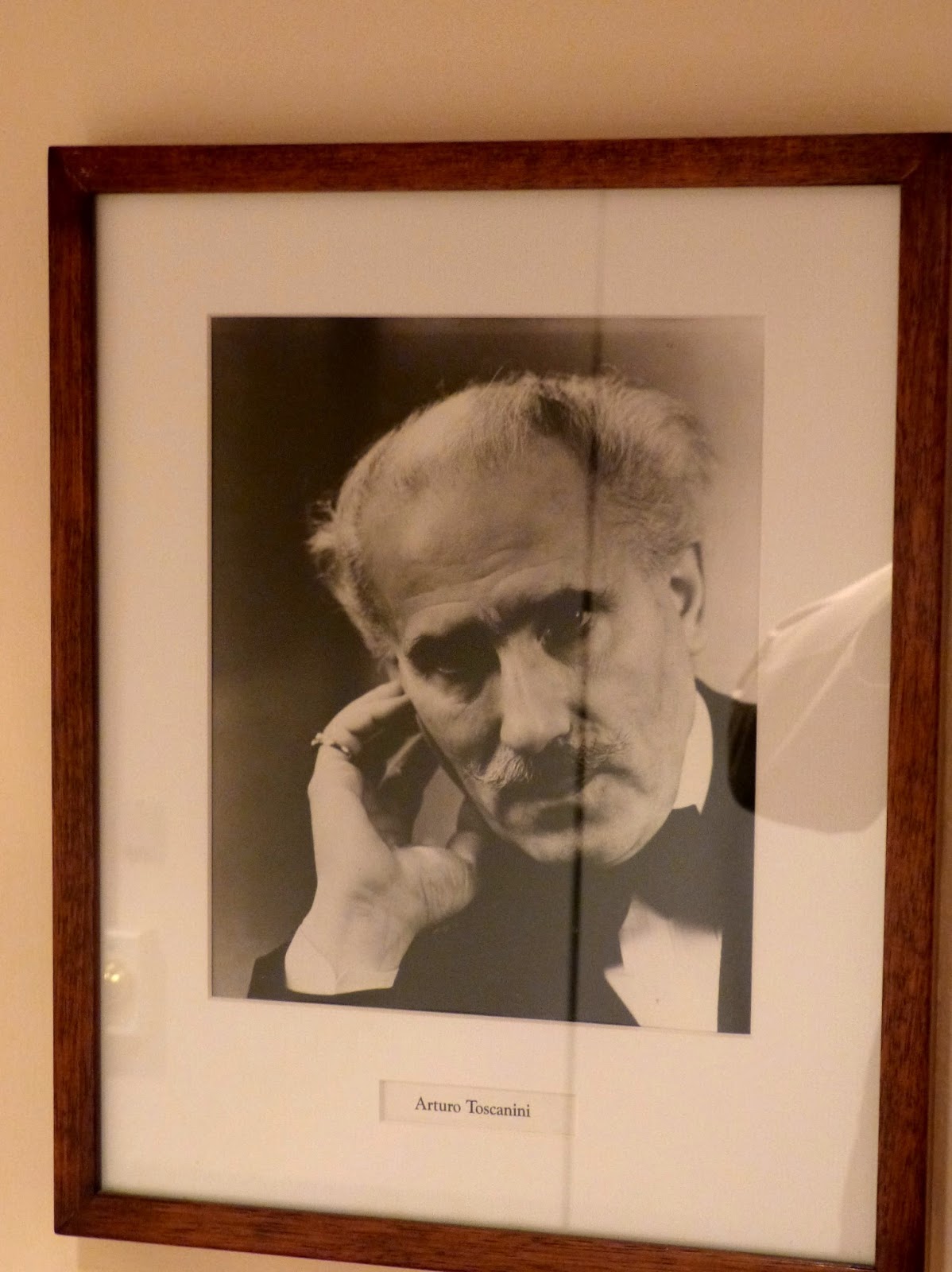 The tour started on time and we were divided into three groups of about 15. Photography is not allowed in the main auditorium but is allowed in most other areas.

Carnegie Hall is one of the most celebrated concert venues in the world. Virtually every famous musician of the last 100 or more years has performed here including the above Toscanini. There are photos everywhere. Most of them are reproductions but their archive unit has the originals. 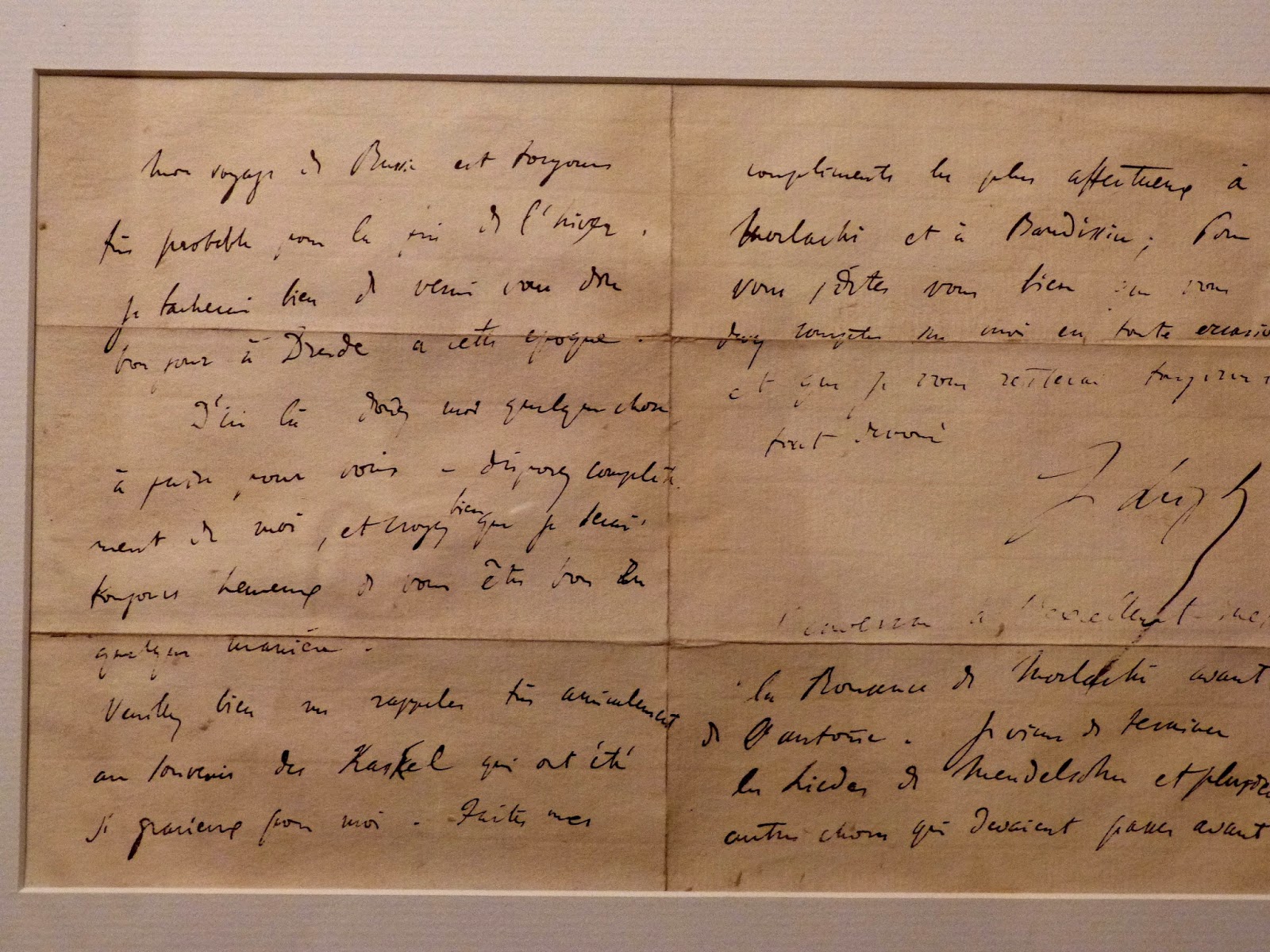 A letter from Liszt. 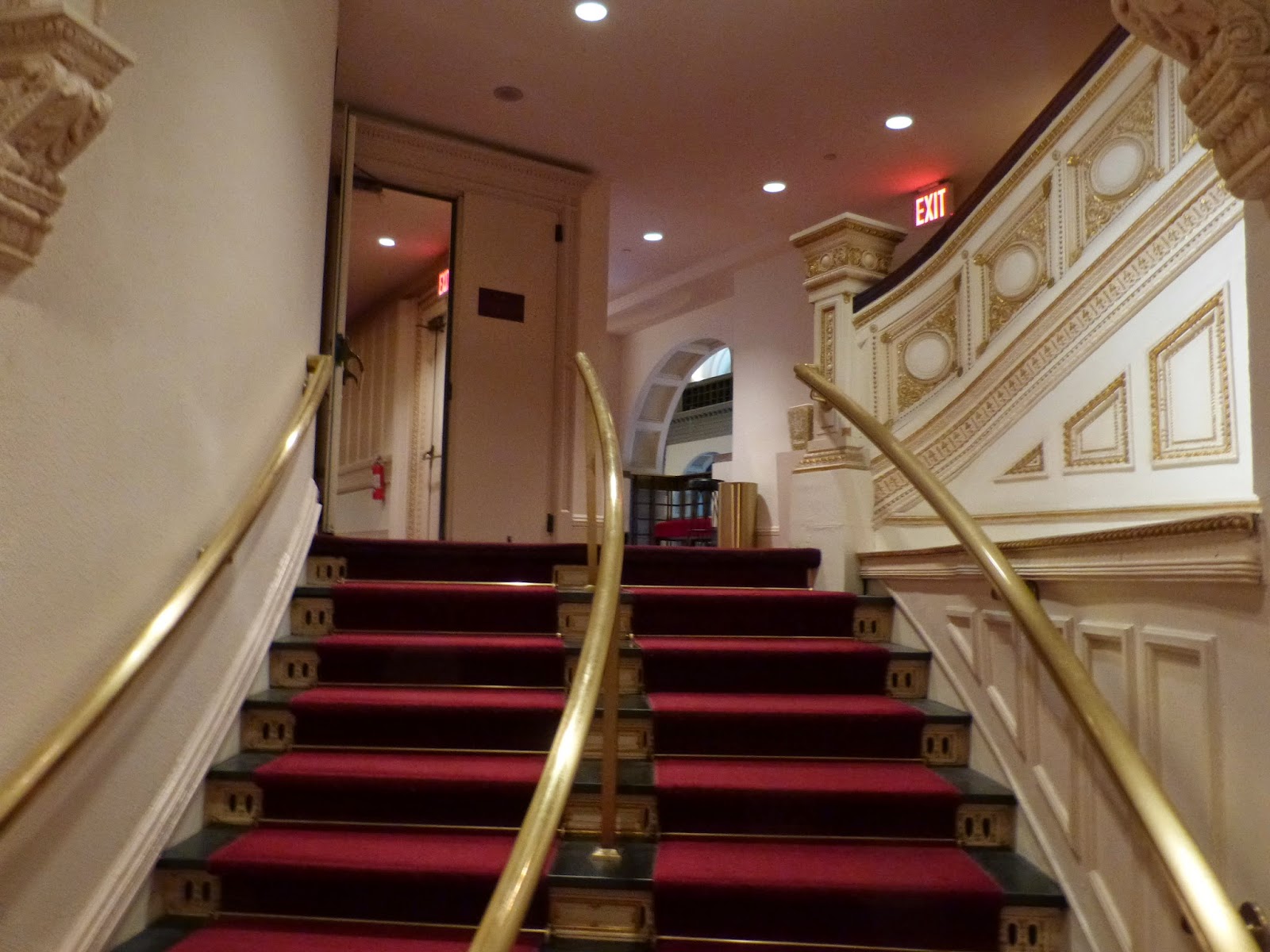 Our guide was very knowledgeable and gave a very good outline or how and why Carnegie built the hall. He also talked about how the hall was saved from the wreckers ball in the 60's by violinist Isaac Stern and renovated in 1986. The best seats are higher up in the hall and it costs at least $25,000 to rent the main auditorium on a Saturday night. 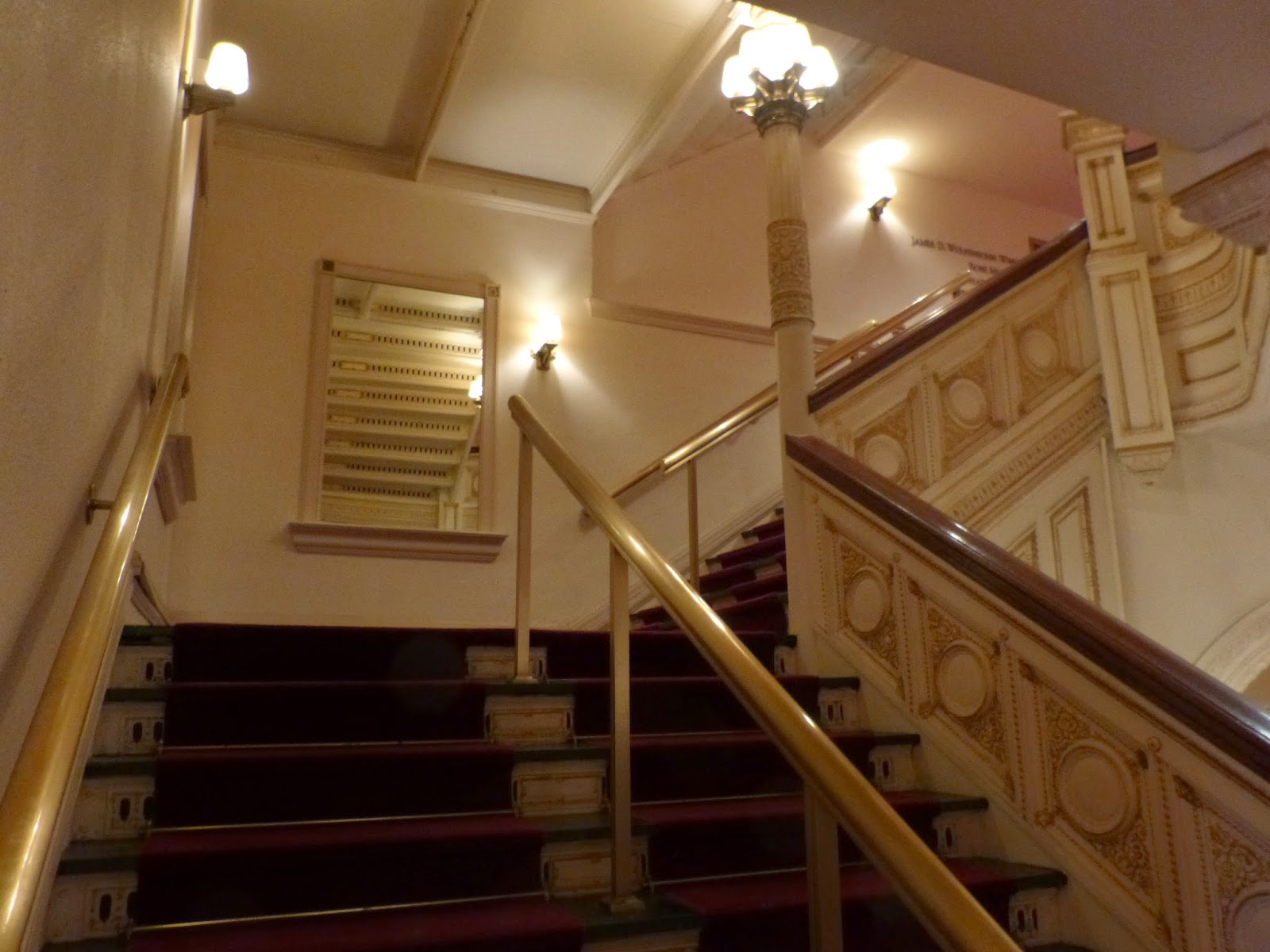 He took us into the main auditorium at balcony and floor levels so that we could all wonder at the magnificence of the hall. It really is elegant and if you have the time, take a look at this official photo of the auditorium. The acoustics are renowned for being superb. 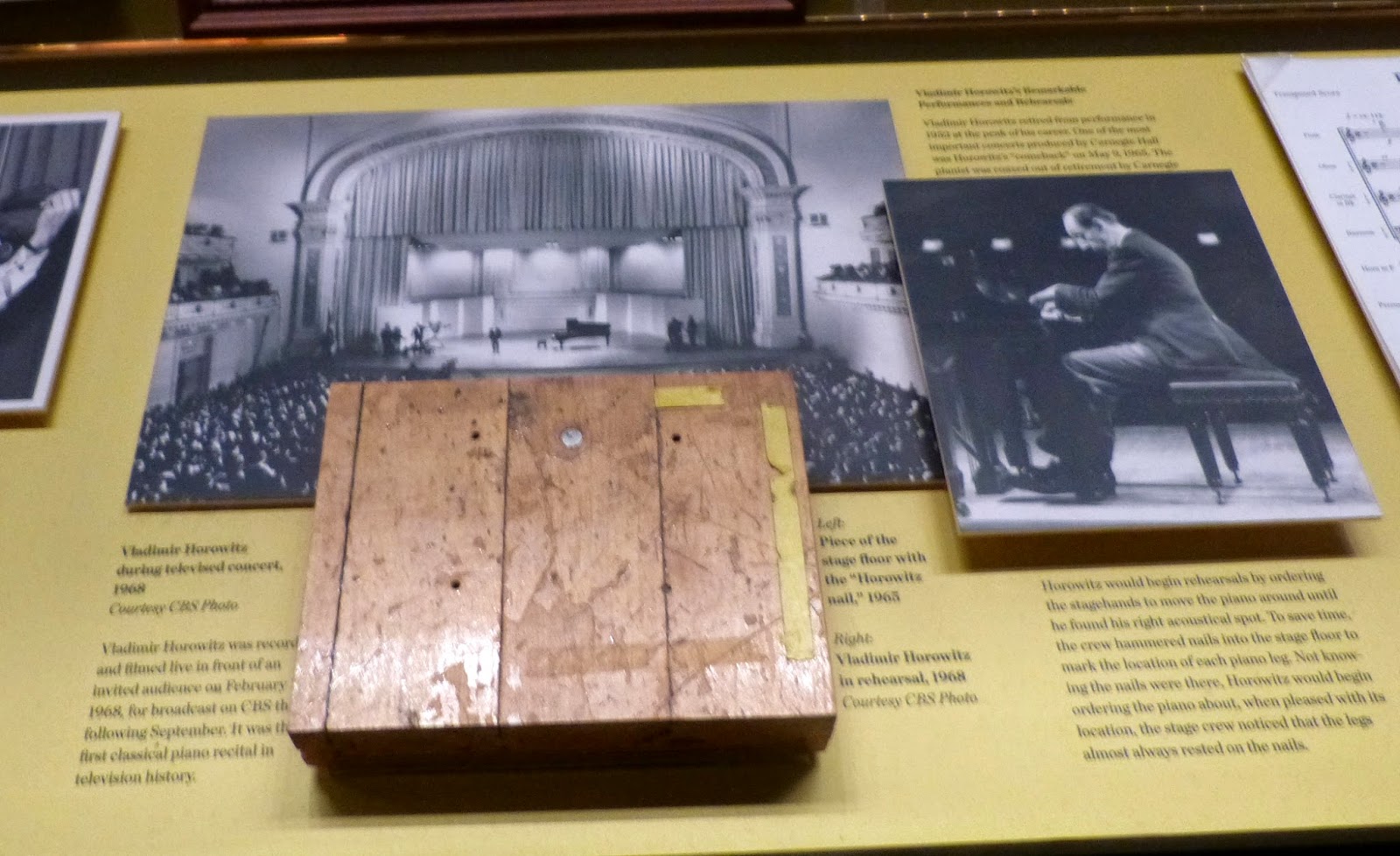 You might see the nail in the piece of wood. There is a story about it which you can read here. Go down to the section 'Consistent Genius'. 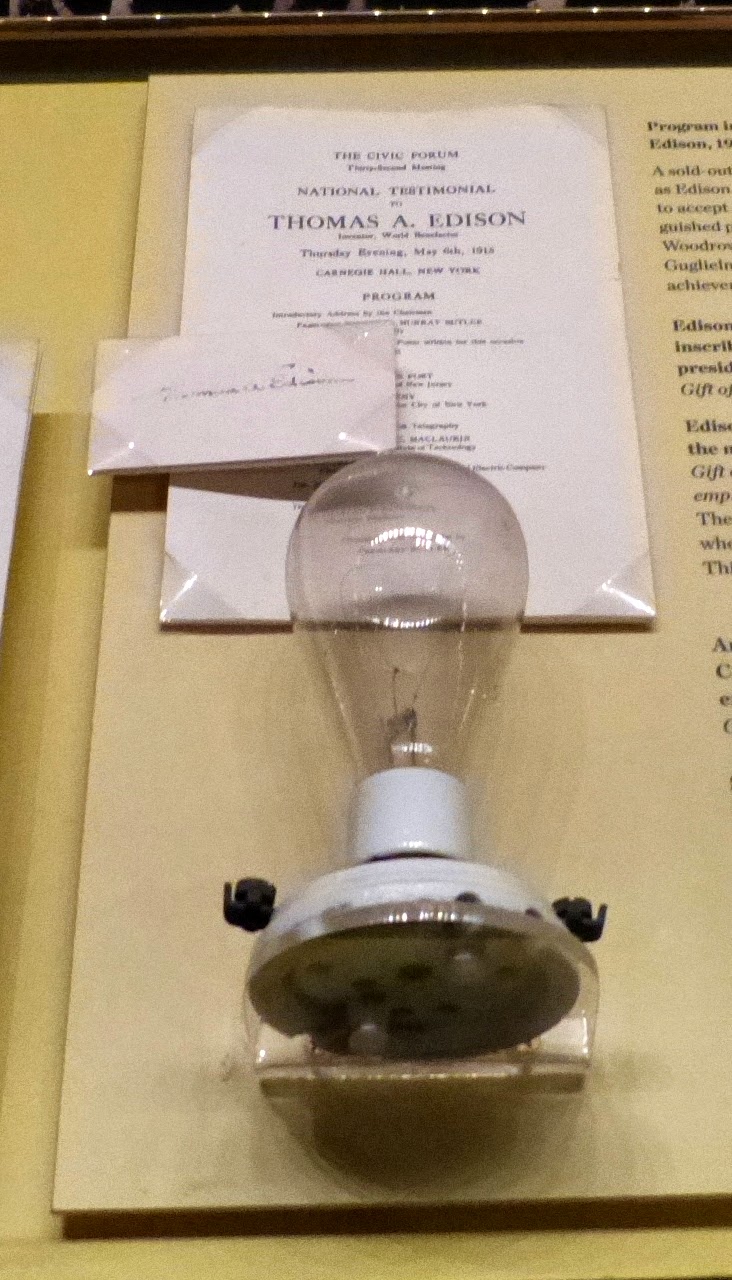 One of the original Edison light bulbs used to light the Auditorium.

I really enjoyed the tour. Obviously I had been sending emails to Marianne about the trials and tribulations of the trip so far and I mentioned that I would go to tour Carnegie Hall. She wrote back something that I really appreciated.

'Ah, I knew you would turn the negative into a positive.'

However, I am now beginning to wonder if the trip is jinxed. After the tour I had a quick lunch at a deli and while I was eating, a news flash came on the TV screen that there had been a derailment on the E subway line I was expecting to use on my way back to the hotel near the airport. Fortunately the A train is an alternative route so that is what I used. I must say that the New York Subway system has the worst signage I have ever experienced in any subway system. Why they don't have TV monitors showing where and when the next train is going and where it is going to stop along the way is beyond me. The rest of the world manages to do this, so why not New York?

By the way, the latest is that the replacement plane also has a mechanical problem which will delay our departure. Another message has come through and the plane will now leave at 23:30. I have to treat that as good news.