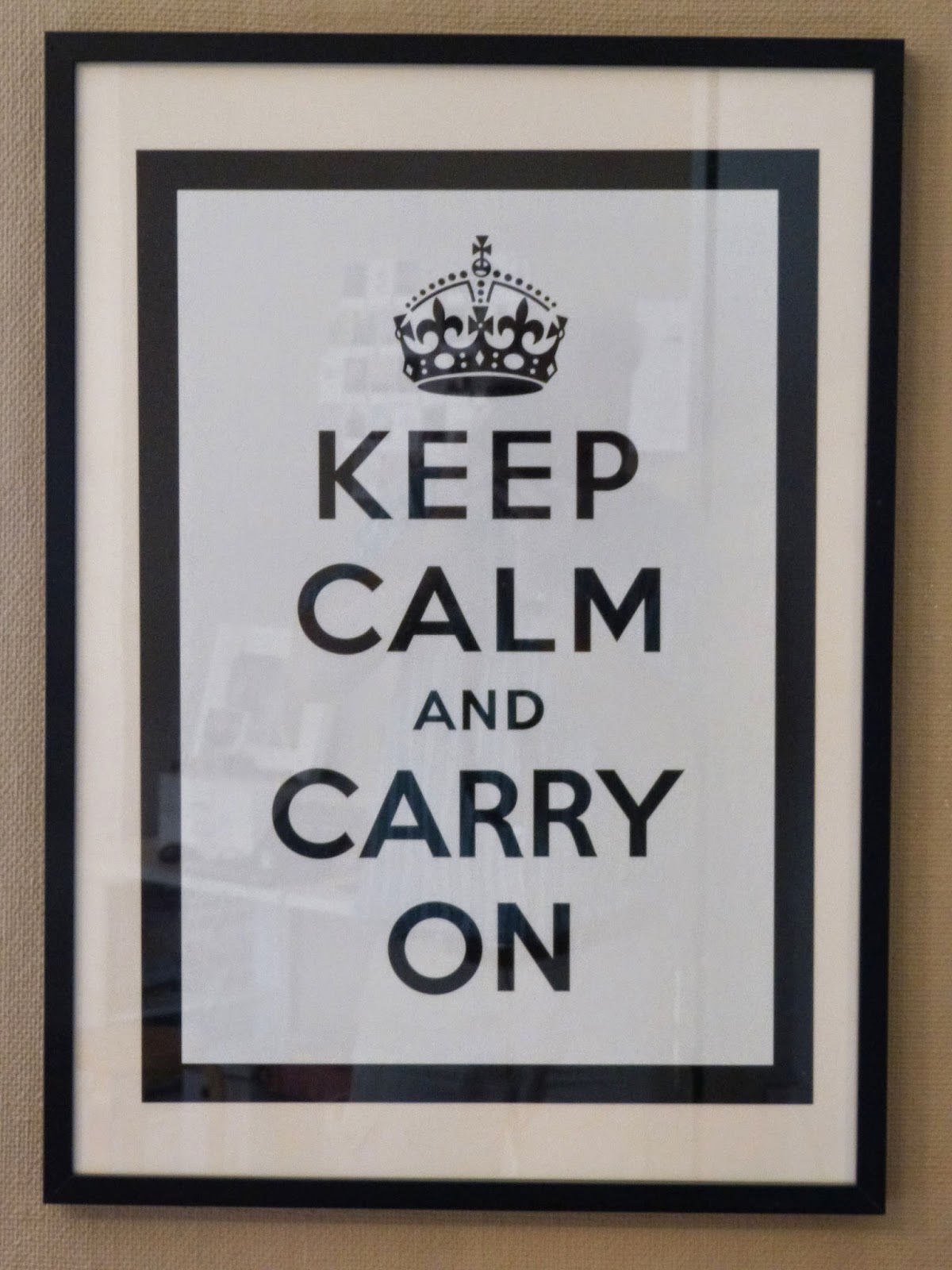 I think this sign on Paula's wall says it all. 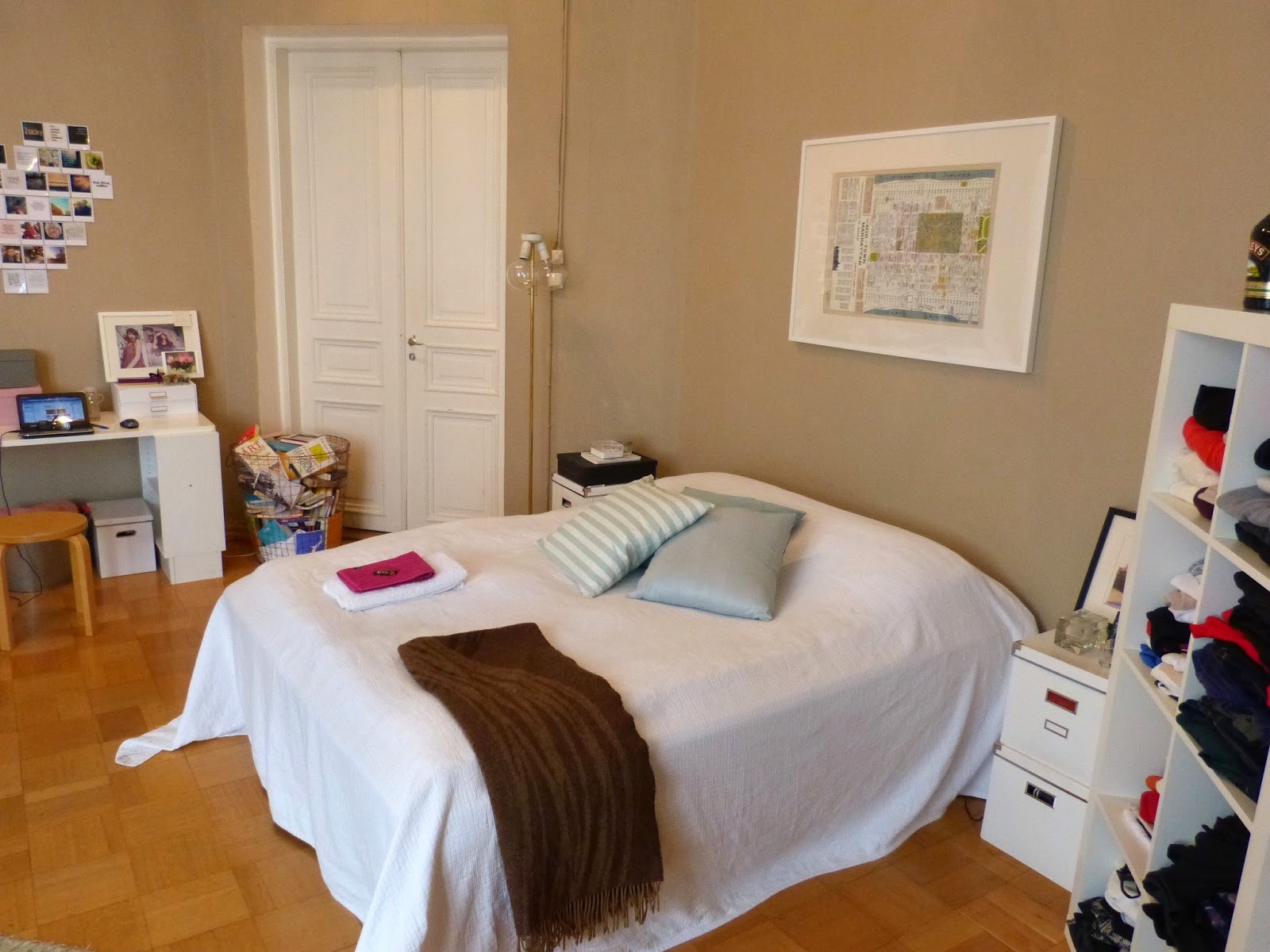 This was Paula's room. There appeared to be about five bedrooms who all shared a common kitchen, and two bathrooms of different sizes. Her room was quite large and very pleasant. It was shaped like a lopped off octagon. 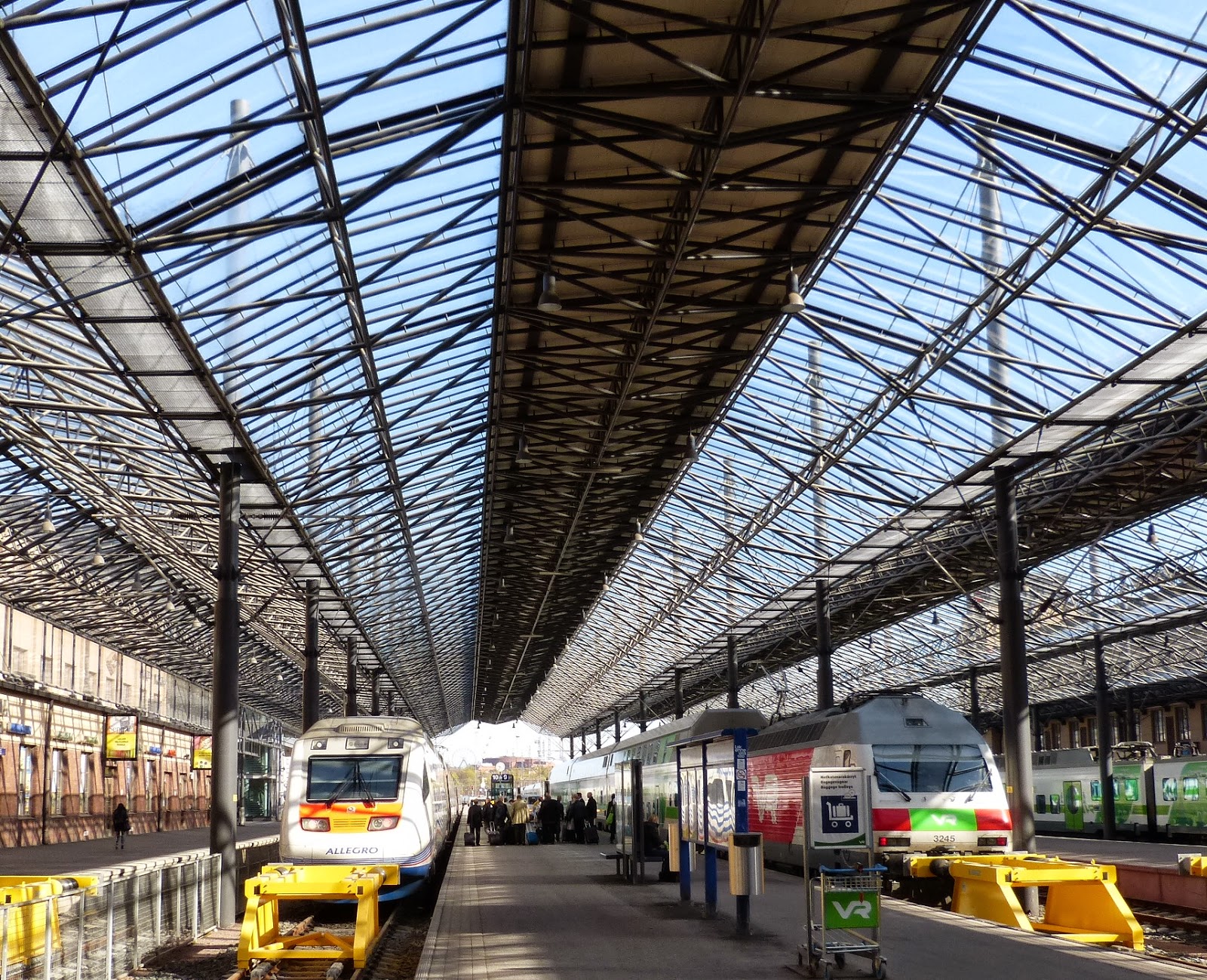 Helsinki station with the Allegro train to St Petersburg on the left. I hopped on about twenty minutes before it was due to depart. 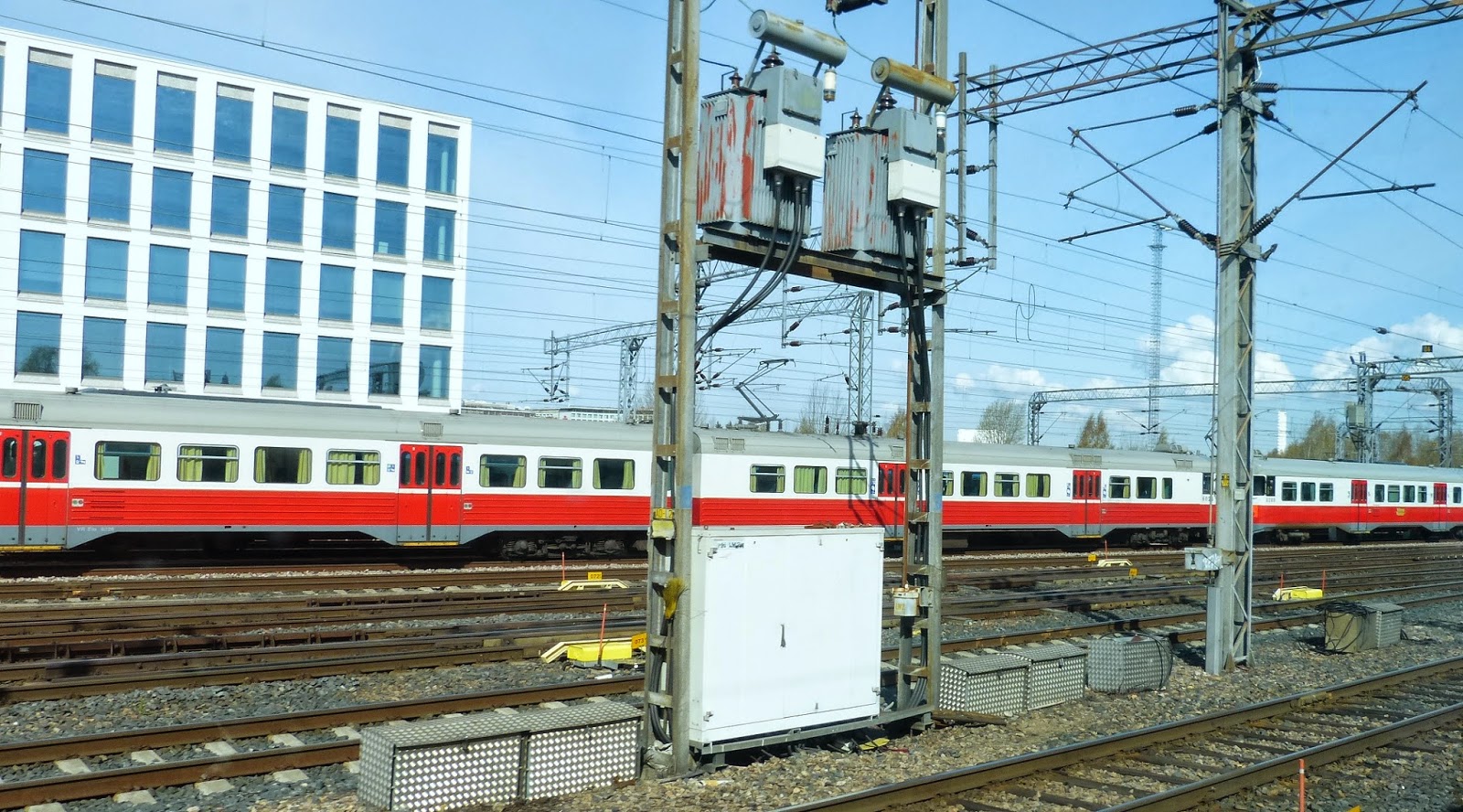 The train set off on time. Since this is a train journey, you get a few train pictures.

Most of the Finnish trains are green with a few red like the prior photo. Those double decker carriages are really tall.

Just to show some green leaves as the train headed out of Helsinki. 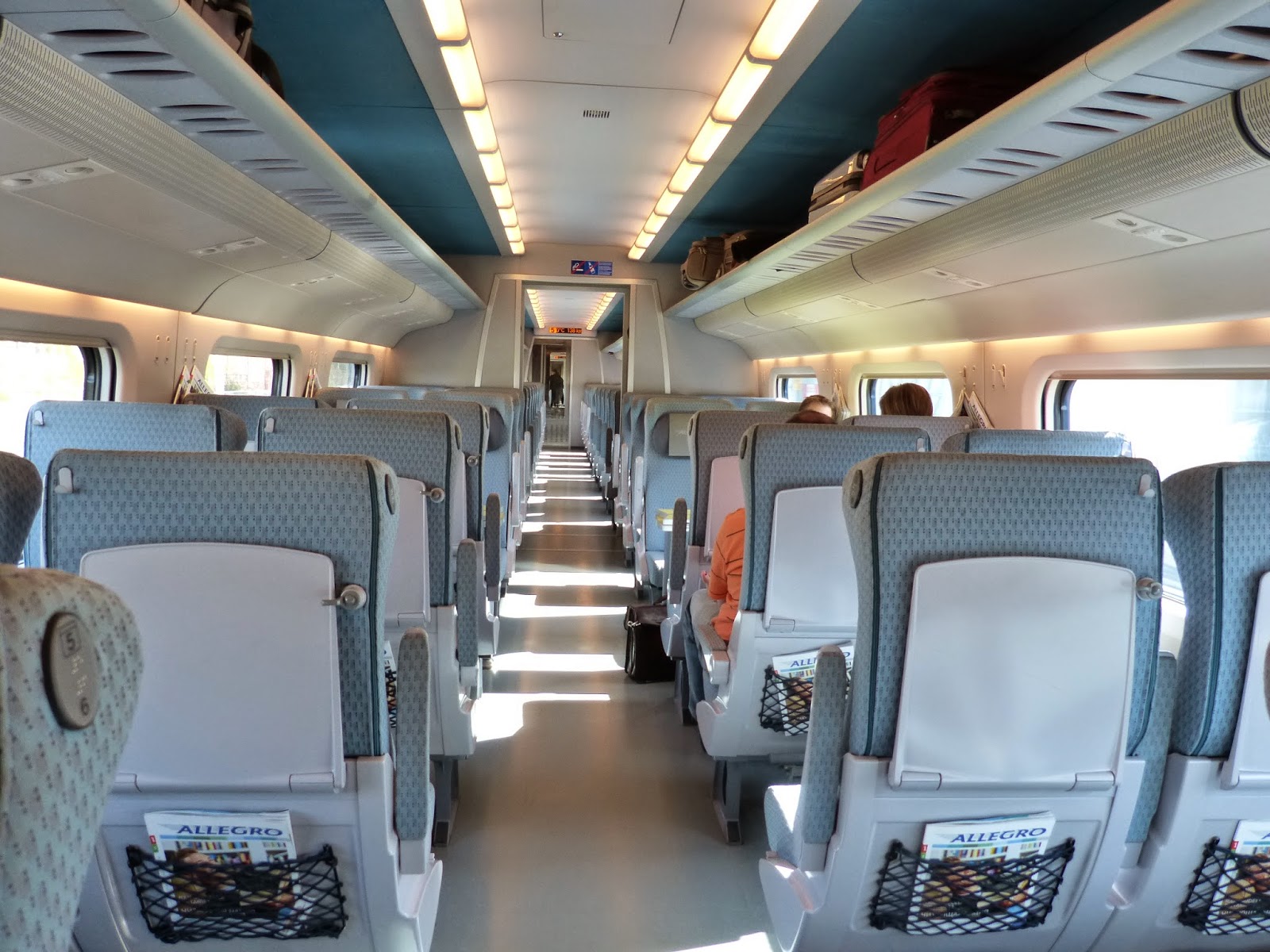 My carriage. There were not too many people on board though some additional passengers got on later. It was quite comfortable and had internet. 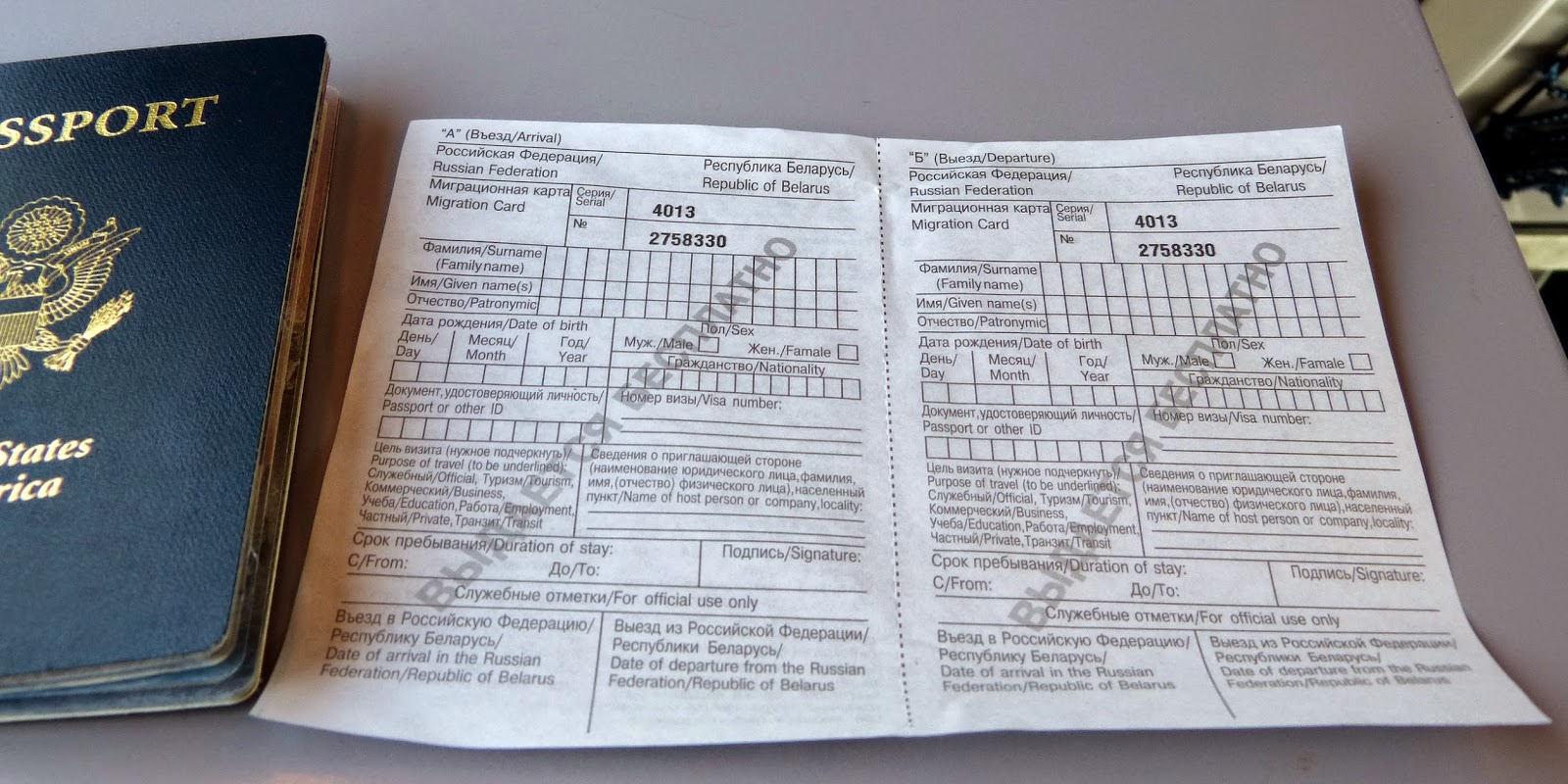 The conductor handed me this Russian Immigration form to fill out. 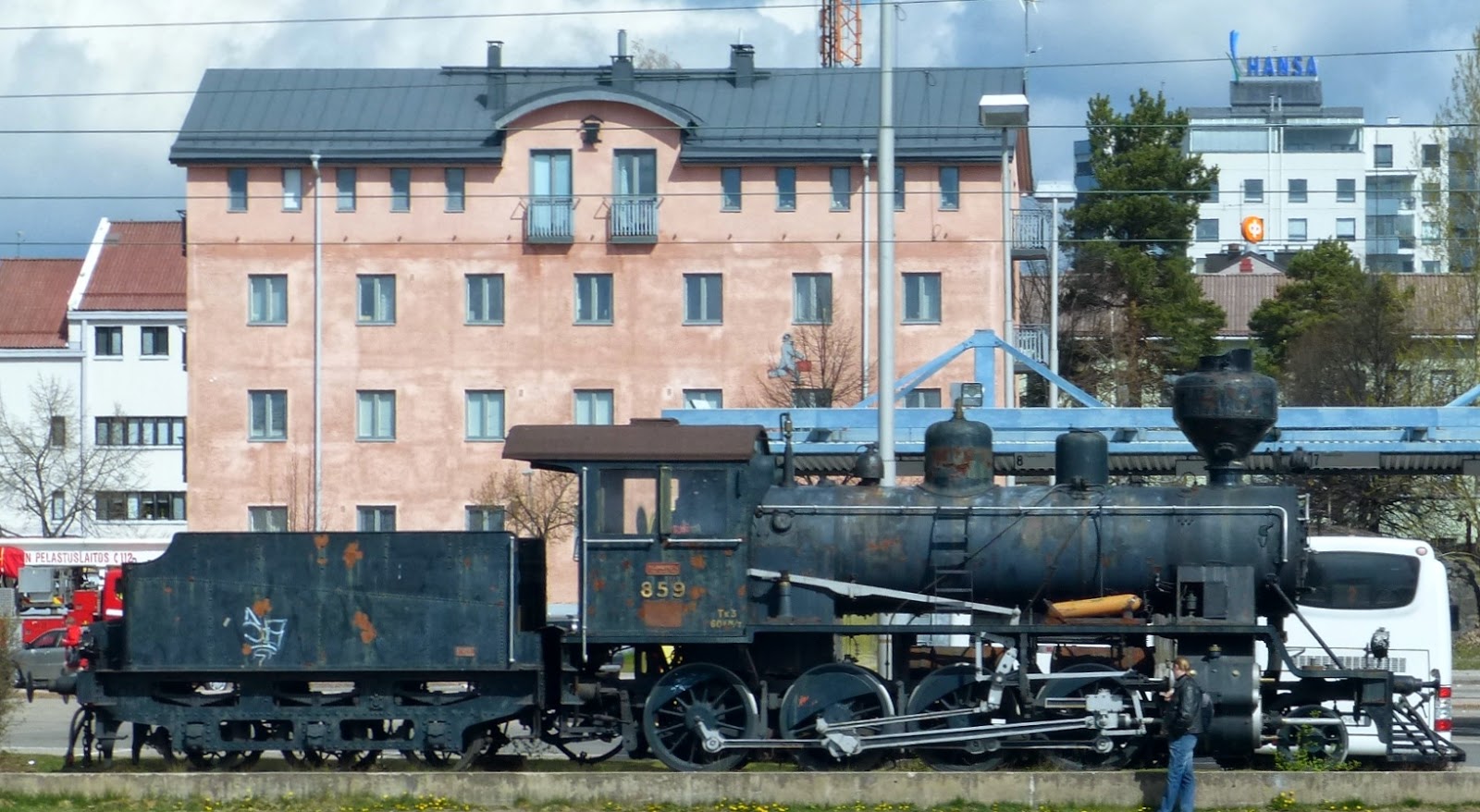 I just happened to snap this photo at Kouvola without realizing the group on the right are Finnish Immigration officials. They inspected passports for leaving Finland. 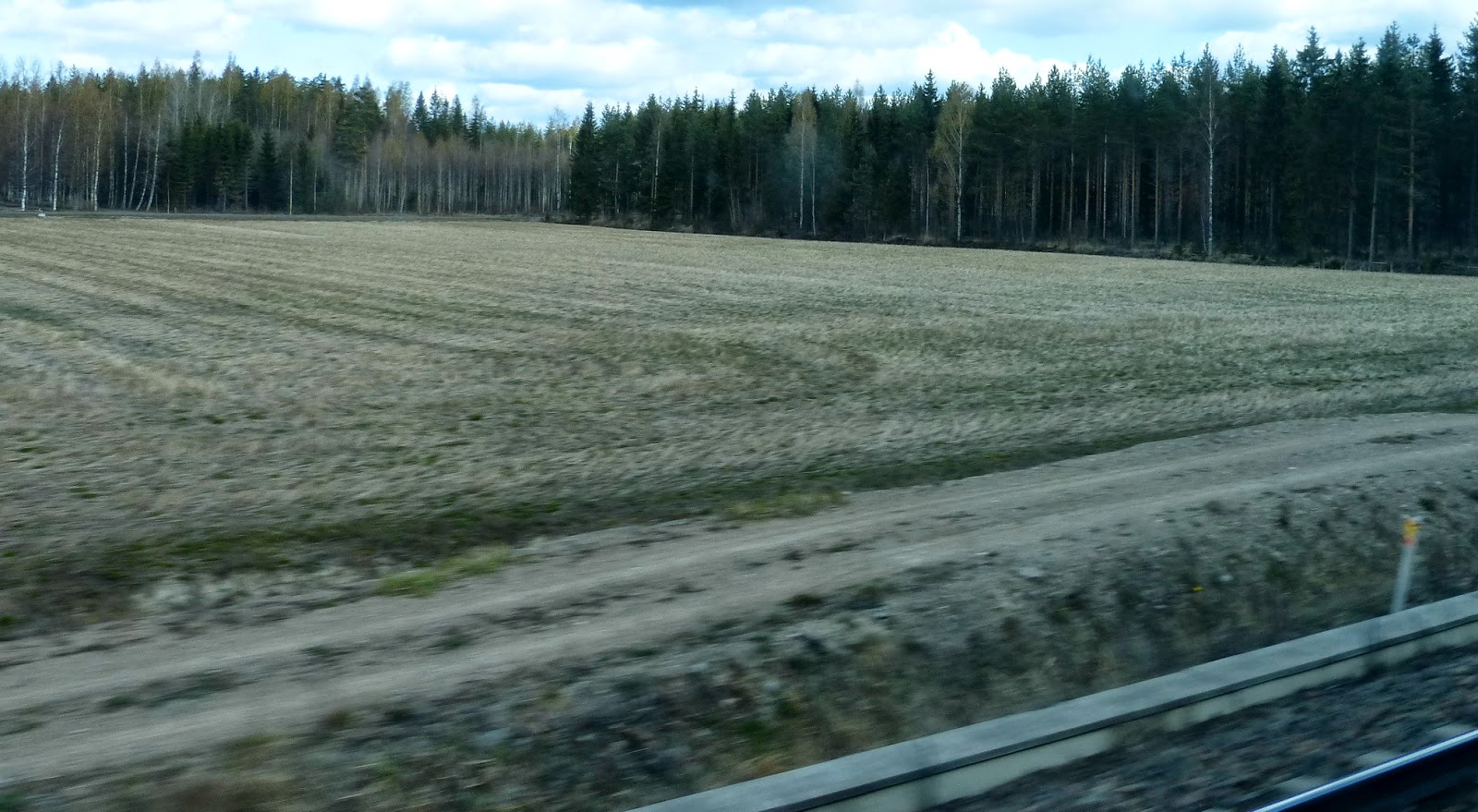 The scenery was not too exciting. Some fields, some trees, more fields, more trees. 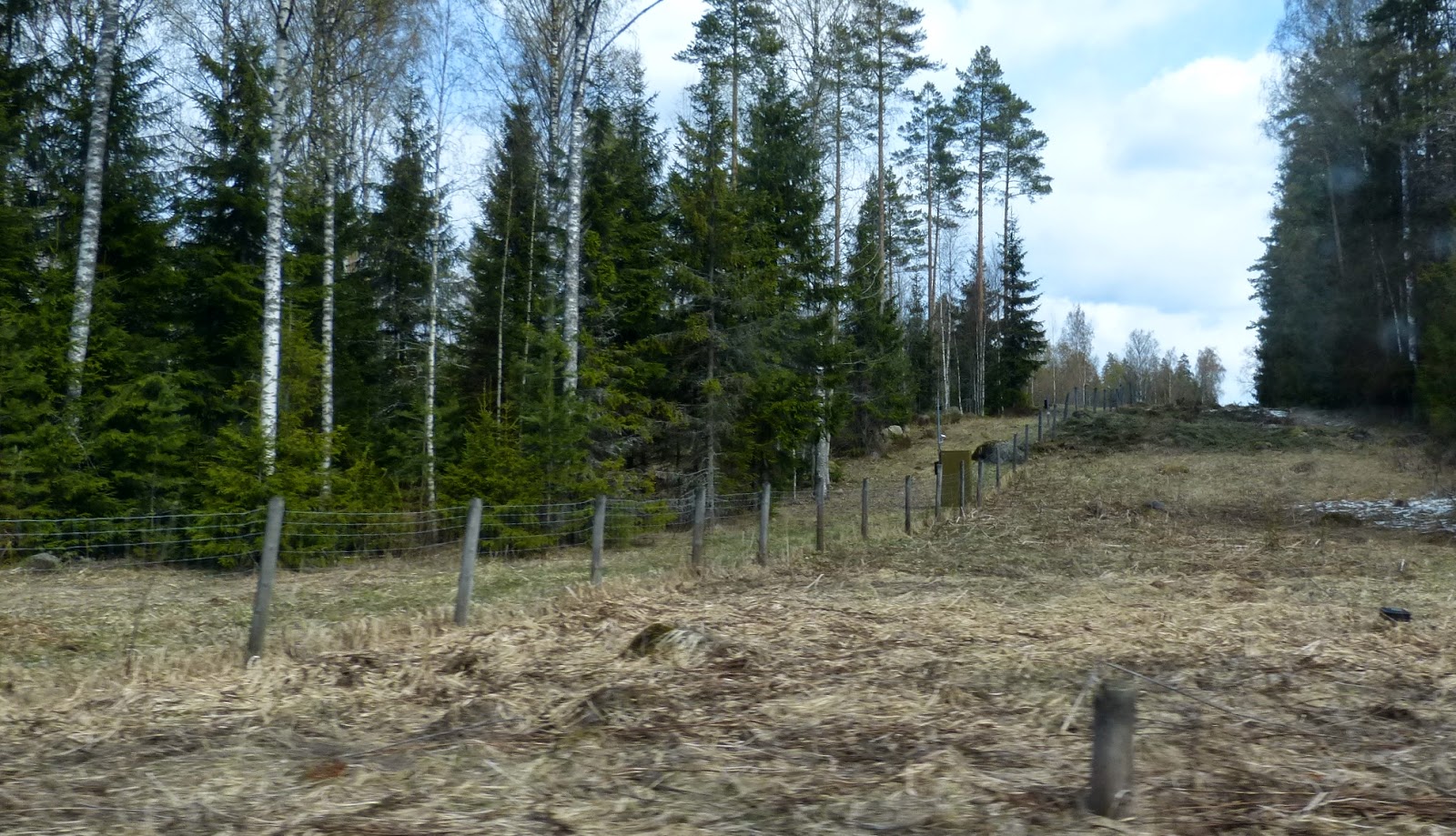 Eventually we came to the border. I think this is the actually border fence. Believe me, there was much more in the way of fences and barbwire than this. Discretion overcame valour and this was the only photo I took at the border.

The Russian Immigration and Customs came around and believe it or not, the one who inspected my passport was a good looking blonde woman. She duly inspected the visa and my immigration form, recorded information from my passport with some electronic device, stamped my passport and form and gave me back half of the form that I need to keep with my passport until I leave Russia.

I think she liked me. 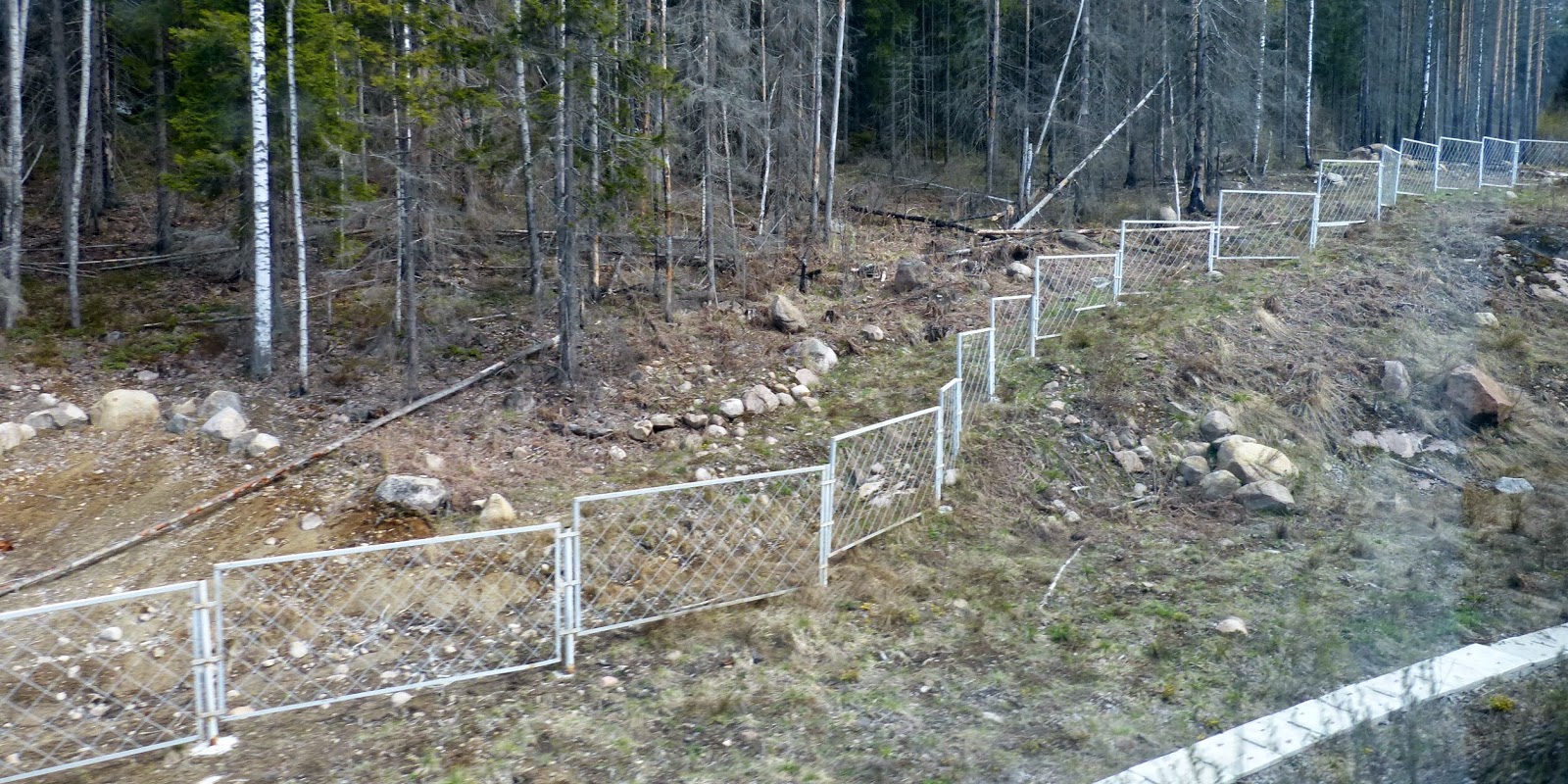 This fence extends all the way from the border to St Petersburg except in built-up areas. Presumably it is to keep animals off the line. Hitting a moose at high speed would be 'interesting'.

It was a great relief to actually be in Russia without any problem.

We crossed a large river that fed into Vyborg Bay just to the west of Vyborg. I see Wikipedia says this town used to be part of Finland but was ceded to Russia in 1944. 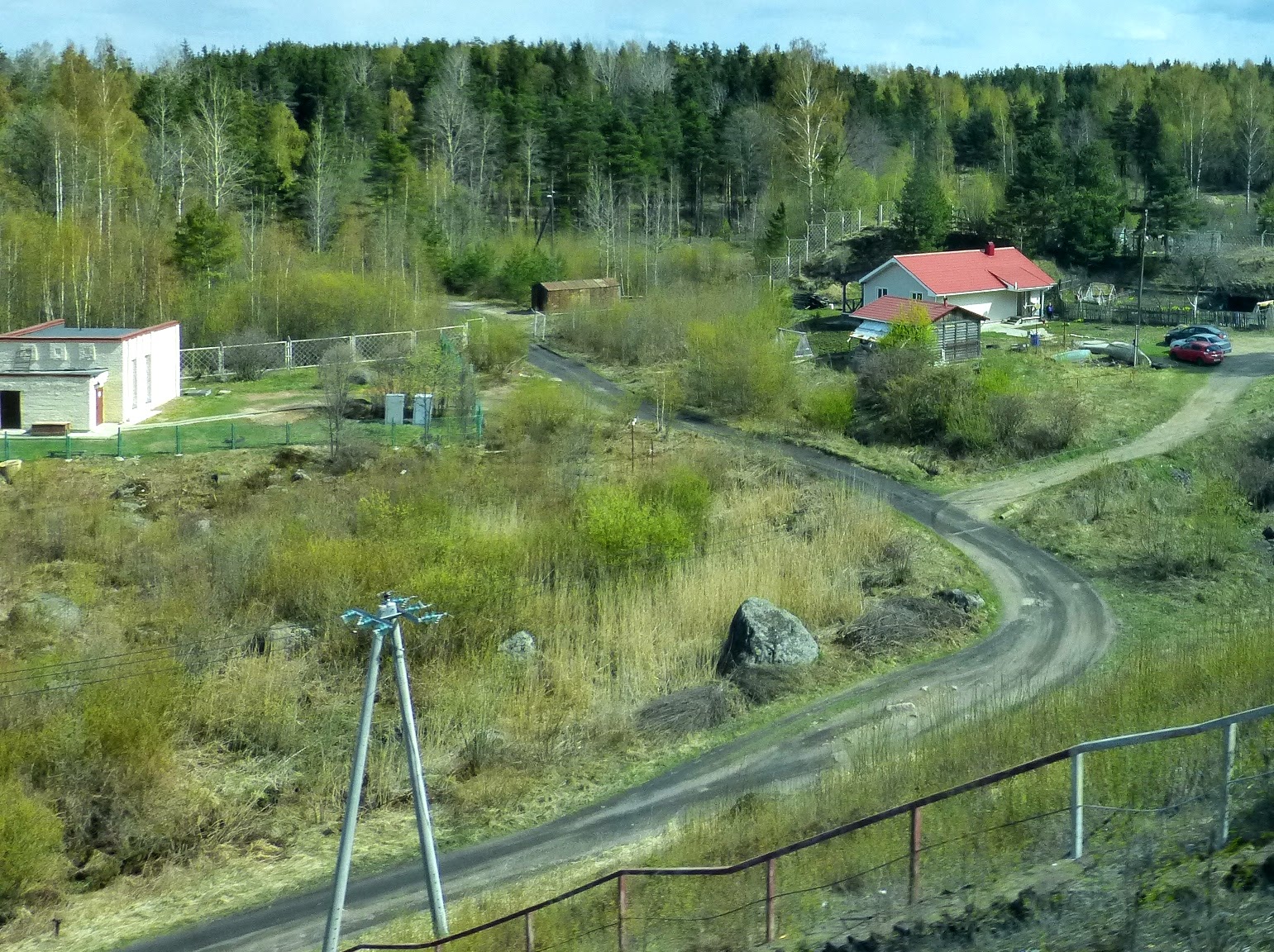 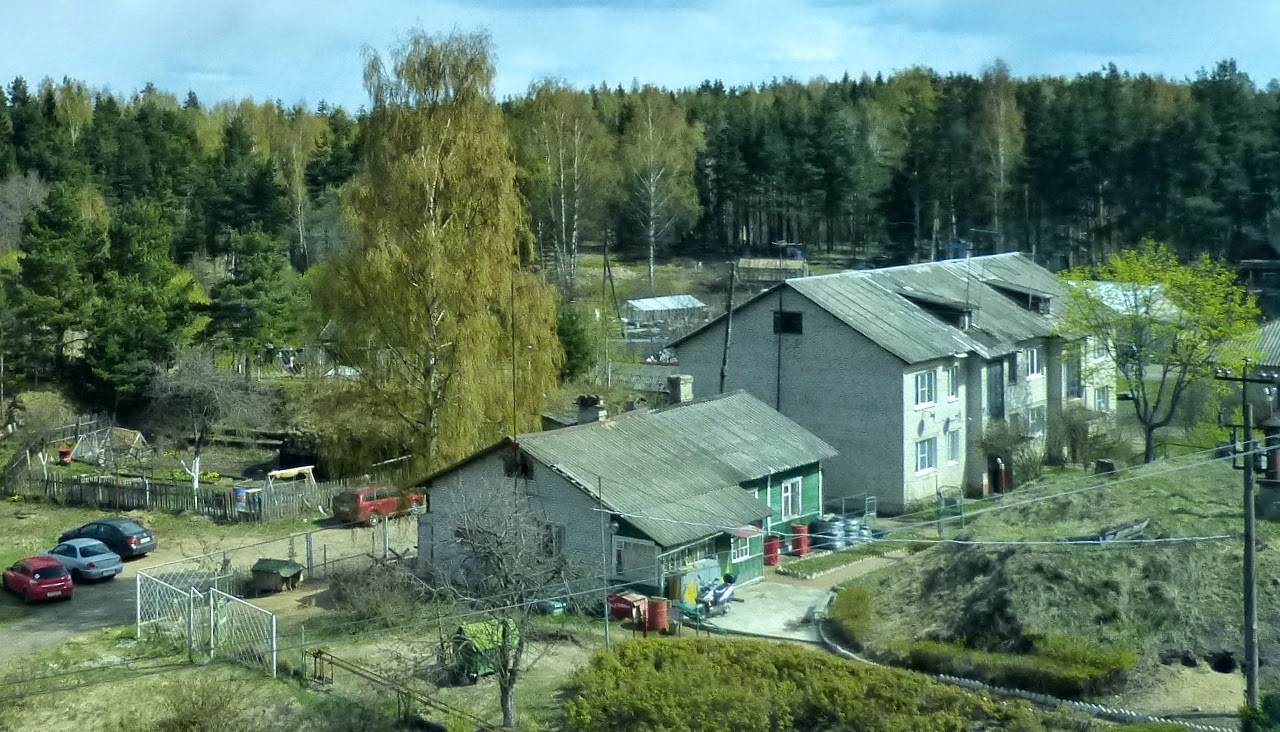 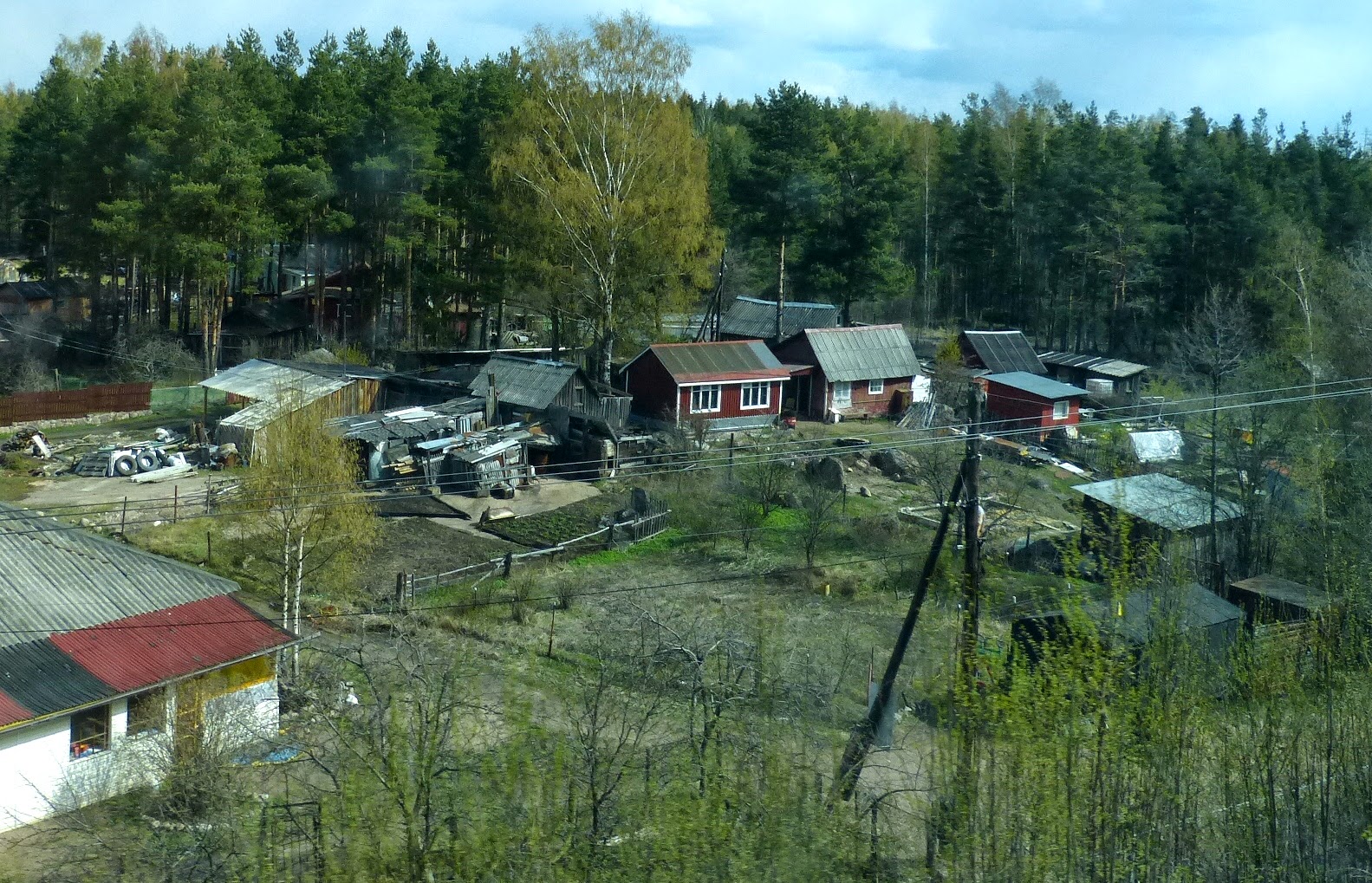 The houses are much more idiosyncratic in Russia than Scandinavia. Most seem to be made of wood. 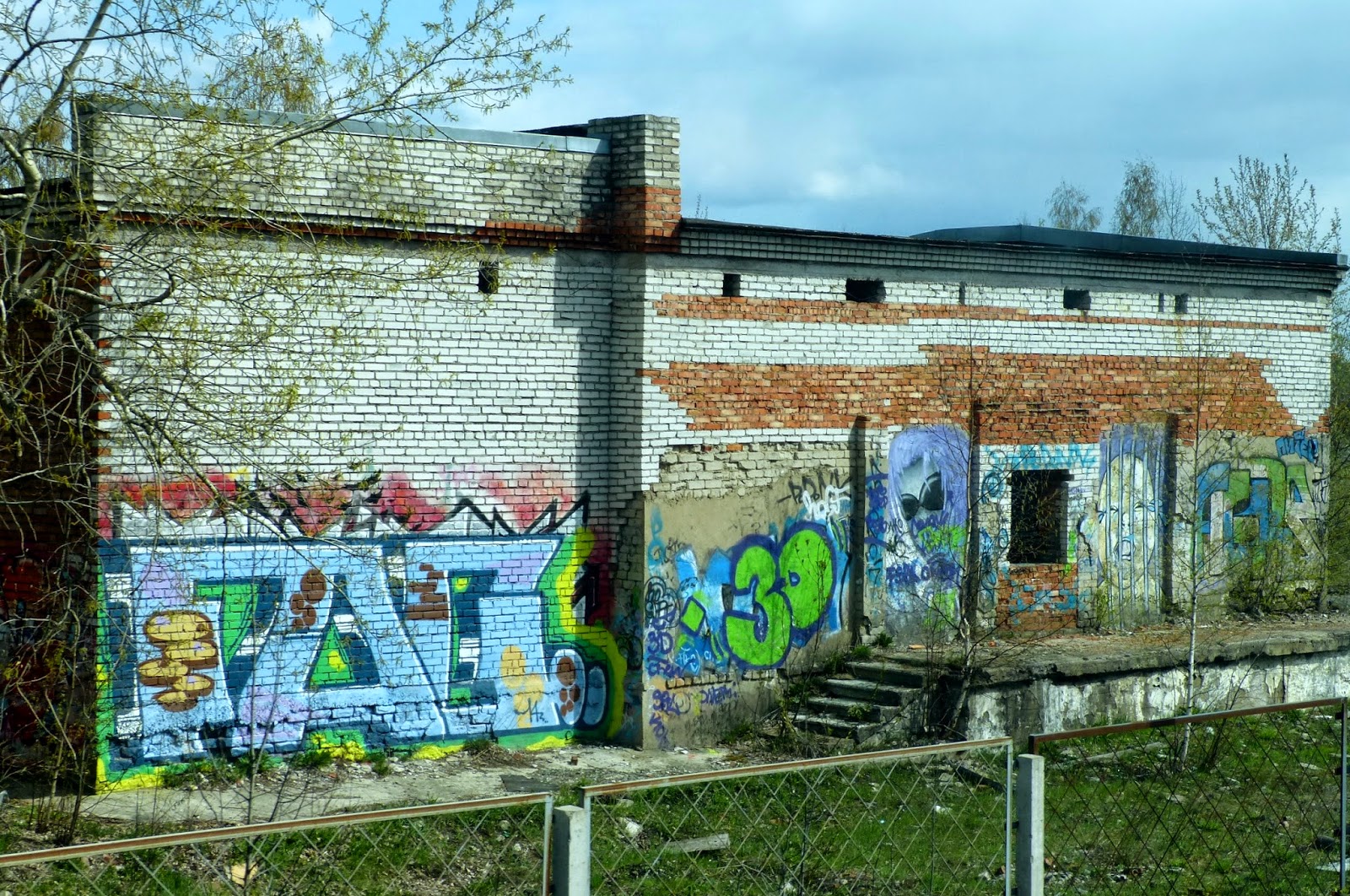 They even have graffiti. 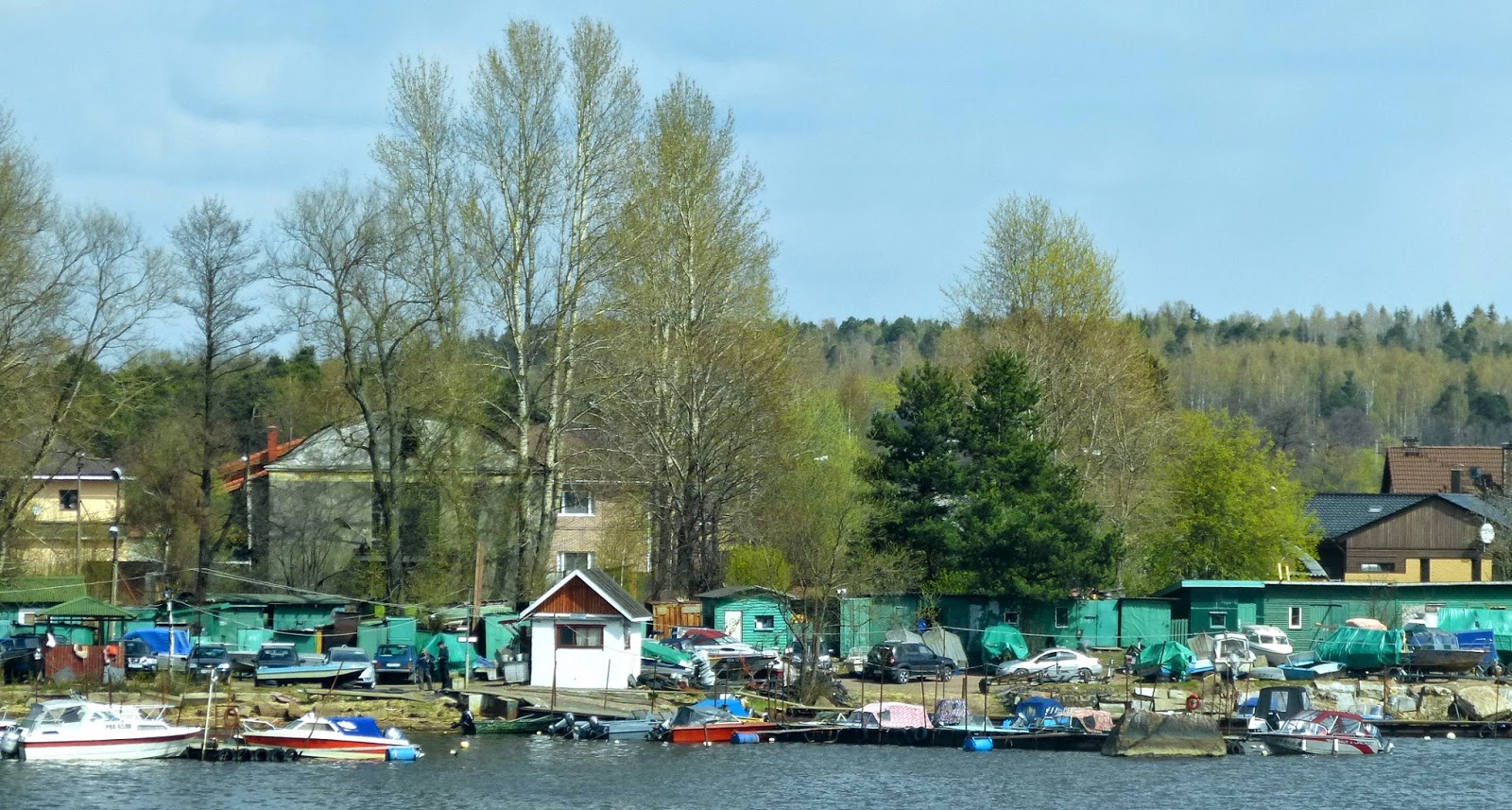 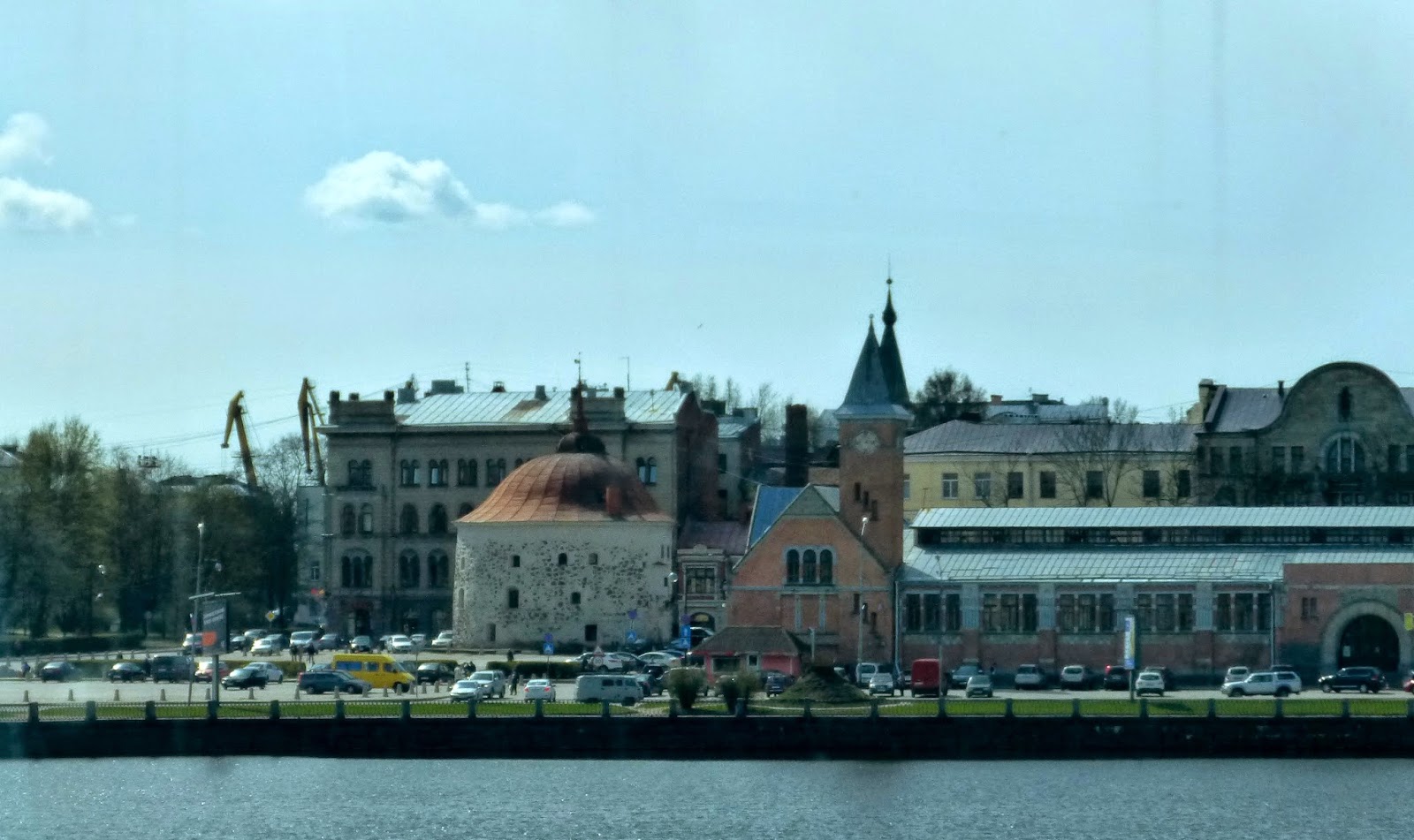 The Round Tower of Vyborg. 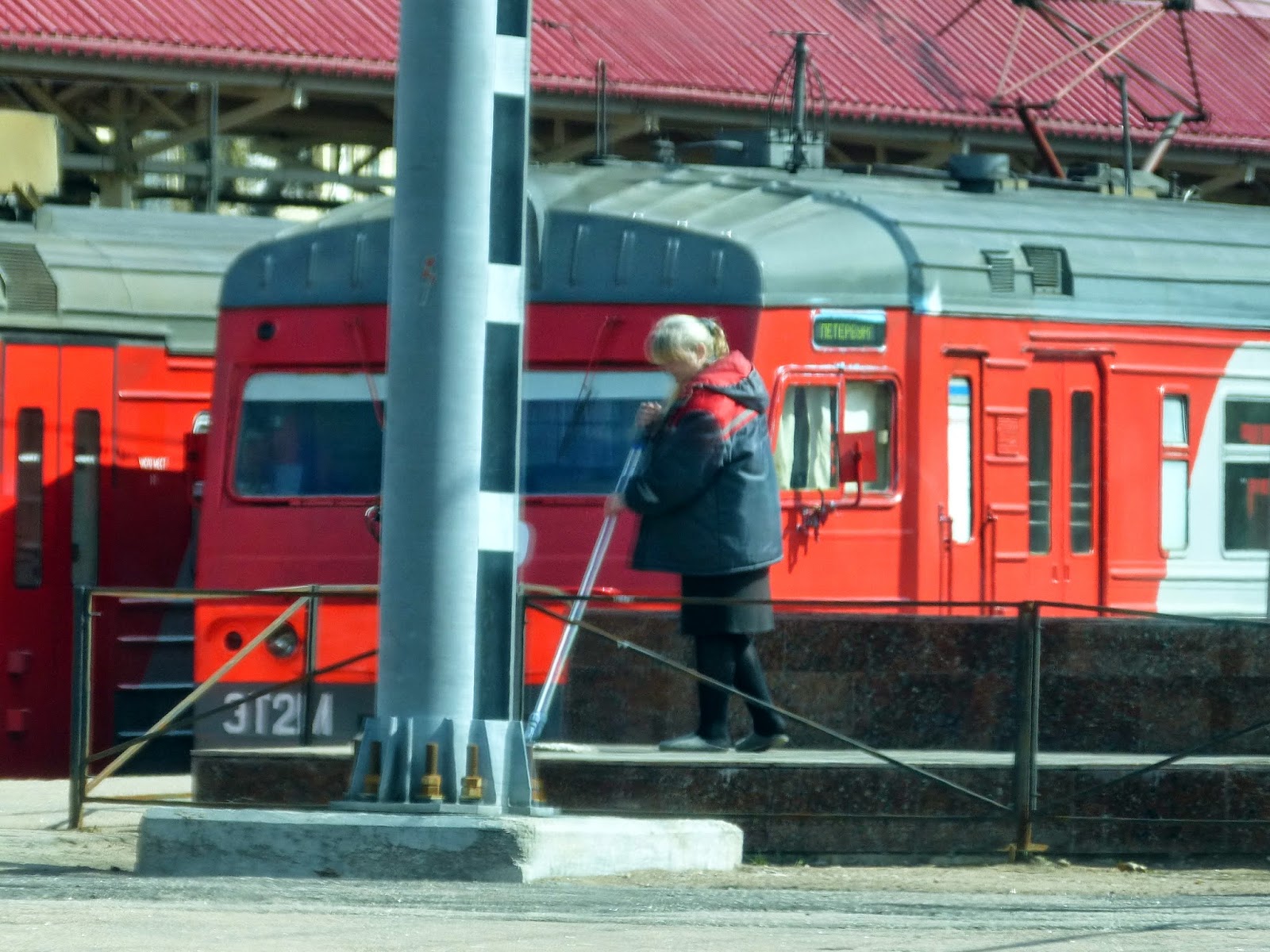 The train waited at Vyborg for a few minutes while the Russian immigration people got off the train. All that time, this woman was sweeping a small raised platform. I suspect she is still there hard at it.

This swooping structure encloses a freeway. It continues on for miles. More housing. Robin should invest in green paint in Russia. 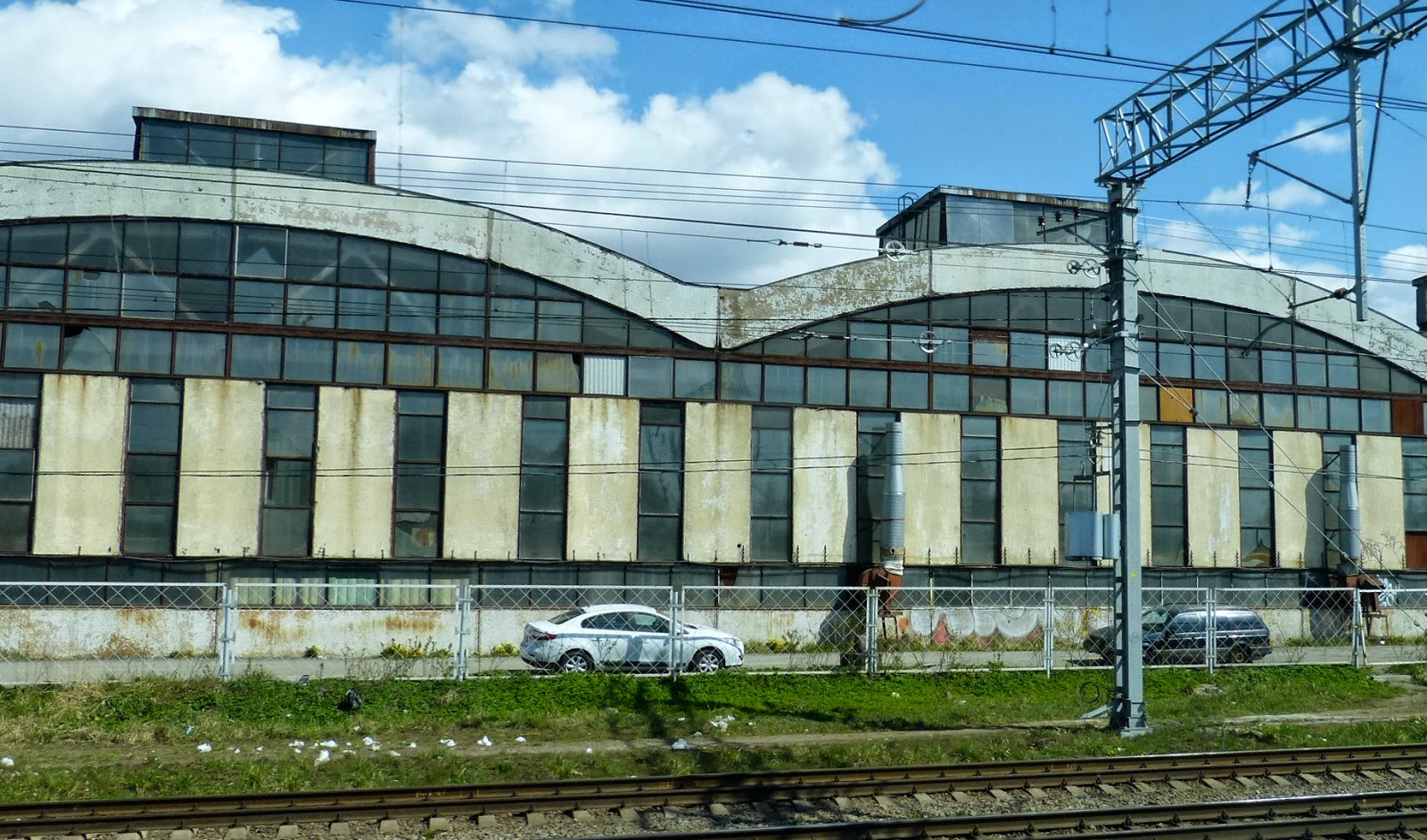 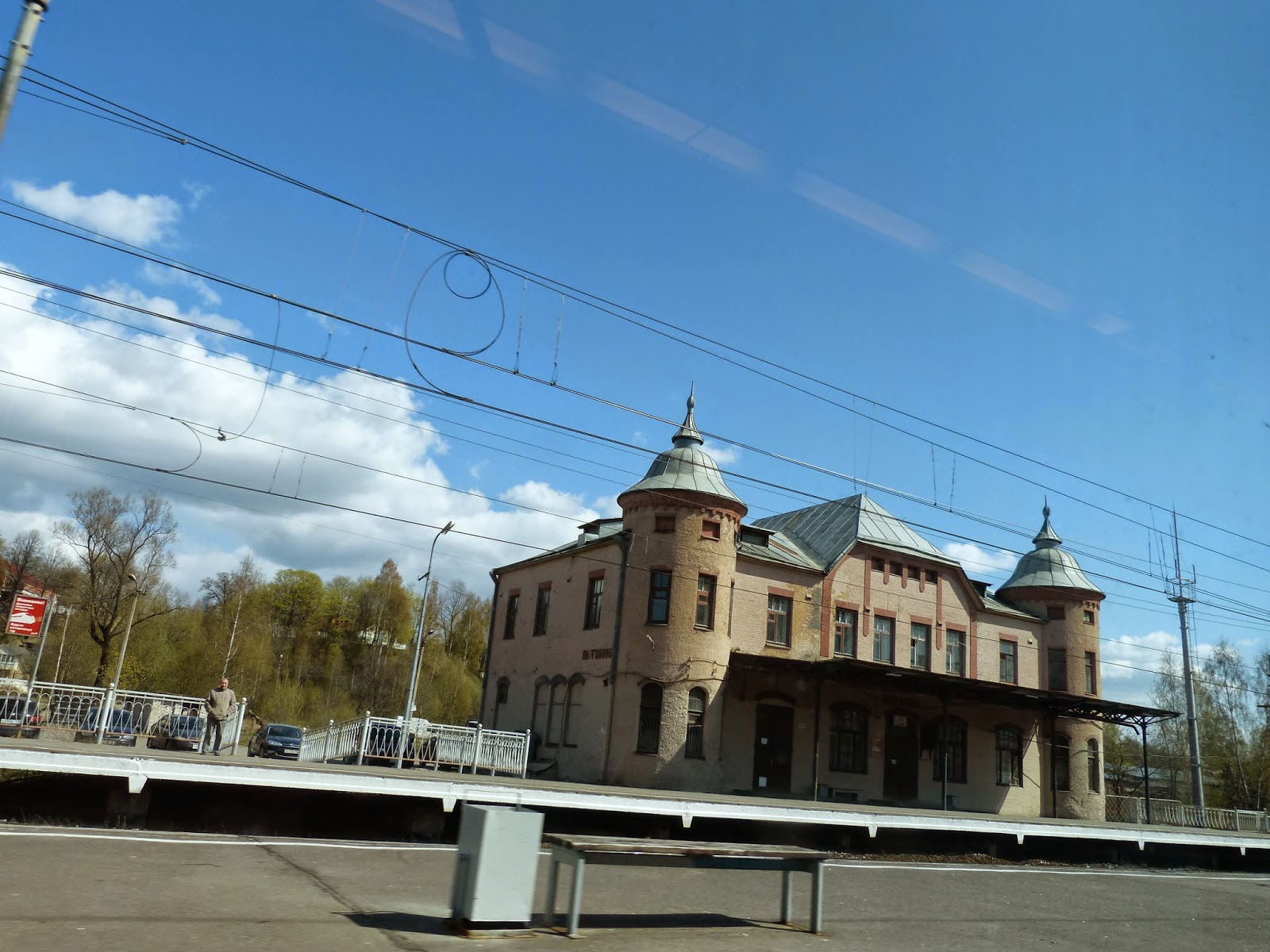 Some of the old station buildings are still standing even if it looks like they are not used now, having been replaced by modern platforms and buildings.

We pulled into Finlandsky Terminal on time. Oddly, all the passengers exited through a side gate to be greeted by dozens of taxi drivers. I managed to find the metro and had no trouble getting to the street where my hotel was. I did have trouble finding the entrance, even though I was standing right in front of it. 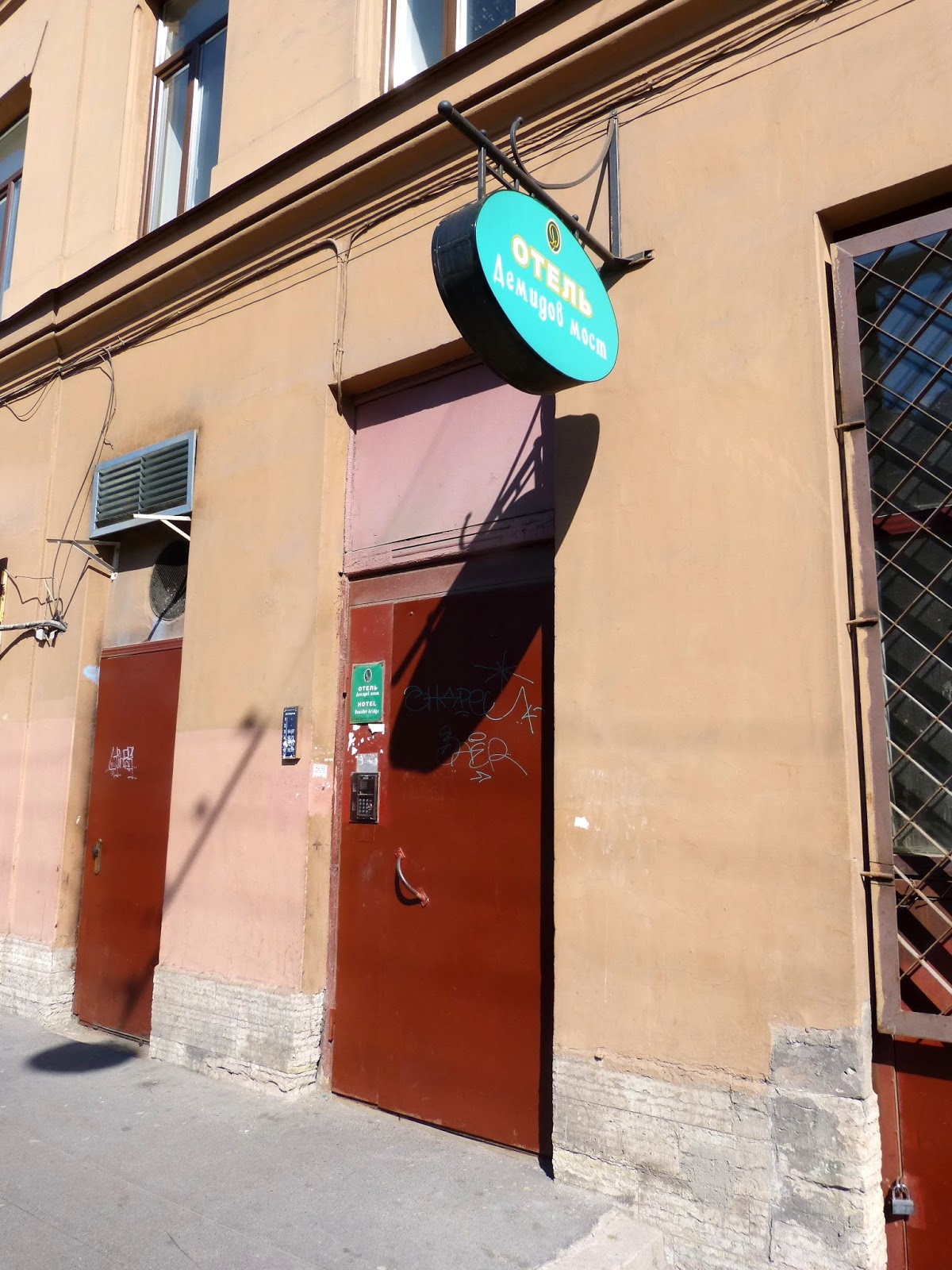 I stopped a bloke going by who spoke a little English and he showed me where to go. That green sign says 'Hotel' in Cyrillic. Fortunately the Metro station signs also have roman script. 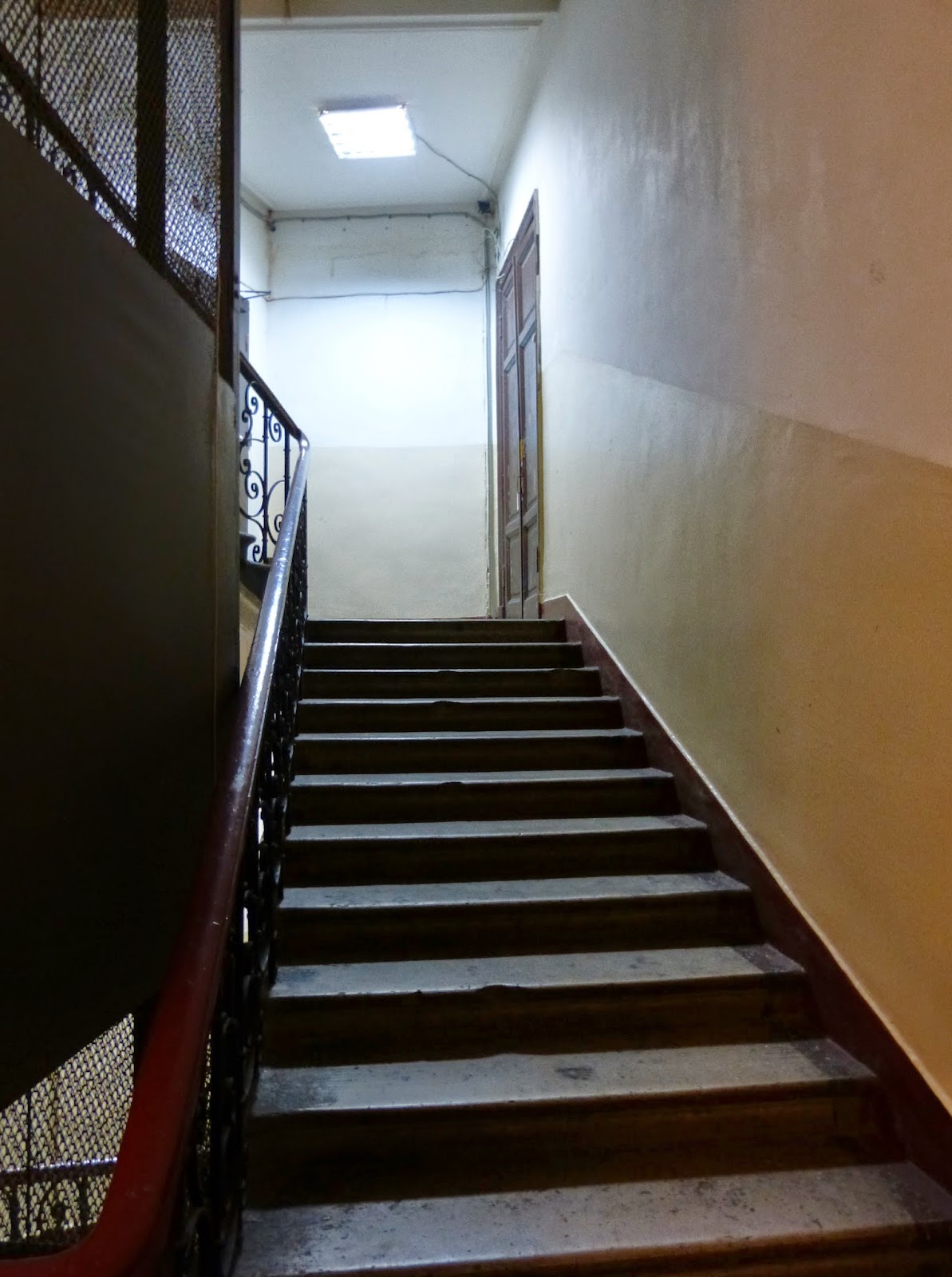 Old battered steps leading up to the hotel. I used the lift. 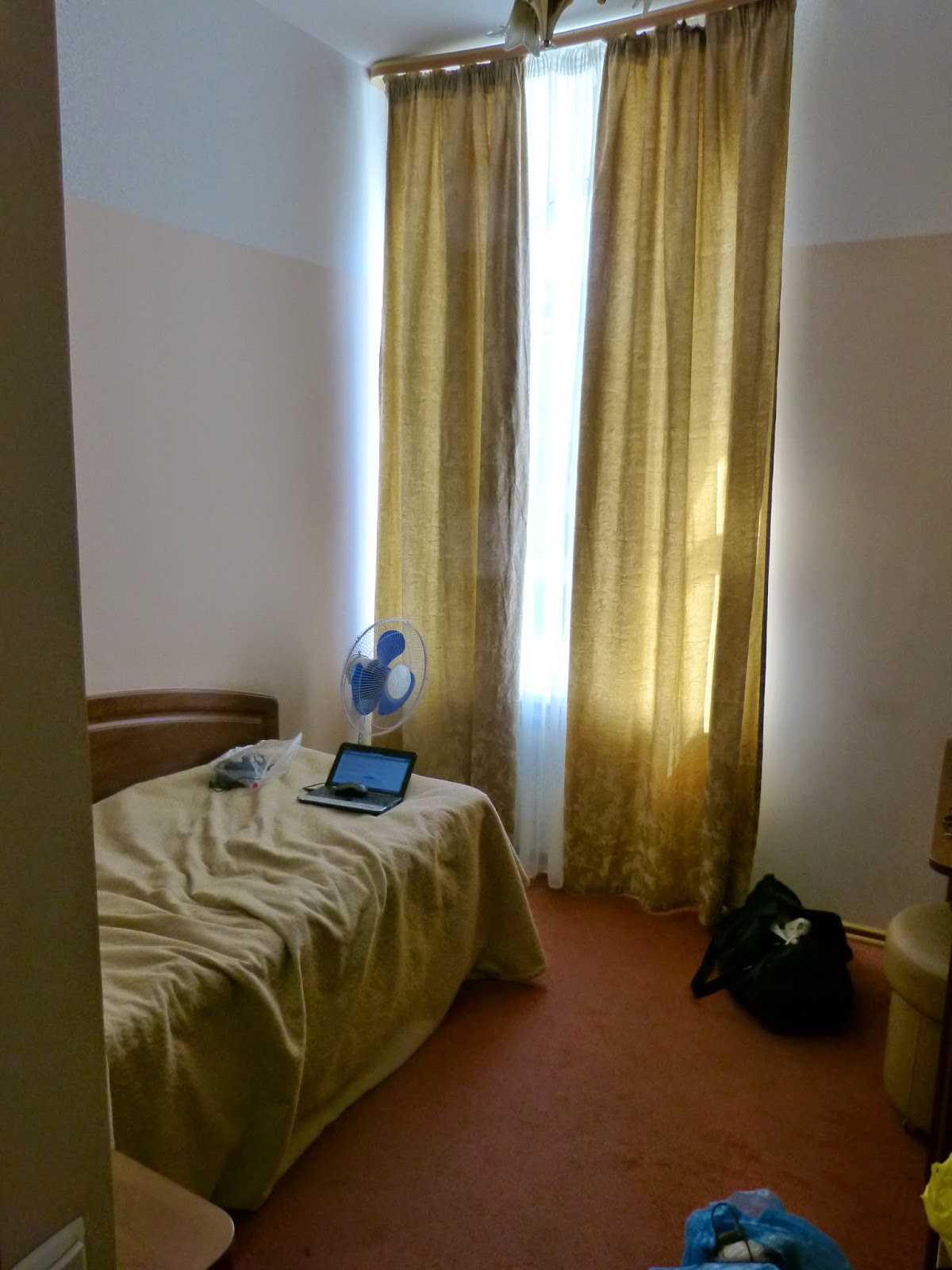 My room is quite pleasant. I booked it through Hotwire. 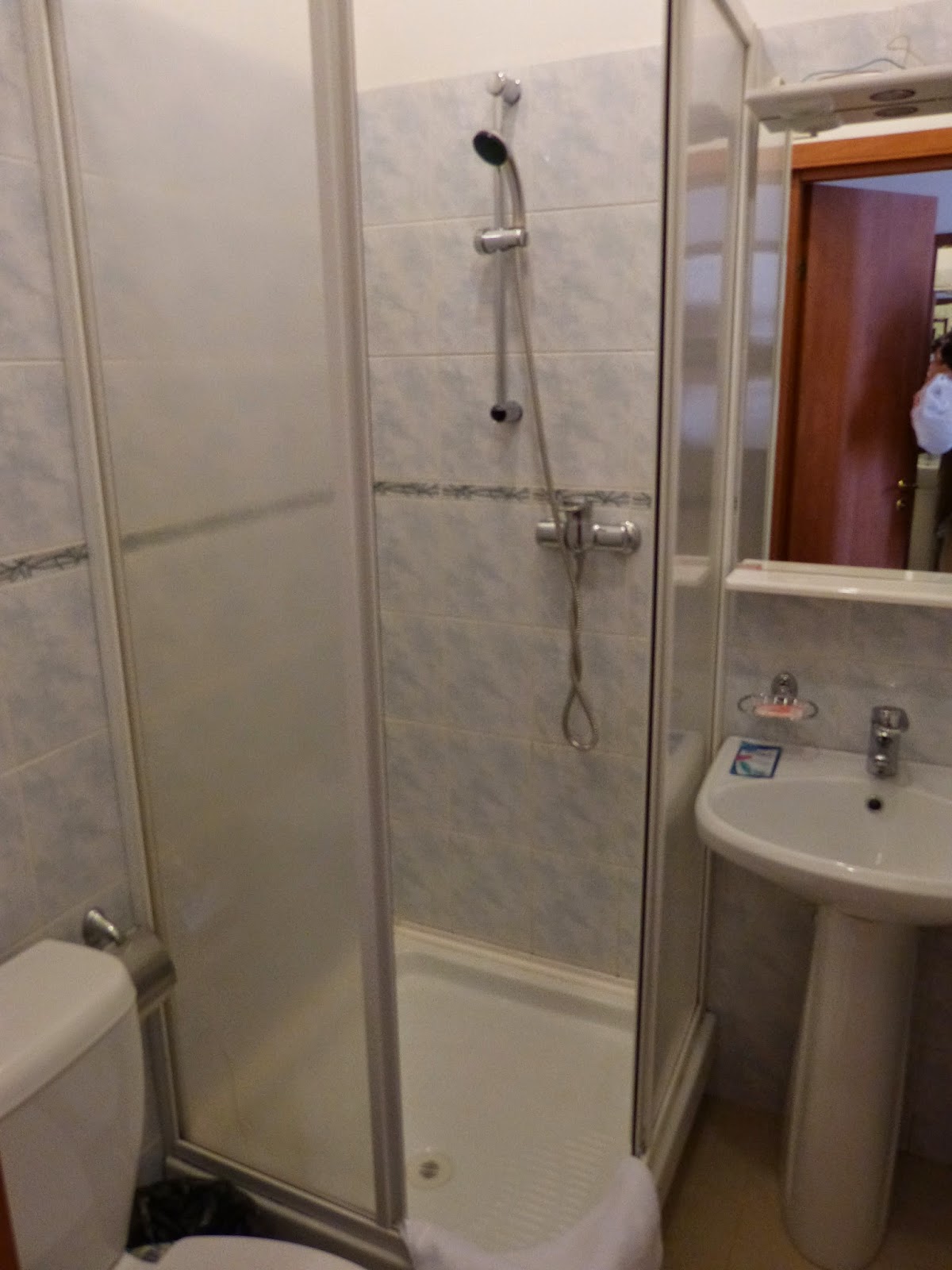 Bathroom. The internet works well enough to do this blog and upload photos. 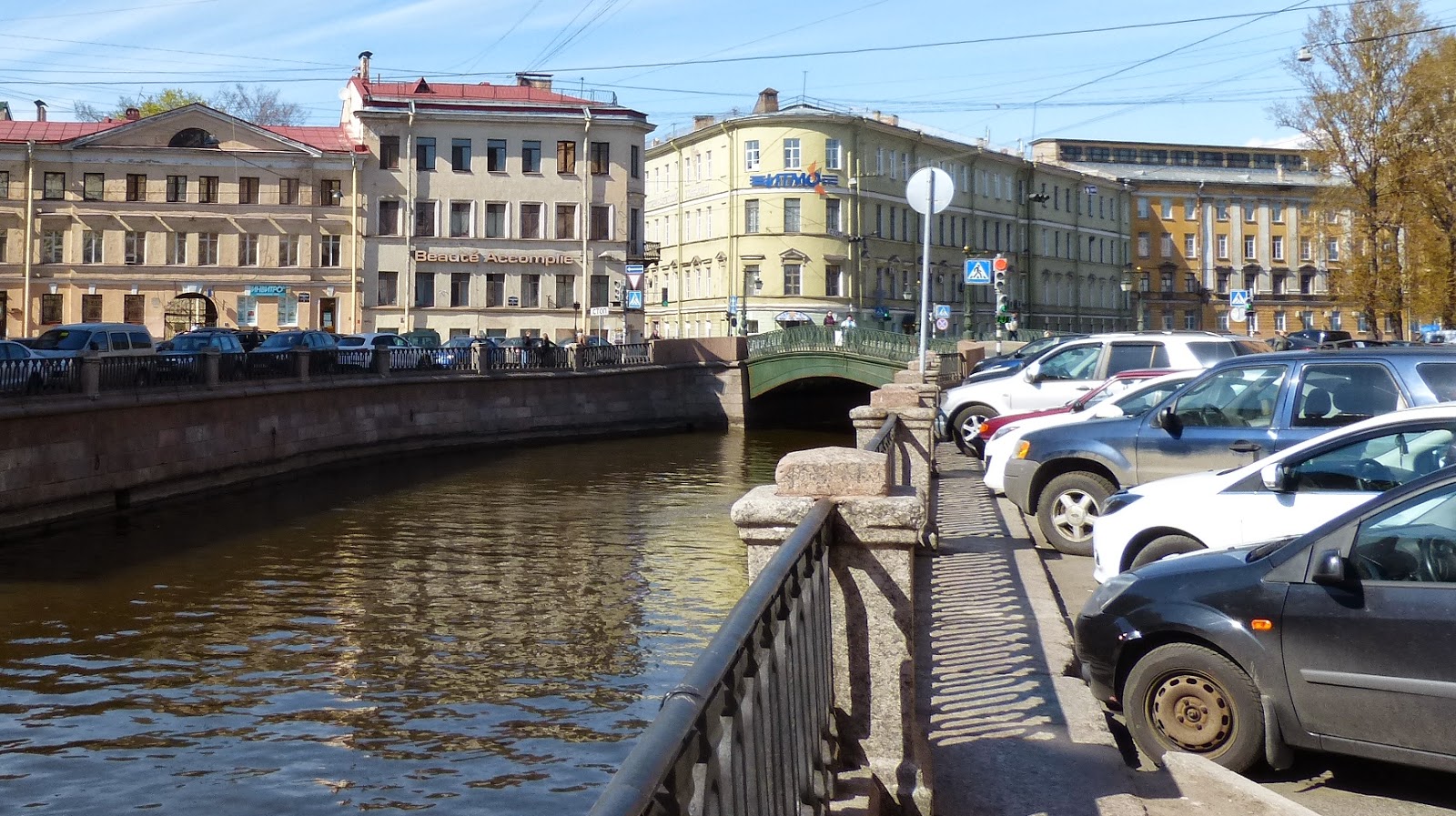 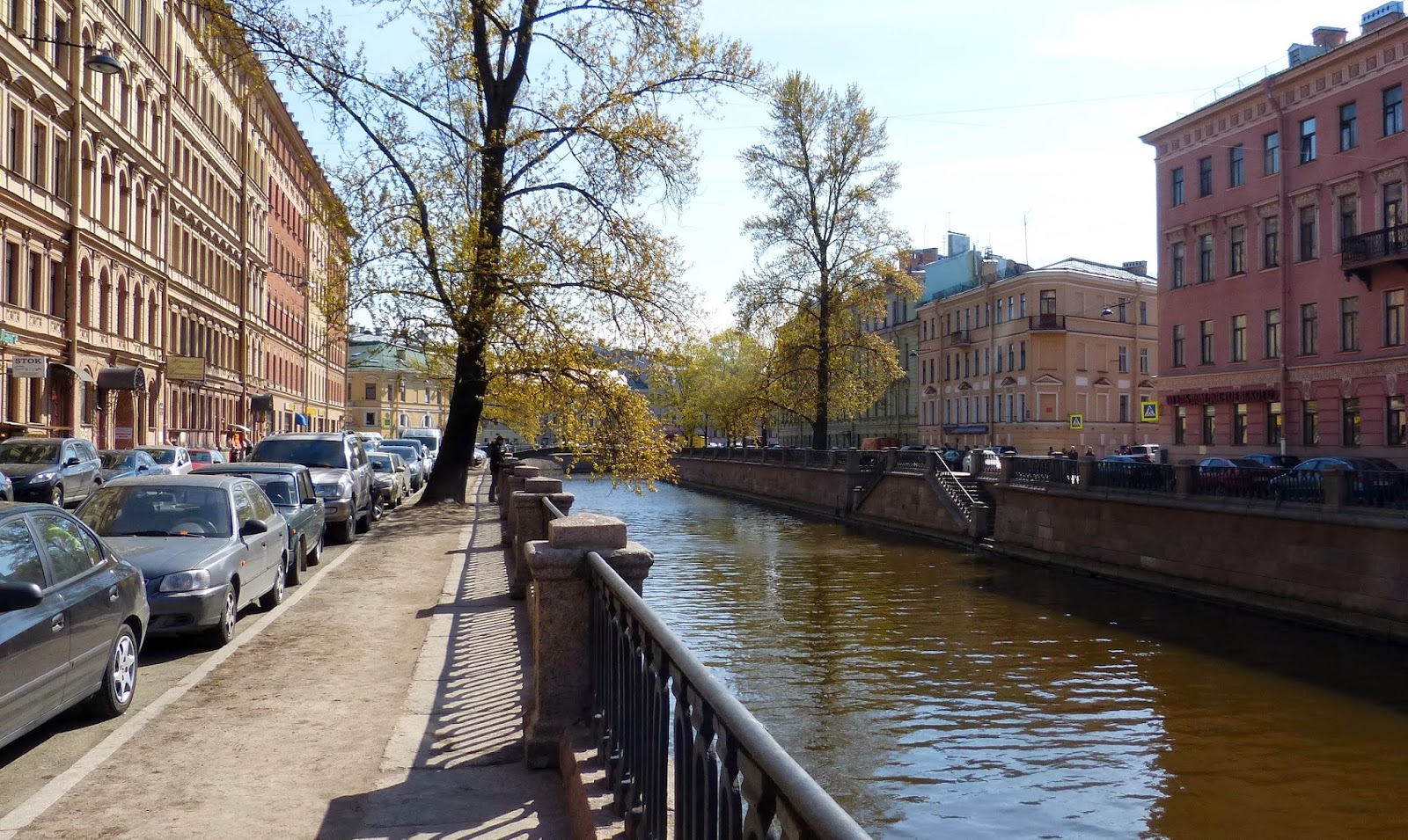 The hotel is right beside this canal and it seems to be a nice district not too far from all the action. 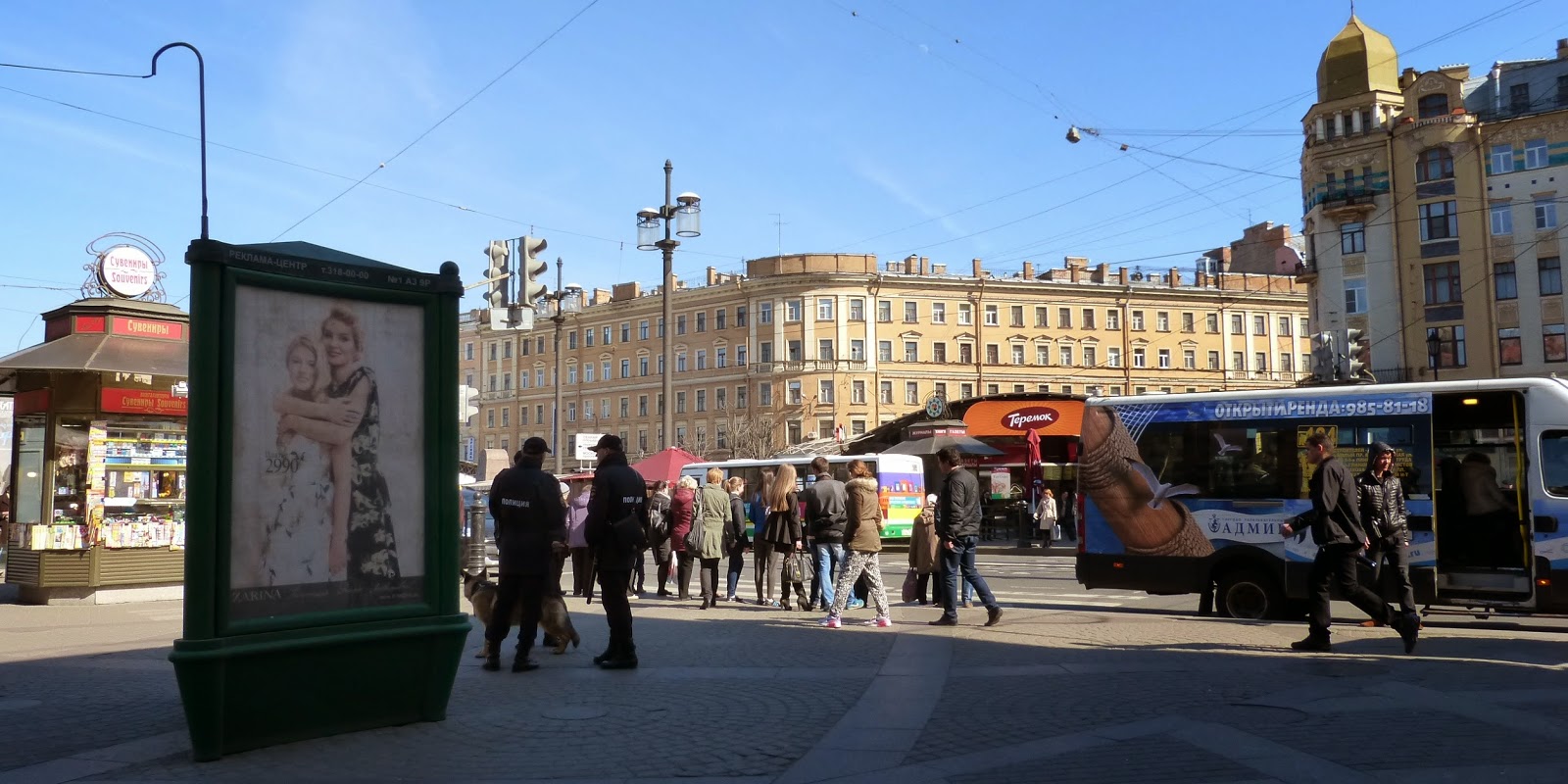 Large shopping street not too far from the hotel. It's known as Sadovaya Street. I went to a supermarket to get some food as well as a large bottle of water so that I do not have to drink tap water. The following ius from Trip Advisor.

The water from the tap passes international standard tests for health but few visitors drink it due to rumors from years past when the city was a major industrial city with all the contaminants that entails. A new modern state of the art water treatment plant in the city center has brought the levels of purity up to high levels.  The water does in places, traverse 100 year old pipes so it might have an off taste.  All hotels and most cafes and restaurants have water filtration systems that produce good tasting water.  The locals use water for cooking and tea but prefer juice, beer and mineral water over plain water.  However, it is not recommended you drink the tap water.

So far I have liked St Petersburg. It seems to be much more civilized than New York.