This has to be one of the oddest train journeys I have ever taken.

Just before we got to Nanning, the attendant handed me this notice. 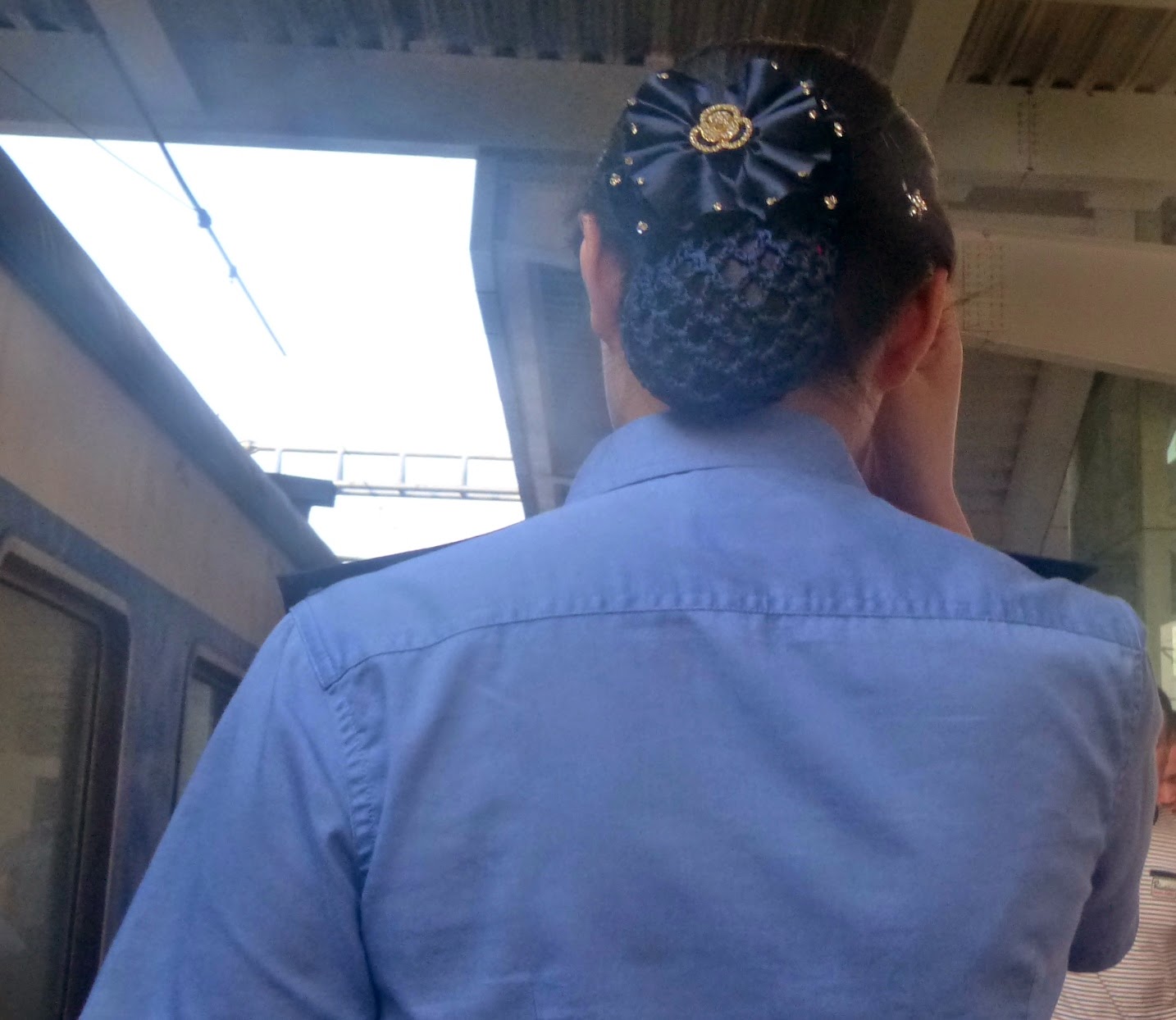 Two female attendants escorted me to the waiting room, one in front and one behind to make sure that I did not escape. I was intrigued by the hair bun decoration. 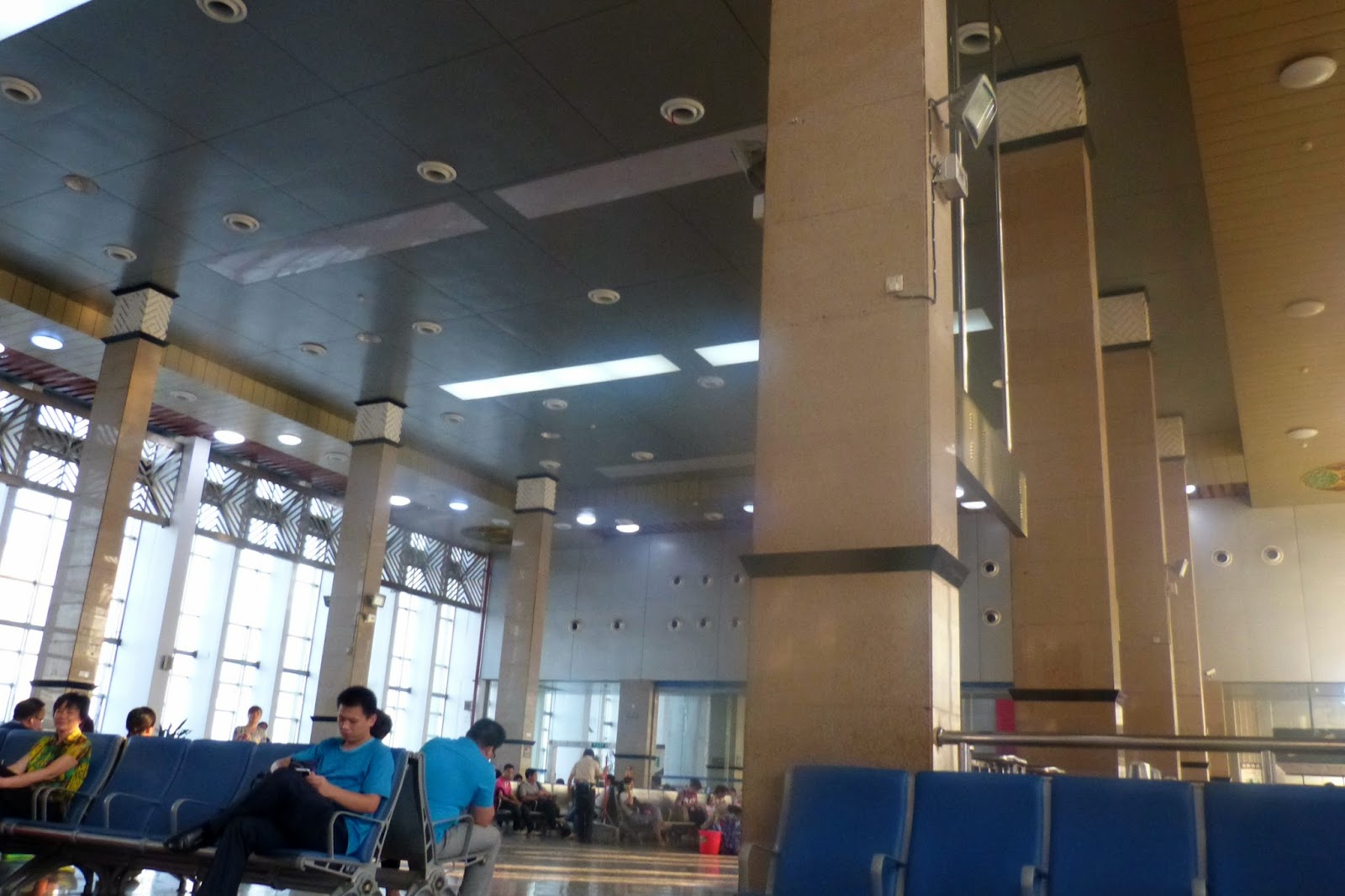 They motioned for me to sit down in this area so I obeyed and commenced my five hour wait until the train would leave at 9:15 pm. 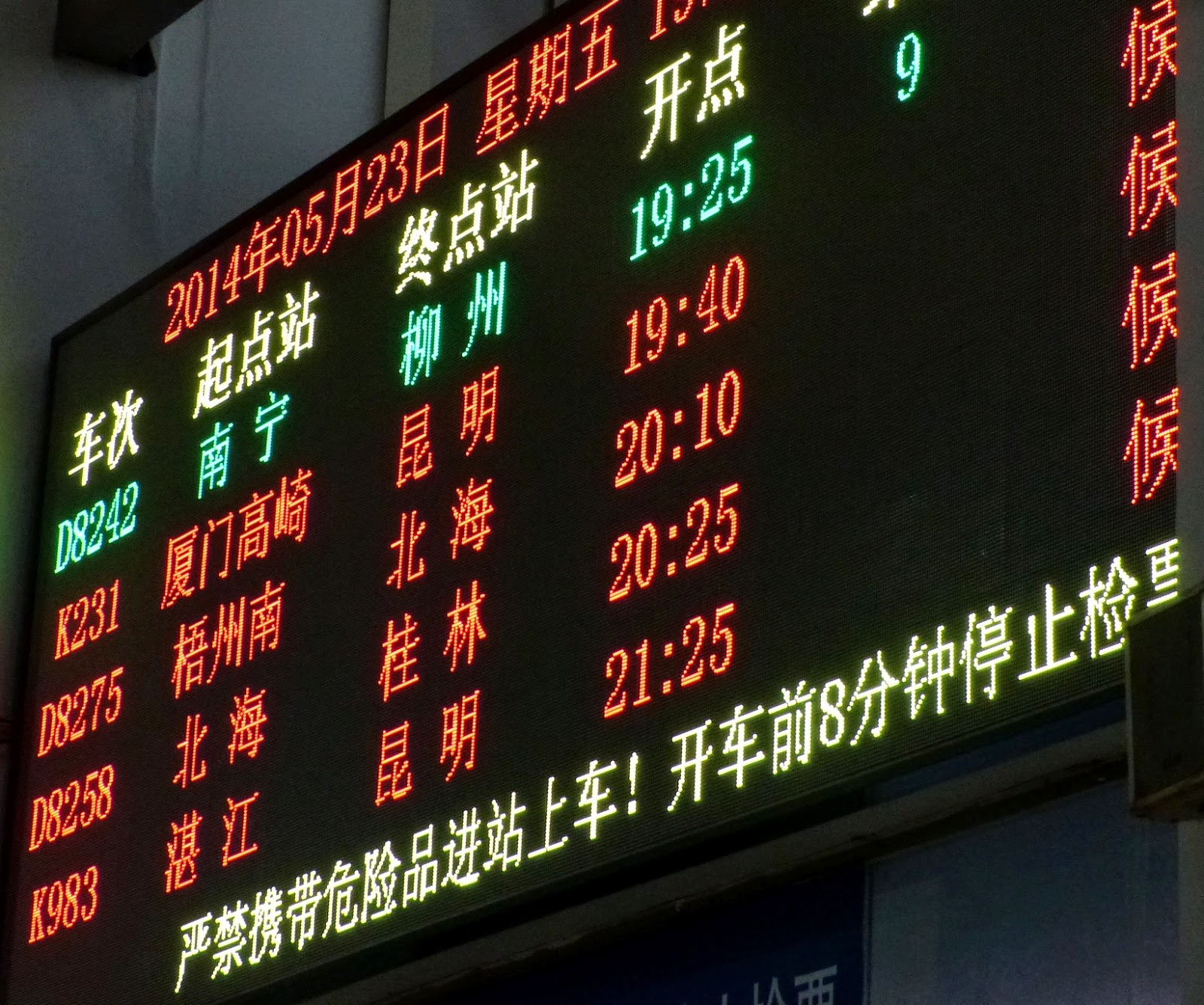 The departures board shortly after I arrived. My train T5 was not mentioned. 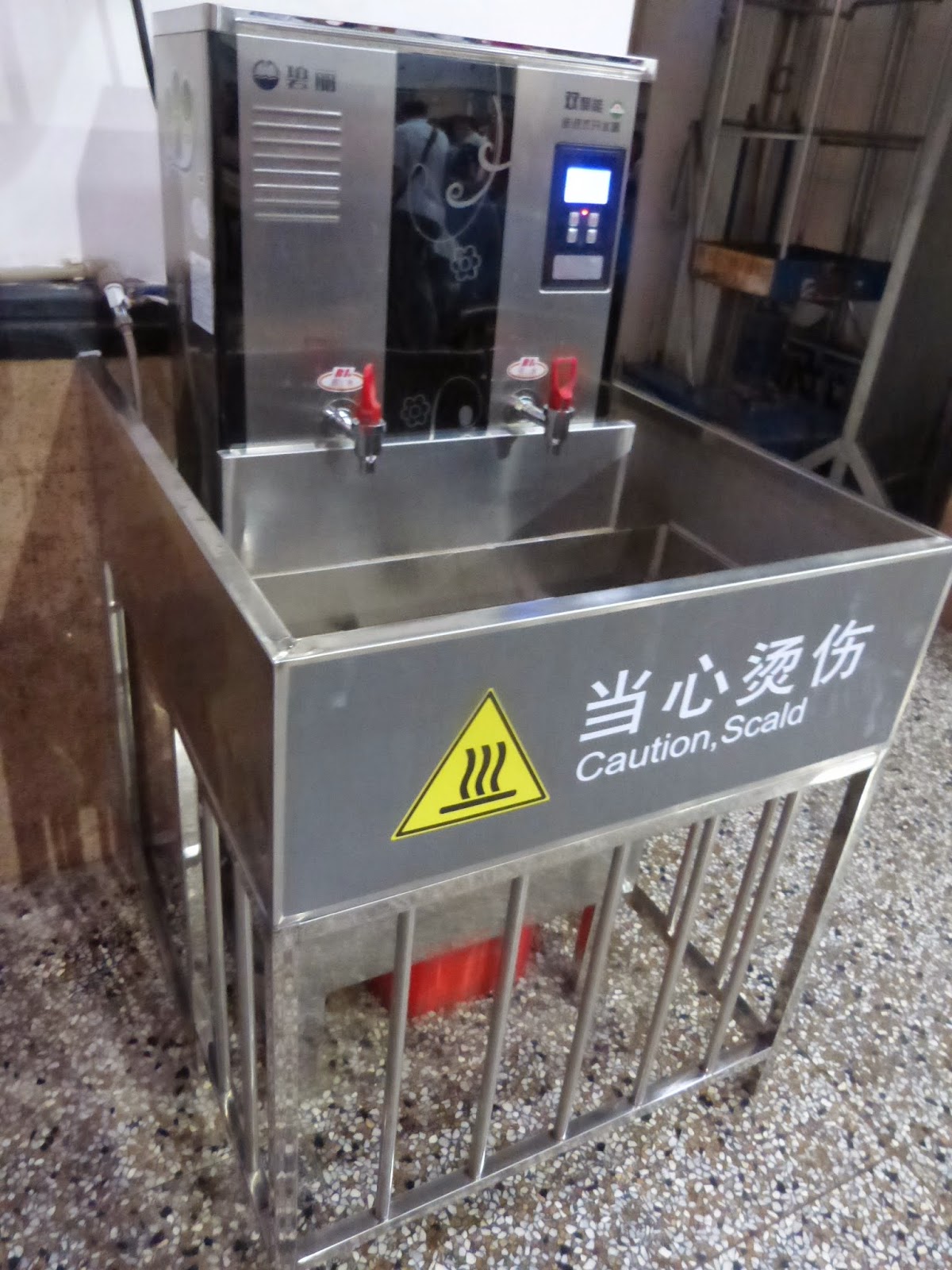 I was seated right next to this hot and cold water dispenser. There was a toilet around the corner but I did not investigate it. I had gone just before we reached Nanning.

For about an hour before each train departed the waiting room would fill to the brim. Eventually the gates would open and the horde would stream through to the train. There were always people running to catch the train at the last moment.

Eventually I noticed that my train had been re-numbered as T8705 instead of T5 with the departure time of 21:15.

After D8258 departed, most of the crowd had gone and soon I was the only one left. 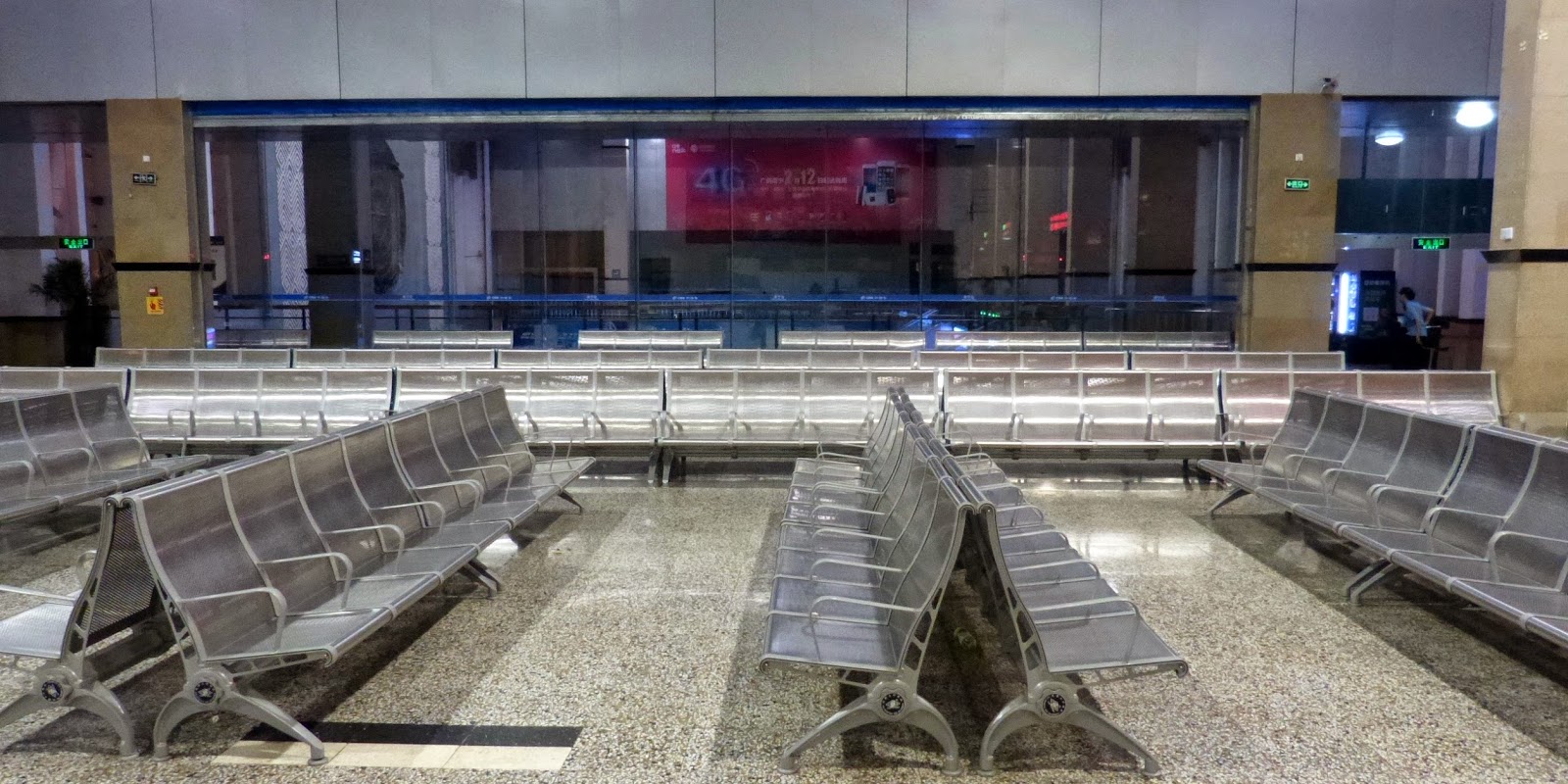 At 20:45 a young lady attendant beckoned and led me back to the train which was now reduced to two carriages. 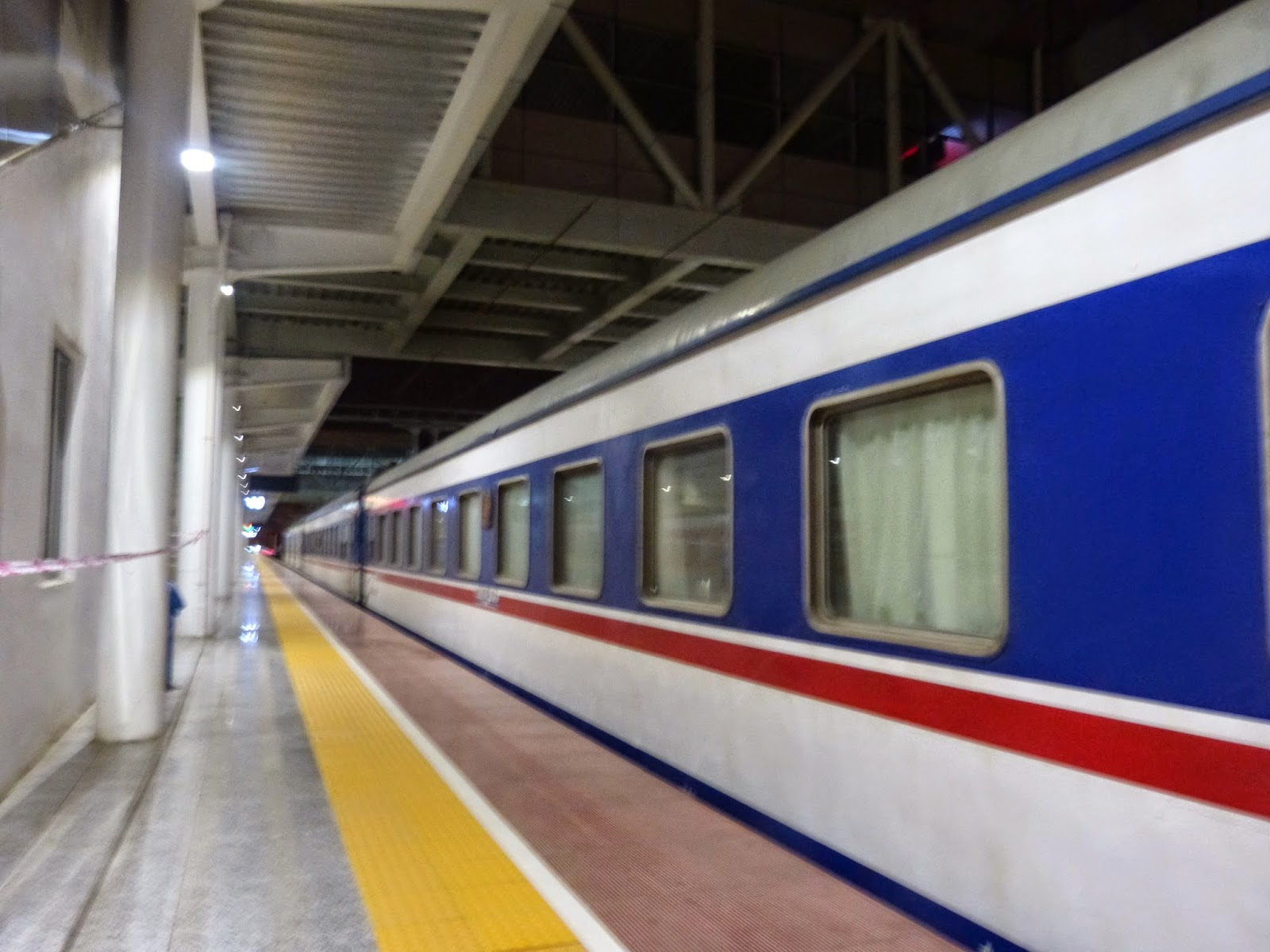 I had to wait a couple of minutes to get into the carriage until they turned on the power in the carriage. The engine hooked up at 21:00 and we set off at 21:15.

Even though I was in the same carriage, it was quite different from the ride down from Beijing. the driver kept blowing the horn every eight to 10 seconds. The engine was right next to my carriage. Luckily I had some ear plugs so I was able to reduce the noise but it was definitely irritating. I was the only passenger.

I had set my alarm but woke anyhow about 1 am when we stopped at a station on the Chinese side of the border. I think it was Pingxiang. The station was almost in complete darkness but a Chinese immigration officer appeared and asked for my passport and departure slip at 1:15. He returned at 1;50 and gave me back my passport. At 2:30 another engine was hooked onto the carriages and we set off at 2:40. From my GPS I could tell we were only about 7 miles from the border of Vietnam. We continued quite lowly and stopped a few times. Again the horn blew every few seconds.

Finally it appeared as if I was in Vietnam at Dong Dang. The attendant gave me back my ticket and I descended from the carriage and was led to the waiting room. 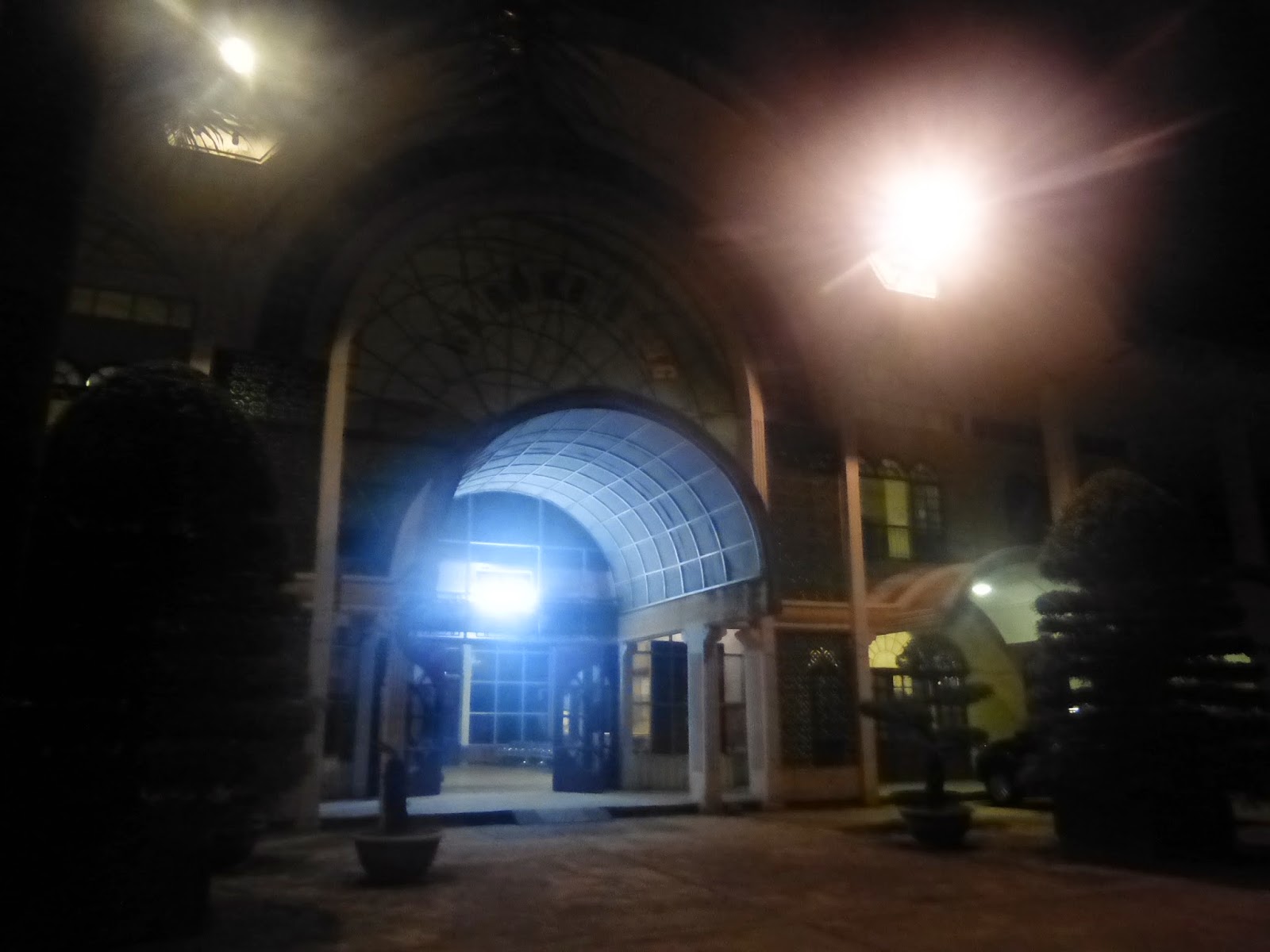 A Vietnamese Immigration official took my passport and visa paper. In the meantime, I looked around and I swear it was the land of the zombies. About twenty travelers were headed north and were waiting to get their passports back. They looked totally zonked. Eventually the official reappeared, called their names and gave them their passports and they moved off slowly to the train I had arrived on. This was about 3:25 Vietnamese time.

The officials left and I was left on my own in the waiting room. At least I was in Vietnam.

My train from China is on the left and the carriage for Hanoi can just be seen under the bright lights. At 3:55 an attendant appeared and took me to my carriage. He turned on a switch and a huge motor started up that made a dreadful din and caused a huge vibration. I think it ran the air-conditioning unit. 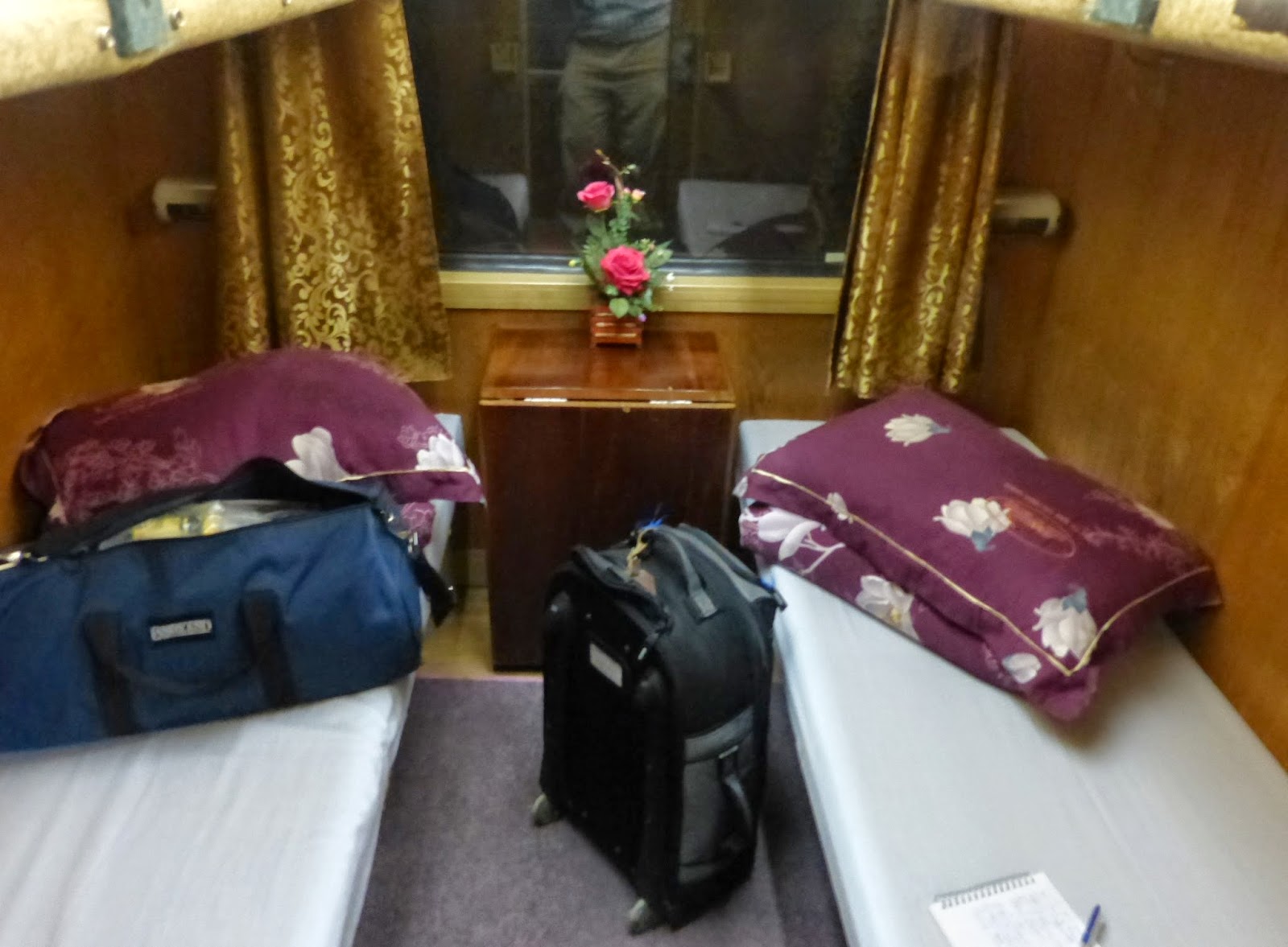 My vibrating compartment. I was much relieved to be on board. Eventually an engine hooked up and away we went. I put the ear plugs back in to help deal with the noise and of course the continual blasts on the horn. Somehow I managed to get some sleep. I could sense that the train was moving very slowly. 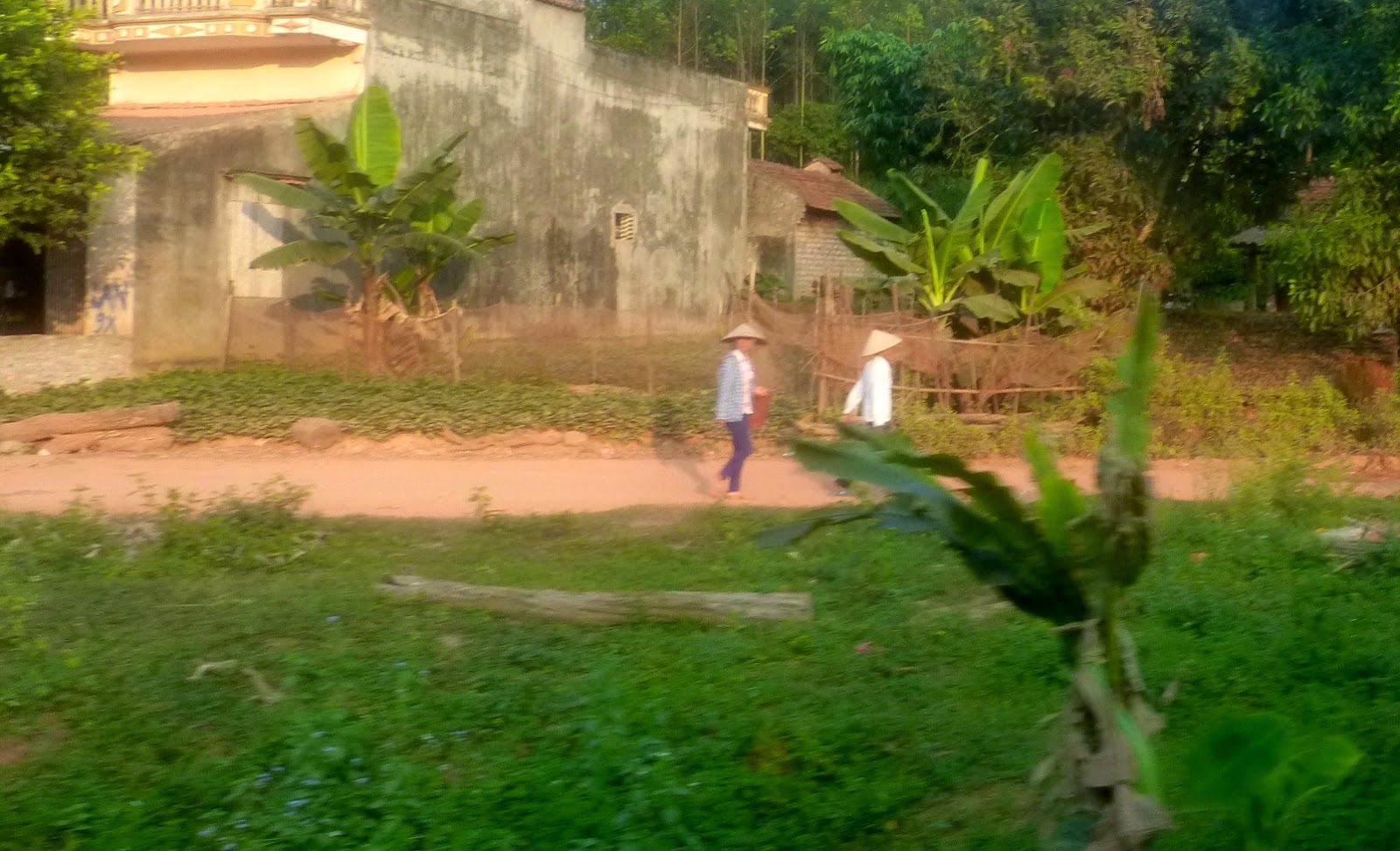 I woke next morning to bright clear sunshine and a totally different landscape. It was like getting off the plane in Brisbane after flying from Los Angeles. 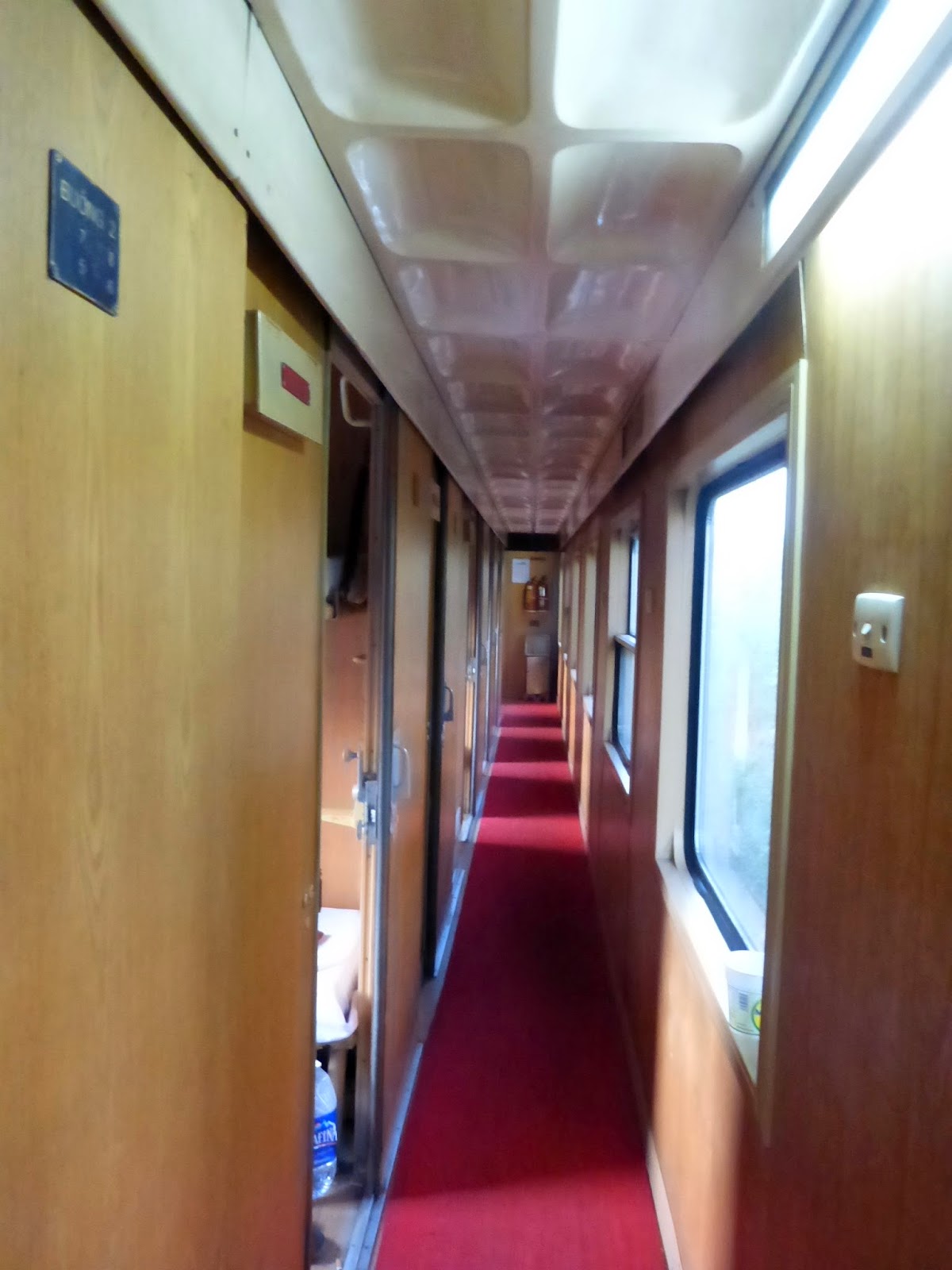 Of course, I was the only passenger. 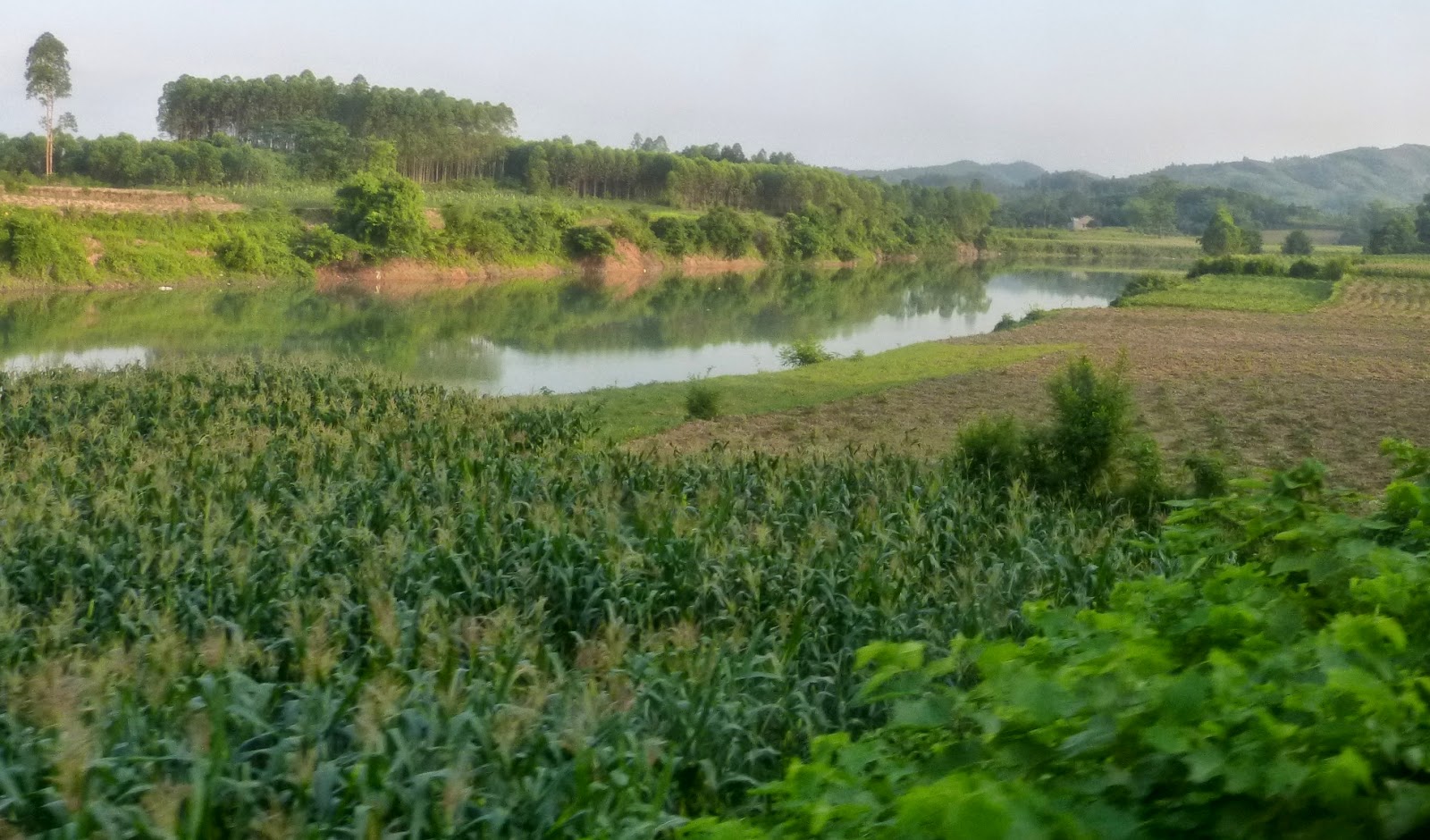 The countryside was much lusher than that of southern China. 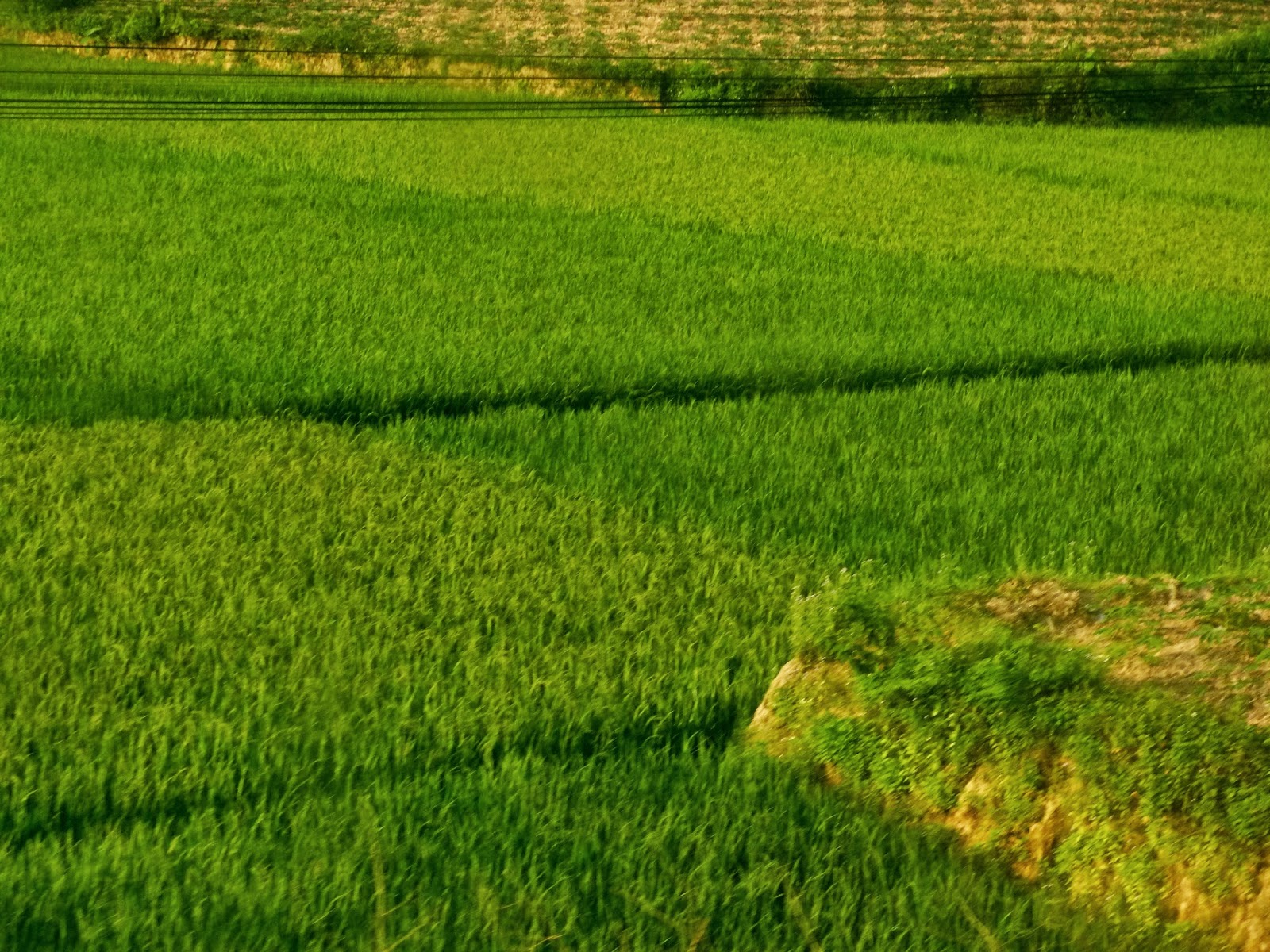 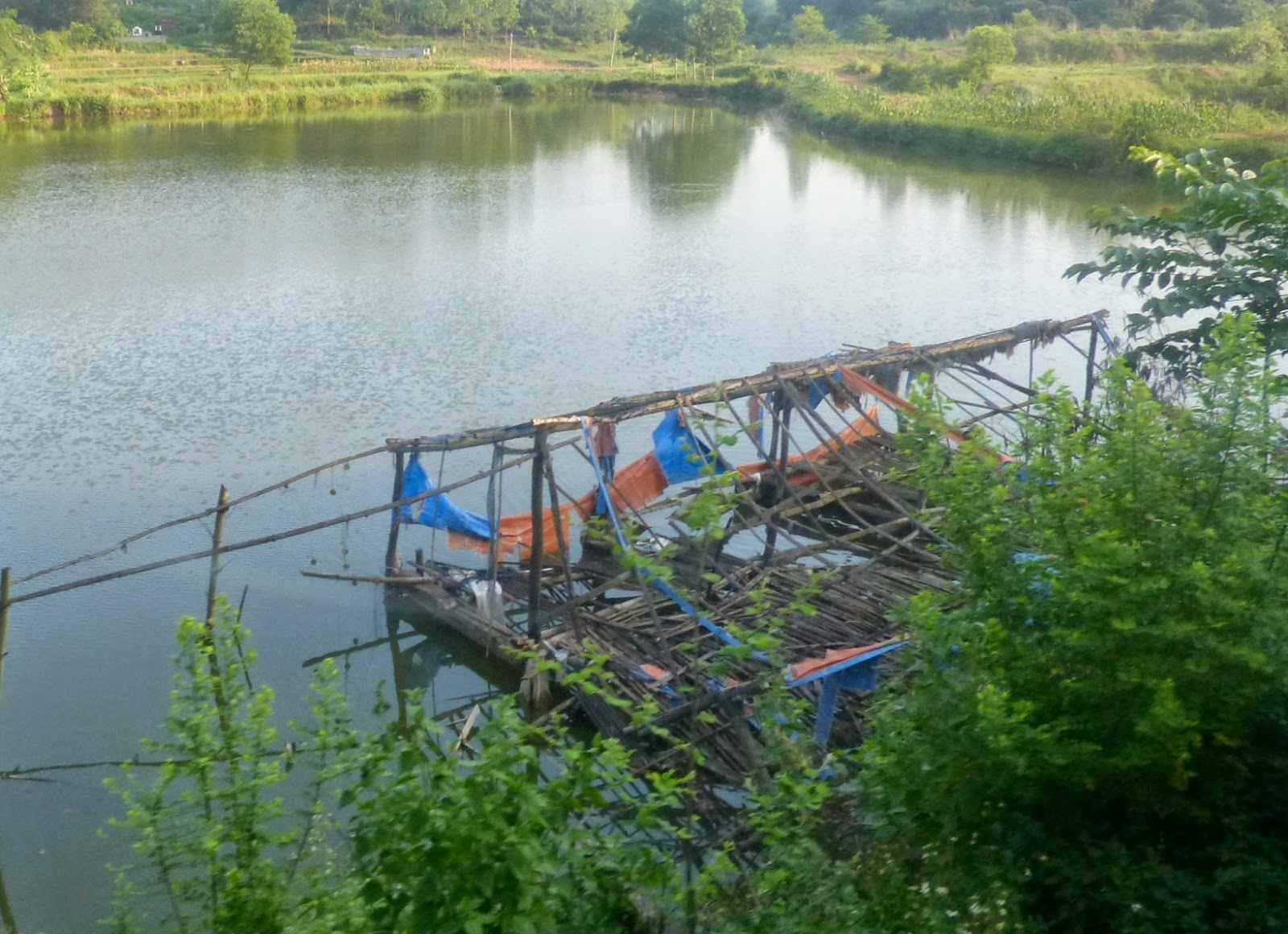 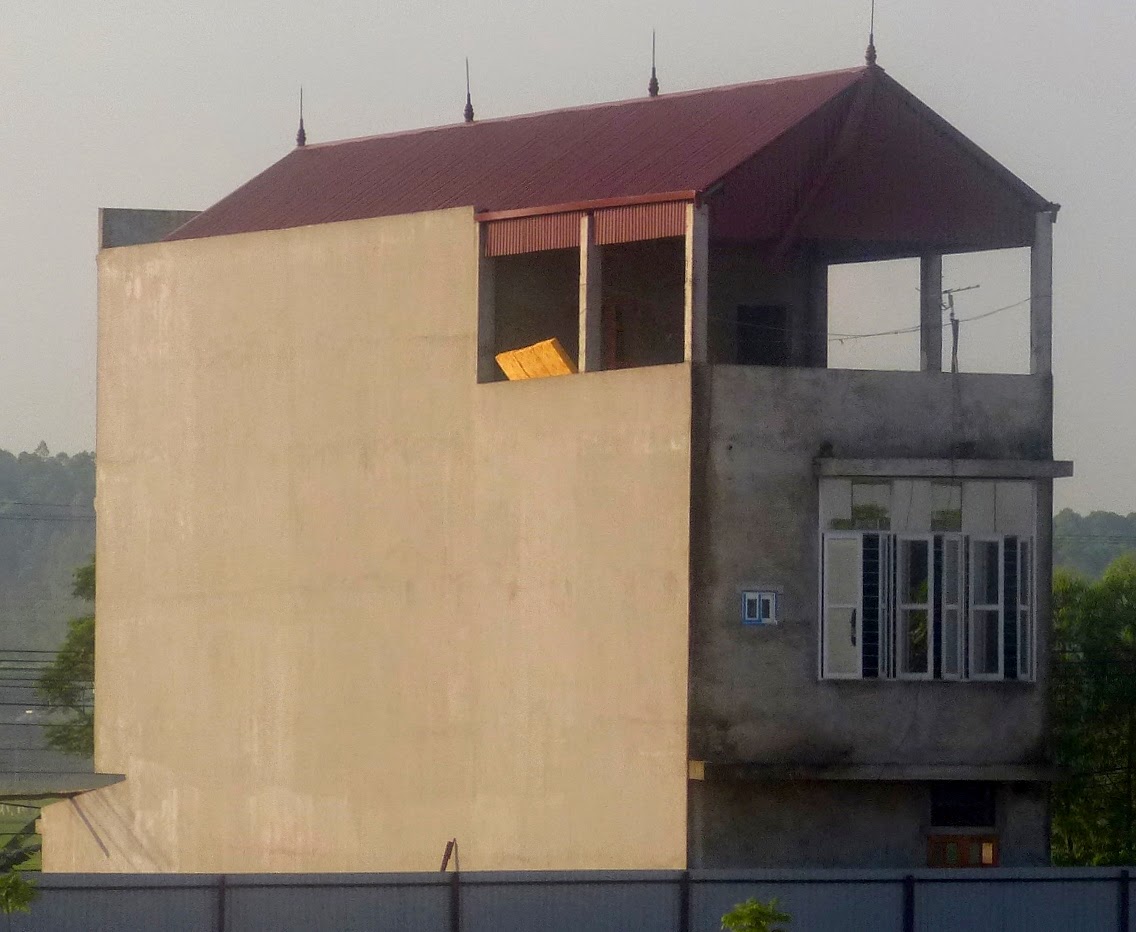 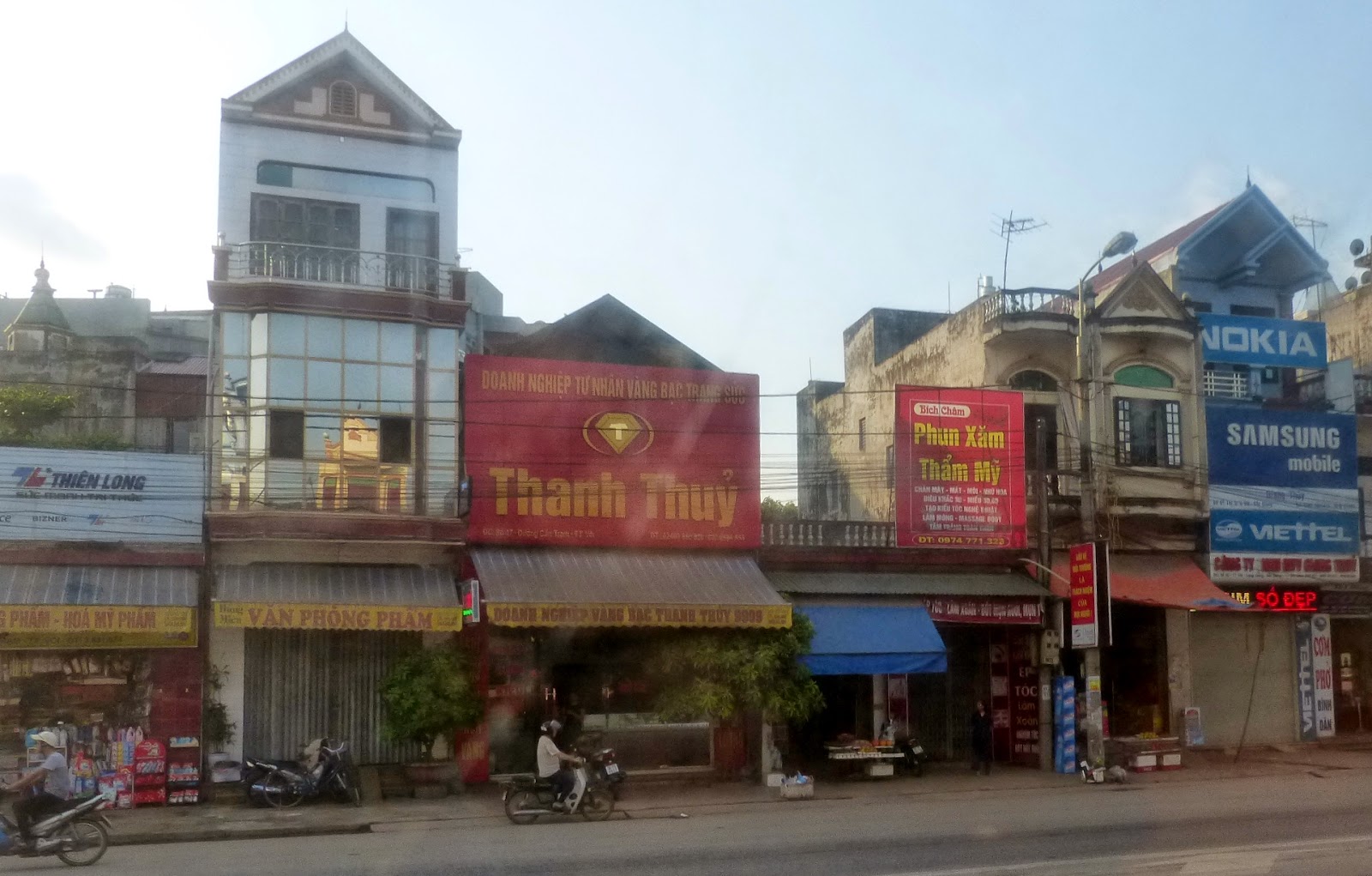 A small town about 40 miles out of Hanoi. The train had now increased speed to about 20 to 25 mph. 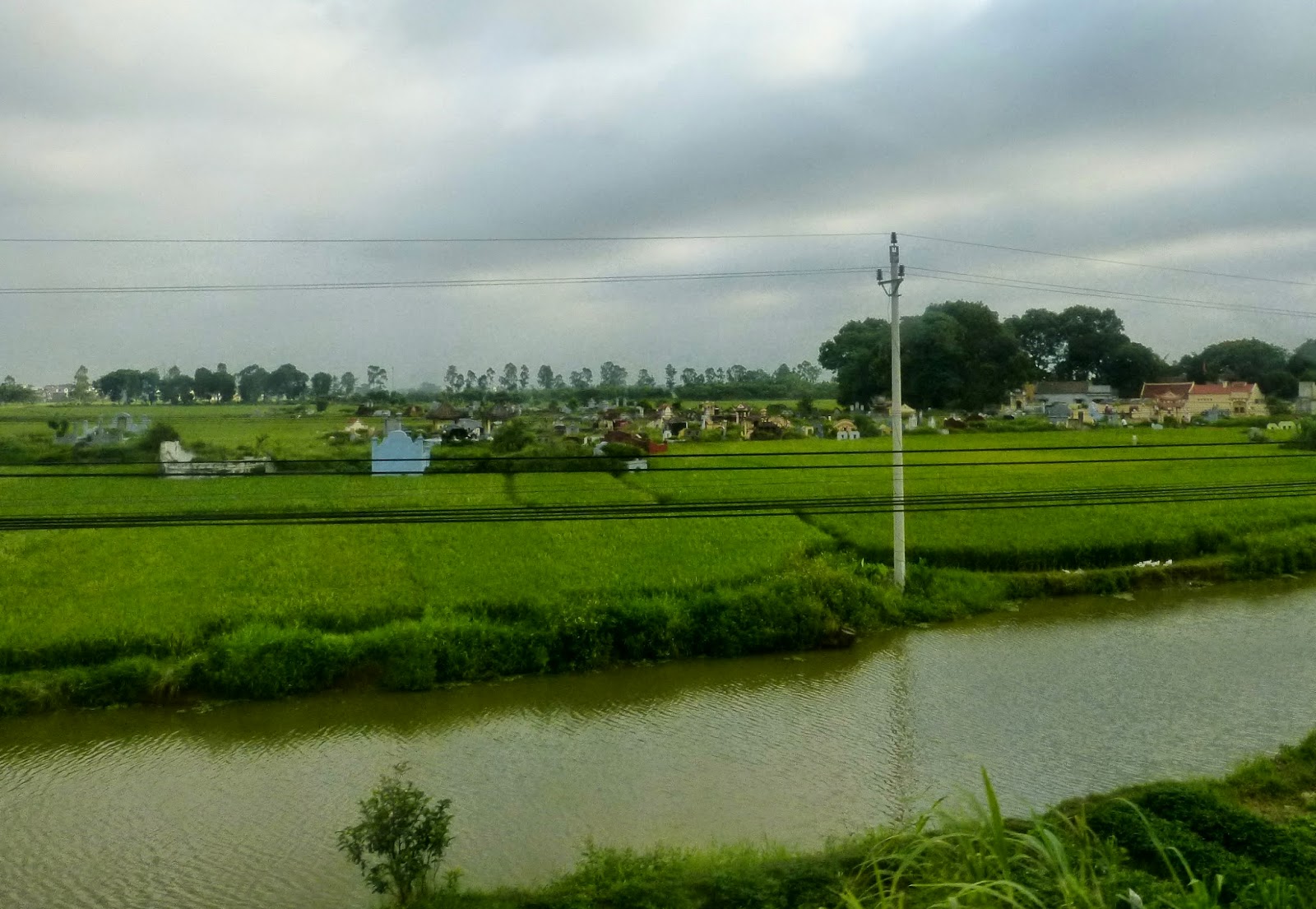 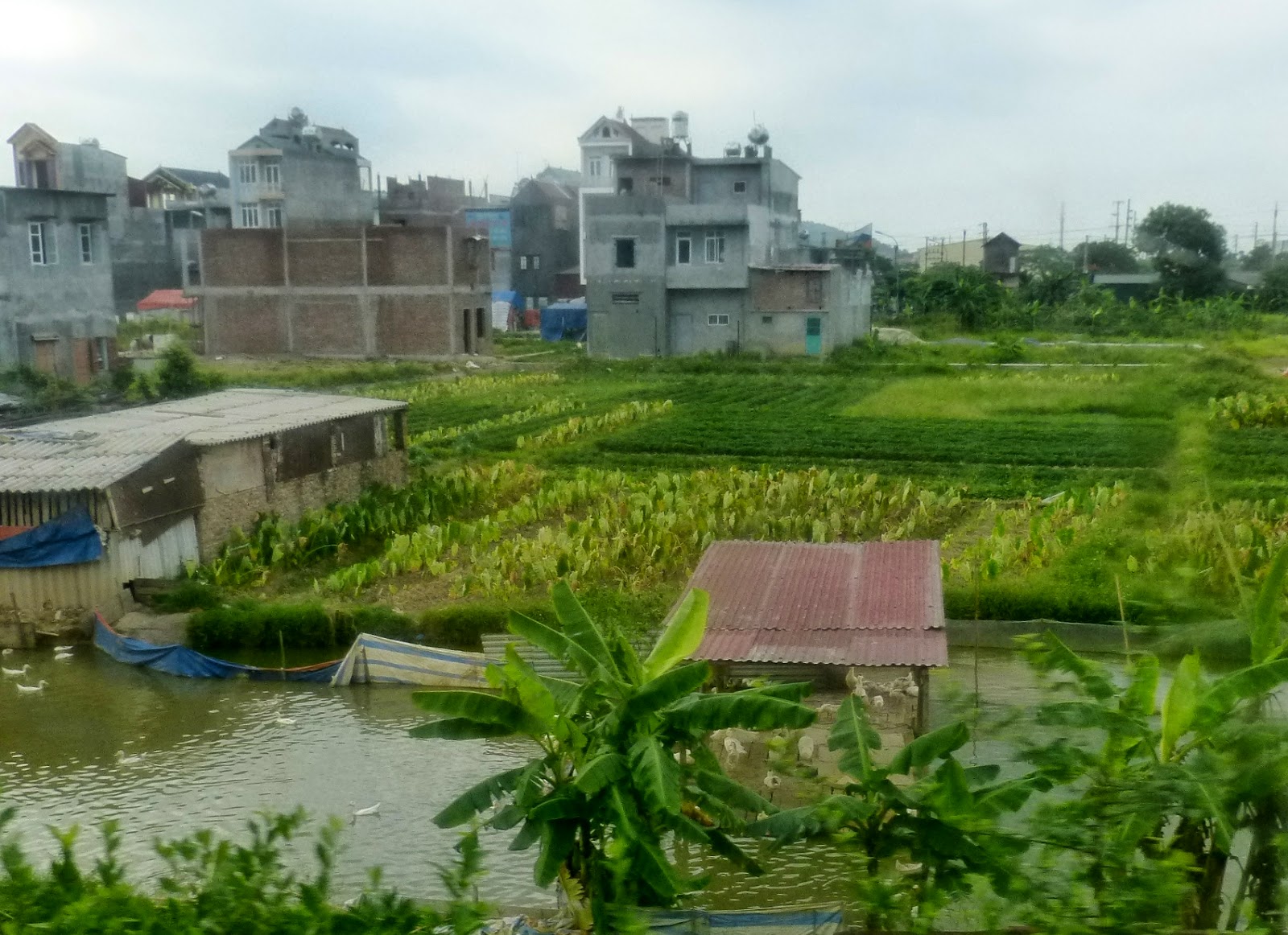 The bridges over the river at Hanoi. I realized that these would have been the bridges that the US Airforce tried to destroy by bombing during the Vietnam War.

Eventually the train reached Hanoi on time at 8:10. I left the station, found an ATM just to the right as I exited and took a taxi to my hotel, the Hanoi Elegance Ruby. 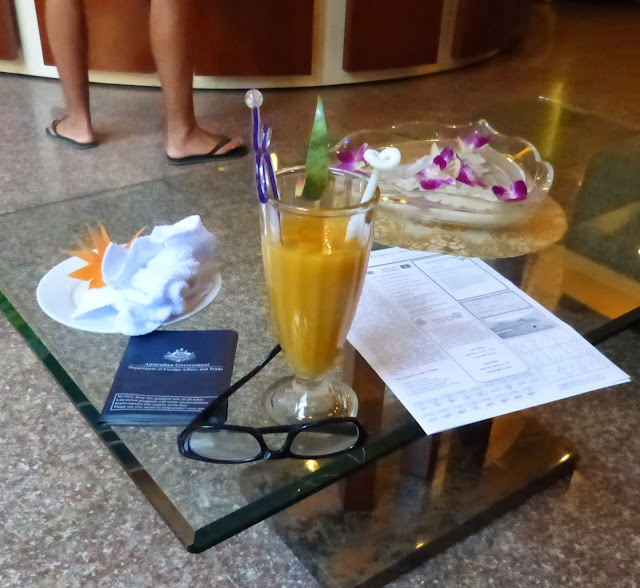 And what a welcome. They were expecting me and took my bags. Since my room was not quite ready, I was invited to sit down on a comfortable couch. You can see a plate with a cold white towel was presented so that I could give my hands and face a clean. Along came a glass of delicious freshly squeezed mango juice which was followed very quickly by another.

I was invited to have breakfast. Normally it is included in the price of the room but since I had arrived early, I would have to pay $5. I assured then that the $5 would not be a problem and shortly after was tucking into multiple glasses of the mango juice, really strong black coffee, a plate of fresh pineapple, watermelon and some sort of sweet cucumber. An omelette appeared and was quickly demolished. I could have had a croissant. 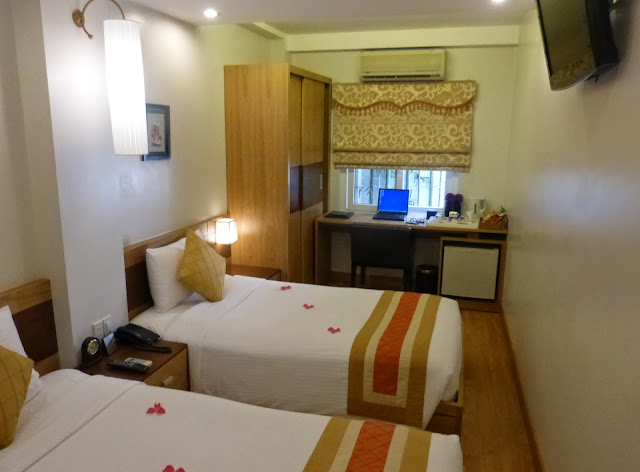 Having taken care of the inner man, they led me up to my room which is really nice and comfortable and the air-conditioning works. 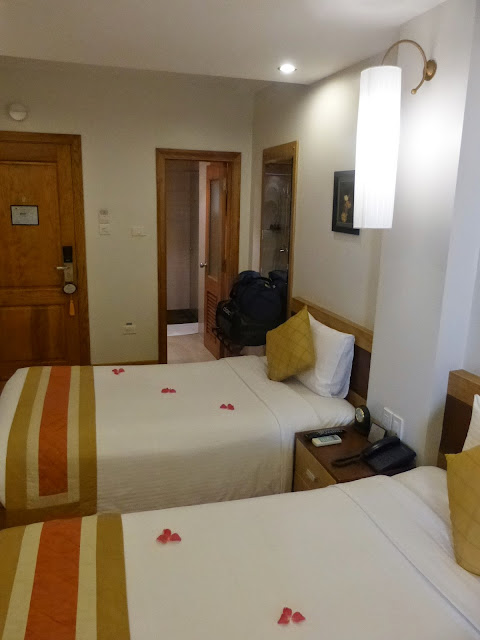 A long hot shower followed. I sent off a couple of emails to let Marianne, Robin, Anne and Clare know that I had arrived, and then had a good long nap.

I was starting to really enjoy Hanoi and Vietnam.